The Welcome to Fabulous Las Vegas sign is a Las Vegas landmark funded in May 1959 and erected soon after by Western Neon. The sign was designed by Betty Willis at the request of Ted Rogich, a local salesman, who sold it to Clark County, Nevada. 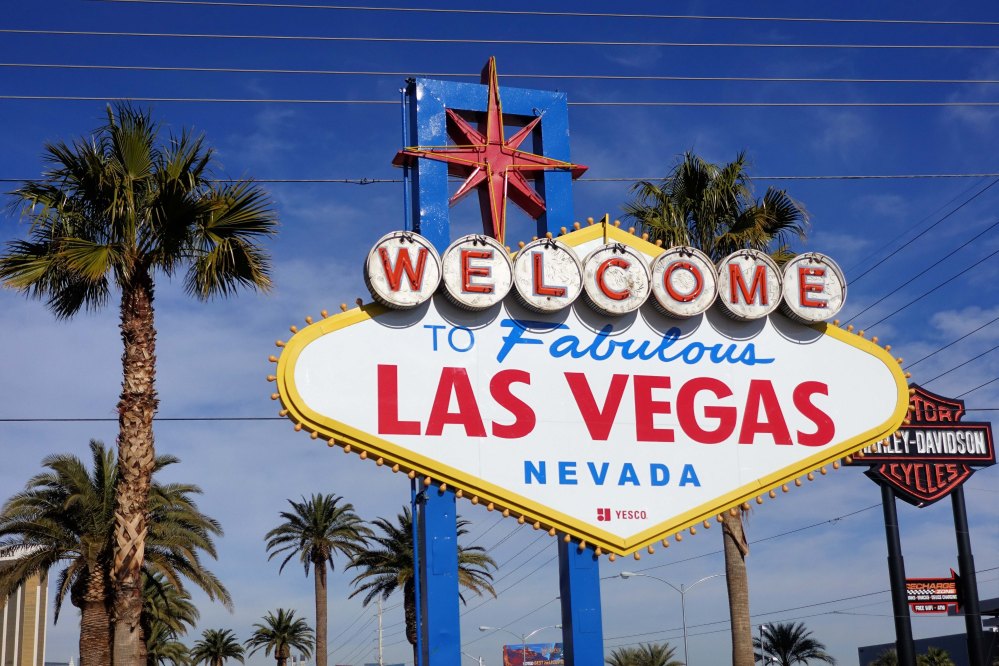 After an hour drive, we got to the Red Rock Canyon National Conservation Area!

The conservation area showcases a set of large red rock formations: a set of sandstone peaks and walls called the Keystone Thrust. The walls are up to 3,000 feet (910 m) high, making them a popular hiking and rock climbing destination. 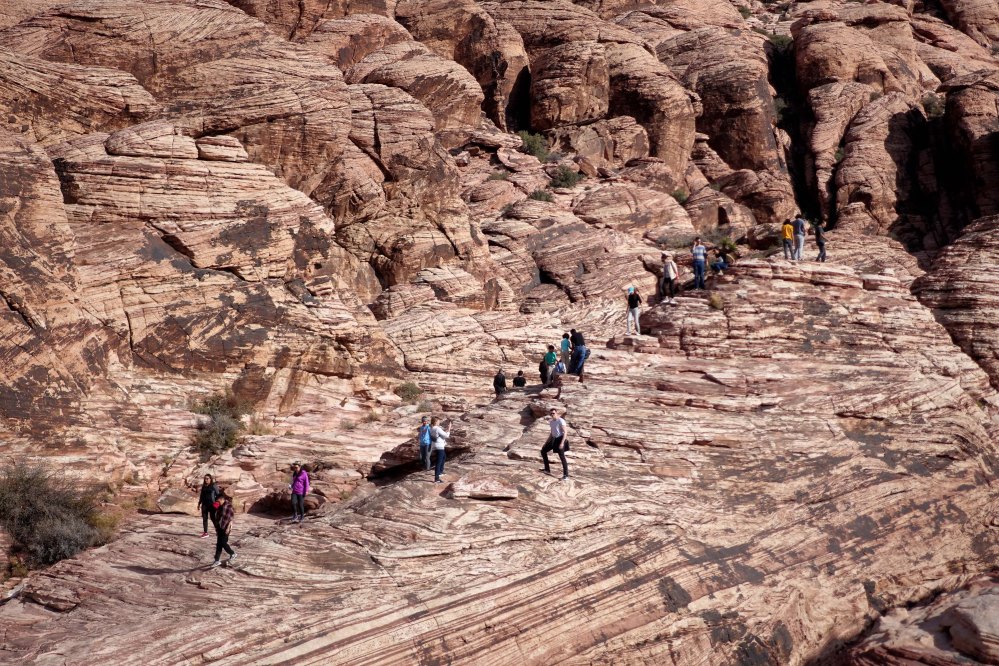 We then chose a 4 mile hike going right into the canyon. 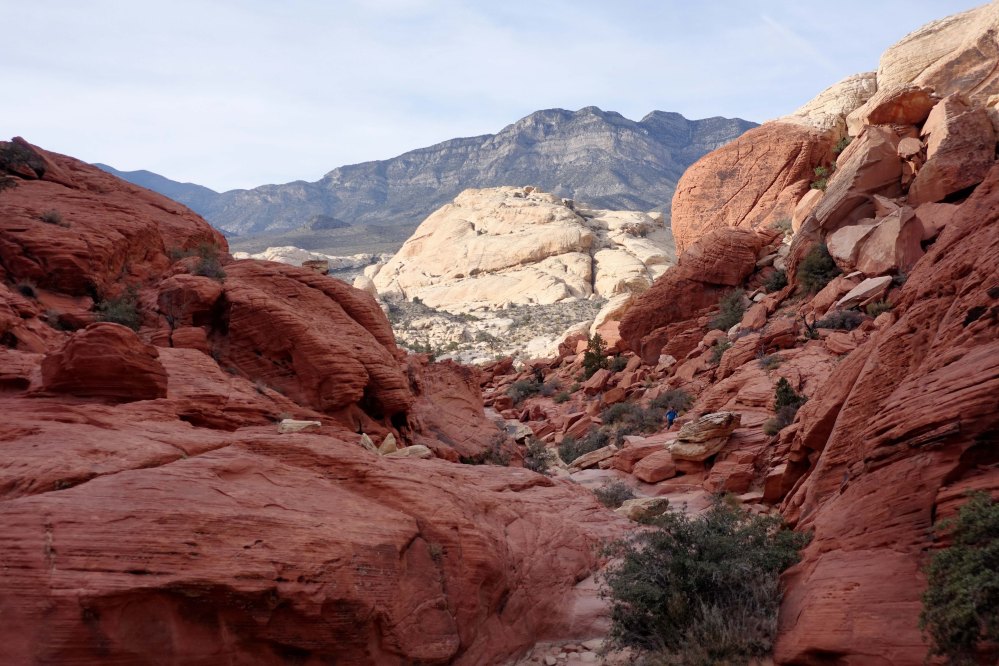 Almost at the end of the hike, you reach a natural water reservoir. This only works during the rainy season of course.

We reached the end of the hike and we were rewarded with stunning views of the Nevada desert and Las Vegas. 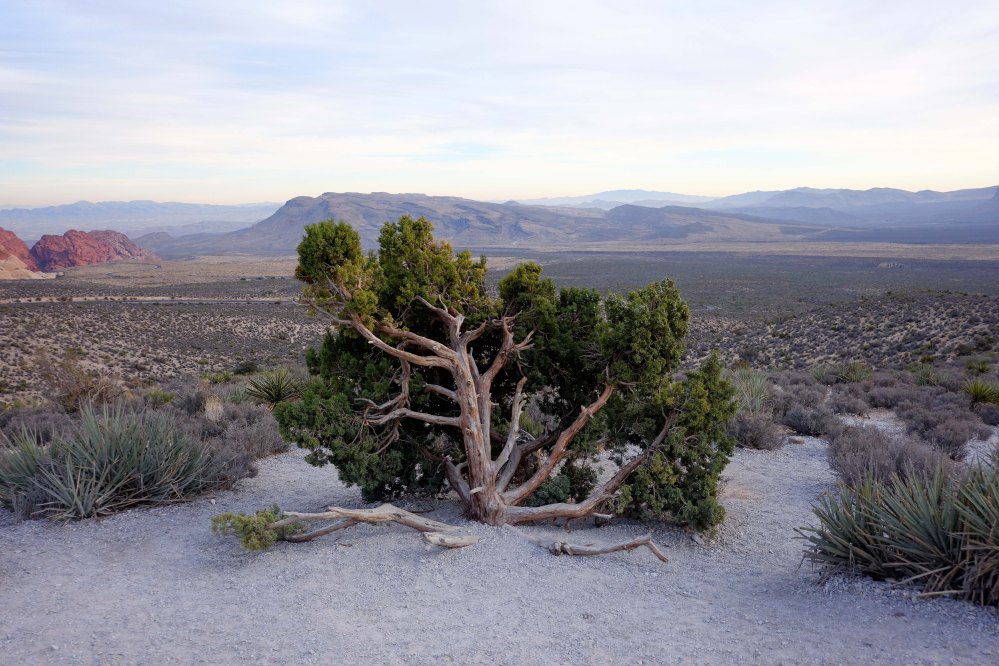 During breakfast, we decided we were going to stay one more day here as there was no rush to come home early. We booked a hotel but this time on Fremont street, which is the “old Vegas”. 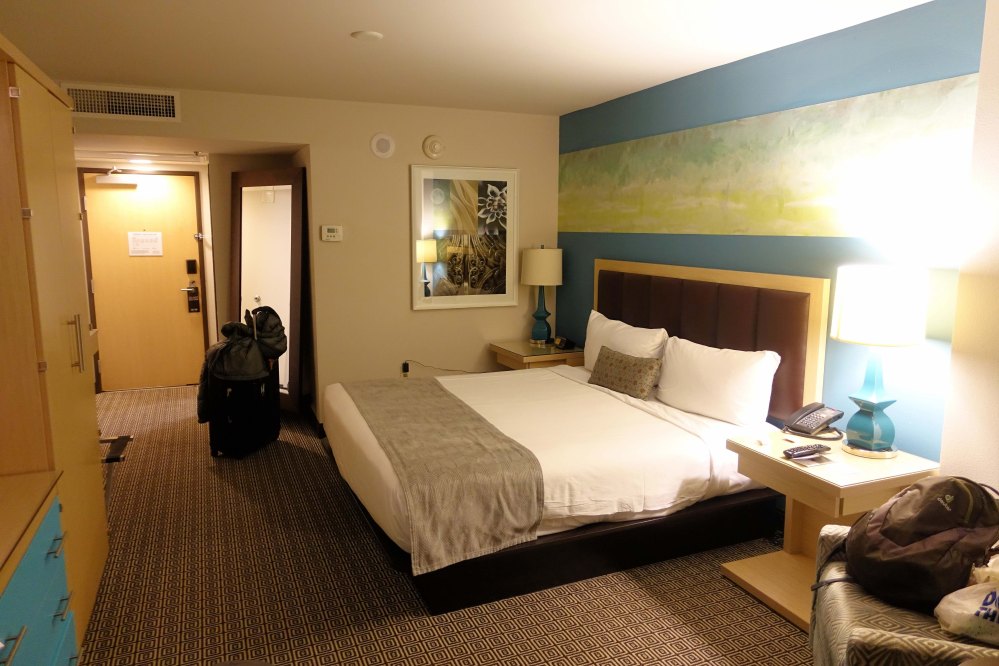 For dinner, we used a Groupon to eat at the Brazilian Steakhouse. Sounds good no? wrong!! Pampas Brazilian steakhouse was nasty!!! bad meats, bad salads, and to make it even worse, we ordered a bottle of wine and we got plastic cups instead of wine glasses. Avoid this place!

We walked around some other hotels! this is the beautiful Cosmo. 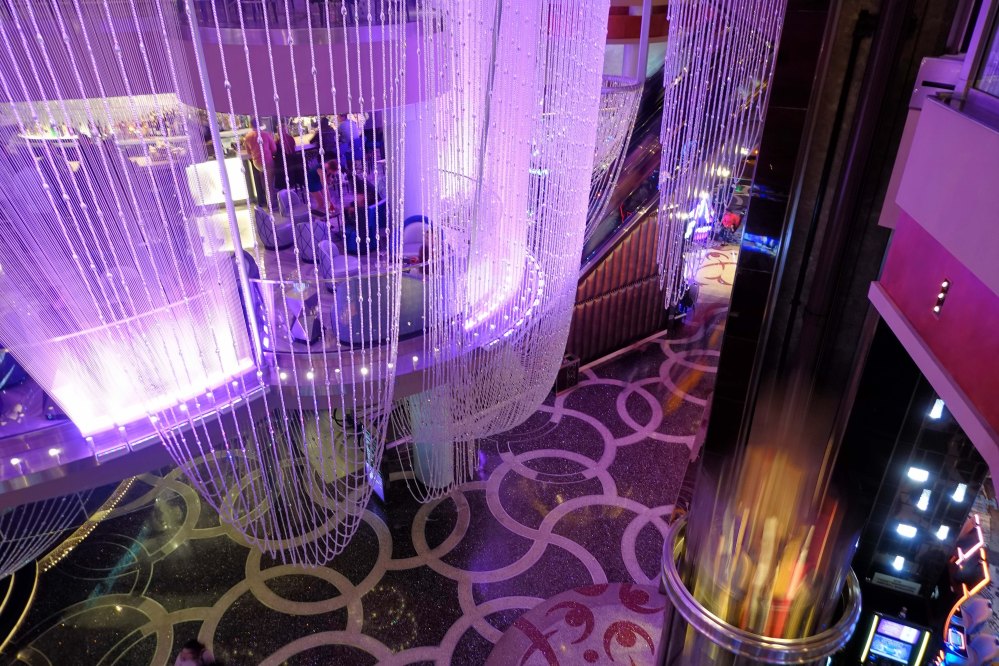 They had an ice rink too.

We walked to the Bellagio’s Conservatory and Botanical gardens where they always create majestic flower sculptures. 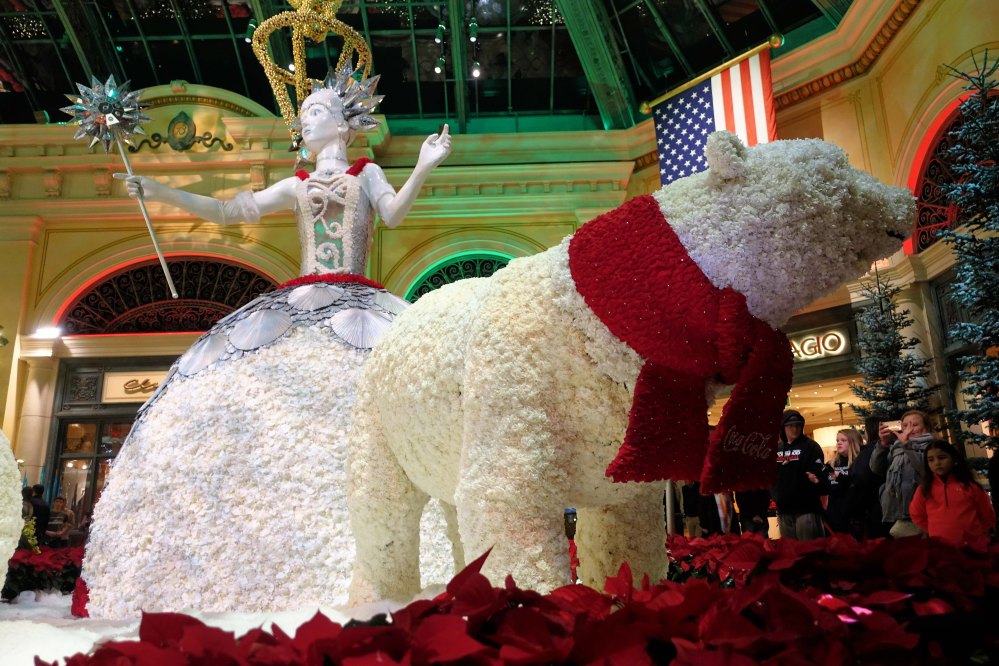 We stayed at the Bellagio to enjoy the fountain show as well. Always impressive but this time they had a bad song choice. 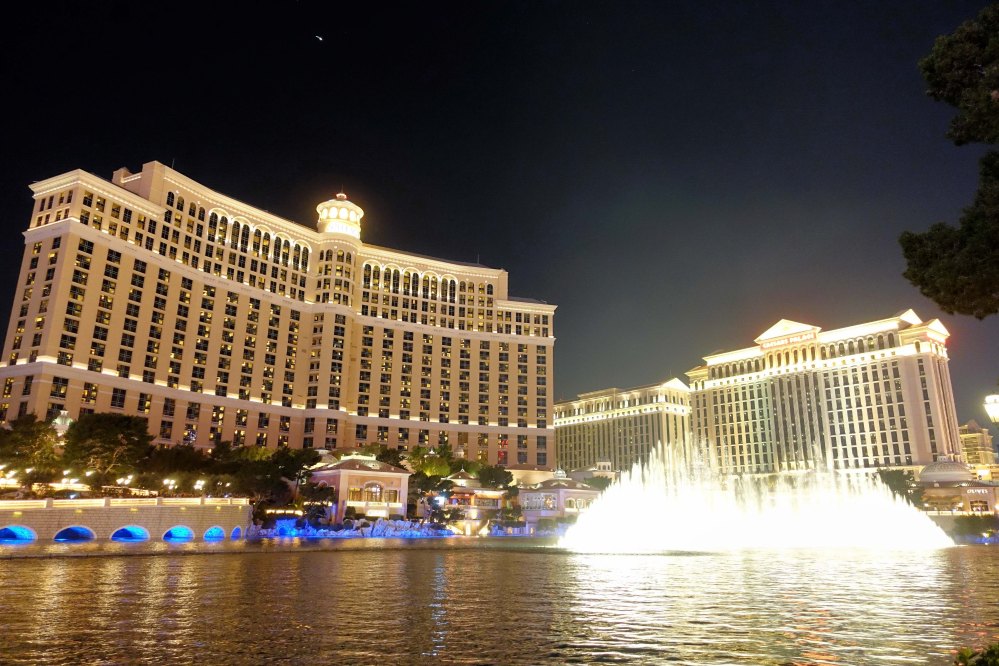 The next morning we visited the Container Park in Downtown. Super chill place to enjoy a nice breakfast and walk around visiting the shops. 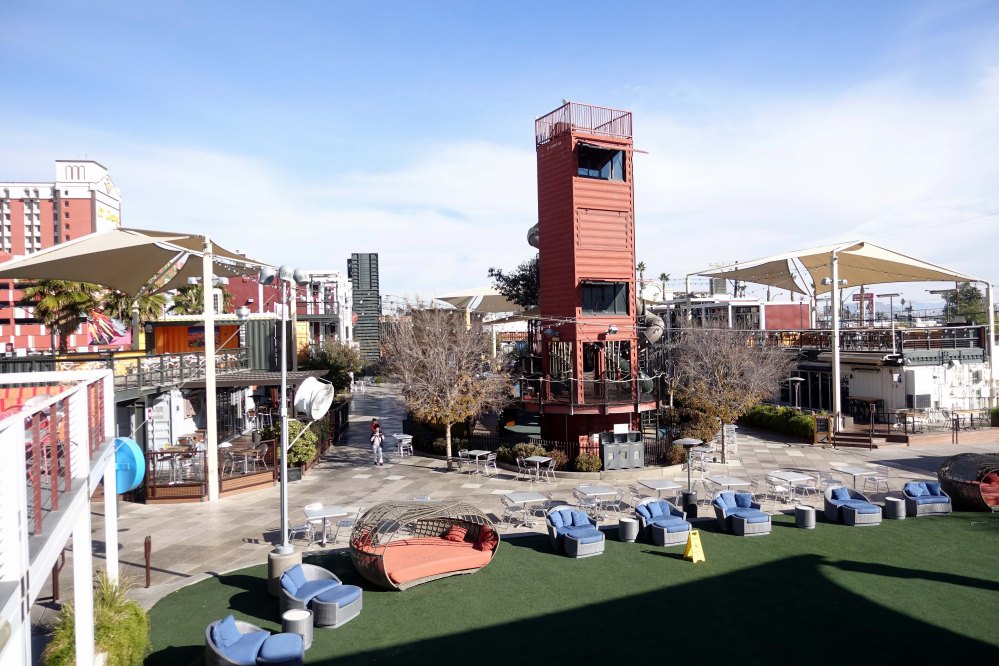 Eitan wanted to go to the Mob Museum (officially the National Museum of Organized Crime and Law Enforcement),  which was AMAZING!! it takes around 3 hours to visit it and is dedicated to featuring the artifacts, stories, and history of organized crime in the United States, as well as the actions and initiatives by law enforcement to prevent such crimes. 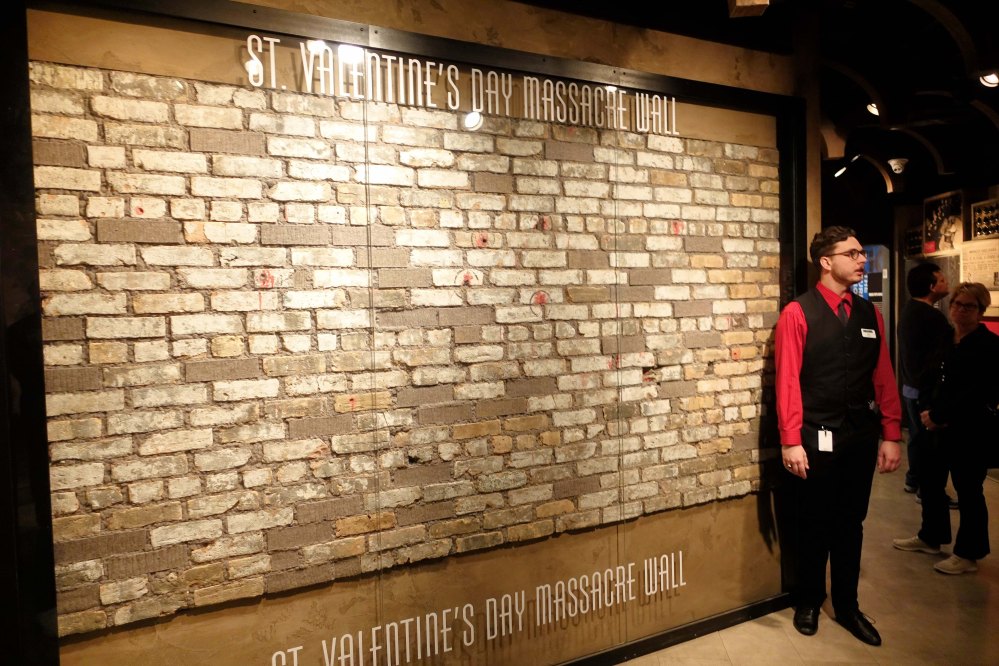 They had Al Copone’s revolver!!

They also sentenced Sarah to the electric chair due to her horrible crime of eating seaweed snacks and then trying to kiss Eitan with her breath! 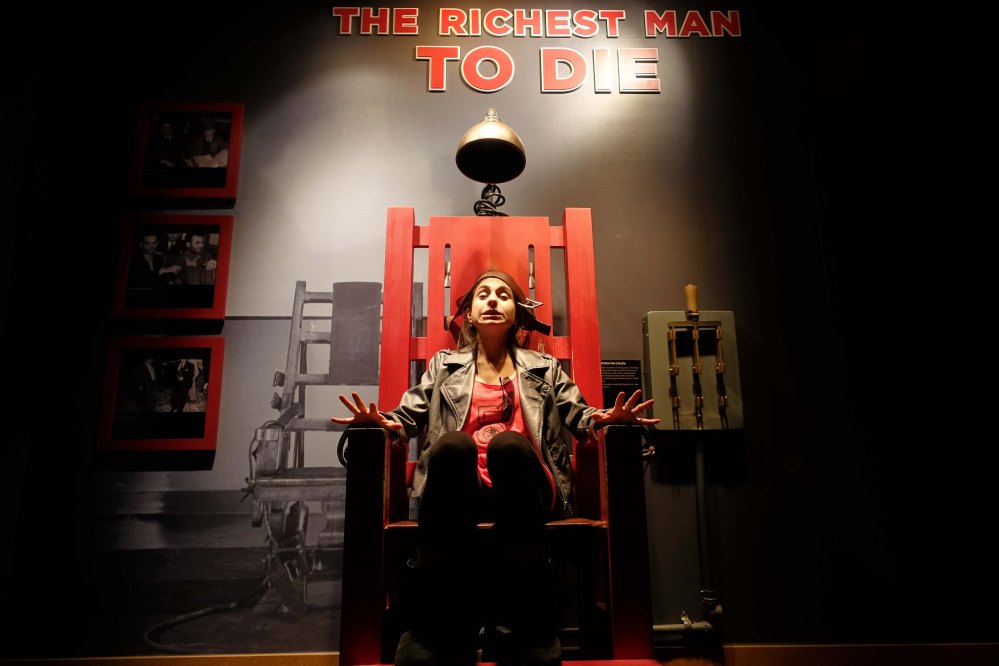 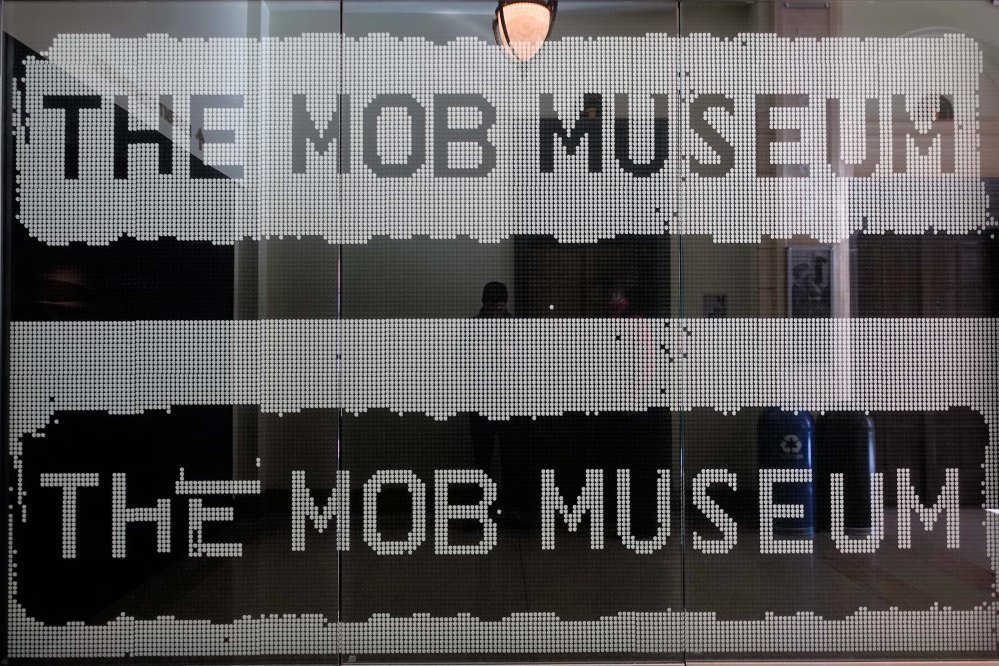 We heard that the Pinball hall of fame is on the outskirts of Vegas. So, of course, we went to spend a few quarters there.

This place is magical, they have hundreds of pinball machines from all decades. Including super special limited edition ones that you can play for cheap.

All machines have an explanation of its history. It was very enlightening! Now Eitan wants to buy a pinball for the garage.

We then headed back to San Diego, but not without stopping at the Mad Greek Cafe, if you have ever driven to Vegas, you probably have seen at least 500 billboards advertising this place. I guess they won? also, the other dining options are nasty fast food placed. The food was surprisingly really good and served as a very romantic New Years ever dinner.