We planned for an early morning to beat the crowds at the Hoover Dam, but we made the costly mistake of stopping in a crowded restaurant on our way. Breakfast took 2 hours, so by the time we got close to the Dam, this was the traffic….

After a security check (after 9/11 they increased the security of this place tremendously), Sarah ran to buy the tour tickets while Eitan looked for a parking spot. There are 2 types of tours: a 30-minute tour to the powerplant that leaves every 15 minutes, and the 1-hour tour to the inside of the Dam which you cannot reserve in advance. You can guess which tour Eitan chose, which means the earliest tickets were for the tour at 3:30 pm!! (it was 11:00 am).

We had several hours to kill, luckily the Dam offers way more than the tours. They have exhibits explaining everything you need to know about the dam, which is one of the world’s most amazing engineering wonders.

At the turn of the 20th century, farmers sought to divert the Colorado River to budding Southwestern communities via a series of canals. When the Colorado broke through the canals in 1905, creating the inland Salton Sea, the job of controlling the raging river fell to the U.S. Bureau of Reclamation.

Hoover Dam is a concrete arch-gravity dam in the Colorado River, on the border between the U.S. states of Nevada and Arizona. It was constructed between 1931 and 1936 during the Great Depression and was dedicated on September 30, 1935, by President Franklin D. Roosevelt. 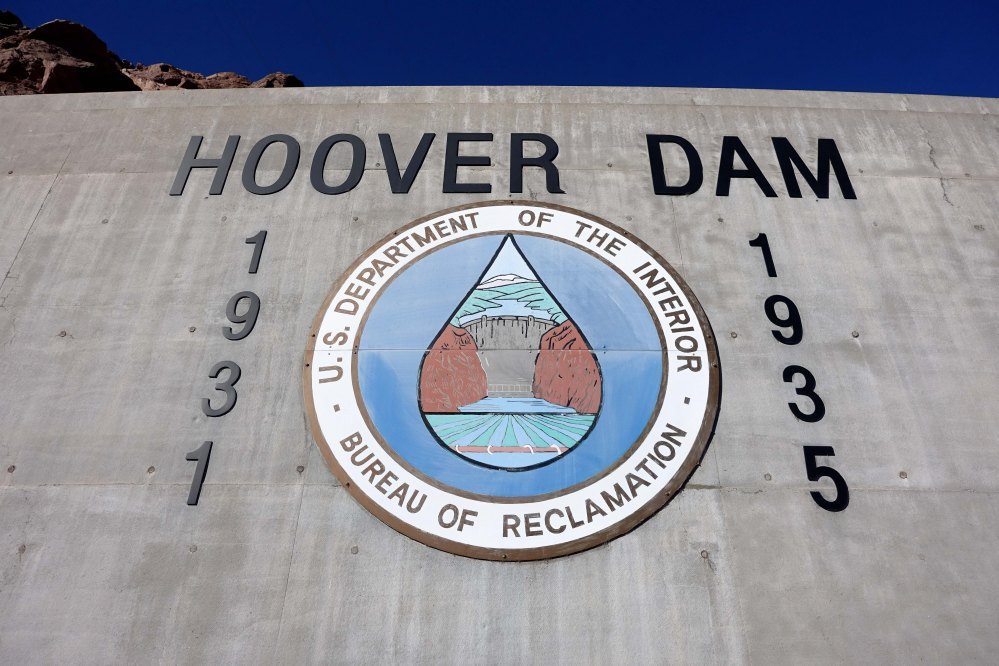 Originally known as Boulder Dam from 1933, it was officially renamed Hoover Dam by a joint resolution of Congress in 1947. Its construction was the result of a massive effort involving thousands of workers, and cost over one hundred lives. The dam was named after President Herbert Hoover. 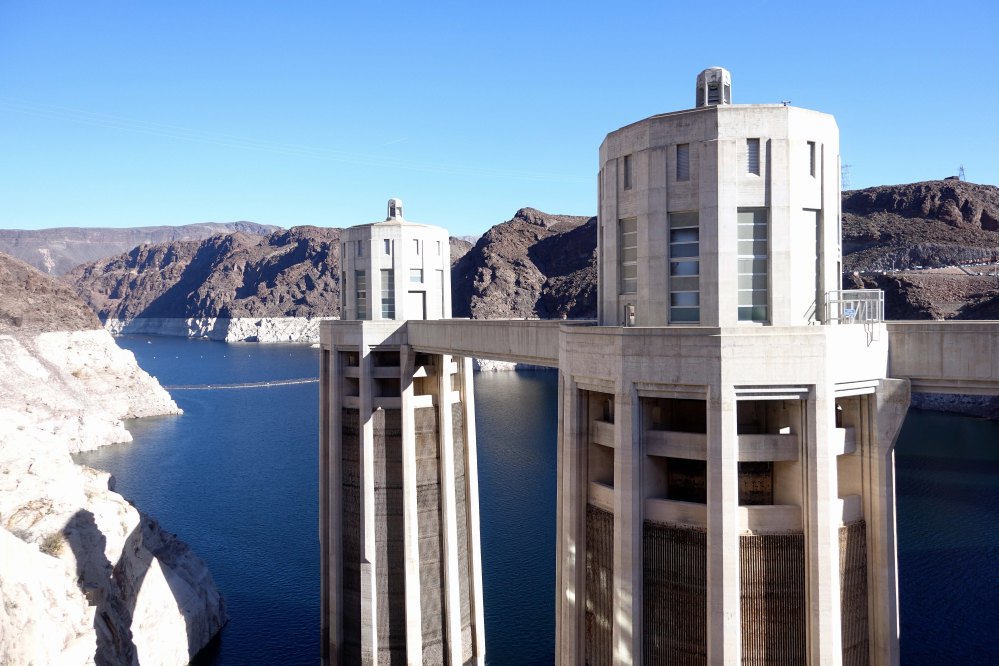 Such a large concrete structure had never been built before, and some of the techniques were unproven. The torrid summer weather and lack of facilities near the site also presented difficulties. Nevertheless, Six Companies turned over the dam to the federal government on March 1, 1936, more than two years ahead of schedule. 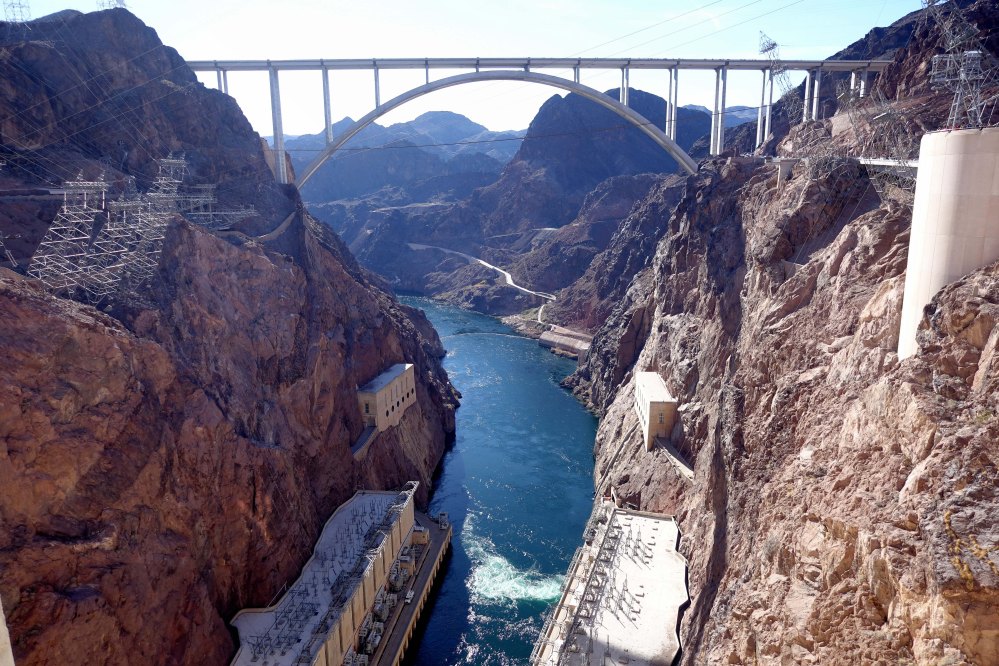 Looking down is not for the weak!

Hoover Dam impounds Lake Mead, the largest reservoir in the United States by volume (when it is full). The dam is located near Boulder City, Nevada, a municipality originally constructed for workers on the construction project, about 30 mi (48 km) southeast of Las Vegas, Nevada. 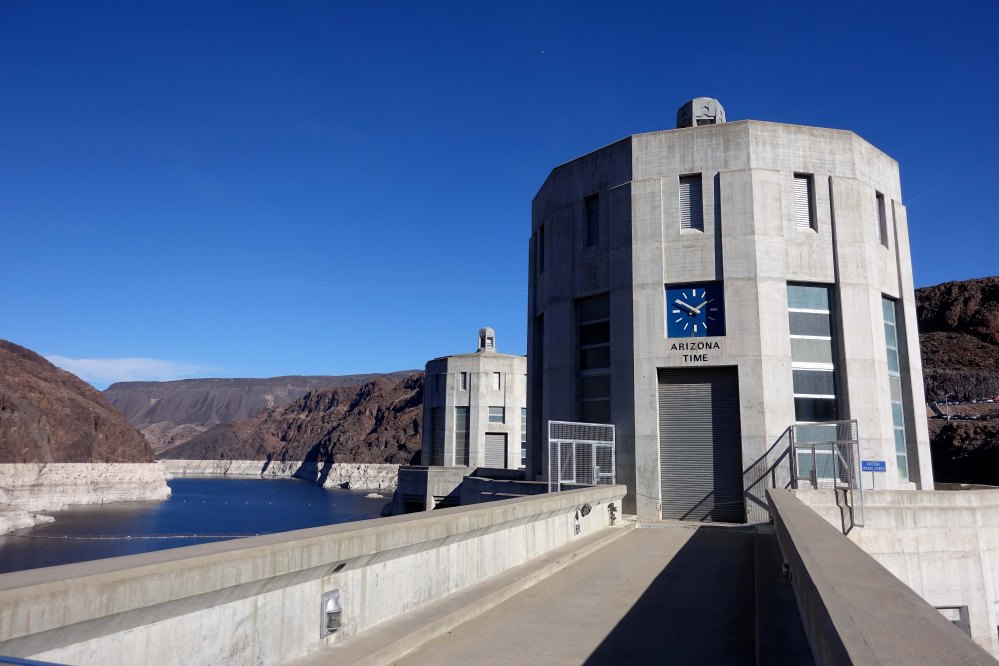 These are the generators at the bottom of the dam that we will be visiting with the tour.

Right before the tour starts you watch a movie of how they built it. Then, they have a small exhibit with a small diorama of how did it look halfway through the construction. 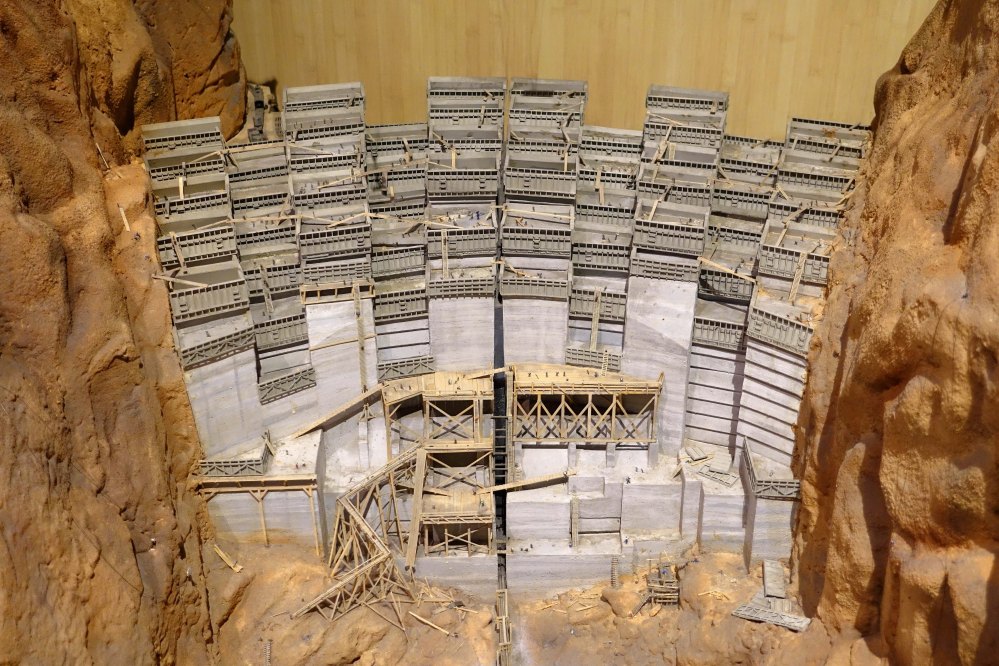 The tour started by taking an elevator and going all the way down the Dam, our tour guide was really funny and even included some 9/11 jokes. 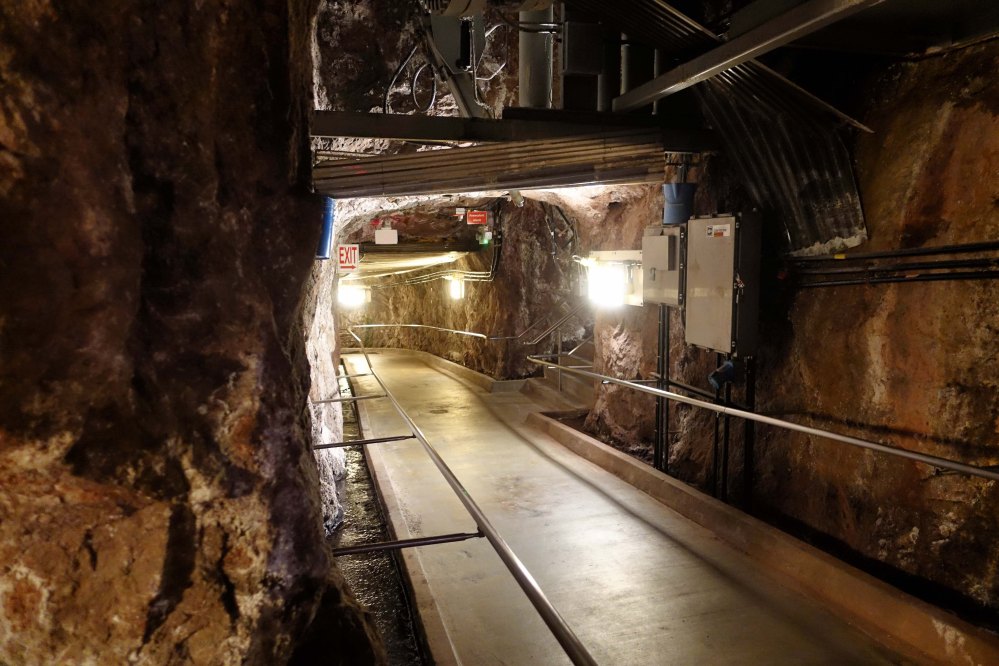 The generators room was the first stop. The dam’s energy helps keep the lights on for customers in California, Arizona, and Nevada and creates enough power for 1.3 million people.

This is a photo of the location of the dam before it was built. Bureau director Arthur Powell Davis in 1922 outlined a plan before Congress for a multipurpose dam in Black Canyon. The dam would not only control flooding and irrigation, it would generate and sell hydroelectric power to recoup its costs. Still, the proposed $165 million price tag concerned some lawmakers, while representatives of six of the seven states in the river drainage area—Colorado, Wyoming, Utah, New Mexico, Arizona and Nevada —worried that the water would primarily go to California.

Our next stop was the tunnel to one of the vents on the face of the Dam, specifically the lower left vent.

One by one we took the camera out of the vent to take a once I n a lifetime photo facing up!!

The Bureau of Reclamation, the department subsidizing the project, supplied a whopping 3.25 million cubic yards of concrete for the dam itself, plus another 1.11 million cubic yards for the power plant and additional facilities. This quantity of concrete would be enough to build 3000 miles of road—a full-sized highway from one end of the United States to the other. 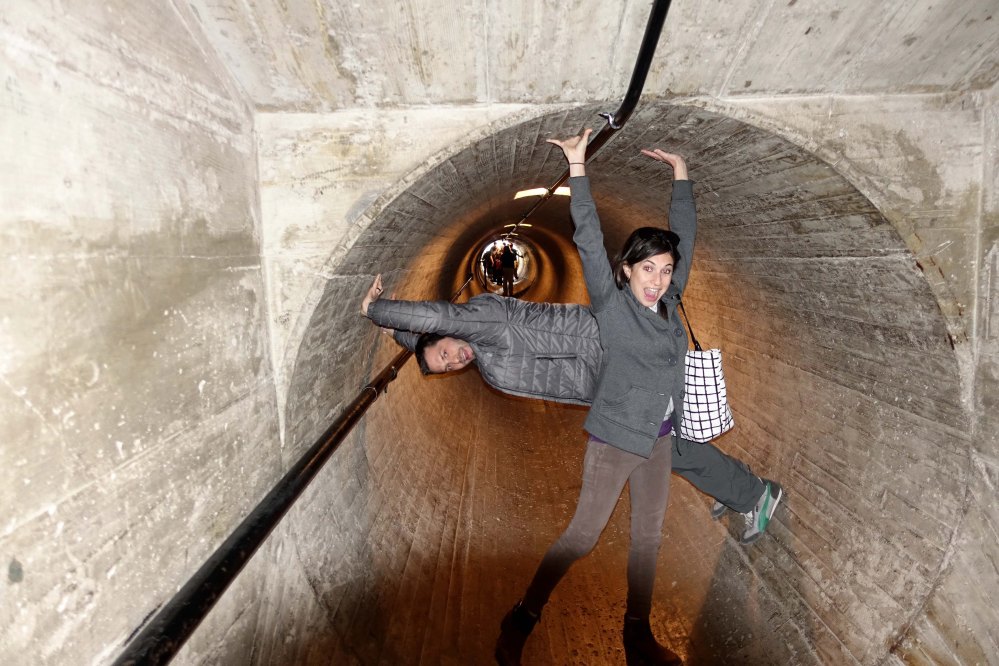 The next stop was the stairs that were used before the elevator was constructed! definitely claustrophobic.

They had an earthquake sensor on the floor, they specifically request not to kick it as it might trigger a mass evacuation of the dam! 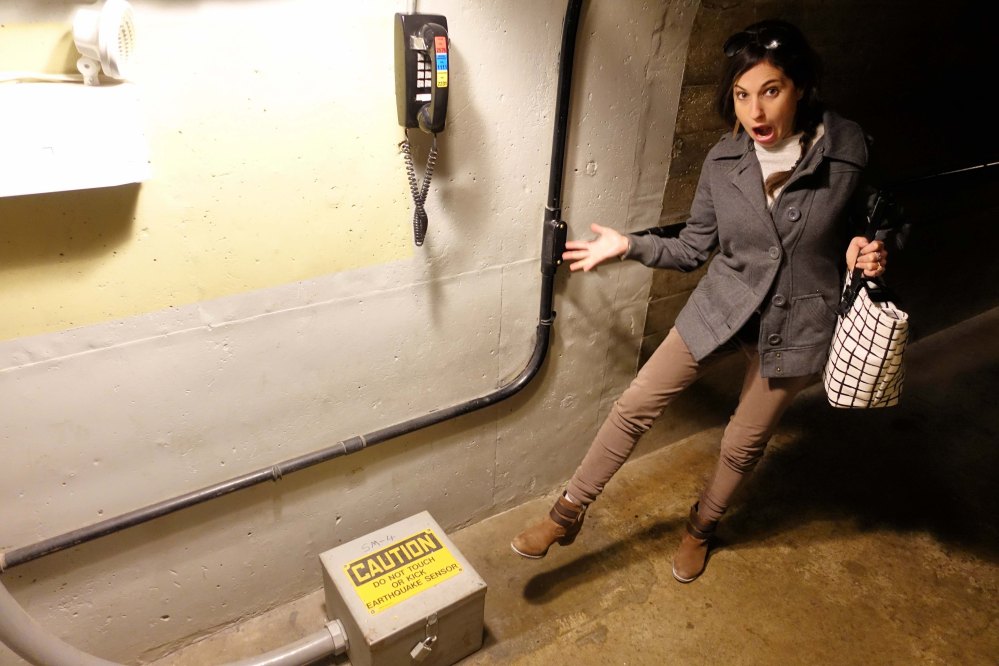 After the tour, the guide suggested we walked across the Mike O’Callaghan–Pat Tillman Memorial Bridge. The views from here were stunning!

In 1939, the United States government learned of a pair of German Nazi agents’ scheme to bomb the Hoover Dam and its power facilities. Destruction of the dam itself was not the central goal, but hampering its energy production was a key piece of the agents’ plan to undercut California’s aviation manufacturing industry. To ward off aerial attacks, authorities considered camouflaging the Hoover Dam with a paint job or even building a decoy dam downstream from the real thing. Ultimately, the Germans managed to get as far as conducting onsite investigative work before their ploy was quashed. 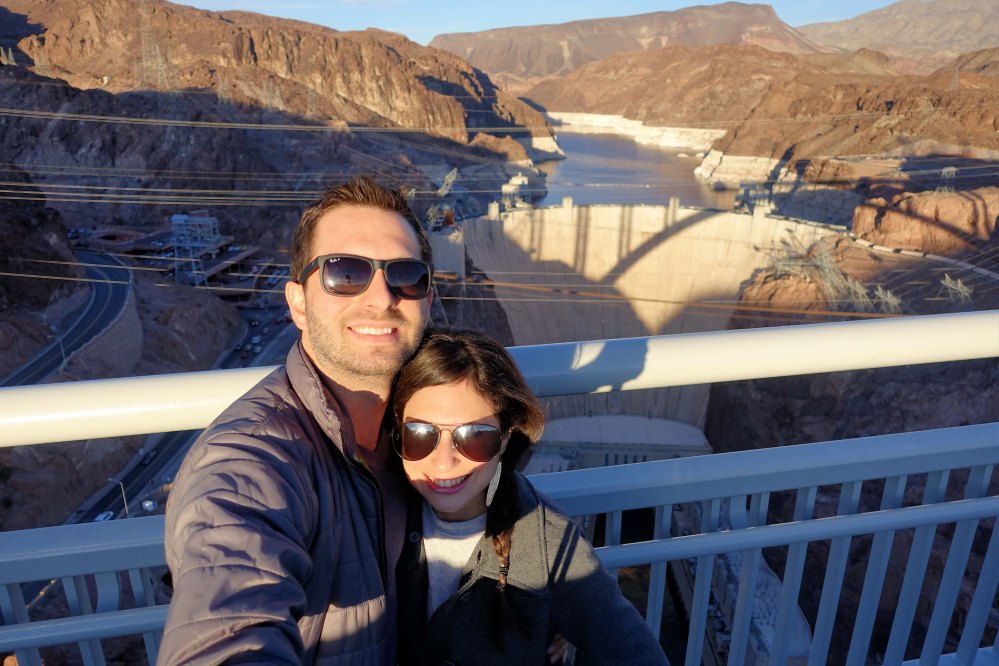 On the way back there is a stop to see Lake Mead.

We finally made it back to Vegas and we walked more to different hotels that we hadn’t  seen the previous nights. We started at the Cesars Palace. 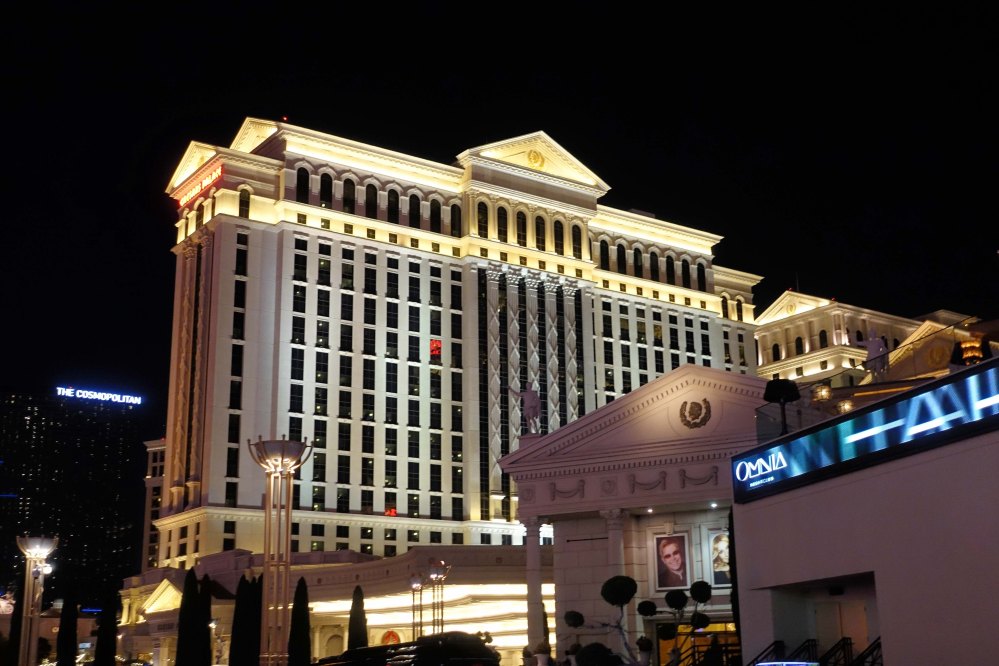 The swimming pool here is majestic! 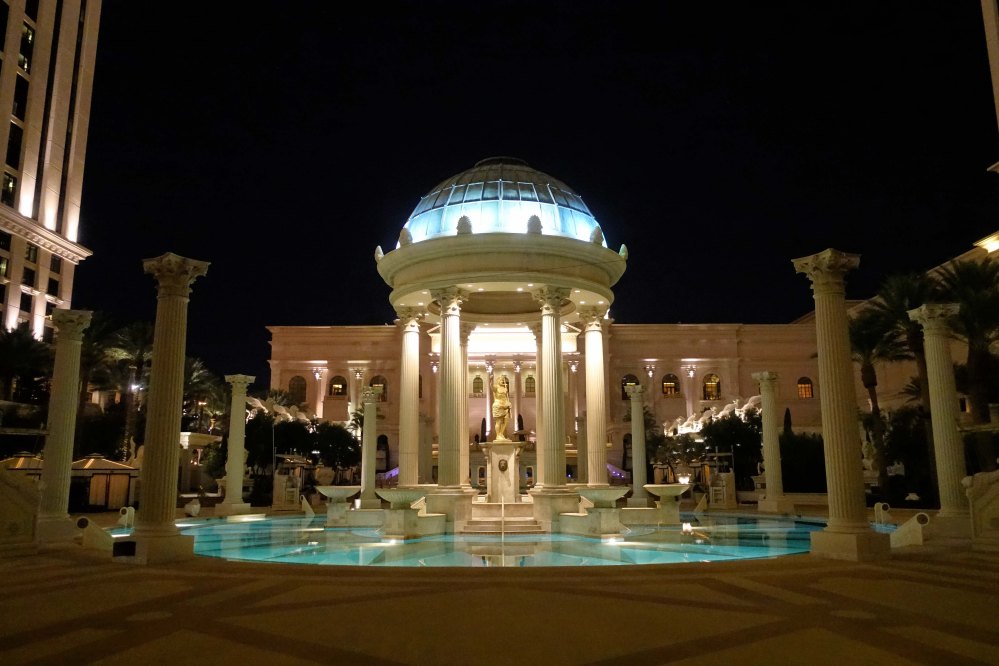 The next hotel, the Ballagio, had these amazing glass sculptures on the roof.

Sarah “the coupon master” found a great deal to eat in one of the busy fancy restaurant on the strip. The deal included a meat and cheese plate and a bottle of wine.

Our next stop was the Paris Hotel, absolutely beautiful and looks very realistic!

Original plans for the Eiffel Tower called for a full-scale replica, however that would have interfered with the nearby McCarran Airport and designers, therefore, reduced it to approximately 1:2 scale.

It was built at an estimated cost of $760 million. 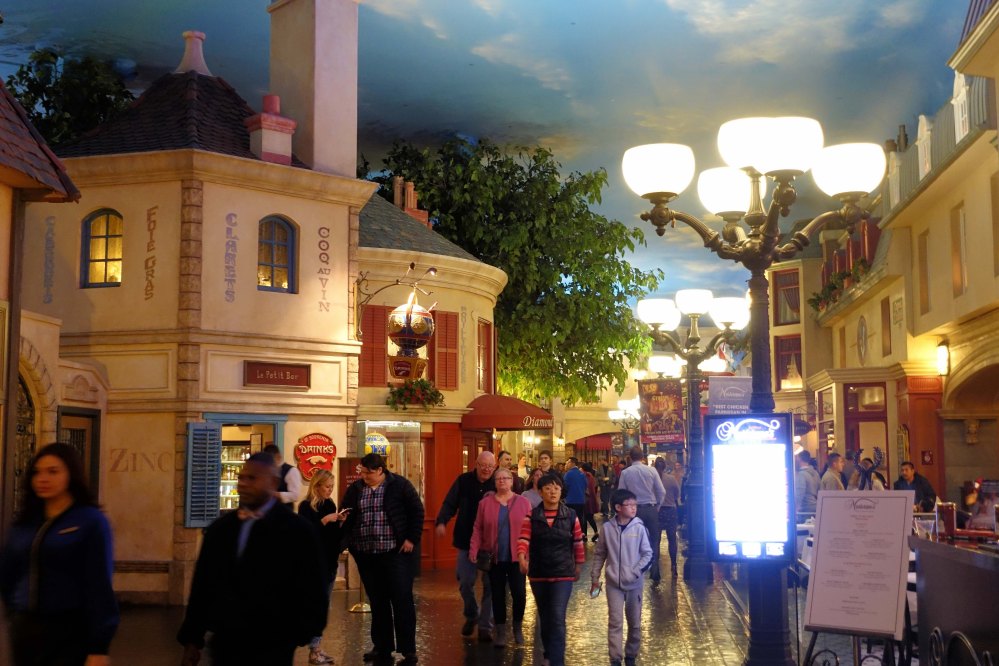 Does this ice cream look good? well, it is actually soap! we found a soap shop that imitates everyday articles, but everything is made out of soap. 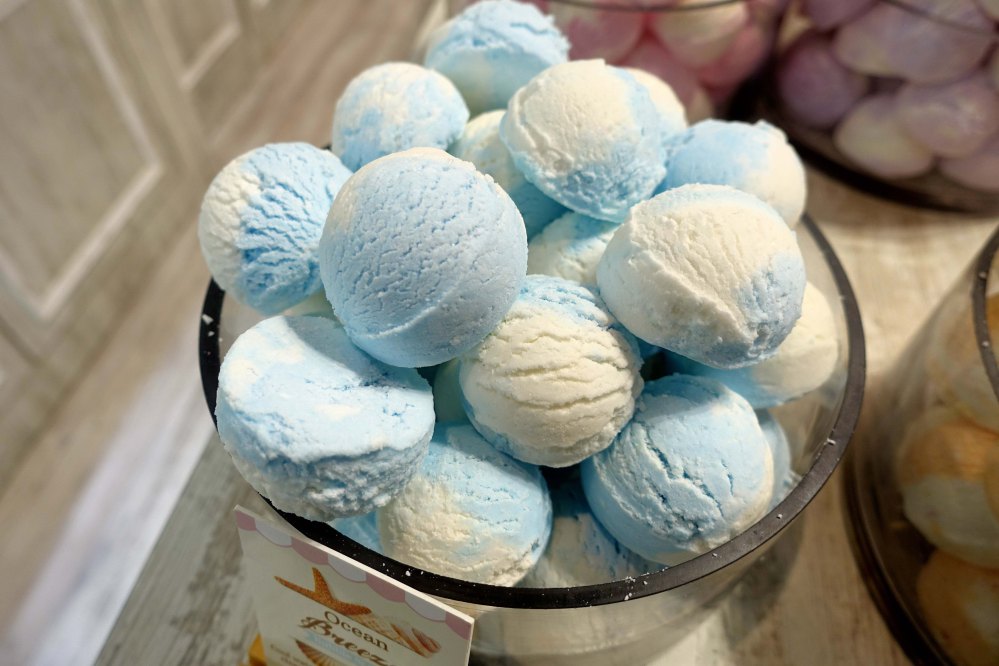 They even let you wash your hands with $70 a bottle bath salts to exfoliate and all the other things that only woman understand.

Bonus Pic Of The Day: At the end of the night we finally stopped to do what we do best… gamble! we spent a total of $4 on the Jackpot machines. The fun lasted us about 2 minutes and we had to cash out our multimillionaire earnings!