After visiting the Predjama caves we drove a couple more hours to Piran, our last stop in Slovenia. Sitting pretty at the tip of a narrow peninsula is everyone’s favorite town on the Slovenian coast. Its Old Town – one of the best-preserved historical towns anywhere on the Adriatic – is a gem of Venetian Gothic architecture. It’s hard not to fall instantly in love with the atmospheric winding alleyways, the sunsets, and the seafood restaurants.

There are no cars allowed in Piran, so after parking in one of the structures outside of the town, there is a shuttle bus that drops you off right in front of the main plaza.

It is right on the border with Italy, until the mid-20th century, Italian was the dominant language, but was replaced by Slovene as demographics shifted.

After dropping our bags in the hostel we booked, which happened to be perfectly located a couple of streets away from the main plaza, we walked along the marina to get some dinner while enjoying the sunset.

Piran is a destination for high-end tourism, which means the restaurants are super pricey. We walked further down the coast trying to get away from the tourist area in order to find a cheaper place. We found this little cute Italian restaurant, but unfortunately, it was disgustingly bad. It was an unfortunate surprise as you could actually see Italy from where we were sitting, so we assumed the food couldn’t be bad.

The next morning we drove to the Skocjan Caves, ranking among the most important caves in the world, Škocjan represents the most significant underground phenomena both on the Karst Plateau and in Slovenia.

The Skocjan caves are managed by a government agency so they don’t allow photos inside as the flash may allow bacteria to grow and destabilize the cave ecosystem, so the photos inside the cave were taken from the internet. 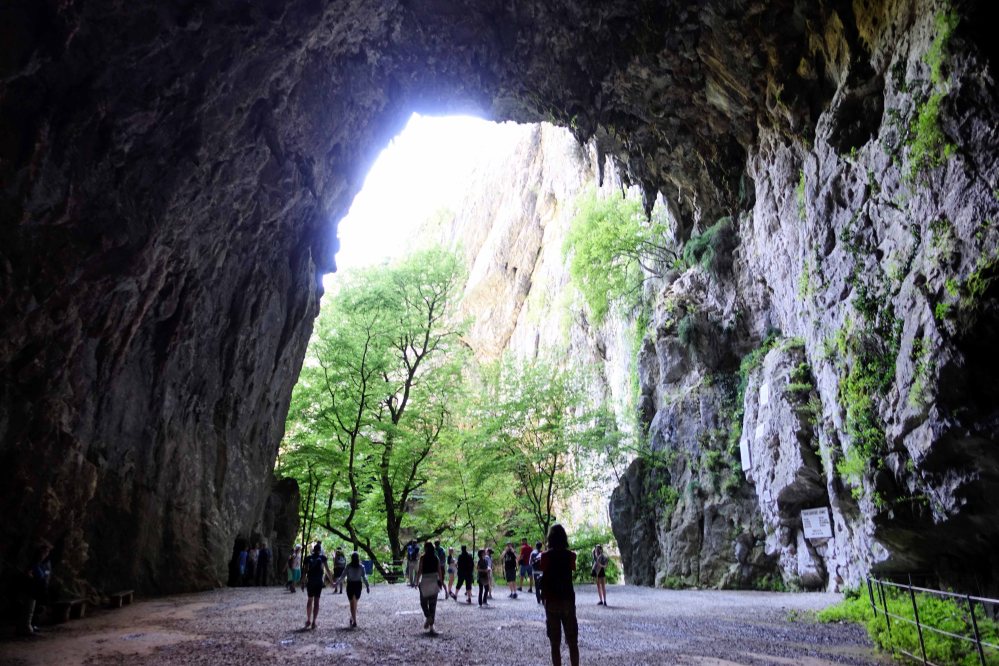 We were about to skip this cave as we thought that both caves, Skocjan and Predjama were going to be similar, but we were so wrong. Both are very different and worth the visit.

Again, you need a guided tour to visit the cave. The visit takes around 1.5 hours and takes you around a world that looks as if it was taken straight from the Lord Of The Rings. 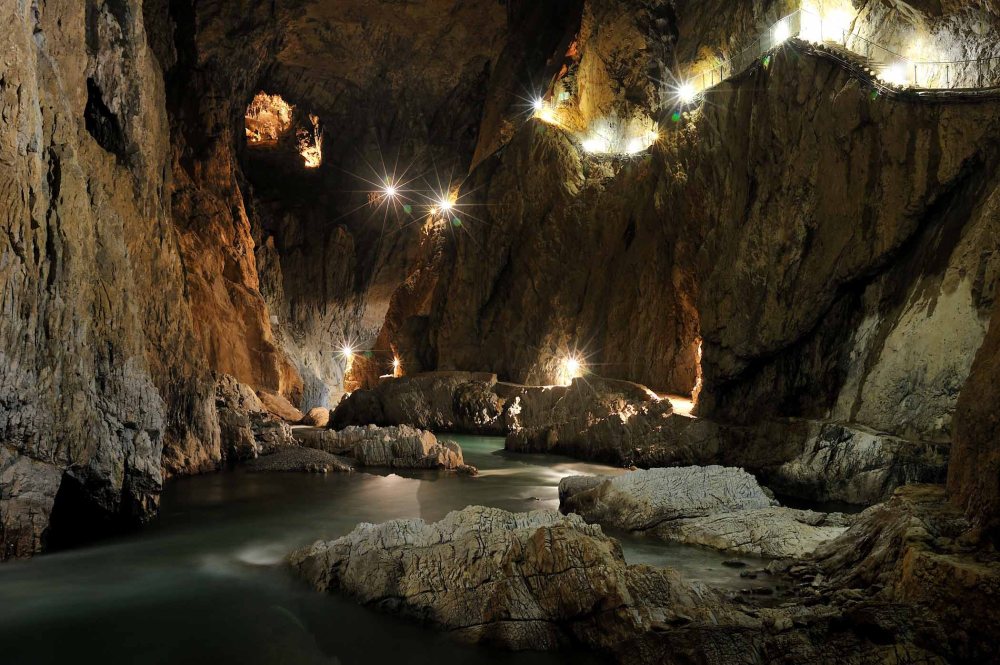 At the end of the tour they let you walk on your own in the last section of the cave. 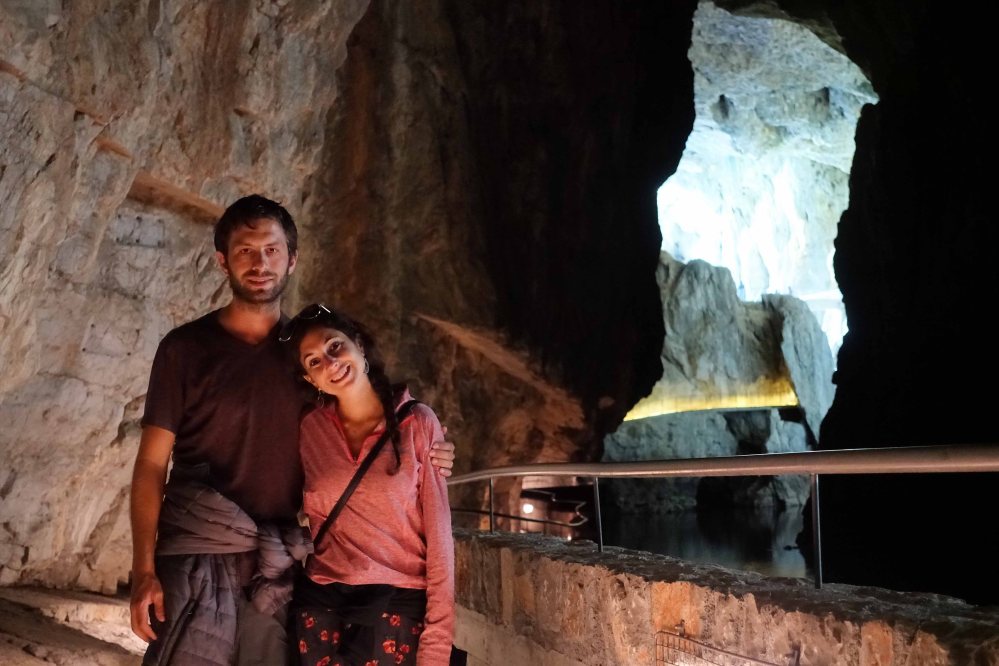 It is full of beautiful waterfalls. 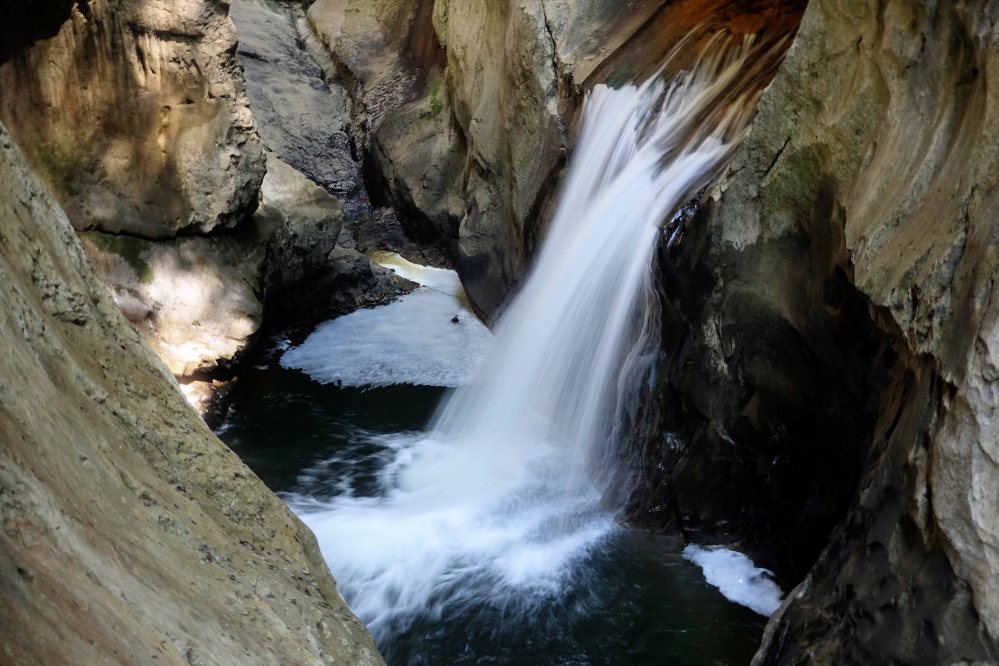 After that amazing visit we drove back to Piran to drop off the rental car right outside the city. Instead of taking the shuttle, we decided to walk the couple miles back to town. We found the very famous Portoroz beach full of locals swimming and sunbathing. We didn’t have our swimming suits with us, but we ate at the beachfront restaurant and enjoyed a couple hours of people watching, our relationship’s national sport.

After lunch, we started our walk back.

A cobbled street leads from behind the Venetian House to Piran’s hilltop cathedral, baptistery and bell tower. Fun fact: On 24 October 2010, Slovenia became the first European former communist country to elect a black mayor. The physician Peter Bossman, who came from Ghana in the late 1970s, was elected mayor of Piran.

The cathedral was built in baroque style in the early 17th century, on the site of an earlier church from 1344. 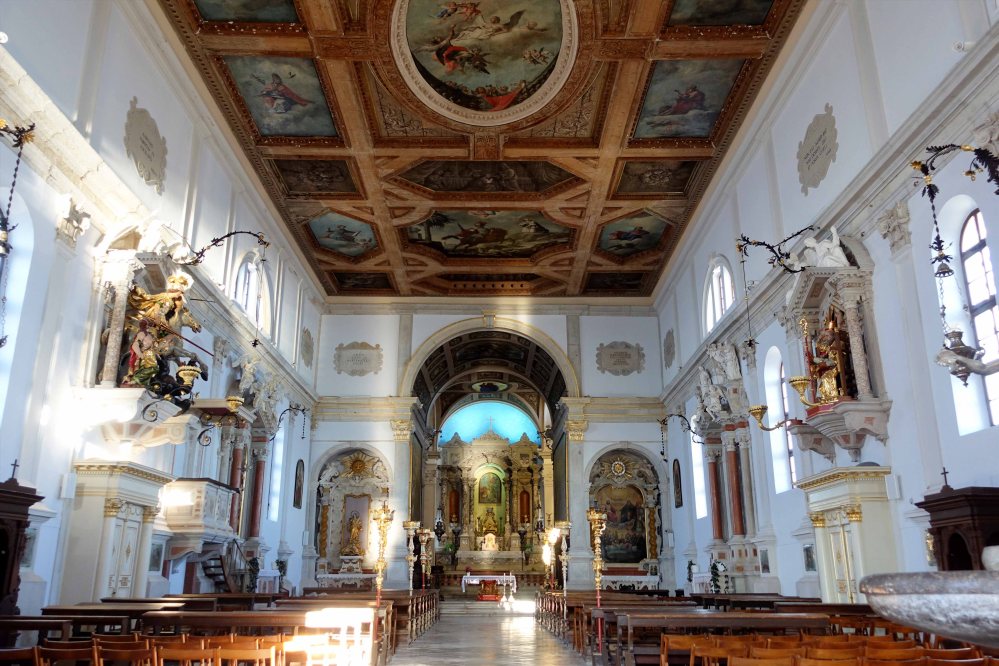 You can see Italy from here (left of the picture). Piran was heavily influenced by the Venetian Republic and Austria-Hungary, therefore the monuments differ greatly from those in inner parts of Slovenia. 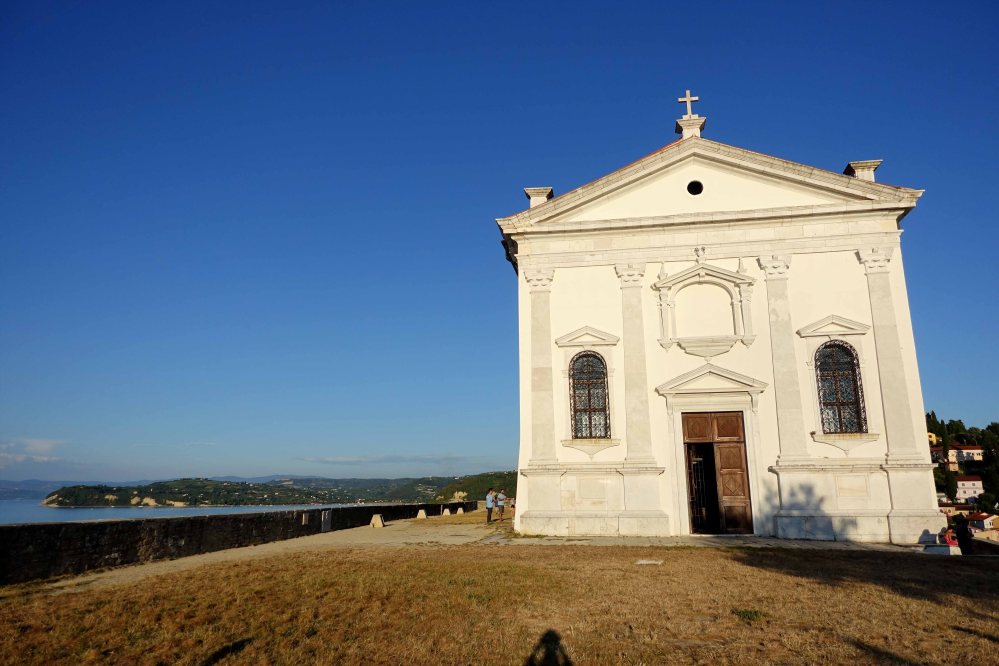 There are a couple more sights to see in this city, but we decided to just walk around the narrow streets and enjoy a relaxing evening instead.

At the end of the peninsula we found the Punta Lighthouse. The street leading to it is full of traditional and very expensive restaurants.

Punta, the historical ‘point’ of Piran, still has a lighthouse, but today is small and relatively modern. Attached to it, however, is the round, serrated tower of the Church of St Clement.

The sunset here was spectacular, easily one of the top 3 sunsets of the entire the trip so far.

It was so beautiful we sat in one of the restaurants to enjoy a glass of wine.

Another one of the sunset.

We then proceeded to eat a tapas plate in another place in the middle of town. 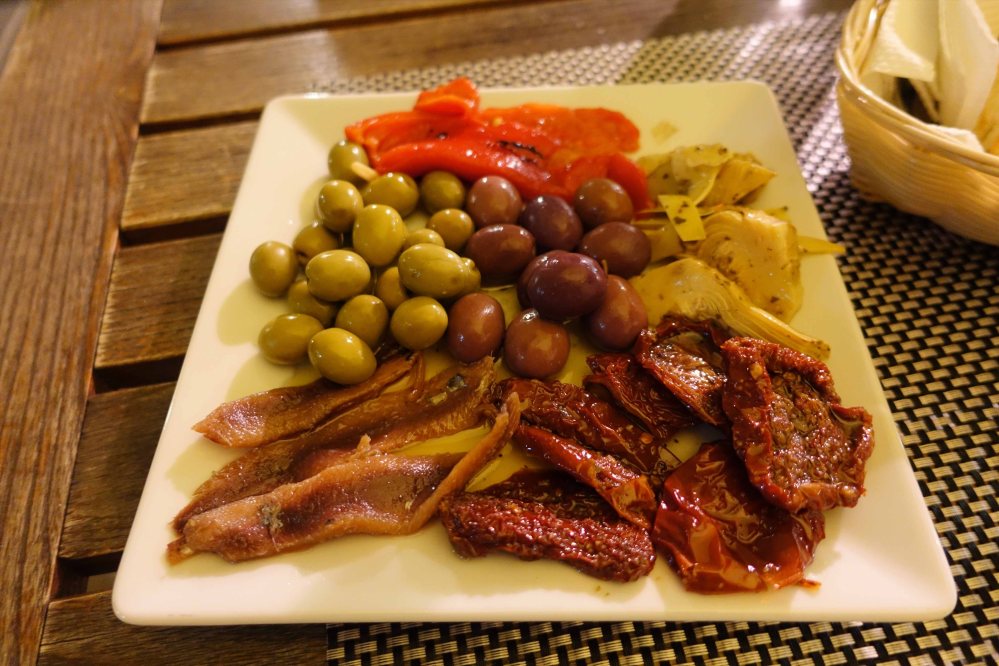 Eitan had a FOMO attack this morning, there was a castle on top of the hill that supposedly had a great city view of all Piran. Sarah didn’t want to wake up early to climb the castle, so Eitan went alone this time. 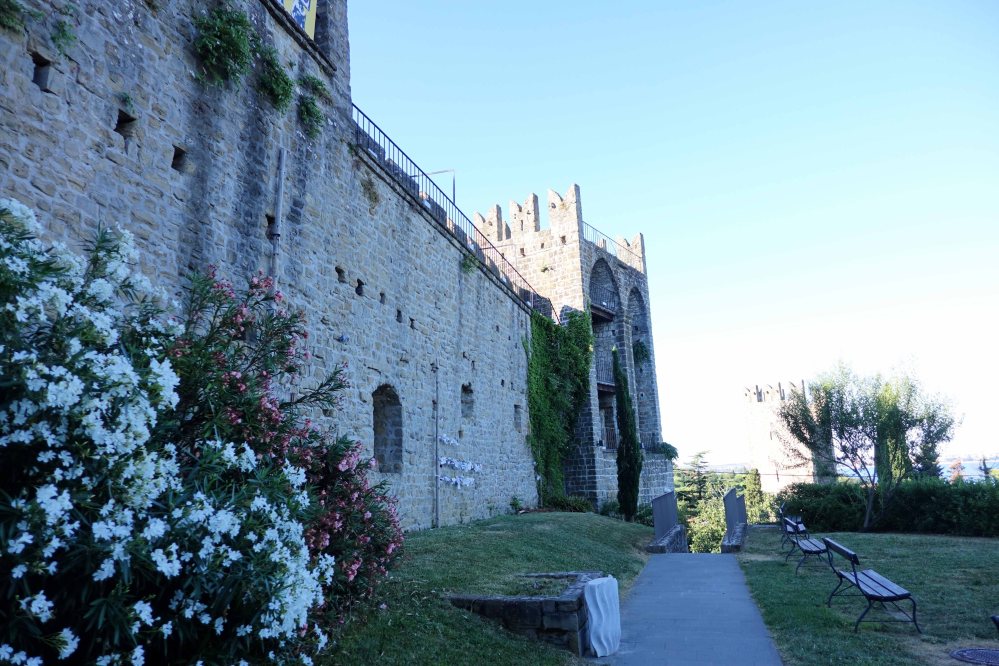 The castle itself does not offer much, the only thing left are the walls.

The view from the top of the walls was really worth it. Really easy to see the peninsula from here.

Here is an aerial photo grabbed from google to show you the beauty of this town: 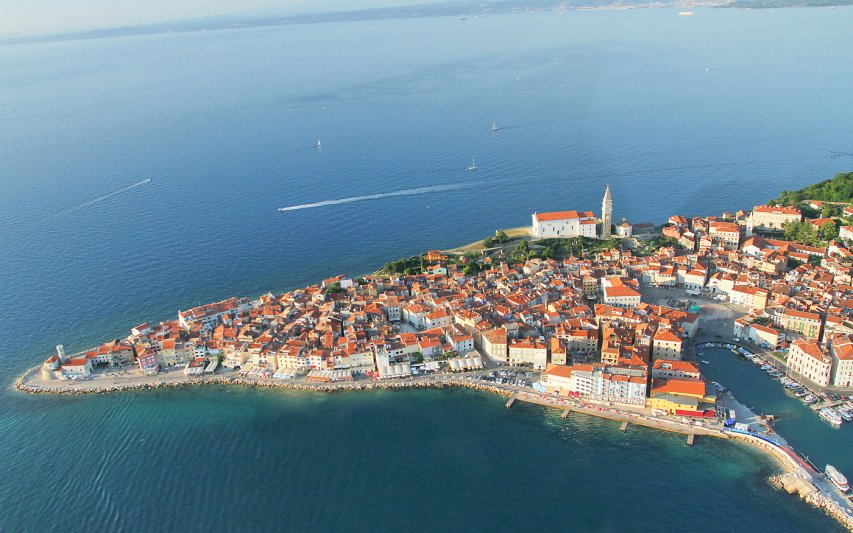 And after all that, we say bye to Slovenia! This country has been an amazing surprise as we didn’t expect much of it before we arrived. Beautiful nature all around and amazing towns to visit made Slovenia one of our highlights of the trip. Hvala Slovenia (Thank you Slovenia)!!!

Bonus Pic of The Day: One of my favorite parts of traveling is when words in the local language mean something funny in Spanish. This red chili sauce, which by the way is very tasty is called “Droga” which in Spanish literally mean drugs. I guess this sauce must be addicting.