The Predjama Castle is situated in the middle of a towering cliff, a mere 9 km from Postojna Cave. Picturesque, magnificent, defiant, mysterious and impregnable, it has been dominating the surrounding area, perched high up in the 123-metre high cliff, for more than 800 years. It is listed among the Guinness World Records as the largest cave castle in the world. 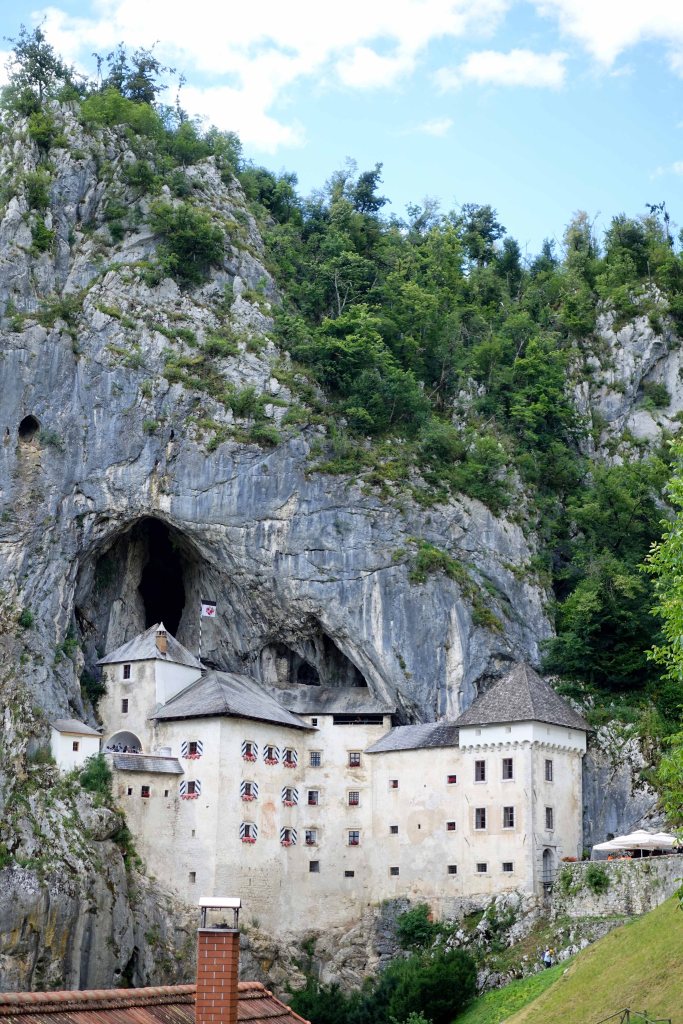 Predjama Castle with its location and mysterious tunnels is truly something special. It impresses visitors with how well the natural cave and the man-made castle walls are interwoven. 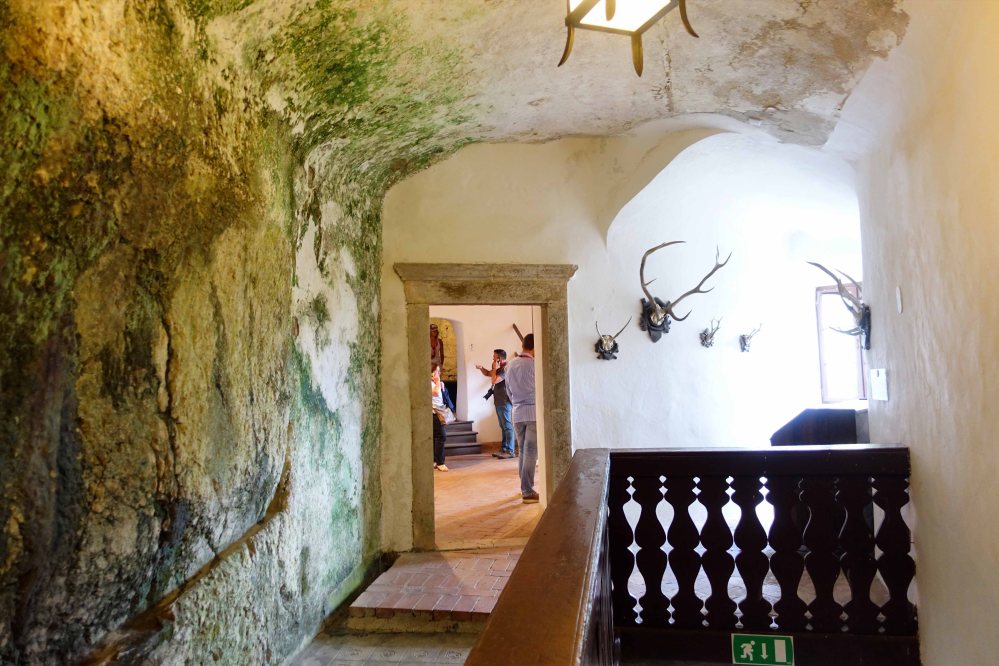 In the past, the castle provided the venue for the filming of several science documentaries and feature films. In 1986, Predjama Castle was one of the filming locations of the film Armour of God with Jackie Chan in the starring role. 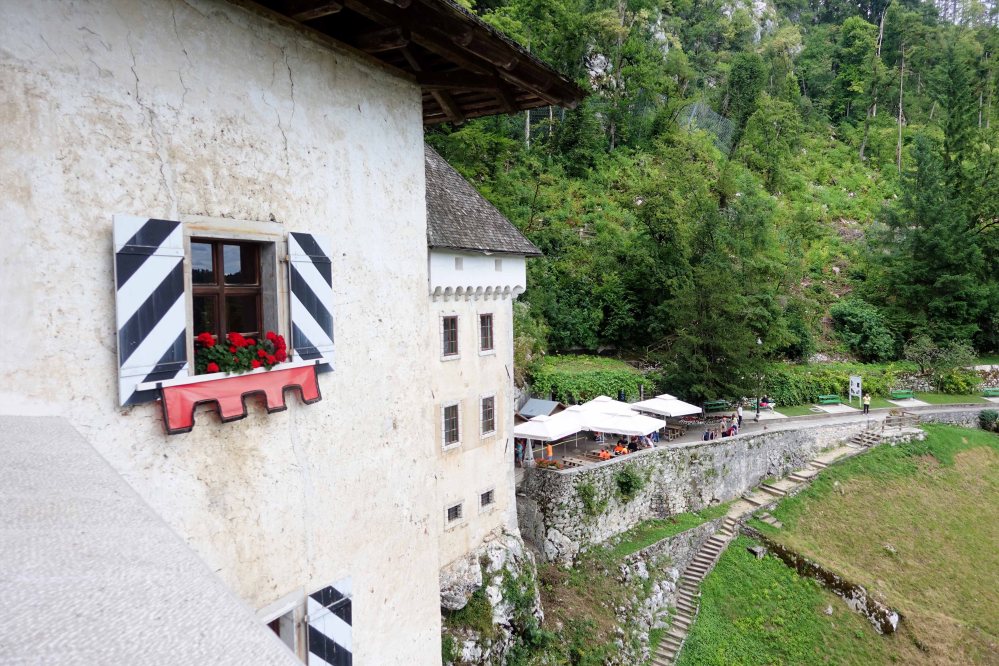 The castle offers a unique insight into the construction techniques and ingenuity of medieval people who came here searching for a safe haven right at the entrance to the cave. 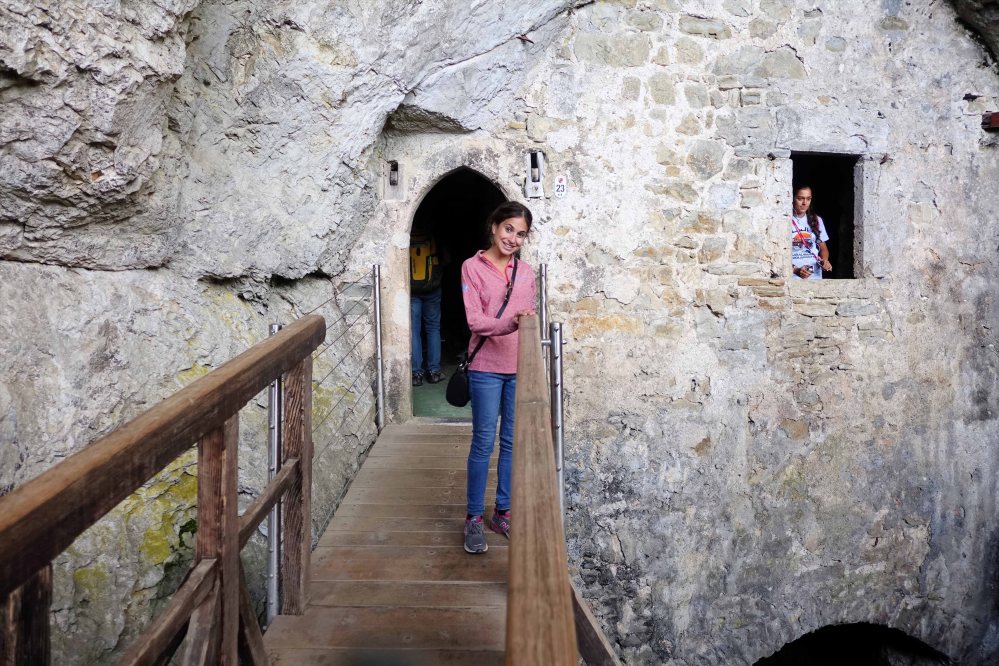 According to legend, Erazem Lueger and his family had taken over the Gothic Predjama castle in the late 14th century. Acquiring land and power, Erazem had become a well-known robber baron in the region. However, he quickly grew too big for his britches, murdering the kinsman of Frederick III, the Holy Roman Emperor. With the strength of all of his forces, Frederick came after Lueger, and forced him into hiding in his castle. 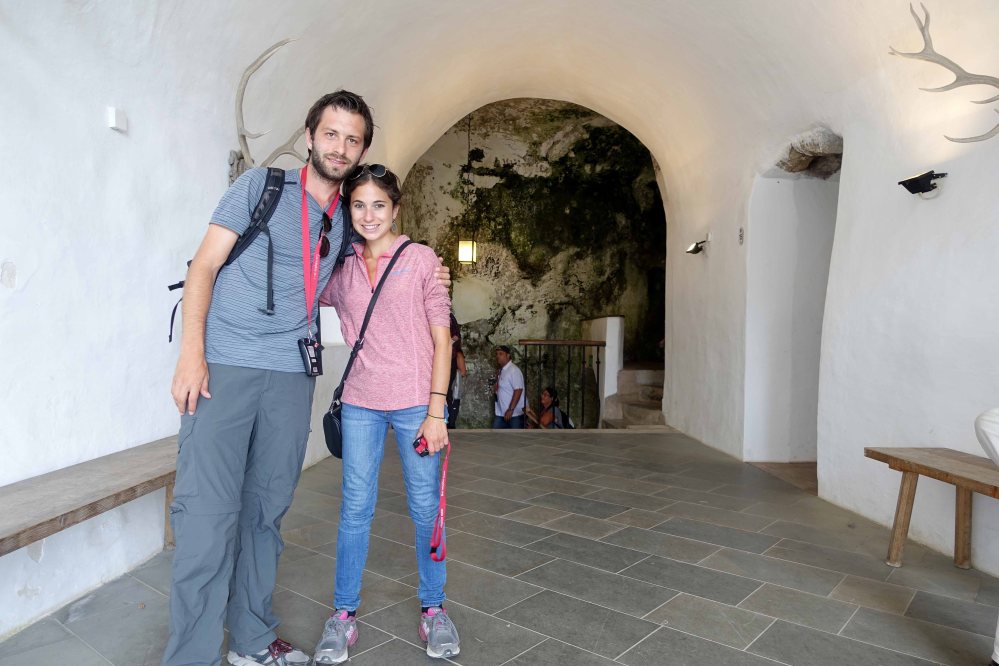 Despite the Emperor’s superior forces, the rebellious Lueger had both brains, and a secret tunnel between the castle and the nearby Postojna Cave. For an entire year and one day, Lueger snuck out of the castle and replenished food and drink through the tunnel from a nearby town. Finally, after surviving for so many days, one of his servants sold him out.

Waiting for Lueger to use the outhouse on a high floor of the outside face of the castle, the servant raised a flag and one single shot from a cannon blasted the baron off the toilet. 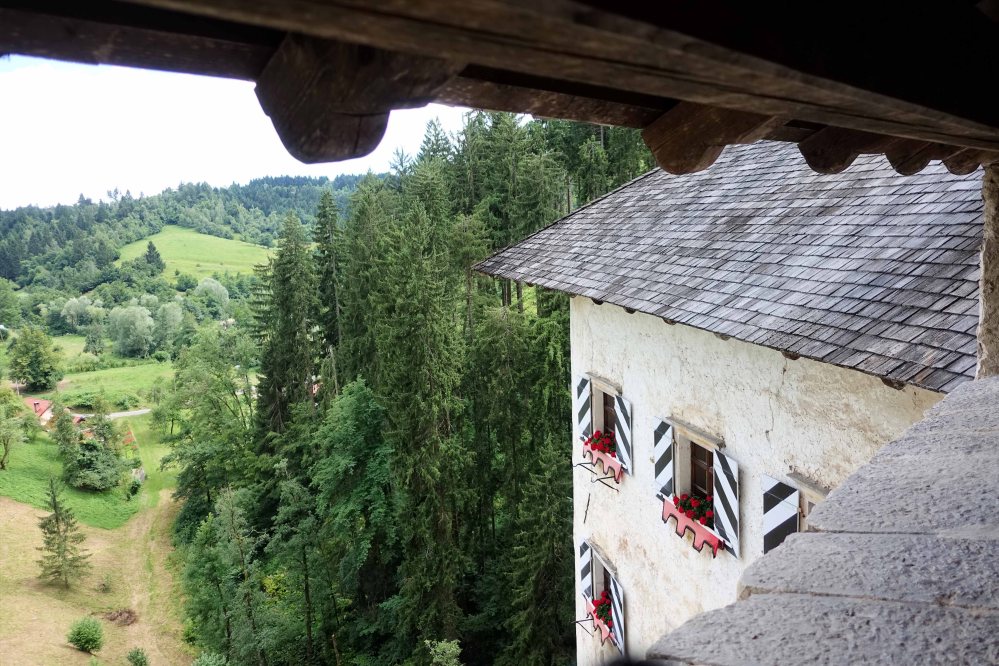 They kept these rocks to drop at the enemies in case of an attack. 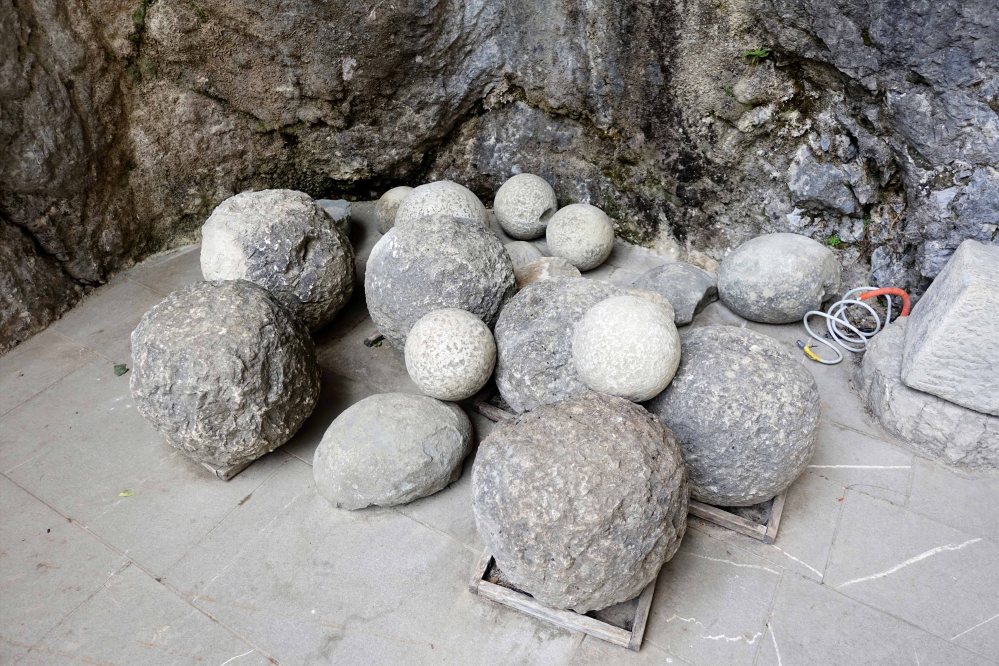 The karstic terrain beneath the castle with its cave system was an excellent choice. It provided Erazem and his people with a secret passage that lead to freedom, a source of drinking water, a further place for hiding and storage of food – everything that turned out to be indispensable, invaluable and essential during the siege. 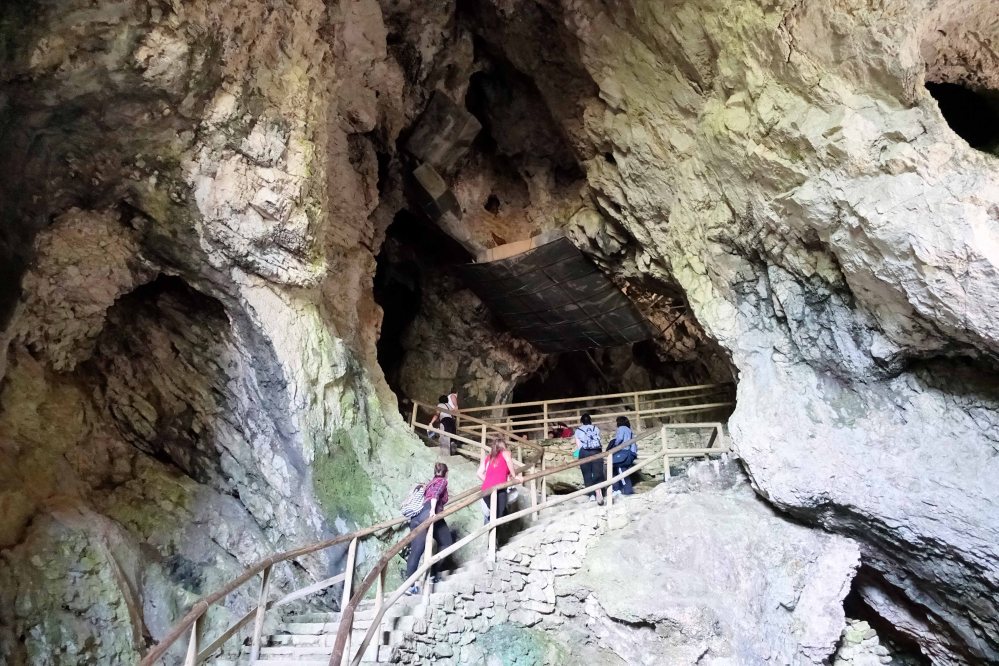 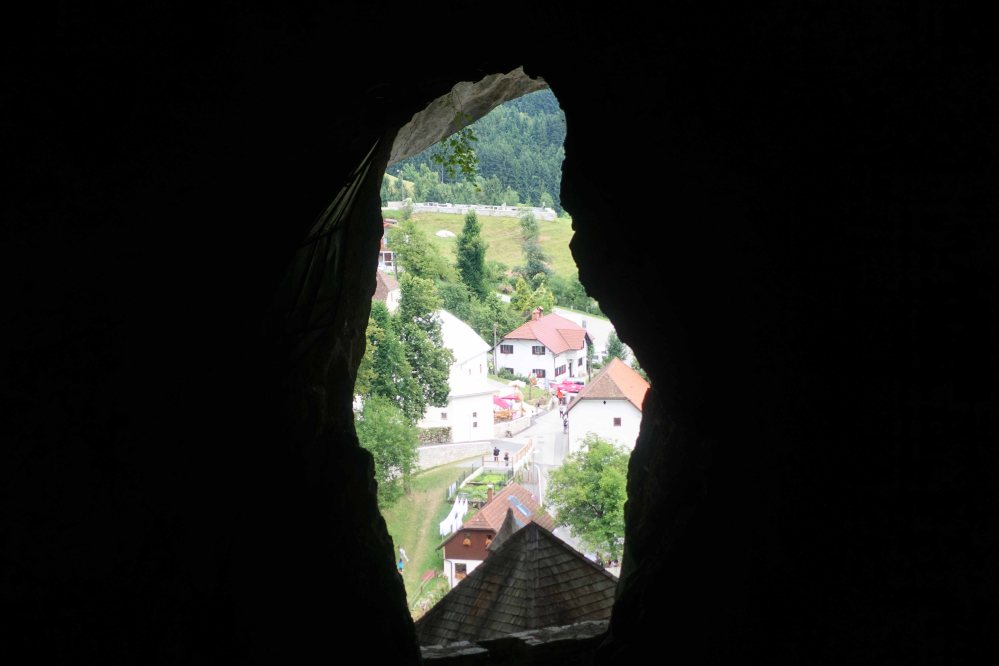 Everything gets very nicely explained in the free audioguides they offer here. It was probably the best audioguide I’ve ever used. Very interestin explanations without all the bullshit. 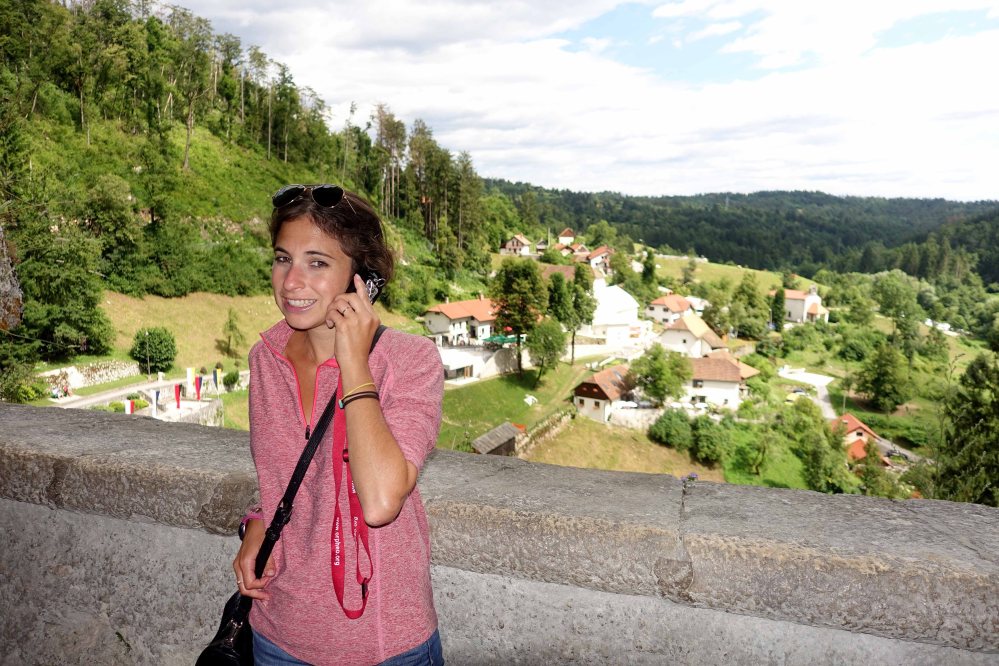 Visitors to Predjama Castle now have the opportunity to see a renovated room inside the main castle attic. Back in the day, the room, which boasts a superb view of the entire valley and the roads leading to the castle, served both as an area from where the castle’s defense crew defended the castle and their dwelling place. Nowadays, the room gives an insight into the castle area once used by the team tasked with the castle’s defense. 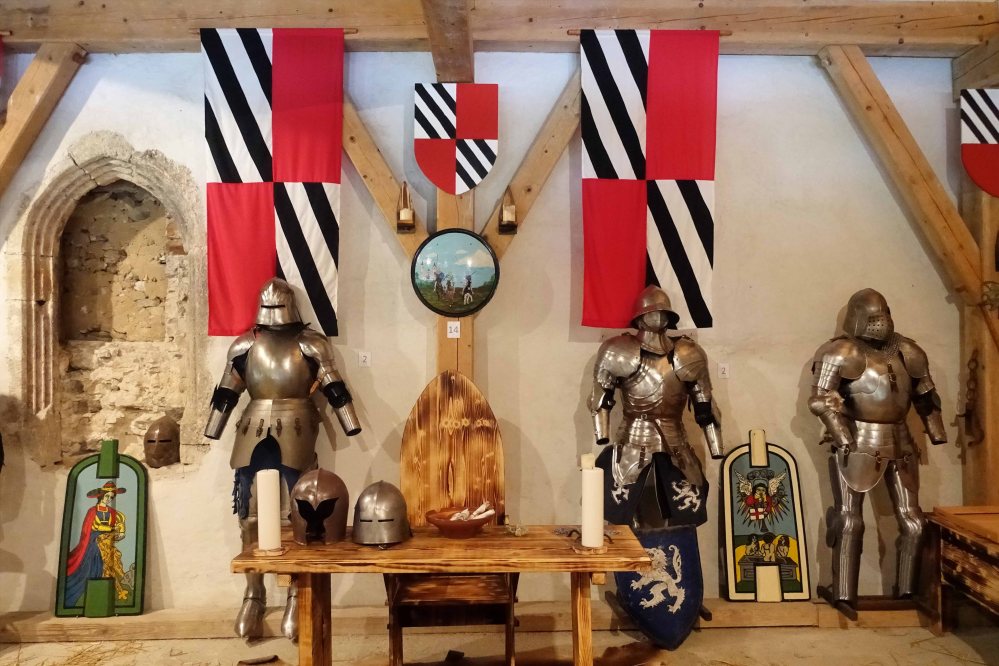 Visitors can have a look at a number of replicas of various weapons, including spears and halberds, swords, war hammers, bows and crossbows, as well as armors. As is the case with everything else, the weapons highlighted a significant difference between the nobility and the peasants. As their acquisition imposed a heavy financial burden, armours and swords were almost always owned and used by the noblemen. The morning star weapon (the one with the chains and metal balls with spikes that resemble a star) get its name because it is the weapon the knights used the next morning to kill all the injured soldiers lying in the battlefield… savage. 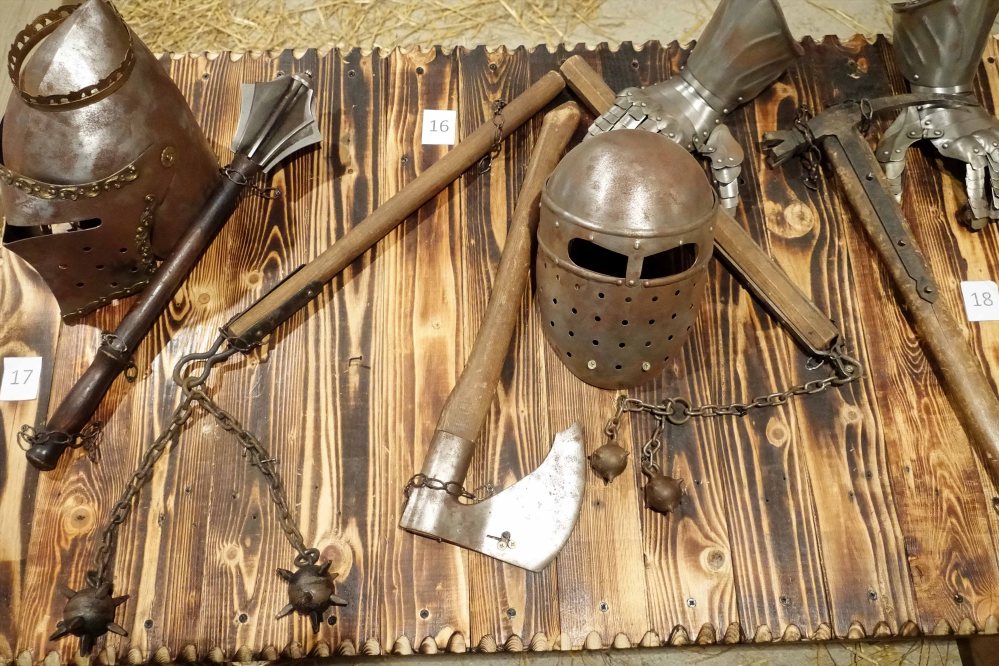 Sir Sarita “Wolf Heart” – Knight of Glendale, modeling the new amazing medieval helmet designed to increase your chances of survival in battle from 4% to 4.6%. I wouldn’t be surprised if hipsters start using them soon on the streets of L.A. 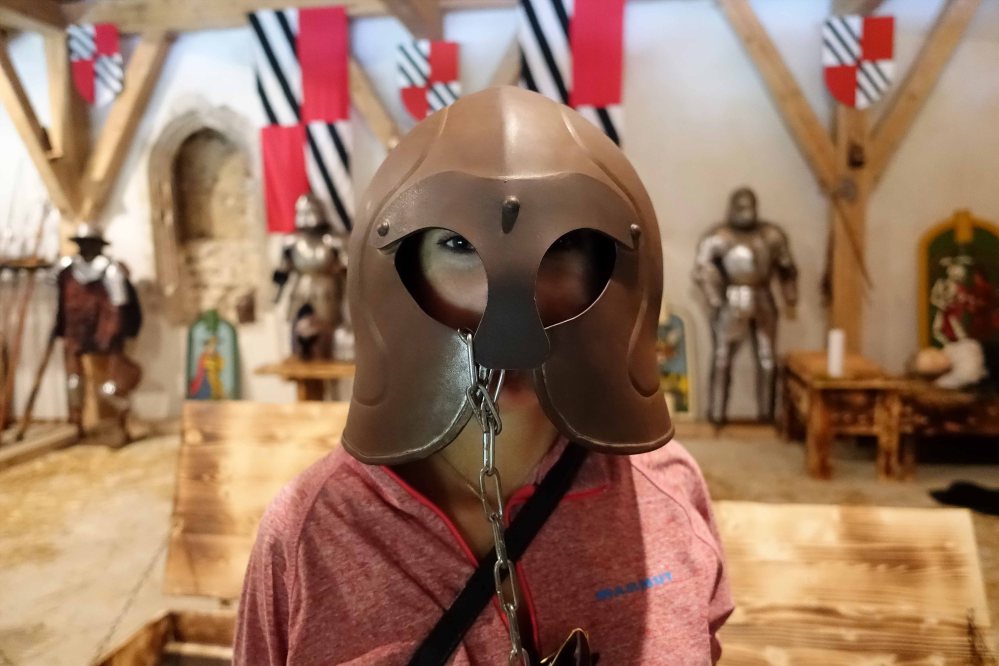 After the amazing visit to the castle, we drove 15 minutes to the amazing Postjona Caves! Slovenia is full of caves, the two most important ones are Postjona and Skocjan. Originally we decided we were only going to visit just Postjona but luckily we decided last minute to visit both (see the next blog post for Skocjan).

The Postjona caves are a little bit more touristy and many people complain that they even have a Disneyland-like train ride that takes you a couple miles into the cave system. They couldnt be more wrong, the train ride takes the experience to the next level… it was amaaaaaaazing! 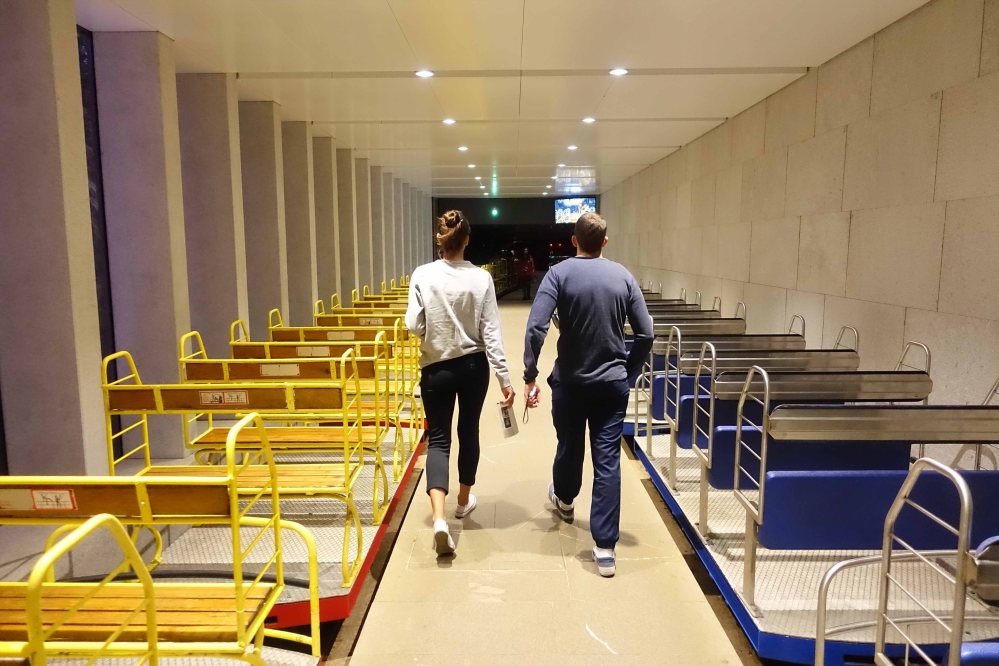 The adventure starts with a ride on an electric train which whisks visitors into the black abyss, with only a few lamps guiding the way. It zips through an expansive, open part of the cave called the Ballroom, which has been outfitted with stunning chandeliers—just incredible! (too fast for photos)

In 1872, cave rails were laid along with first cave train for tourists. At first, these were pushed along by the guides themselves, later at the beginning of the 20th century a gas locomotive was introduced. If you ever wanted a stalactite to break your arm, this is the time to try to touch the ceiling. 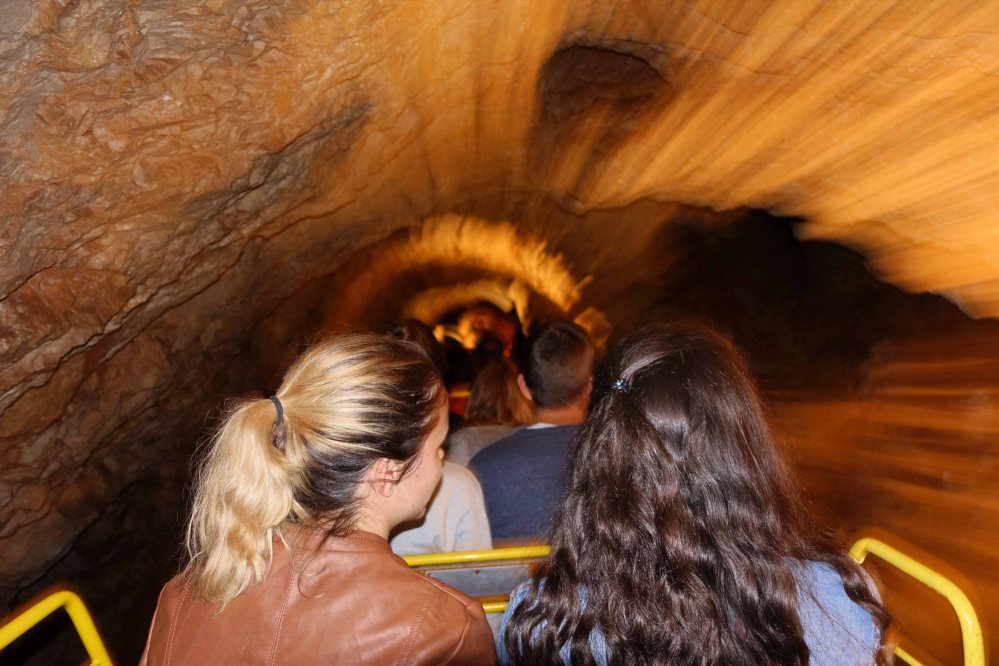 This is a 24,120 m long karst cave system and it is the second-longest cave system in the country (following the Migovec System). The caves were created by the Pivka River over millions of years. 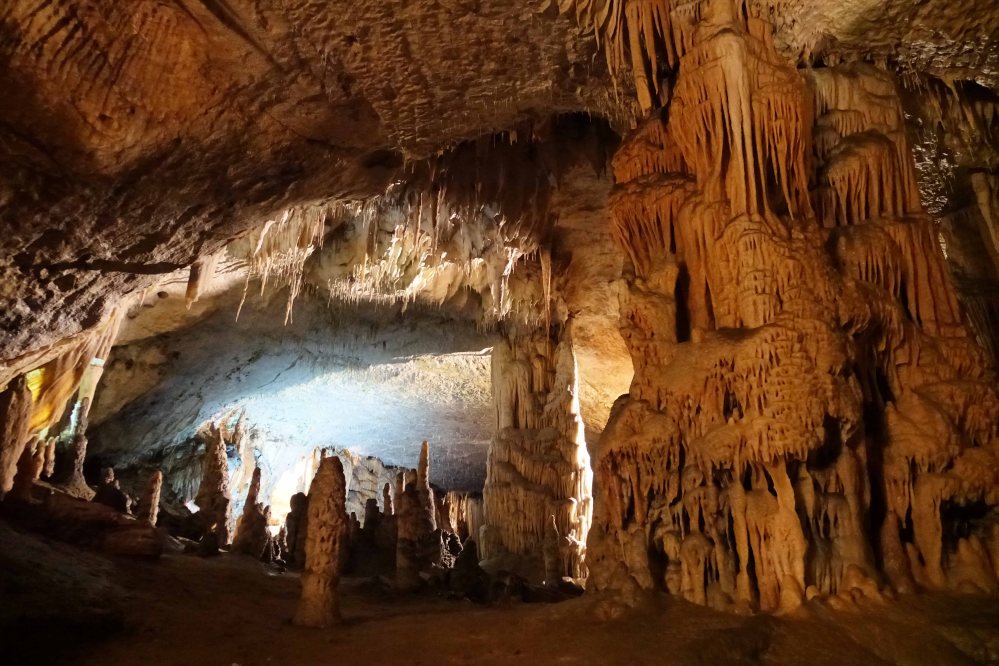 During an hour and a half long guided tour, you learn about all of the most important karst features like the largest, 5-metre-high stalagmite known as Brilliant, 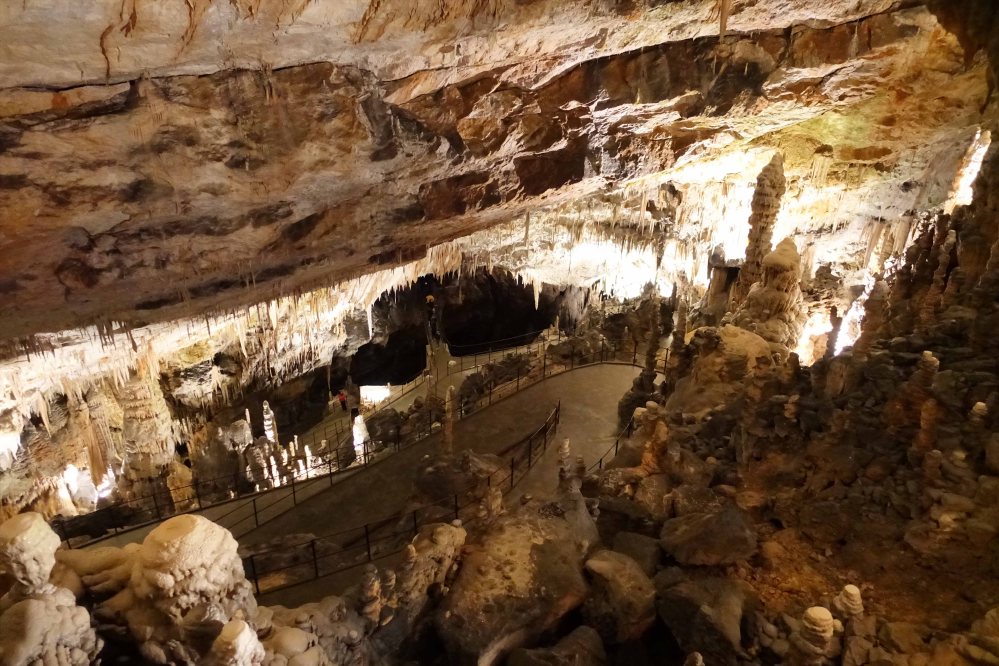 Science lesson YAAAY!!!: A stalactite is an icicle-shaped formation that hangs from the ceiling of a cave, and is produced by precipitation of minerals from water dripping through the cave ceiling. Most stalactites have pointed tips.

A stalagmite is an upward-growing mound of mineral deposits that have precipitated from water dripping onto the floor of a cave. Most stalagmites have rounded or flattened tips. 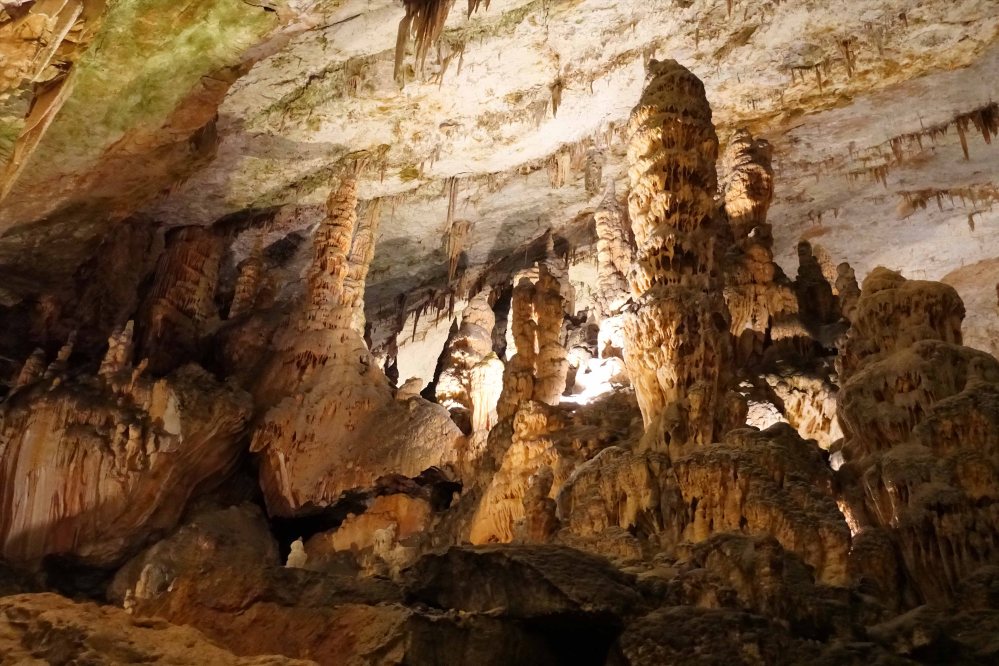 The total length of the cave available for tourist to walk is 5 km. But you have to go on a guided tour, no wandering around allowed. 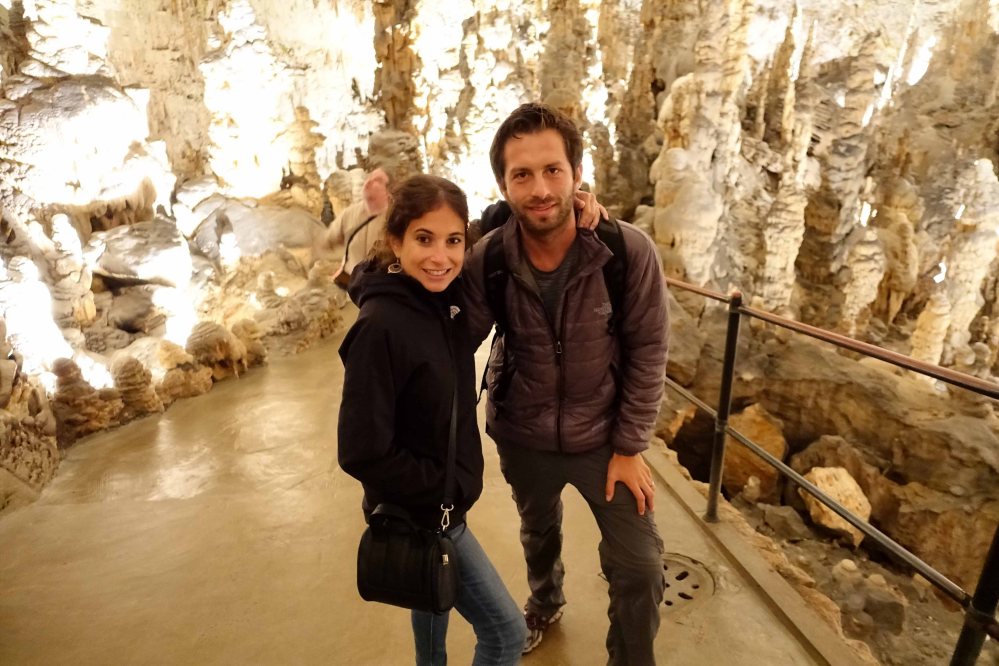 The lights in the cave remain off until a group enters the next section, a whole new world opens in front of you as the cave gets illuminated. 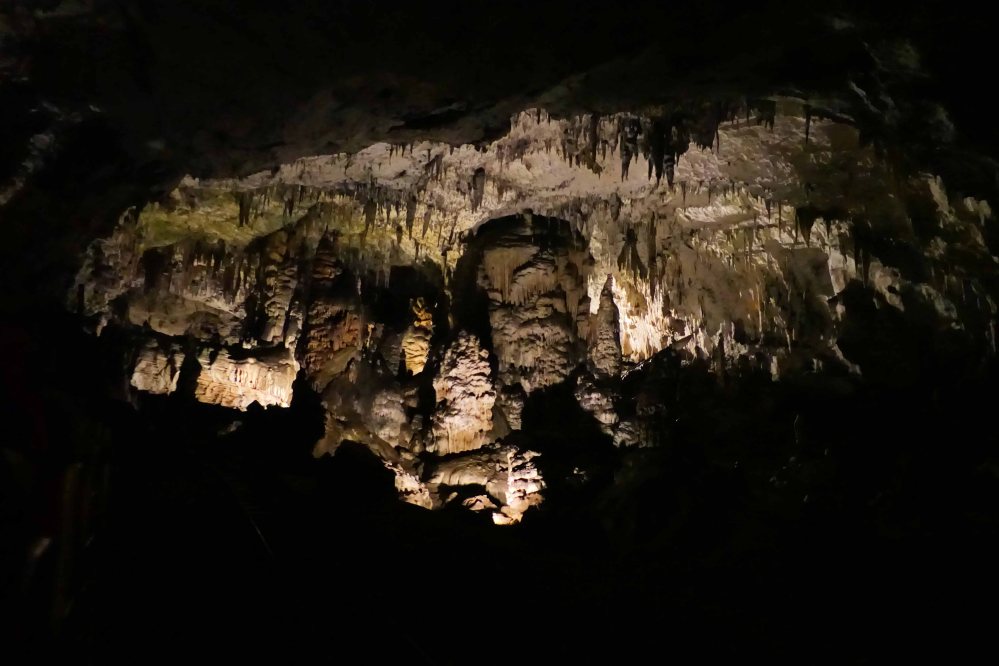 Just as the chill of the cave hits, we arrived at the most famous landmark of Postojna: the Brilliant. The most famous stalagmite of all, Brilliant is a bright-white, five-metre high limestone formation. Protected by a nearby column and framed by a sister fountain called ‘the Organ’, it’s one of the most popular spots in the entire cave park. 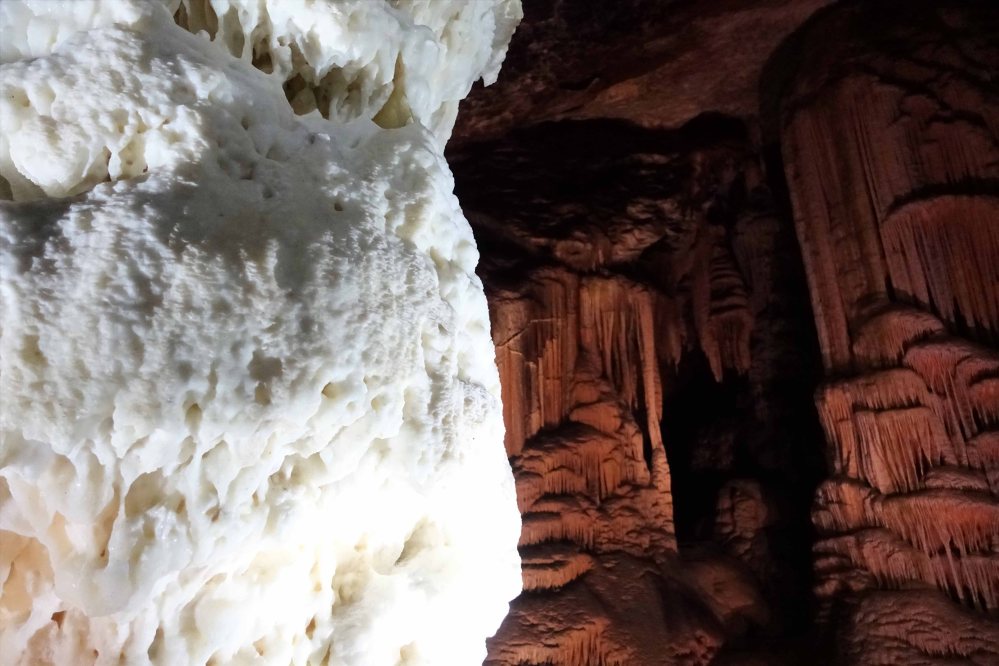 More than 150 animal species live in the karst caves of Slovenia, and the largest among them is the human fish (Proteus anguinus). The only European underground vertebrate can live for up to 100 years and can survive without food for years at a time. At the end of the tour we were able to admire some of these creatures in complete darkness, we were not allowed to take photos as the flash could kill them immediately, so here is one photo taken from the mighty google. 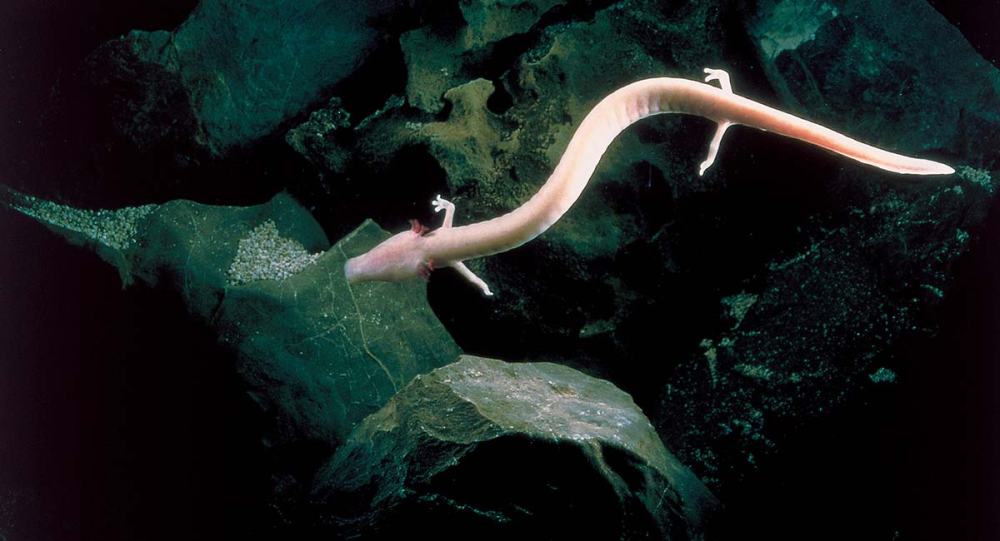 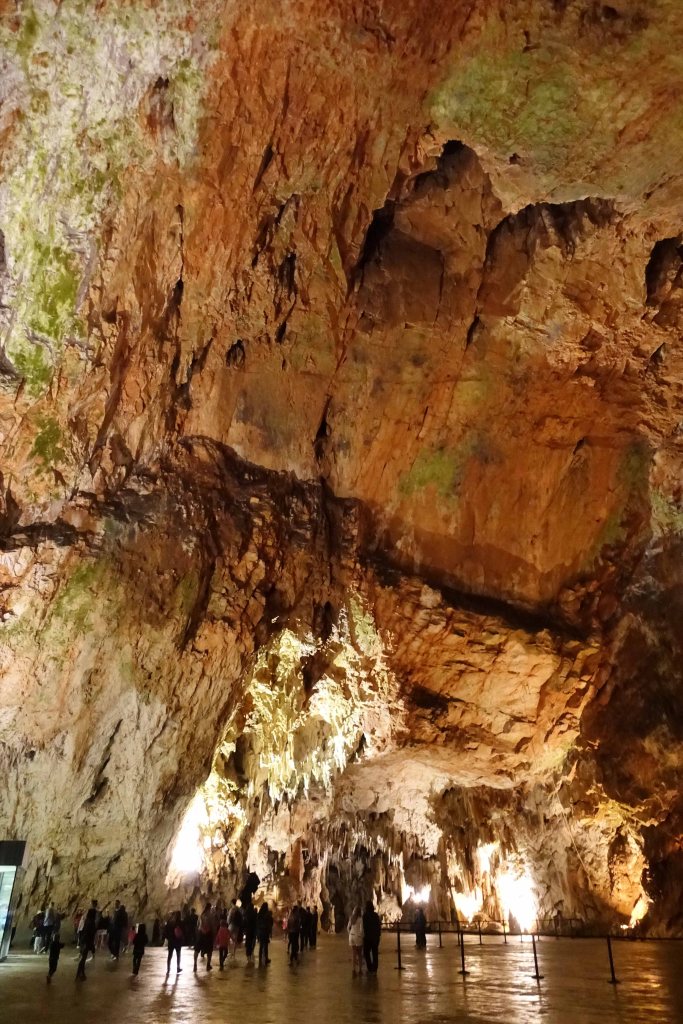 During World War II, German occupying forces used the cave to store nearly 1,000 barrels of aircraft fuel, which were destroyed in April 1944 by Slovene Partisans. The fire burned for seven days, destroying a large section of the cave and blackening the entrance.

After the incredible cave tour, we drove to Piran where we are going to be spending the next couple of days before we go to Italy!

Bonus Pic Of The Day: I know you are already missing the “”Toilets around the world” series, so I think it was time for another entry. Castle toilets are rather basic, but this one had a spectacular cliff view. At least they had the luxurious wooden seat and a cover for the smell. 15th-century toilets > Indian toilets. 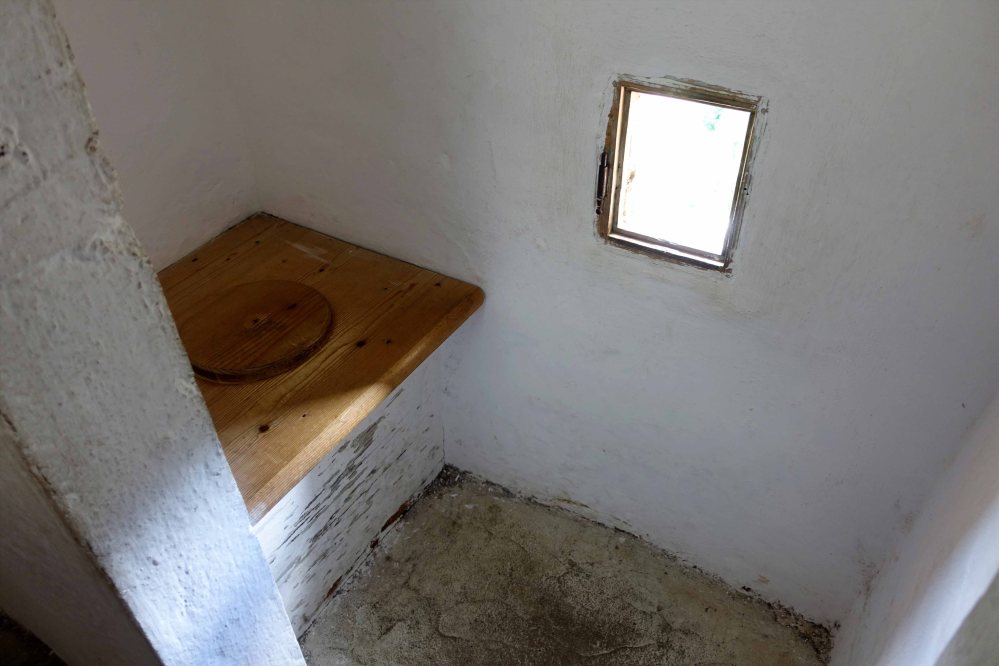