Sightseeing day in Paros! We started the day as usual by renting another ATV quad-bike to be able to visit all the island. We have noticed that locals here are less friendly than in Santorini.

The first stop was the town of Lafkes, the first capital of Paros. The village is located under a pinewood on the hill. A walk around its beautiful narrow streets with the white buildings will impress anyone. 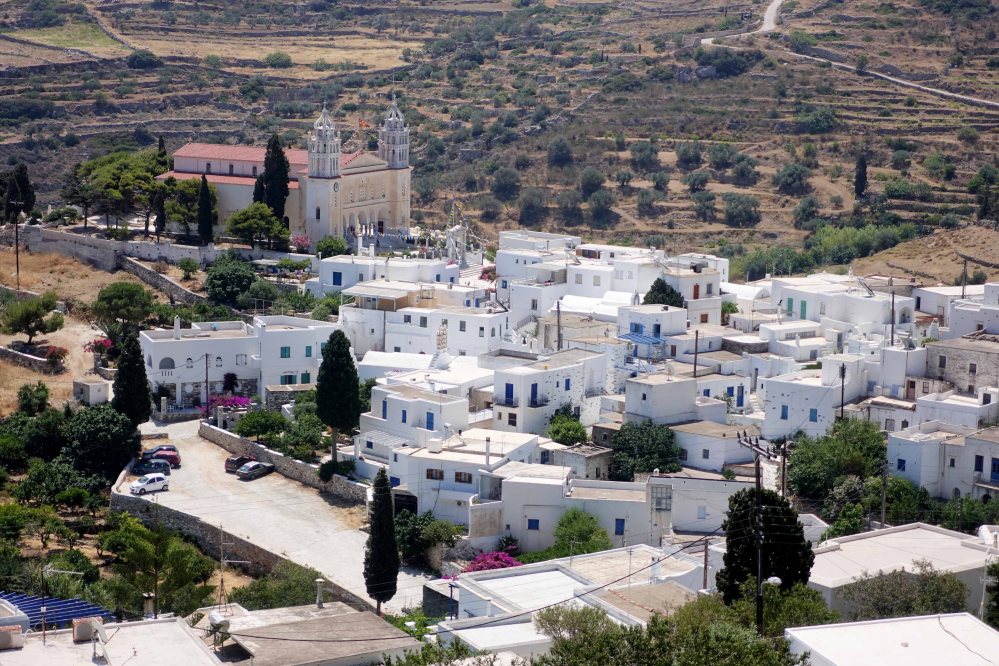 The houses are built amphitheatrically. The first residents were immigrants that came from Crete and Naoussa and locals who chose to built their village on the mountain, in order to be protected from the pirates. 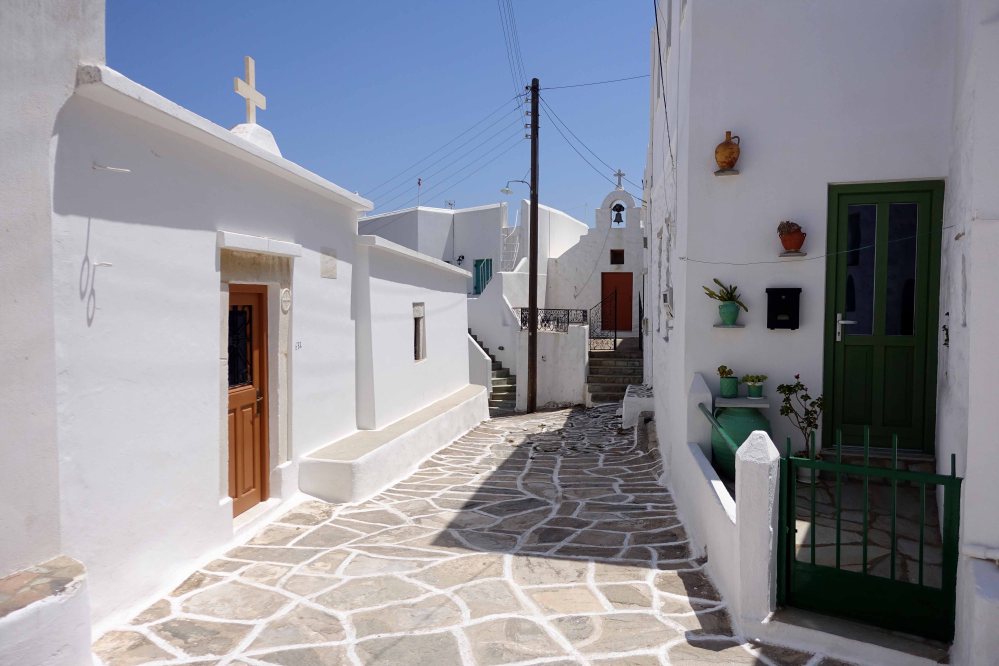 Finding a restaurant to eat was a hard challenge, most restaurants and shops do not open until 7 or 8 pm, add the extreme heat to this and you will be visiting complete ghost towns if you decide to go sight-see during the day. We finally found this local cafe where we tried the Tomatokeftedes (tomato fried balls). They were not really good! 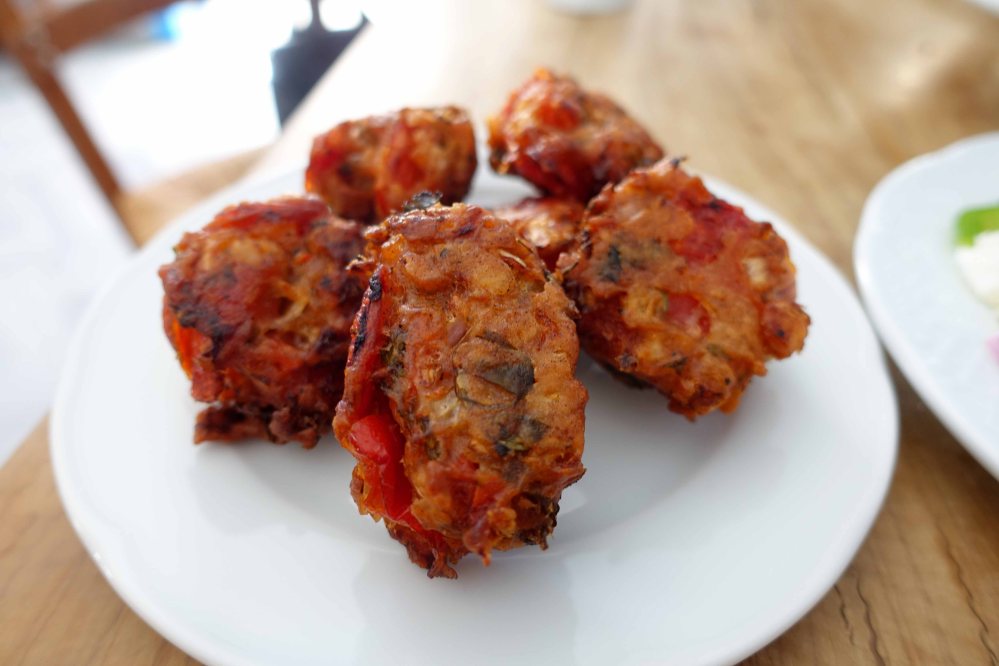 Historically, Paros was known for its fine white marble, which gave rise to the term “Parian” to describe marble or china of similar qualities. Today, abandoned marble quarries and mines can be found on the island, but Paros is primarily known as a popular tourist spot. 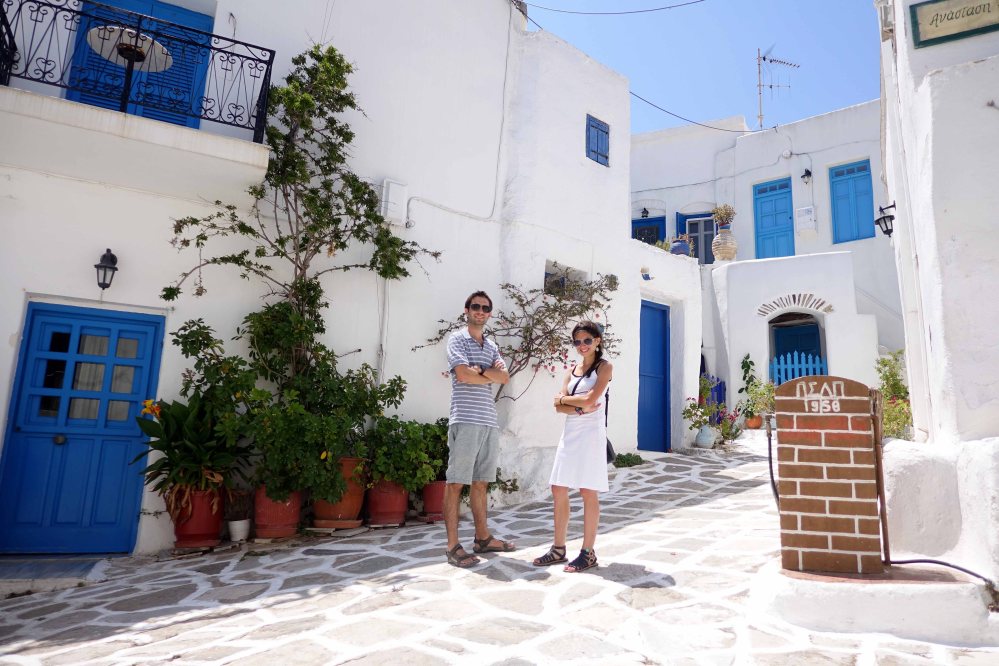 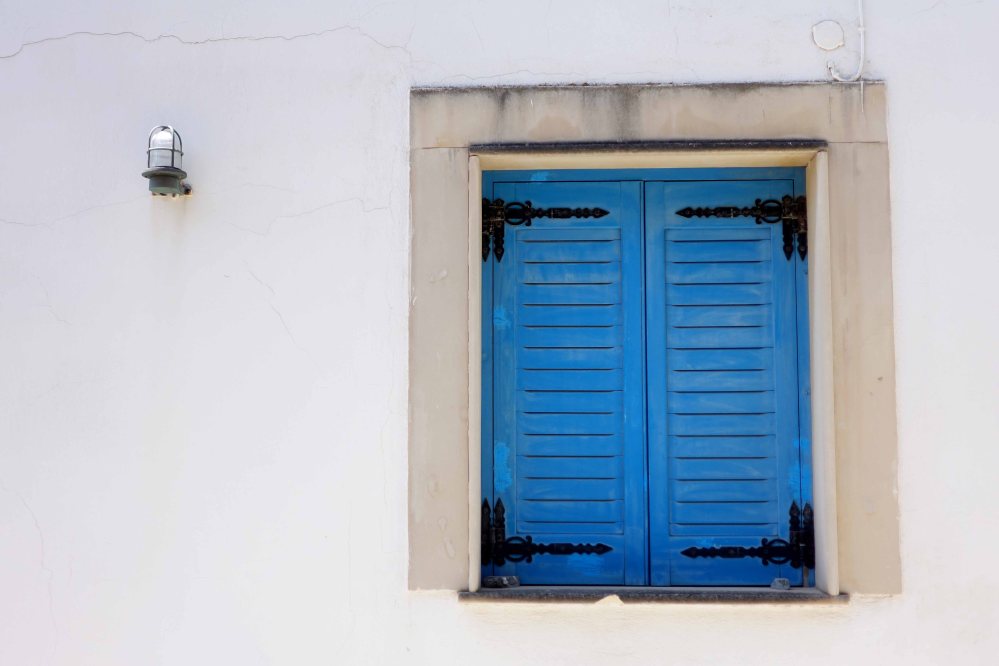 At the top of the town there is a pretty church that was closed when we got there. 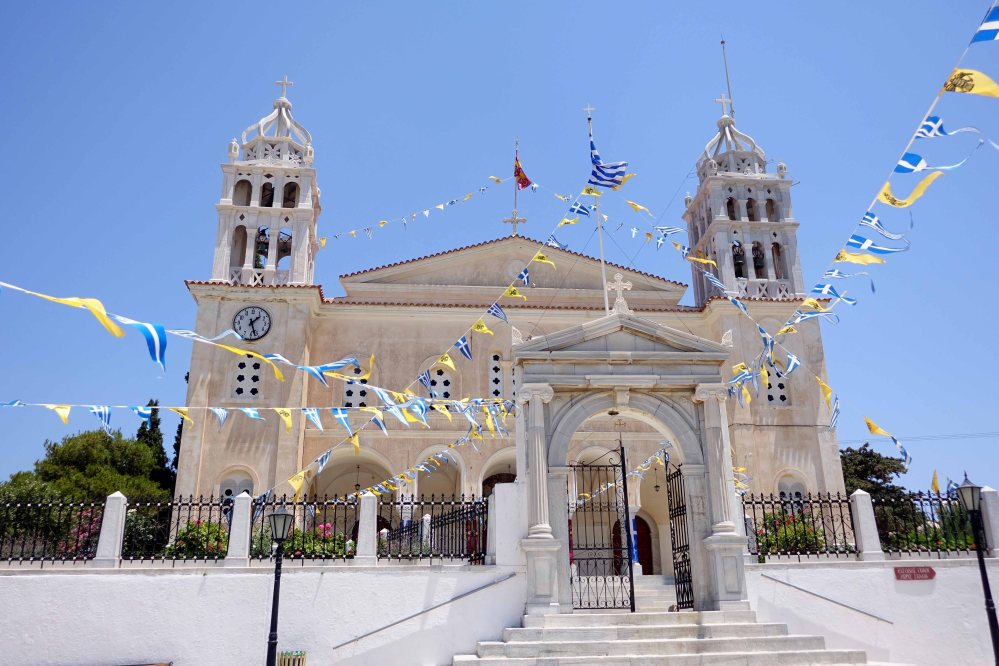 After a quick visit around this beautiful town we drove to the most breathtaking beach on the island; Santa Maria beach is a gem on the North East coast where only a couple restaurants are serving cheap food and drinks but no resorts or big hotels are here. The water color is turquoise which you don’t really see that often around here. 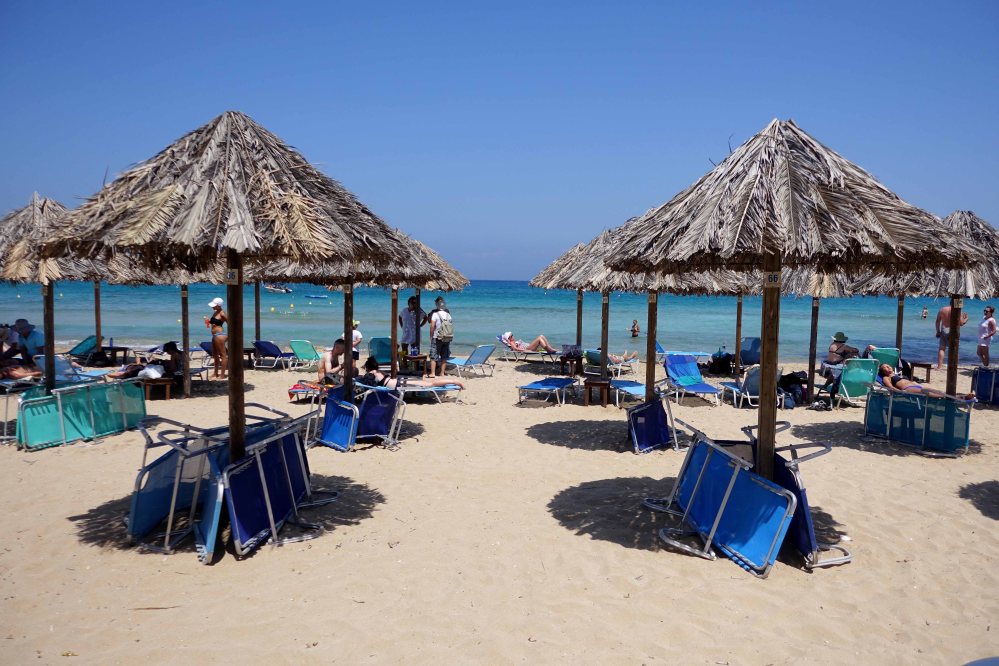 We just got some chicken Souvlaki to enjoy the view for an hour. We are very happy because eating and drinking in these beach restaurants is extremely affordable, even as a backpacker.  We weren’t even hungry but the concept of an affordable beach front restaurant made us feel we had no other option but to grab a bite! 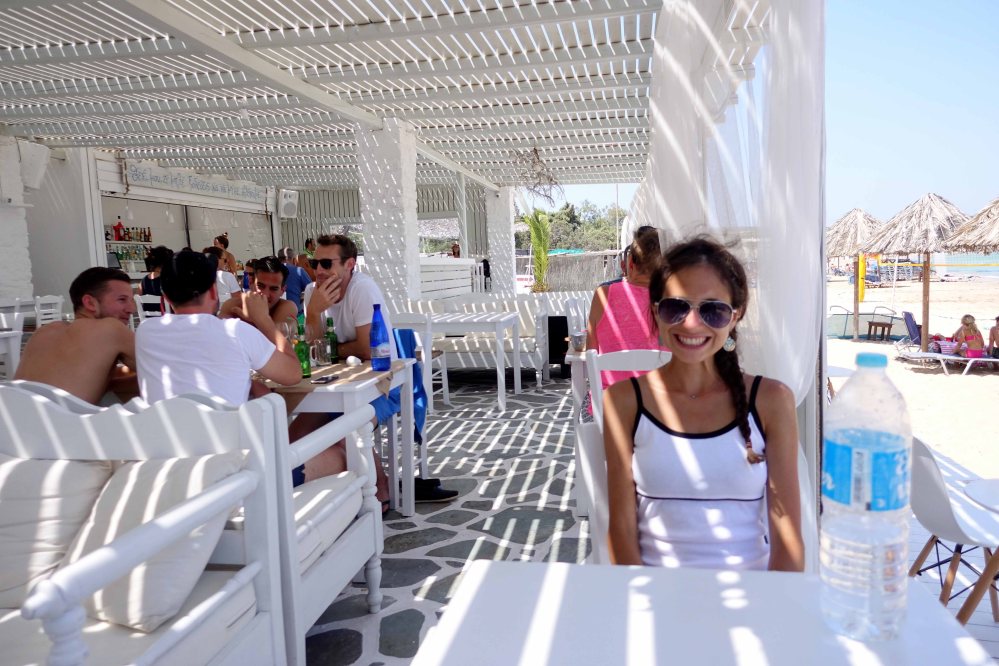 We drove a couple miles north and found another small private beach. We didn’t stay here as we needed to get to the main city in Paros. 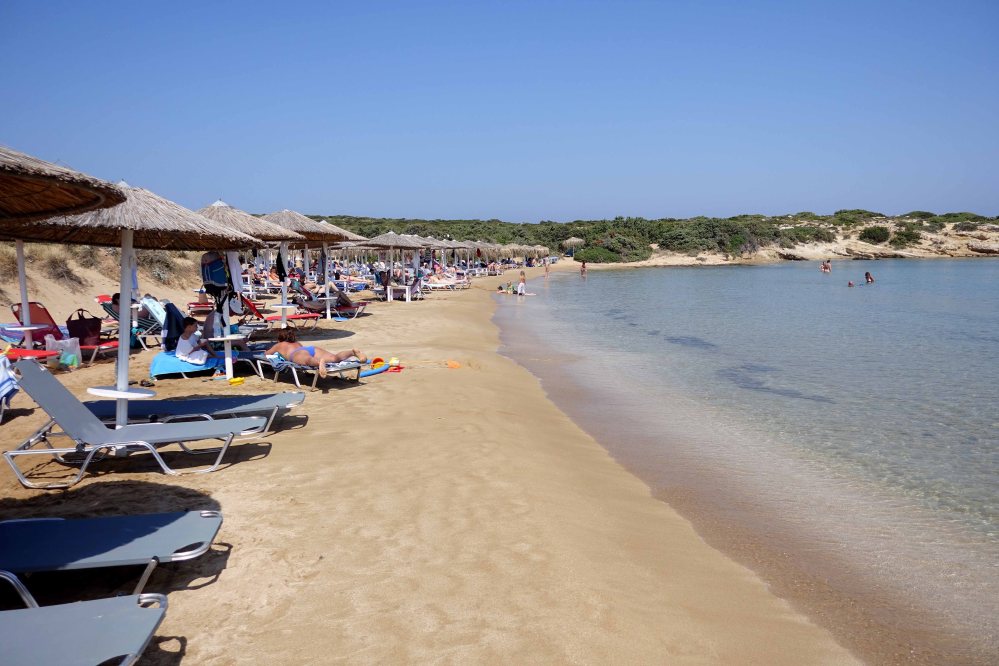 Sarah was eager to test her driving skills, so she took the wheel for half the way. It was a scary experience for Eitan!! 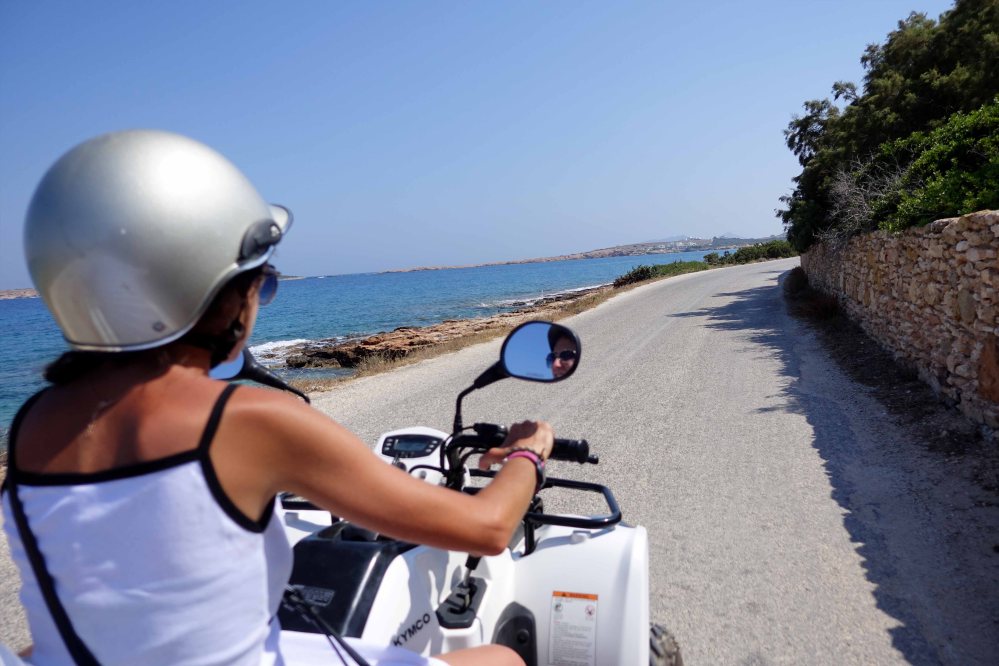 We survived!! We arrived in Naoussa, the postcard-perfect town. Naoussa is the typical Greek fishing town that you imagine. The spiritual center of Naousa is the tiny fishing harbor, packed tightly with traditional fishing boats and surrounded by restaurants and cafes; again nothing opened until night time, which is why it looked empty. 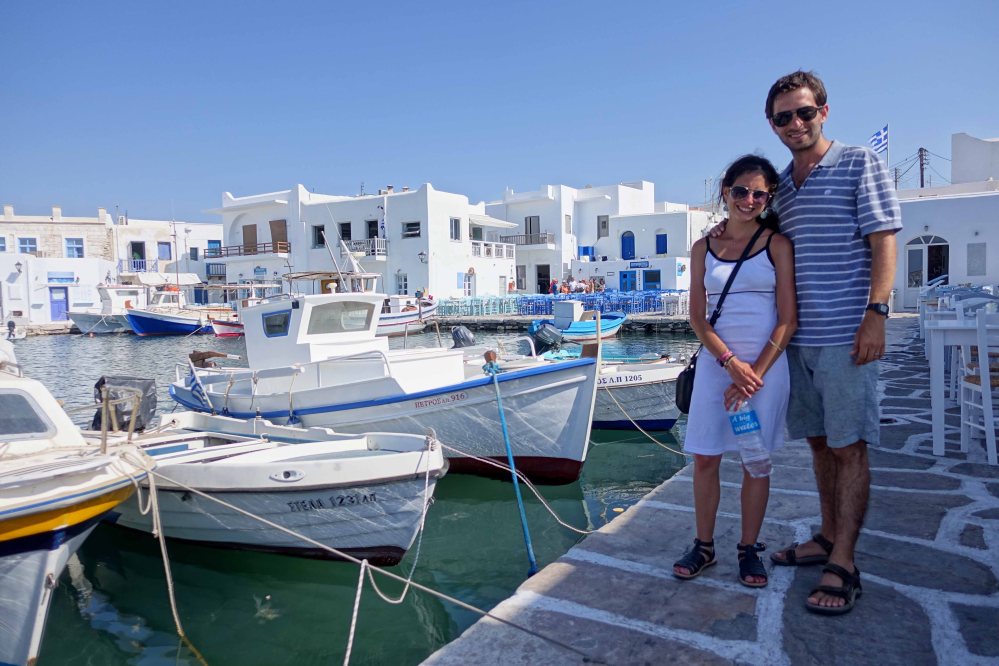 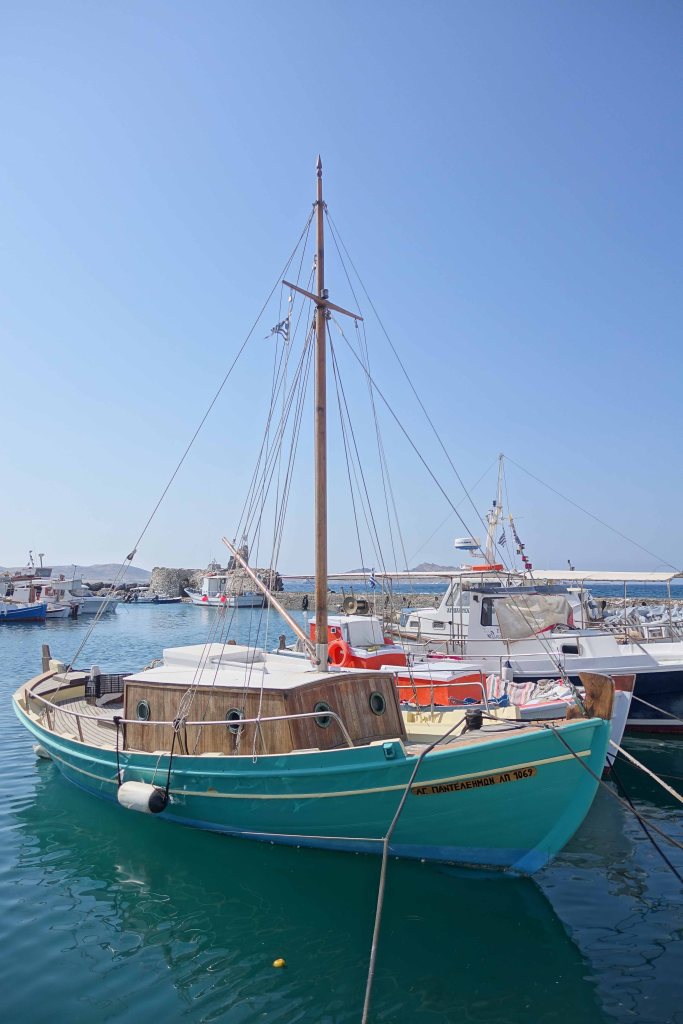 The story is that during the summer the restaurants in Naousa sell so much octopus that they have to import them from China. There are not enough octopus left in the Aegean sea to supply the island. Very sad! 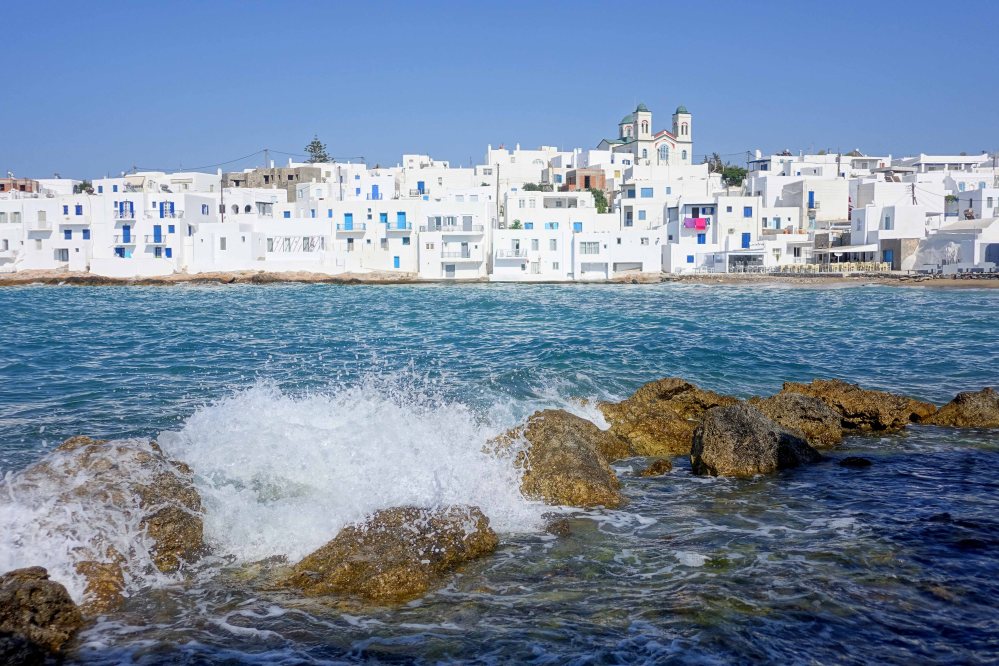 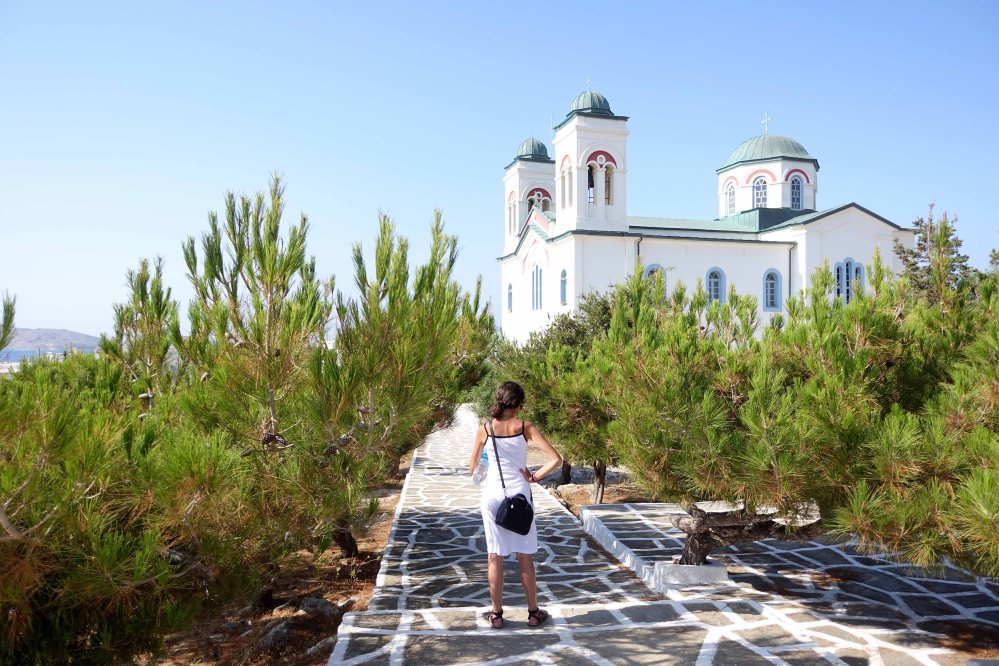 We walked around for a couple of hours and sat down at the apparently #1 restaurant here which was very reasonably priced. The service was horrible and we felt we were not welcomed there for a reason. It might be that we had the backpacker look instead of the luxurious-yacht-owner look that most tourists here have and we were eating well before the trendy hour of 10pm. 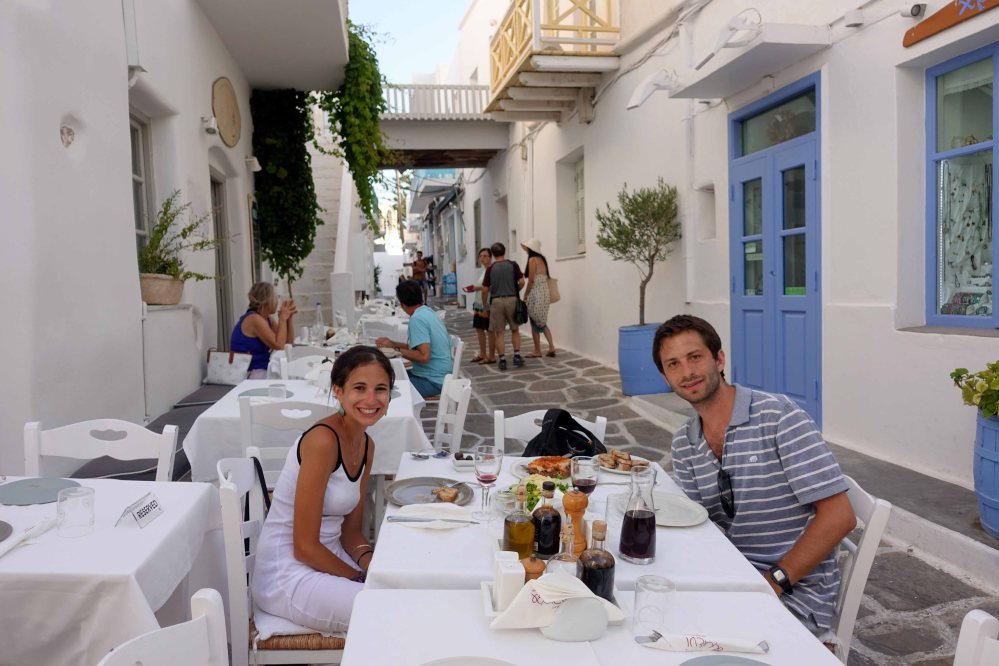 We ordered a traditional dish called Moussaka, an eggplant based dish, often including ground meat and cheese. It was really delicious. 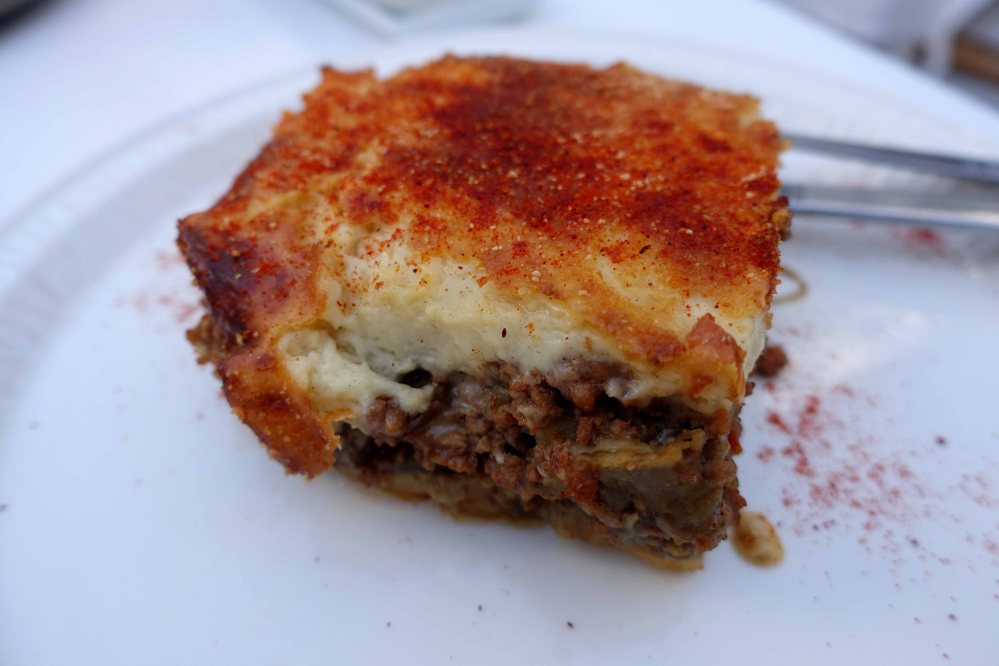 What keeps Naoussa and these seaside restaurants and ouzeries authentic is that the village is a popular destination of Athenians. Because the Greeks come to Naousa these restaurants serve high quality food at reasonable prices. 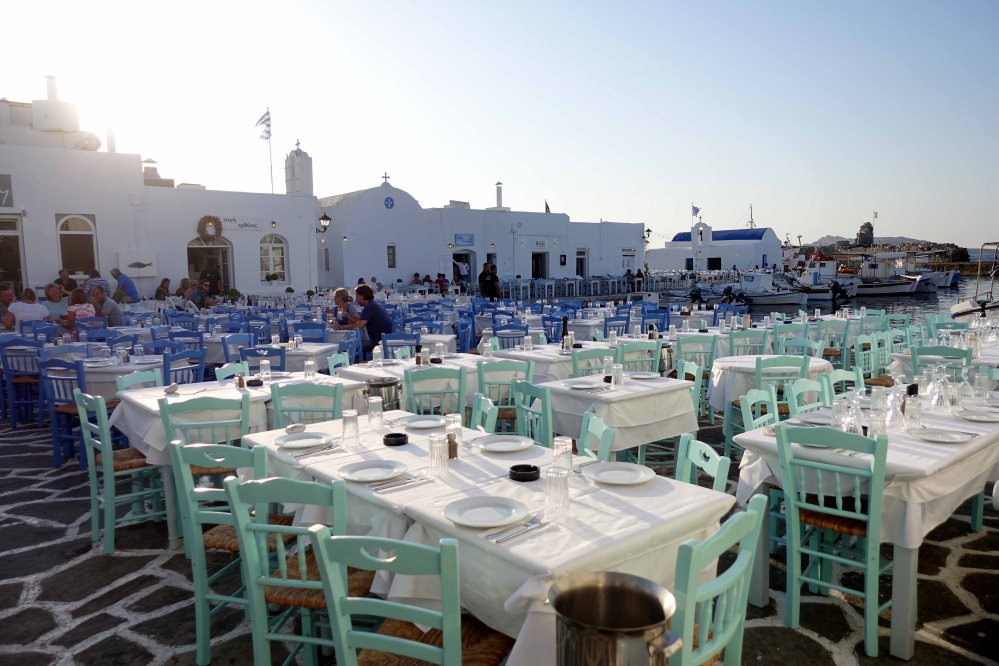 After dinner and enjoying the sunset we drove back to our hotel which was around 30 min away. The drive was stunning as the sky turned red. When we came back we had some extra gas to burn so we drove without direction and we found a perfect view of the town of Parakia from the top of a hill. 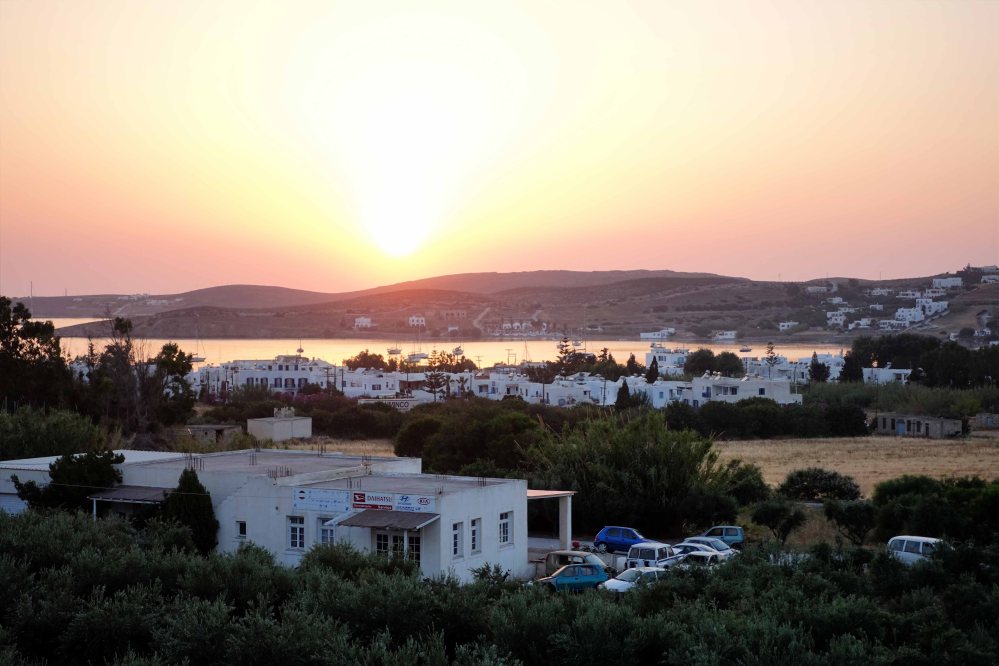 Bonus Pic Of The Day: The Greek alphabet, widely used by american fraternities and sororities, even though most fraternity bro’s couldn’t even point out Greece on a map, has a lot of history behind. It was originally written with only capital letters and it was cut down from thousands of characters to only about twenty-four. This made it much easier to learn. And because Greeks made it easier to learn to read and write, Greeks were much more educated than other ancient people. 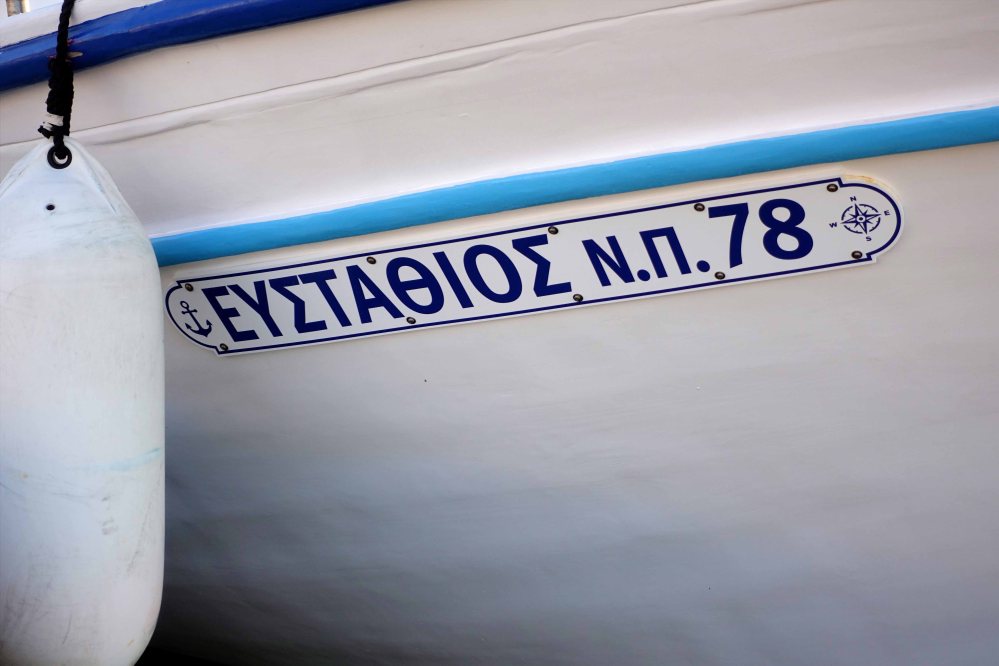