After realizing we have seen everything in Paros, we explored the possibility to visit other islands for the day. Our first option was to go to Mykonos, but unfortunately, today was the only day of the week with no day tours there. Instead, we decided to go to Naxos, which is the other big island next to Paros, it is known for their fertile agricultural land that still is in use, unlike Paros, that converted the island into a tourist paradise.

We took a Blue Star Ferry for about one hour ride until we reached the port of Naxos. The first thing you see when arriving by ship is the beautiful (what is left of) the Apollo temple.

We walked to the Apollo Temple or the Portara. The Portara stands on Palatia, which was once a hill but is now a separate little island connected to Naxos by a causeway. (The Mediterranean has risen significantly since ancient times.)

The Portara is the entrance to an unfinished temple that faces directly toward Delos, Apollo’s birthplace. For this reason, most scholars believe it was dedicated to Apollo, but some think it was built in honor of Dionysus, who was worshiped on Naxos Island.

Whichever god it was dedicated to, the temple was begun about 530 BC by the tyrant Lygdamis, who said he would make Naxos’s buildings the highest and most glorious in Greece. Only the walls were mostly completed when he was overthrown in 506 BC; the temple was never finished. Evidence from pottery indicates the temple’s cult was abandoned by the 5th century BC. 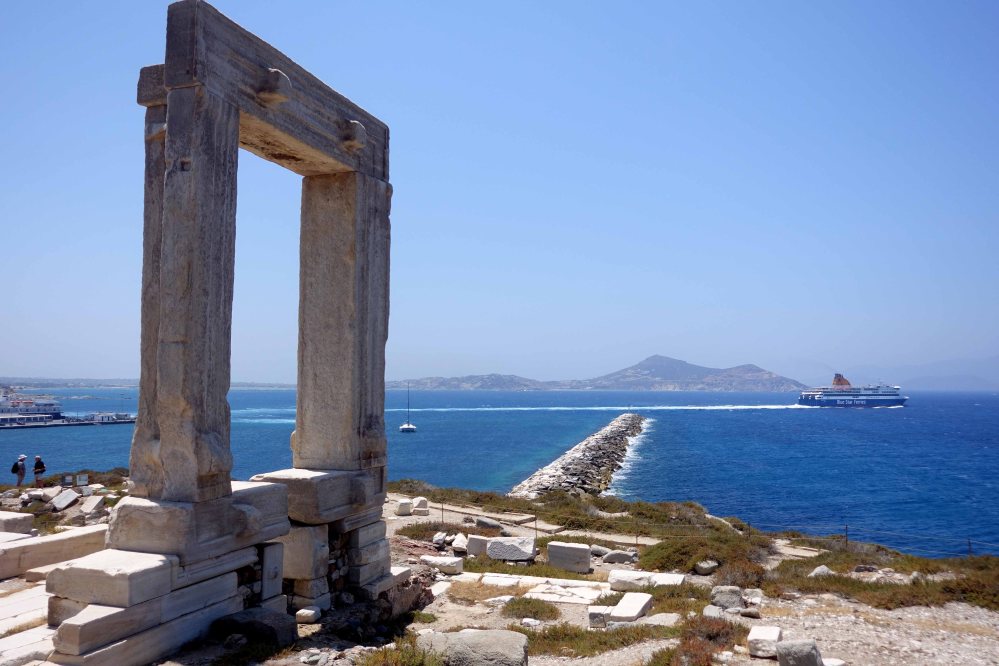 By the 5th and 6th centuries AD, the temple had been converted into a church. Under Venetian and Turkish rule the temple was dismantled so its marble could be used to build a castle. The doorway, however, was so large and heavy it could not be used, so it remains standing alone among the ruins.

One legend has it that in the Heroic Age before the Trojan War, Theseus abandoned the princess Ariadne of Crete on this island after she helped him kill the Minotaur and escape from the Labyrinth. Dionysus (god of wine, festivities, and the primal energy of life) who was the protector of the island, met Ariadne and fell in love with her. But eventually Ariadne, unable to bear her separation from Theseus, either killed herself (according to the Athenians), or ascended to heaven (as the older versions had it). The Naxos portion of the Ariadne myth is also told in the Richard Strauss opera Ariadne auf Naxos.

Naxos look very similar to any other Greek town, blue and white, traditional restaurants… a ghost town during the day. There is a castle on top of the city with a couple museums that we did not want to see, but walking around was relaxing.

Naxos is the largest of the Cyclades island group in the Aegean. It was the center of archaic Cycladic culture. The island is famous as a source of emery, a rock rich in corundum, which until modern times was one of the best abrasives available.

We found a really good and cheap traditional restaurant for lunch, I believe it was around 7 euros per person, including wine.

We had a couple more hours to kill before heading back to Paros, so we went to have some coffee at a nice place with a great view of the harbor. Naxos does not offer much more besides a few beaches around the island. 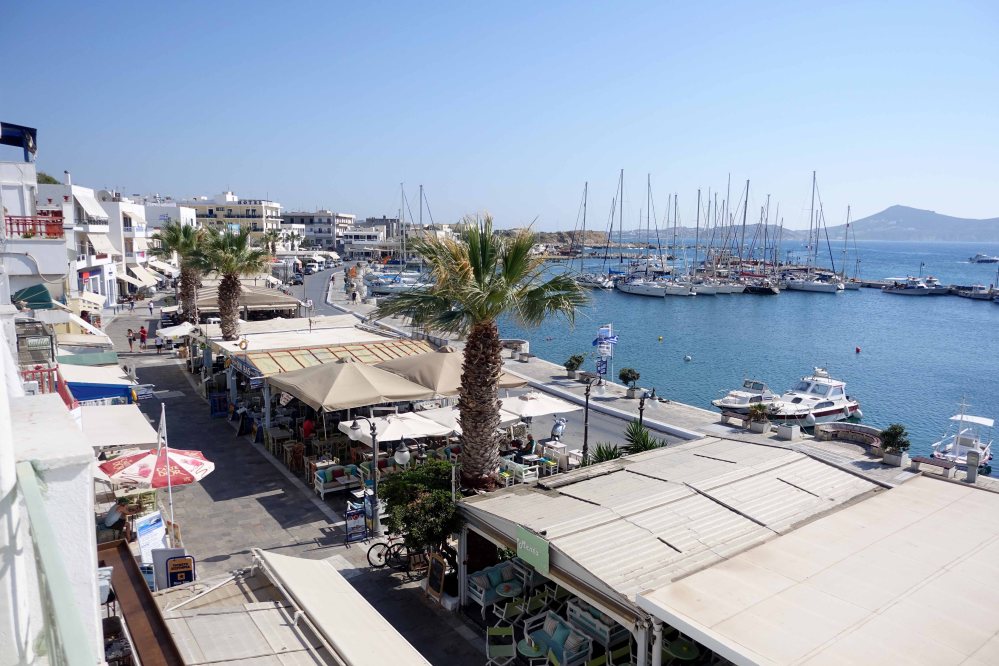 After coming back to Paros, we had dinner in one of the waterfront restaurants while enjoying the great sunset. Tomorrow we travel to Athens! 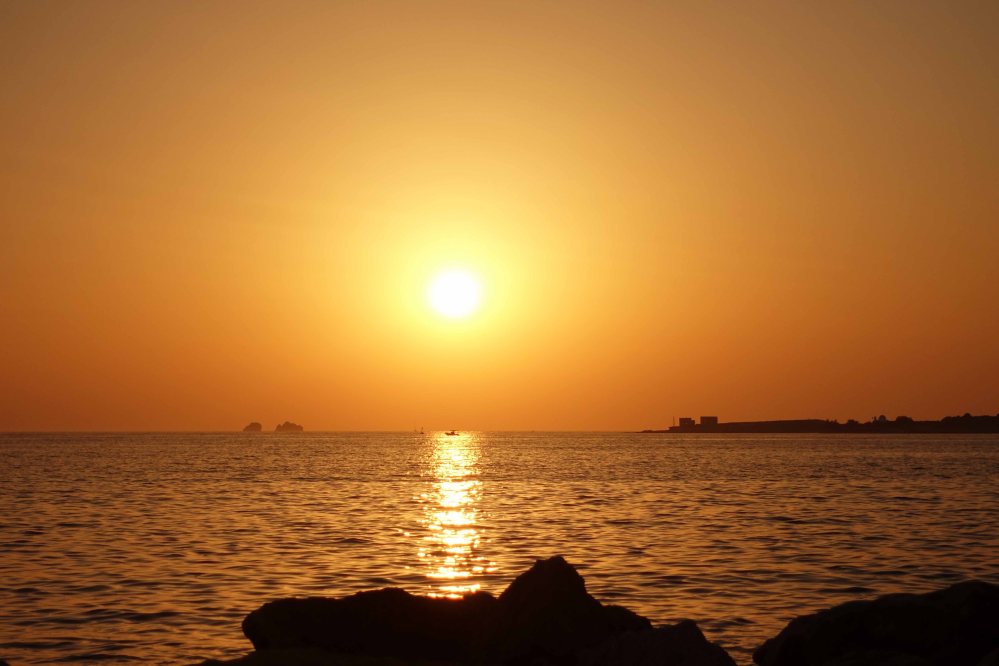 Bonus Pic Of The Day: Currency knowledge time!! Greece uses the Euro, the currency of the Eurozone issued in 2002. If you have seen Euro coins, you will notice that they have a national side indicating the country of issue (although not necessarily of minting), euro notes lack this. Instead, this information is shown by the first character of each note’s serial number. Interesting? wait for it….

For the banknotes design, each of them has a common theme of European architecture in various artistic eras. The obverse of the banknote features windows or gateways while the reverse bears different types of bridges. The architectural examples are stylised illustrations, not representations of existing monuments. 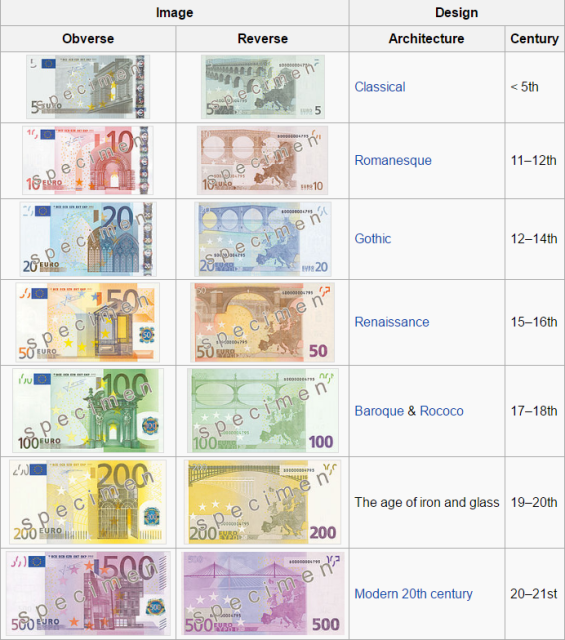