We continued our day in Oslo with a visit to the very under-the-radar National Museum. But this museum houses no less than the second most famous painting after the Mona Lisa.  You know which one it is??

The Scream!! by Edvard Munch is here. The painting had a couple people looking at it, which was nice and way more enjoyable than trying to see the Mona Lisa behind 400 Chinese tour groups that won’t move away for hours. 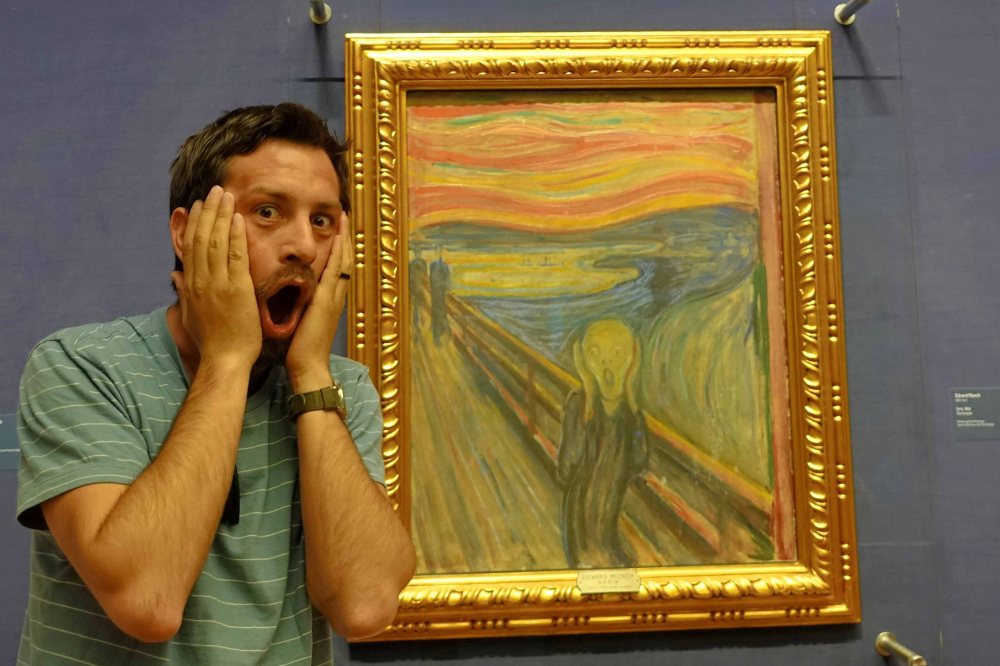 The Scream (Norwegian: Skrik) is the popular name given to multiple versions of a composition by Norwegian Expressionist artist Edvard Munch between 1893 and 1910. The German title Munch gave these works is Der Schrei der Natur (The Scream of Nature). The works show a figure with an agonized expression against a landscape with a tumultuous orange sky.

Edvard Munch created four versions in paint and pastels. The National Gallery in Oslo, Norway, holds one of two painted versions. The Munch Museum holds the other painted version and also a pastel version from 1893 (Sold for $120 Million).

The gallery exhibits other beautiful art pieces, like this exposed contemporary sculpture by famous Italian sculptor Donaldo Trumpetti, the sculpture is named “Prendila per la Figa”. If you have not practiced your Italian lately, I recommend google translate for this one.

There were other nice paintings, but after a quick walk around we were ready to go explore a little bit more of Oslo.

The national theater building. We did not see a play here. 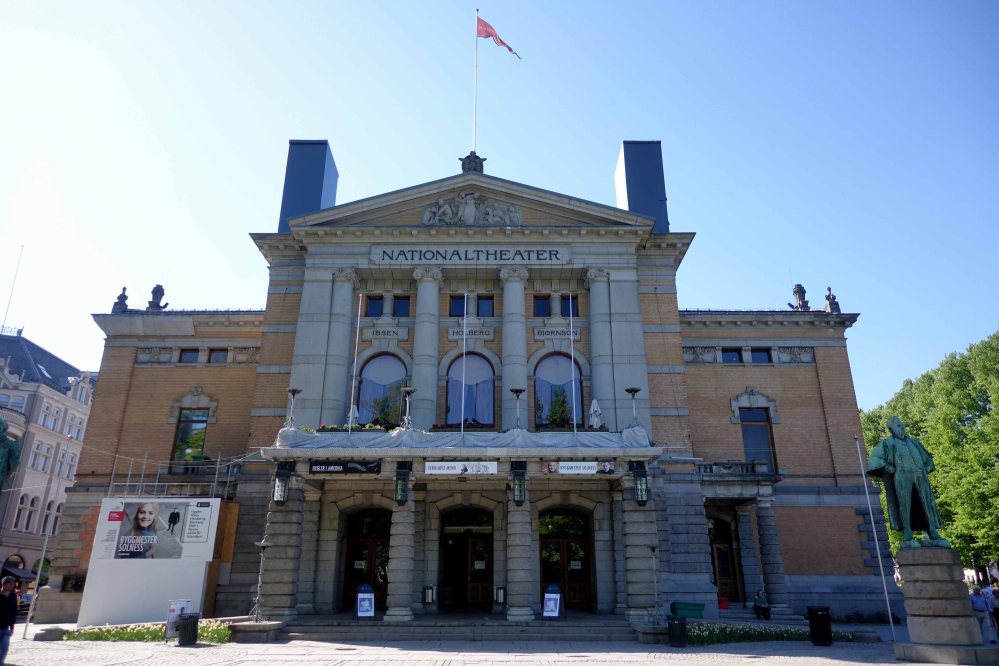 We walked around Karl Johan’s gate, where there are many outside restaurants and cafes. This is one of the only streets that were “European” as we are used to.

Beautiful to walk around here. 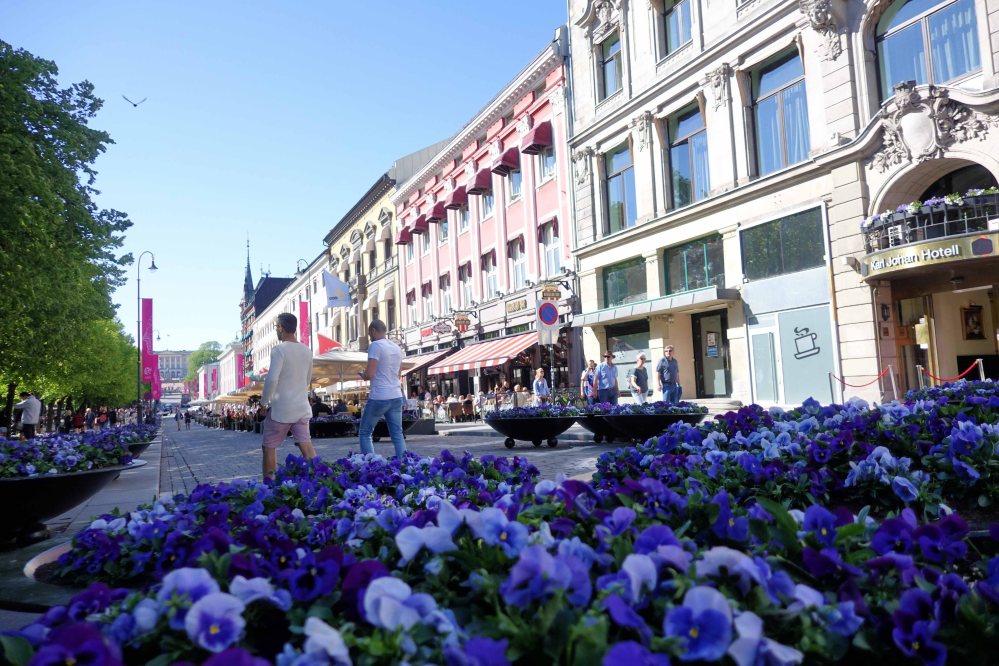 The Grand Hotel, Oslo. Each year the hotel hosts the annual Nobel Peace Prize banquet, and the prize winners stay in the Nobel suite at the hotel.

At the end of this street, we found the Norwegian Parliament. It was closed when we arrived so we were not able to tour inside. 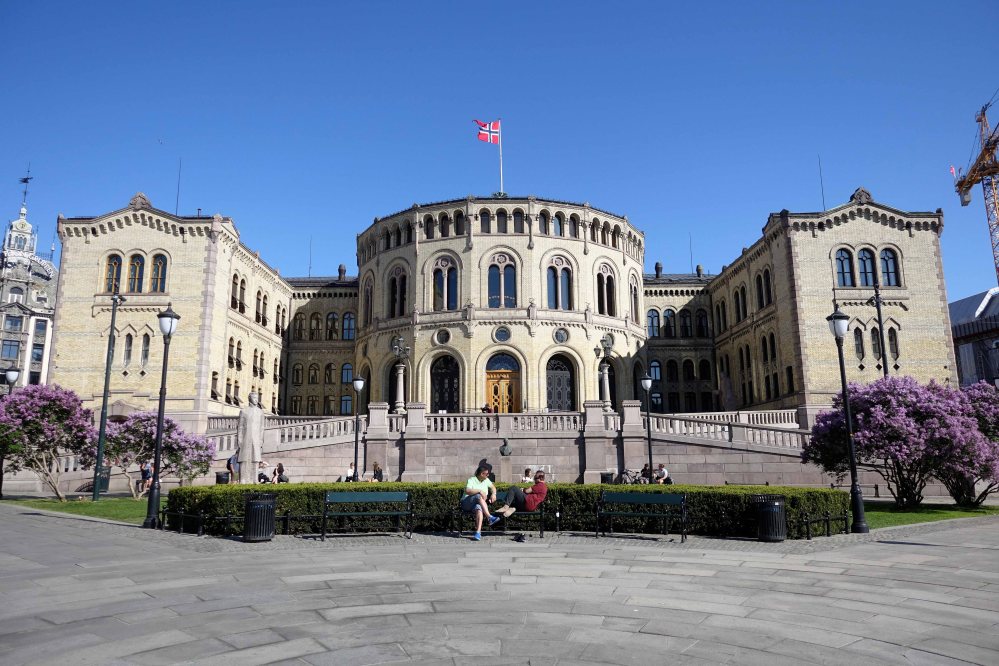 The streets around Olso are also very design oriented. This store uses IKEA furniture but customized the “facade” to make it look more luxurious. Great idea!!

A lot of galleries around downtown. 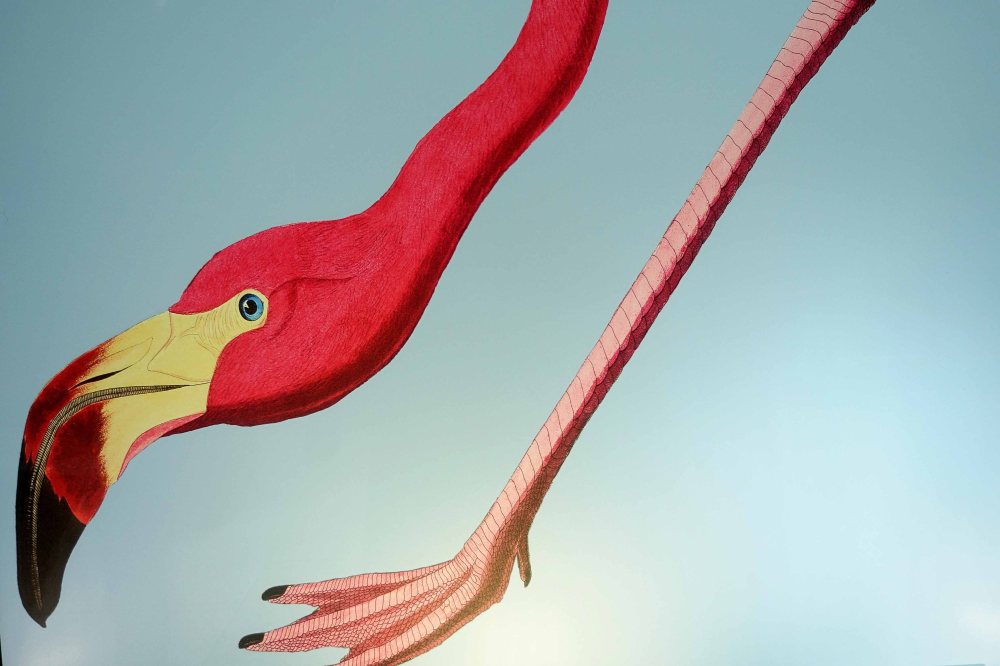 We found the hipster area!! of course they had a restaurant called “SALT”. 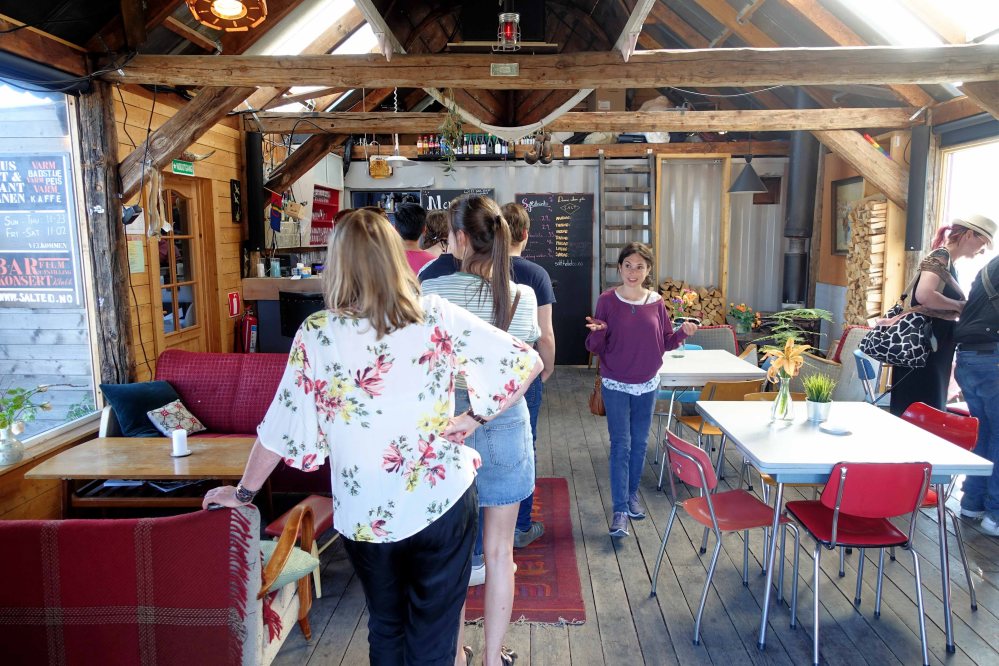 Our next stop was the Opera House, with its slogan “Please walk on the roof”, we had to take a closer look.

It is the home of The Norwegian National Opera and Ballet, and the national opera theatre in Norway,

The angled exterior surfaces of the building are covered with marble from Carrara, Italy and white granite and make it appear to rise from the water. It is the largest cultural building constructed in Norway since Nidarosdomen was completed circa 1300. 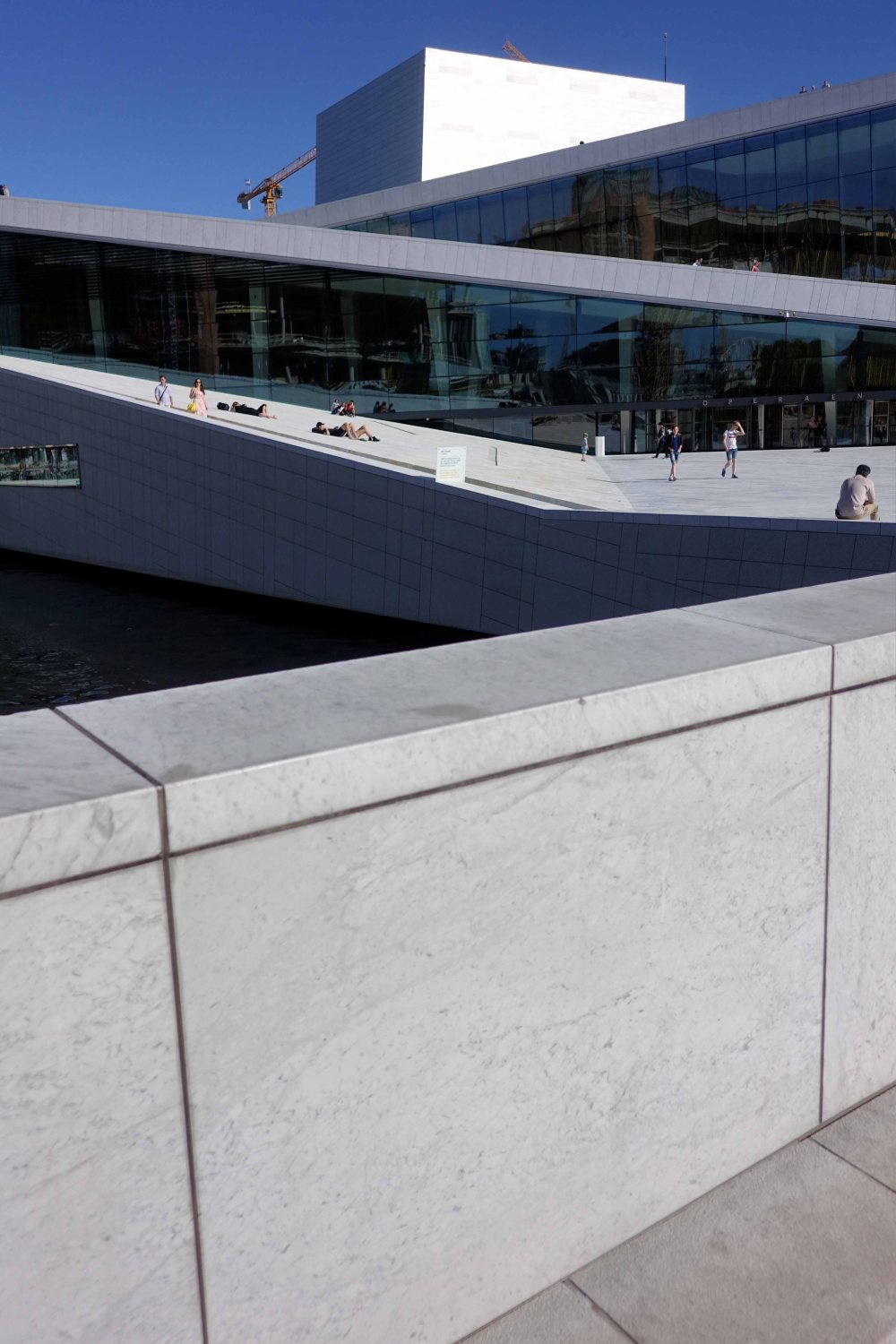 We started our walk up the roof, while teenage skaters were skating down!

The view was really nice from the top.

In 1999, after a long national debate, the Norwegian legislature decided to construct a new opera house in the city. A design competition was held and, of the 350 entries received, the judges chose that of Snøhetta. Construction started in 2003 and was completed in 2007, ahead of schedule and 300 million NOK (~US$52 million) under its budget of 4.4 billion NOK (~US$760 million). The gala opening on 12 April 2008 was attended by His Majesty King Harald, Queen Margrethe II of Denmark and President Tarja Halonen of Finland and other leaders. 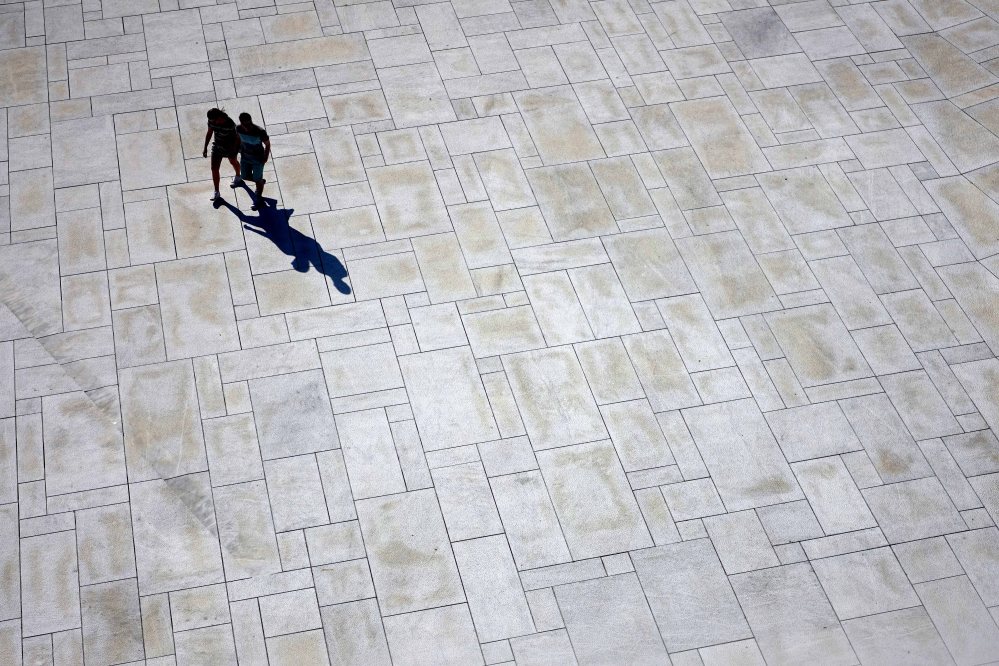 Sarita waiting for me to take all the photos. Very patient wife.

The outer walls have this beautiful pattern. The Opera House won the culture award at the World Architecture Festival in Barcelona in October 2008 and the 2009 European Union Prize for Contemporary Architecture.

We completed our tour with a quick look inside, which was nice as well.

On the way to dinner, we somehow found a street dance competition and they were giving free energy drinks!! I still don’t know how we ended up there, but it was fun to watch.

We were staaaarving. So we went to one of the best-rated restaurants in Oslo. We were poor travelers in the most expensive city in the world, so we lied that we were not hungry and just wanted to try a couple dishes.

We got an amazing bone marrow.

And some beet salad with horseradish which was really good as well.  We actually regretted not getting more food here. 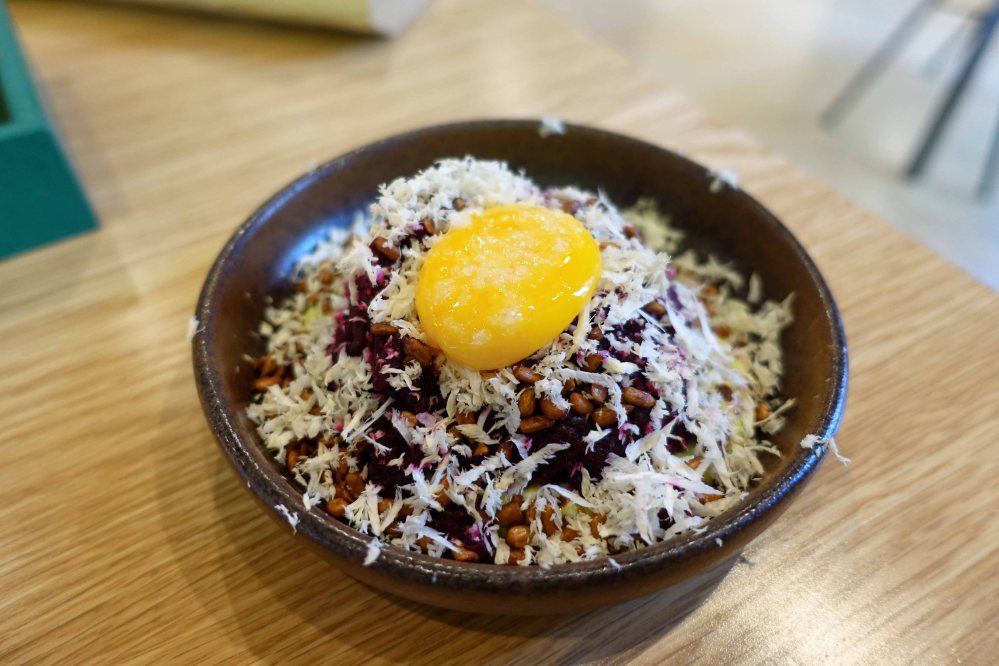 Walking back to the hotel, we found another small hipster area next to the train station.

Our night was not over, we started our walk to a local Brewery a couple of miles away. It was located in the student district, which was interesting to see and we discovered the food in those areas was very reasonably priced. Next time, that area is where we will be staying at.  We ended our night with some good old Mcdonalds to fill our bellies.

The next day we were flying back, but we had the whole morning for some more sightseeing. By now you might understand Eitan FOMO, so we took the train to the outskirts of the city to visit Holmenkollbakken (Sky Jump).

From the train station, there is a pretty rough uphill hike to the Ski Jump resort.

We tried to beat the crowds and went straight to the elevator to the top!

The hill has been rebuilt 19 times and during the Second World War, the venue was used as a military installation.

They had a huge Zipline all the way to the bottom. For some reason when we were at the top I did not think of doing it, and to this day, this is one of Eitan’s biggest regrets in life.

We went to the top of the top for the medal ceremony where Sarah won the most beautiful little thing. 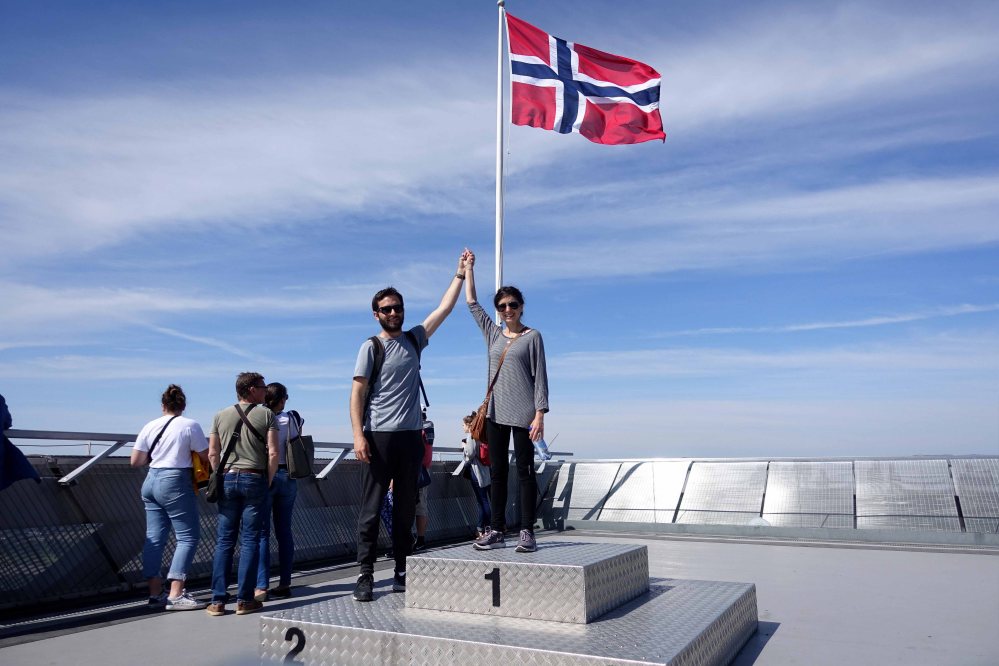 The view of the OsloFjord was fantastic from up there. The Oslofjord is not a fjord in the geological sense – in Norwegian the term fjord can refer to a wide range of waterways.

Did you know that currently there are more Norwegian descendants living in the USA than there are Norwegians in Norway.

On the ground level, there is a surprisingly amazing museum. They had a lot of memorabilia including super old skis (the ones in the photo dates from 1880), dioramas, movies, etc..

Norway is the birthplace of modern skiing. The word “ski” is Norwegian for “piece of wood”.

Skis donated by all the competition champions held here.

The Game Of Skis. 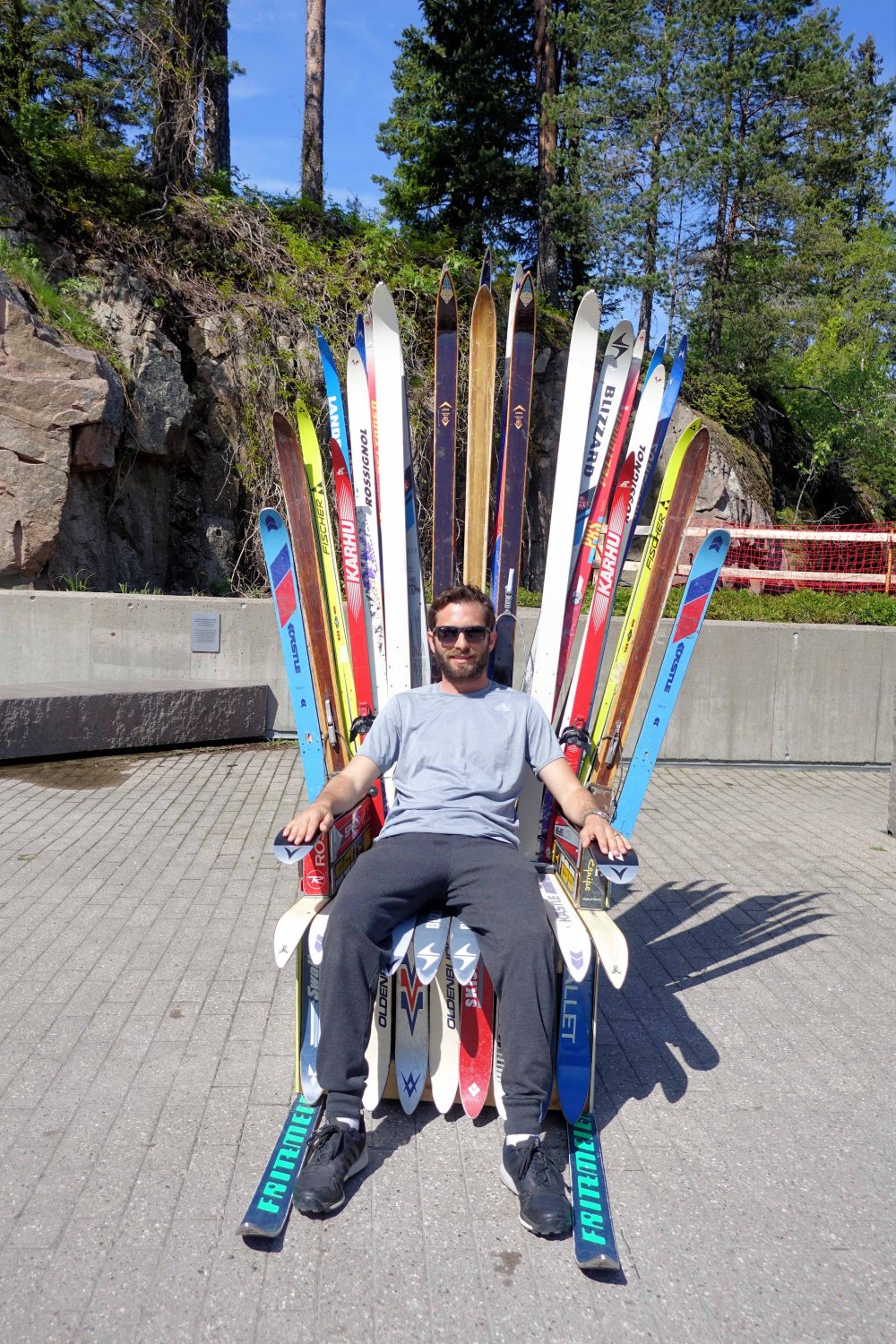 We truly enjoyed our visit to this unique place. Coming from a warm-weather place, there are not many Ski Jump structures around us.

And that was it! we took the train to the Airport for our flight back. They had a Mexican food truck inside the airport where Eitan of course had to eat  a burrito as his last meal of the trip. He needed to try the Norwegian inspired Mexican food. It was pretty good all things considered.

So this is it, we had an amazing time in Scandinavia!! stay tuned for the blog posts about Nashville and Iceland!