We finally arrived in Oslo, our last destination for our Scandinavia trip!

The hotel we stayed at was fully automated, which was something we have never seen. You get your room cards from those kiosks!

The room was really nice for our standards, we were exhausted from the Fjords day  but were still a bit hungry so walked to a close by Mcdonalds for a late night meal.  While there we witnessed police kick some teenagers out of the McDonalds.  It appeared there was a drug deal occurring  (didn’t provide the best first impression of this city).

Our super long day sightseeing Oslo began with a walk to the ferry station in order to visit the museum island, where most of the most important  Oslo museums are located.  The City so far was not very impressive, it did not have the “European” look we expected and buildings looked mostly dull and square.

There were only a couple of streets with beautiful buildings and stores, but that is about it. A little disappointing.

You have the option to buy roundtrip tickets for the ferry, but we decided to just buy a one way and walk back. A looooong walk was awaiting us. 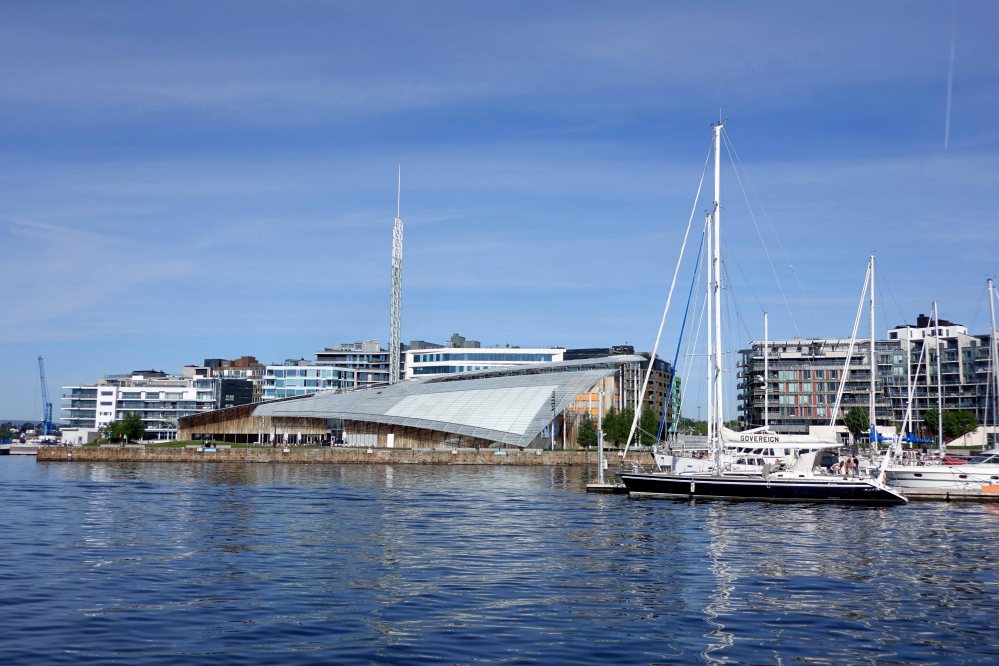 Our first museum was the Kon-Tiki museum, if you have never heard of this before, I encourage you to read about it or to see the Oscar winning documentary.  The Kon-Tiki expedition was a 1947 journey by raft across the Pacific Ocean from South America to the Polynesian islands, led by Norwegian explorer and writer Thor Heyerdahl. The raft was named Kon-Tiki after the Inca sun god, Viracocha, for whom “Kon-Tiki” was said to be an old name

Heyerdahl believed that people from South America could have settled in Polynesia in pre-Columbian times. His aim in mounting the Kon-Tiki expedition was to show, by using only the materials and technologies available to those people at the time, that there were no technical reasons to prevent them from having done so. Although the expedition carried some modern equipment, such as a radio, watches, charts, sextant, and metal knives, Heyerdahl argued they were incidental to the purpose of proving that the raft itself could make the journey. 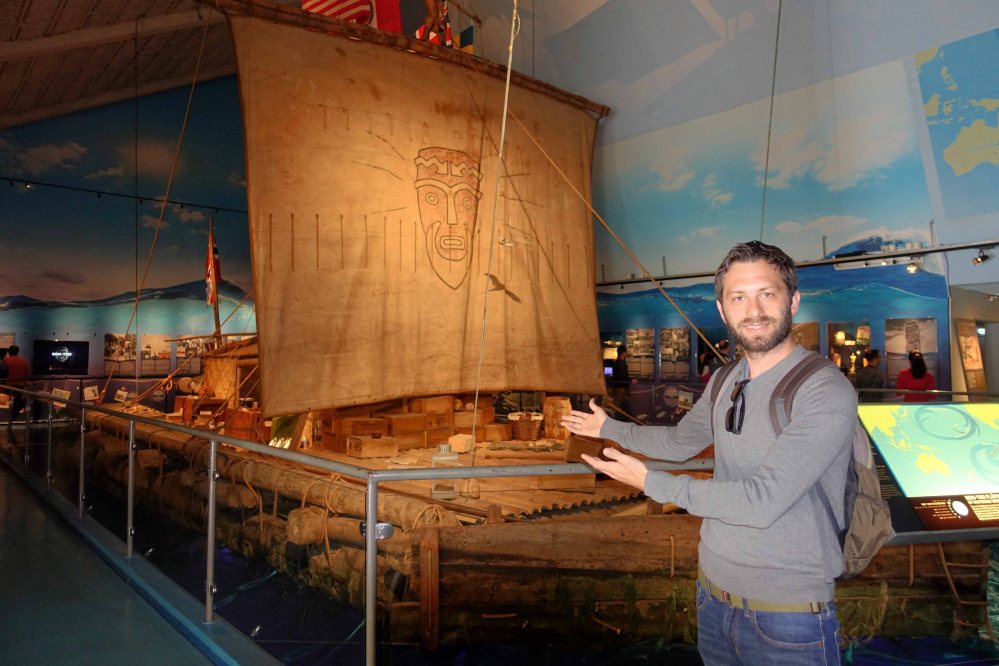 The Kon-Tiki expedition was funded by private loans, along with donations of equipment from the United States Army. Heyerdahl and a small team went to Peru, where, with the help of dockyard facilities provided by the Peruvian authorities, they constructed the raft out of balsa logs and other native materials in an indigenous style as recorded in illustrations by Spanish conquistadores. The trip began on April 28, 1947. Heyerdahl and five companions sailed the raft for 101 days over 6,900 km (4,300 miles) across the Pacific Ocean before smashing into a reef at Raroia in the Tuamotus on August 7, 1947. The crew made successful landfall and all returned safely. 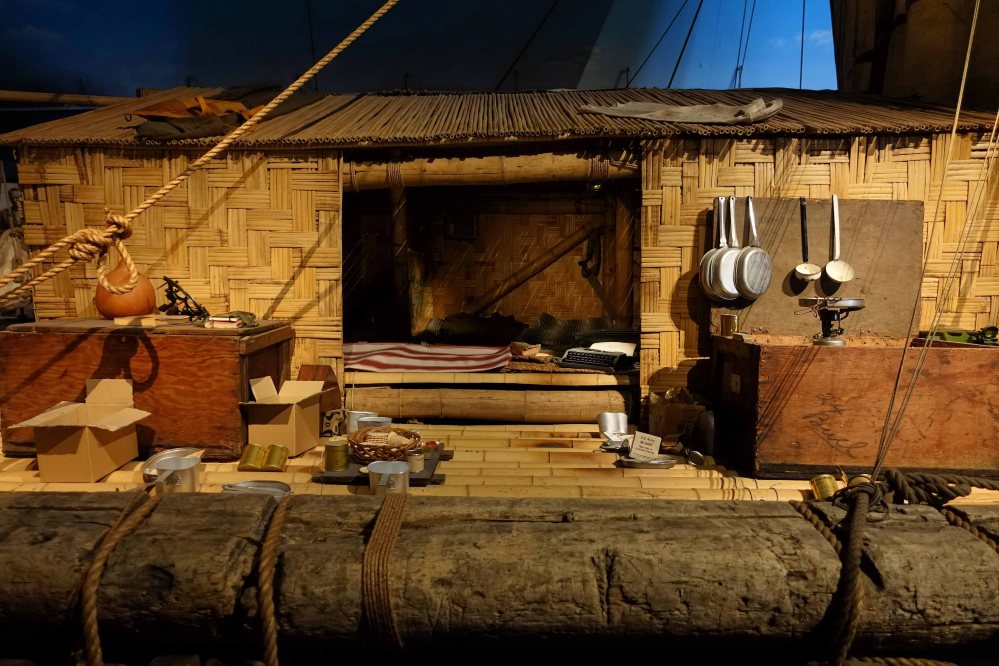 In 1969 and 1970, Heyerdahl built two boats from papyrus and attempted to cross the Atlantic Ocean from Morocco in Africa. Based on drawings and models from ancient Egypt, the first boat, named Ra (after the Egyptian Sun god), was constructed by boat builders from Lake Chad using papyrus reed obtained from Lake Tana in Ethiopia and launched into the Atlantic Ocean from the coast of Morocco. 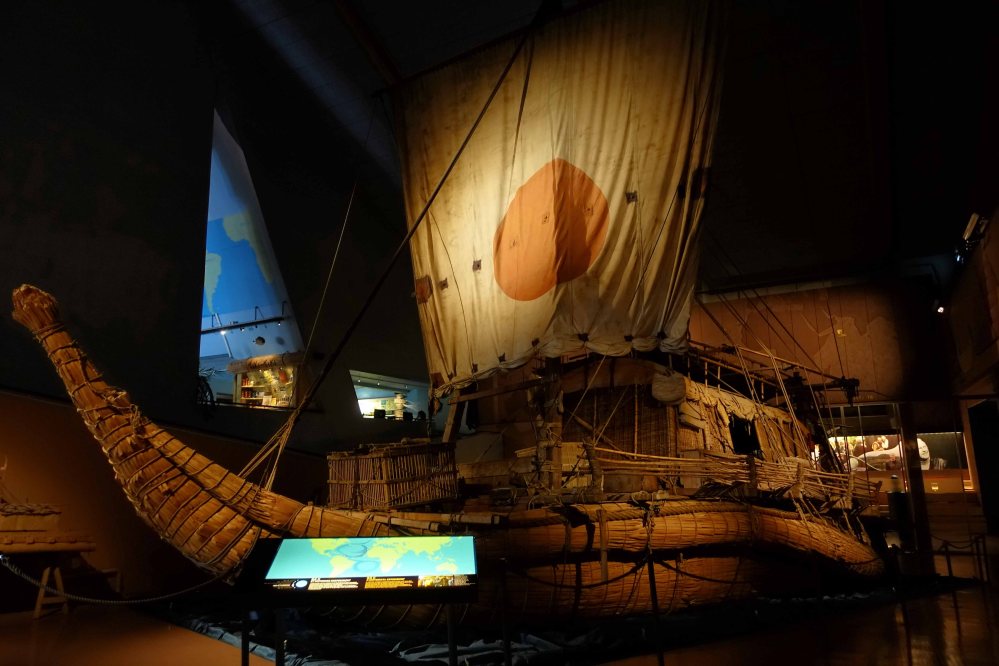 The boat became lost and was the subject of a United Nations search and rescue mission. The search included international assistance including people as far afield as Loo-Chi Hu of New Zealand. The boat reached Barbados, thus demonstrating that mariners could have dealt with trans-Atlantic voyages by sailing with the Canary Current.

Apart from the primary aspects of the expedition, Heyerdahl deliberately selected a crew representing a great diversity in race, nationality, religion and political viewpoint in order to demonstrate that at least on their own little floating island, people could cooperate and live peacefully. Additionally, the expedition took samples of marine pollution (mostly oil chunks) and presented their report to the United Nations. In 1972, the international community passed a ban on dumping of waste oil in open seas!

We walked a couple miles to the next museum. The neighborhood was beautiful with most of the  houses painted white with black roofs.

The next stop was the Oslo’s crown jewel museum. The Viking Ship Museum!!! this museum houses several Viking ships found in burial sites found around Scandinavia.

The Oseberg ship is a well-preserved Viking ship discovered in a large burial mound at the Oseberg farm near Tønsberg in Vestfold county, Norway. This ship is commonly acknowledged to be among the finer artifacts to have survived from the Viking Era.

The Oseberg burial mound contained numerous grave goods and two female human skeletons. The ship’s internment into its burial mound dates from AD 834, but parts of the ship date from around 800, and the ship itself is thought to be older. The ship is a Karve, clinker built almost entirely of oak. It is 21.58 m long and 5.10 m broad, with a mast of approximately 9–10 m. With a sail of c. 90 m², the ship could achieve a speed up to 10 knots. The ship has 15 pairs of oar holes, which means that 30 people could row the ship. 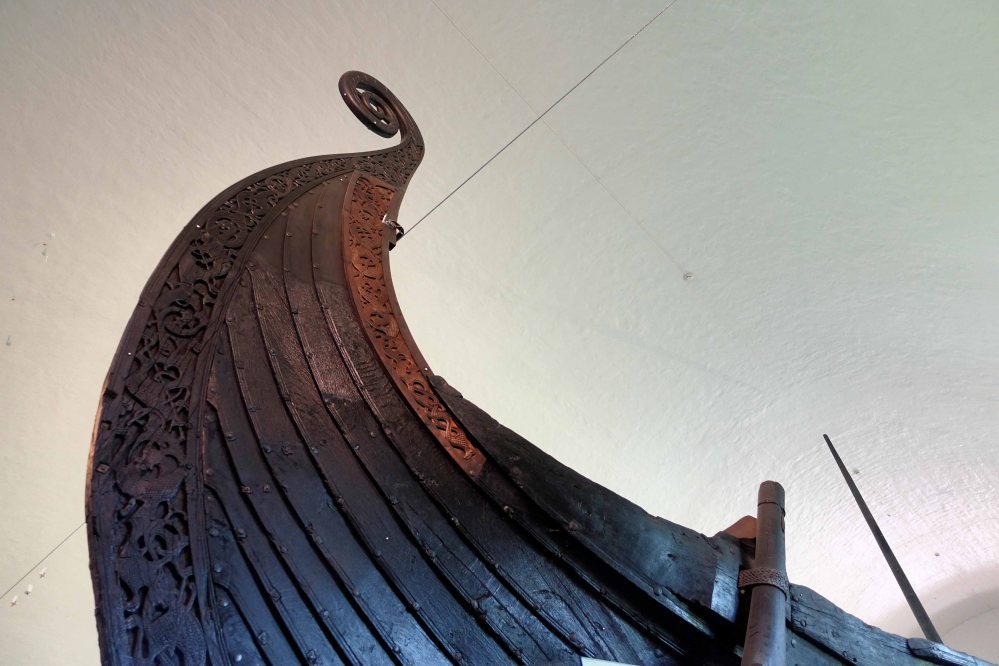 The bow and stern of the ship are elaborately decorated with complex woodcarvings in the characteristic “gripping beast” style, also known as the Oseberg style. 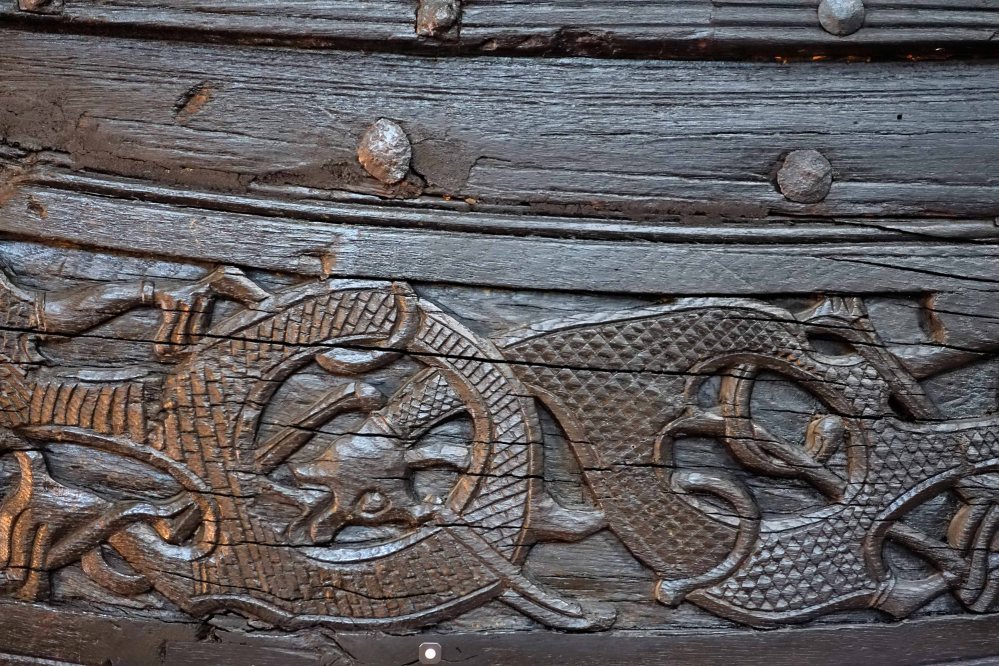 The museum exhibits also include normal Viking artifacts like boots, weapons, and jewelry.

They also have a human skeleton that shows a clean bone cut from battle! bye bye leg.

The Gokstad ship is a 9th-century Viking ship found in a burial mound at Gokstad in Sandar,  Norway.  It is the largest preserved Viking ship in Norway 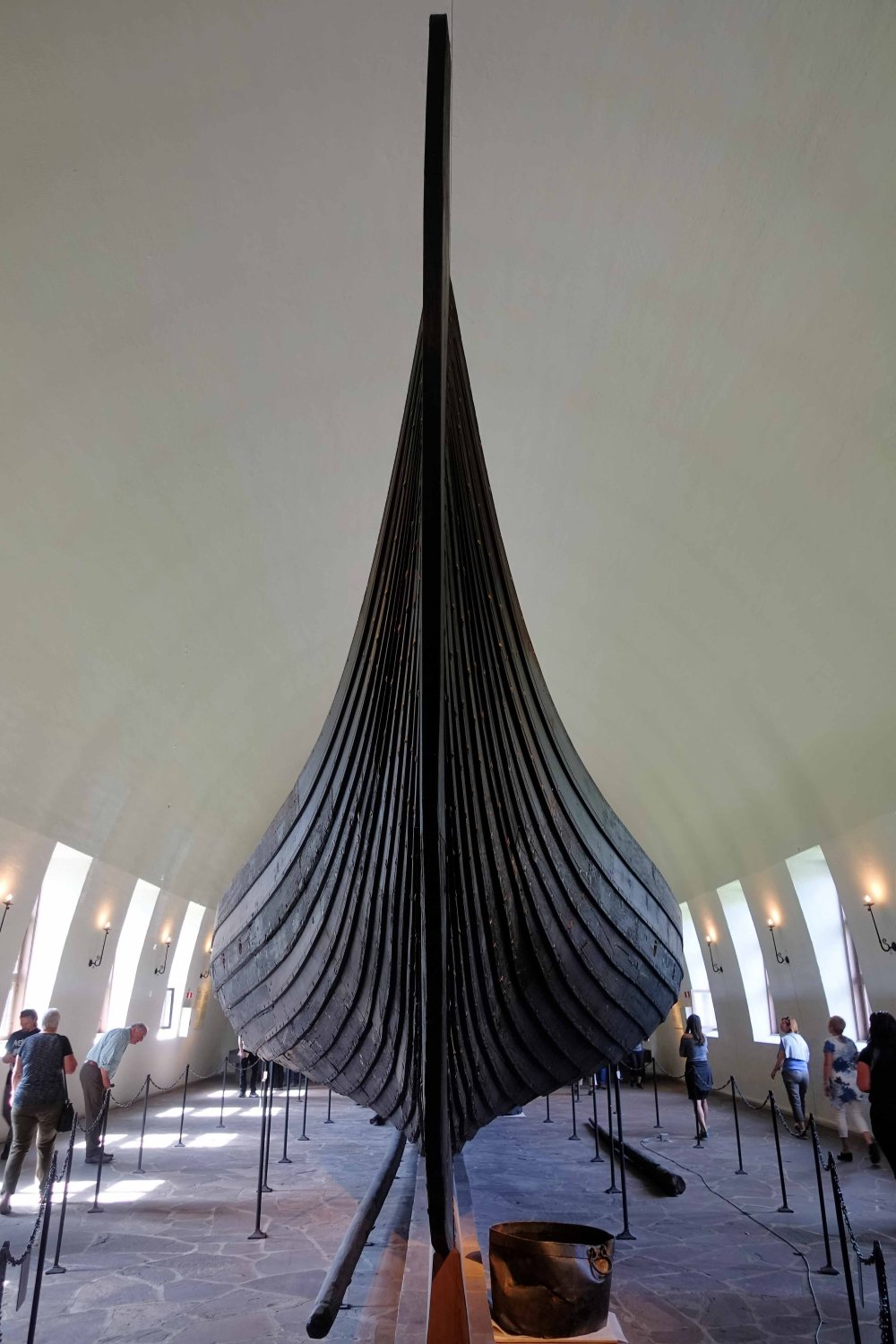 The ship was built of timber that was felled around 890 AD. This period is the height of Norse expansion in Dublin, Ireland and York, England. The Gokstad ship was commissioned at the end of the 9th century during the reign of King Harald Fairhair. The ship could carry a crew of 40 men but could carry a maximum of 70. 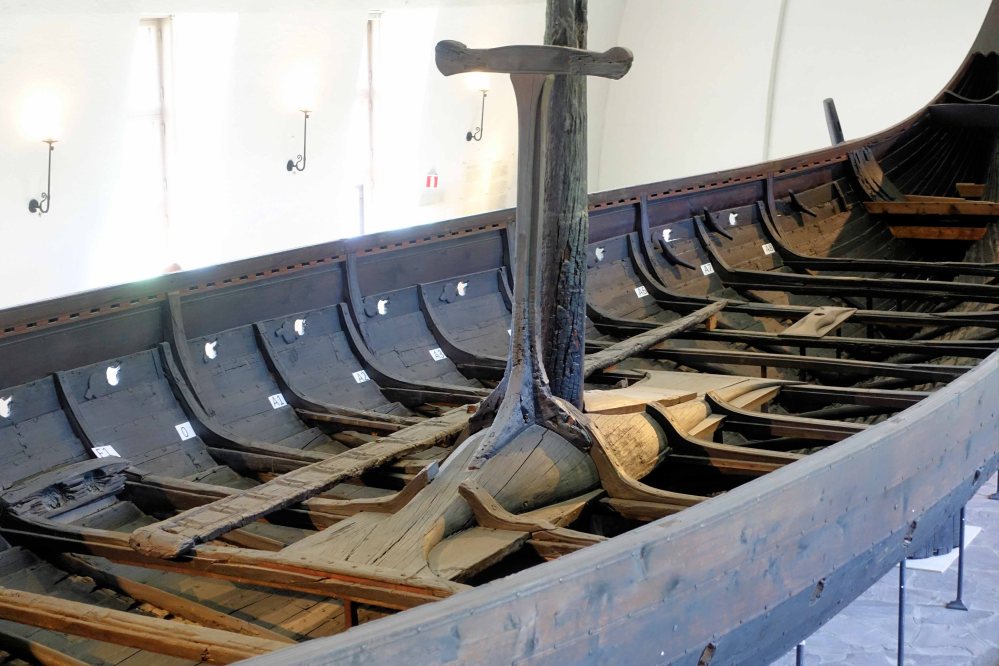 They have an audiovisual presentation of the history of the Vikings projected into the walls. It was ok. 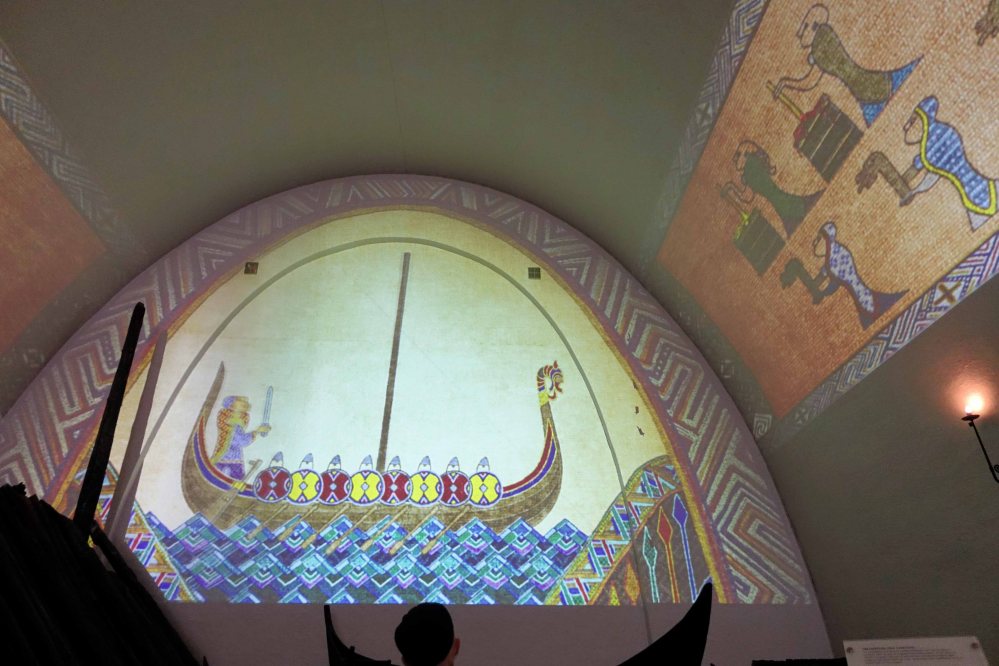 The third ship,  the Tune ship, is of the Karve, a small type of longship with broad hull. The ship was built around AD 900. It was made principally of clinkered oak planks.

This is a photo of the burial site when they discovered one of the ships. 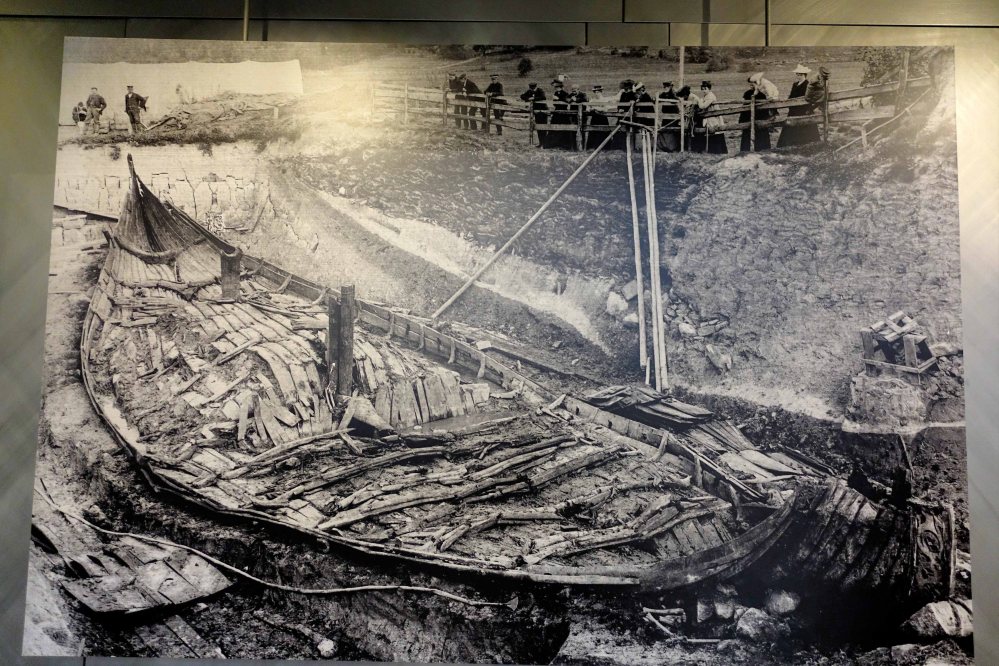 After the museum we needed to walk back to the city, but not without a mango  ice cream first!

The walk back was beautiful. 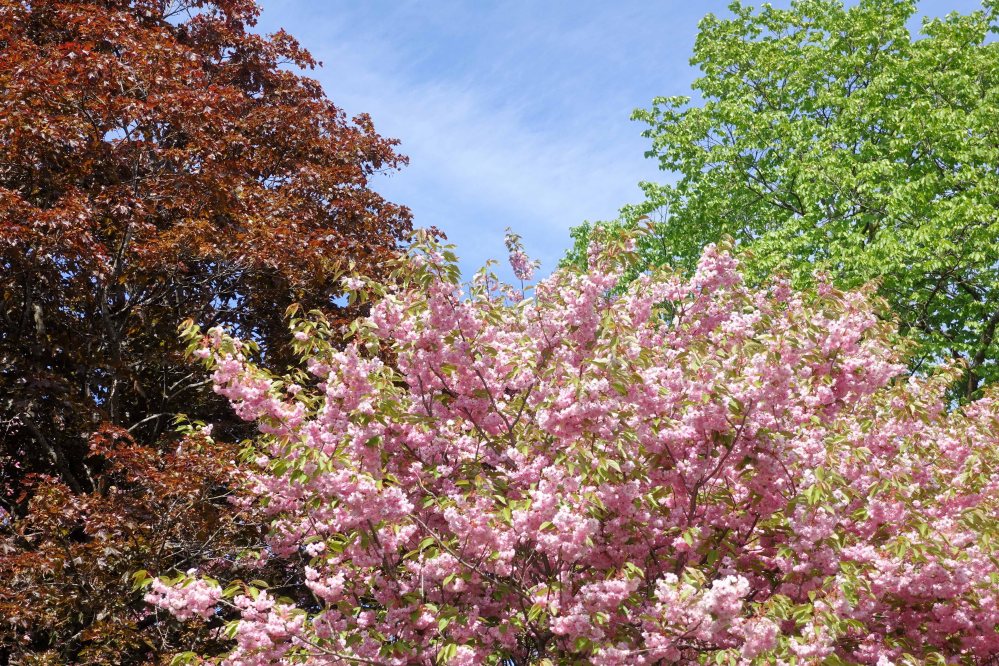 We walked through many parks and farms. This is where the locals come to exercise and be in touch with nature!

The next stop was Frogner Park, which contains the well-known Vigeland installation, a permanent sculpture installation created by Gustav Vigeland between 1924 and 1943. 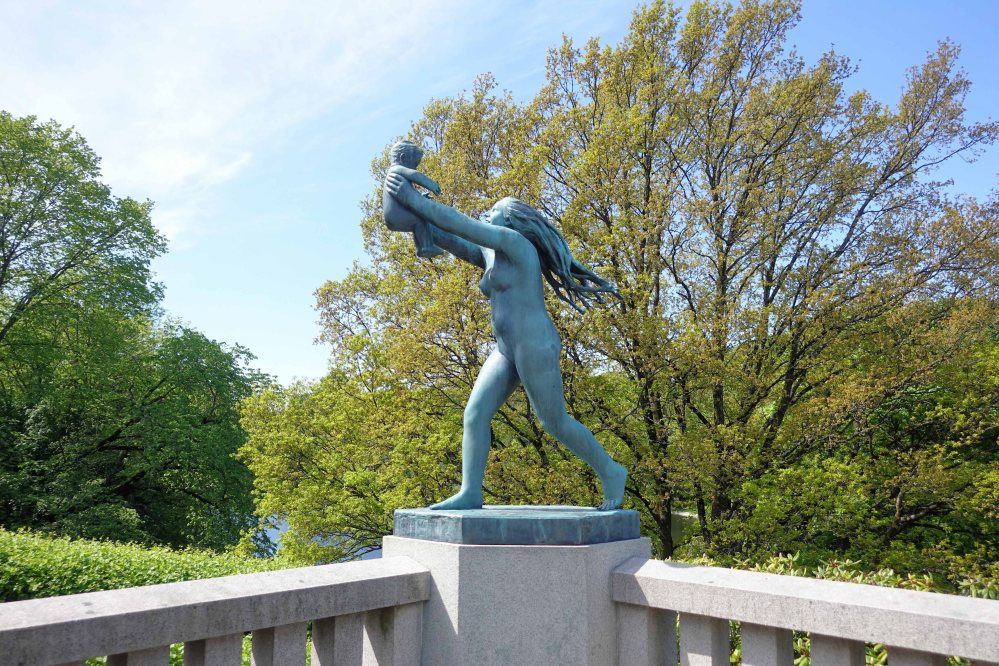 Frogner Park is the largest park in the city and covers 45 hectares;  the sculpture installation is the world’s largest sculpture park made by a single artist. 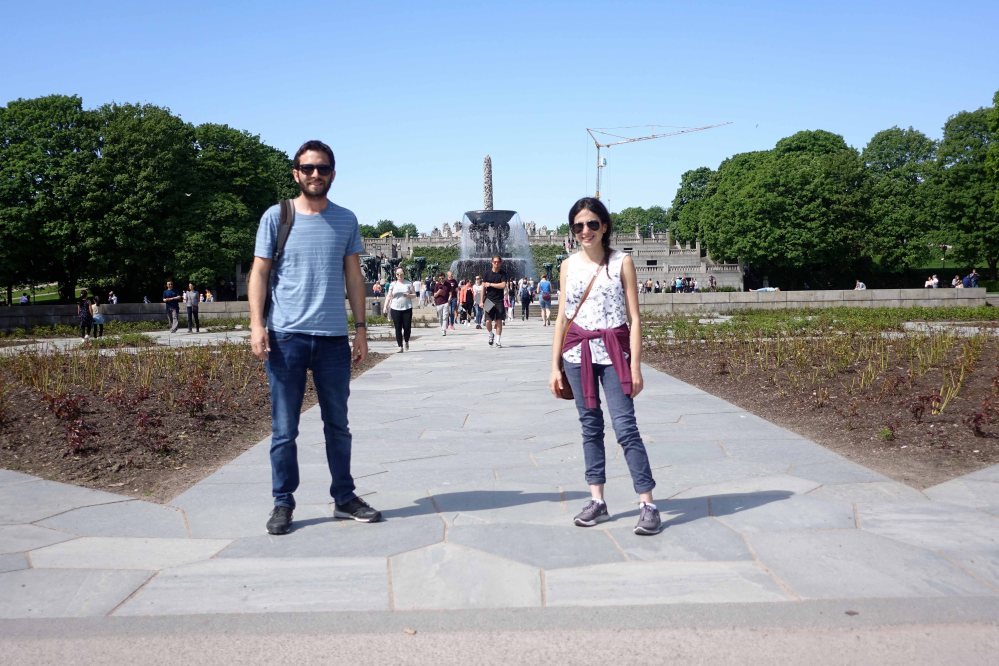 There are a total of 212 bronze and granite sculptures. On the highest point of the park, on the Monolith Plateau, rise circular stairs towards the Monolith. with 121 figures, is 14.12 m and the total height. The Monolith was carved from one single granite block, hence the name (mono: one, litho: stone). Whereas the melancholy theme in the fountain is the eternal life cycle, according to the artist, the column gives room to a totally different interpretation: Man’s longing and yearning for the spiritual and divine. 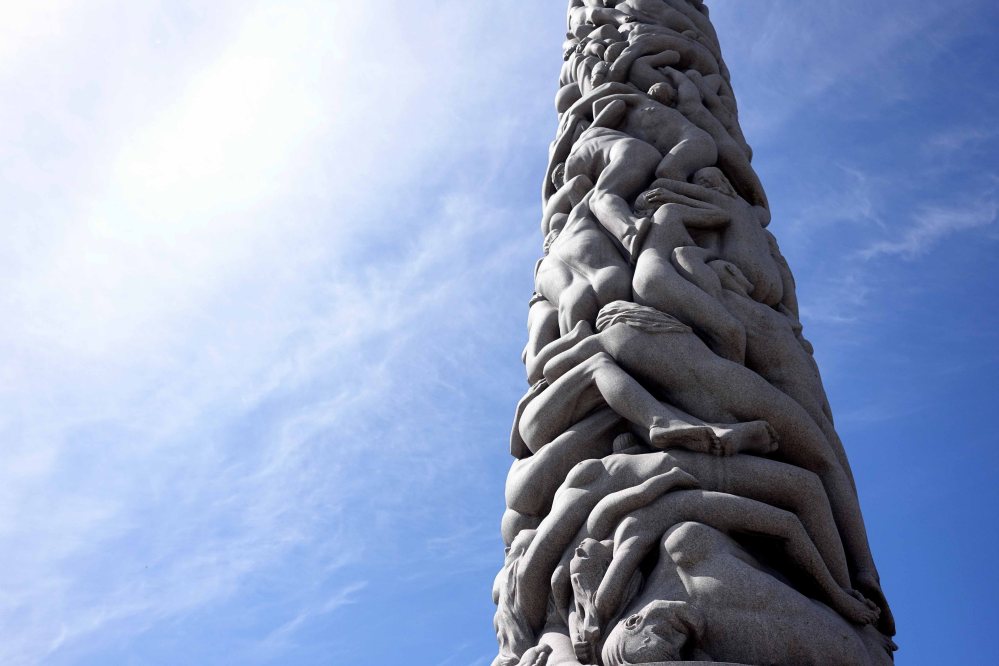 Frogner Park is the most popular tourist attraction of Norway, with between 1 and 2 million visitors each year, and is open to the public at all times. 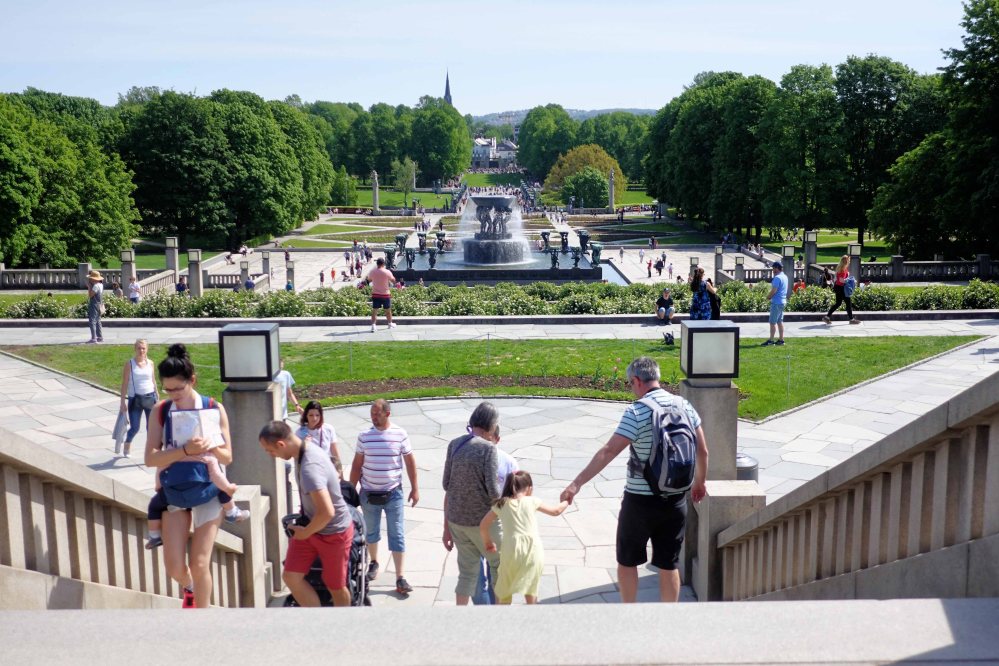 Everybody is trying to copy the sculptures, so we found one as well! 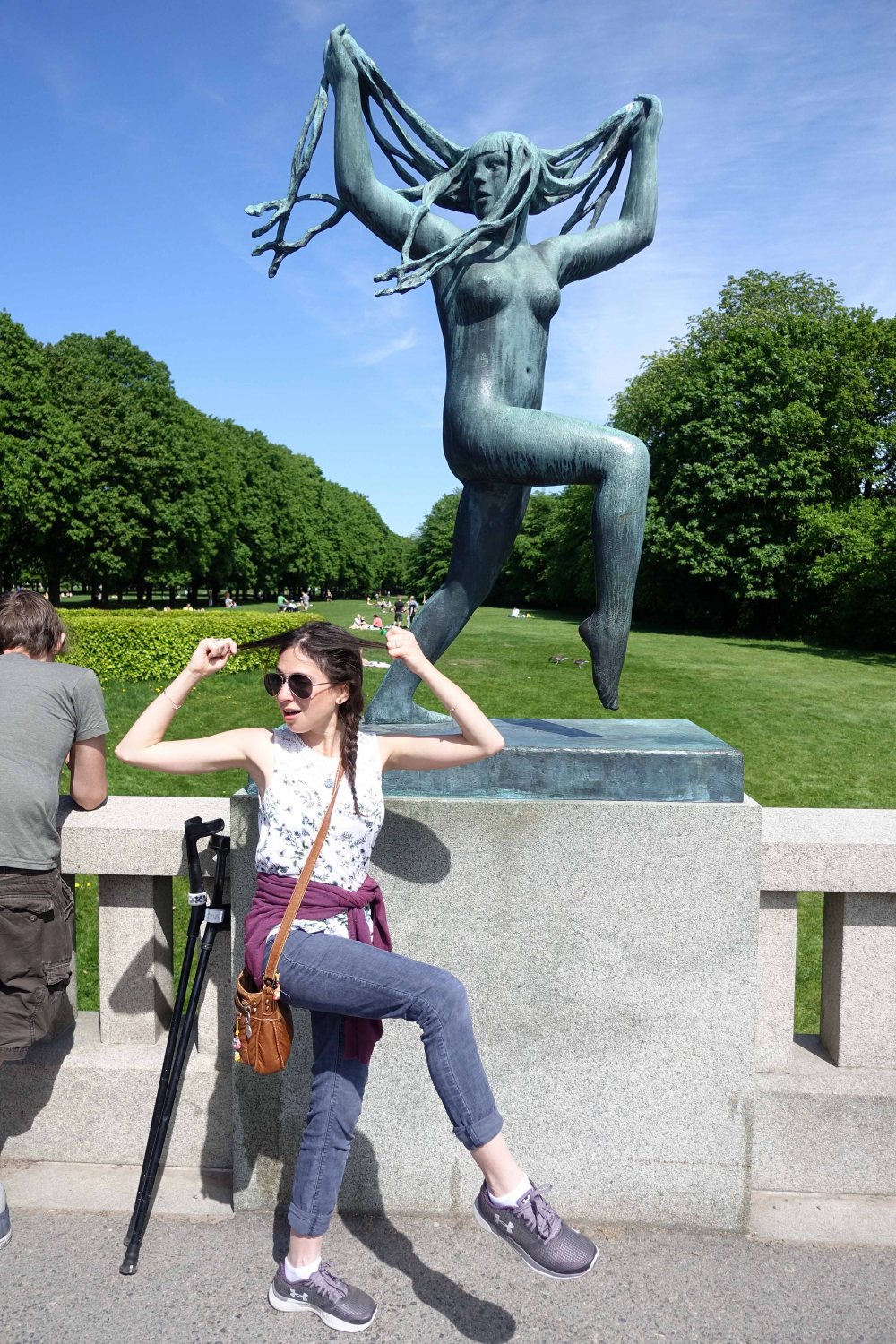 After a quick hydration break, we were starting to get hungry.

We heard sushi is amazing here, so had to try it! we found a local “cheap” sushi place where we still spent a large amount of money for very little food. At the end of the day, we are in Norway, which is one of the most expensive places to be traveling around. 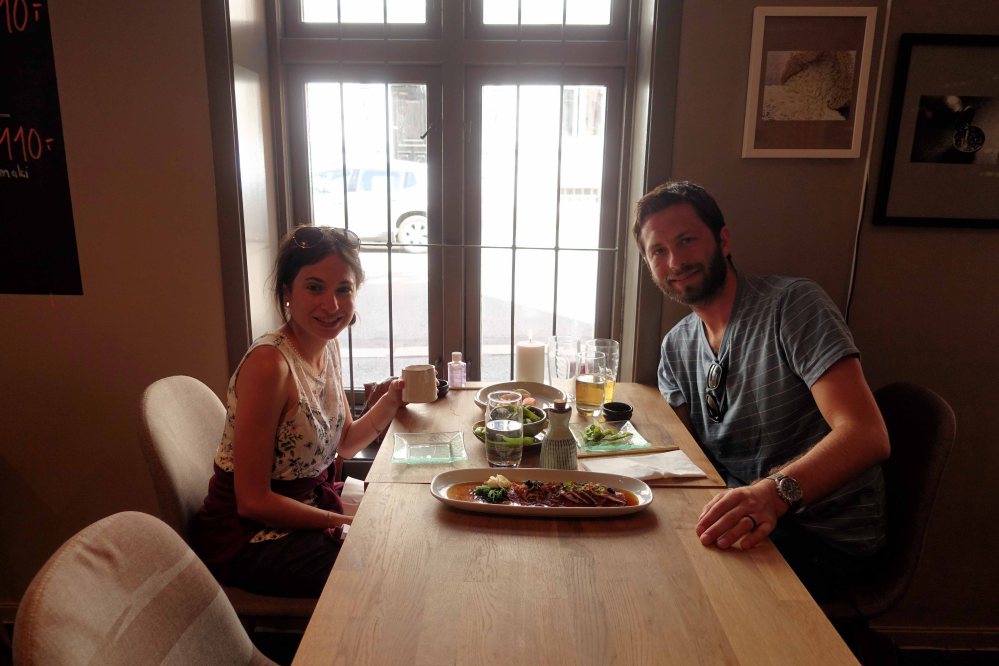 The sushi was superb.  Interestingly, spicy tuna in Norway does not mean the same as in the U.S…. They use big chunks of tuna (like poke) with some sriracha sauce. We also got some lime-chili seared tuna.

We walked around one of the fanciest neighborhoods in Oslo. Beautiful!

We noticed that Scandinavian countries do not have a large selection of candies, which is very sad and concerning. How are these people happy?  The only thing that kept us going were these candies called “Lakerol”. They have a few flavors, but most of them are liquorice style. Not bad, not good either, but we adapted to survive.

With a good candy selection on our hands, we continued to the Royal Palace!

The Royal Palace in Oslo was built in the first half of the 19th century as the Norwegian residence of the French-born King Charles III of Norway, who reigned as king of Norway and Sweden. 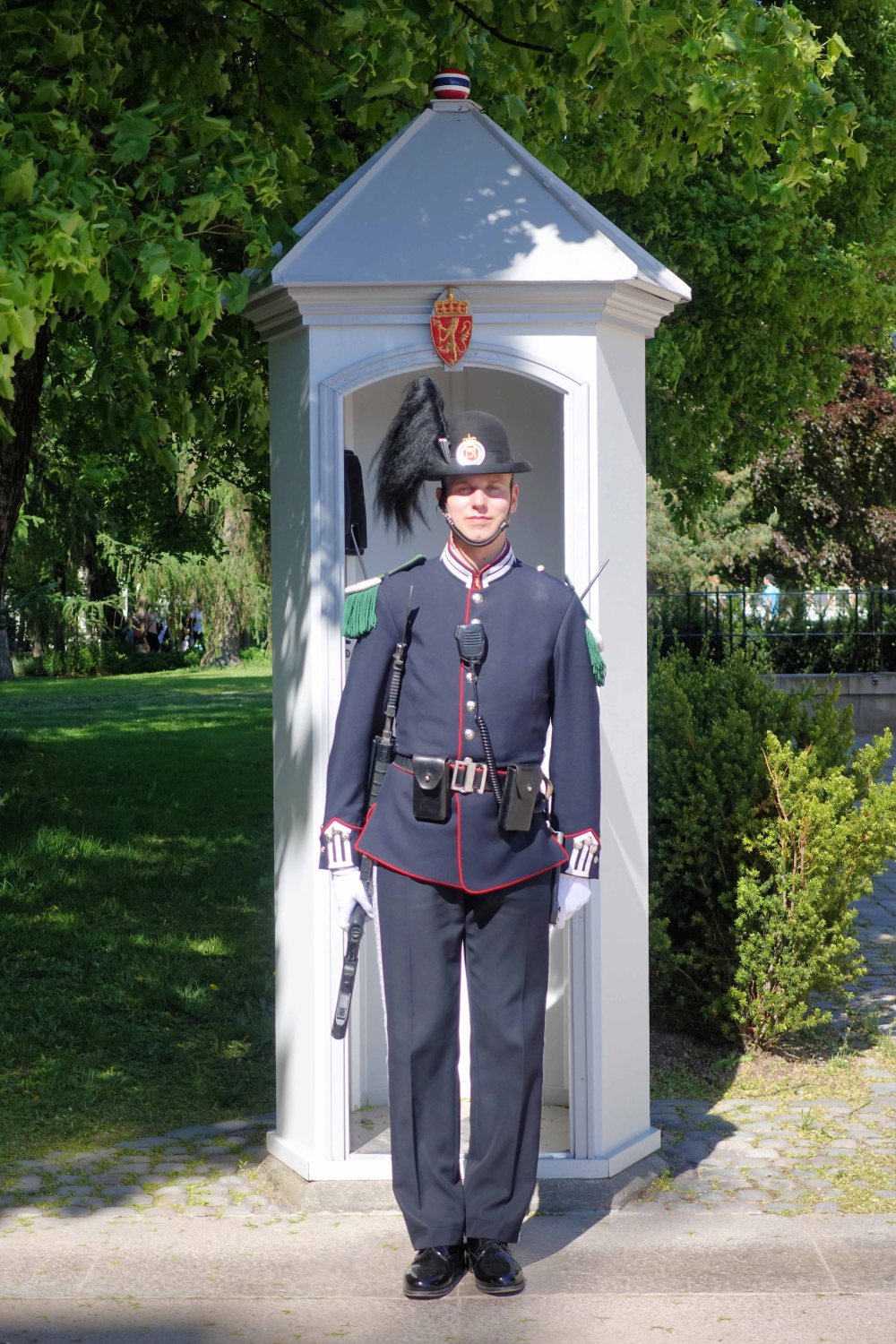 The palace is the official residence of the current Norwegian monarch while the Crown Prince resides at Skaugum in Asker west of Oslo.

I separated this day in 2 blog post because otherwise, it would be really long! to be continued…..

Bonus Pic Of The Day: Need to poo while walking in the part? no need to worry, with these technologically advanced public toilets!! they even have one-way windows so you can enjoy watching people walk their dog while you test the plumbing.