After our strange and curious day in Lisbon during which Sarah & Eitan and Elly & Dan did their own things, we rejoined forces to go to Sintra, a fairy-tale town just 20 miles outside of Lisbon.

Unfortunately, fairy-tale towns don’t have a lot of fairy-tale parking, so we struggled to find a lot, finally locating one by the train station, with Dan almost driving through the barrier arm at the entrance before it had lifted (he did these things so Eitan would experience some of the excitement of riding in India).

Sintra is known for its many 19th-century Romantic architectural monuments, which has resulted in its classification as a UNESCO World Heritage Site. We walked about a mile into the town, where things got very quaint and charming. 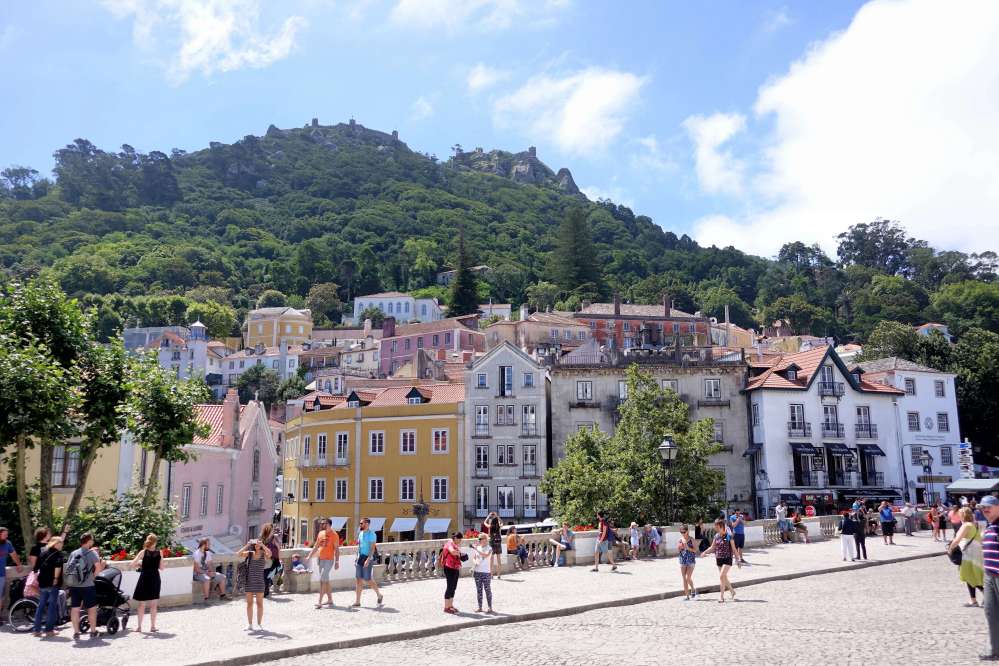 In the center of Sintra is a big palace with unusual conical chimneys, and lurking above the town is a 10th-century Moorish castle.

We took the tour of the palace. The thousand-year-old history of the Palace of the Town of Sintra began during the Muslim occupation of the Iberian Peninsula.

Already mentioned in texts from the 11th century, the original Moorish Palace became the property of the Portuguese Crown after the conquest of the city of Lisbon by Afonso Henriques, the first King of Portugal, in 1147

Of all the palaces built by the Portuguese monarchs throughout the Middle Ages, only the Palace of Sintra has survived to the present day virtually intact, still maintaining the same essential features of its shape and outline since the mid-16th century. 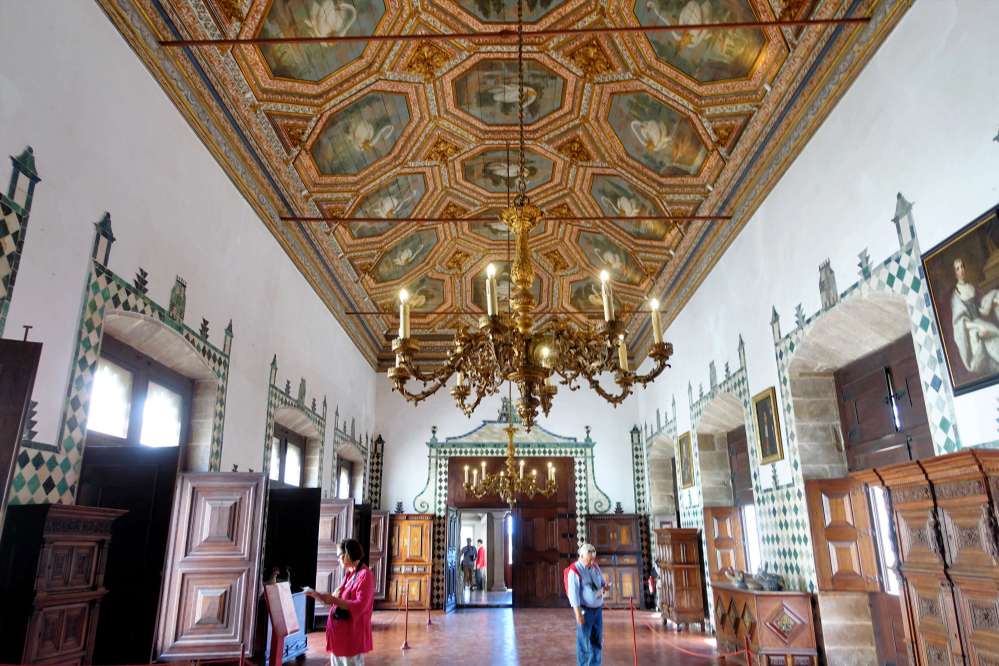 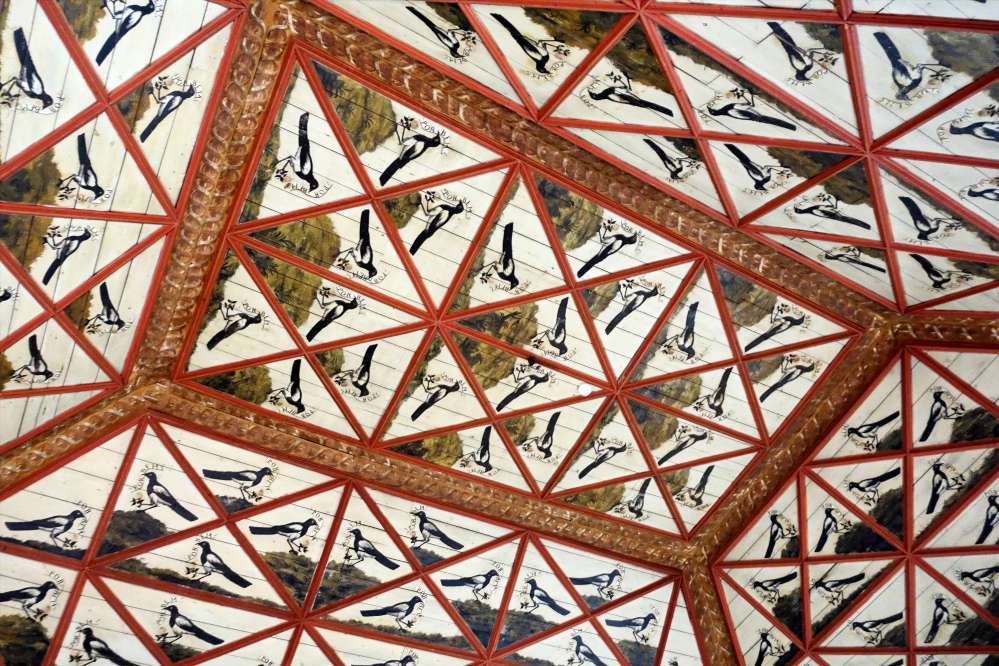 There was a beautiful room full of azulejos. 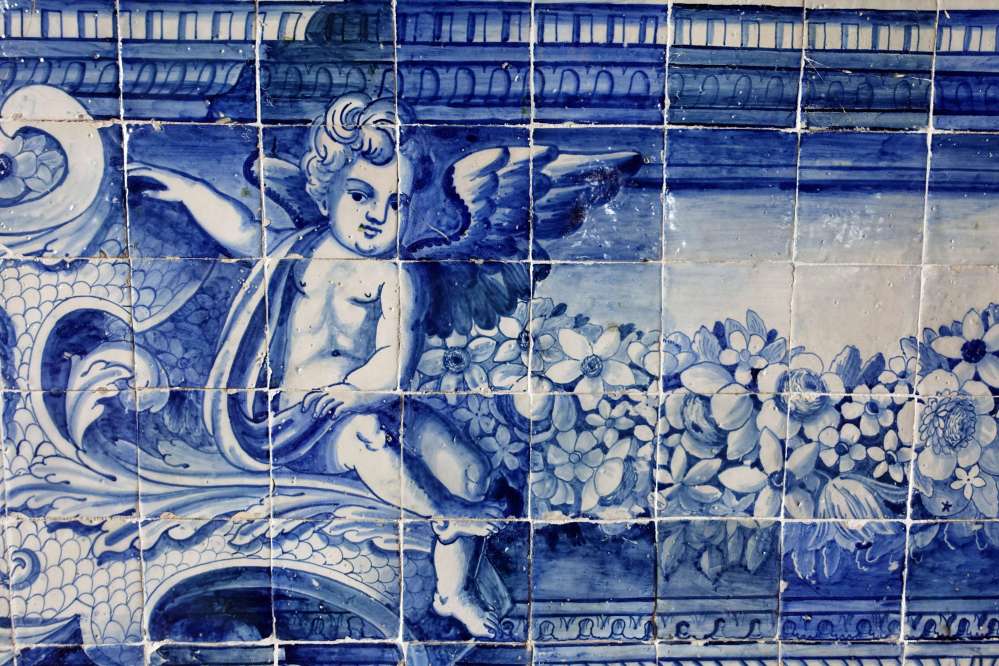 Dan then got in line for the bus up to the Pena Palace. The line was very very long, so we decided it was worth it to be driven to the palace in a Citroen convertible for twice the price and twice the fun. This turned out to work out very well, since the bus required a roundtrip ticket and we ended up walking back. 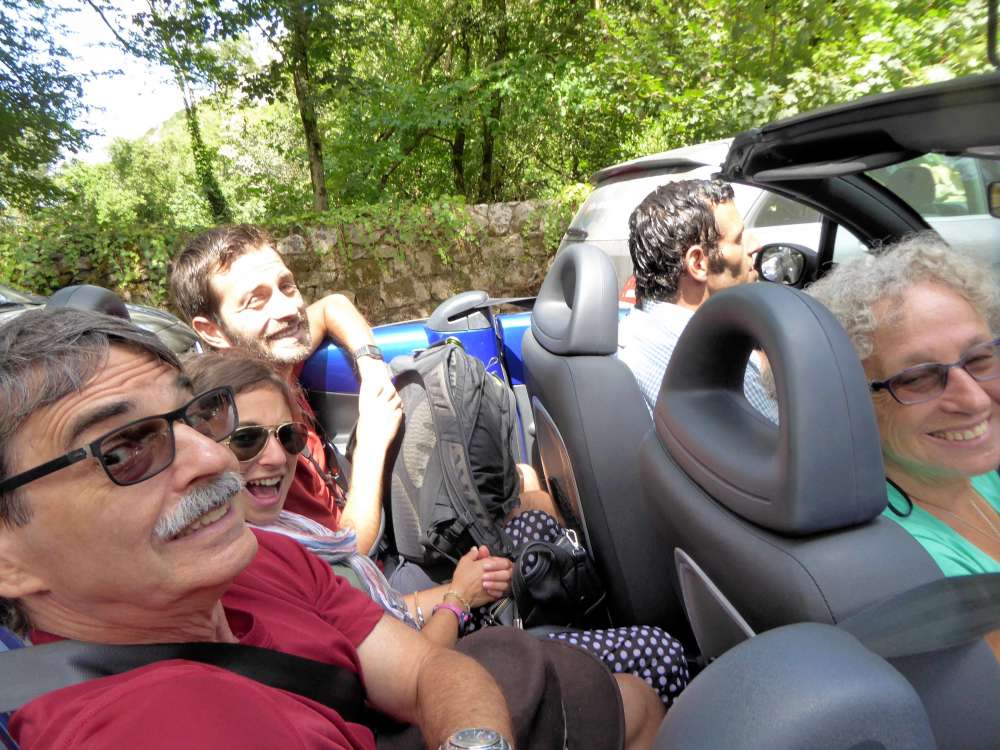 After being dropped off, we still had to hike up to the palace itself, which was a truly Disneyland version of a castle, with bright colors and exaggerated features … inventive and delightful in every way.

Located in the Sintra hills, the Park and Palace of Pena are the fruit of King Ferdinand II’s creative genius and the greatest expression of 19th-century romanticism in Portugal, denoting clear influences from the Manueline and Moorish styles of architecture. 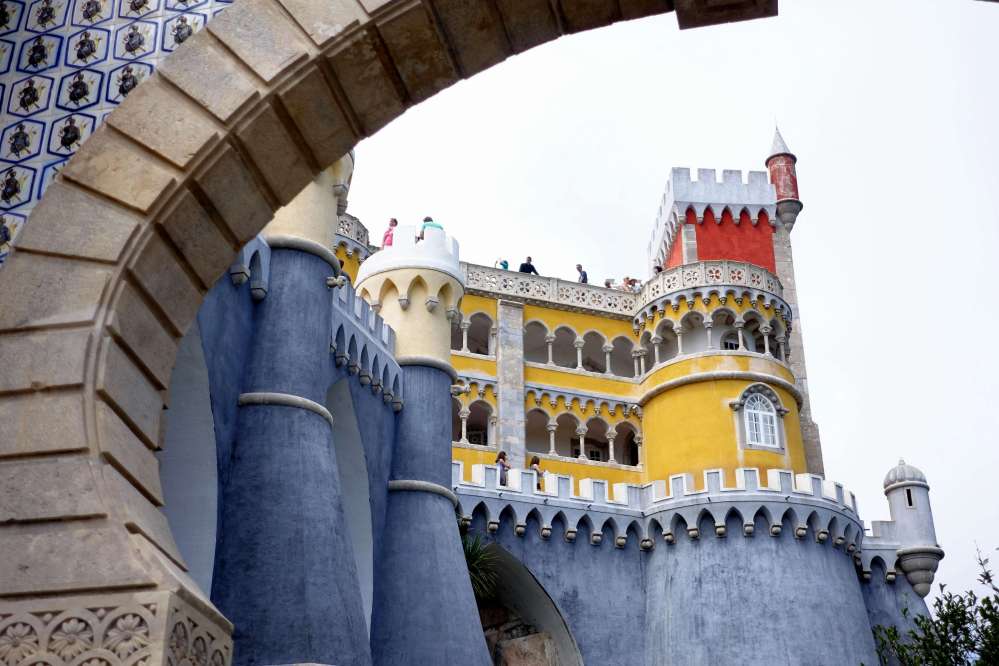 The interior of the palace, being restored to reflect the decor of 1910, when the Portuguese nobility fled to Brazil to escape the revolution, was not so delightful when we encountered the crowds, which were so oppressive that we finally exited the tour. What’s more, the few rooms we saw were not as enchanting as the exterior.

We spent some more time visiting the castle grounds.

We were able to walk around one of the towers, which offered amazing vistas of Sintra and its palaces and castles. 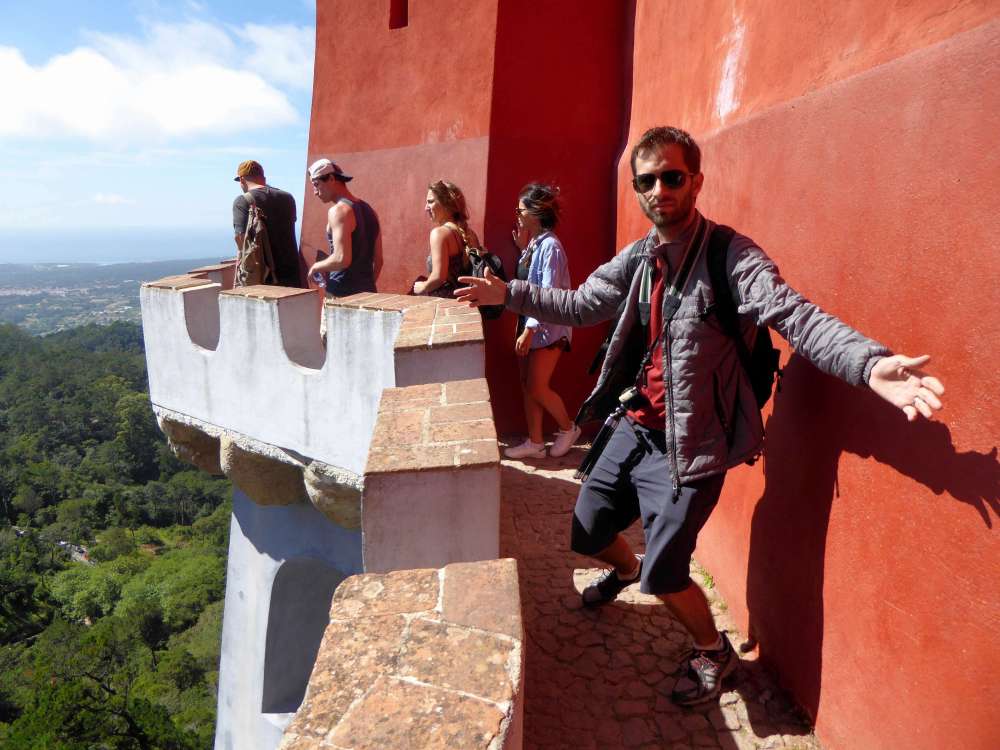 We explored some more of the palace ramparts, then headed down to the adjacent mountain top that had the Moorish castle ruins.

This is when we discovered that there was a very well maintained, rock-paved trail back to the town (our driver, wanting our return business, had told us the only way to walk down was on the narrow road with the buses and cars), so we went to the entrance to the castle, took some photos and, overruling Eitan’s FOMO, chose to not hike around the castle ruins themselves and instead walk back to town.

The walk was along the first and second defensive walls.

The walk down was delightful (Dan’s problematic knee kept hanging in there, though it was marginal at times) and this all worked out extremely well. 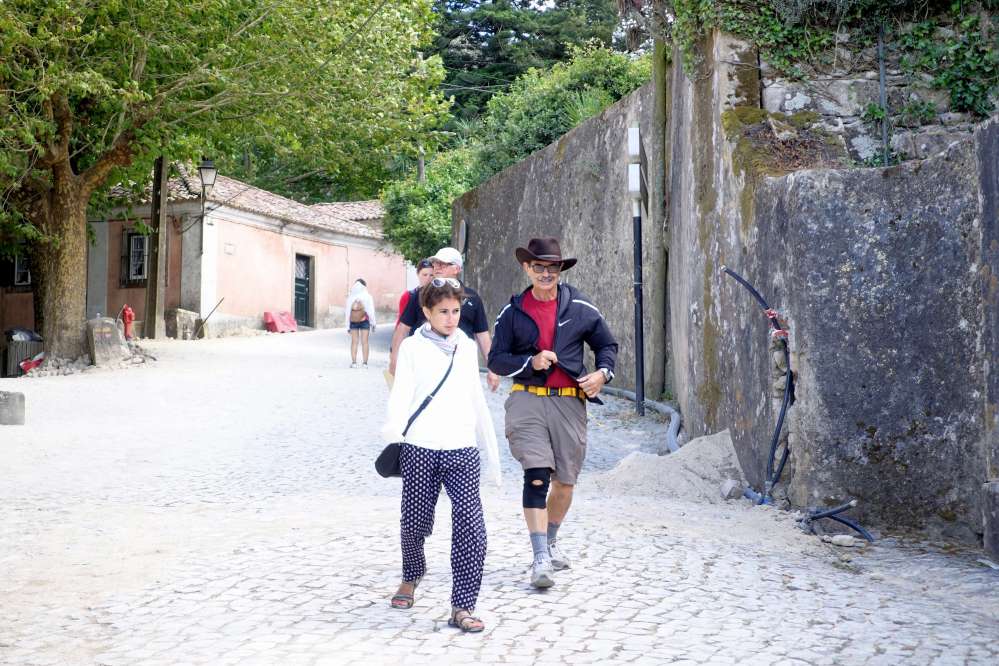 We went to a snacky restaurant for gazpacho, potato skins, a cheese plate and wine. This was especially pleasant, with some very good conversation about travel and eating and life. 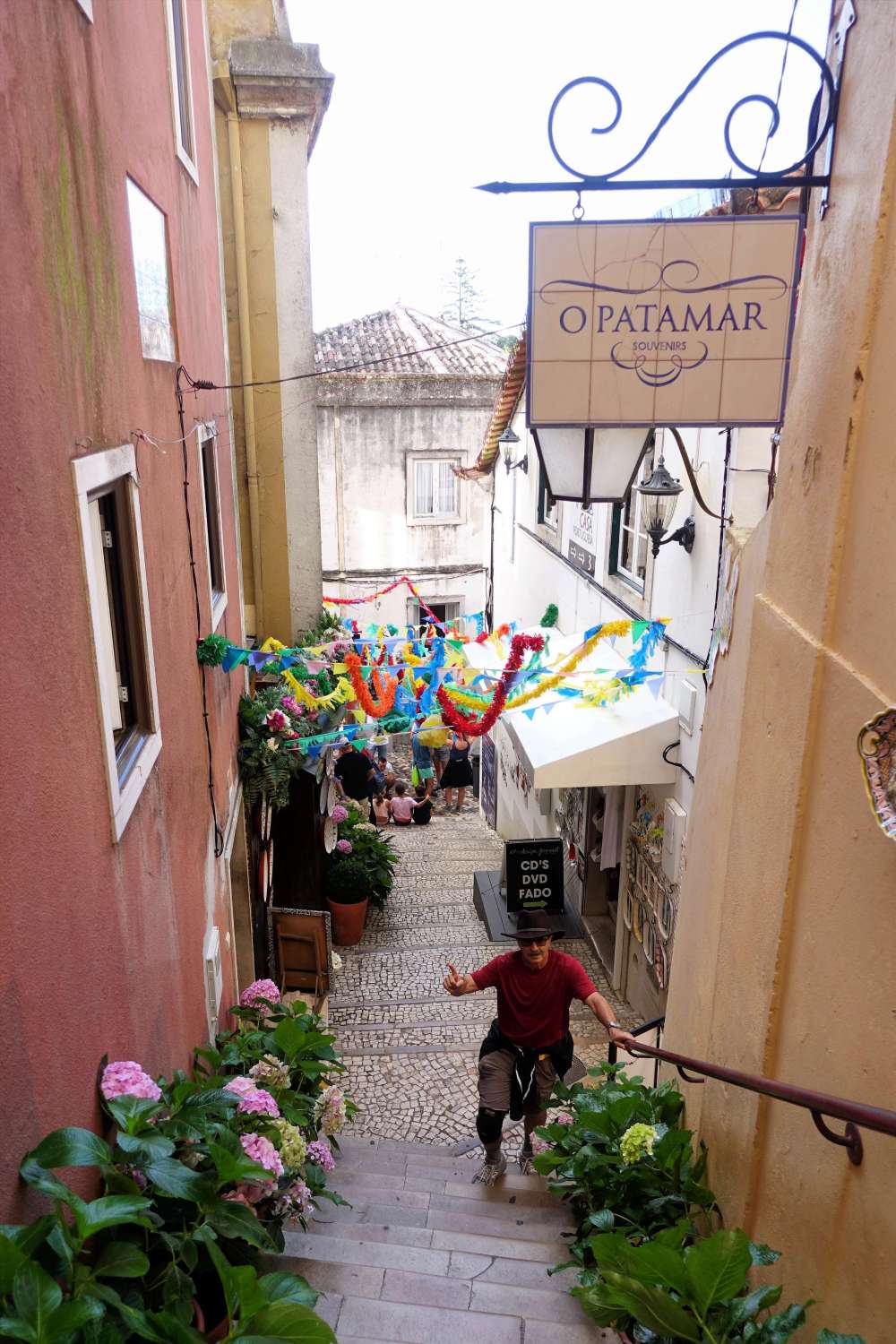 There was some shopping and walking around the cute town.

We walked back to the car to start our drive back to Lisbon for the night. 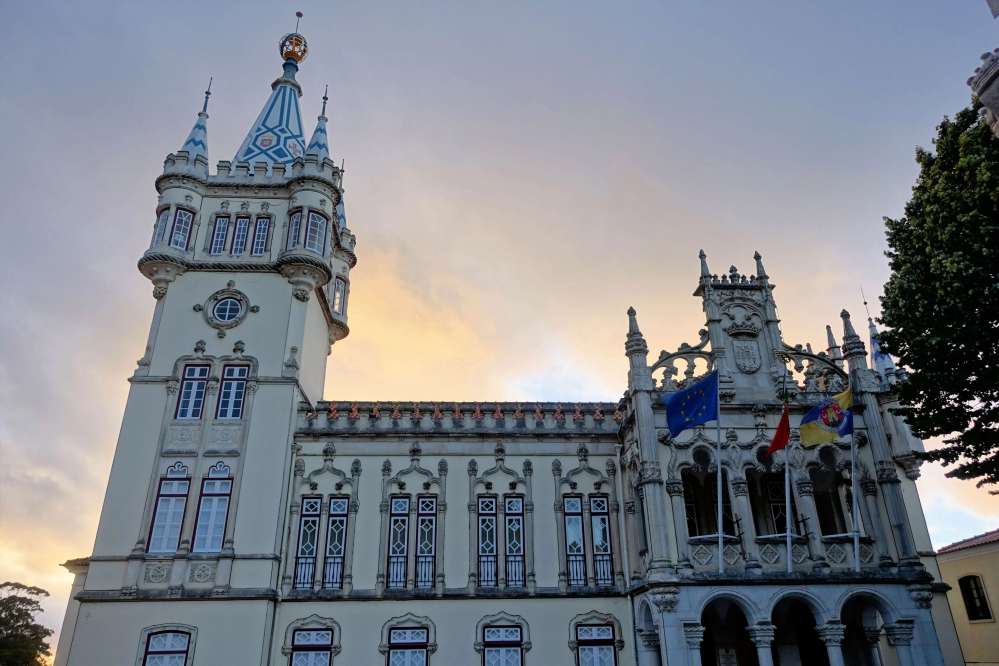