We took a short train from Trieste to Mestre and walked to our hostel for the night. We decided to stay in Mestre as the hotels in Venice are ridiculously expensive. We both have been to Venice and we were super tired, and almost stayed back at the hostel to relax. But luckily we chose to go out for a few hours to get some food and enjoy this beautiful city as it would have been very silly of us to not explore this remarkable city.

Venice is the epitome of a city plagued by tourism. But this is all for a reason, this place is charming, interesting and puts to shame all the other Venetian Empire cities we have previously visited.

There is a build your own Magnum popsicle right at the entrance of the city. They charged you like 7 euros for it so we just watched like hungry dogs.

We went straight to eat lunch, Dan and Elly gifted us a nice meal that we have been postponing already for a few weeks since kept on waiting to have cuisine worthy of this generous treat. We found a nice hidden restaurant where we got a bottle of wine and some steak and seafood! 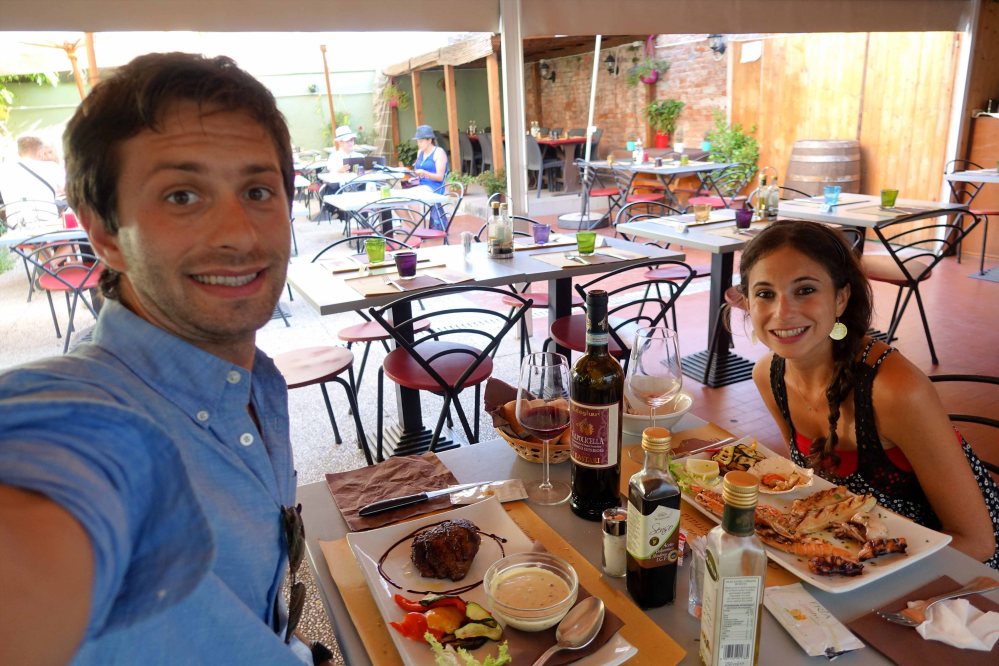 Venice is situated across a group of 117 small islands that are separated by canals and linked by 400 bridges. These are located in the shallow Venetian Lagoon, an enclosed bay that lies between the mouths of the Po and the Piave Rivers.

The name is derived from the ancient Veneti people who inhabited the region by the 10th century BC.  The city was historically the capital of the Republic of Venice.

The structure of Venice was created out of necessity. The population had to escape a barbarian invasion. The city’s unique landscape would make it harder for invaders to infiltrate.

The Carnival of Venice is an annual festival that ends with the Christian celebration of Lent, forty days before Easter. The festival is world famous for its elaborate masks and there are hundreds of shops that sell them for a hefty price.

The tourist map suggests you walk the main circuit from the main street. We decided to go the off beaten path, several times we hit a dead end, but we had the streets for just ourselves.

The city was not actually built on the islets. Instead, its structures are supported by a series of wooden platforms. These platforms are secured by additional structures placed in the sea. Why did the Venetians do this? The lands themselves were not strong enough to support a regular building.

Venice is famous for its Gondolas! For centuries, the gondola was the chief means of transportation and most common watercraft within Venice. In modern times, there are only 350 registered and they just carry tourists around for 130 euros for 30 min…. tourist trap alert!!

It was getting dark fast so we went straight to the San Marcos Square. This incredible piazza is where the St. Mark’s basilica and the clock tower are located.

With its Byzantine domes and 8500 sq metres of luminous mosaics, Venice’s basilica is an unforgettable sight. It dates to the 9th century when, according to legend, two merchants smuggled the corpse of St Mark out of Egypt in a barrel of pork fat. When the original burnt down in 932 Venice rebuilt the basilica in its own cosmopolitan image, with Byzantine domes, a Greek cross layout and walls clad in marbles from Syria, Egypt and Palestine. 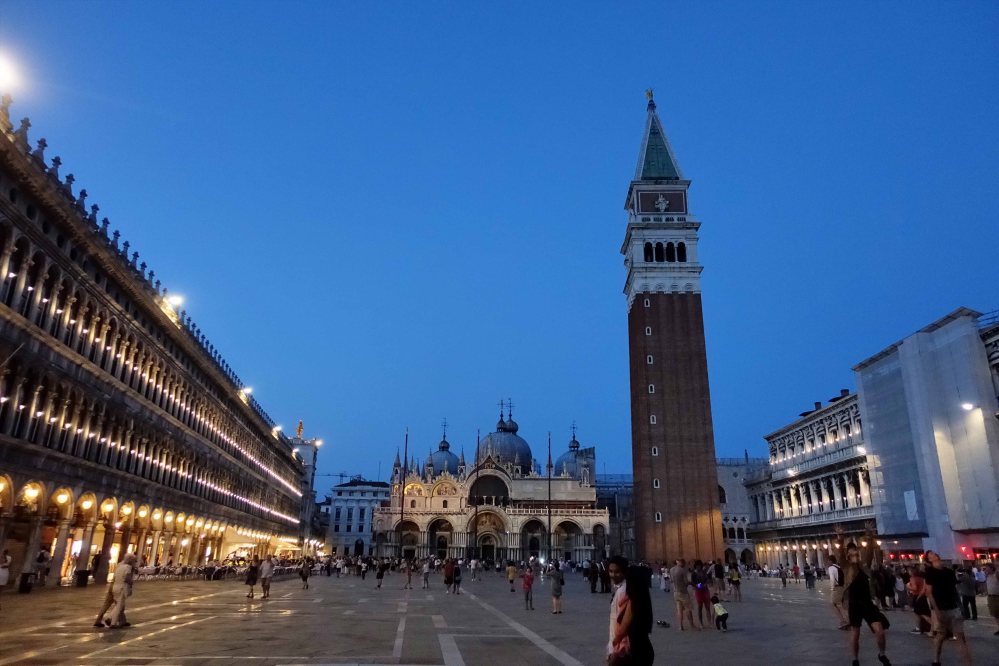 We walked back to the bus station to go back to sleep as we had an early flight the next morning. Walking Venice streets at night is a whole different experience, most tourists are gone, stores are closed and there is some peaceful atmosphere not seen during the day.

This is how we say good bye to Venice, one last photo of the Grand Canal, one of Europe’s most majestic sights.  That night we had one of the worst night sleeps of the entire trip.  It was a bittersweet evening as this was our last city of the trip just us.  Sarah was quite emotional filled with mixed emotions of being excited to see Elly and Dan but sad that the trip was coming to an end.  There was no a/c in our hotel room and we literally were over heating.  We had to wake up very early the next day for our flight and were actually ready to go so we could get some fresh air.

Bonus Pic Of The Day: Venice is by now reliant on the trampling feet of 20 million visitors a year. Equally, many residents resent its status as a sort of Italian Disneyland. The high prices keep residents from enjoying their own land. This makes tourism both a blessing and a curse for Venice.There is a lot of graffiti around the city depicting the nasty side of tourism. We found this one, looks to me like an American tourist more interested in shopping than the culture of the city.