Today we took a fast boat to take us to the world famous Blue Cave! This natural wonder cave is a must see for every tourist visiting Croatia. The full day tour included many stops in several of the 1246 total islands in Croatia. But because all looked the same, there was a sense of Dejavoo for us throughout the day.

Our first stop was Pamizana in the Pakleni Islands. It is a very small island where the rich people go party privately. You need a boat to come here, so this filters out most tourists like us. We spent around an hour here while we waited for our captain to drop someone else in Hvar. 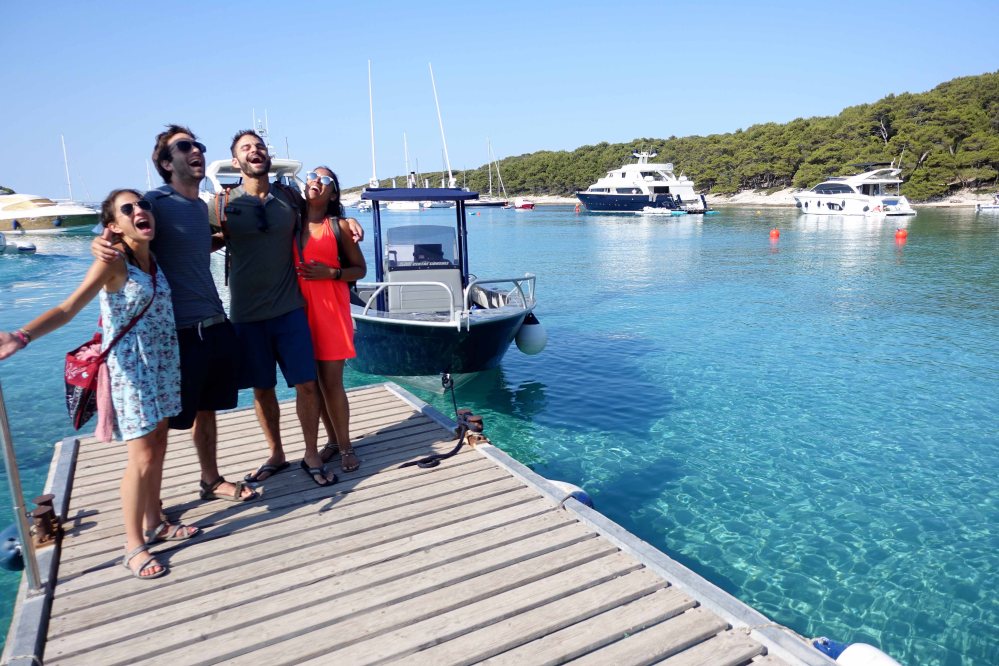 We were able to walk the whole width of the island in about 5 minutes. There is not much civilization here… it’s beautiful. 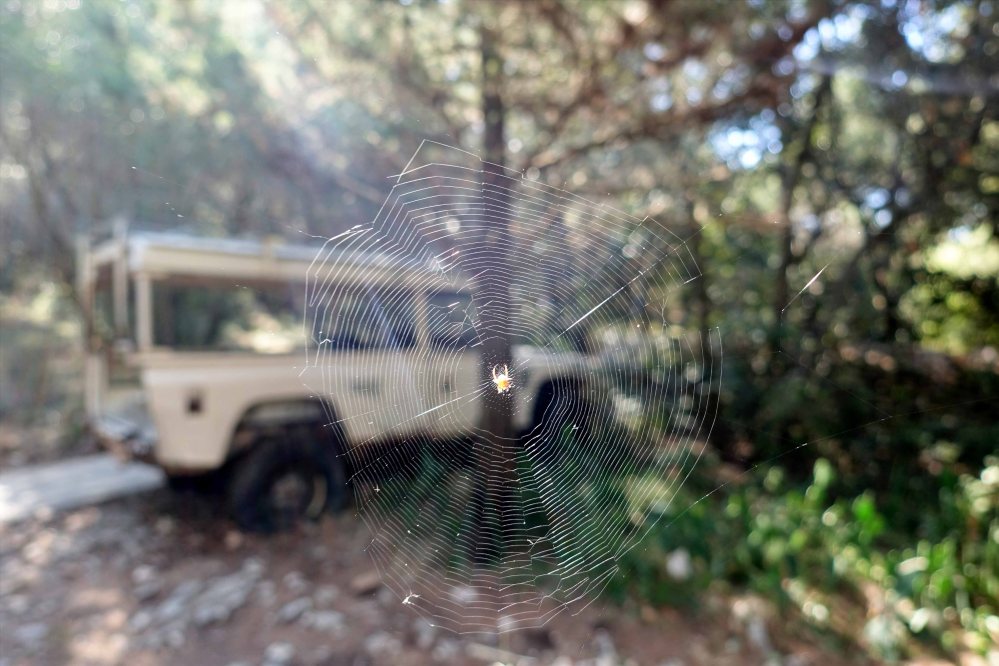 The island was completely dead, not even one soul was awake at the time we got there. 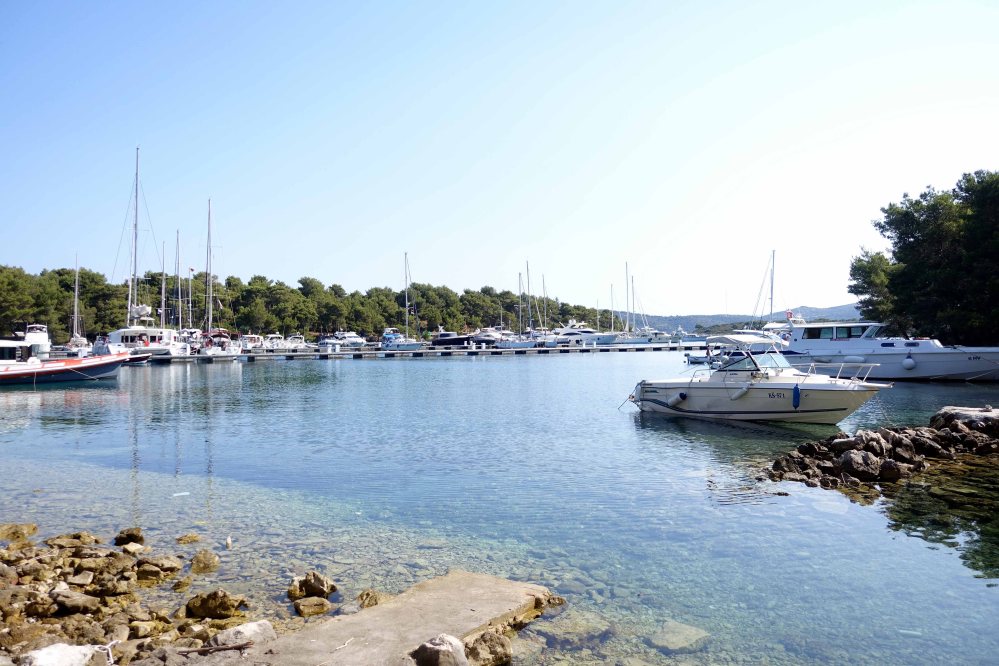 We got picked up by our captain and we headed to the green cave. It is a big sea cave with a hole on the top where the light shines, apparently spreading sparkling green light. To me it still looked blue, but probably they have a conflict of names so they chose green. 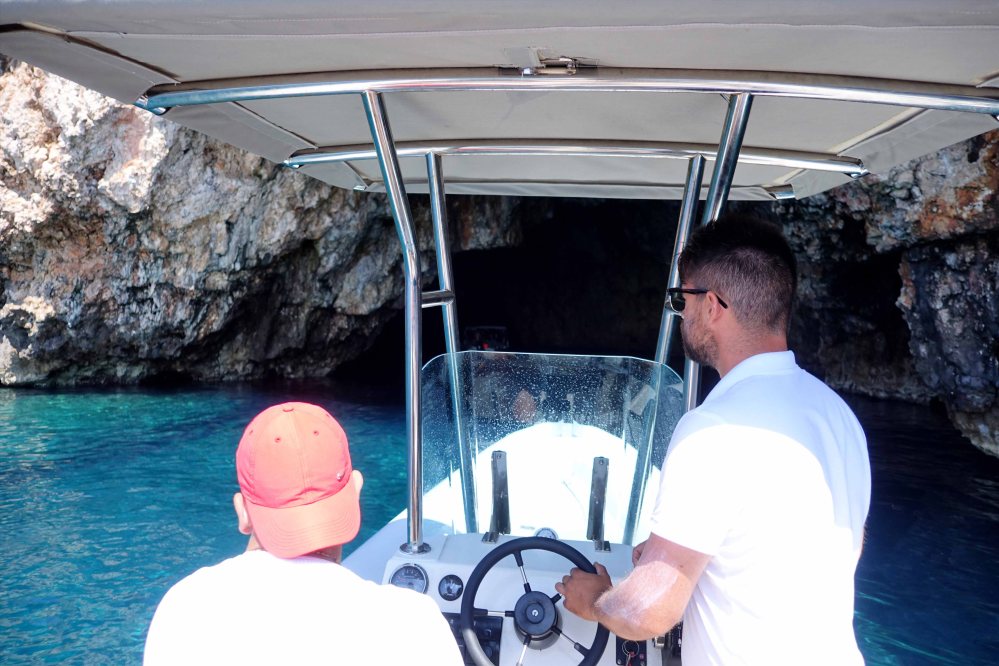 We were able to swim in this one for a few minutes. 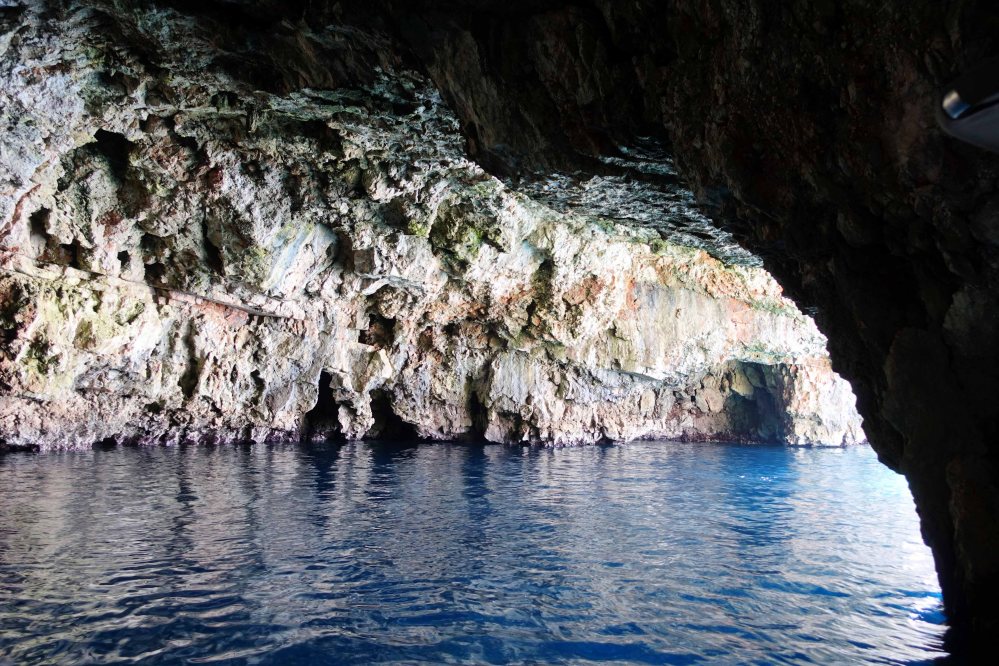 Our new friend Jacqueline from Australia joined us for the day! She is awesome! 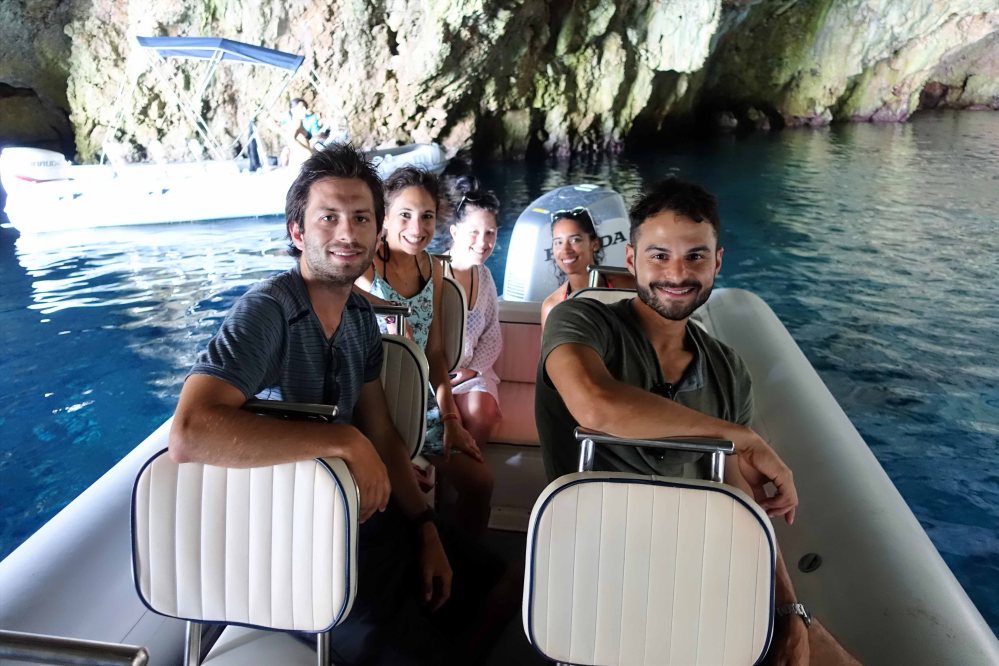 We visited other islands. Many of these were used by soldiers in WWII for hiding submarines, position artillery, and storing ammunition. You can sometimes spot man made holes that were made to allow some fresh air into the caves for the soldiers living in there. 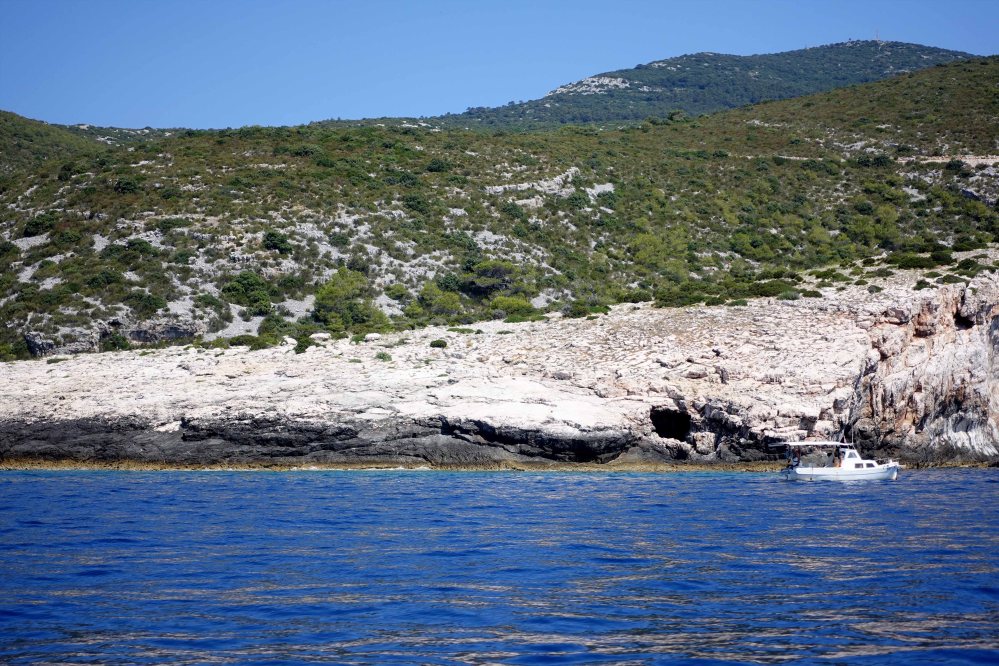 It was amazing to see the rock layers rising above the sea. 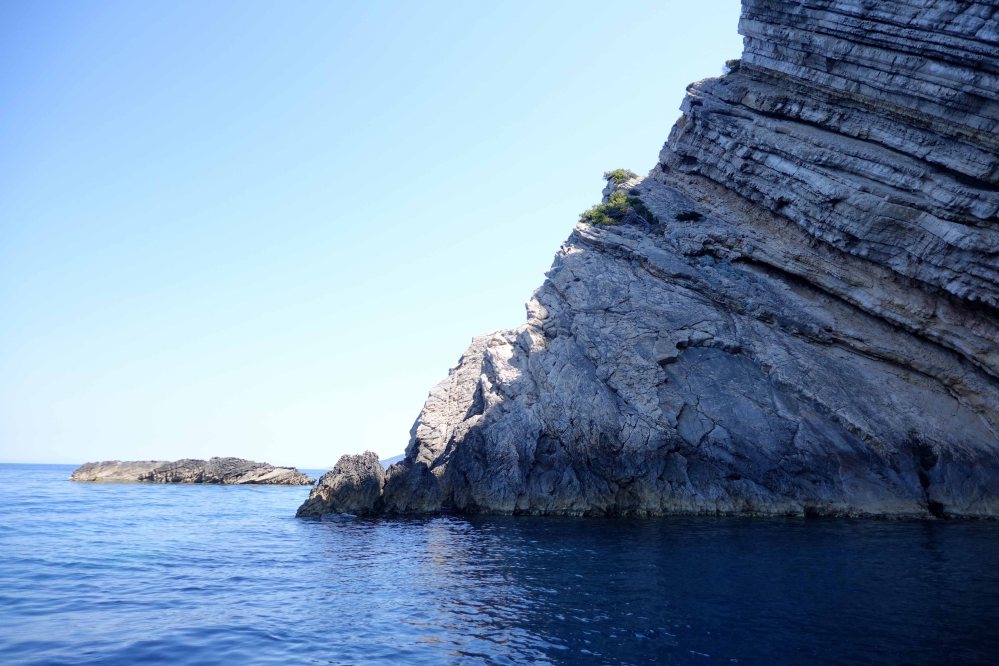 We did a quick stop to jump off the cliff! 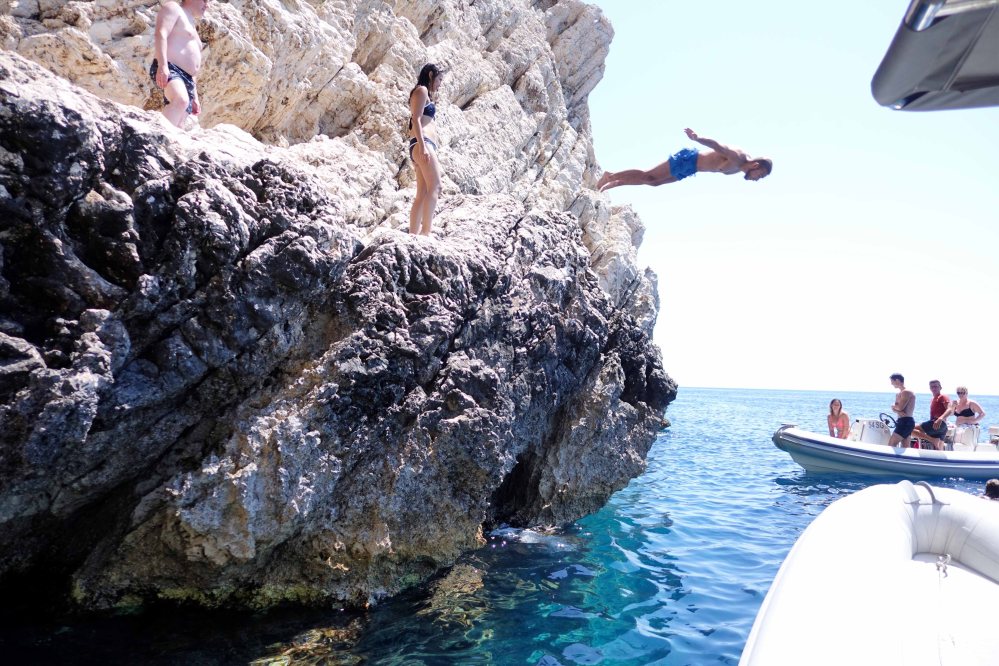 Jacqui and Tania have the gift of not feeling cold while swimming, they were truly enjoying the refreshing water. 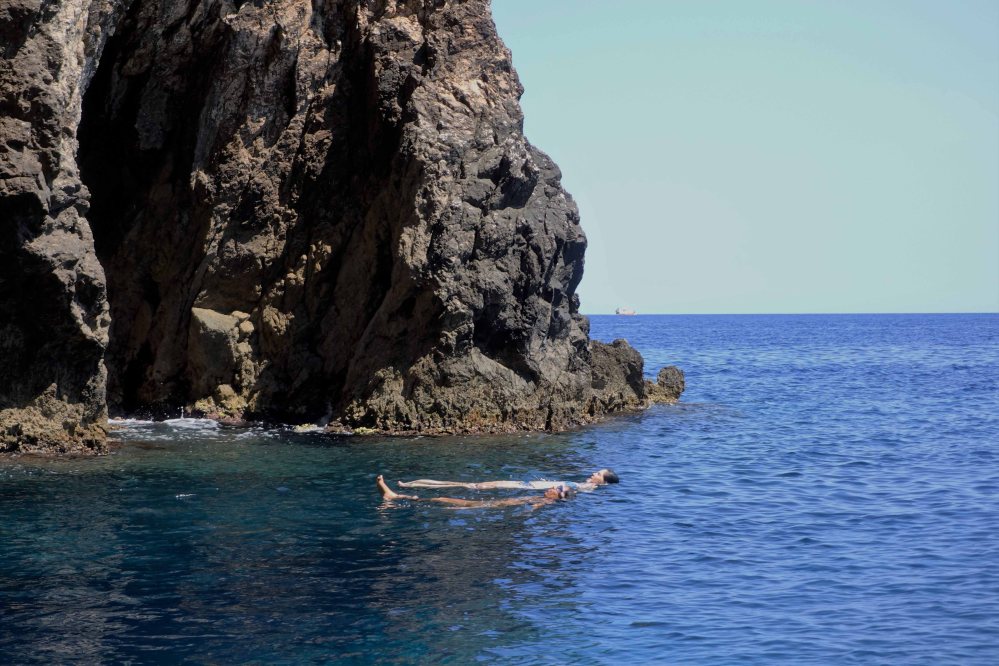 The next stop was to eat some lunch. There is a guy who made his own local restaurant in the middle of an unknown island, the menu is all seafood, so Eitan was less than happy about it. It was not really good honestly. 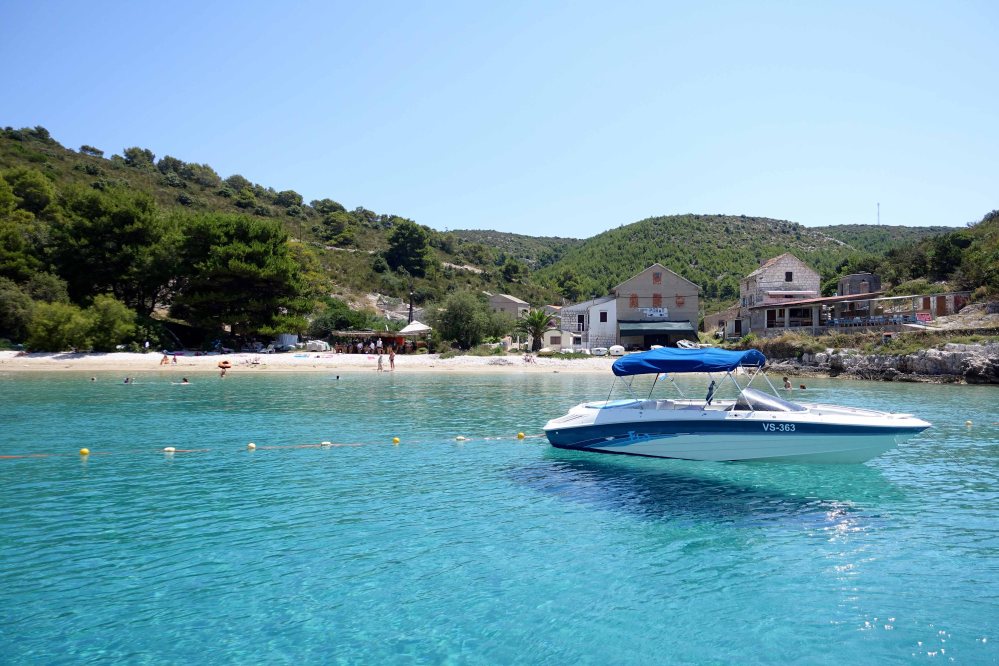 We finally arrived at the blue cave which is located at the island of Bisevo. The grotto is one of the best-known natural beauty spots on the Adriatic and a popular show cave because of the glowing blue light that appears at certain times of the day. You need to pay an extra ticket and wait in line for a smaller boat to take you in.

First described and painted by Baron Eugen von Ransonet, the cave was originally accessible only by diving as it had one natural entrance below the sea level. Based on his suggestion, an artificial entrance large enough for small boats was built in 1884. 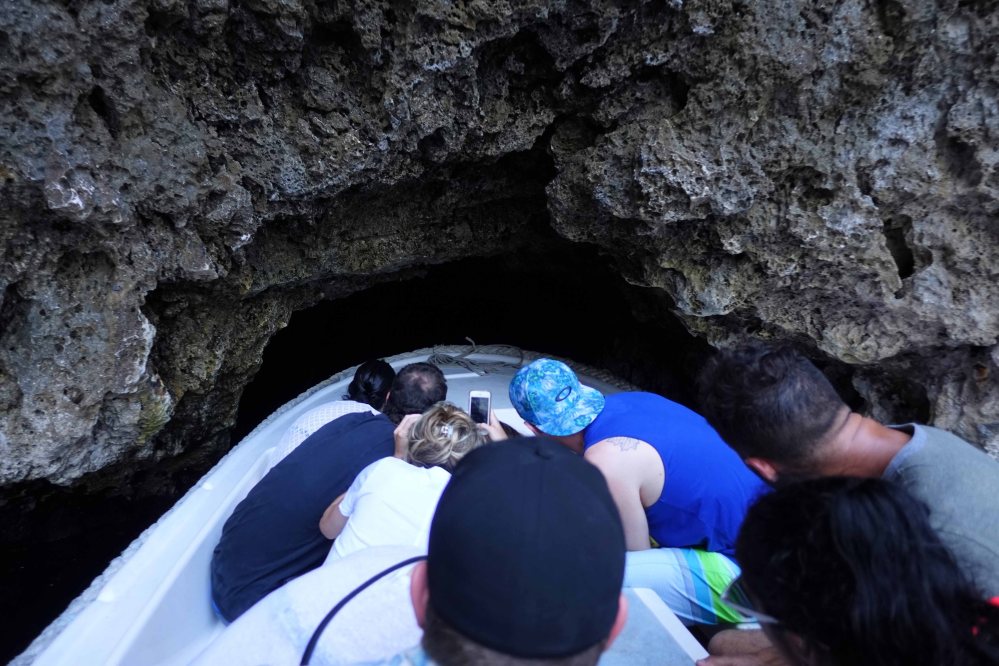 The maximum amount of time allowed in here is 15 minutes and no swimming is allowed. 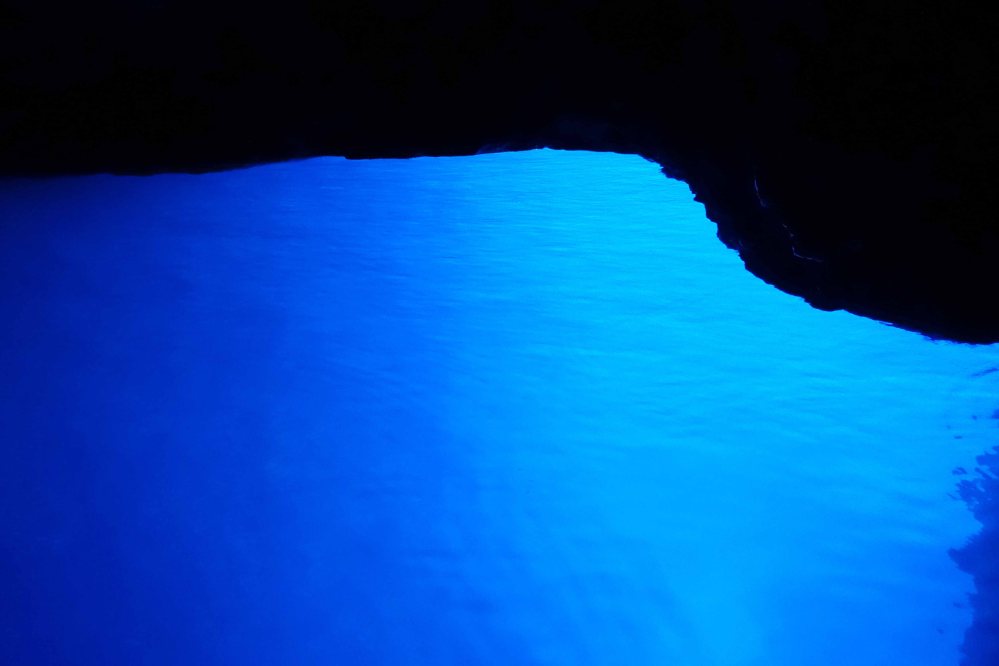 The cave is amazing, the color seen in these photos is exactly how you see it there. 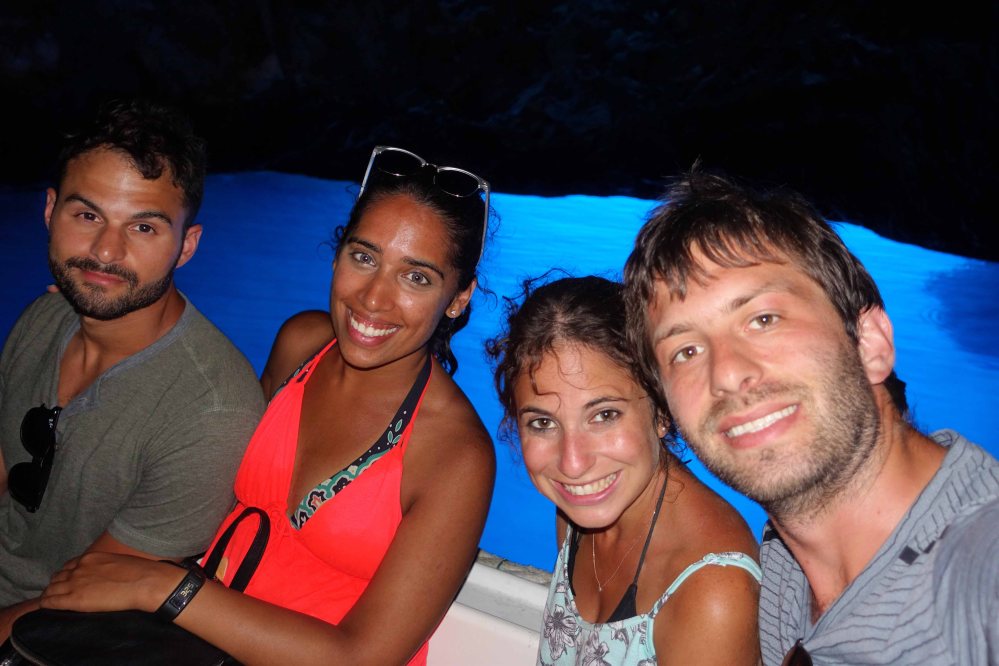 We made a quick ice cream stop in another island that looked exactly like all the others. 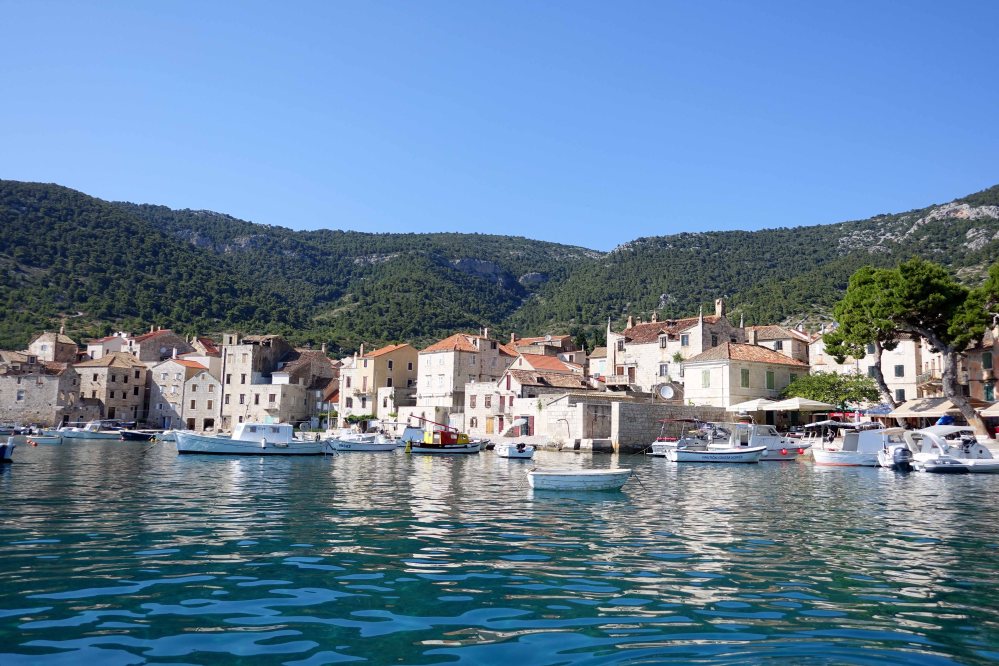 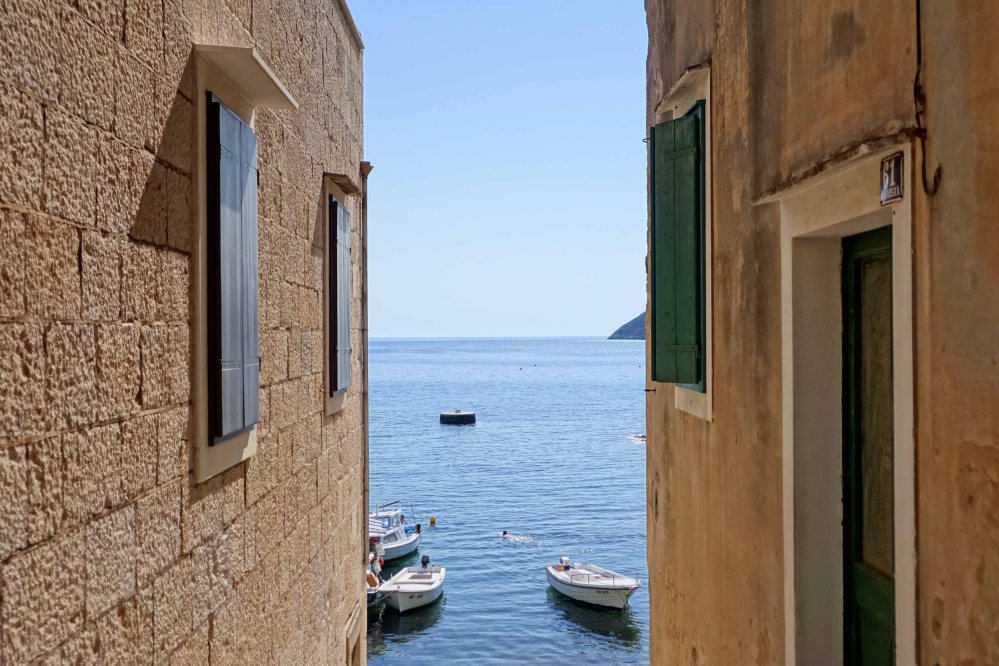 Stiniva cove on island Vis is one of those places that will make you feel so small in this world, it was voted the best beach in Europe (I have no clue why). It is believed that it was created many many years ago when one huge cave collapsed the walls, so now, thanks to that two huge cliffs that create the beach it feels like you are entering Roman amphitheater.  In order to get to the beach, everybody has to swim as boats cannot dock. 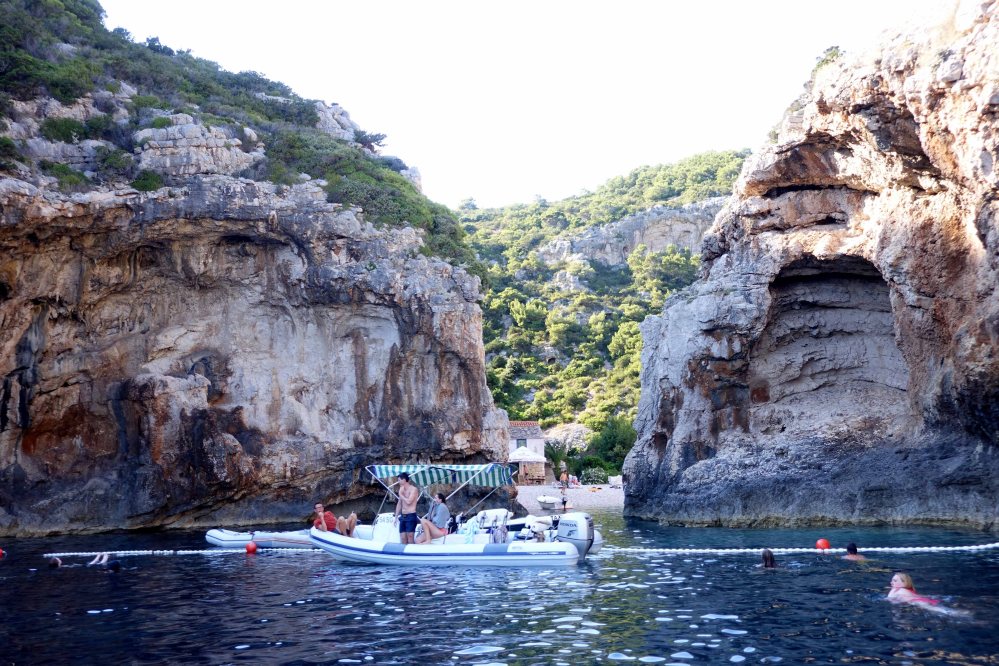 It is hard to see the beach, so I took a photo from google to show it: 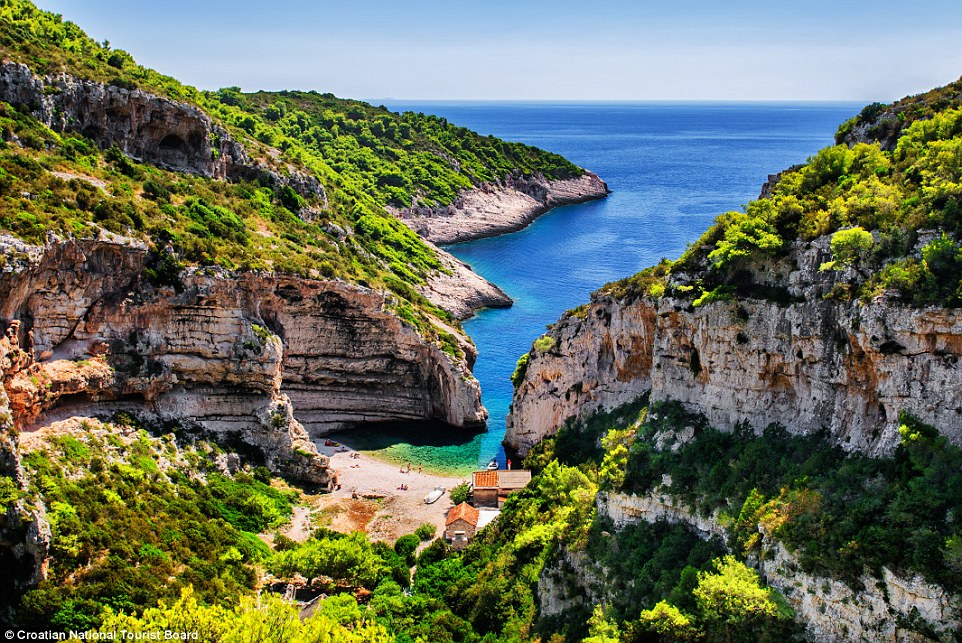 The last stop is probably the most popular one. Although many visitors think it’s overcrowded it is still a must-see destination. Town Hvar on the island Hvar is the historical core of the island. 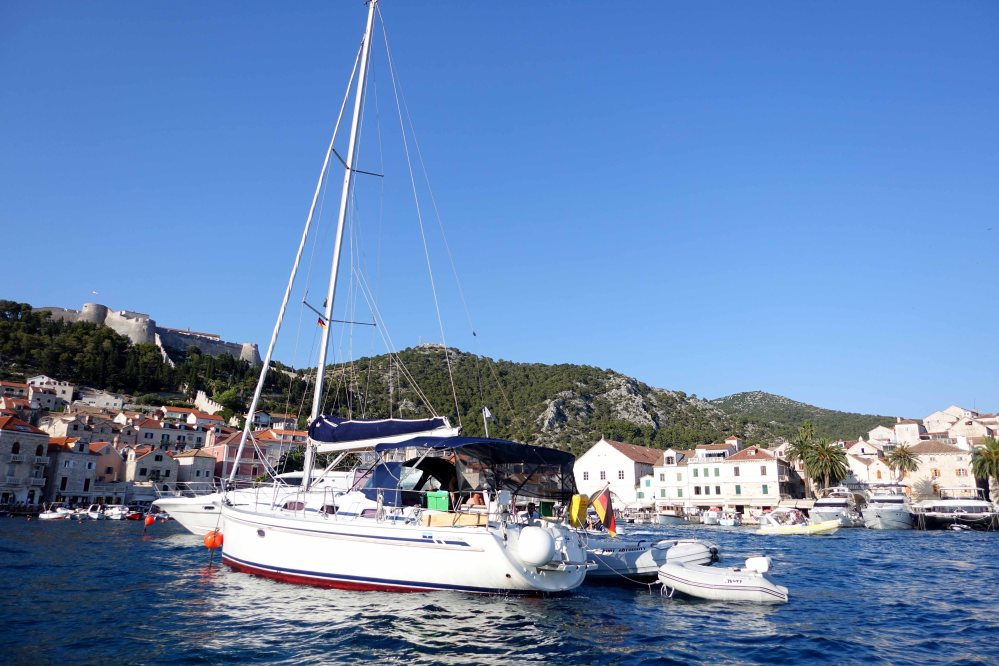 Hvar is the rich and famous Croatian playground. Everybody here is dressed more preppy and the vibe is more high end. Staying a night here is significantly more expensive than the rest of Croatia. 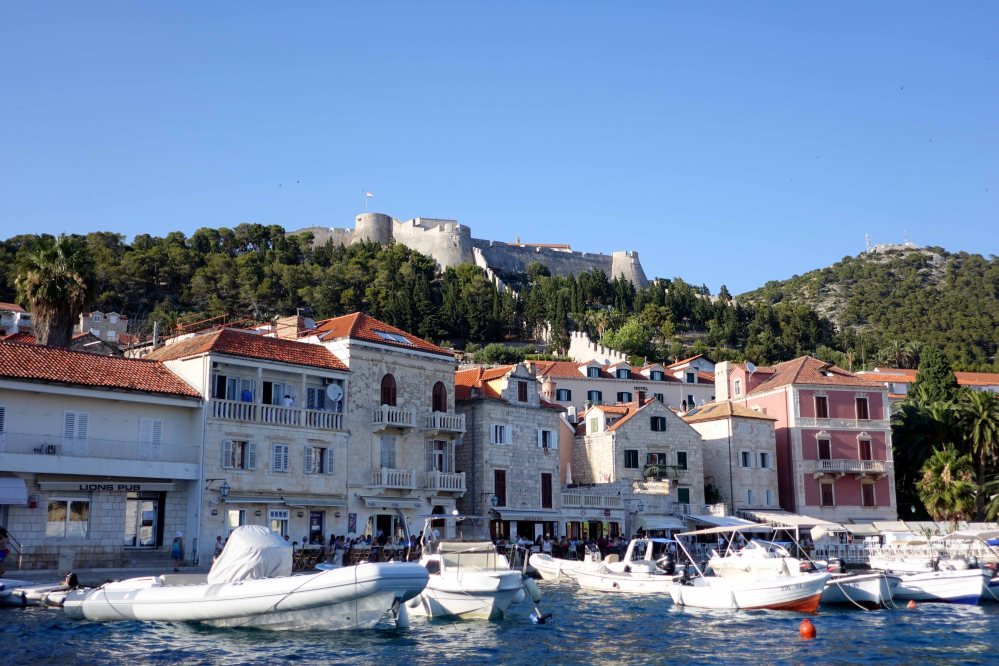 Hvar rose to importance within the Venetian Empire as a major naval base. Prosperity brought culture and the arts, with one of the first public theaters in Europe, nobles’ palaces, and many fine communal buildings. 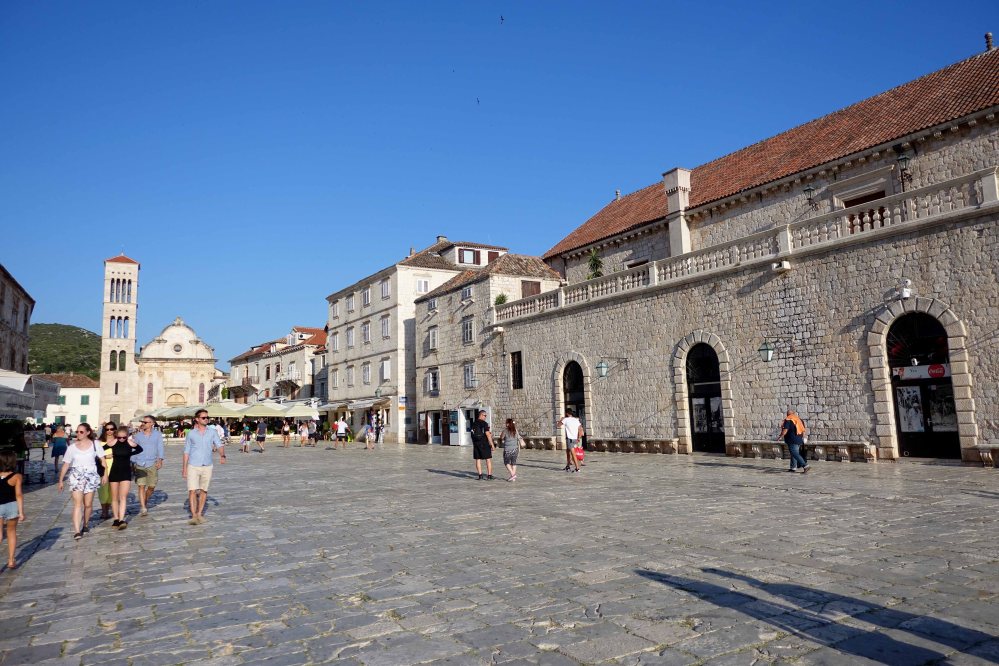 The most visited historical site in Hvar is Fortica, a fortress on the small hill above the town. If you climb up you can take the most beautiful panoramic photo of the Pakleni islands. We really didn’t have enough time to visit the fortress, so Nadeem and Eitan climb the hill while Sarah and Tania stayed on sea level to wine taste. 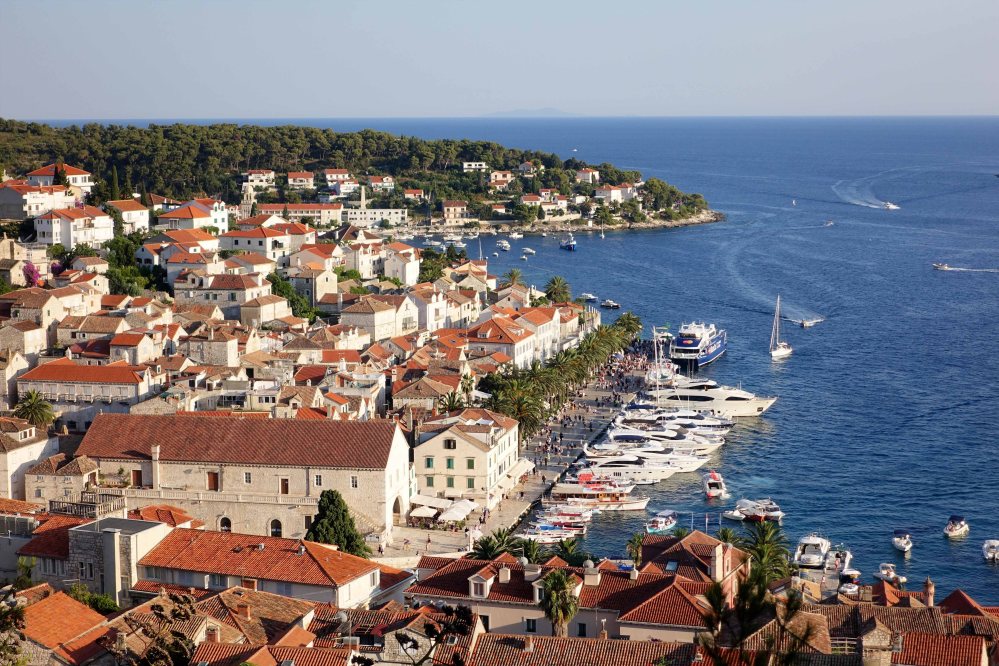 After a couple of hours, we went back to split. The boat ride back was stunning because there was a magnificant sunset.  That evening we were exhausted but met our new friend Jackie for dinner.  Afterwards Eitan experienced excessive FOMO because we were all tired but he still felt he hadn’t experienced the Split nightlife.  So after a bit of a FOMO melt down we went to bed.  I guess we will have to return to Split to satisfy the FOMO.  The next day we will be traveling north making our way towards Zagreb. 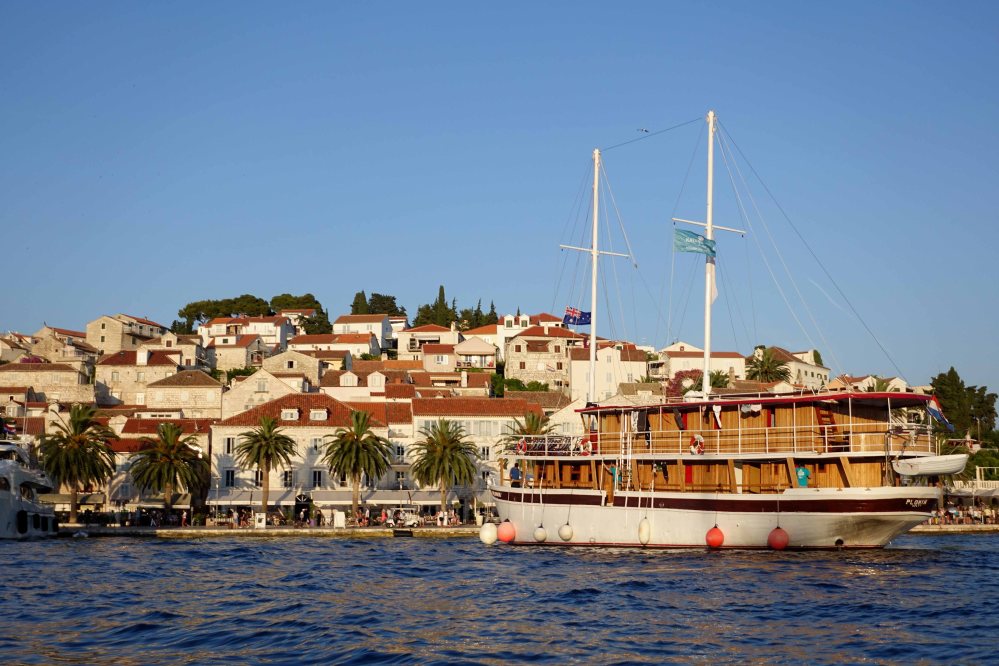 Bonus Pic of The Day: We found this graffiti while walking the streets in Croatia. Some hippies (mostly Serbian) think that NATO (North Atlantic Treaty Organization) is a terrorist organization, as it helped Croatia and Bosnia defend against the Yugoslavian Army. I guess there are always two sides of the story. 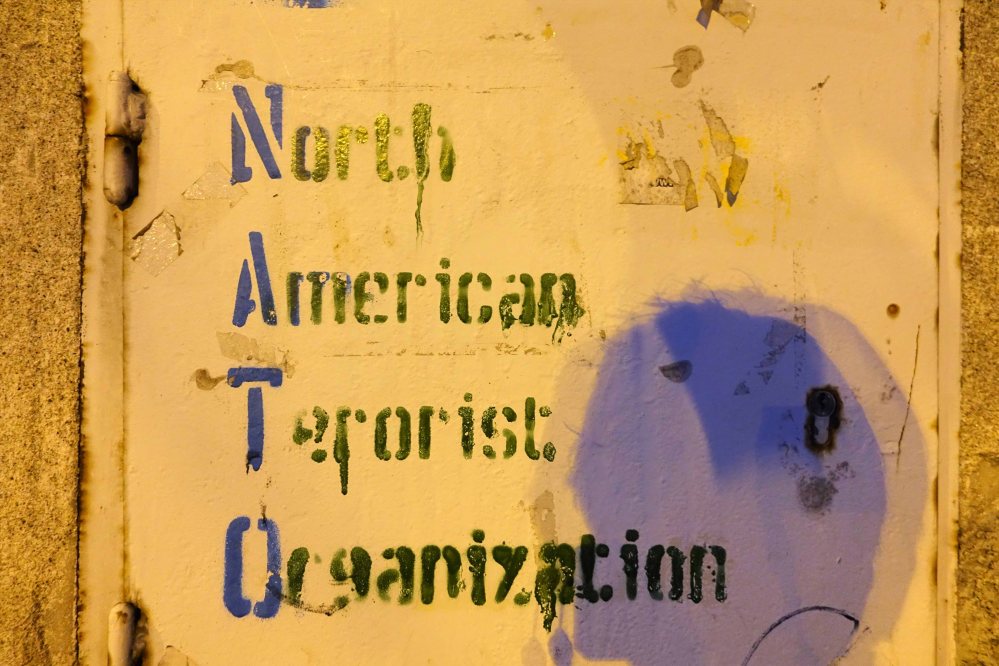