2:00 am and Eitan woke up to an earthquake, he made a huge mistake and immediately woke up Sarah; she is so afraid of earthquakes she started to panic given we were in Nepal and the buildings here are not built with the same standards as the U.S; You could here tourists running down the stairs for safety and luckily the building didn’t collapse and we can keep traveling!! yeeey!

Our first stop of the day was the Boudhanath Pagoda on the outskirts of Kathmandu. This ancient Stupa is one of the largest in the world. The influx of large populations of refugees from Tibet has seen the construction of over 50 Tibetan Gompas (Monasteries) around Boudhanath. As of 1979, Boudhanath is a UNESCO World Heritage Site. Along with Swayambhunath, it is one of the most popular tourist sites in the Kathmandu area. The pagoda’s top spire fell during the earthquake and it is being renovated as we speak. You really can’t go anywhere in Kathmandu without seeing some earthquake damage. Tibetan merchants have rested and offered prayers here for many centuries. When refugees entered Nepal from Tibet in the 1950s, many decided to live around Boudhanath. The Stupa is said to entomb the remains of Kassapa Buddha.

We found a nice explanation of the meaning of the different parts of a Stupa: You are supposed to walk around it clock wise while spinning the prayer cylinders for good luck and karma gathering. According to Chaitya Pradakchina Gatha, all devas and dragons, yakshas and ghosts will come close to you and make offerings to you, and they will not harm you intentionally. Many other benefits of circumnavigating the stupa is mentioned in the sutra.

Around the pagoda it is full of cute Tibetan souvenir shops. Esecially a lot of Buddhist stores that sell praying artifacts. They sell a lot of traditional mandala paintings which have so much beautiful detail and we couldn’t help the urge to buy some of these. We were shown how they paint them, and it takes them around a month to finish one of these. The prices range from $10 to $4000 depending on size and if the artist is a master or a student. Most of these paintings are used for meditation as if you look in the white dot in the middle it feels you are being hypnotized.

Of course we ended up buying one and Courtney did too. We plan to buy a really cool one that will help us meditate while we poo, as it will be hung in our bathroom just across the throne.

We walked trough local neighborhoods to our next next stop, the Shree Pashupatinath Temple, basically a mini version of Varanasi cremation temple. 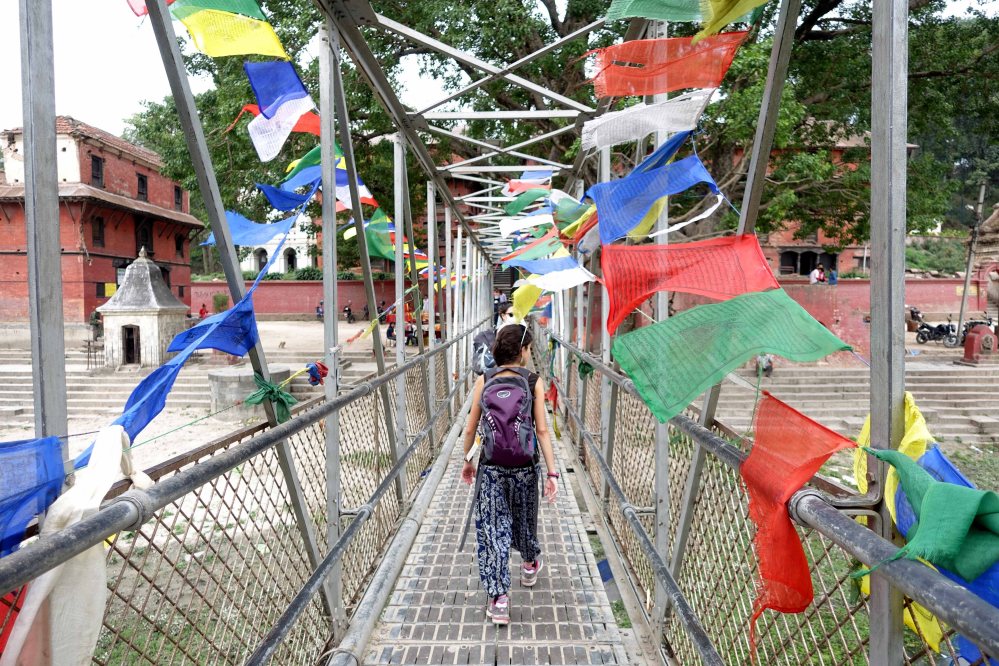 The entrance fee was a steep $10 and we have already been at the better one in Varansi, so we skipped it. Also, here in Nepal we have noticed that the temples don’t let you in unless you are Hindu (first time we have seen this in Asia, most other countries are very welcoming of visitors to their temples as long as you respect their customs), so that was another reason not to go in. 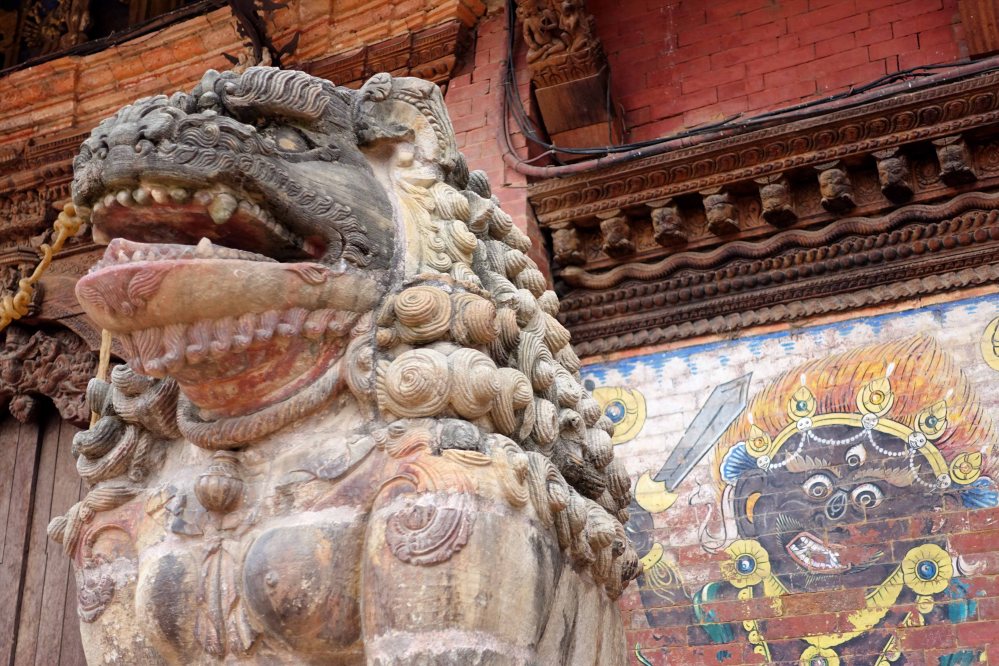 We stopped for lunch in one of the rooftop bars overlooking the beautiful square, there are restaurants that are worth to pay the premium just for the view. We tried Everest beer! The beer was definitely cold! You get it? Sorry, bad joke. 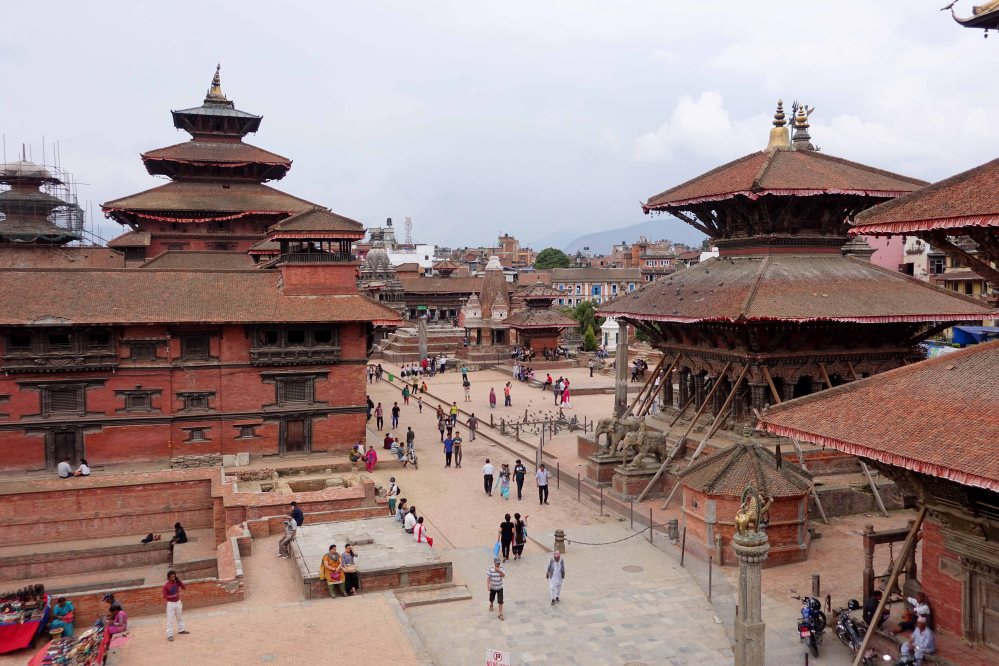 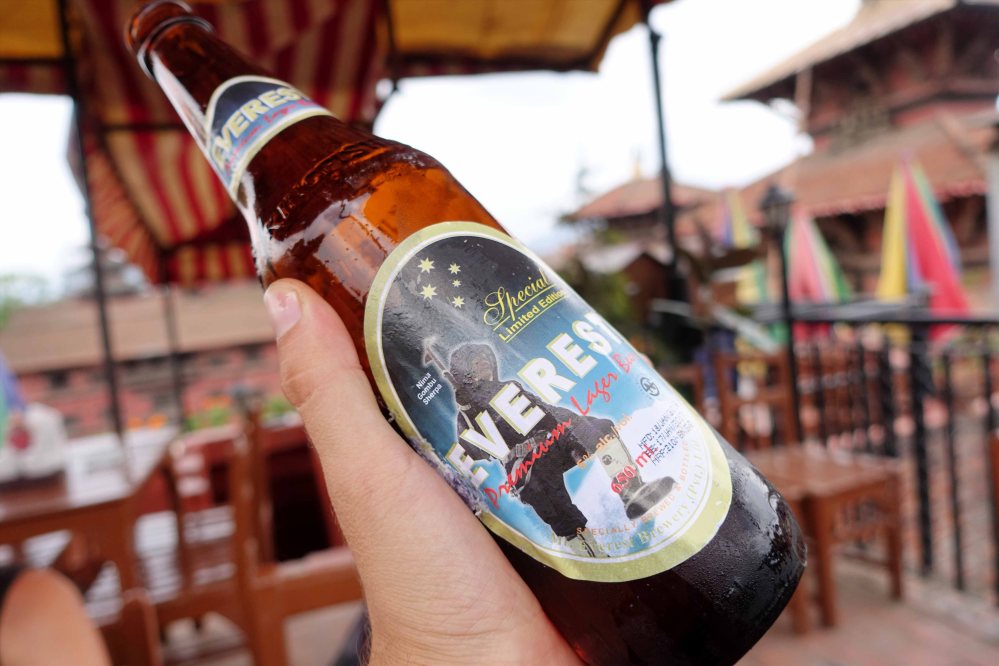 We had enough sightseeing and the altitude in Kathmandu was taking a toll on our energy, so we decided to go back to the hotel to drink our wine on the rooftop of our nice hotel that we purchased at the Delhi duty free, one of the wines was spoiled! Aaaaaahhhhh India’s last farewell gift to us!!

Bonus Pic Of The Day: If you aren’t like Eitan who is a flag expert and has the ability to recognize almost every flag, then this will be inspirational to you… Nepal has probably the most unique shaped flag of the world and is easy to recognize. It is the world’s only non-quadrilateral national flag!! Red is the sign of victory in war. The blue border is the color of peace. Until 1962, the flag’s emblems, the sun and the crescent moon, had human faces. They were removed to modernize the flag. 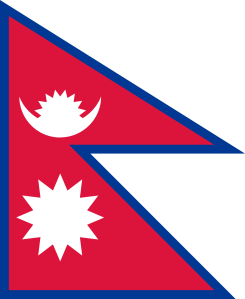