Today we woke up at 3am for our early flight to Kathmandu.  The day we were expecting finally arrived and we officially survived India!  We even got to squeeze in an early morning lounge breakfast before our flight.  The airport in Kathmandu felt calm and old.  We had heard it would be a complicated process with the visa but it was quite efficient and our hotel driver was waiting for us.  We already could tell that people will be friendlier here even in our brief interactions at the airport, people smile here.  We arrived at our hotel very tired and grateful they let us do an early check in.  Our room on the other hand was not so great and we were very happy that we only have one night in this room. There was no electricity at that time, there is no electricity in Kathmandu from 10 am to 6 pm. Some hotels have a generator to provide basic electricity for charging electronic devices and such, but you will not have lights or a hot shower during those times.  The sheets were dirty and there wasn’t warm water but honestly we didn’t mind that much because this city is awesome! Eitan almost died as the curtain holder fell about 2 inches from his head while he was closing the curtains.

After a quick nap we began to explore and continued to realize throughout the day that even the cities we liked in India do not compare to here. It’s filled with awesome souvenir shops, cute restaurants and lots if hippies that love to hike. It feels touristy but in a very charming way (not like Thailand).  We went to one of the best reviewed restaurants here which was actually a pretty comical site. It’s literally filled with hippy backpackers sitting on the floor eating vegan food and using their Iphones; you can hear people asking if they have soy milk and such things, I guess they still haven’t realized they are not in L.A. 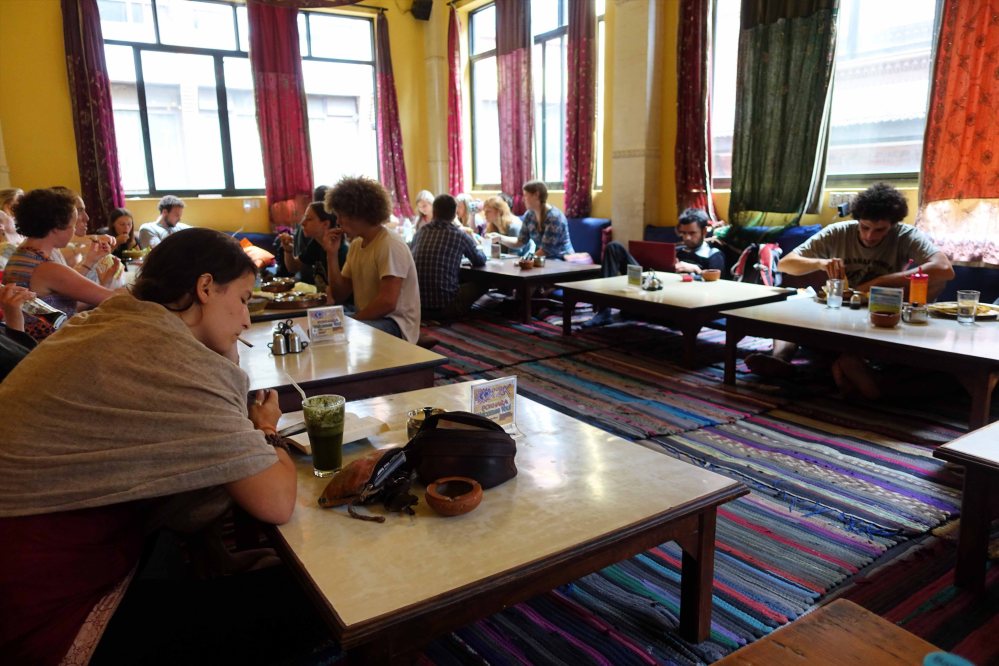 As a result we loved this place because it was great for people watching and we had some pretty decent Israeli food.  We even ate salad, first time since Thailand but we figured a place with 1200 reviews and only tourists eating there must be safe (and we were totally fine).

We walked around the area called Thamel, this is where all the budget hotels are located. This area is full of hiking gear stores, mostly selling fake North Face and Mammot jackets. On first sight they look absolutely real, but when you put them on they sometimes do not fit right and you can see other defects. A fake North Face jacket goes for around $20, compared to $350 in the States for a real one, so we each  bought one that actually fit right!

Of course Sarah AKA “Souvenir Magnet” purchased a couple things like this traditional nice bags!

Eitan was interested in the Gurkah knife shops. “Better to die than be a coward” is the motto of the world-famous Nepalese Gurkha soldiers who are an integral part of the British, Nepali and Indian Armies. They still carry into battle their traditional weapon – an 18-inch long curved knife known as the Kukri. These guys are known for their bravery because of a few Rambo stories out there that you should read about if you are interested in this type of stuff. 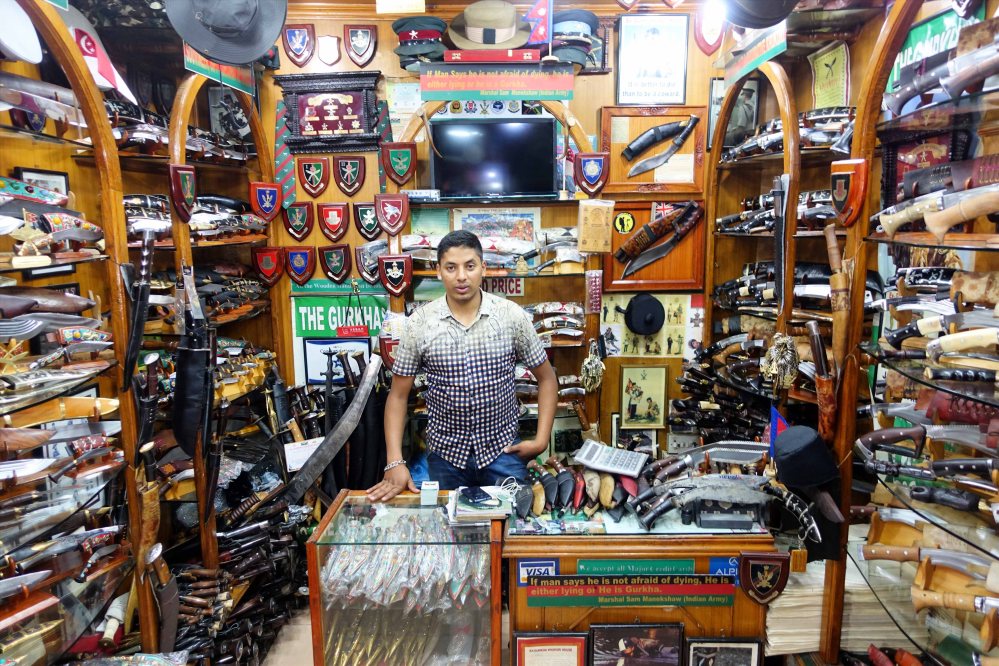 We ended our fun first evening with a ginger lemon tea, a glass of Nepalese wine, and a hookah while we people watch all the hippies walk by… We love Kathmandu.

The next morning we met our visa guy that will help us process the very complicated Tibet visa. After an hour of filling out paperwork and trusting our passport to some random guy, we got to meet up with Courtney, Sarah’s friend from California that will be joining us in Tibet and for the rest of Kathmandu!  It was a very neat moment seeing Courtney as we haven’t seen a familiar face in 3 months and also quite bizarre to see a close friend from home in Nepal of all places!

Prior to Courtney arriving we ate our first authentic Nepali food which looked very similar to Indian food. We ordered a Thali of different dishes but it was not that good. I think we need a change from this type of food for a while.

We transferred hotels and we were so happy with our new room. It was 3 times more expensive but we will actually sleep well here! We met Courtney and we were off to visit the famous Durbar Square in Kathmandu.

Durbar Square is the generic name used to describe plazas and areas opposite the old royal palaces in Nepal. It consists of temples, idols, open courts, water fountains and more.

Before the Unification of Nepal, Nepal consisted of small kingdoms, and Durbar Squares are most prominent remnants of those old kingdoms in Nepal. In particular, three Durbar Squares in the Kathmandu Valley, belonging to the three Newar kingdoms situated there before unification, are most famous: Kathmandu Durbar Square, Patan Durbar Square, and Bhaktapur Durbar Square. All three are UNESCO World Heritage Sites and we will be visiting them all in the next couple of days, so stay tuned.

This plaza was beautiful (it still is), but the earthquake in 2015 did A LOT of damage to the monuments here. The damage is very apparent and basically all buildings were damaged one way or another, many completely collapsed and all you can see are the bases where they used to stand. It is truly a sad image when you see it, reconstruction efforts are still ongoing but will take at least several years to complete. I truly hope the steep entrance fee they charge will be used to reconstruct all these beautiful monuments. 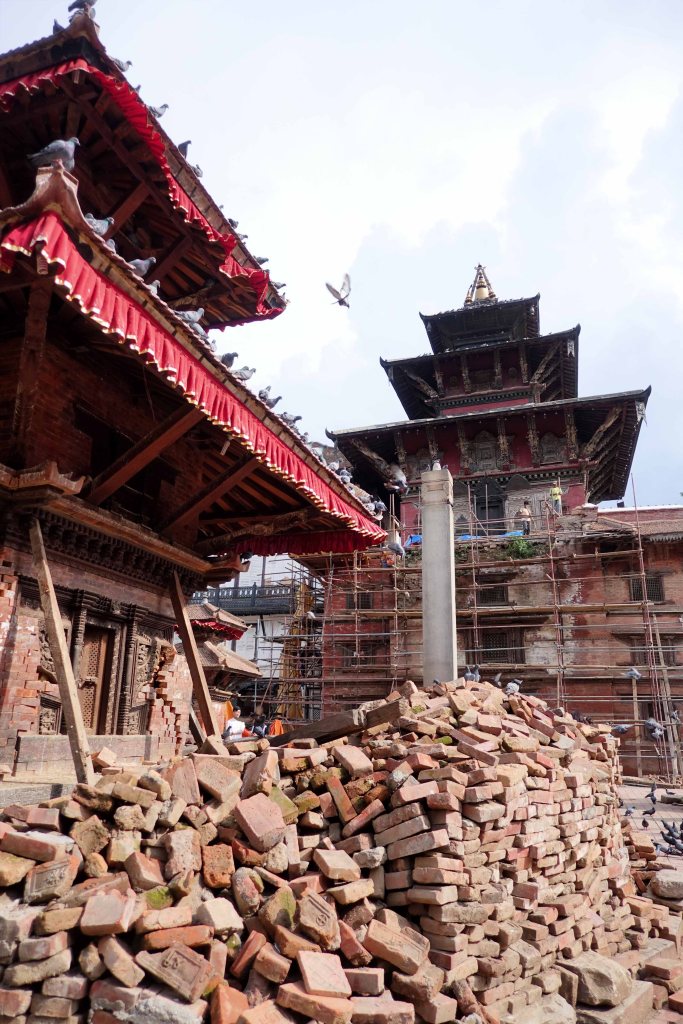 It doesn’t take long to visit the plaza as here in Nepal, they don’t allow access to the temples if you are not Hindu (first time we have seen this in Asia). Other museums in the plaza charge extra so we opted out.

We were “lucky” to be at the right moment at the right time to see a Kumari or Living Goddess. Yes, you read it right, in Nepal there is the tradition of worshiping young pre-pubescent girls as manifestations of the divine female energy or devi in Hindu religious traditions. The word Kumari is derived from the Sanskrit Kaumarya, meaning “princess”. No photos are allowed of this goddess but it was a very quick hello from the window and that was it.

We read more after about this Kumari, we learned about the rigorous process that includes this (wikipedia):  Her greatest test comes during the Hindu festival of Dashain. On the kalratri, or ‘black night’, 108 buffaloes and goats are sacrificed to the goddess Kali. The young candidate is taken into the Taleju temple and released into the courtyard, where the severed heads of the animals are illuminated by candlelight and masked men are dancing about. If the candidate truly possesses the qualities of Taleju, she shows no fear during this experience. If she does, another candidate is brought in to attempt the same thing. Bizzarre….

We walked back to Thamel thru a local market in search of Momos, these are the traditional Nepalese dish and is basically a re-named dumpling. You will be able to find Momo makers in the local market. We always thought they were made by hand!

We found a restaurant recommended by the lonely planet which gave us our first momo  experience in Nepal, it was really really bad but we will not give up and will try again some other day.

We sat down in a rooftop bar to eat and drink. We got the traditional Tongba, which is not really a beer and more like a hot fermented tea. Tongba  is a millet-based alcoholic beverage found in the eastern mountainous region of Nepal and the neighboring Darjeeling and Sikkim. It is the traditional and indigenous drink of the Limbu people of eastern Nepal. It was definitely an acquired taste and it is served in this unique bowl with an aluminum straw.

We were exhausted so back to sleep we went, the next day we would continue our sightseeing in Kathmandu

Bonus Pic of The Day: Because I couldn’t take a pic of the Kumari I stole a pic from the internet for you to see how they look: