Editors note: We are trying to give the blog more exposure. If you have been reading and enjoying reading it please take a minute to like our Facebook page. You will get notified every time something is posted.  Thank you!

Varanasi has been a really interesting experience, from experiencing first hand how death is respected in Hinduism, to getting ourselves lost in the small colorful alleys in Old Town.

Eitan woke up really early to see Kushti, an ancient Indian form of wrestling that is held in a clay pit called the Arkhadas. Dave from Australia joined him as he was also interested in seeing this dying art, the girls stayed at the hotel to sleep more.

This Arkhada was located south of Varanasi, we walked on the Ghats until we reached the area where this gym was suppose to be.

It was really hard to find but after asking many locals we finally found it. Traditional Indian wrestling isn’t just a sport, it’s an ancient subculture where wrestlers live and train together and follow strict rules on everything from what they can eat to what they can do in their spare time. Drinking, smoking and even sex are off limits. The focus is on living a pure life, building strength and honing their wrestling skills. Unfortunately, Wednesdays is rest day so there was not much happening. They still let us walk around their open gym and we talked with some of the wrestlers. 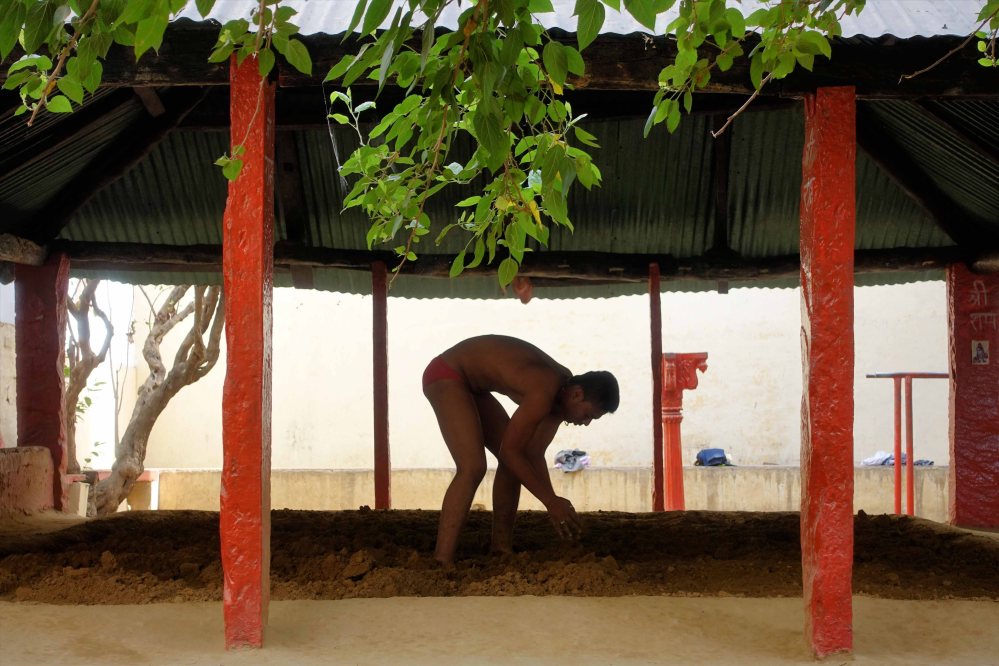 They don’t have expensive weight machines like western gyms, they need to improvise and create their own exercise tools like these weights. Eitan is so strong he could lift just the first one! 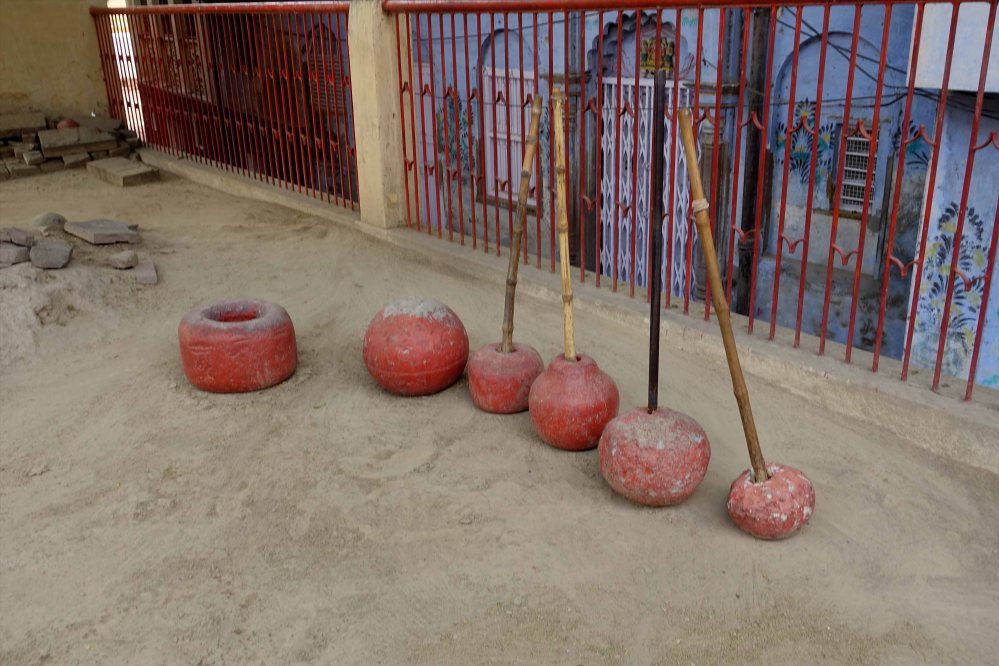 Eitan came back to the hostel just in time to begin with our Varanasi temple tour, we were really exhausted but interested in this one as we had a guy to explain whats up.

First some Hindu gods information for those who are interested, for most of us westerners who are used to only monotheistic religions, it is extremely difficult to understand a religion as complex as Hinduism, but lets give it a try:

Hinduism has 330 million gods, you heard well… 330 million gods. But, Hindus believe that there is one true god, the supreme spirit, called Brahman. Brahman has many forms (those 330 million), pervades the whole universe, and is symbolized by the sacred syllable Om (that symbol that looks like an inverted 3 that hippies have as tattoos). Now, the 3 most important forms of Brahman are:

Enough of this, if you want to learn more there is a nice tool called google.com

We first stopped at the Durga temple, no pictures were allowed inside so I will have to bore you with only the explanation. Durga is the principal form of the Mother Goddess in Hinduism. Durga is regarded by Hindus as the root cause of creation, sustenance and annihilation.

The color red is representative of Durga and is used by many woman who worship this god (most people have favorite gods). All offerings inside are red color to match. Most gods have a color, Shiva is white, Rama is sky blue, Krishna is black and Hanuman (monkey god) is Golden. Most temples have other smaller shrines for other gods. When visiting a Hindu temple always walk clockwise and when touching things always use your right hand (left is for cleaning your ass so its impure). 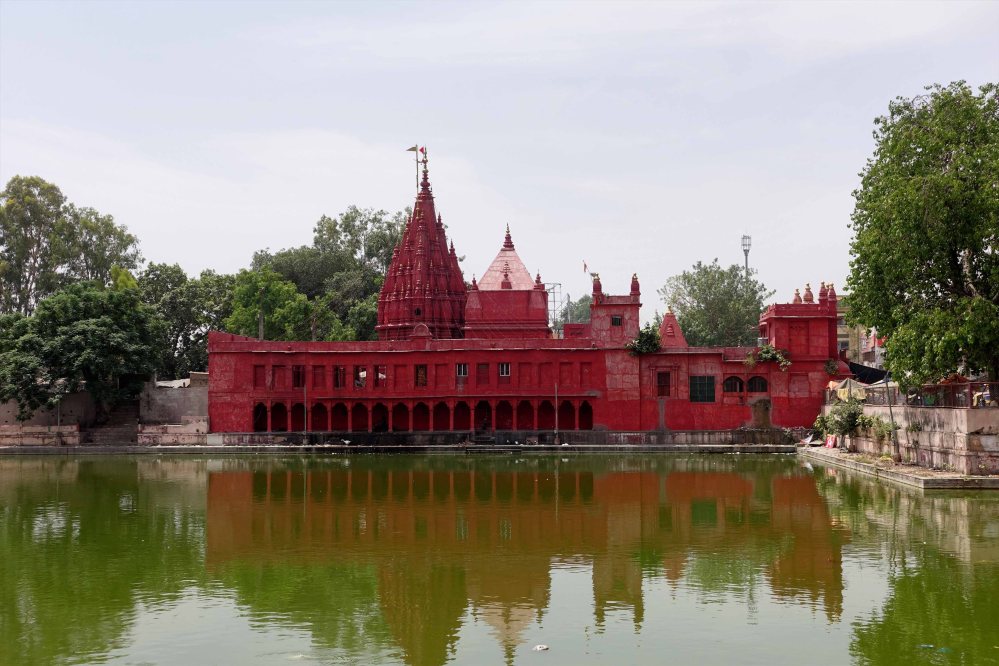 Our next stop was another temple, we were templed-out by that time and honestly I don’t really remember the name of this one or the god worshiped here, but it was a pretty temple.

They were having a nice ceremony. 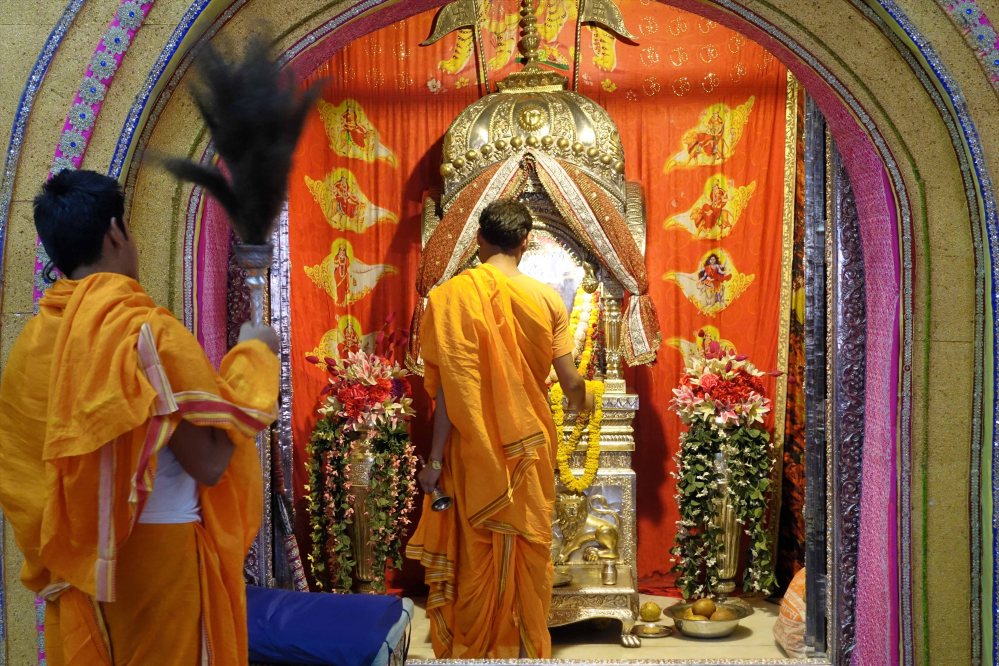 They have an automated concert that plays at the begging of praying times. It is very very very loud. 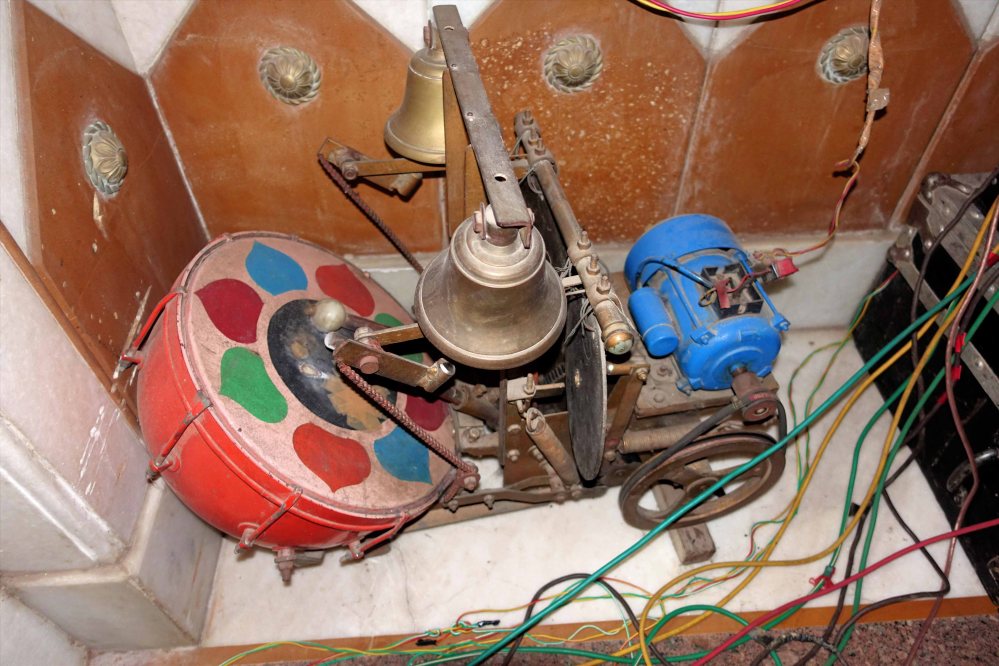 Anil, our guide, was always smiling. The guy behind, an automated robot that is turning the pages of his book, is reading the text that is inscribed in the walls. Anil explained that even though he can read the text, he does not understand it as it is in some poetry form. 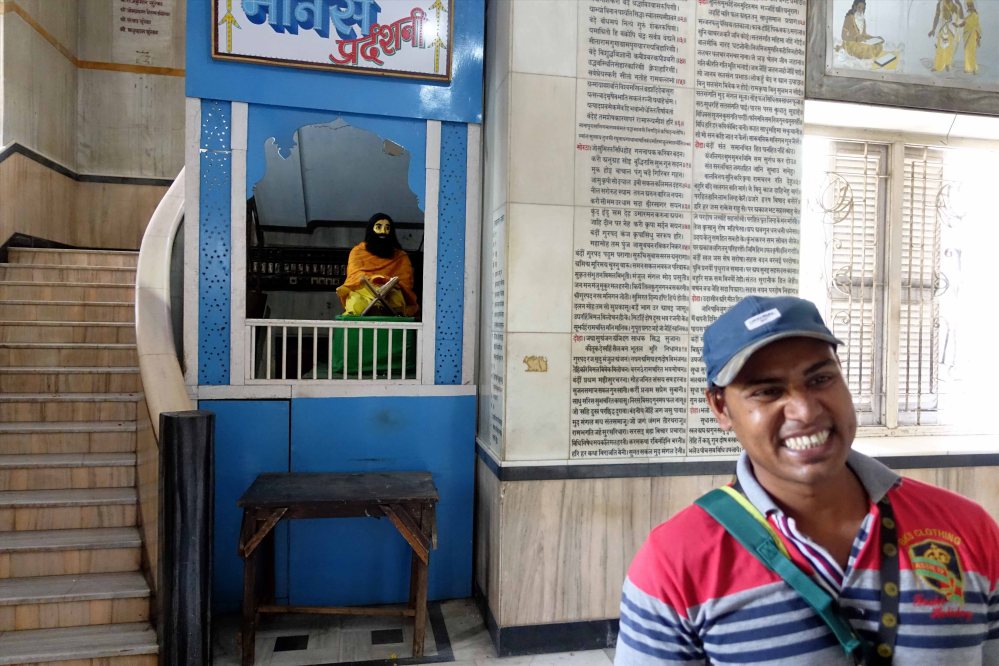 Finally no more temples! We have learned a lot about the oldest religion on earth (who knows if this is true), we have come to the conclusion that people in India might be religious but do not really apply the teachings to their real life here. Hinduism teaches respect for woman, but here we have only seen disrespect to the female gender (remember India is the rape capital of the world?), Hinduism teaches honesty, but most people (I’m generalizing here) have been dishonest to us and always trying to get something from us to the degree that we have become paranoid, aggressive and unfriendly to locals. Its a shame that the guys who scammed us in Delhi will have the balls to go to a temple to pray the next day to the same god they are dishonoring. Just my cup of tea so far in India.

We walked one more time in the Ghats next to the Ganges. There are many shipyards along the river for repair and construction of boats. 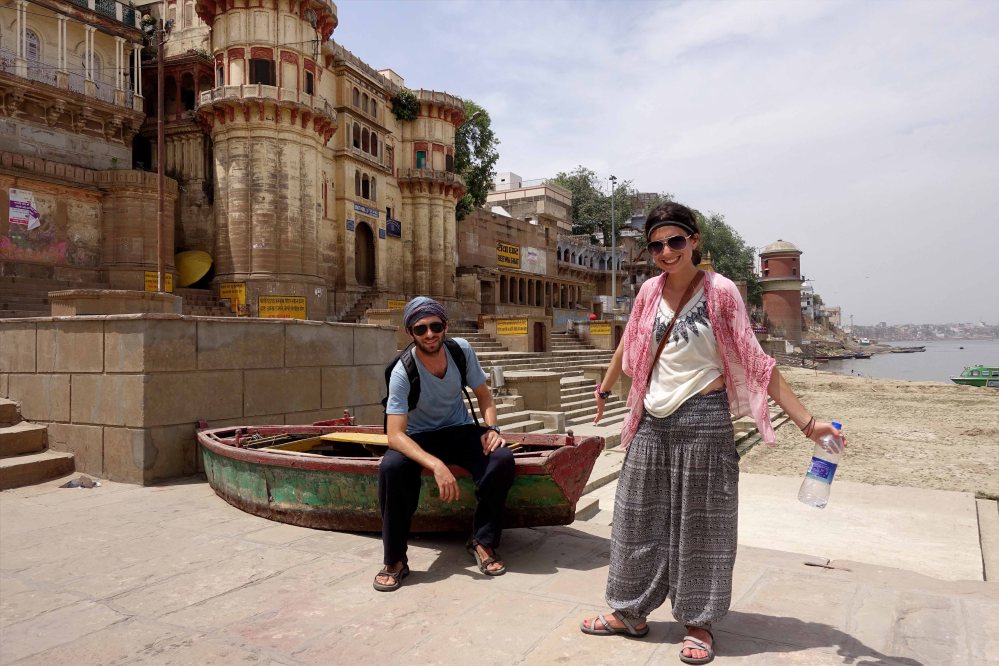 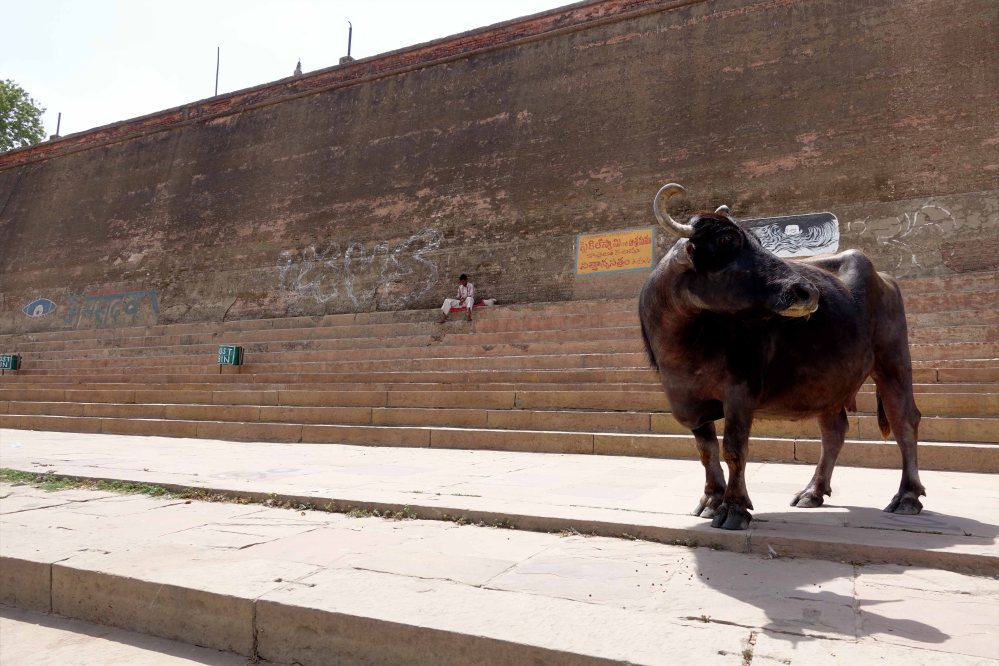 We walked back to the hostel to take our first train to Agra! 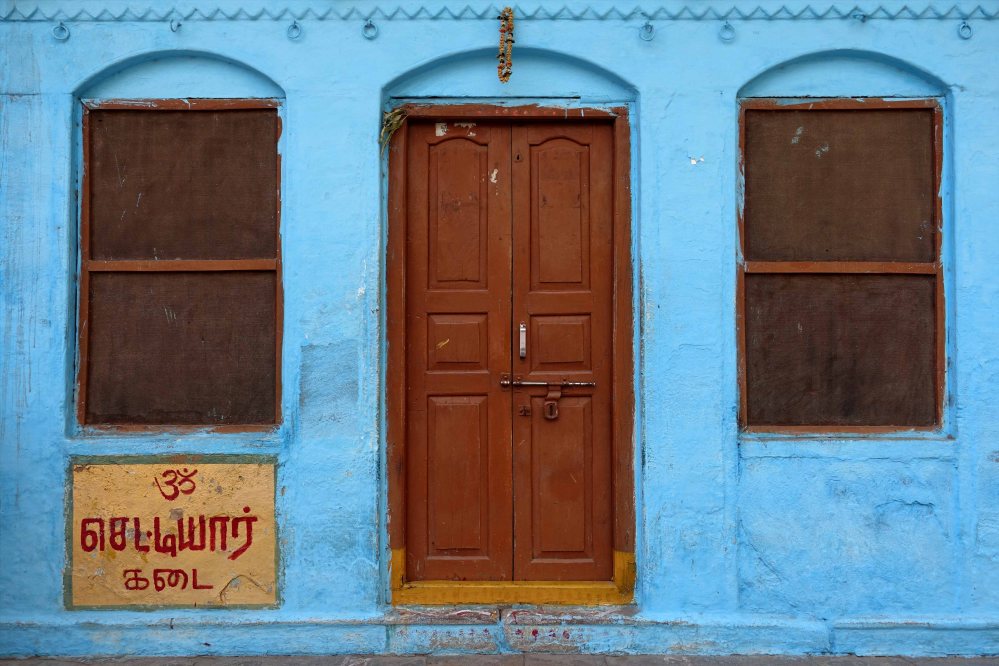 Indian trains are an experience. If you are looking for comfort and luxury you might have to look somewhere else. Trains have several classes, we book the second best option as it is recommended for western tourists. It has air conditioning and you share the compartment with 2 other people, good luck on who do you get as it can make your ride miserable. The difference between the best class AC1 and AC2 (ours) is that AC1 has a door that locks the compartment, also cost more than double. Our tickets said that we had 1 upper and 1 lower bed, but when we got to the train the numbers were switched and we actually got 2 upper beds, a bad thing as we were not as close together. 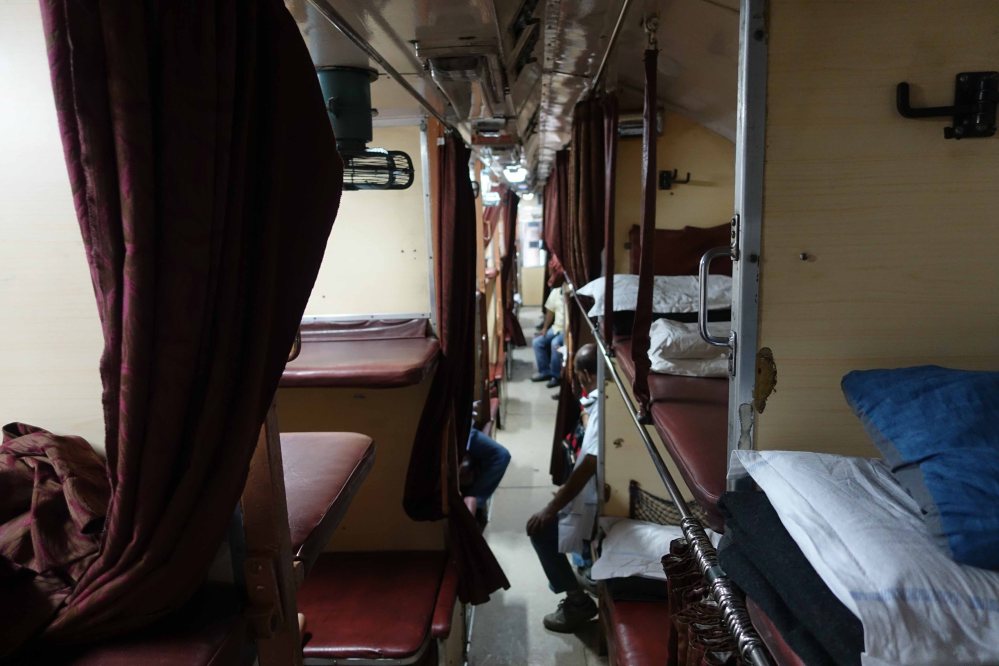 The train we were was manufactured in 2004, but it looks from 1980. The maintenance in this trains is almost non existent, most of the things are broken or have been stolen (and this is second to best class btw).

I took the bed under Sarah because there was nobody there yet, thinking that whoever has that seat will change it for mine without any trouble. The train ride is loud and bumpy, you have food sellers every 5 minutes screaming “Hot Chai” to other things we couldn’t understand. Finally at around 8:00 pm, the “official” food people come, by pure luck I happen to open the curtain at the same moment they were walking buy so I ordered some food. They overcharged us (we knew this because a nice local told us after), but the joke is on them as it was still under $1.5.

The lunch is always a surprise in 2 ways. 1) you don’t know what food are you getting. 2) you don’t know if you will develop explosive diarrhea after eating it as the train food cleanness standards are known to be a little far from optimal. The food was actually not bad at all, the problem is that it was too liquid and with the moving train it was extremely difficult to eat it.

Finally around 11:00 pm, the other passengers in our compartment arrived. We were asleep and they didn’t wait a second to wake us up to demand their seat; Eitan politely asked if he mind switching as he wanted to be closer to his wife. The guy said no so Eitan needed to move. Then, they were making a huge deal that there was still trash from our dinner on the table, ironic that they complain of that but they actually live in a country where there is no culture of throwing the trash in a bin, as seen in every city here where the streets are packed with trash.  They also yelled at Sarah for having her shoes on when walking to go to the bathroom (I guess they felt it was disrespectful because we are inside wearing shoes?? but we would be crazy to not have our shoes on in one of the dirtiest bathrooms ever!!).

The trains have no announcement system and the time of arrival printed in the ticket is always wrong (as warned by fellow travelers), you need to wake up way before, and literally ask every station the train stops to see if that is where you need to get off. Sometimes, there are nice locals that will tell you when your station is next, but most of the times when you ask, you get a rude response or a “I am not going to help you” look.

We finally made it to Agra around 2 hours later than expected. We requested a train station pickup from our hotel and obviously he didn’t show up (when requesting this, they ask you for the train number so they can track it and send the driver to meet you). After calling multiple times, they sent him and he took us to our hotel. Success!!! More about Indian train will come in the next blog posts.

Even though that was a night train, it was exhausting and we really didn’t rest. We walked around the hotel street and we walked by the Oberoi Amarvilas, the best hotel in Agra at the bargain price of $600 a night. We walked in by saying we were going to the restaurant and surprisingly they let us in considering we looked like we couldn’t afford half a Big Mac. 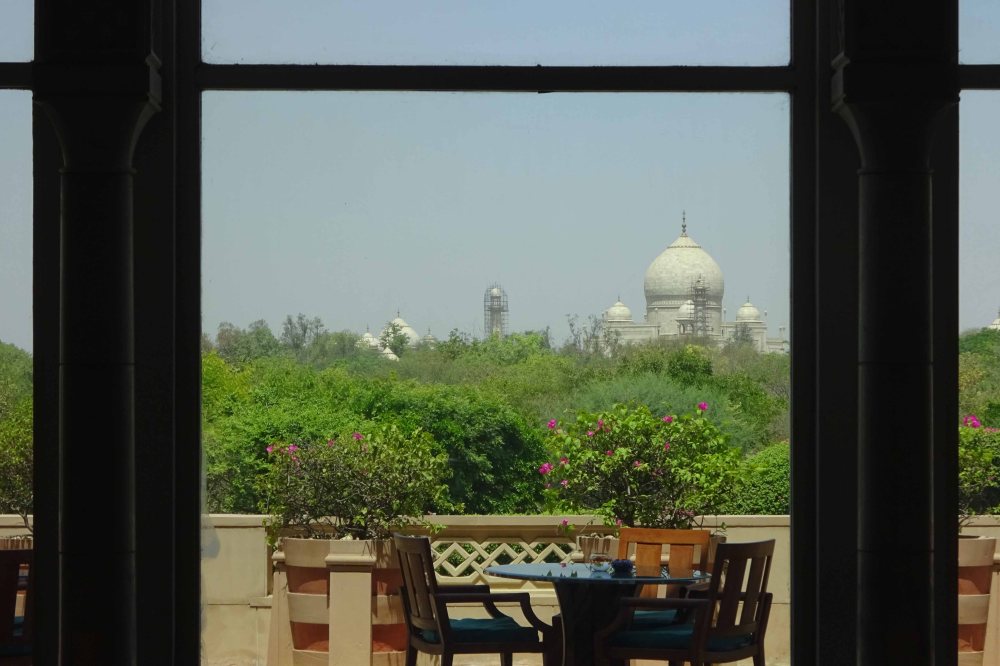 All the rooms of the hotel have a Taj Mahal view (I wouldn’t expect less for $600) and the grounds are breath taking. It is really not India, at all. Even the staff must have been train somewhere else, they receive you with a free bottle of water and a wet towel to clean your face from the city’s pollution that harms your expensive skin.

Anyways, we are just jealous that we cannot stay here and we need to sleep in our $20 a night hotel. But maybe some day we will.

We went back to the hostel to nap because in the afternoon we had to visit the Taj Mahal!

Bonus Pic Of The Day: This is a typical South Indian food menu. As a first timer, this is very hard to know what is what (even if it is in English). The best bet is always go for the Thali, those big samplers plates with some bread in the middle. Delicious!!