We started our morning with the market tour, we visited 4 different markets around the old city of Varanasi. The first one was the Paan leaf market, remember on the last post that weird dessert made of multiple herbal ingredients that you need to put in your mouth all at once? Well, here they buy and sell the leaves. It was chaotic and loud, but really neat to see how this purchases gets made. 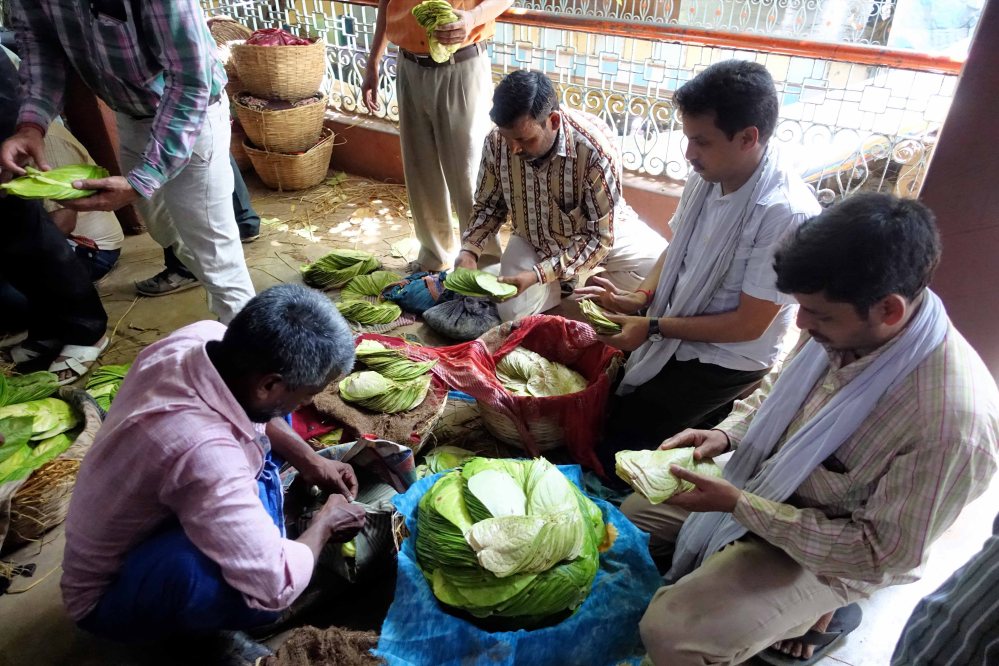 The second market was the flower market, where they buy flowers used as offering in temples. The place was very colorful, mostly orange.  These two bizarre Chinese men also joined us on this tour.

We walked though the spice market as well!

The second and third were smaller markets, one where they sell iron stuff and the other was the cream market where they make Paneer which is the traditional Indian Cheese.

Walking through the alleys is really interesting, here are some random photos of  the Varanasi old city for your viewing pleasure. 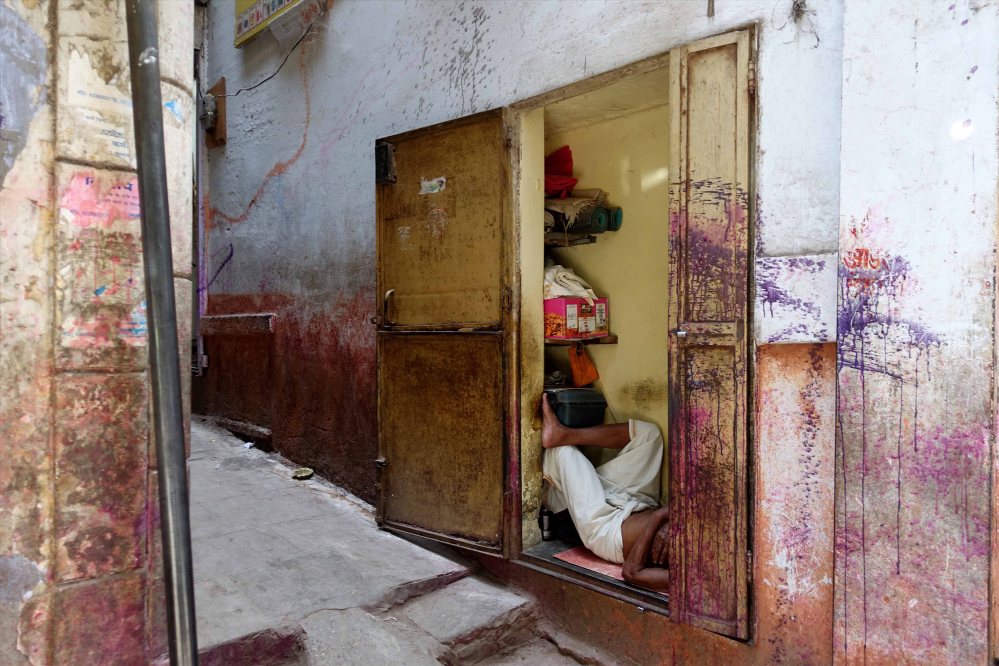 This is an inspiration for Sarah who struggles carrying her much smaller backpack. 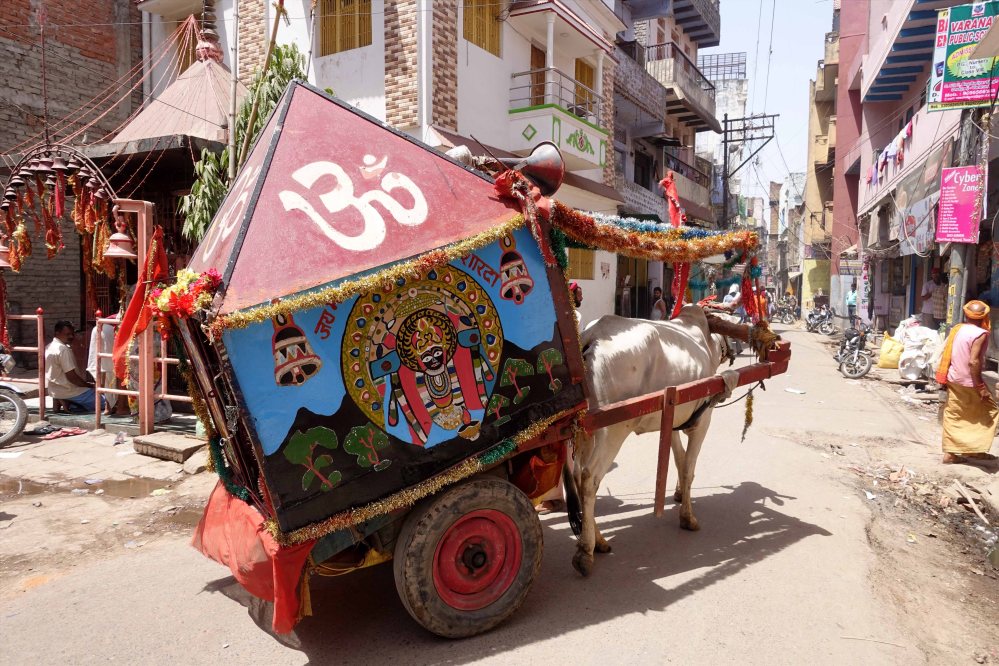 In India you don’t go buy vegetables, the vegetable man will find you!

We stopped for some street Chai tea, by far the best we have tried. A cup cost 10 Rupees which is 15 cents for us. From the smell of cardamom and ginger you can tell it will taste delicious. 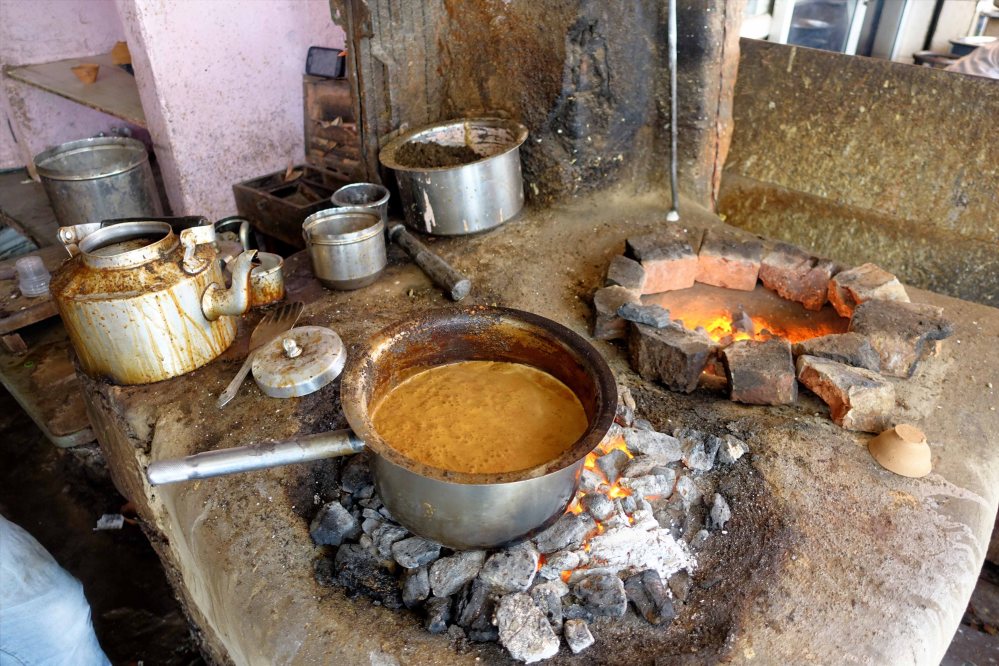 We ate at the Kerala Café, great vegetarian Southern Indian food place close to the hostel. We got several things to try and all of them were great, especially the curd and vegetable salad, the onion – potato Dosa, Sambhal and other things I don’t remember the names.

Remember the clay vase we used to drink our Lassi? we found the girl who sells them. 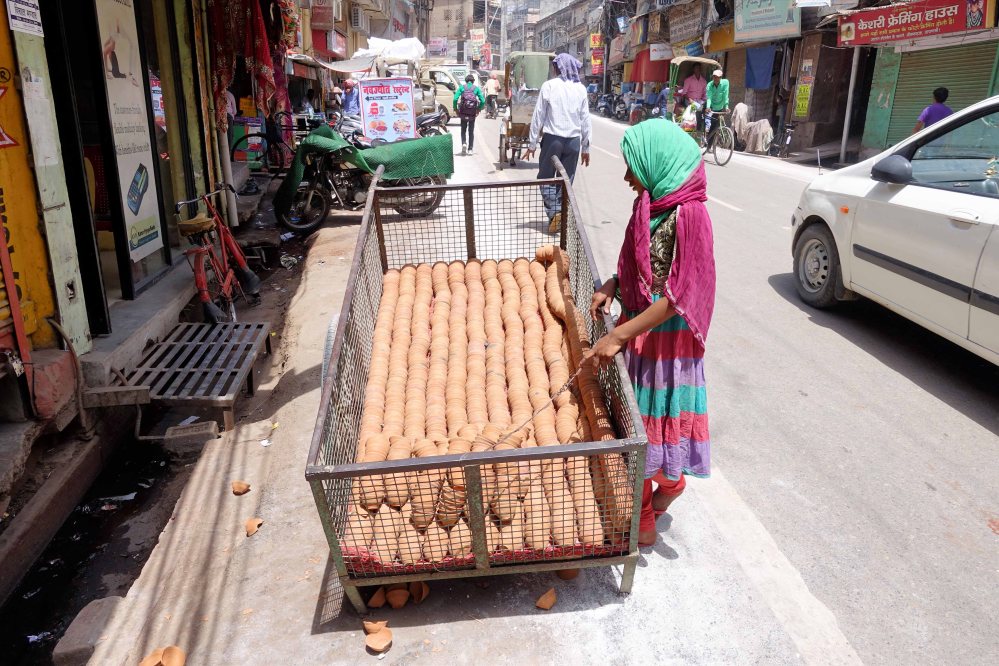 In the afternoon we had the Ghat tour, this was very interesting as we got the explanation of the ceremonies being performed at the Ganges. We took a boat and navigated north until reaching the most important cremation site in Varanasi. In the afternoon, the Ganges are used for different activities like swimming lessons as seen here.

Old people come to this holy city to die, they believe that by dying and being cremated in the Ganges River they will stop the reincarnation cycle and they will reach nirvana. Thousands of old people come here when they are very old to stay in hospice houses where they wait until they die. We shared the boat with backpackers from all over the world.

They don’t allow you to take pictures close to the cremation site for obvious reasons, it is extremely disrespectful for their families. There have been actual fights with tourists after they take a picture of this. So all my pictures are from far away, from a distance my guide said it was ok to take them.

This is the first and smaller cremation Ghat we saw, they cremate around 1 or 2 people at once. Nothing as impressive as the big one we were heading to.

After dying their bodies get carried to one of the two cremation sites in Varanasi where it is bathed in the Ganges to purify their soul and then the body gets burned in public…. Yes, in public. We arrived at the second and most important cremation Ghat, The Manikarnika; this is the holiest of places in Hinduism to get cremated.

Our boat parked in the front row so we could see about 7 bodies being cremated right there in front of our eyes (look for the flames). It was surreal and definitely not something I would like to see again, but we need to understand the reasons they do it and see it as a religious ceremony. For Hindus this is normal, for us in the western world it looks like a movie.

At the time of the cremation a “Puja” (prayer) is performed. Hymns and mantras are recited during cremation to mark the ritual.  and Harishchandra Ghats are dedicated to the cremation ritual. Annually, less than 2 in 1000 people who die in India, or 25,000 to 30,000 bodies are cremated on various Varanasi Ghats; about an average of 80 per day. This practice has become controversial for the pollution it causes to the river. In 1980s, the Government of India funded a Clean Ganges initiative, to address cremation and other sources of pollution along the Ghats of Varanasi. In many cases, the cremation is done elsewhere and only the ashes are dispersed into the river near these Ghats.

For us, we stayed waaaay to long watching those bodies burn, I was extremely uncomfortable as they put one fresh body and put him/her on fire, you could see their feet becoming charcoal. It suddenly started to rain ashes on the boat. It was terrible as everybody started to sneeze dead people.

There was a line of dead bodies waiting to be cremated, there are also different height levels where you can get cremated, the higher class the higher you will get burn (remember India still has a very primitive caste system). The lower class is burning next to the river on the lowest level. Bhramans and other holy people like children and pregnant woman cannot get cremated and they just put their full bodies to float on the river. Luckily we didn’t have any bodies coming to say hi close to our boat.

One interesting thing is that after they extinguish the fire, some ashes will be used for the ceremony where they get delivered in the Ganges; after this, there is a group of people that will come look for the jewelry that didn’t burn. After finding the jewelry they will give it to the owner of the cremation site and he will give it to the employees as an extra tip. Some of the body parts that are still complete are put in the river but the stray dogs go take them, it is not uncommon to see a dog chewing a human finger.

They also told us that the man’s heart never burns and if a woman had children her hip bones never burn so those are placed separately into the river.  We are unsure why they feel a woman’s heart can burn and a man’s heart can’t but we were careful with the questions we asked as we didn’t want to sound judgmental of their traditions.

If you are curious on what is on the other side of the river, the answer is nothing. Varanasi suffers from yearly floods where everything on that side wouldn’t survive. The towns on that side start several kilometers away. 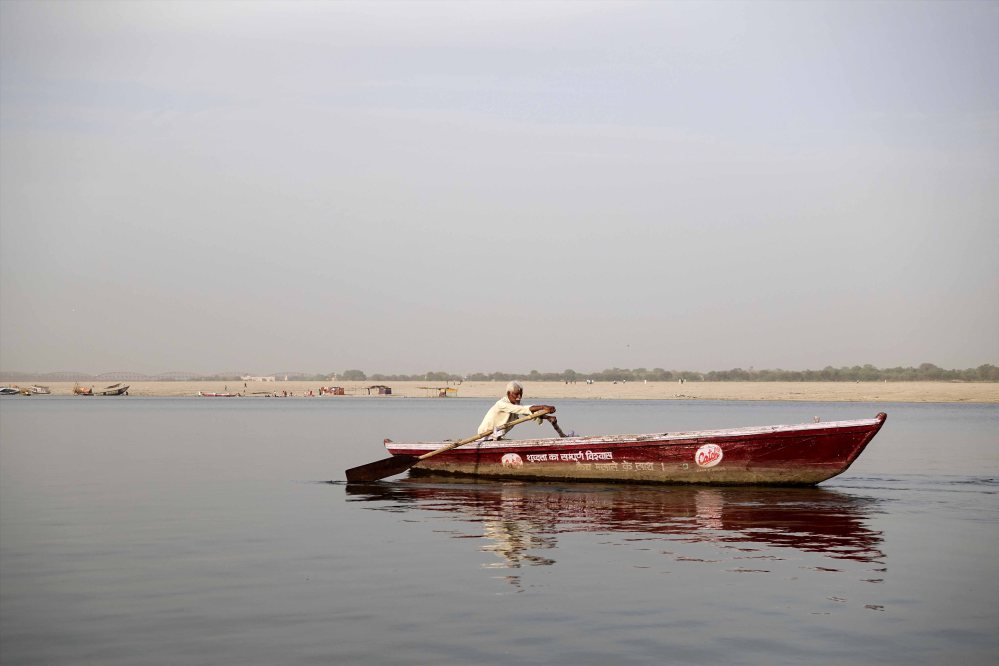 After spending waaay too much time here we finally turned around and headed to the most important Dashashwamedh Ghat. Here every evening at 7:00 pm the Aarti (ceremony) called “Agni Pooja” (Worship to Fire) wherein a dedication is made to Lord Shiva, River Ganga (the Ganges), Surya (Sun), Agni(Fire), and the whole universe. (curious fact: In Indian weddings, the Ganges River is always invited, they place an invitation to float here).

The ceremony is definitely very mystical with the use of fire and smoke. This crematory started in 1994 as a response to all the tourist (local and foreigners) that wanted to see the ceremony taking place in public. Since then this is the biggest tourist attraction in Varanasi. 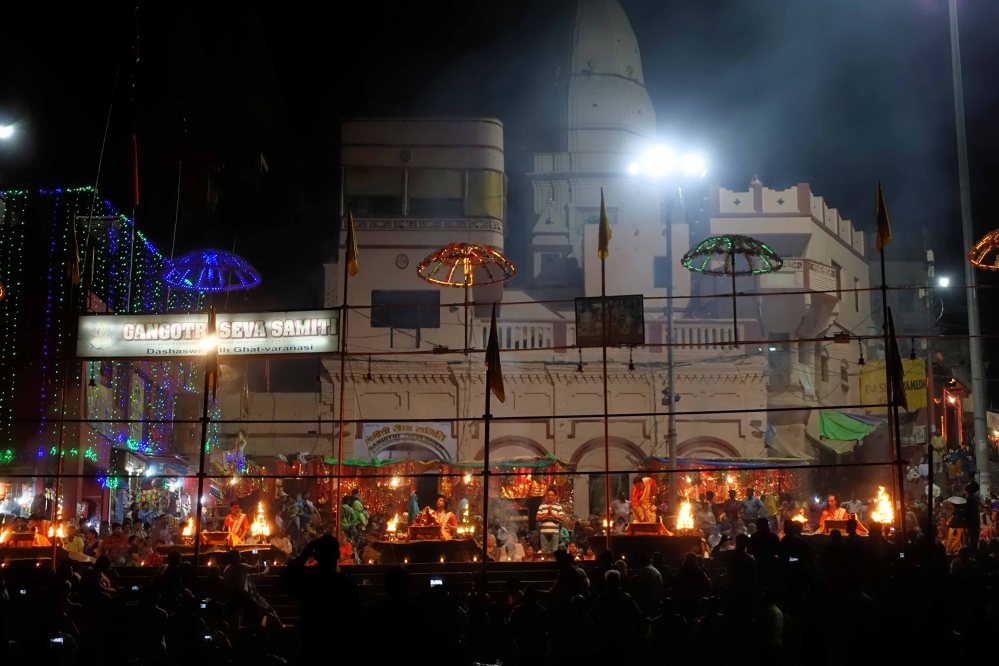 To ask mother Ganges for forgiveness after sneezing dead people, we bought a candle offering that you put to float dangerously close to the wooden boats. 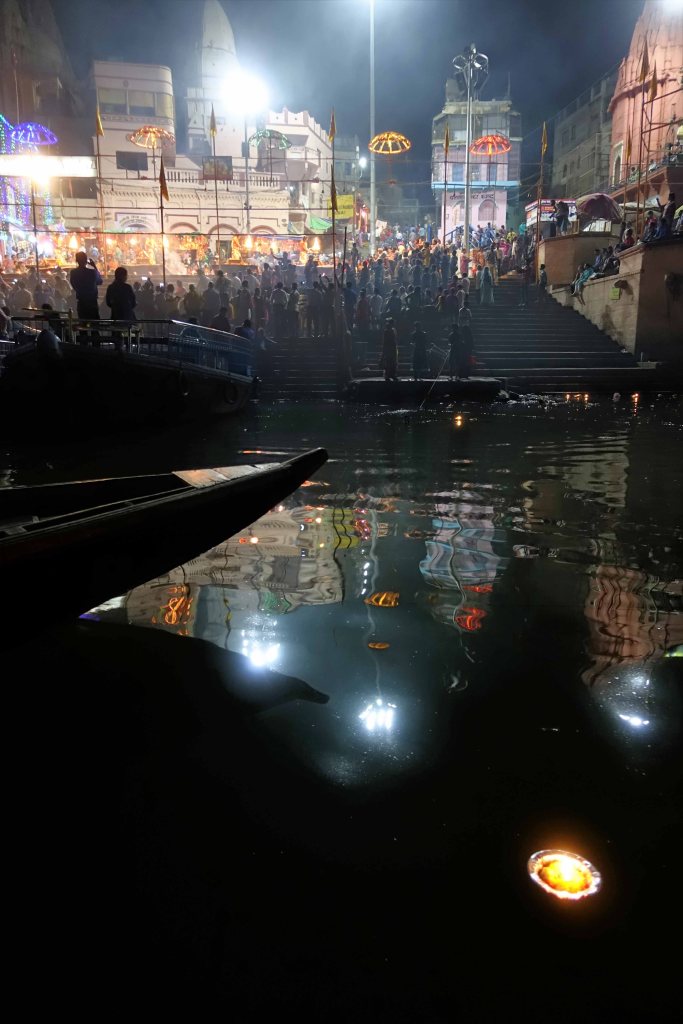 We asked the guide to drop off us nearby so we can have dinner at a very famous bakery with 2 guys from Australia, Dave and Sarah. We walked through the old city small alleys at night, which was a completely different experience. Surprisingly it was still very lively. 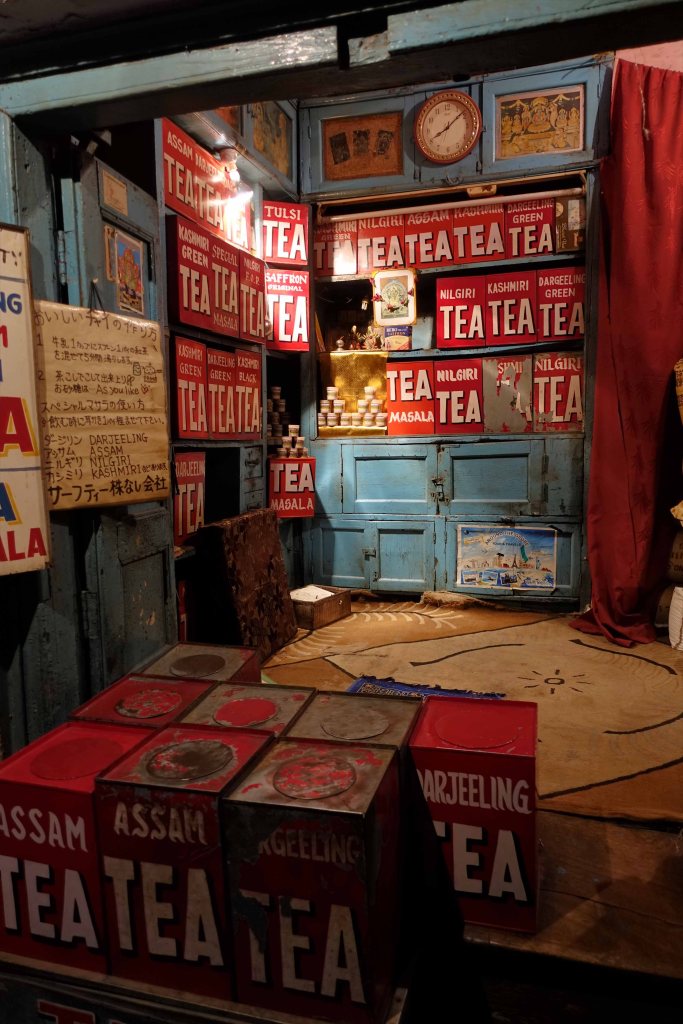 They had a concert going on with traditional chill indian music, but the food was terrible because Eitan made the mistake again to ask for western food in India! Sarah was smart and stuck to curry. We went back to the hostel for our deserved sleep hopefully without nightmares after what we saw. 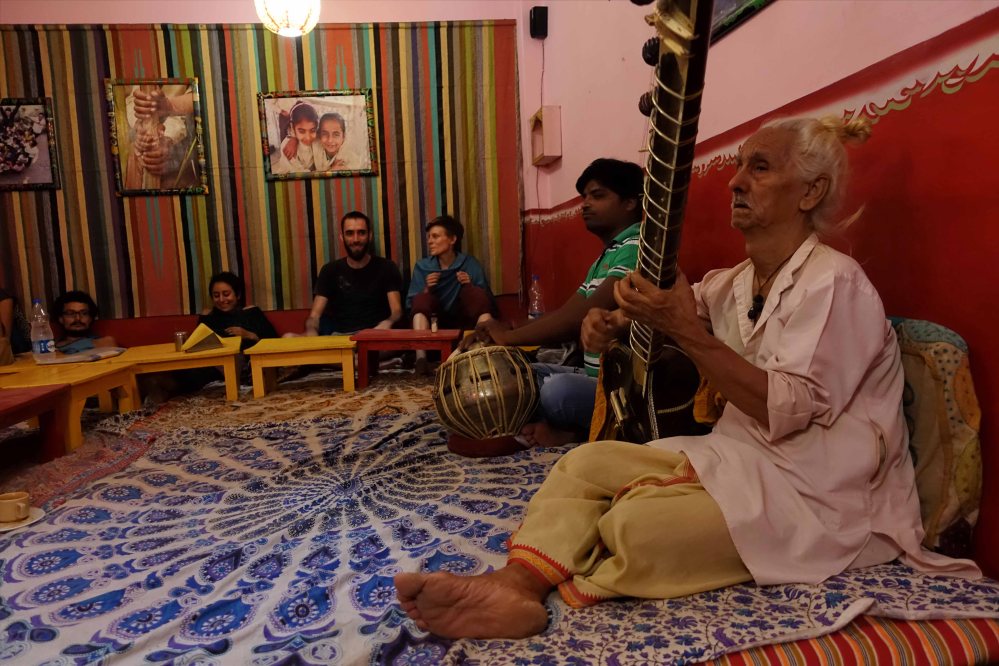 Bonus Pic Of The Day: Is this Hitler’s Indian summer house? Nop. Swastikas are sacred and auspicious symbol in Hinduism, Buddhism and Jainism and dates back to before 2nd century B.C.; It means good luck and auspiciousness, you will see them everywhere here in Asia.

So remember, if you see one white guy with his head completely shaved, wearing a black letter jacket and boots, with a red swastika in his arm, do not fear, he is probably a devote Hindu. 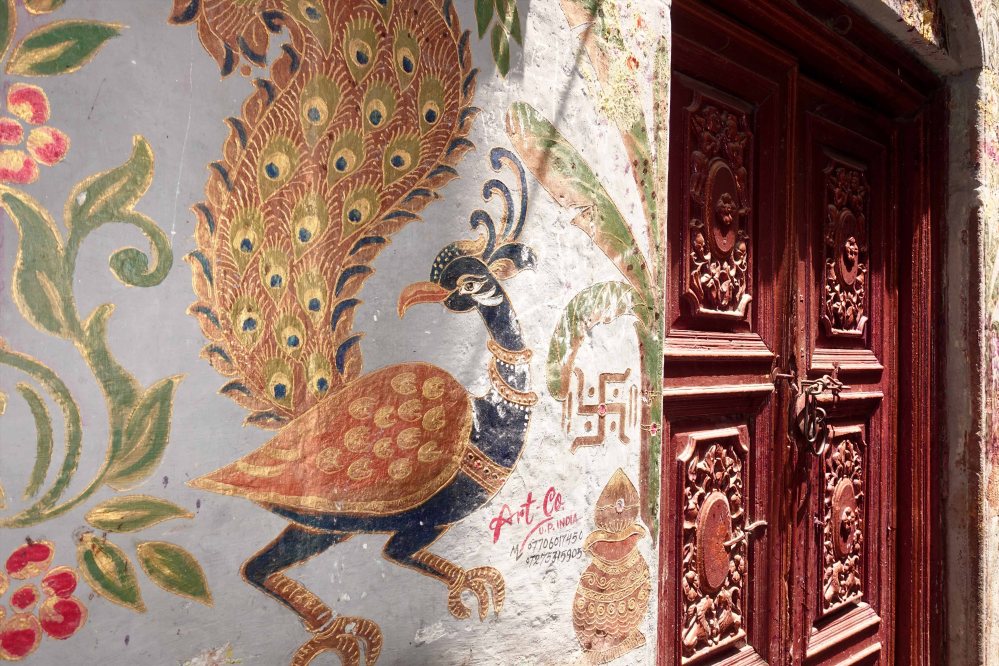