Delhi day #3: We are still alive; this is our last day sightseeing hell. It’s funny because everybody that we have been talking to tell you that they hate this city (locals and tourists alike). Most travelers even skip it; most locals get scammed as well. We have found the touristy sites here impressive, so we were excited for our last day.

We rented another driver for the third day, our second day driver was extremely annoying trying to convince us to hire him for a month in Rajashtan, we said NO multiple times but he never gave up; we obviously didn’t hire him for 1 month and also requested a change of drivers, that will teach him (or not because its India).

The first stop was Qutb Minar,  at 72.5 meters, is the tallest brick minaret in the world, and the second tallest minar in India. 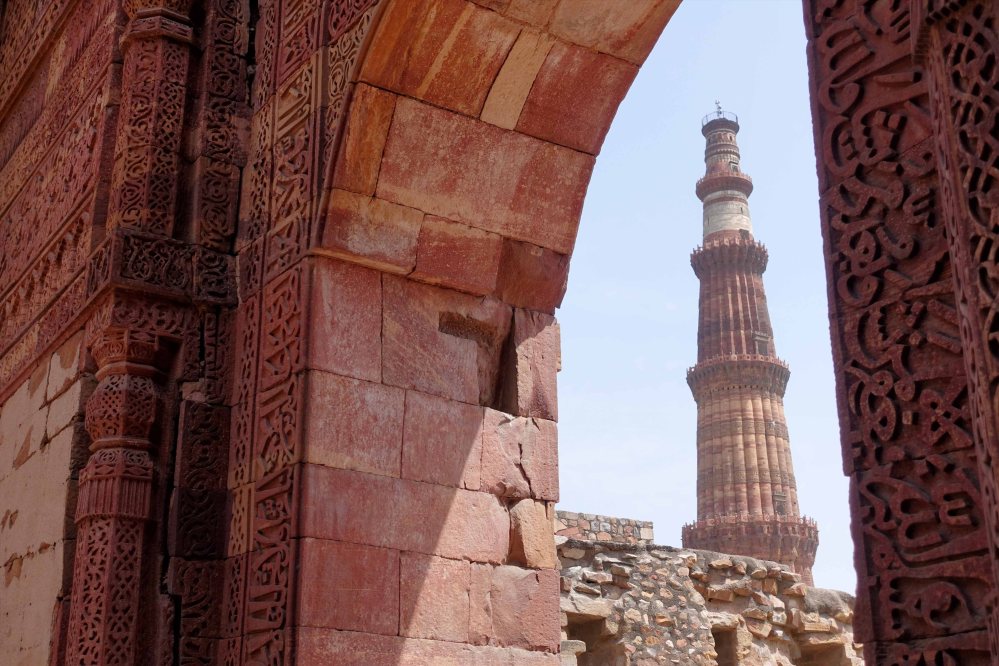 In 1200 AD, Qutub-ud-Din Aibak, the founder of the Delhi Sultanate started construction of the Qutub Minar. In 1220, Aibak’s successor and son-in-law Iltutmish added three storeys to the tower. In 1369, lightning struck the top storey, destroying it completely.

Try to find Sarah at the bottom of the Minar, you will see its massive size, but the Taj Mahal is a few feet taller! 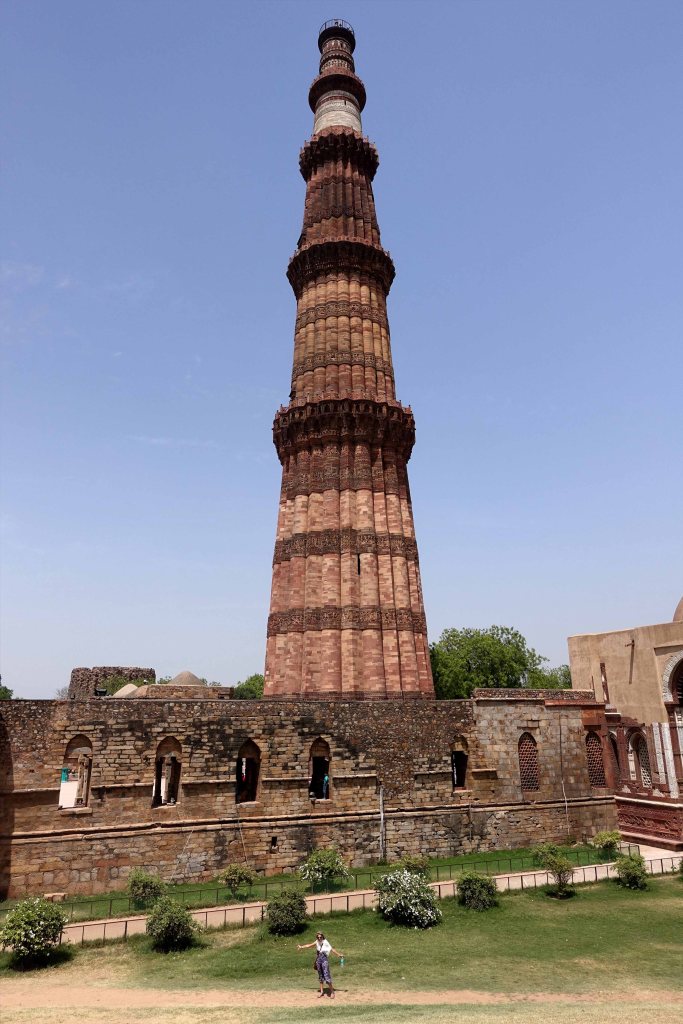 Qutb Minar is surrounded by several historically significant monuments, which are historically connected with the tower and are part of the Qutub Complex. These include the Iron Pillar of Delhi, Quwwat-ul-Islam Mosque, Alai Darwaza, the Tomb of Iltutmish, Alai Minar, Ala-ud-din’s Madrasa and Tomb, and the Tomb of Imam Zamin. 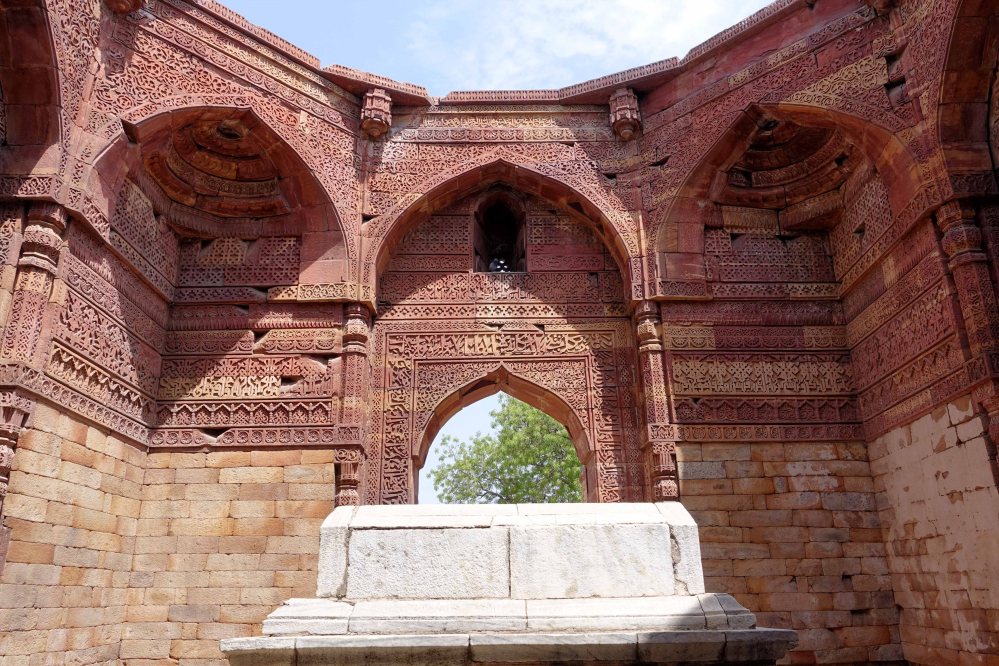 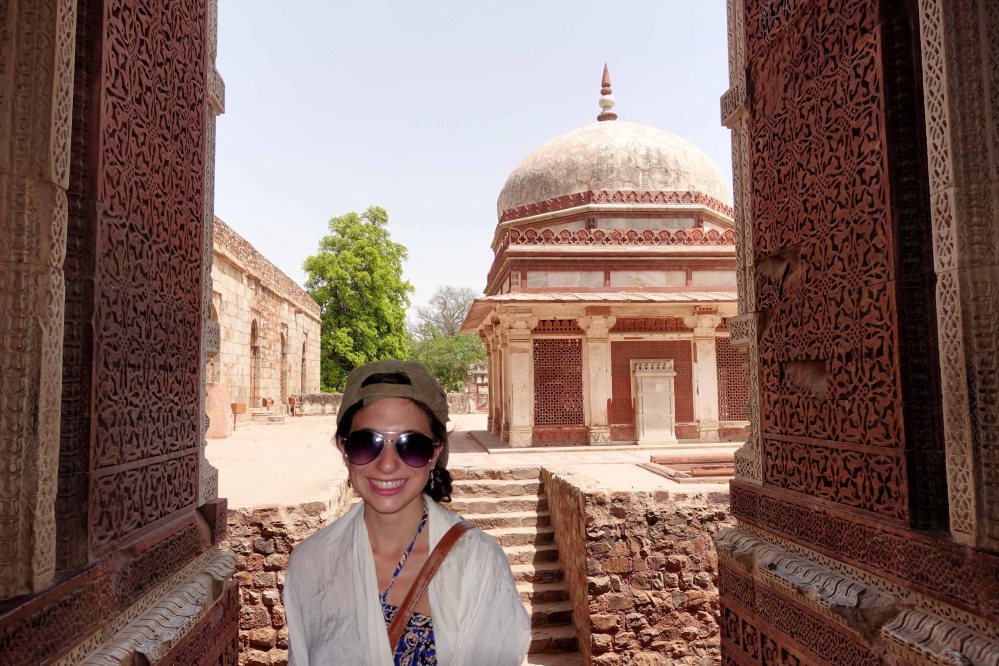 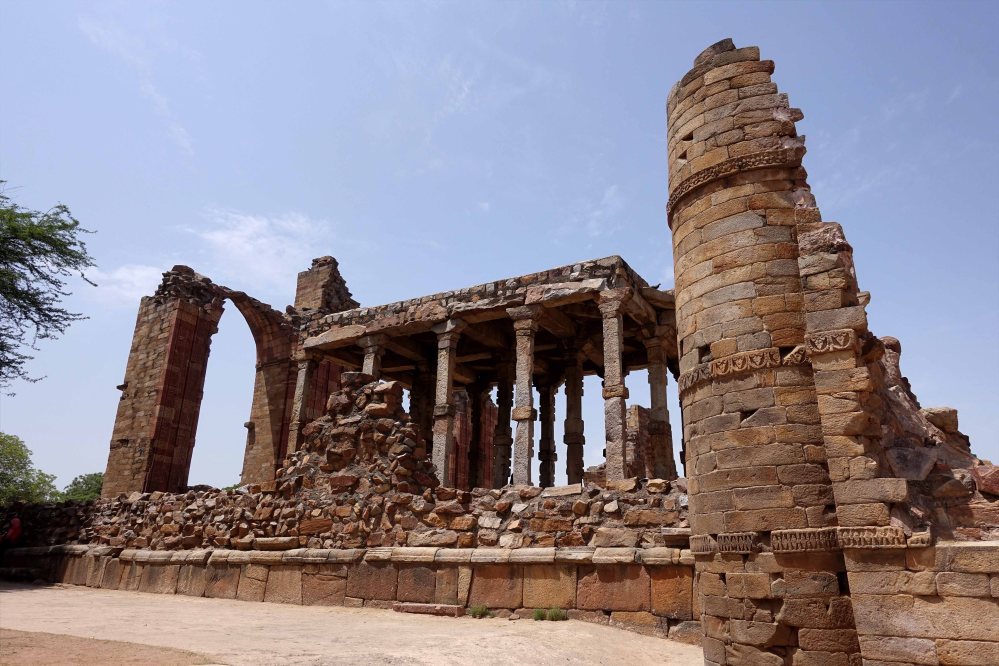 It was extremely hot, around 115 degrees so were maximizing shade and stopping for water every 10 minutes. It’s crazy how much water you can drink here and still be thirsty, our bodies are not used to it. 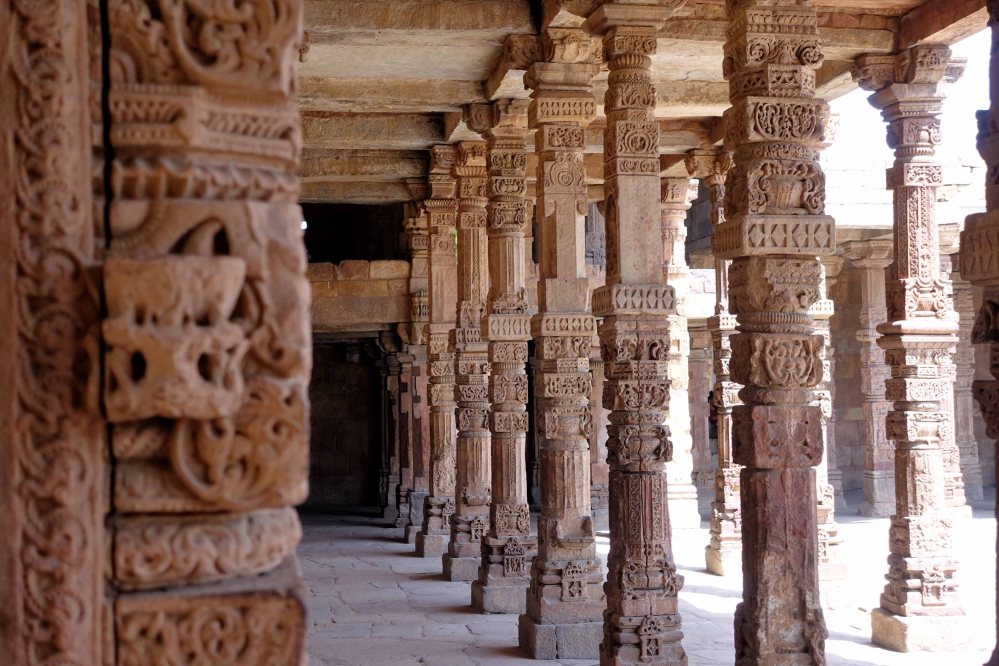 Our second stop was Ghandi Smiriti, formerly known as Birla House or Birla Bhavan, is a museum dedicated to Mahatma Gandhi. It is the location where Mahatma Gandhi spent the last 144 days of his life and was assassinated on 30 January 1948. It was originally the house of the Indian business tycoons, the Birla family. 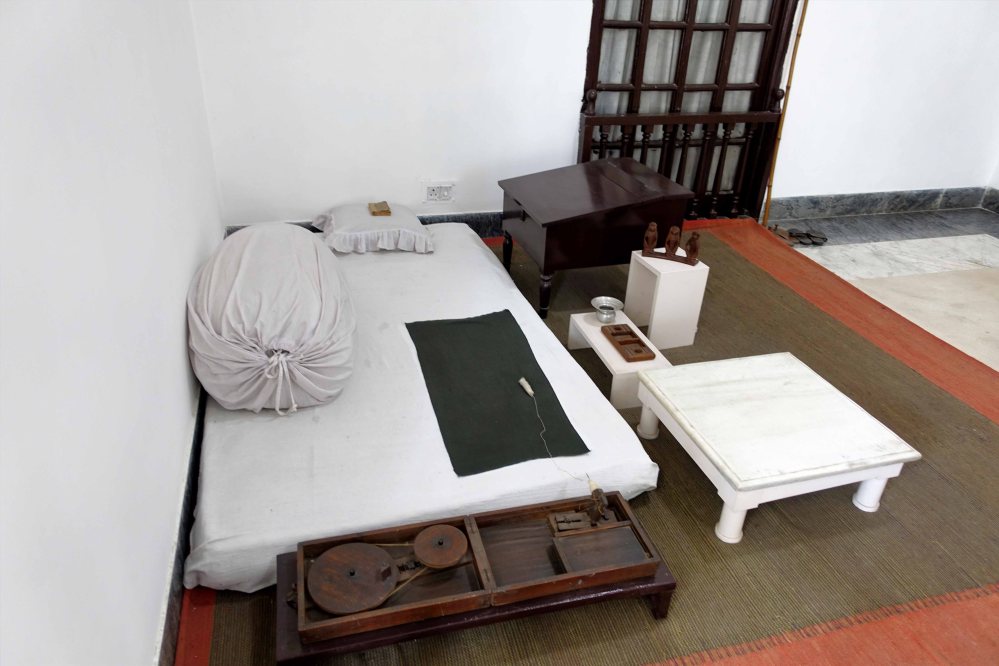 The museum houses some articles used by him like his famous glasses, same design taken by all the hipsters that wear them in Coachella. 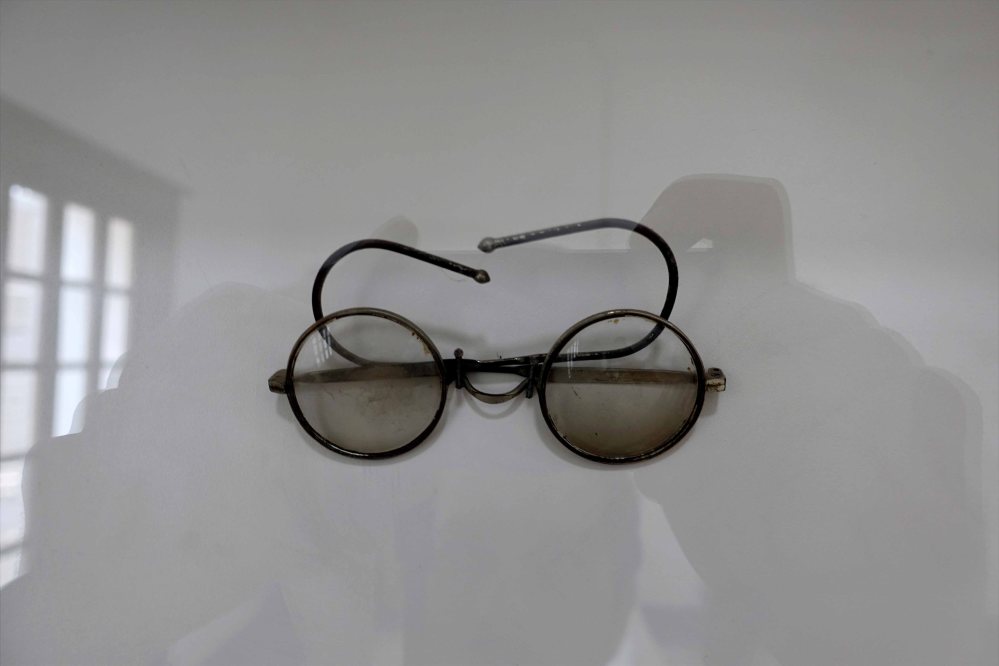 The walls are covered in texts, from the history of Indian Independence to Gandhis’ teachings, but it mainly focuses in Ghandi’s last years. We tried to read a few but it was waaaay too much and it became boring after a while. 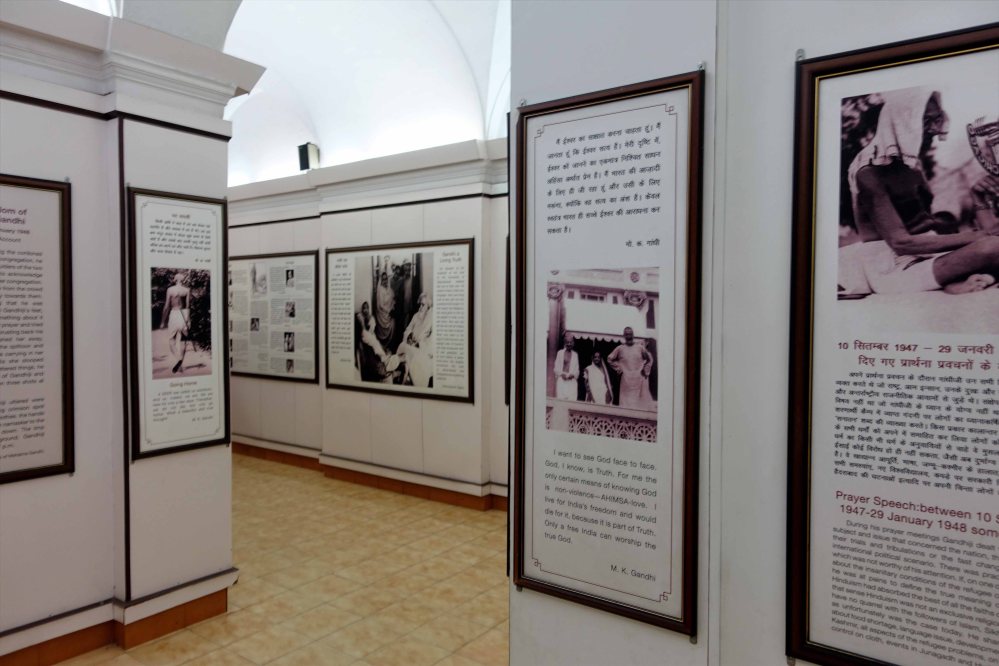 On the second floor they have one of the first interactive museums in the world. It was ridiculously bad, it was only interactive because you have a guide that tells you what you have to touch to make some light turn on, everything related to Gandhi in a cartoonish way. We made our way out as soon as possible and walked around the house gardens which are beautiful. With those gardens even I become peaceful. 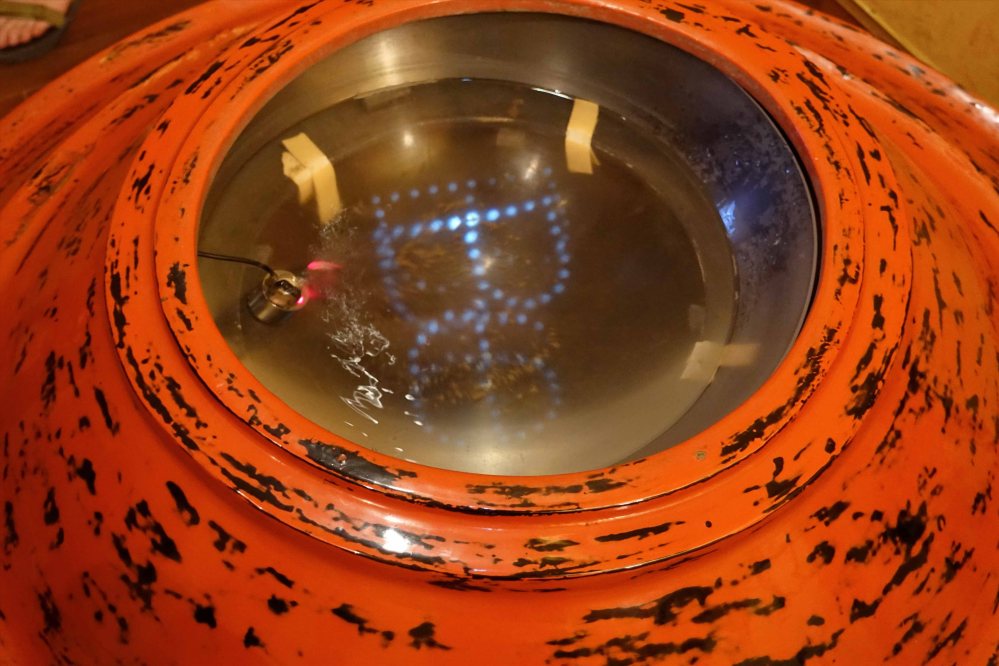 It was Interesting to see that Gandhi’s house is located in one of the richest neighborhoods in Delhi, full of mansions where politicians and business men live right now and a very peaceful street without honking and tuk tuks everywhere. The garden here is were he was shot and killed. 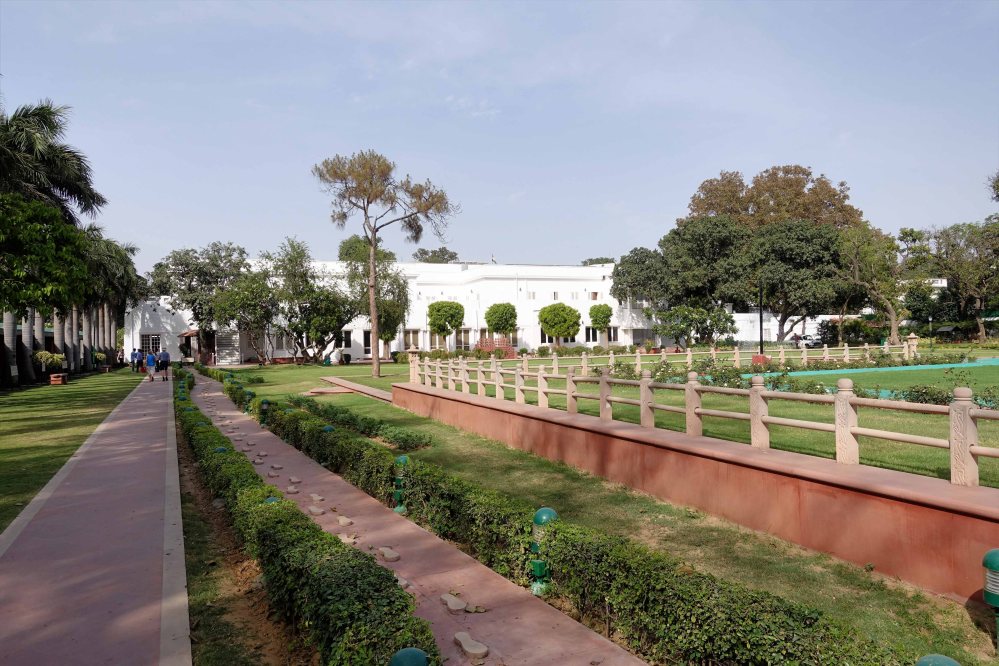 The temple we visited next was an experience to remember. Neither of us has visited a Sikh temple before even though they are the 5th largest religion in the world!! I bet you didn’t know that!!!

Gurudwara Bangla Sahib is one of the most prominent Sikh gurdwara (Sikh house of worship), and known for its association with the eighth Sikh Guru, Guru Har Krishan, as well as the pool inside its complex, known as the “Sarovar.” 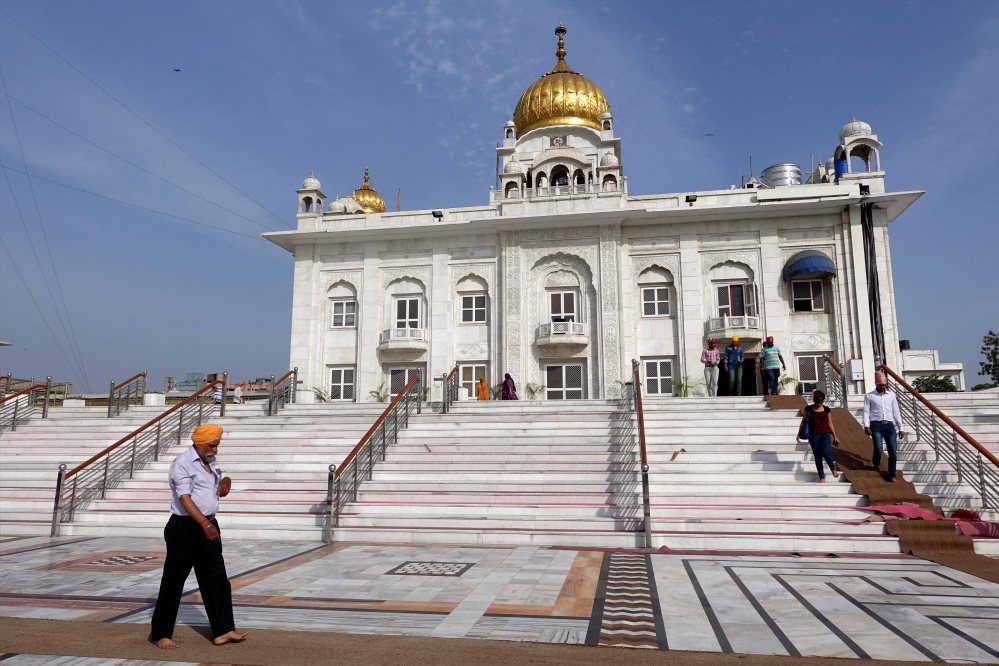 Sikhism is a monotheistic religion that originated in the Punjab region of South Asia (subcontinental India) during the 15th century. The fundamental beliefs of Sikhism, articulated in the sacred scripture Guru Granth Sahib, include:

Although one of the youngest amongst the major world religions, with over 25 million adherents worldwide, Sikhism is the fifth-largest religion in the worldTo recognize any Sikh you can check their last names, male Sikhs have “Singh” (Lion), and female Sikhs have “Kaur” (princess) as their middle or last name.

The priests here really look they came from 600 years ago. Sikhs who have undergone the khanḍe-kī-pahul (the Sikh initiation ceremony) may also be recognised by the five Ks: Kesh uncut hair which is kept covered, usually by a turban to protect the Dasam Duwar (“god head”); an iron or steel bracelet; a kirpan (a sword tucked into a gatra strap); kachehra, a cotton undergarment, and kanga, a small wooden comb. 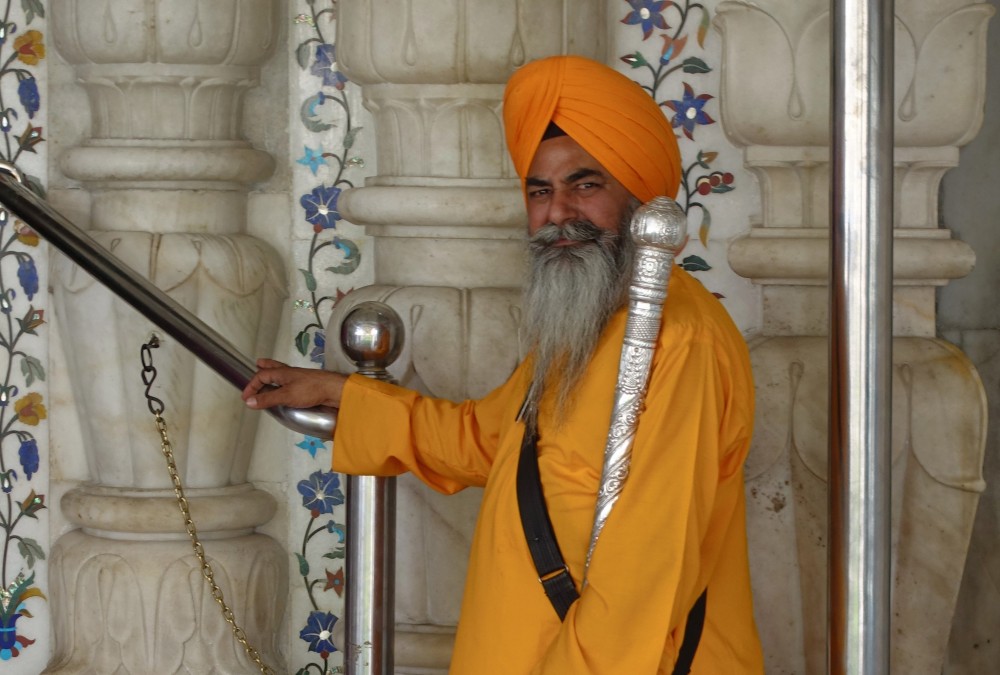 When entering the temple you need to leave your shoes (as any other temple and basically the most annoying task of traveling in temple filled countries), we both needed to cover our heads; as I don’t know how to make those fancy turbans I settled with a pirate looking orange bandana. You need to clean your feet in cold water which took us immediately to nirvana (after being in that hot weather). 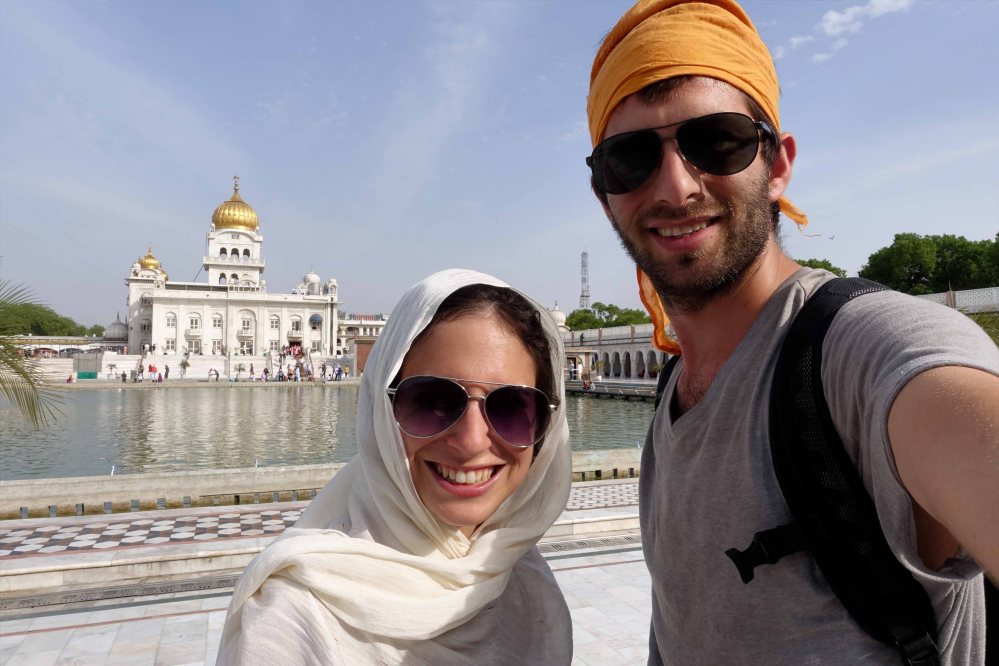 Every Sikh temple has a very tall orange flag to mark the temple’s location, very easy to see from far away. We entered the temple where they have a recording 24/7 of them praying so you can follow the chants (and maybe to avoid paying some cantor’s salaries). 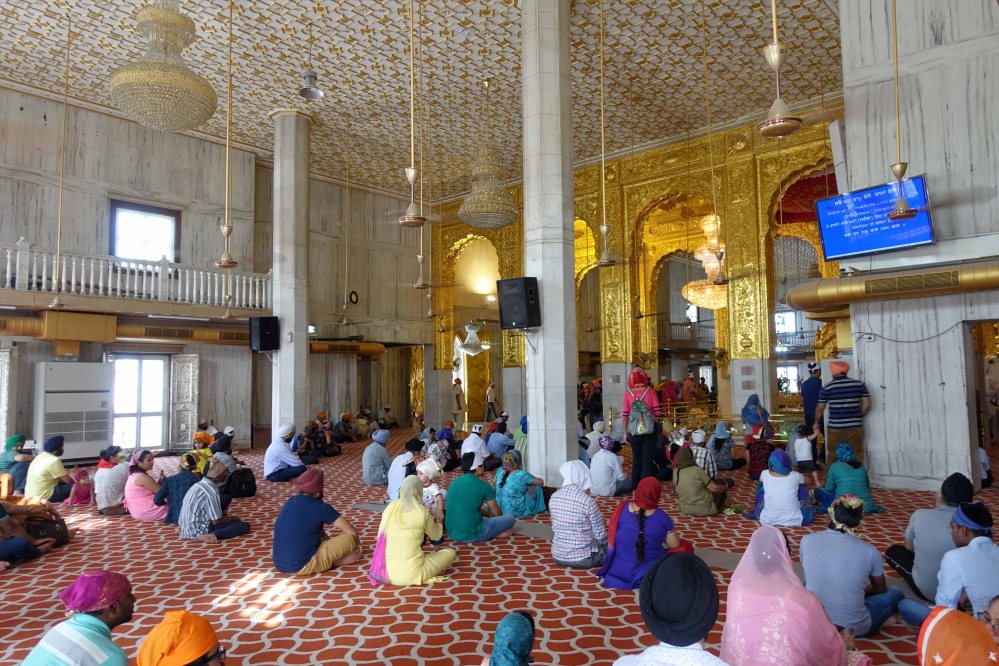 Sikhs consider Guru Granth Sahib, the holy book, to be the eleventh guru or the leader that provides direction for day to day living as well as guidelines for the spirituality. The book is under those red garments. 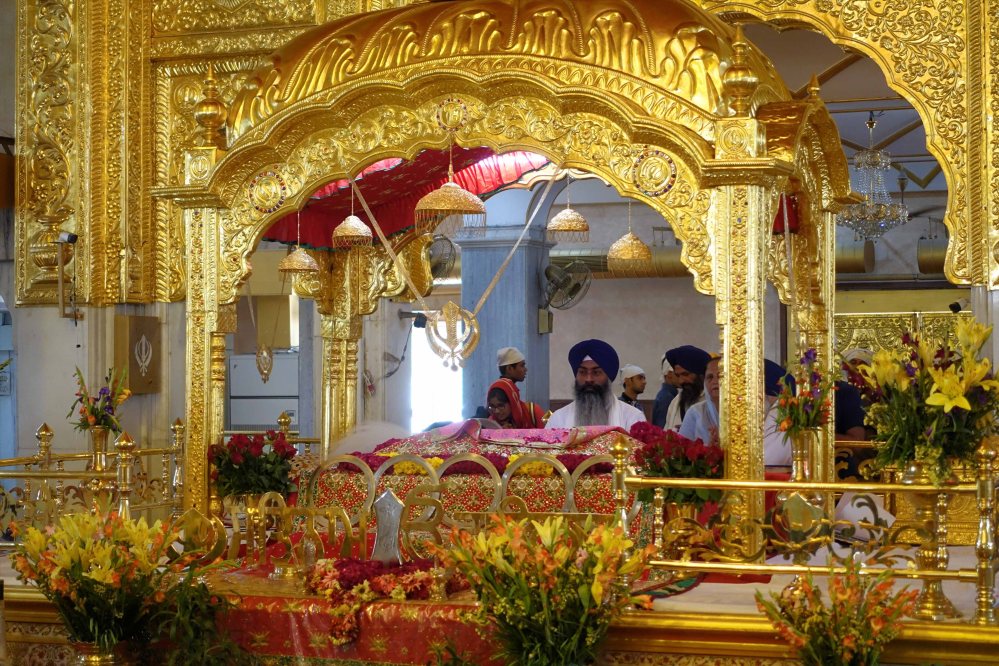 The Sikh religion is super cool and accepting of other religions and traditions, through history the Sikh emperors that have ruled these areas made all religions equal and there were no signs of “kill the infidels” episodes. They also believe in gender equality and they don’t believe in rituals (that’s what they say but we saw about 5 different rituals in the first 20 minutes we were there).

Sorry other religions, but the Sikh has the coolest and most badass religious symbol, The Khanda. I kind of want to become a Sikh just to wear that one on my chest or maybe get a tattoo on my whole back! 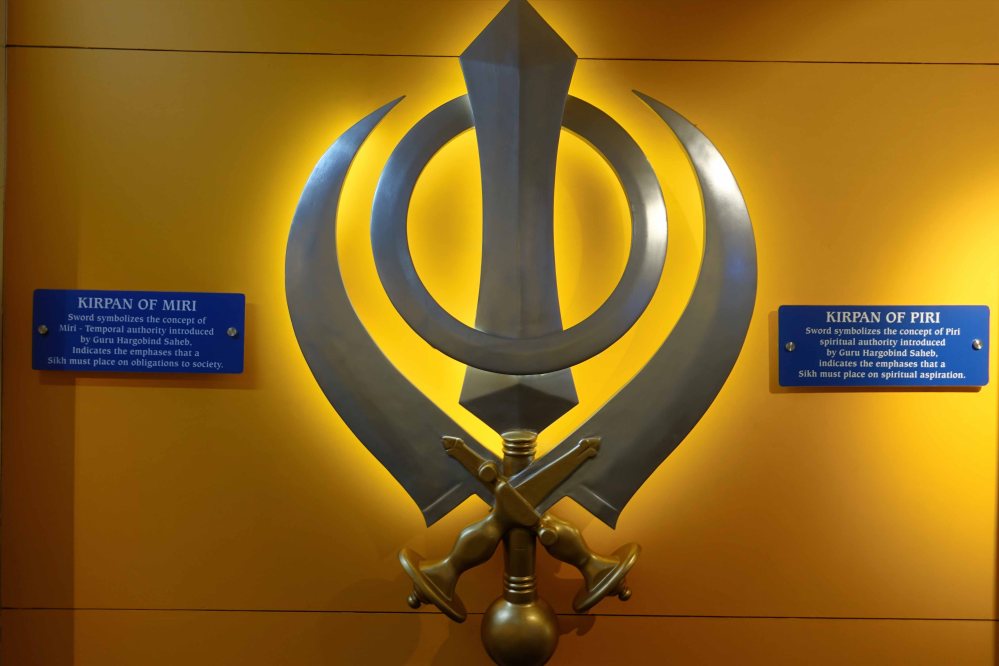 When Sikh go to temple, they buy this weird pudding as an offering. We wanted to try it but we felt bad for eating the offering; luckily one guy wanted a picture with us so after he took it I asked what was he carrying ( I knew it was the offering, just wanted him to explain what it was), he gave us a piece to try and it was delicious!

Anyone can volunteer in the kitchen to prepare daily meals, these meals are given for free to anyone, regardless of race, religion, gender, etc.. This is used by a lot of homeless people every day to help keep them fed. Go Sikh!! 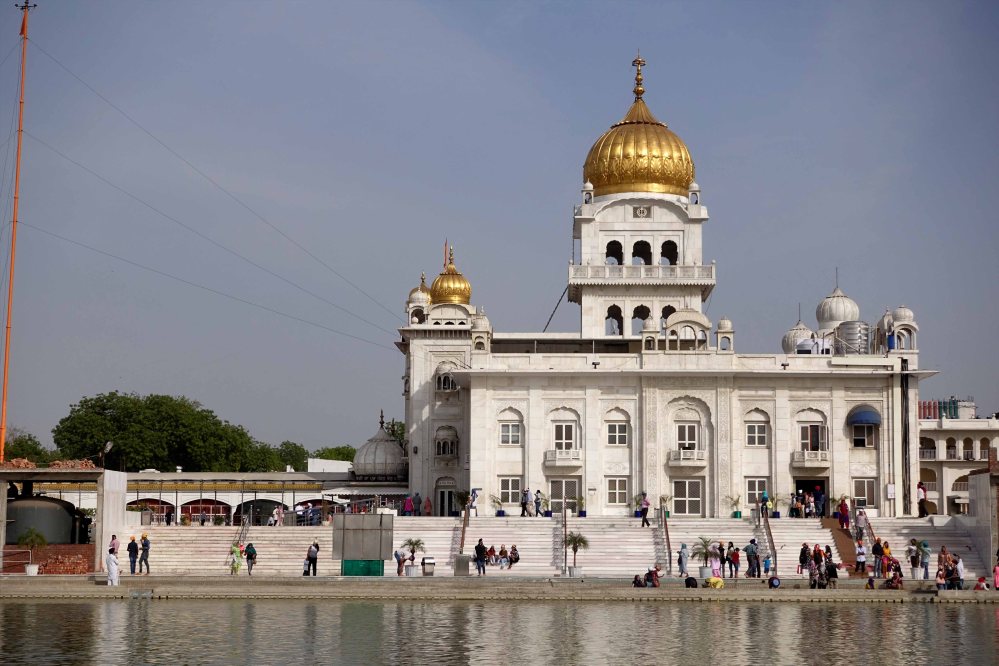 I’m no expert on Sikh religion but we tried to learn as much as we could during our visit, they have a nice museum where they explain the history of the religion and what their beliefs are. Overall very down to earth descriptions with a few magical explanations here and there, I guess it cannot be a religion unless they put some fantasy in their history.

After our spiritual experience, we were very hungry so we looked for the best budget Indian restaurant around there, our driver was happy to take us (surprising because they always try to push you to go to the places they get commission). The restaurant serves South Indian food (less curries, more solid) and the meal was incredibly tasty, we got a Dosai which is this fried rice pudding made flat and fried (like a crepe). It is surrounded by several colorful diarrheas, one coconut, one mint, one chili and one lentil. I’m starting to change my opinion on Indian foods… believe it or not. 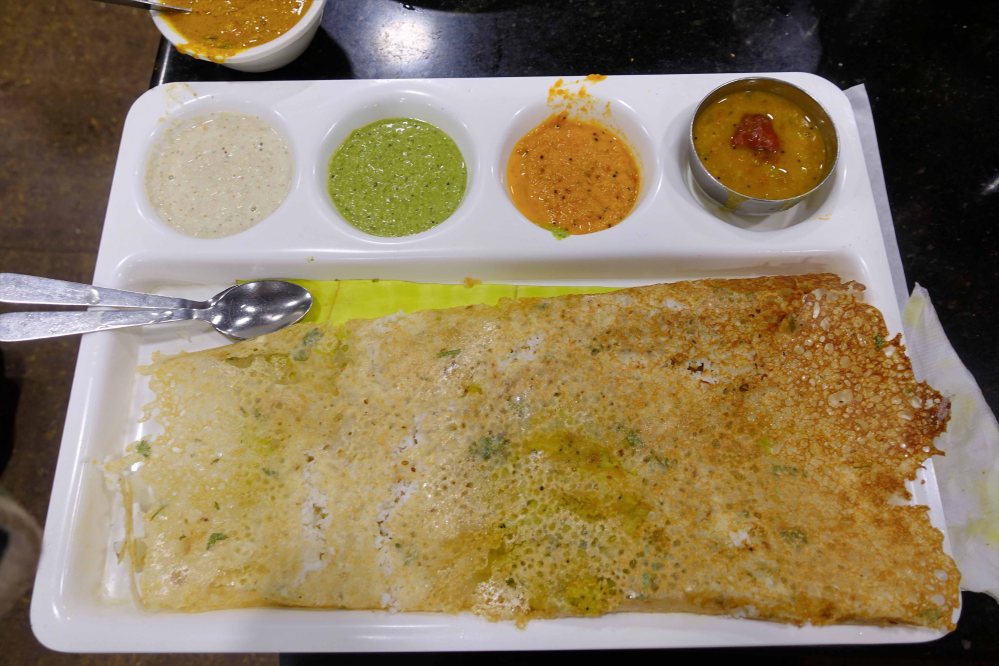 When we got back to our hotel we told the nice guy who has been booking the drivers for us, that this one was awesome; he said he threatened him so he does not take us to any shopping, or commission restaurant or try to sell us his own services. The poor driver was so scared he didn’t even talk to us and we loved it! Maybe they all have to be threatened before they take us.

Bonus Pic of The Day: When visiting most sites in Delhi you have to remove your shoes. You have to options, you either place them in the free lockers under your own risk, or you pay to have someone look after them. You can clearly see that people don’t trust each other here (or they did and the shoes were stolen). 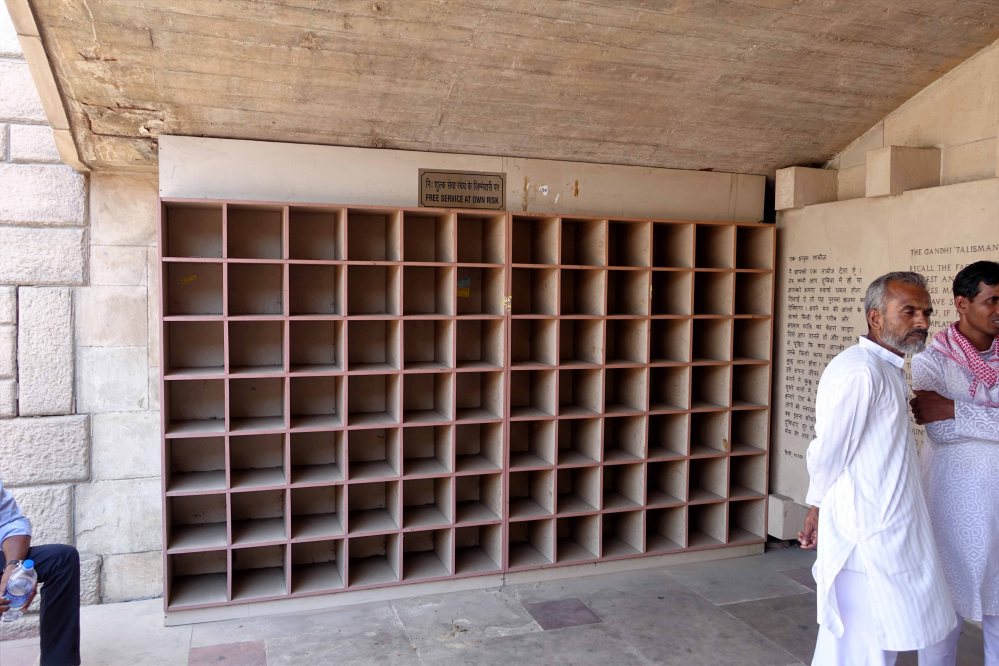 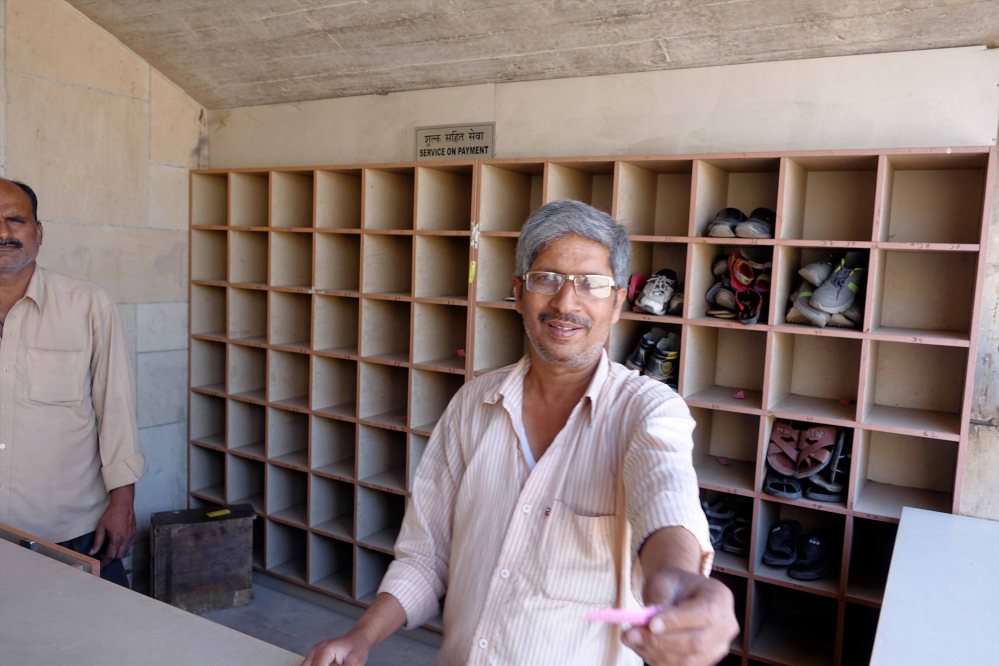