Second day in Delhi and still alive! that is good news. We are getting a little more confident here but still decided to get another driver for the day. Our first stop was Akshardham Complex,  a Hindu mandir (temple), and a spiritual-cultural campus in Delhi. Surrounding the temple they built some theme park looking attractions like “It’s a small world” but for Hindu culture, an IMAX screen with a Bollywood film and other exhibitions.

The security of this place makes the TSA look like kindergarden kids. You are not allowed to bring absolutely anything, no camera, no water, no bags, no tacos, no anything. After your genitals have been groped for several seconds by 2 Indian men, you are inside. This is all because in 2002 there was a terrorist attack in another Akshardham temple that killed 33 people. For this reason, the next couple pics are from google images, just to show you the beauty of this temple.

On our way to the famous Bahai Lotus Temple we drove thought pretty rough neighborhoods. Narendra Modi (the charismatic prime minister) has implemented social programs to clean the streets, you can see commercials of actors and even himself picking up trash from the streets in an effort to educate the people to keep their streets clean. As you can see here, those programs have been very effective.

There are other areas that are a little cleaner, they look more like mexico city. And this picture doesn’t even capture the dirtiest we have seen at all! 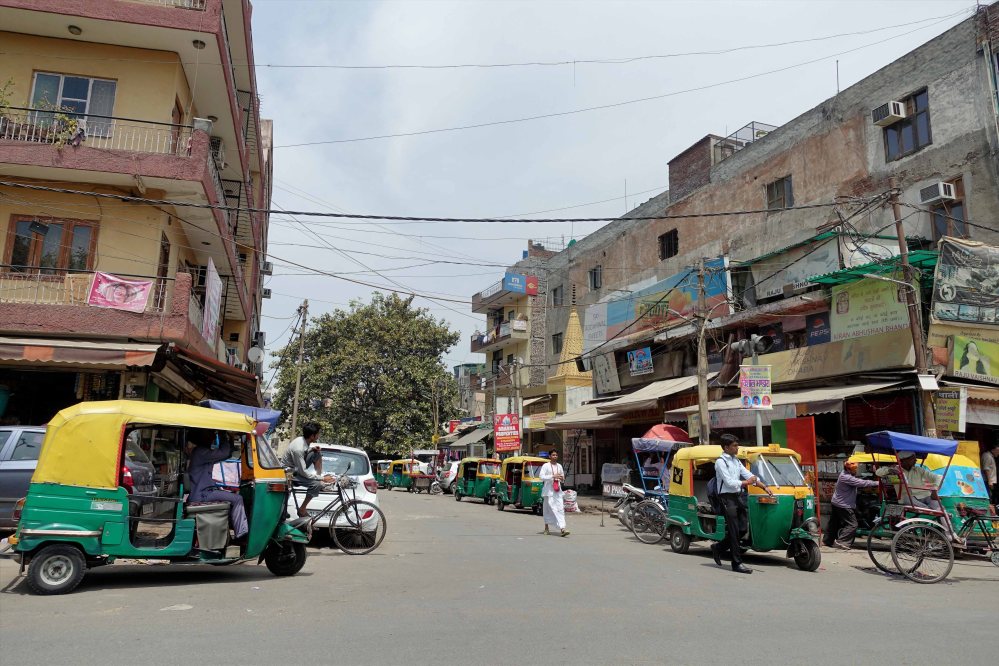 We arrived to the temple, I always was curious to see this temple as the Baha’i religion is so distant. I have been to the Baha’i gardens in Haifa, Israel but there is no explanation of the religion or anything there.

The Lotus Temple has won numerous architectural awards and been featured in hundreds of newspaper and magazine articles. Like all Bahá’í Houses of Worship, the Lotus Temple is open to all, regardless of religion or any other qualification.The Bahá’í laws emphasize that the spirit of the House of Worship be that it is a gathering place where people of all religions may worship God without denominational restrictions.

By the way, this is the most visited building in India, surpassing even the Taj Mahal with some 4.5 million visitors a year. 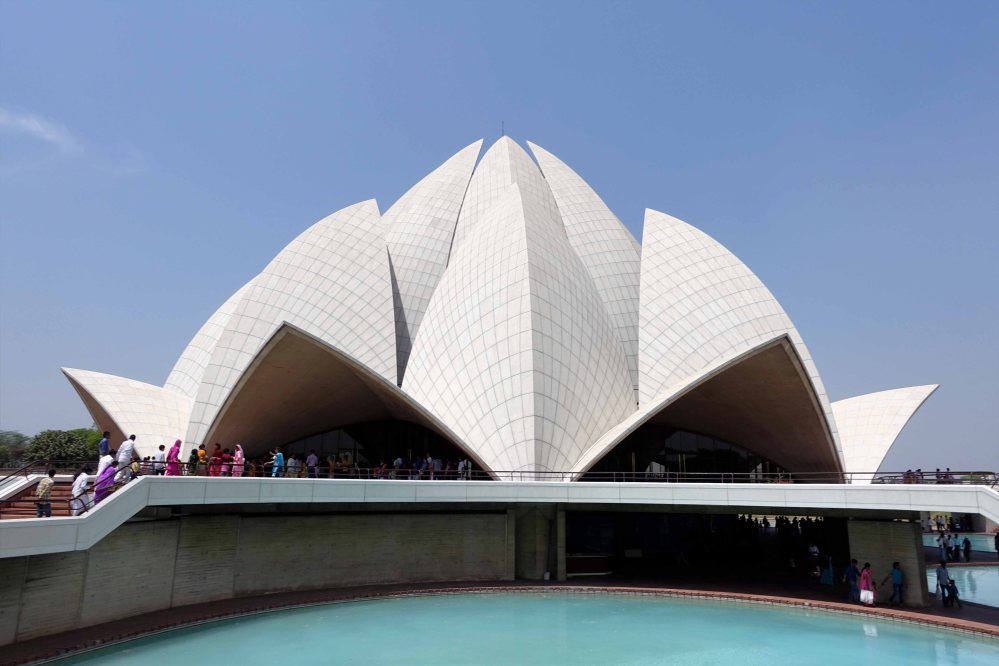 All Bahá’í Houses of Worship, including the Lotus Temple, share certain architectural elements, some of which are specified by Bahá’í scripture. Abdu’l-Bahá, the son of the founder of the religion, stipulated that an essential architectural character of a House of Worship is a nine-sided circular shape. While all current Bahá’í Houses of Worship have a dome, this is not regarded as an essential part of their architecture. Bahá’í scripture also states that no pictures, statues or images be displayed within the House of Worship and no pulpits or altars be incorporated as an architectural feature (readers may stand behind simple portable lecture stands).

Before going inside, they just ask you to keep silent and pray, no need to disclose your religion or anything. This is a place that brings everybody together. The temple didn’t have an altar or anything, just benches. It is kind of underwhelming on the inside considering how incredible the architecture is on the outside.

We then went to eat at a fancier place on top of a tourist trap mall. The food was absolutely delicious, specifically the pickles vegetables and the mint sauce they served on the side. We got two diarrhea’s, one chicken tikka masala red diarrhea and one spicy mushroom orange diarrhea. The mushroom dish was supposed to be a Chinese dish of chili mushrooms but they still turned a Chinese dish into diarrhea.  We complemented the meal with a Masala tea. Mega expensive meal but well worth it! Indian food has again proven me wrong.

Our stunning next stop was the impressive Humayun’s Tomb, this guy was a Mughal emperor who ruled over territory in what is now Afghanistan, Pakistan, and parts of northern India from 1531–1540 and again from 1555–1556. . It was designed by a Persian architect and it created a precedent for future Mughal architecture of royal mausolea, which reached its zenith with the Taj Mahal, at Agra.

Inside the monument is pretty simple, his ashes are buried here. The symmetrical and simple design on the exterior is in sharp contrast with the complex interior floor plan,full of inner chambers.

There are several other tombs and mosques inside the complex. 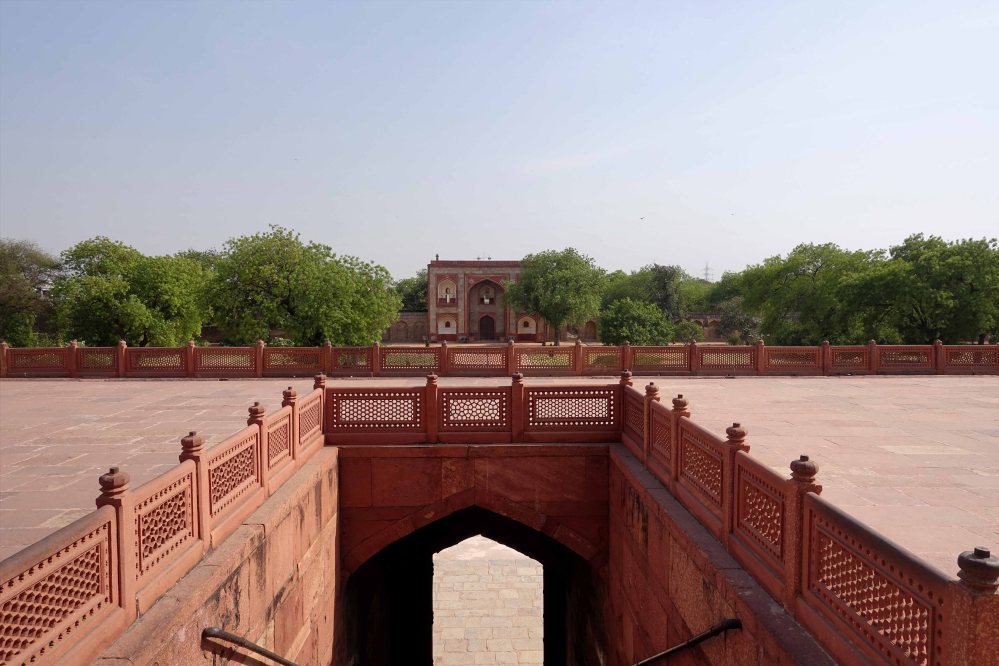 During the Partition of India, in August 1947 the Purana Qila together with Humayun’s Tomb, became major refugee camps for Muslims migrating to the newly founded Pakistan, and was later managed by the government of India. These camps stayed open for about five years, and caused considerable damage not only to the extensive gardens, but also to the water channels and the principle structures. The restoration of the complex started around 1993, when the monument was declared a World Heritage Site.

Once returning to our hotel we had no desire to try and navigate the city for dinner so we decided to walk down the street to a nicer hotel that had a restaurant.  We thought this would be a quick and easy walk but we still managed to encounter a parade (at 9:30pm).  Today is some sort of holiday.  One of the people in the parade gave us some nuts to eat (which we did not eat).  Literally every step you take in India can be filled with surprises.  `At the restaurant we asked what they were celebrating and the waiter didn’t even know, hence why we have no idea.

Bonus Pic of The Day:

The Anatomy of the typical Indian Toilet, I will divide this explanation in four categories: