The ride was sooooo comfortable we want to do it again so we can sleep and relax while watching the locals fishing. Everybody got a beach chair in the open deck, breakfast and a delicious lunch. The service was spectacular and the view incredible. 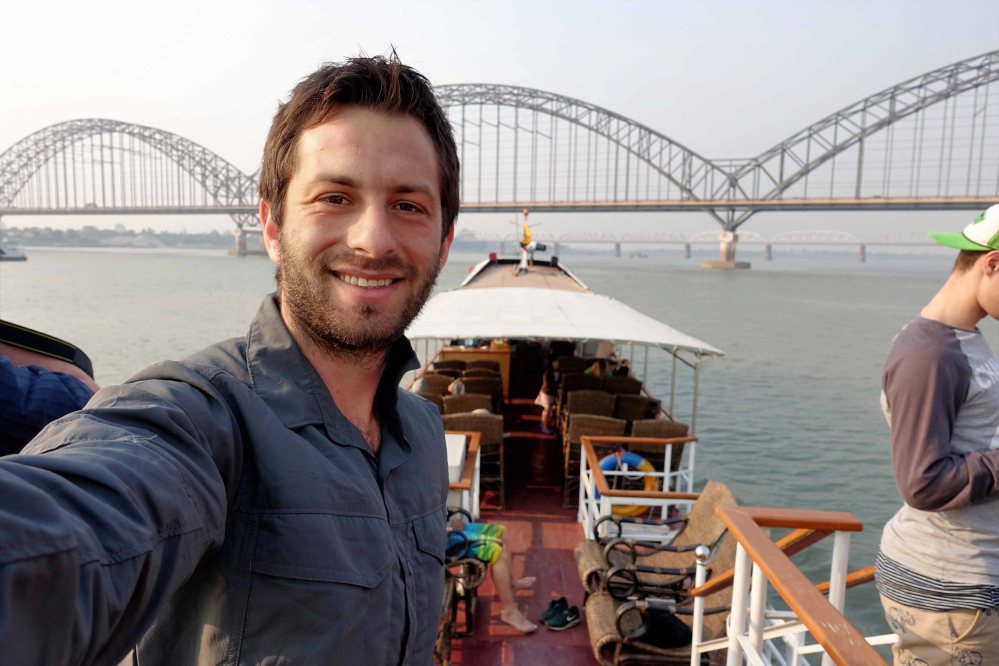 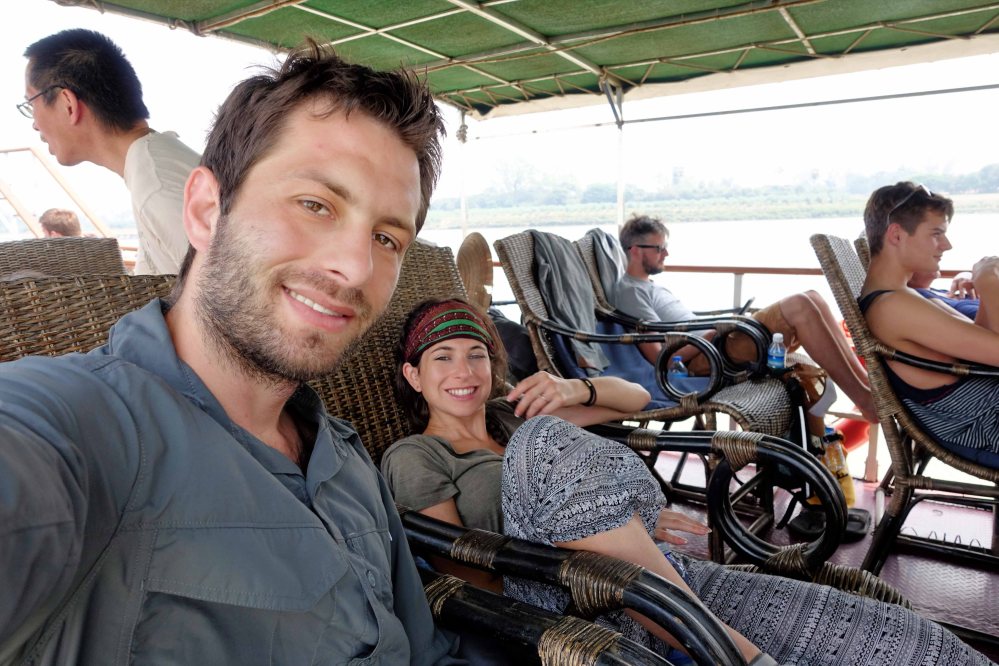 We navigated next to villages, temples, bridges and fish boats! Myanmar is an incredible place were you can see more temples than houses everywhere.

We were received in Bagan by the locals and an improvised bridge.

We reached Bagan around 5:30 pm. We took a very run down horse and carriage to our hostel and entered what may be one of the must undeveloped cities we have ever stayed in. Bagan is divided in Old Bagan, New Bagan and the city of Nyaung where all the hostels and backpacker places are located; we stayed in that area. We truly felt we entered another lifestyle being here.  We made a very smart decision of choosing to spend 8 dollars more a night to upgrade our room to a private bathroom because a private bathroom would become very important for Eitan later today. We walked around the town and there is a strip of restaurants for the tourists and the rest is all local living. We stopped and had some Myanmar beer at a hotel restaurant and Eitan began to really not feel so great. Then the real fun began for Eitan where he puked like the exorcist all over the place, food poisoning is no joke. We literally ate exactly the same thing the only difference was Eitan drank the tea on the ferry and Sarah didn’t (smart Sarah).  So we think the tea likely did it.

But being sick didn’t stop Eitan, we still woke up at 5am to go see a sunrise.  He wasn’t feeling good still but to a temple we went. We rented an E-bike to get around Bagan which was a great decision as it gives you so much flexibility of where to go.  It was pitch black so it took us about an hour to find the temple we wanted, after asking a million locals, we finally reached it! 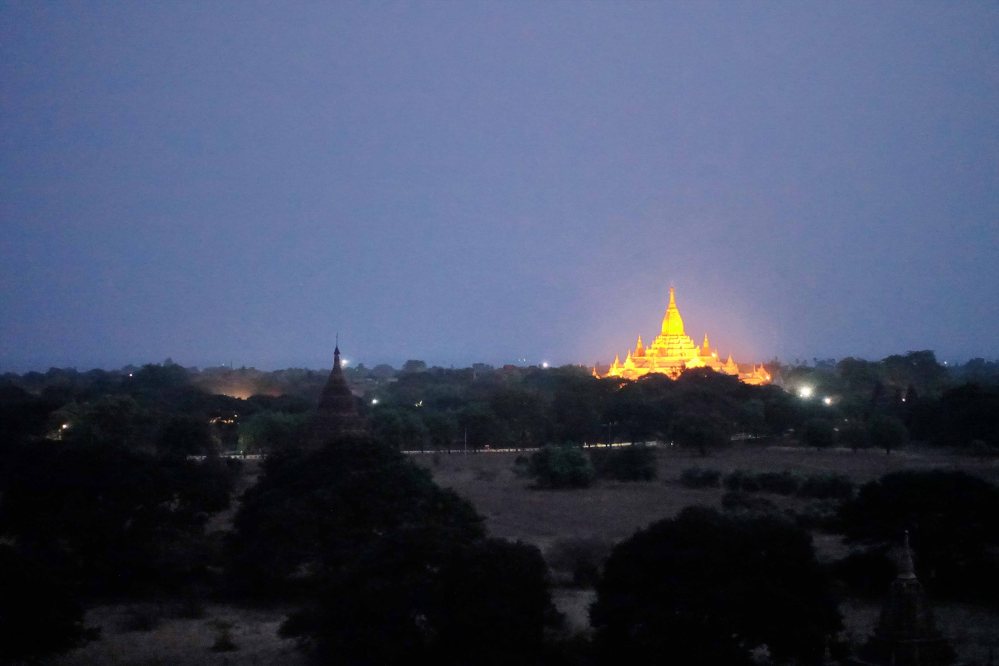 We climbed to the top of the Shwe-San-Daw pagoda and joined many other tourists awaiting a beautiful sunrise.  From the 9th to 13th centuries, the city was the capital of the Kingdom of Pagan, the first kingdom to unify the regions that would later constitute modern Myanmar. During the kingdom’s height between the 11th and 13th centuries, over 10,000 Buddhist temples, pagodas and monasteries were constructed in the Bagan plains alone, of which the remains of over 2200 temples and pagodas still survive to the present day. 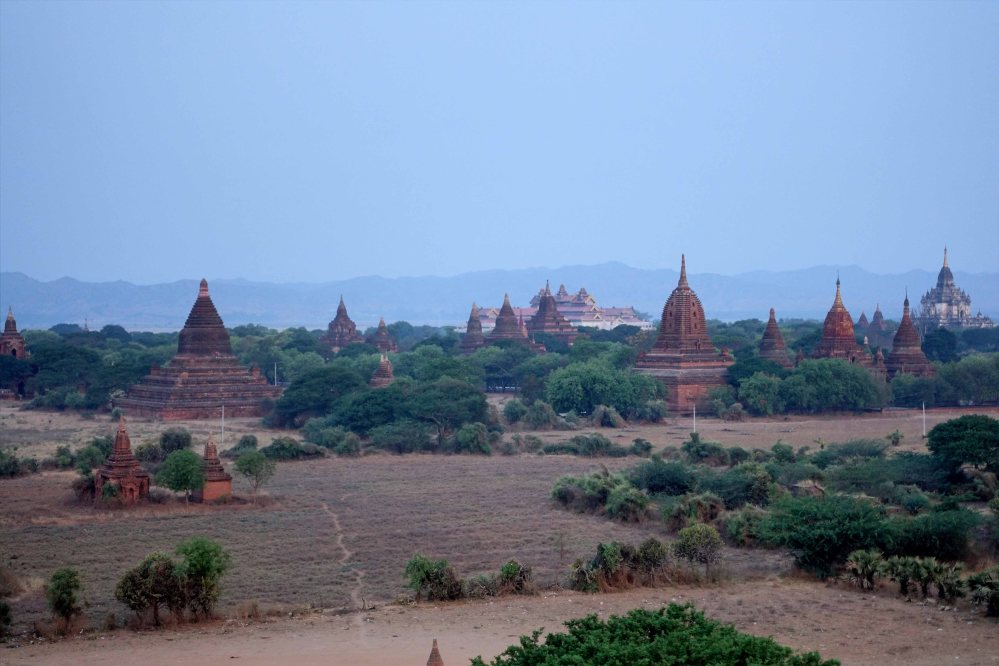 This sunrise was a bit disappointing and Eitan was about to pass out from dehydration so we climbed down to discover we had a flat tire on our e-bike.  These cute little Myanmar kids noticed the flat tire and helped us call our hotel to have someone come.  Of course these kids also wanted to sell us some postcards like many of the kids here but we opted to just give them a tip instead of buying postcards.  The flat tire was a message from the gods! while we waited for the guys to fix it, we climbed back up to see one of the most stunning sights. The sun was hidden behind a layer of clouds before, but this was after the sun appeared!

Our hotel brought us a new bike and back to the hotel we went for breakfast and a nap. We then went temple hopping.  Some of the temples we went to have beautiful interiors with Buddhas, thousands of years old wall paintings and many locals praying. 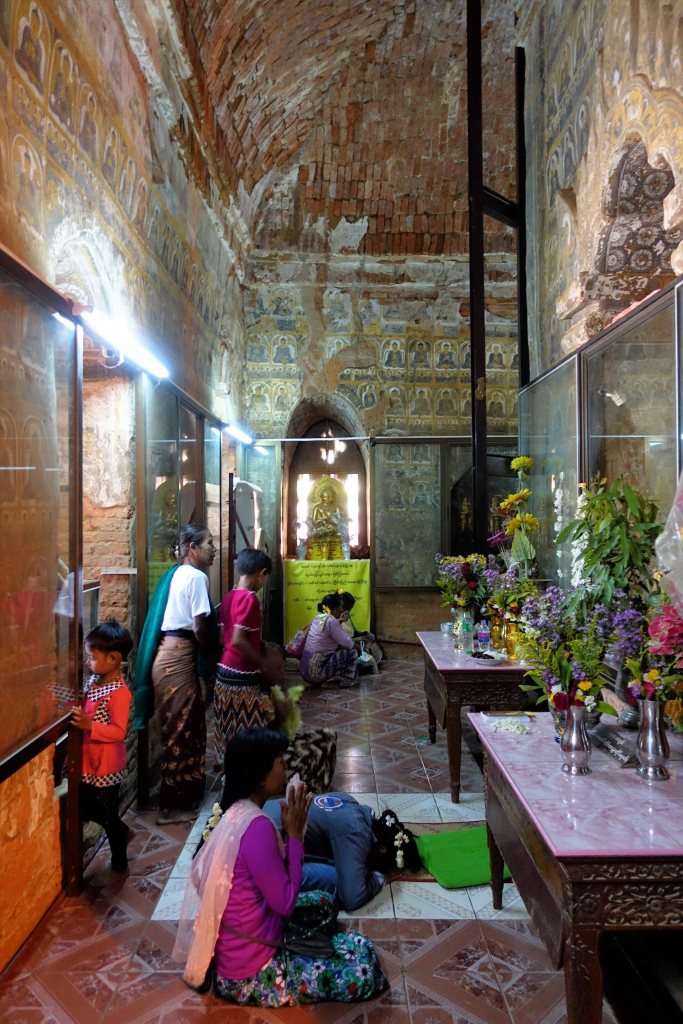 The one VERY annoying thing is you need to take off your shoes when getting close to the temple which means walking on extremely hot pavement and your feet getting disgustingly dirty. 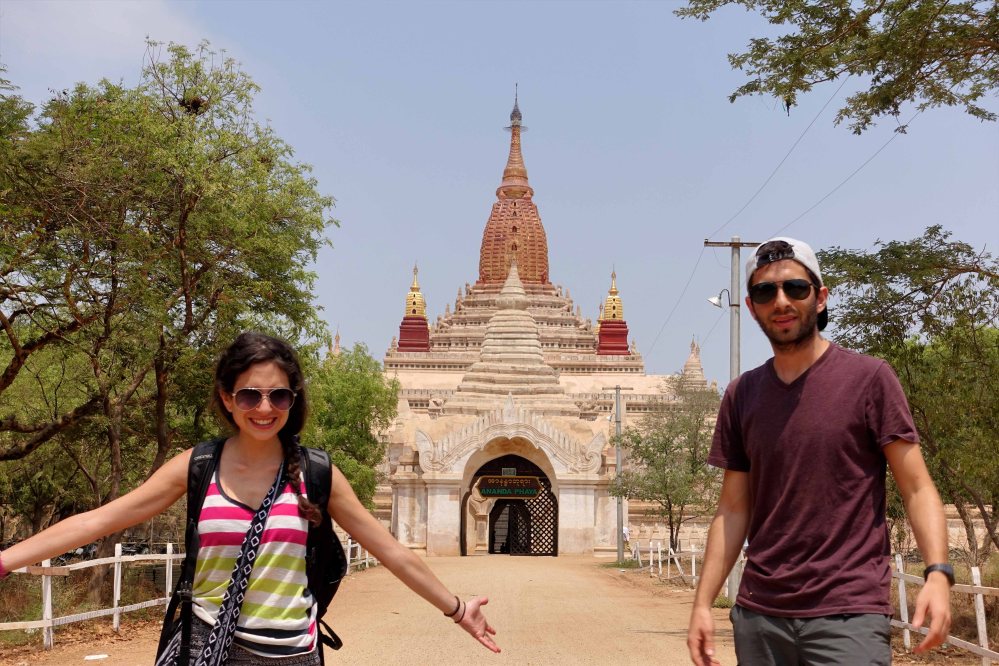 For those who don’t want to rent an e-bike, you can hire a horse cart for about $20 a day. Puke inducing for sure as the roads are as good as you expect them to be.

In one of the temples we bought a piece of gold leaf that you can put on any body part of Buddha. We chose the knees as it means “good travels”. Other options include the stomach to cure the explosive diarrhea and the head to cure stupidity. 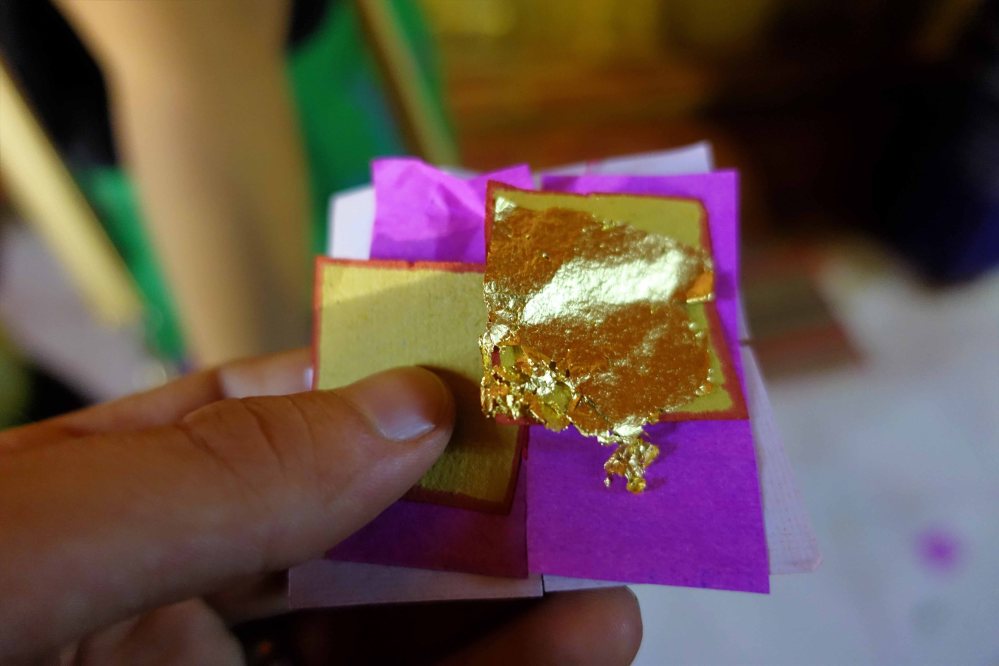 After visiting about 5 beautiful temples we were templed out and used the e-bike to explore the New Bagan area. The New Bagan area still looks very old.  We saw a sign for a restaurant that Sarah remembered seeing on trip advisor so we followed the signs to a very remote location but it had many tour buses so we had a feeling it would be a safe place to eat. They sing and parade your food like if it is royal food.

The restaurant was on the river and quite nice but our experience with Myanmar food wasn’t as great this time.  It was relatively speaking more pricey and weird.  We each ordered a mustard leaf soup as an appetizer and the soup was literally a massive bowl of broth with a couple leaves.

Eitan still wasn’t feeling so great so I guess its good to eat if you are sick?..   We found the one store in all of Bagan that somewhat resembled a small 7-11, all the rest of the markets are small, run down with mostly items we don’t recognize.  We bought some snacks and napped again.  After our second nap of the day Eitan was feeling human again and we went to our final little temple of the day to see the sunset.

Driving to this temple was a bit of an adventure as we drove on some sandy road and it was a bumpy yet fun ride.  Watching the sunset in the cooler weather and seeing the temples sprawled out throughout the city was beautiful.  It truly is spectacular and unlike anything we have ever seen.

We decided to opt for not Myanmar food for dinner and went to an Italian place managed by Italians with an Italian chef.  Smart decision as it was delicious authentic Italian food and something trustworthy for Eitan’s stomach! Next to the restaurant was this little umbrella shop, we bought a blue one as a souvenir!

Tomorrow we will continue our adventure in Bagan with guess what? you got it! more temples! yeeey!

Bonus Pic Of The Day: Thanaka is a yellowish-white cosmetic paste made from ground bark. It is a distinctive feature of the culture of Myanmar, seen commonly applied to the face and sometimes the arms of women and girls, and is used to a lesser extent also by men and boys. It is used as sunscreen and the Thanaka stands are everywhere: 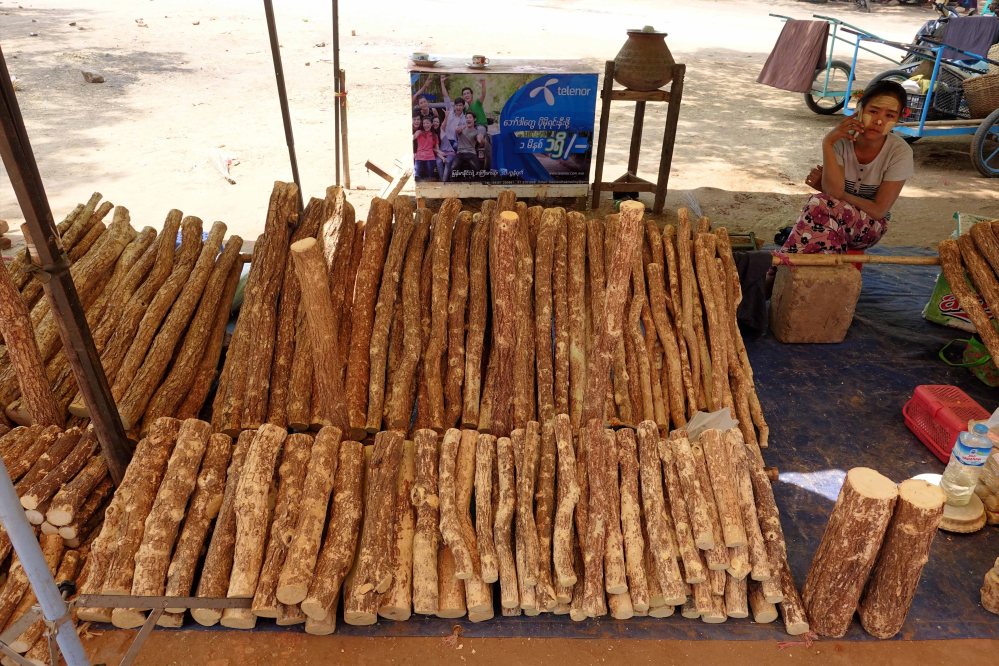