After arriving to Puno’s bus station, our guide picked us up and transported us to the pier where we would be taking the boat to the Uros islands.  By Pier, I mean somewhere in the middle of the road with access to the water  where a boat could dock. There was really nothing else there.

We saw our boat approach and while we were getting on the thunderstorm really took off.  We started our 30 min ride on lake Titicaca and the lightning was getting closer and closer and we were getting nervous. The following conversation happened next:

Boat captain: (all in Spanish) Hey, you should tell your friends to turn off their phones.

Eitan: Why is that? is the light not letting you see the way?

Boat captain: Naah, I can see well but the phones attract lightning and we will all get electrocuted. Also tell them to get away from metal.

Eitan: Isn’t the boat made out of mostly metal (and fiberglass). The lightning rod should be enough to protect us.

Boat captain: Yeah, about that….. we don’t have a lightning rod installed in the boat.

Eitan: Fuck! we are totally going to die now.

Eitan to friend: Hey guys, lets just power off your phones for a little bit Ok? thank you! 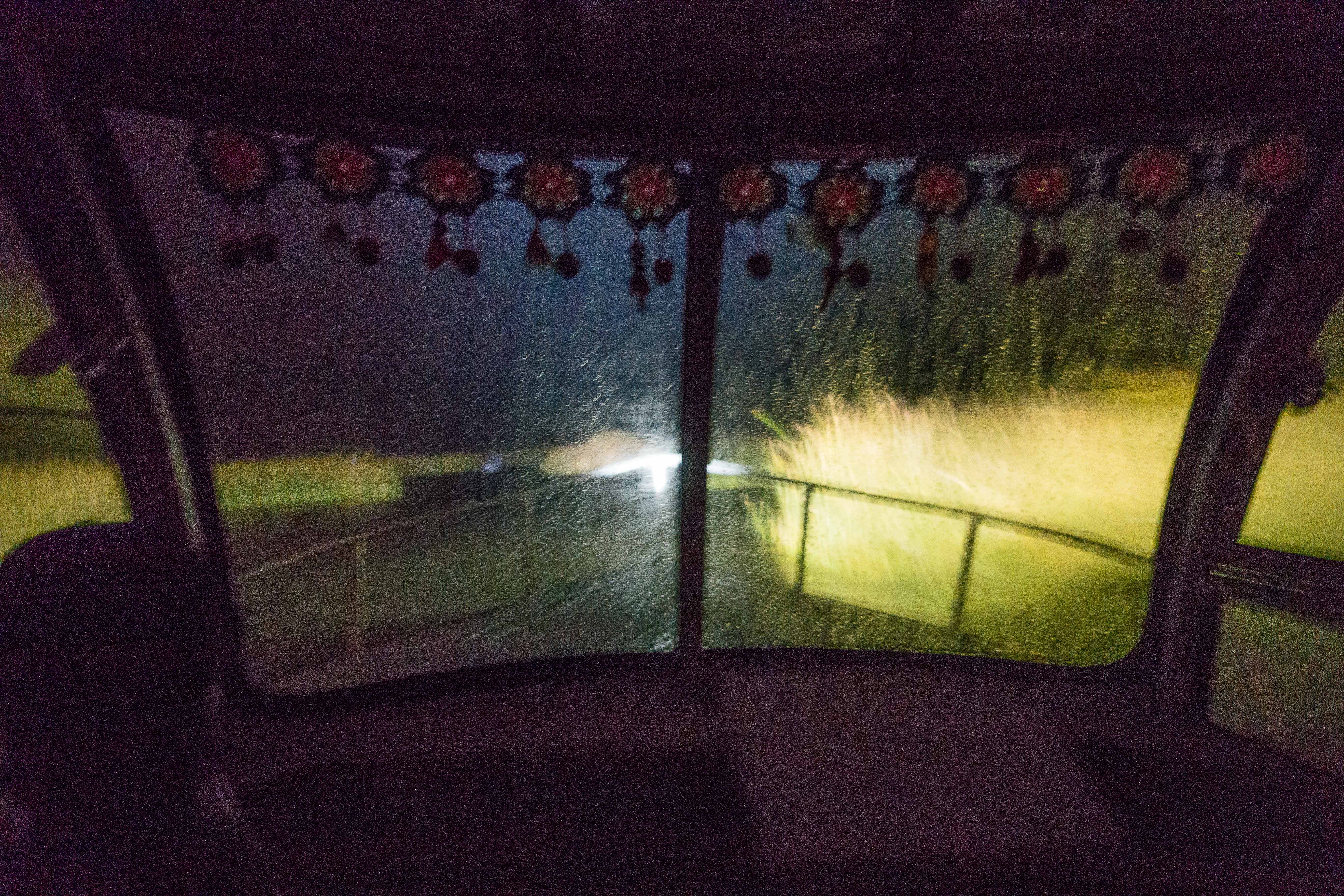 Somehow we made it in one piece to the island! Our host welcomed us and showed us our rooms for the night!

The rooms are on top of the floating island and are built by the host family. The rooms even had a toilet!!!

Before the Inca invaded the region around the lake, the Uros lived on the shore in conventional towns and villages. However, while other groups either bent the knee to the Inca conquerors or fled deeper into Bolivia, the Uros came up with a very novel solution: let the Inca have the shore, and live on the lake itself. They constructed huge mats of the local totora reeds (which they also use to create nearly everything else the use), and set sail on the world’s highest navigable lake. The Uros remained isolated in the center of the lake and largely overlooked by the Spanish and later the Peruvian and Bolivian governments, until a large storm in 1986 forced them closer to the shore to repair and get help. Since then, many Uros have left the floating islands to join mainstream society, but a large number have preserved their traditional way of life on the islands.

In a parallel universe where I live around Inka and Uru people, I would be a giant.  Sarah just felt welcomed around people of her same height.

The next morning Thomas and I woke up early to see the sunrise, but unfortunately it was a little bit cloudy.

We had some time to explore the island. One family owns and lives here and they have included a watch tower, swings, several rooms and a dining room!

The Uru people use bundles of dried Totora reeds to make reed boats (balsas), and to make the islands themselves. The larger islands house about ten families, while smaller ones, only about thirty meters wide, house only two or three families.

The islets are made of multiple natural layers harvested in Lake Titicaca: The base is made of large pallets of floating Totora roots, which are tied together with ropes and covered in multiple layers of totora reeds. These dense roots that the plants develop and interweave form a natural layer called Khili, which are the main flotation and stability devices of the islands. They are anchored with ropes attached to large Eucalyptus poles driven into the bottom of the lake.

Once the Khili pallets are tied together and anchored, multiple layers of cut reeds are added. The bottom layer of covering reeds rot away fairly quickly, so new reeds are added to the top constantly, about every two weeks to three months depending on weather; this is what makes it exciting for tourists when walking on the islands. This is especially important in the rainy season when the reeds rot much faster. The islands last about thirty years.

We had a lovely traditional breakfast with the other tourists staying there. Our host was the sweetest man but he did not speak any English and barely any Spanish.  The Uru people speak Uchumataqu.

After breakfast we took a boat to do the normal touristy activities. Most tourist come only for the day and they spend the night inland in Puno. We decided to get a more traditional experience by actually staying in one of the islands. The islands sell out months in advance ,so for the travelers who don’t like to plan, I have bad news for you.

Each island has its own boat to transport mostly tourists. Some islands have huge boats that resemble viking dragon boats!

Thomas chilling after boarding the ferry at the tourist trap island! This island is full of souvenir shops, a restaurant and toilets. But it was needed to stop here to get in the ferry that will take us to Taquile Island. 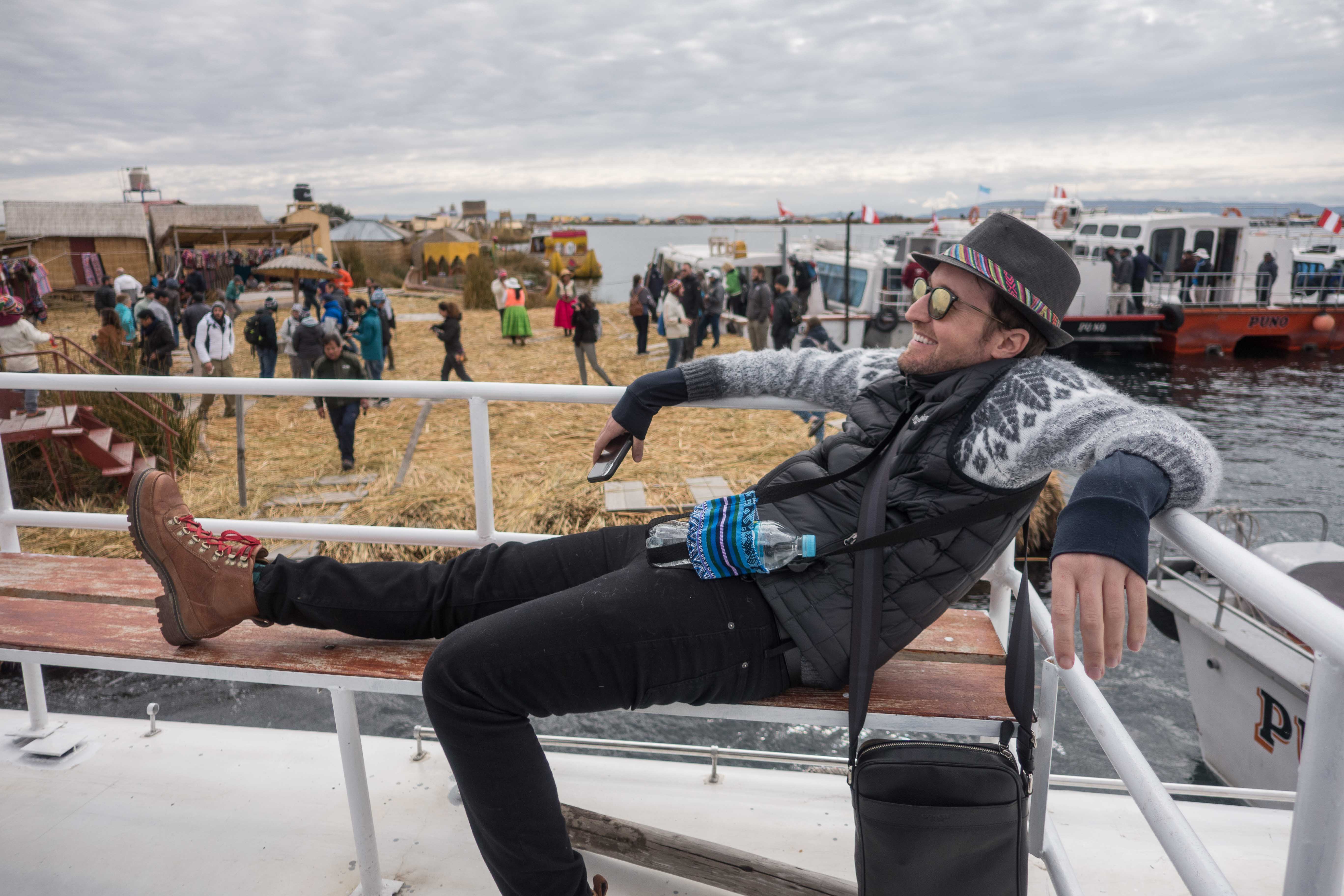 The boat ride takes a couple hours and there is not really much to see. Lake Titicaca is the highest lake in the world and it is 120 miles long and 50 miles wide. It was the center of the Incan civilization, and today straddles the boundary between Peru and Bolivia. 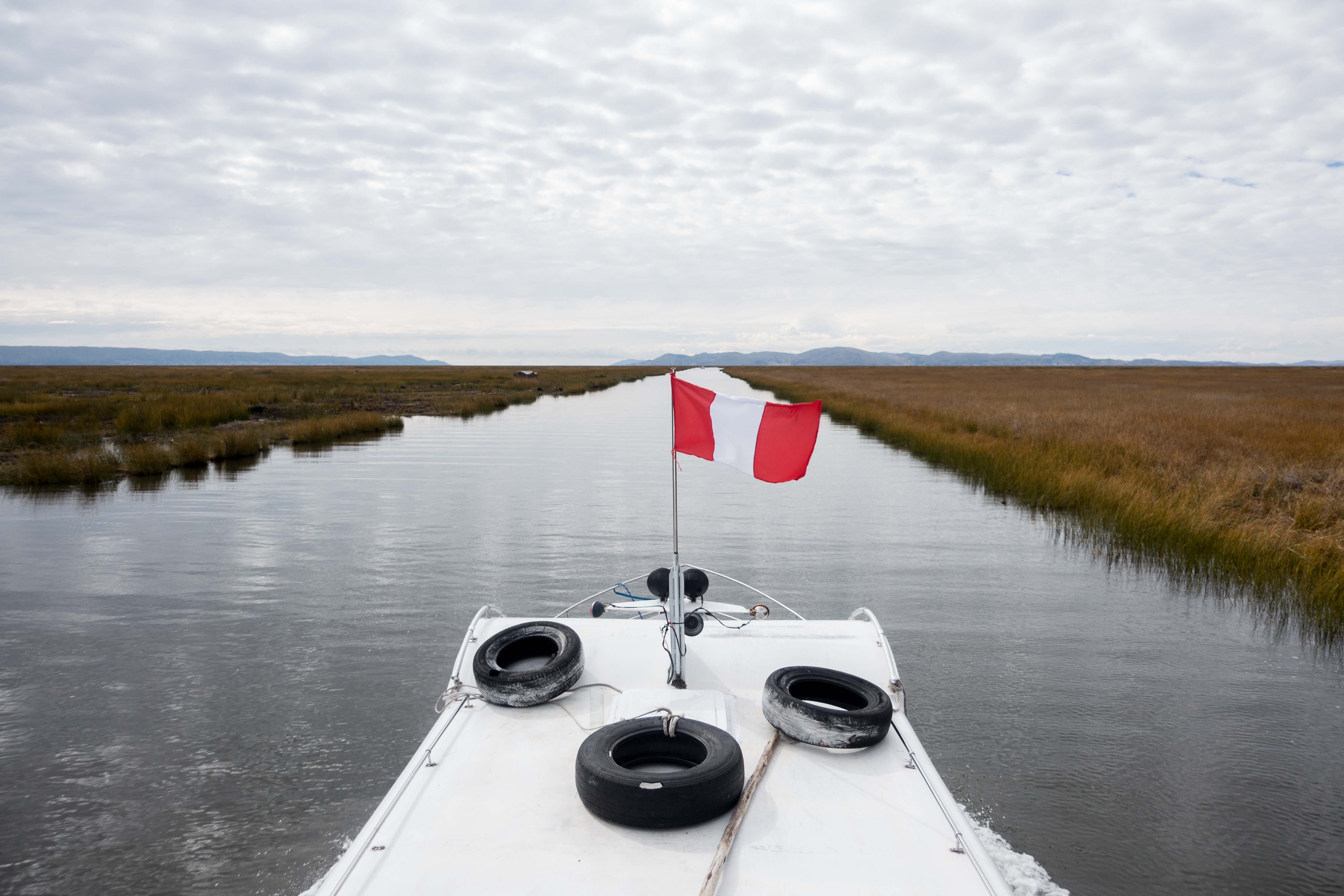 Sarita always overdressed thinking she is traveling in the north pole. 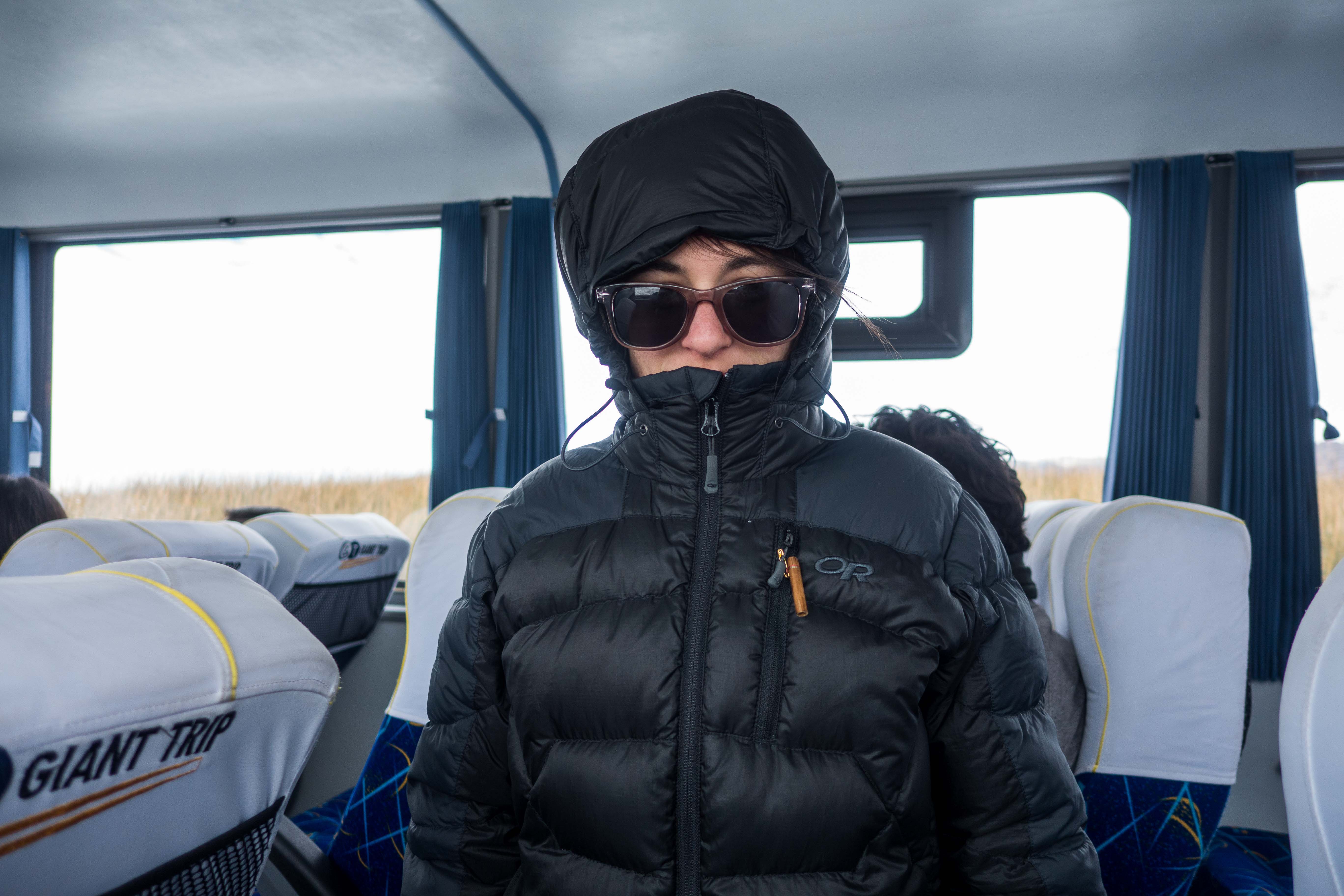 And we finally arrived to the island. 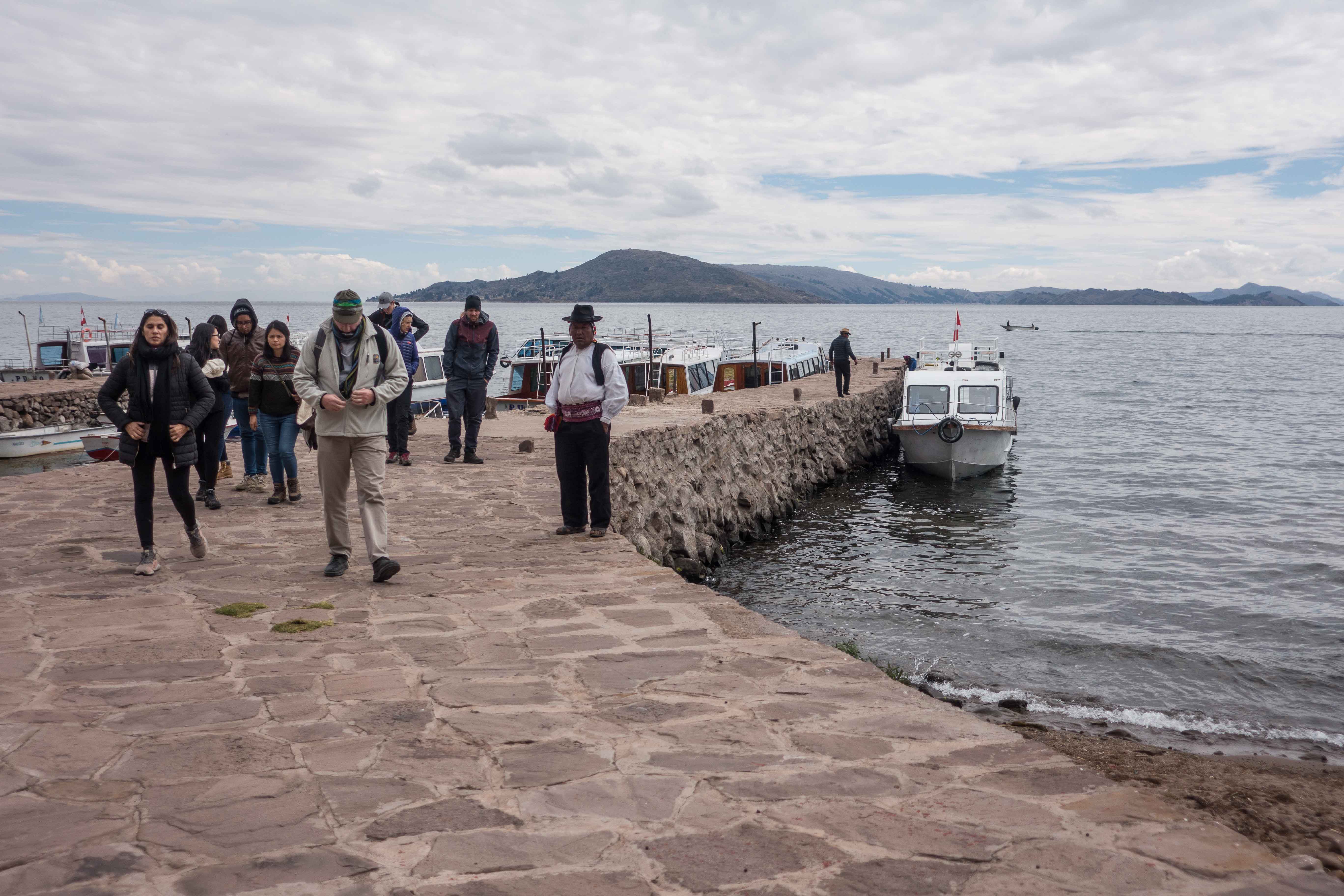 There was a short walk up to the town center. 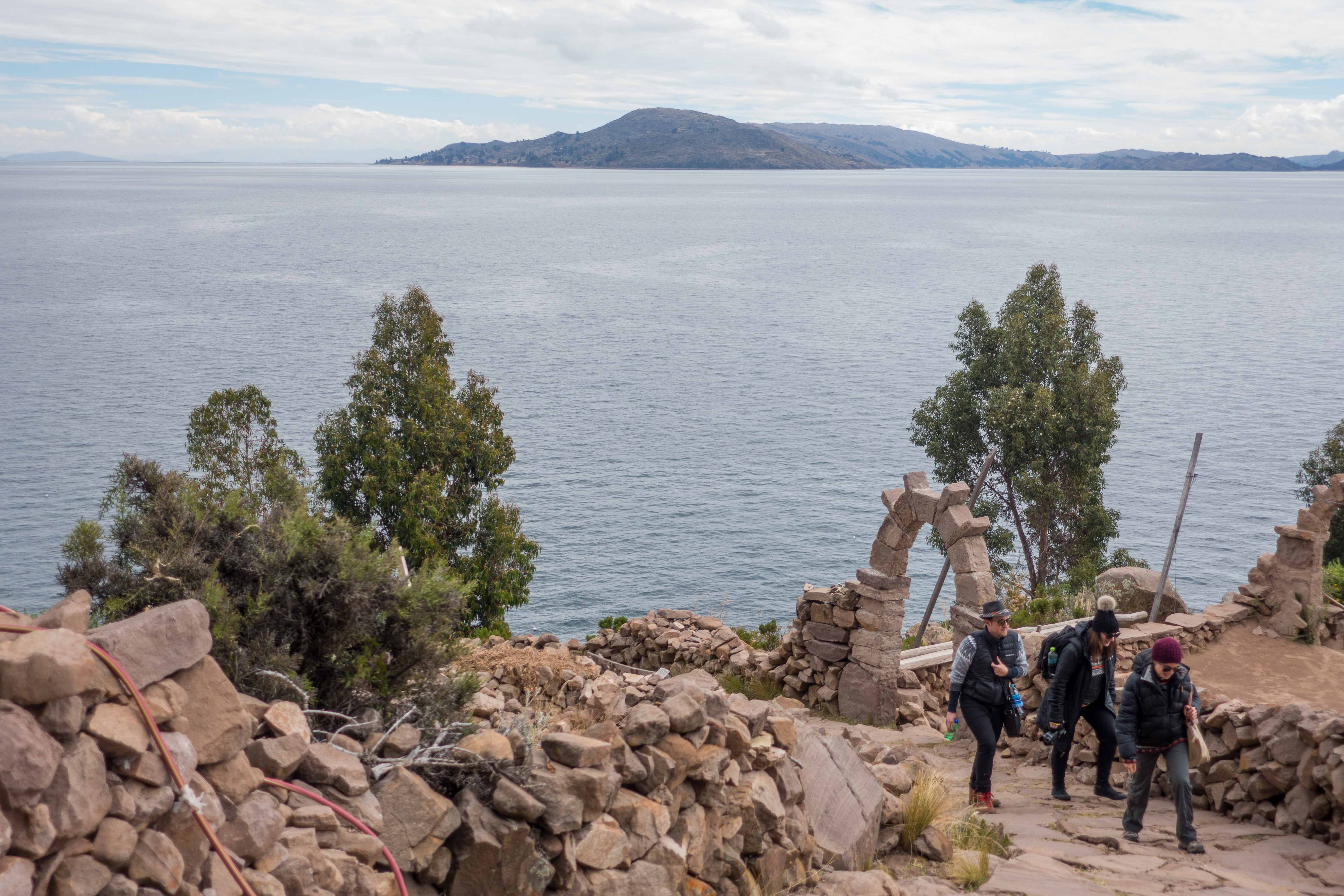 And we arrived at the town center where we had about 1 hour to explore. Unfortunately there is literally nothing to do here. So we spent some time in the handwoven textiles shops.

Taquileños run their society based on community collectivism and on the Inca moral code ama sua, ama llulla, ama qhilla, (Quechua for “do not steal, do not lie, do not be lazy”). 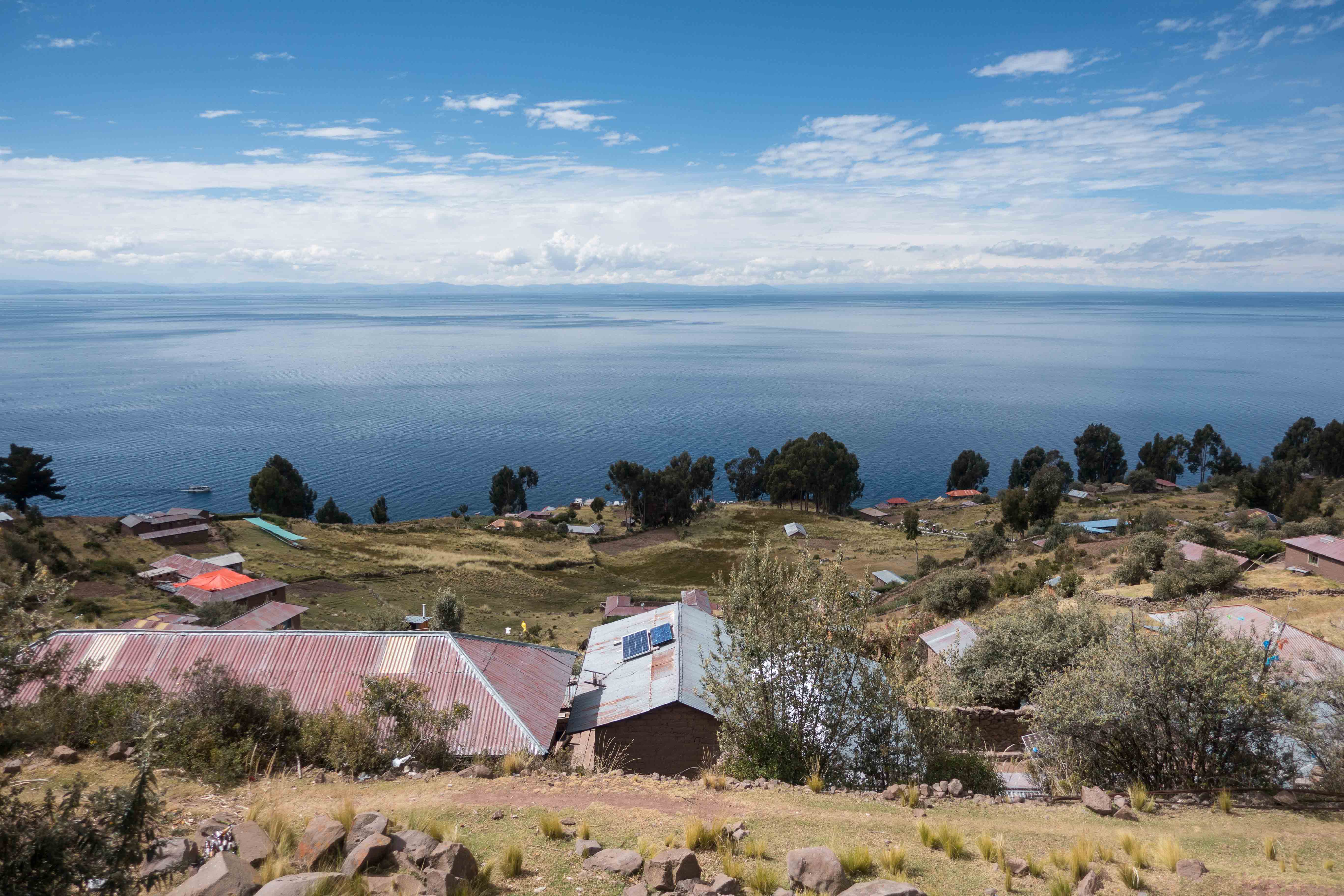 Taquileños are known for their fine handwoven textiles and clothing, which are regarded as among the highest-quality handicrafts in Peru. Knitting is exclusively performed by males, beginning in early boyhood. Women spin wool and use vegetables and minerals to dye the wool to be used by the community. Women are also the weavers of the Chumpis, the wide belts with woven designs worn by everyone in the community of Taquile.

Another view of the island. 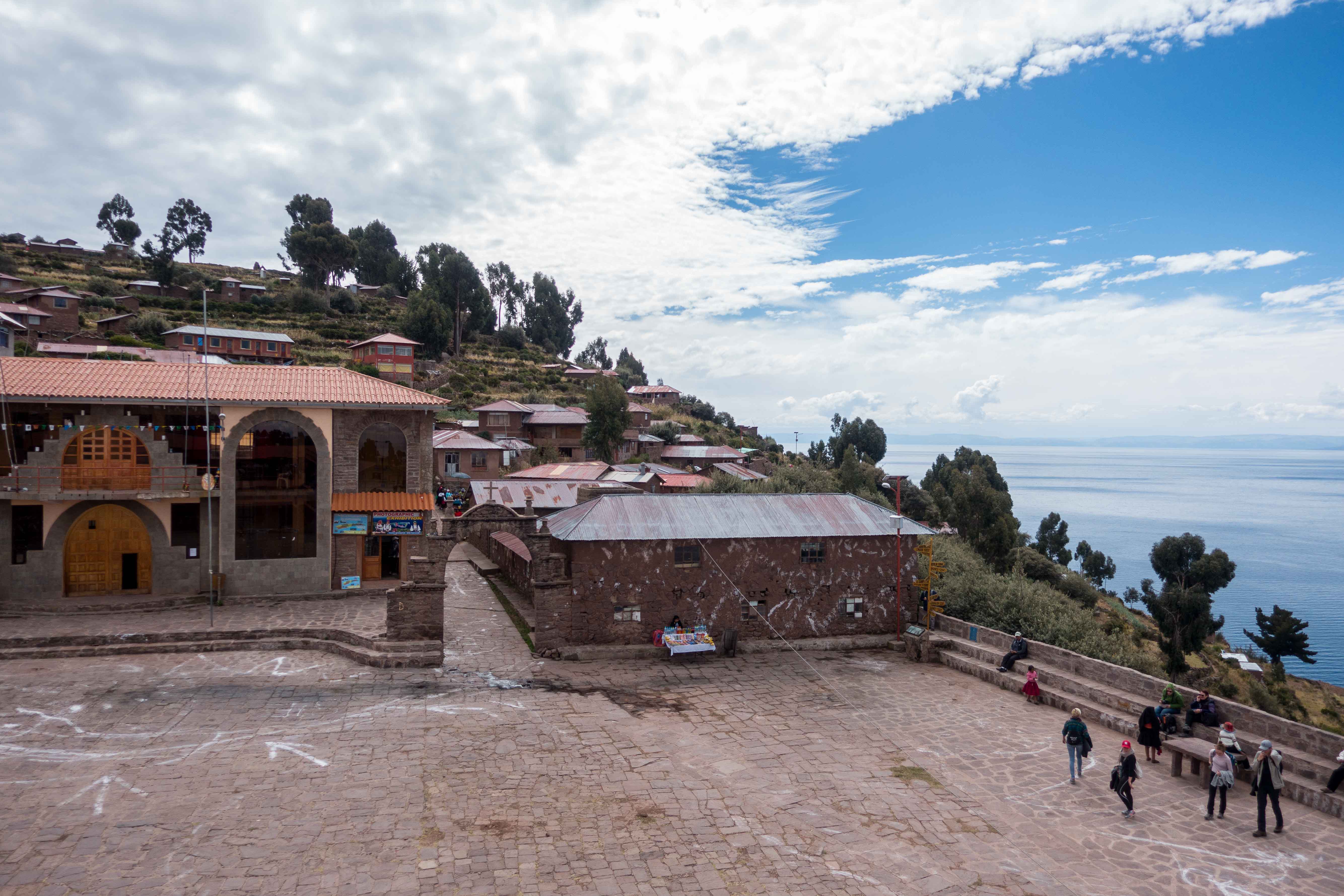 At least we have each other in times of boredom. 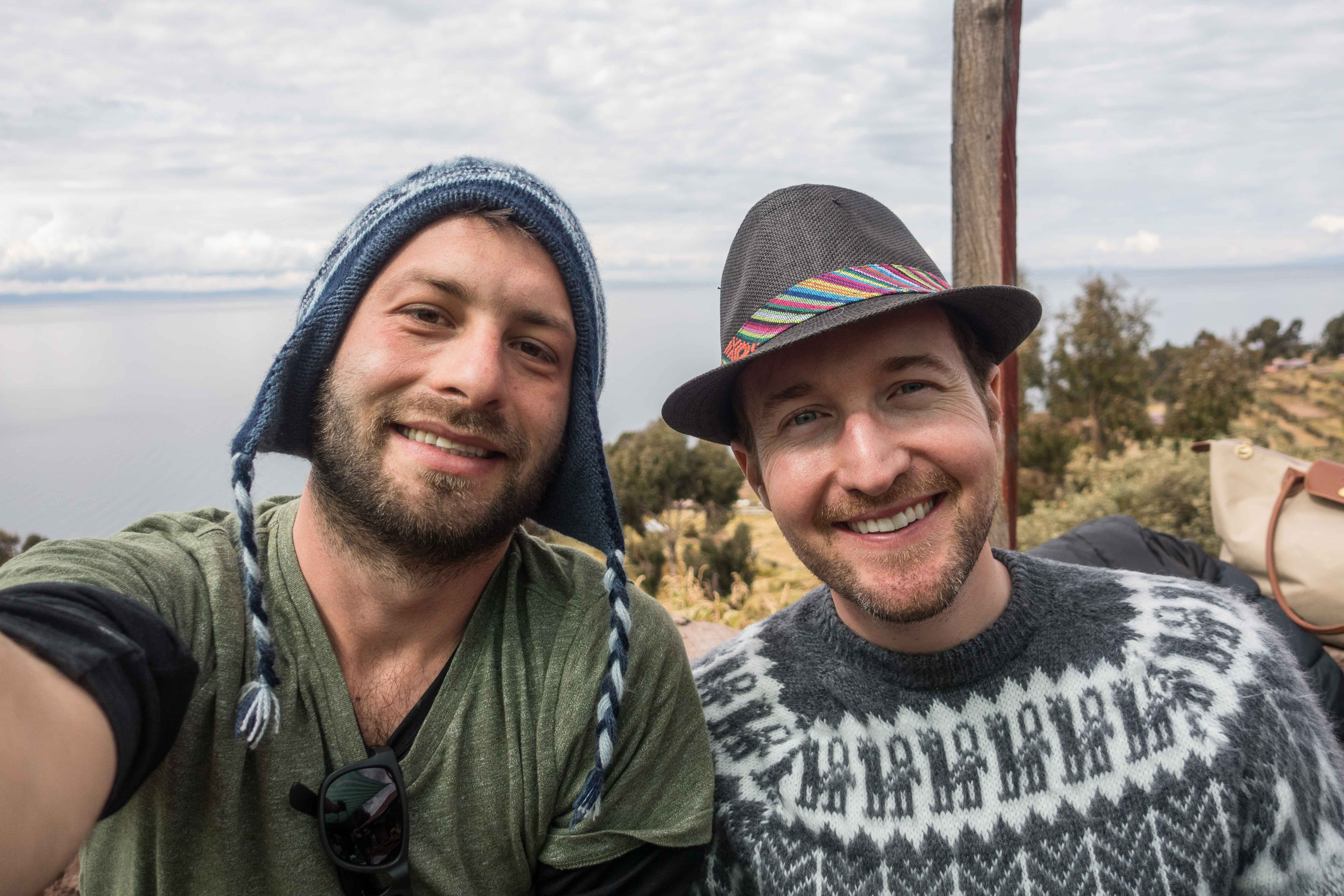 We had a traditional lunch with everyone else on the boat.  The local dish is trout, and it was surprisingly delicious (and we didn’t have diarrhea which is always a plus). 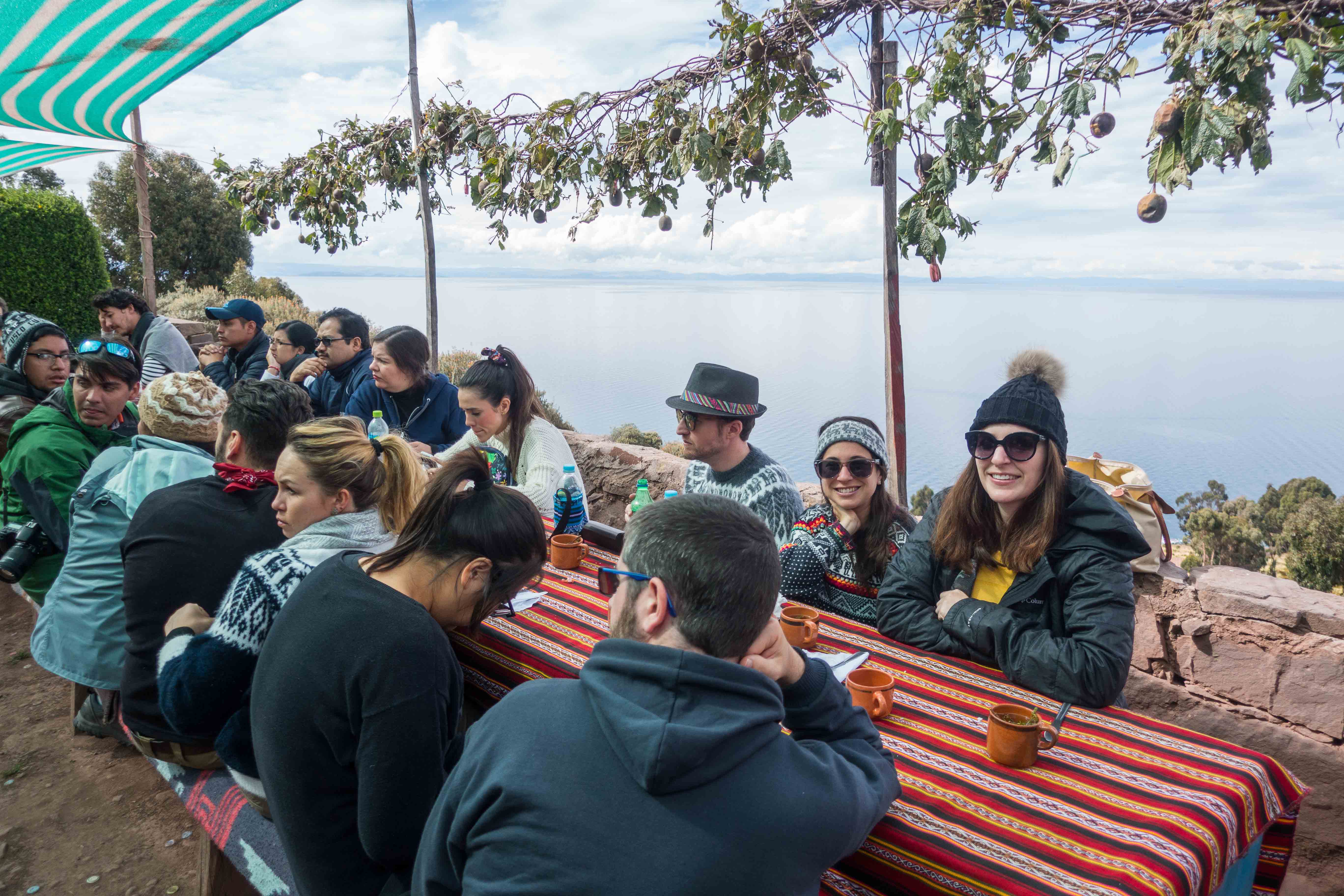 We got some Muña tea, a mint-like herb that has many medicinal properties.

We had a demonstration of how they make soap out of plants!! 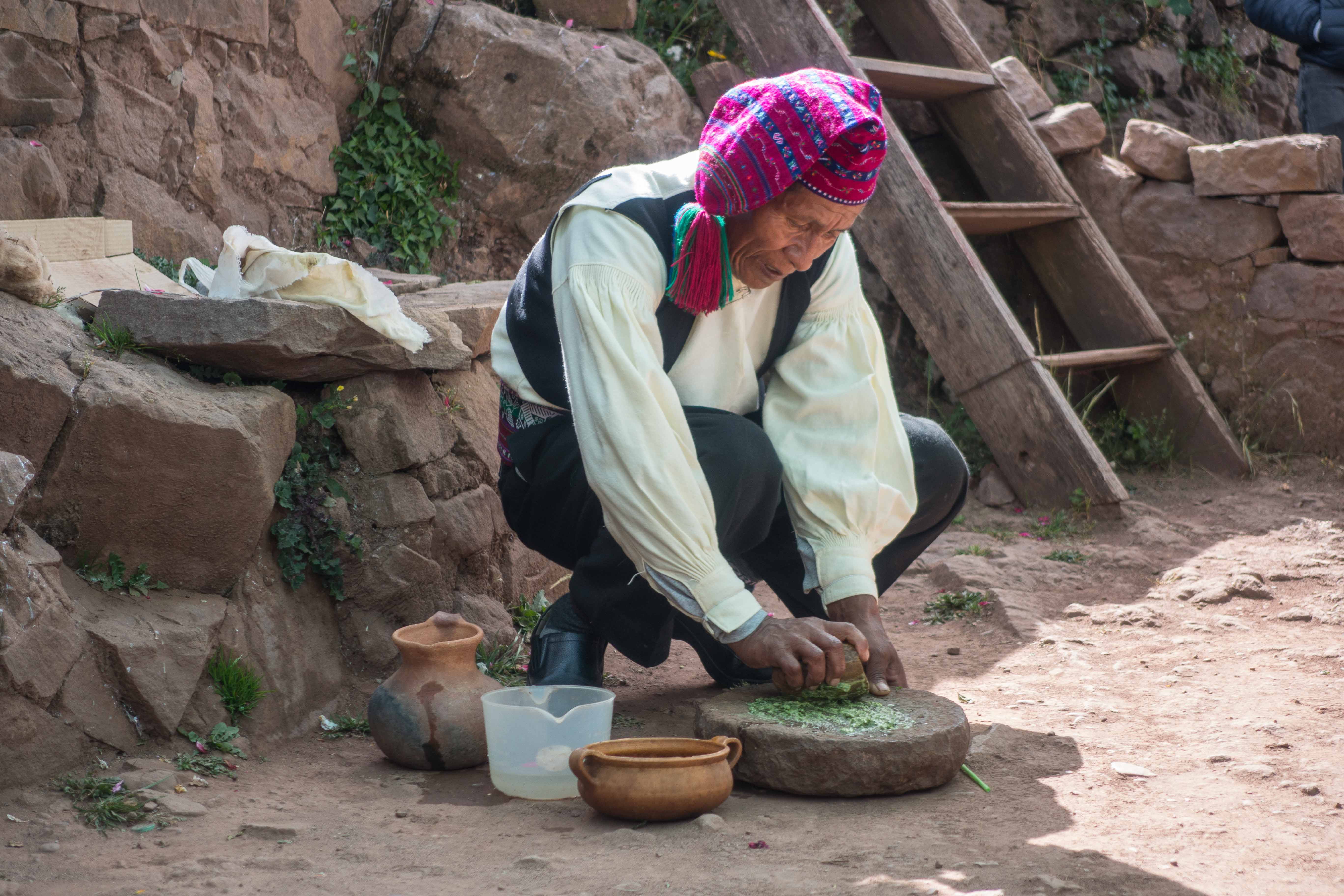 There was some traditional music  as well while Hanna showed us her recent purchase. 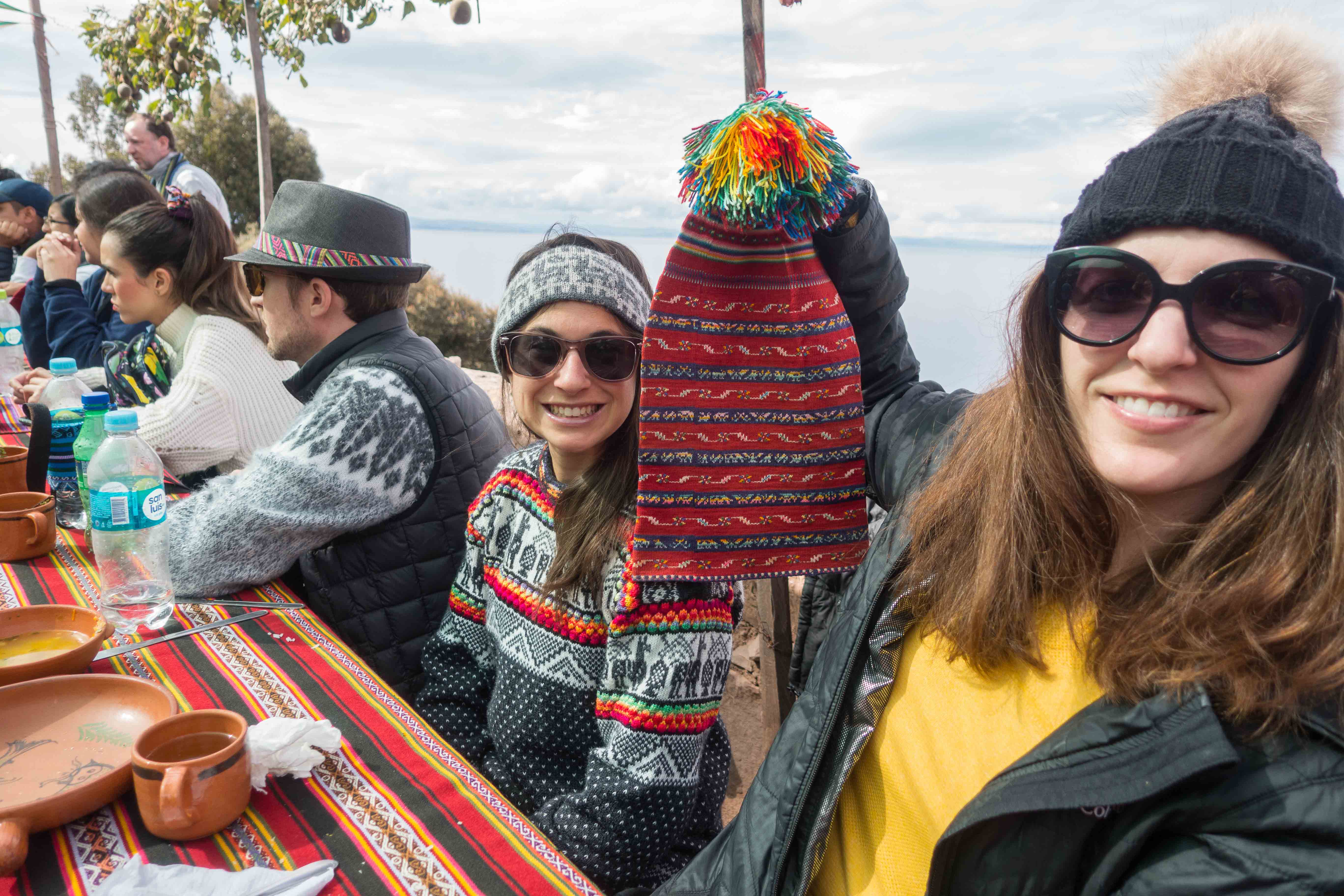 We were back in the boat to return to our island for some traditional activities! 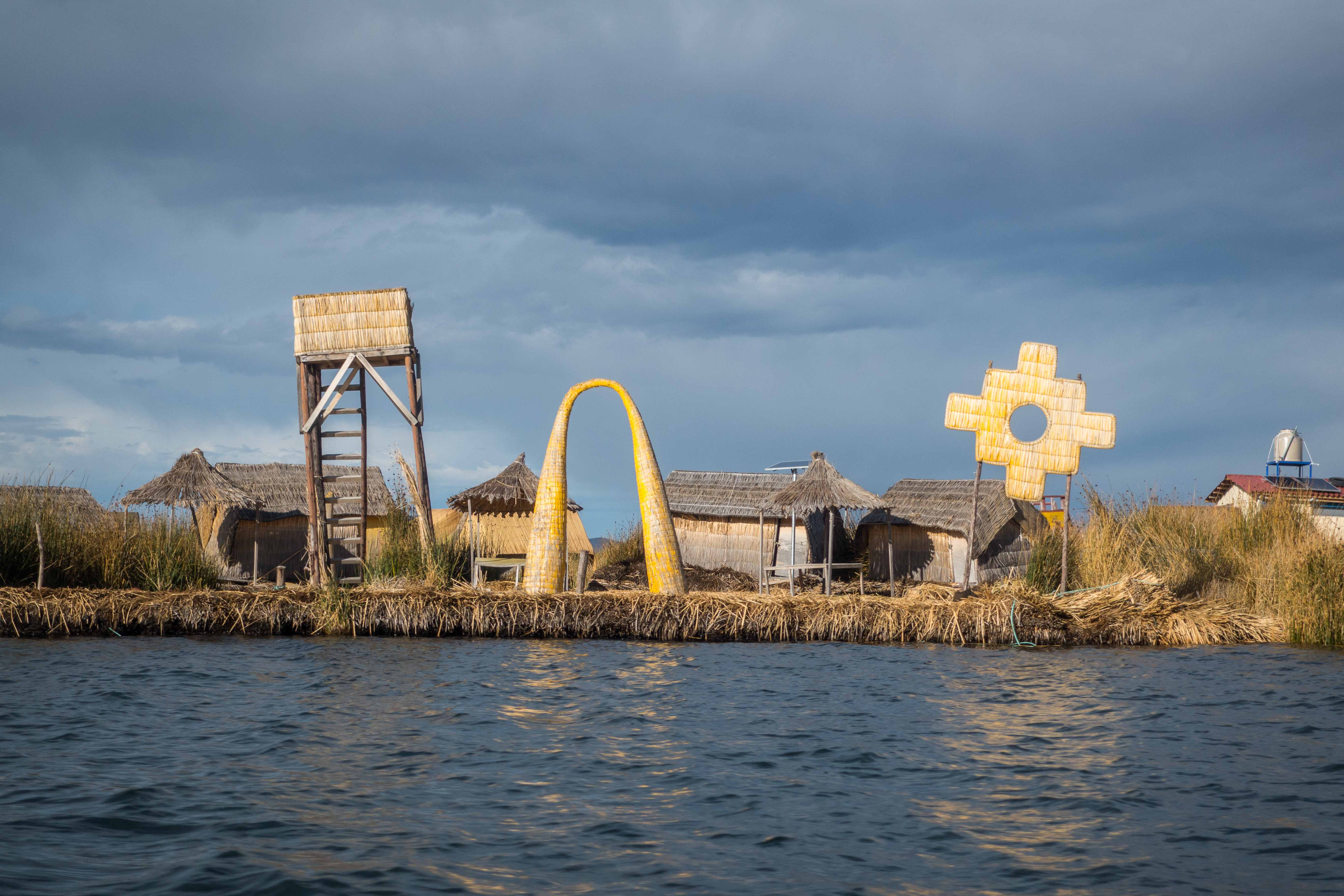 We were given clothes to dress like Uru people! 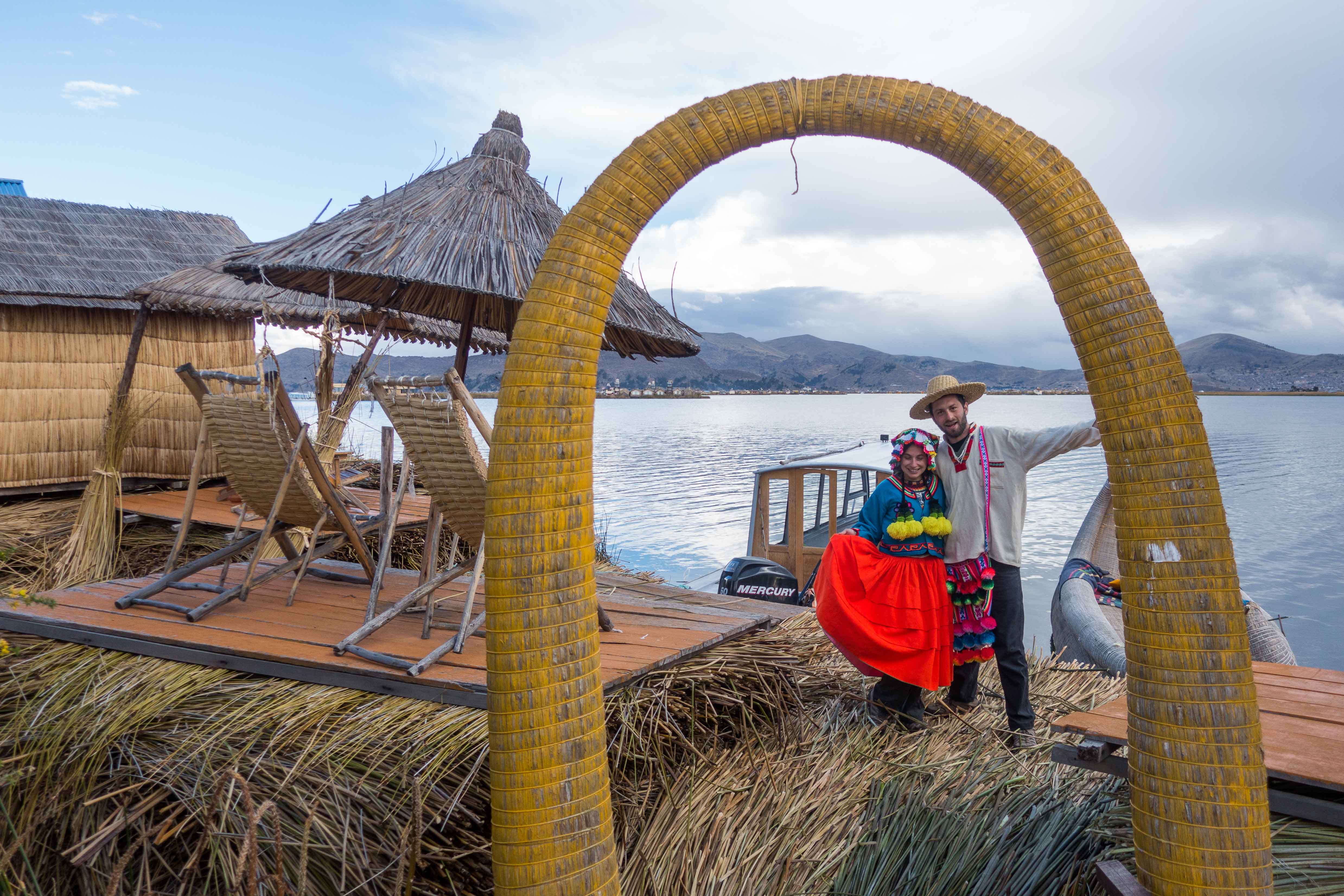 I climbed the watch tower to get an aerial view of the islands. You can spot Sarah, Thomas and Hanna below. 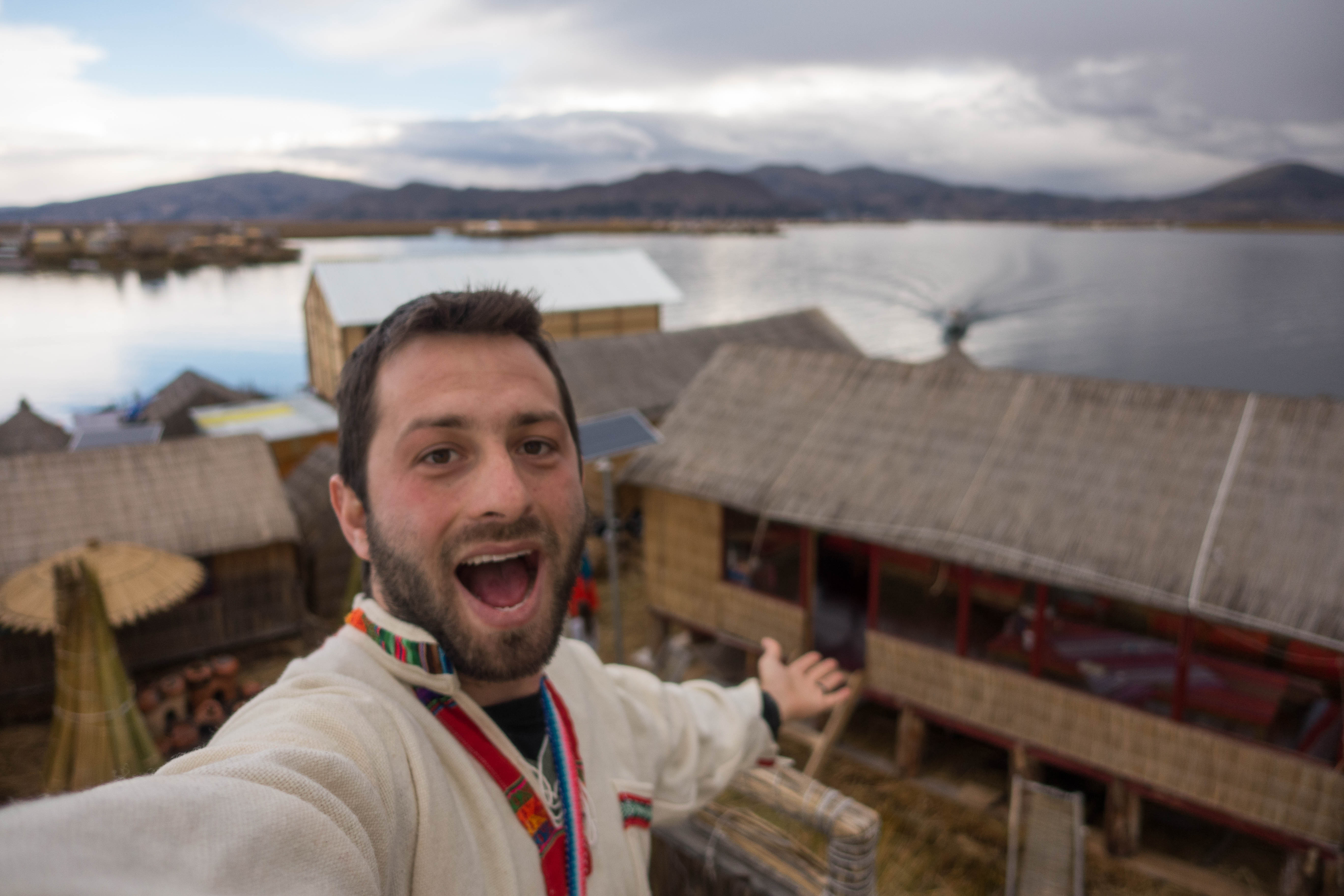 We jumped into the traditional boat to learn about the way of life of the local families.

As we navigated around the island we noticed the super storm coming toward us. Due to our scare the night before we didn’t have time for the leisurely boat ride we first imagined. 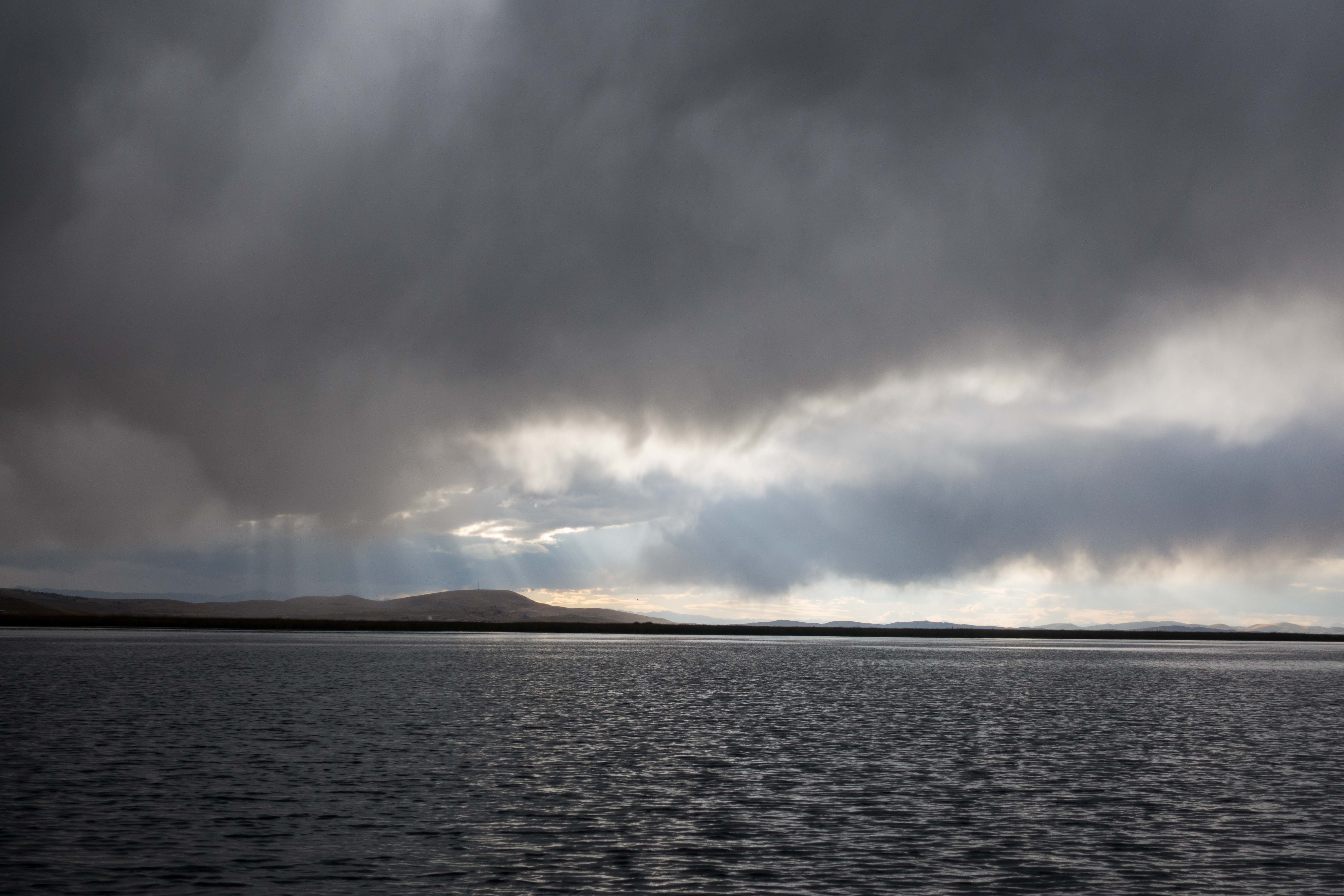 Our host tried to explain how they fish, what they eat and how they build their islands and boats. It was hard to communicate, but with a little effort, we were able to learn a lot!

We docked next to the Totora Reeds. He showed us how they cut them and eat them!! 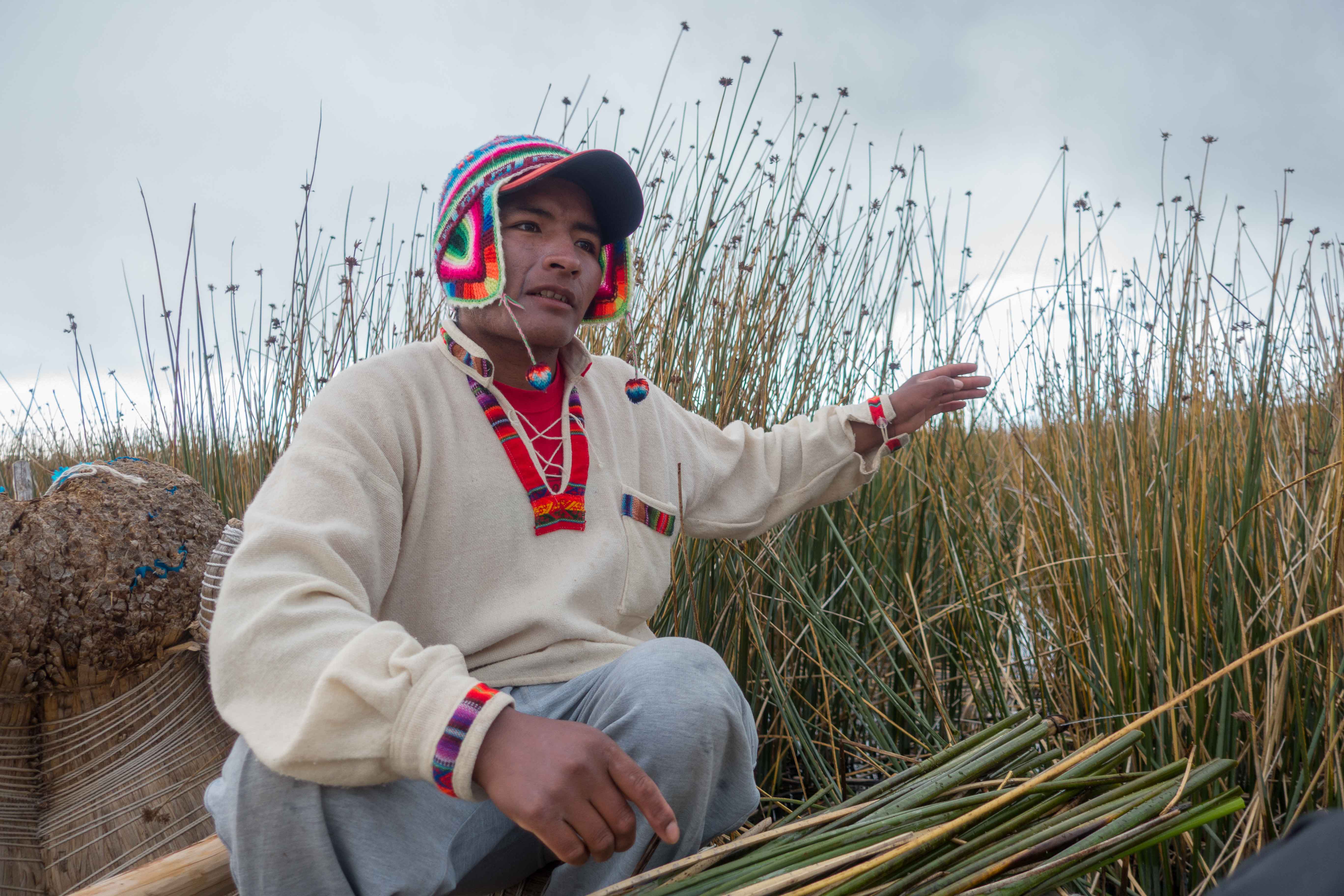 We came back to our island and there were some woman already set-up with a trap for Thomas. More shopping ensued.

While Thomas was buying the whole textile industry in the island. We sat down with our amazing host so he can teach us how to make a hummingbird out of the Totora reeds. Of course, his skills were beyond anything we could have picked up in the few minutes we were watching. He made one of these for everyone who stayed there!

What a beautiful gift!

We boarded the boat to go back to Puno, where we had a reservation in a nice hotel. We were sad to leave the island and this amazing experience. We really recommend anyone going to Peru to try to stay in one of these islands.