For most people, Labor Day means two things: a day off and a chance to say goodbye to the summer. But why is it called Labor Day? Labor Day is a day set aside to pay tribute to working men and women; it honors the American labor movement and the contributions that workers have made to the strength, prosperity, laws, and well-being of the country. It has been celebrated as a national holiday in the United States and Canada since 1894!

We took that opportunity to travel to one of our top U.S cities from our bucket list, New Orleans (NOLA). 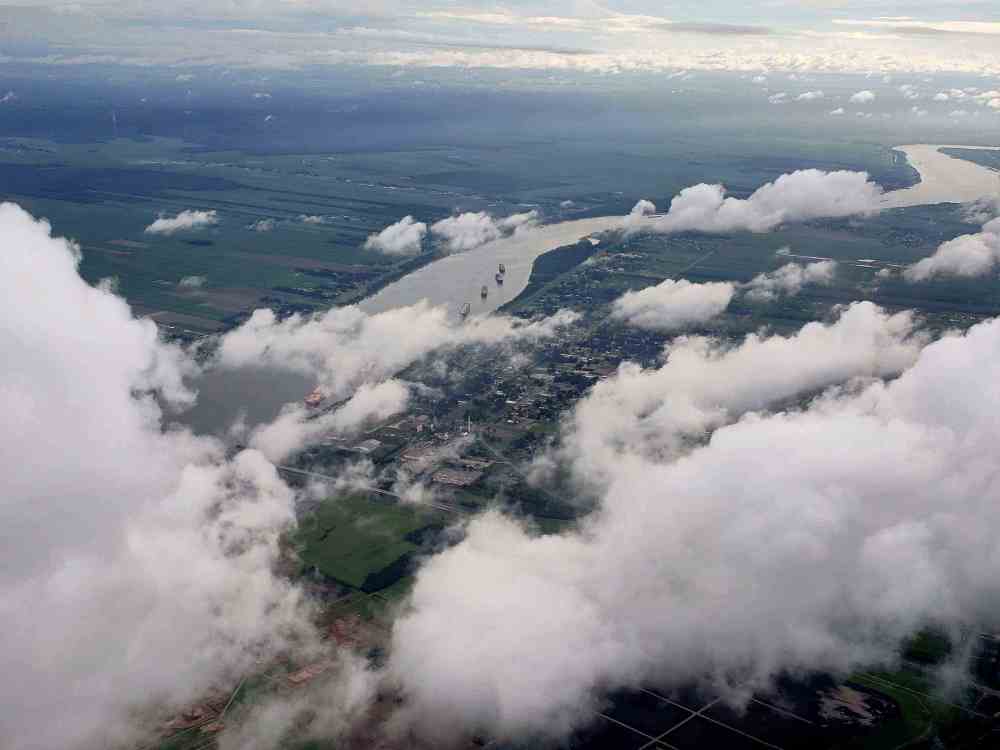 There is around 30 min of flight before landing where the flightpath basically follows the Mississippi, there are many sights along the river, like the Alumina refinery and its distinguished red color mud.

Red mud is a toxic bi-product of the industrial process that refines bauxite, raw aluminum ore, into aluminum oxide, or alumina. This alumina refinery waste is highly alkaline in nature with a pH of 10.5-12.5 and is conventionally disposed of in mostly clay-lined land-based impoundments. The alkaline constituents in the red mud impose severe and alarming environmental problems, such as soil and air pollution.

When we landed, we immediately realized the high numbers of LGBT community. We have unknowingly arrived at NOLA at the same time as the Southern Decadence Festivities were happening, which is the largest Gay festival of the south with over 300,000 attendees. The rainbow was welcoming them!! 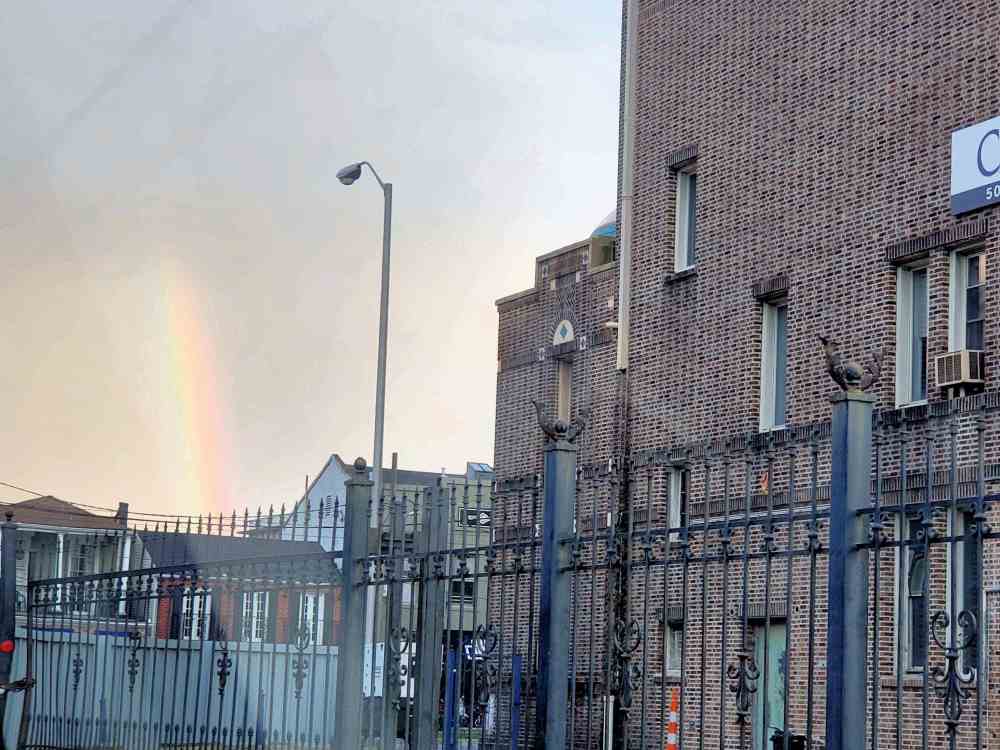 We took a great Uber to our AirBnB. Due to all the traffic our driver entertained us and shared all sorts of stories including his experience with Katrina. The cute place we were staying was located in the charming garden district. 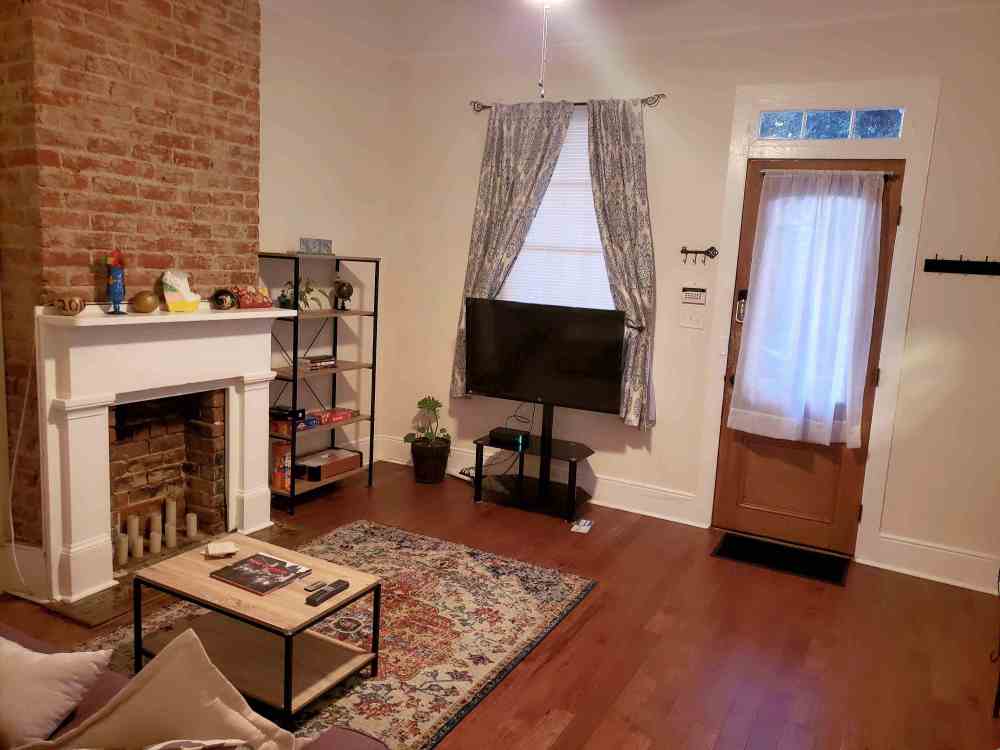 We immediately headed out to meet Bethany and Steven, our O.C. friends that joined us for the trip!. After a couple of beers in a bar, we found a cajun seafood restaurant to eat dinner. The food was expensive but delicious. Sarah ordered the local specialty Red Fish, and everybody shared some alligator balls (balls as in meatballs, not as in testicles). 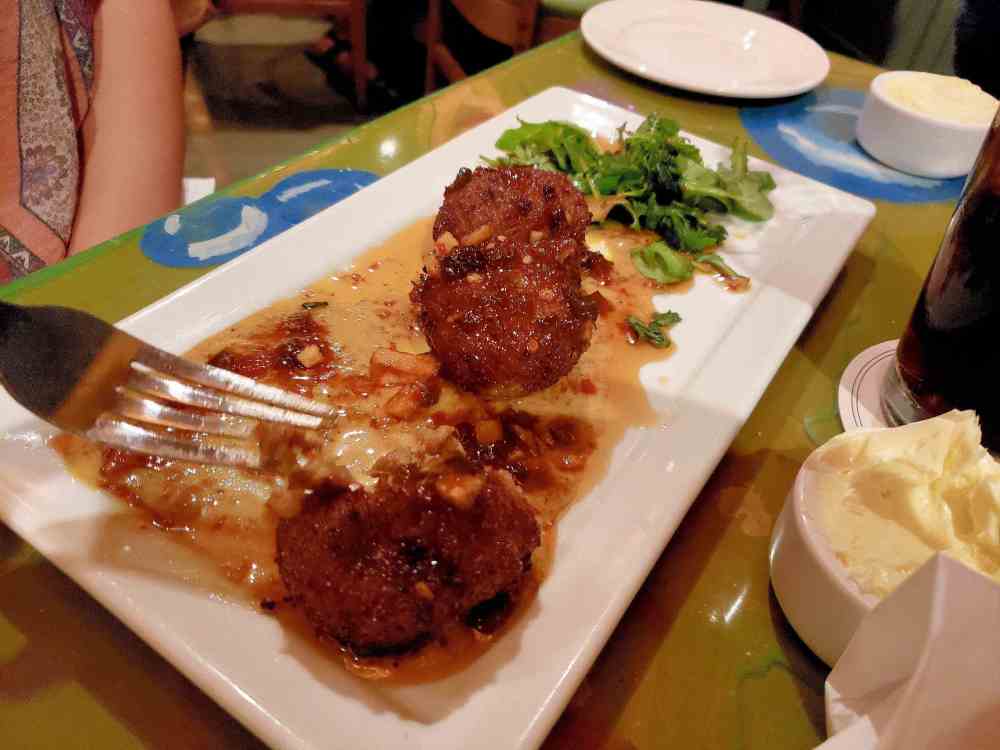 One of the most famous bars is the Carousel Bar & Lounge in the Hotel Monteleone, which of course was crowded and there was no seating available. But watching the main bar rotate was cool to see for 3 minutes until we left the place in the search for a beer.

We got our first glimpse of the infamous Bourbon Street in the French Quarter. There was A LOT of very very very very drunk people and many naked men. The street smells like urine and vomit, and its full of dive bars and strip clubs. This could have been fun when we were 21, but we are an old married couple so we like a more relaxed environment.

There were a lot of drunk people getting in line to pet the police horses. Like if they have never seen a horse before. 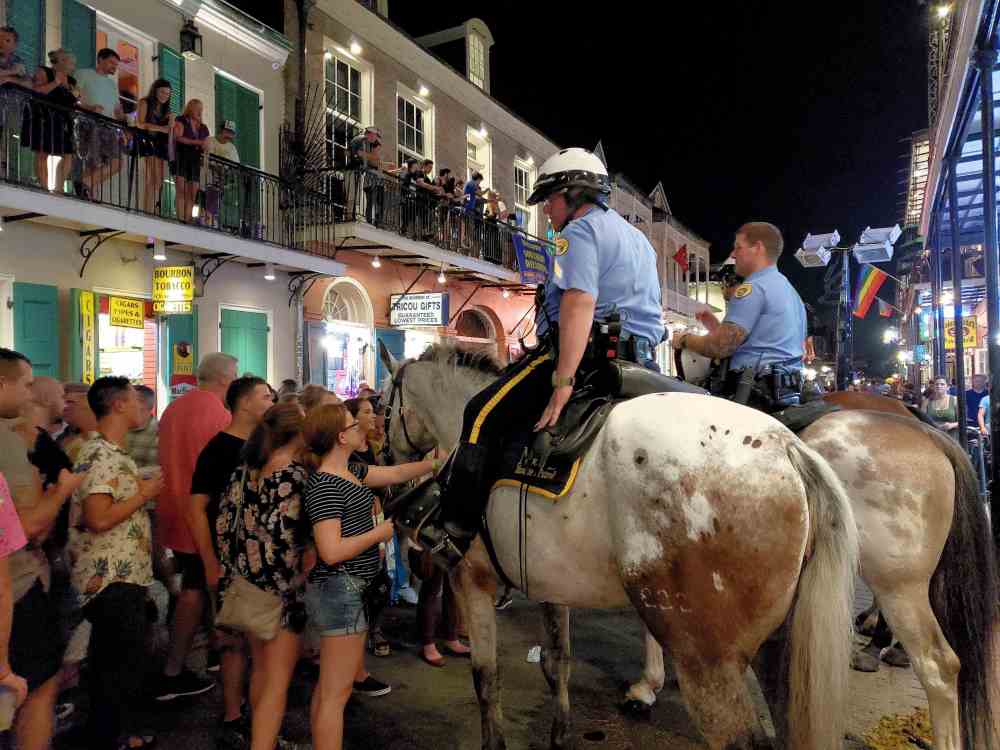 The stores are unique, like this hot sauce bar!

The galleries are also unique like this one where they have the very rare and endangered species, the snow Leopard Eagle.  Nightmares stuff.

We needed a drink to help forget that previous gallery. We got the famous Hurricane, a drink made out of different rums, orange juice, and probably industrial red wall paint for $9. It goes without saying that we will not be ordering another one of these, we value our taste buds more than we value fun! 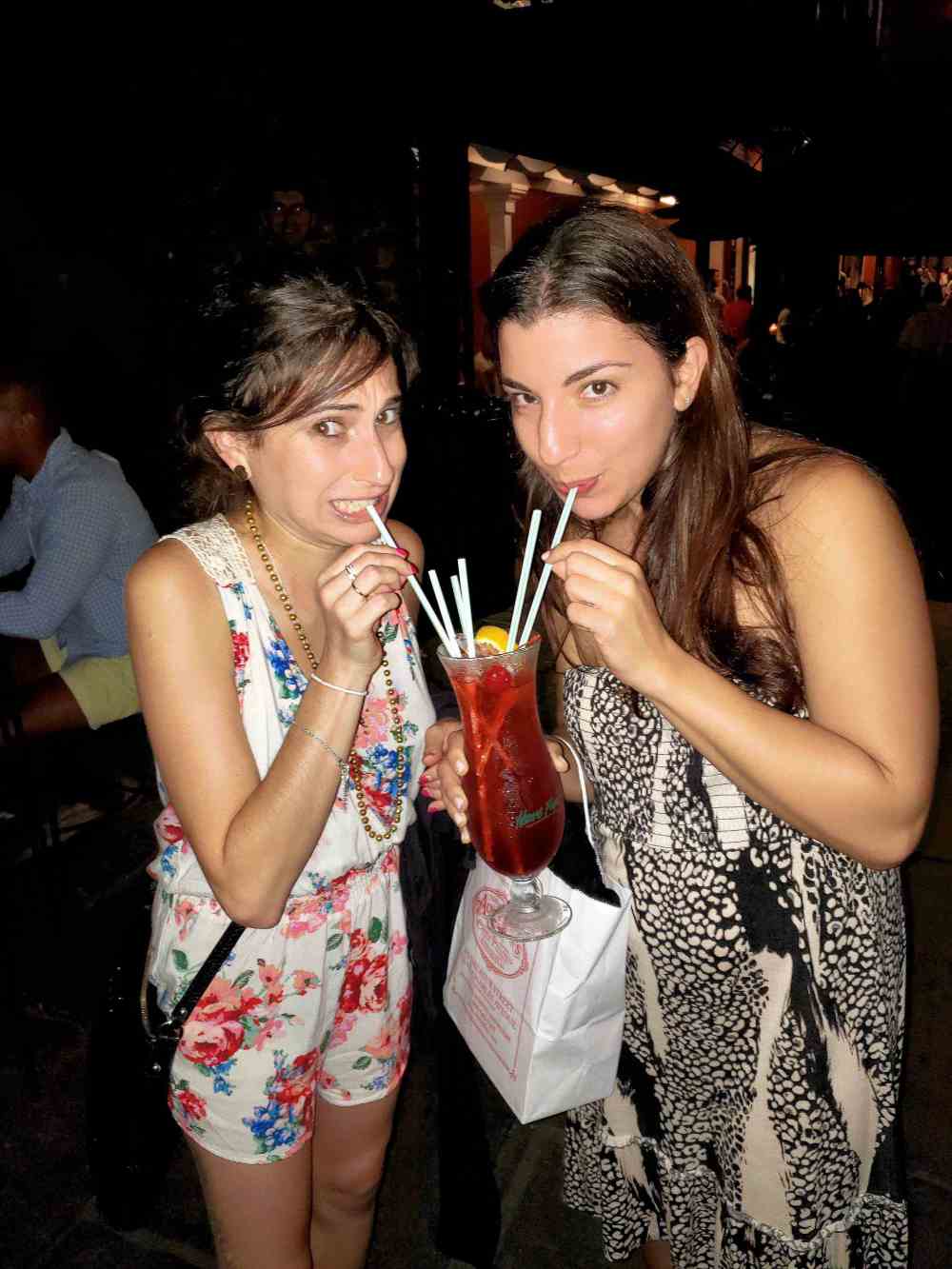 After recharging batteries that night, we were ready for a day full of sightseeing. Which is rare to do for NOLA visitors as they are probably too hungover to leave the room.  The Uber dropped us off at the French Quarter.

The French Quarter, also known as the Vieux Carré (“Old Square”) or Vieux Carré Historic District, is the oldest section of the City of New Orleans. Founded in 1718 by Jean-Baptiste Le Moyne de Bienville, New Orleans developed around the Vieux Carré, the city’s central square. Today, the district is commonly known as the French Quarter, or simply “the Quarter,” a reflection of the diminished French influence after the Louisiana Purchase. 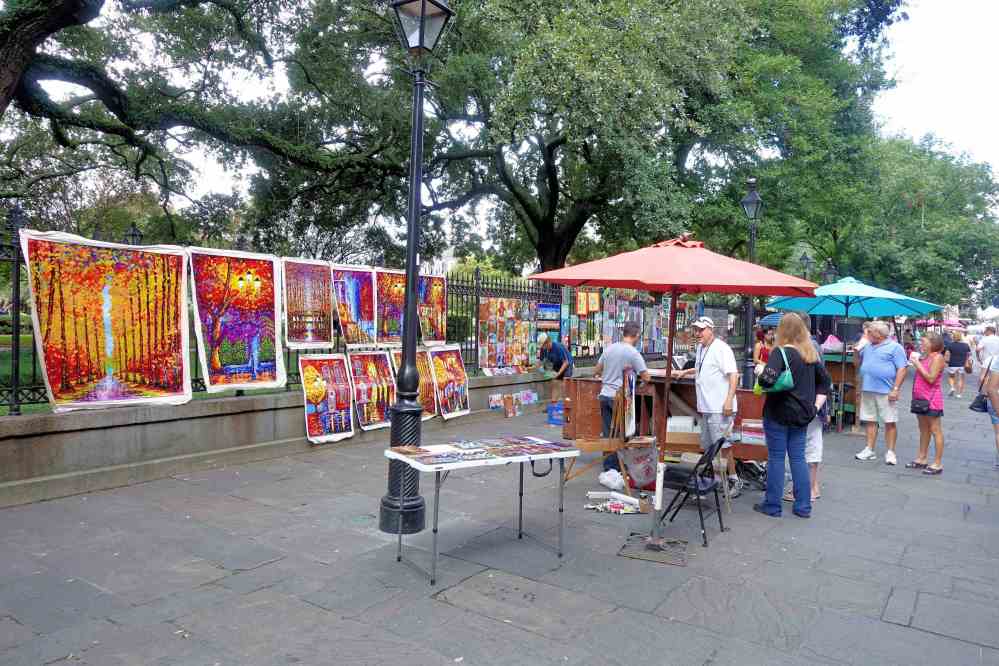 There is music everywhere: in the balconies, in the park, in restaurants….everywhere!!!

On the other two sides of the square are the Pontalba Buildings, matching red-brick, block-long, 4‑story buildings built in the 1840s. The ground floors house shops and restaurants; the upper floors are apartments, the oldest continuously-rented apartments in North America.

Great talent all over the place.

We visited Jackson Square. It was declared a National Historic Landmark in 1960, for its central role in the city’s history, and as the site where in 1803 Louisiana was made United States territory pursuant to the Louisiana Purchase! 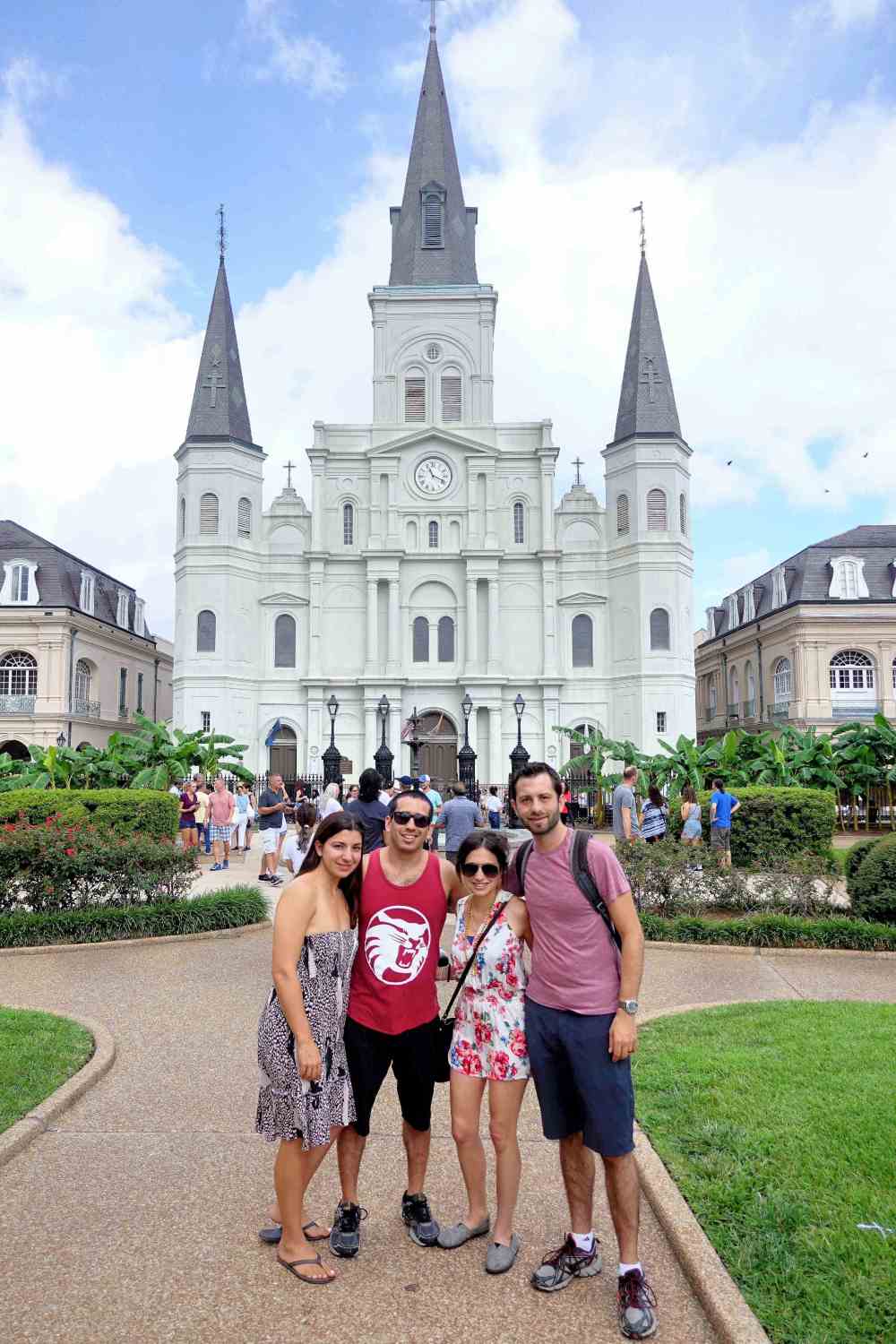 The Cathedral-Basilica of Saint Louis, King of France, also called St. Louis Cathedral, is the seat of the Roman Catholic Archdiocese of New Orleans and is the oldest cathedral in what would become the United States.

There is a little path to the Mississippi River. Which Eitan “needed” to touch of course, while being careful not to lose an arm to the alligators swimming nearby. 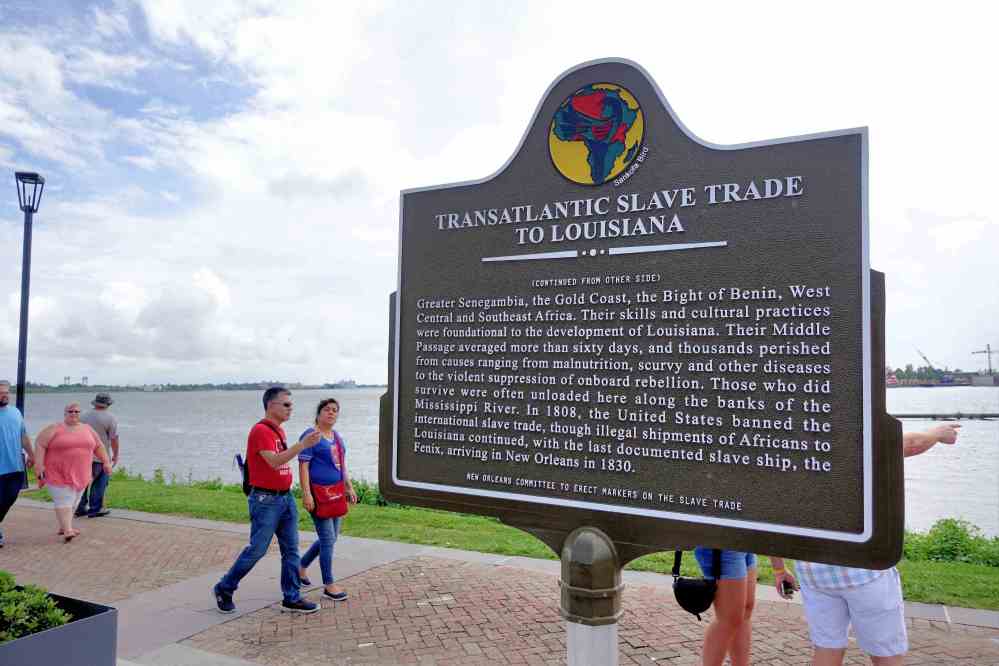 This was the spot where the African Slaves disembarked to then being sold.

One of the canons used at the Battle of New Orleans, which we will learn more about it tomorrow! (Eitan’s heartbeat intensifies of excitement). 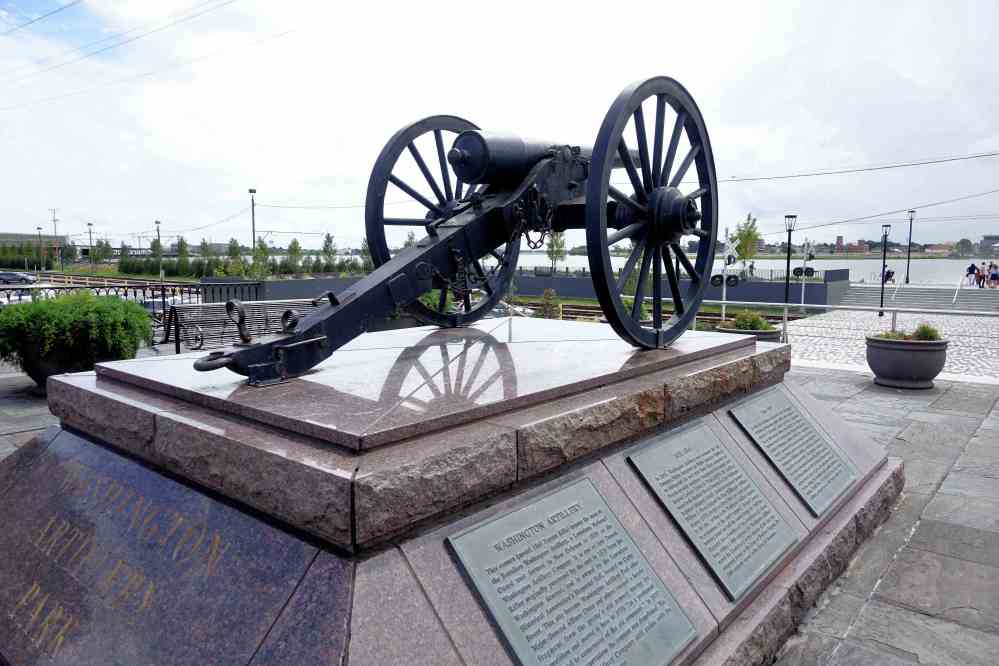 The Most extent historical buildings were constructed in the late 1700s, during a period of Spanish rule, or during the early 1800s, after U.S. annexation and statehood. We had a hearty lunch in the main square. The food here was good, especially Steven’s rice and beans. 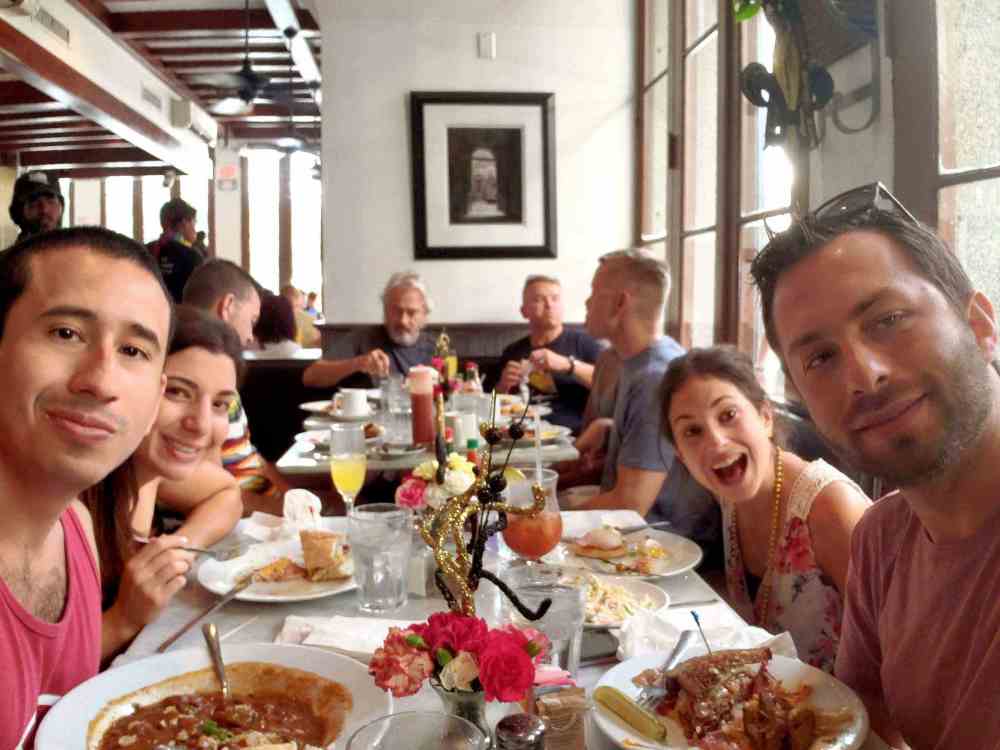 We took a tour to the Saint Louis Cemetery #1 and walked to the end of the French Quarter where it is located. At the entrance, there is a spot on the wall where Jesus Christ made an appearance. I think it looks more like Don Quixote made an appearance, but who am I to judge.

Our guide was not the most beautiful woman in the world, but she was the oddest person we have ever met, it gave the cemetery tour +5 points in creepiness.

Most of the graves are above-ground vaults constructed in the 18th and 19th centuries. St. Louis Cemetery No. 1 is the oldest and most famous. It was opened in 1789, replacing the city’s older St. Peter Cemetery (no longer in existence) as the main burial ground when the city was redesigned after a fire in 1788. 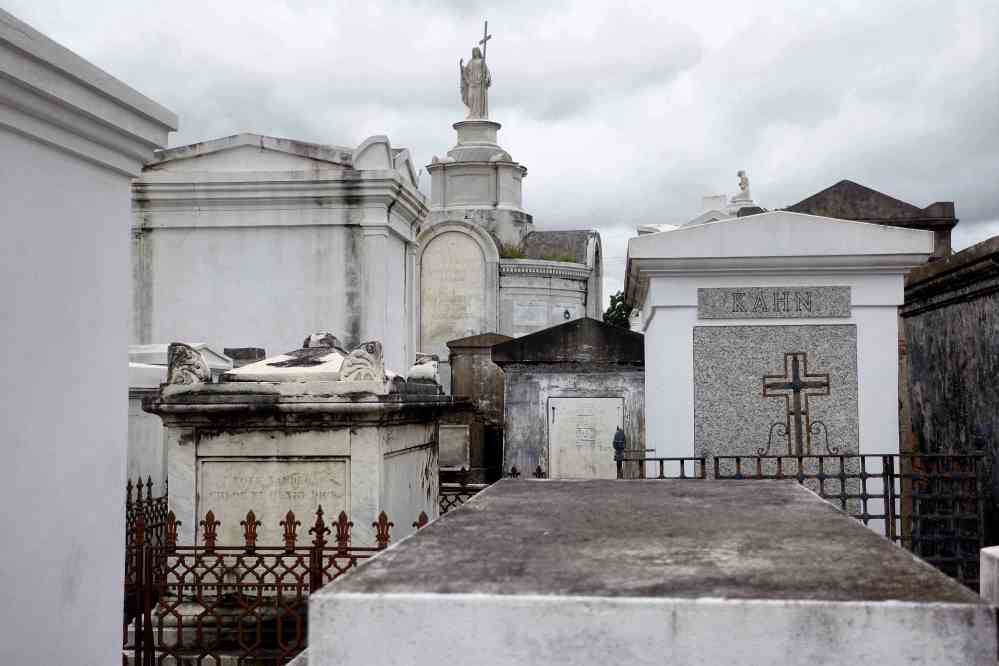 Do you see the circled X? me neither, and that is because these things don’t work. If you want your wish to come true, the only proven way is to throw a coin into a fountain. That for sure will do it!!

After learning a lot of eerie things about this cemetery, like how the tombs are prepared, the history of vandalism, the voodoo influence, etc… We learned about the most amazing and historical sight of this city: Nicolas Coppola, also known as Nicolas Cage, has already purchased his tomb here and he made it a pyramid shape. You might think this is some stage for National Treasure 2, but I am honored to announce that this is 100% his tomb and that he is a bit off his rocker.

And another shot of the guide for your viewing pleasure.

The Southern Decadence was in full gear. 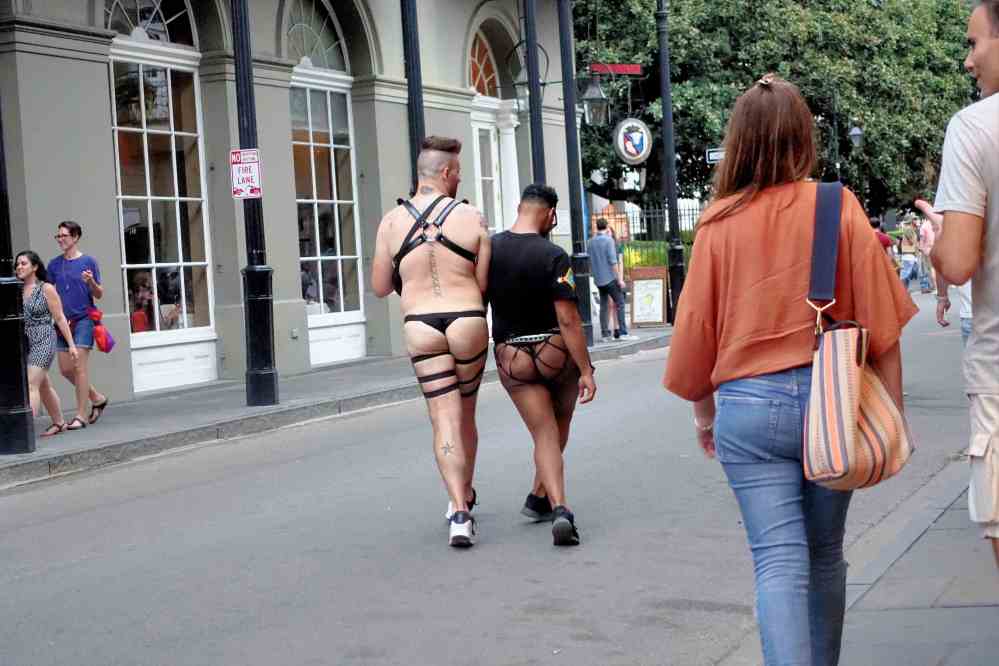 The streets are full of art. 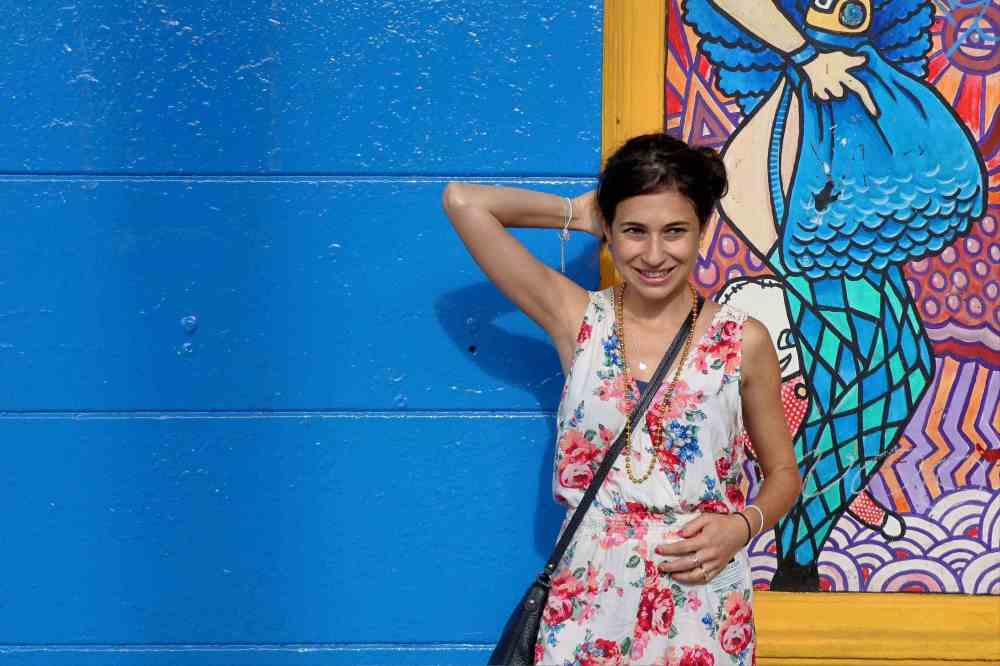 We walked towards the French Market.

Founded as a Native American trading post predating European colonization, the market is the oldest of its kind in the United States. 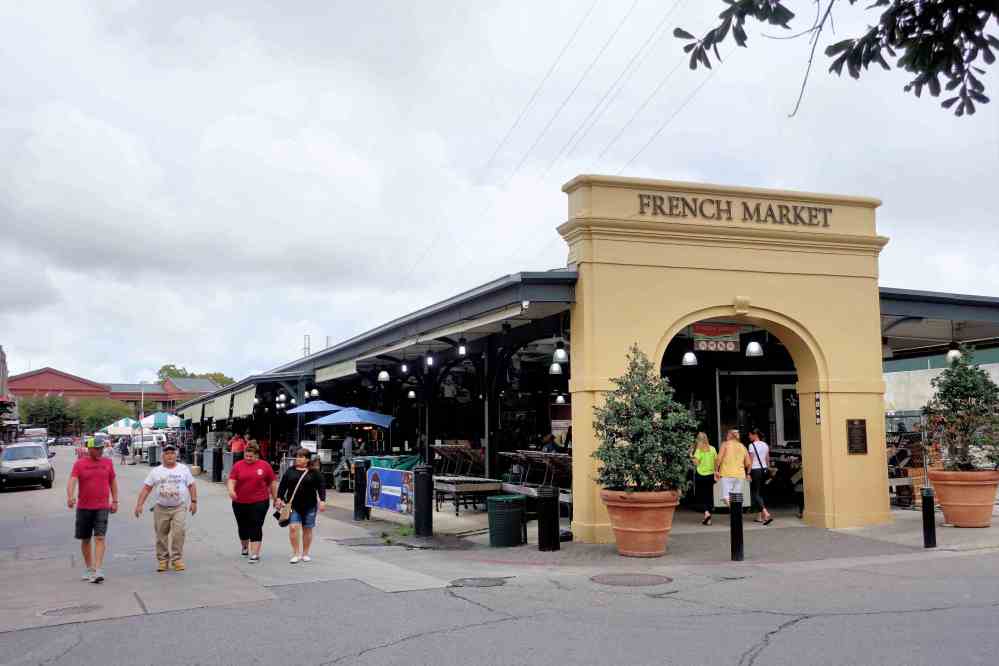 We, of course, bought a little art that we will probably never frame and will collect dust with all the other arts we have bought during our travels.

It was nice to walk around, they have food, arts, and souvenirs.

We liked the gay Mermen for Christmas trees.

Ironwork is so associated with New Orleans that it may come as a surprise to some that wrought iron (worked by hand) and later cast iron are Victorian additions and not original to the oldest masonry townhouses. Previous to the mid-1800s in New Orleans history, balconies and porches were bounded by tall wooden columns. Decorative ironwork, derived from Spanish architecture, mimicked another famous Spanish product: lace, and offered an ornate visual contrast to otherwise sober, handsome fronts. The more ornate work is often floral or leafy, adorned with French fleur-de-lis and coquilles, or shells (associated with Saint Jacques and religious pilgrims), also abound.

We took a quick pit stop for a beer and oysters at a Jazz place in Frenchmen Steet. Eitan even tried the oysters and they were not bad.

Oysters are a local dish here in NOLA. One of the most interesting oyster facts is that oysters change their sex during their lives, starting as males and usually ending as females. The shape of oysters varies and depends mainly on how many crowd around them in the bed as they develop. Similar to what some of the Southern Decadence attendees go through in their lives as well.

Restaurants usually have a bar facing the street for the tourists to buy drinks “Drive-Thru” style.  Did I mention it is allowed to drink alcohol on the streets? but remember to only drink in plastic containers!

It was time to let our brains create more nightmares by visiting the super small Voodoo Museum. Voodoo has been a significant part of New Orleans culture since the city was first established in the 1700s. The New Orleans Historic Voodoo Museum strives to preserve this aspect of NOLA history through education and entertainment. The museum explores the mysteries, legends, and traditions of voodoo, and educates visitors on the influence voodoo has had throughout the city’s history.

Voodoo describes a set of spiritual folkways developed from the traditions of the African diaspora. It is a cultural form of the Afro-American religions developed by West and Central Africans populations of the U.S. state of Louisiana, though its practitioners are not exclusively of African-American descent. Voodoo is one of many incarnations of African-based spiritual folkways rooted in West African Dahomeyan Vodun.

The museum takes around 20 min to visit and it is not good for claustrophobics, but it is interesting to learn a little about this ancient religion and see real Voodoo dolls! Creepy place. 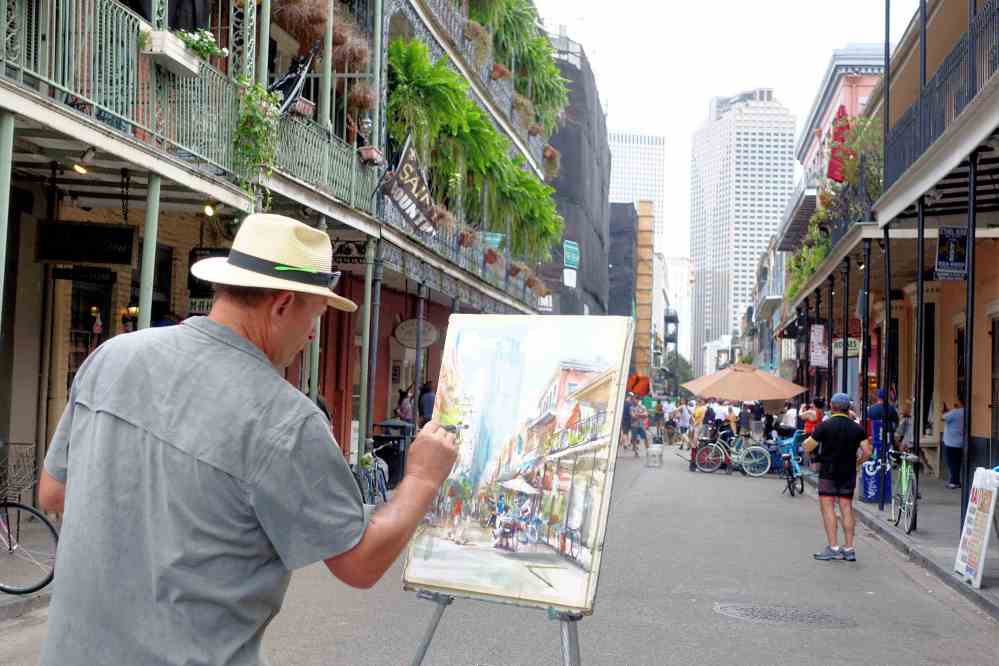 We walked around the galleries in the French Quarter. There is some amazing art here.

After walking more around the city, we encounted amazing historical buildings. 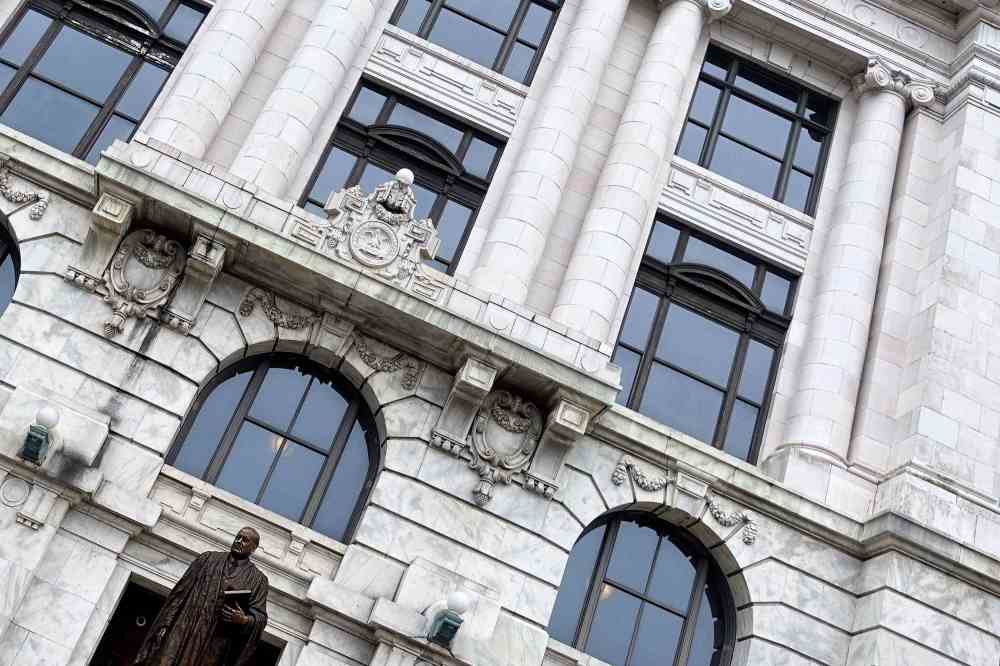 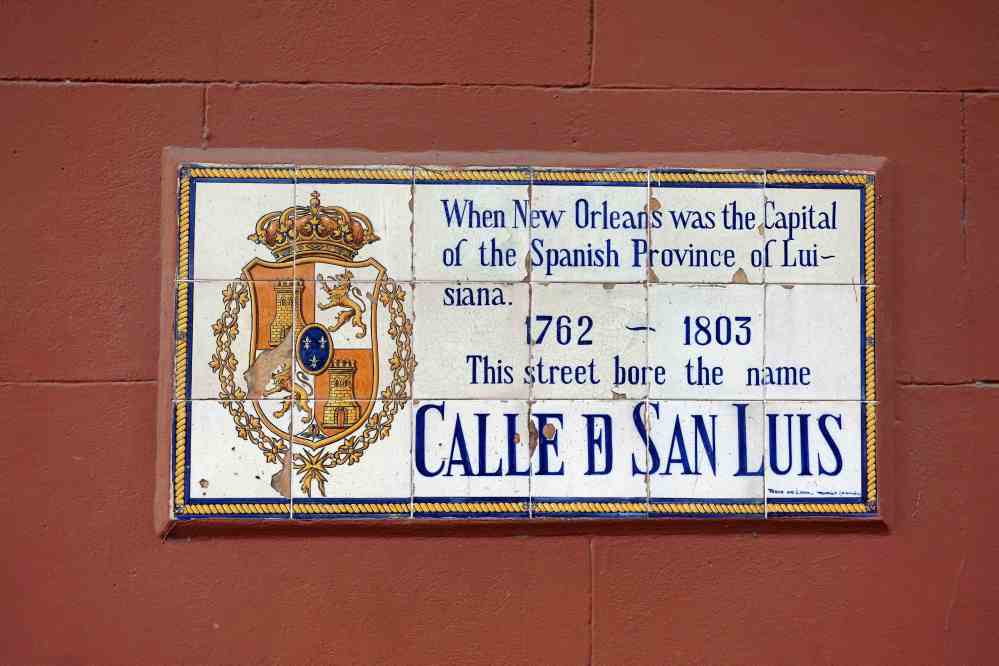 Eating in NOLA is not the cheapest, but if you look closely there are several restaurants offering set menus for a reasonable price. We found one for $20 and it did not disappoint us!!

To end the night, we sat at one of the Bourbon St. balconies to enjoy some Huge Ass Beers and people watch.

This is the view from above. It goes without saying that we saw many not so PG13 stuff. The incredible part? people bring their 5-year-olds to walk around here at 11 pm. I’m not sure if a kid is prepared to see this debauchery.

Bonus Pic Of The Day: Mini Police Cars!! look at this cute non-intimidating police car. What happens if they arrest you? they probably walk you to the station because I doubt you’ll fit in the trunk.