Our flight to Bergen arrived really late, but we were still able to see the mighty Norwegian Fjords from the air. 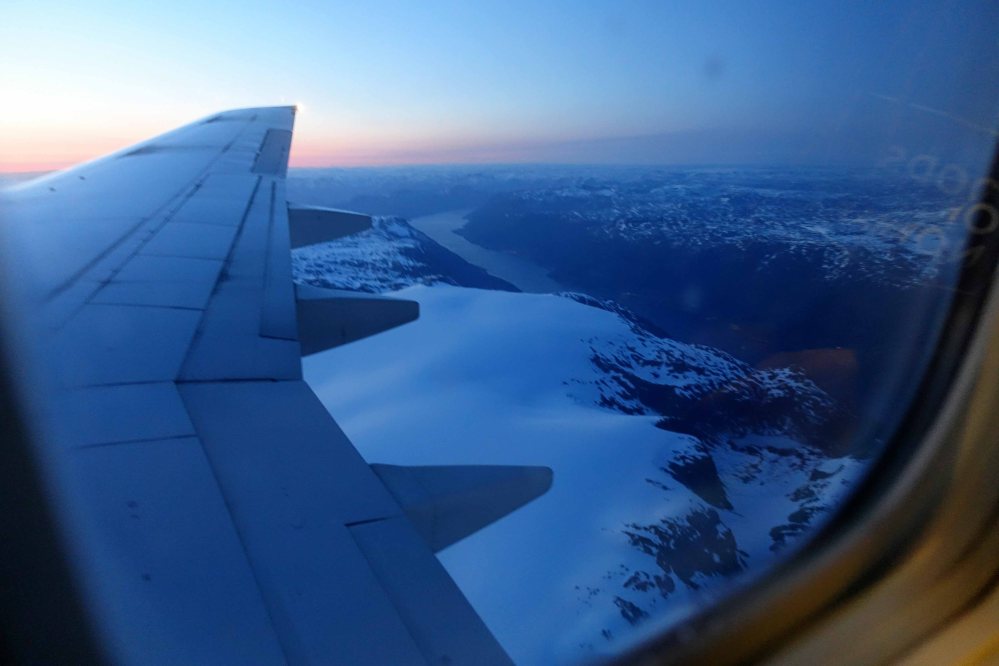 We were so lucky to choose the hostel right above the loudest hostel in the city so since we couldn’t sleep we walked around to see the excitement but didn’t last long because we were tired!  But rest not assured, we could not sleep at all, especially Sarah.

The next morning we were received by parades and party! it was Norway’s Constitution Day (Independence Day)!!

Bars and restaurant were already packed, we heard that you needed a reservation from months in advance to get a table in the best restaurants in the city. 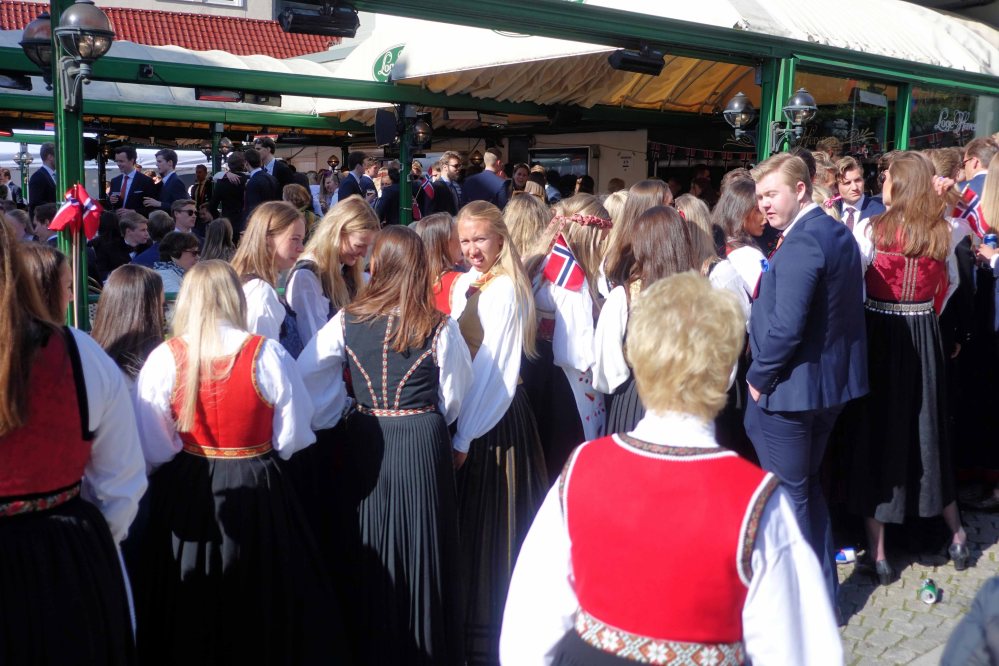 The Constitution of Norway was signed at Eidsvoll on May 17 in the year 1814. The constitution declared Norway to be an independent kingdom in an attempt to avoid being ceded to Sweden after Denmark–Norway’s devastating defeat in the Napoleonic Wars. 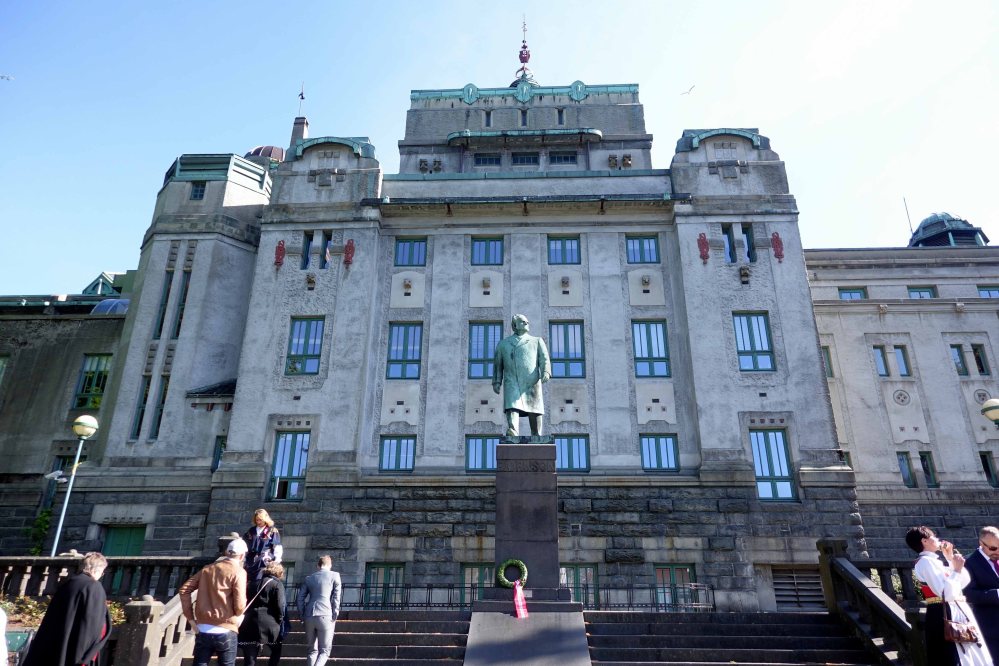 We stopped for a quick bite and Sarah joined the party early with a Norwegian IPA.

The parade starts when you hear the cannon shots fired, there is really not a bad place to stand (unless you are Sarah’s height) as the parade is long and travels through all the city.

Norwegians are tall, really tall. Sarah had trouble watching the parade so we were constantly moving to find her a good spot. 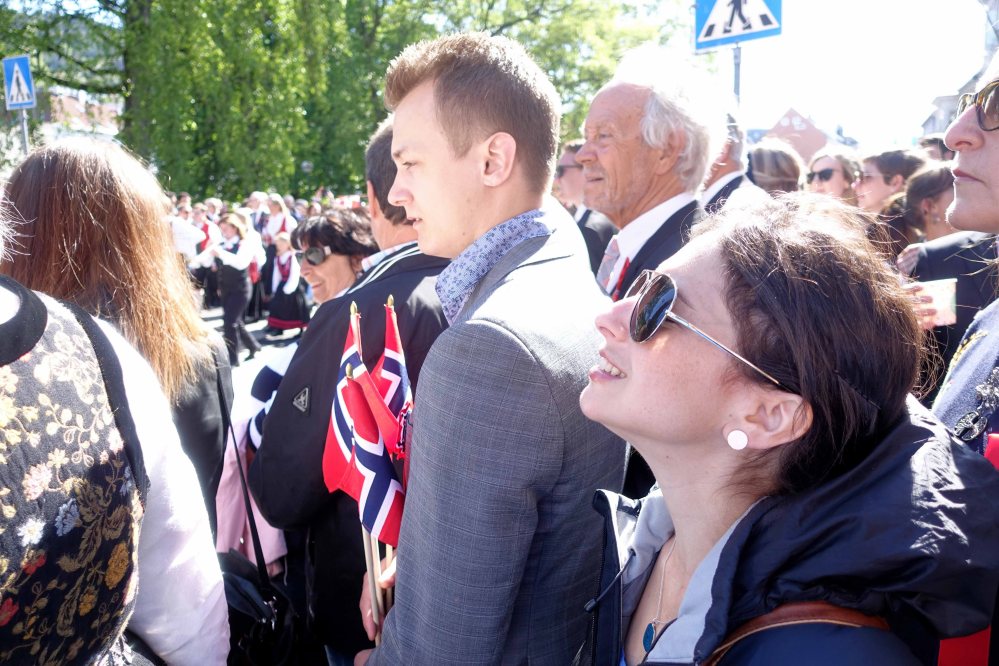 The celebration of this day began spontaneously among students and others from early on. However, Norway was at that time in a union with Sweden (following the Convention of Moss in August 1814) and for some years the King of Sweden and Norway were reluctant to allow the celebrations.

By historical coincidence, the Second World War ended in Norway nine days before that year’s Constitution Day, on May 8, 1945, when the occupying German forces surrendered. Even if The Liberation Day is an official flag day in Norway, the day is not an official holiday and is not widely celebrated. Instead, a new and broader meaning has been added to the celebration of Norwegian Constitution Day on May 17. Here we see U.N’s blue helmet veterans. 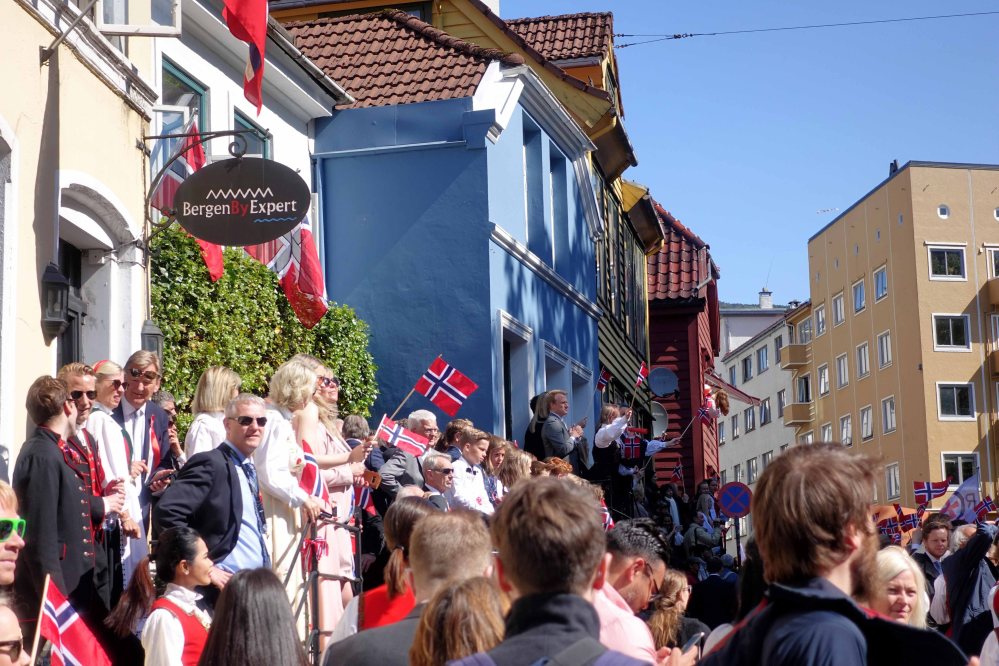 The parade lasts for hours, and we only had a day here. So we started our walk to the other side of town, where the cable car is located. 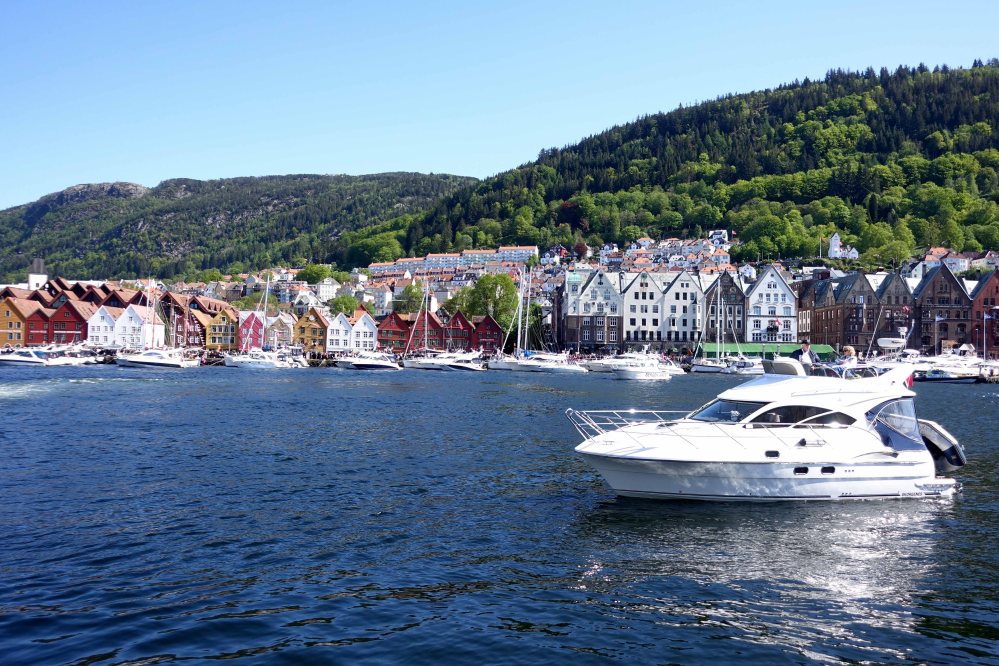 On the way there, we stopped at the fish market. Everything was so fresh and the salmon free samples were amazing.

The Fish Market in Bergen has existed since the 1200s and has since then been one of the most important places for trade between fishermen, farmers and the inhabitants of the city. In addition to the merchants on land there were also historically sales from boats along the quay. Fishermen who lived outside the city used to row into the Fish Marked to sell their catch of the day before rowing back home the same day.

The first Fish Marked in Bergen was located next to Bryggen in Bergen in the Nikolaikirkeallmenning. When the Hanseatic league came to Bergen in the 1300s, the area was filled with German merchants and the city grew fast. Until the 1500s, the local merchants continued to trade in the Bryggen area, but in 1541 a demand was put forward to move the Fish Marked to prevent the Hanseatics from gaining too much power over the city’s most important trading place for the citizens of Bergen. In 1556, the Fish Marked was moved to the inner part of Vågen and established itself as the central trading venue in Bergen. The Fish Marked became increasingly important and grew with the surrounding area. A large amount of buildings was built in the area through the 1700s and 1800s.

Someone told a joke to this guy before dying:

Ulriken Express takes you by cable car to the highest of Bergen’s famous “Seven Mountains”. The tour takes you to spectacular scenery and mountain terrain 643 metres above the city streets.

The cable car takes around 15 minutes to complete the ride.

From the summit, you can enjoy magnificent views of Bergen and the surrounding area – the sea, the islands, fjords and mountains.

There was a bunch of friendly goats walking around the top of the mountain.

Norway’s traditional national costume, the bunad, plays a central role in special festive events in the Scandinavian country. A less-well known fact about the traditional dress is that there are more than 400 different regional variations. According to Norwegian custom, bunads worn on May 17th should come from the area the wearer or their family originates from. 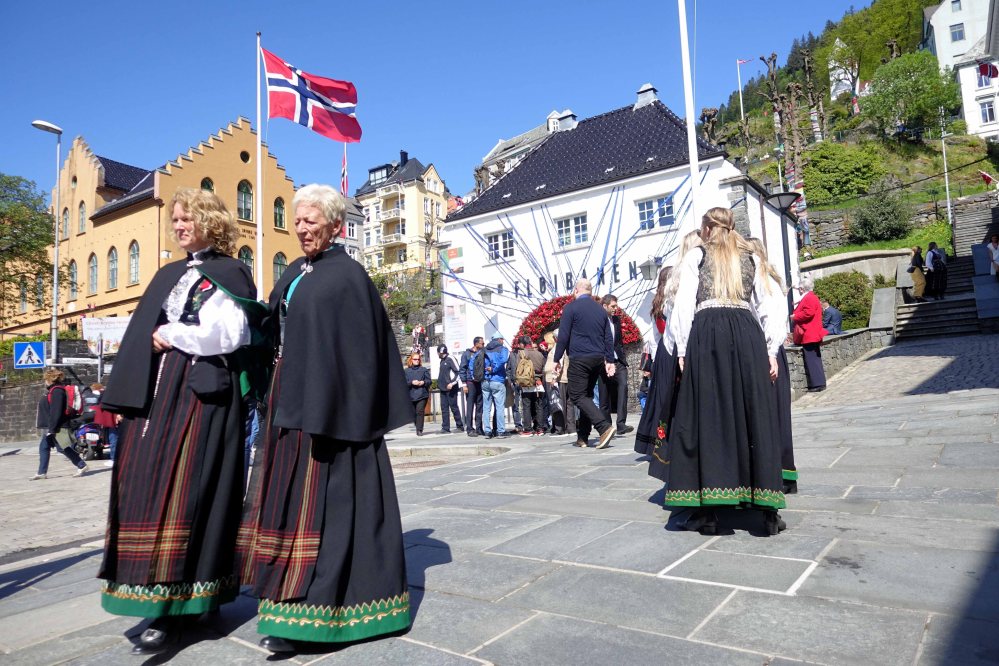 This was the nicest Mcdonalds we have ever seen! 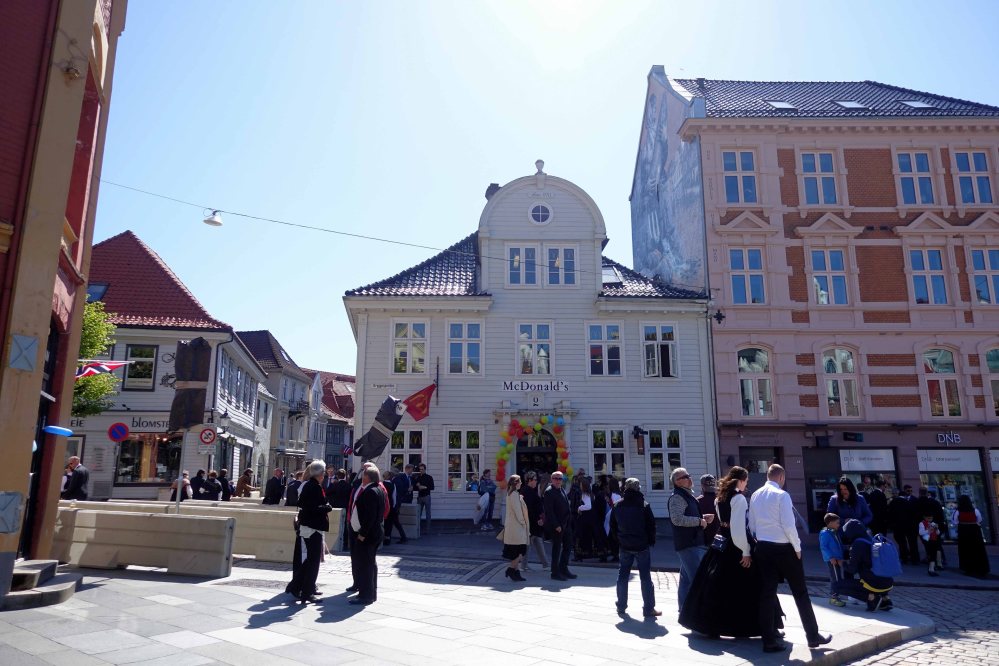 We walked towards Bryggen, the most famous area in Bergen. The very first buildings in Bergen were situated at Bryggen, which has been a vibrant and important area of the city for many centuries.

Sarita’s ears were cold, so she HAD to buy a head warmer. I still think she was not that cold and this was just an excuse to go shopping!

Bryggen has been ravaged by many fires, the great fire of 1702 in particular. It reduced the whole of the city to ashes. The area was rebuilt on the foundations that had been there since the 12th century, which means that Bryggen is basically unchanged despite the passing centuries.

Bryggen is now part of our common heritage and has a place on UNESCO’s World Heritage List, and the city of Bergen is a designated World Heritage City. The world heritage site consists of the old Hanseatic wharf and buildings, and one of the best known urban areas from the Middle Ages in all of Norway. 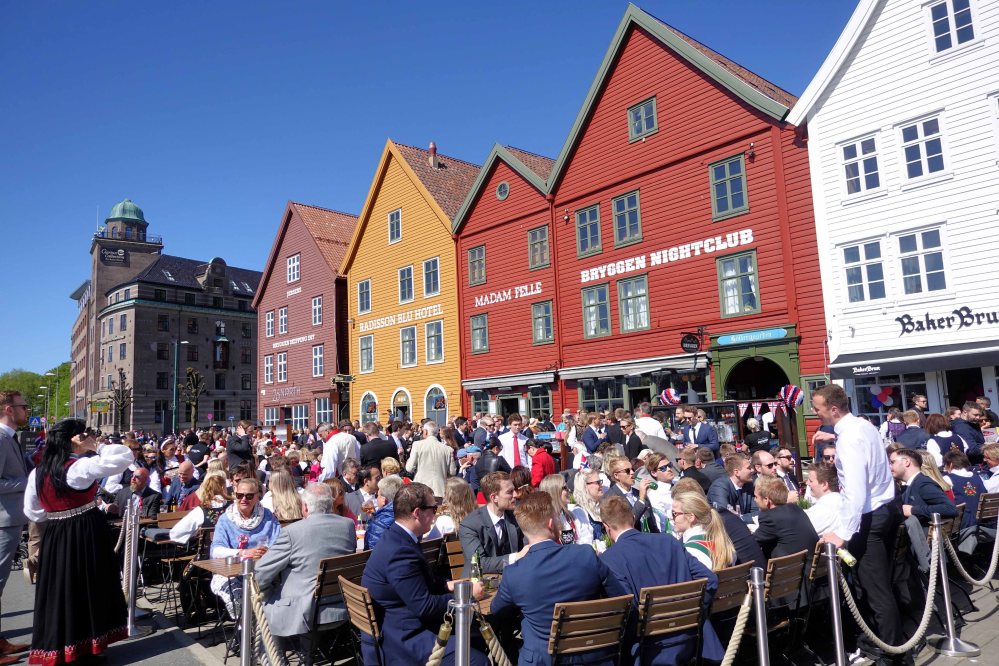 In 1360, the German Hanseatic League set up one of its import and export offices at Bryggen, dominating trade for almost 400 years. To stroll through the narrow alleyways and overhanging galleries is to step back into the mists of time and a bygone era. 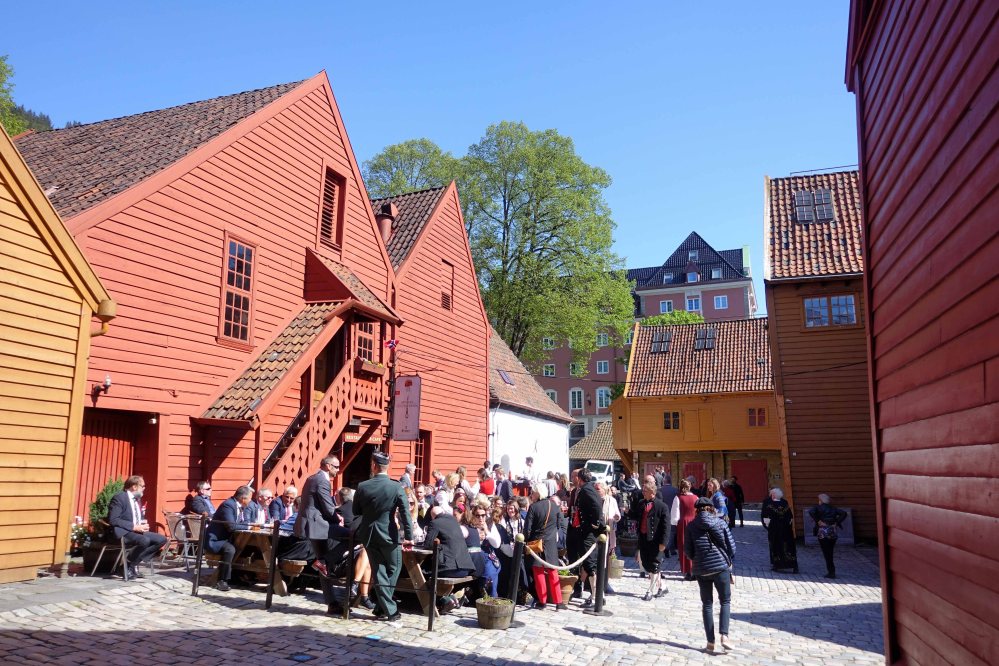 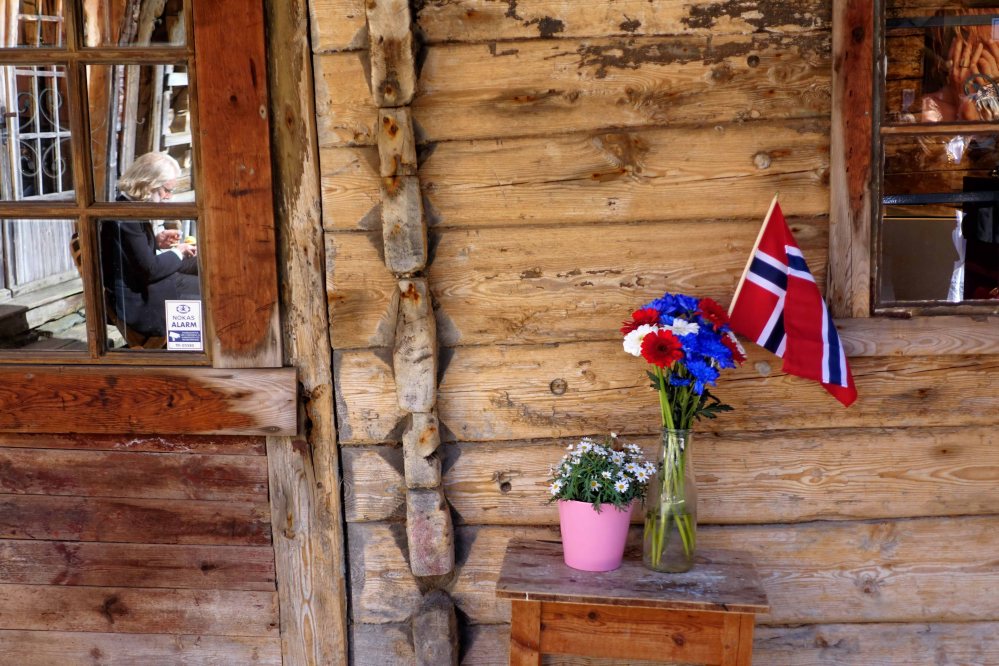 There are a bunch of little stores and workshops inside these buildings, but they were closed today. 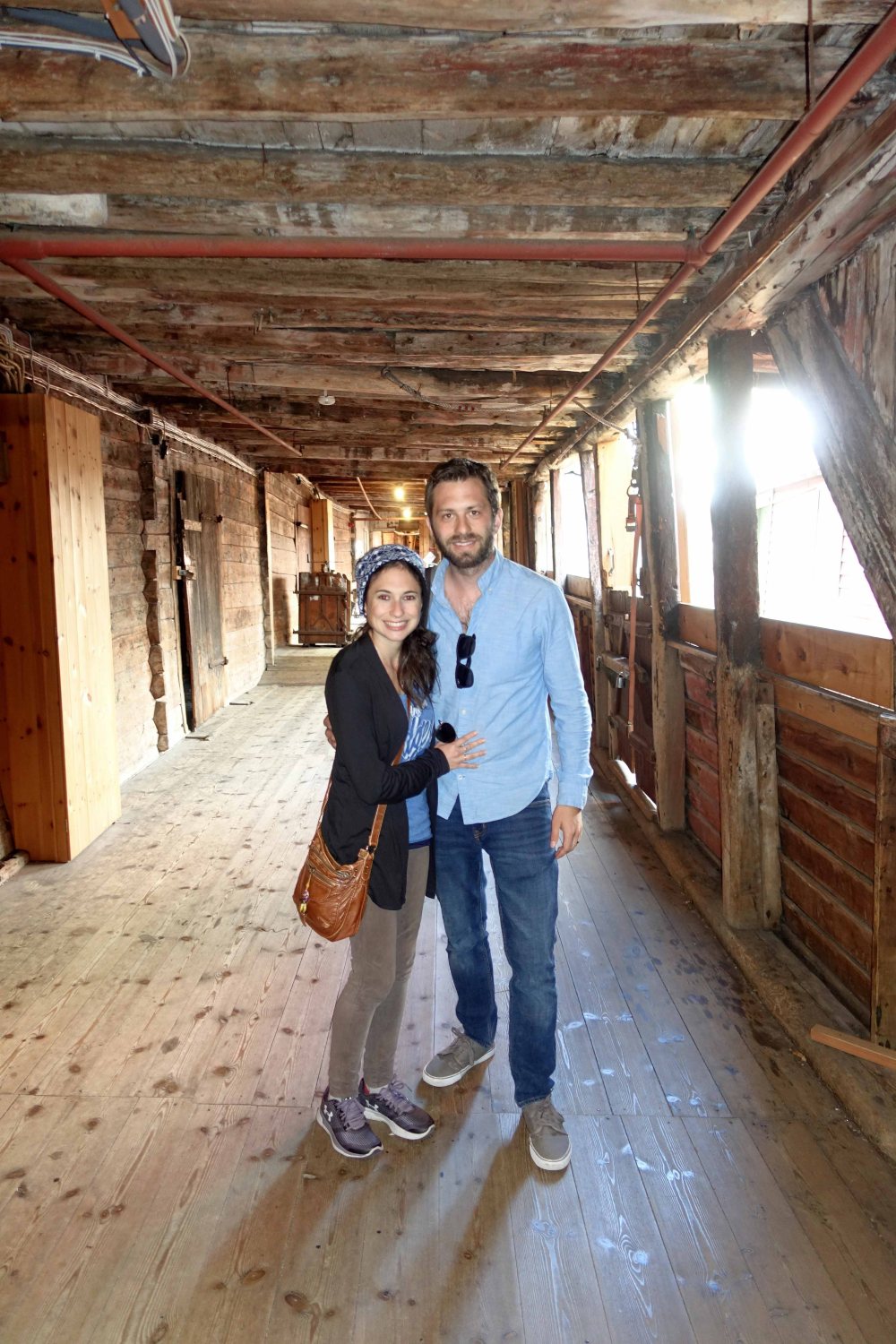 The Hanseatic League was a commercial and defensive confederation of merchant guilds and market towns in Northwestern and Central Europe. Growing from a few North German towns in the late 1100s, the league came to dominate Baltic maritime trade for three centuries along the coast of Northern Europe. It stretched from the Baltic to the North Sea and inland during the Late Middle Ages and declined slowly after 1450.

Is was fun to walk around these amazing old wooden structures. 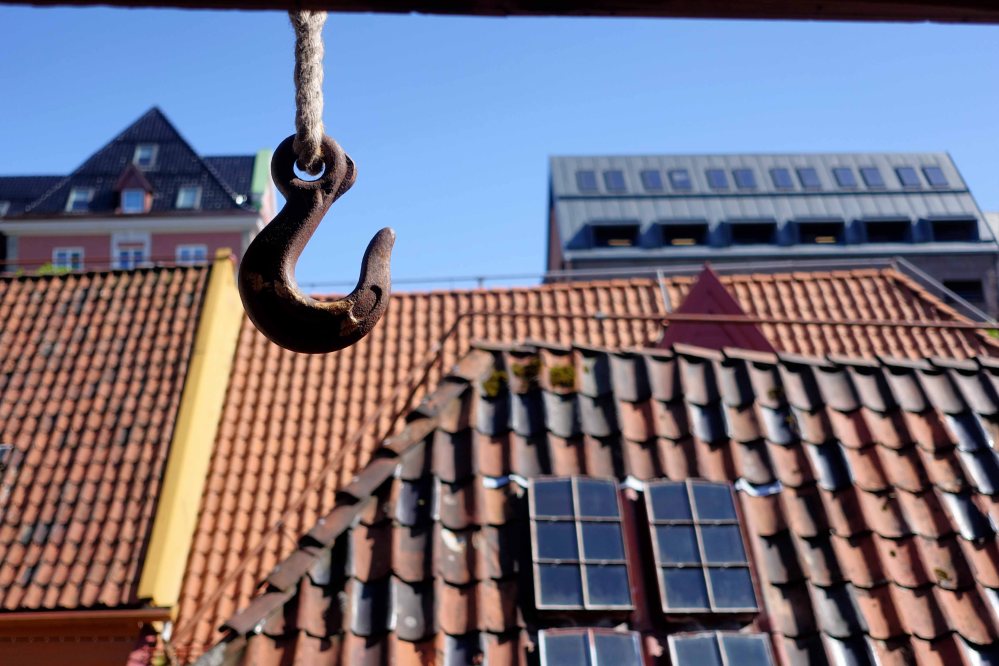 The bay was full of beautiful ships that anchored here to party! 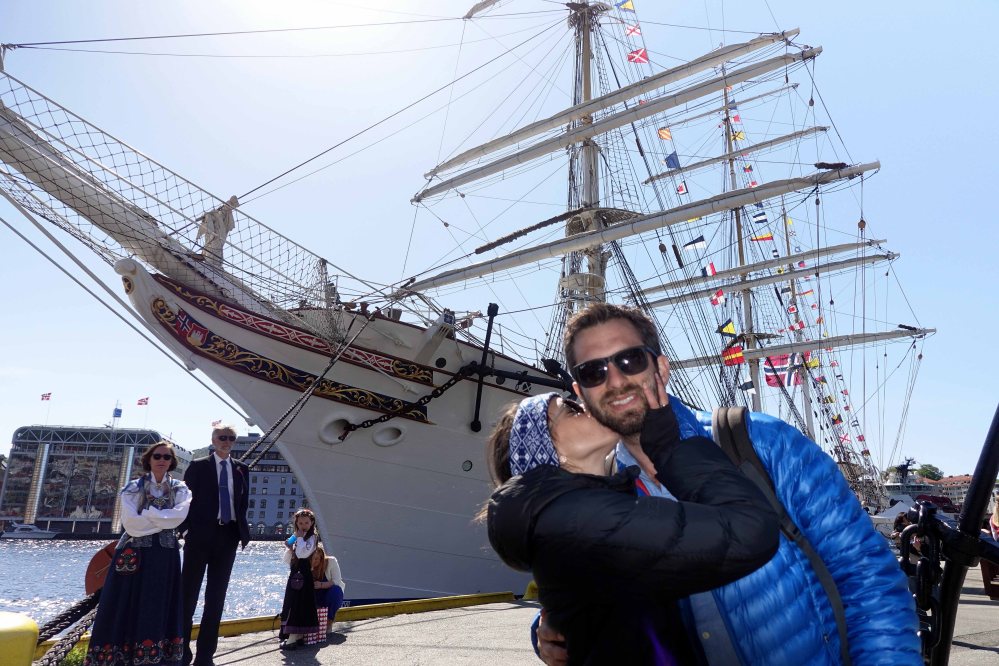 There was a small temporary amusement park. We bought tickets to ride the Ferris wheel!! 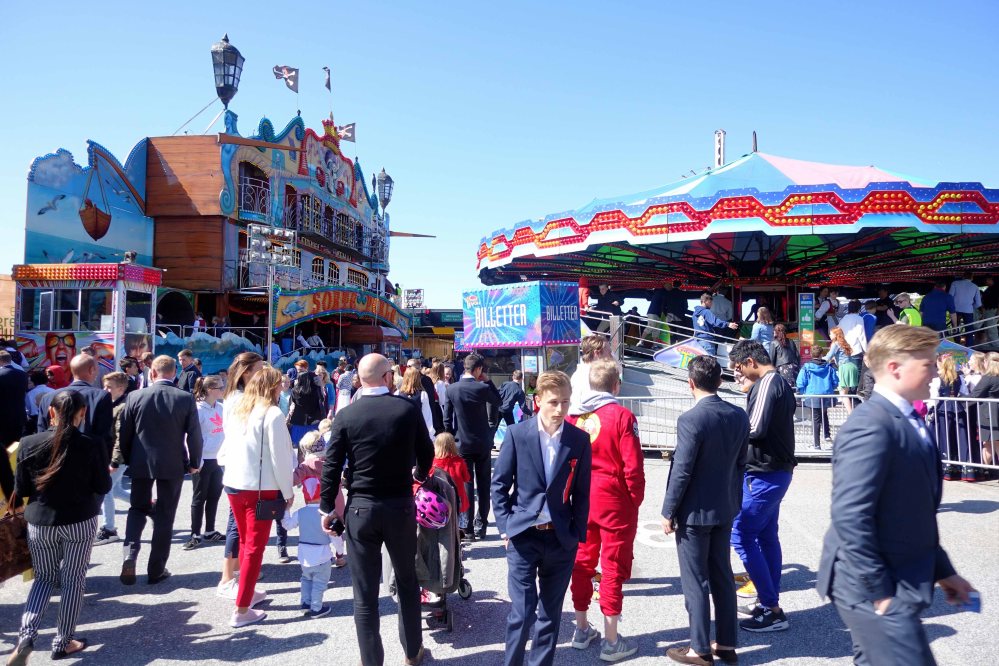 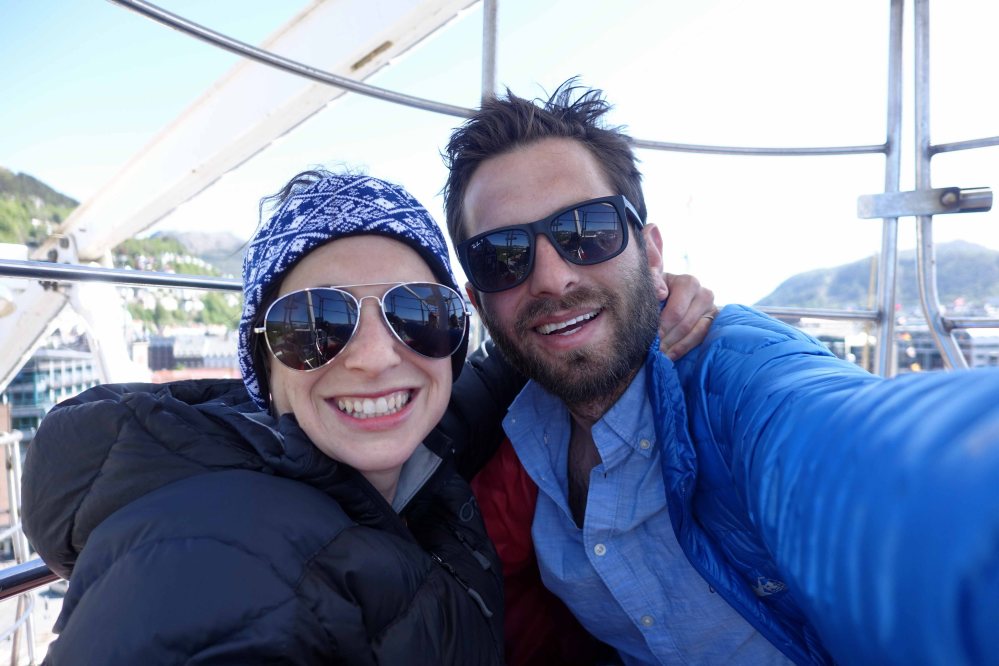 Great views from the sky!

Sarah being a tourist and taking photos with the traditional girls.

We stopped for a quick bite, an authentic Norwegian pizza.

And a candy for dessert. There is a serious lack of candy in the Nordic Countries which is very concerning. I now doubt those news articles pointing out that these people are the happiest in the world, but that is not possible without good candy. This is basically the only option for the sweet tooth, and they are pretty bad. 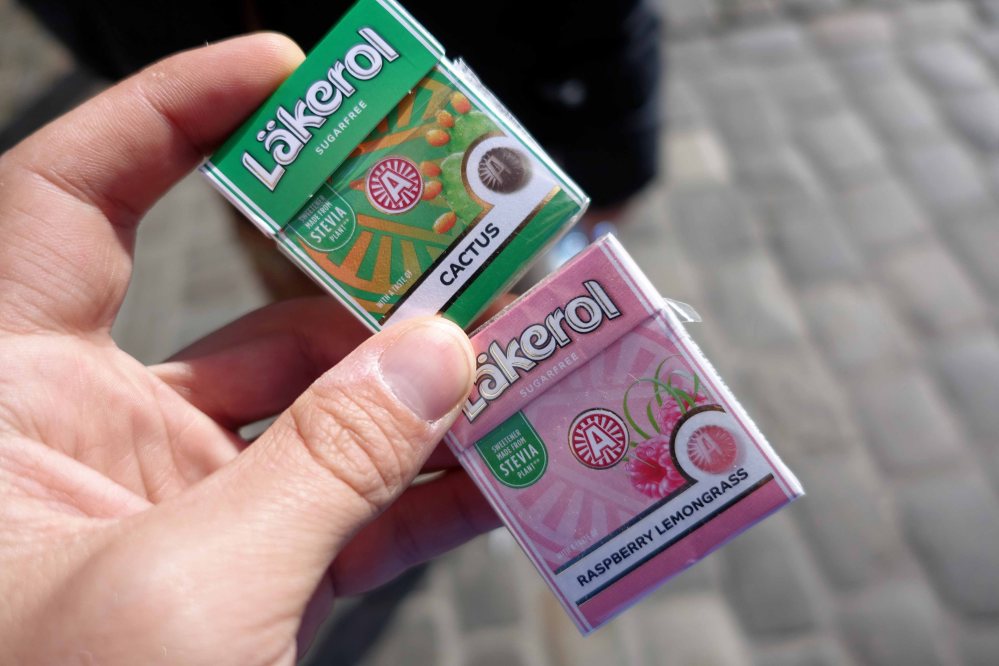 We walked back to the Bryggen area to see if there was something else happening.  Like concerts…

In an effort to try some of the traditional food, we got a Reindeer Hot Dog to try. It was really tasty.

There was this other traditional Norwegian food truck. We tried Rommegrot, or also known as sour cream porridge. This is made with sour cream, whole milk, wheat flour, butter, and salt. 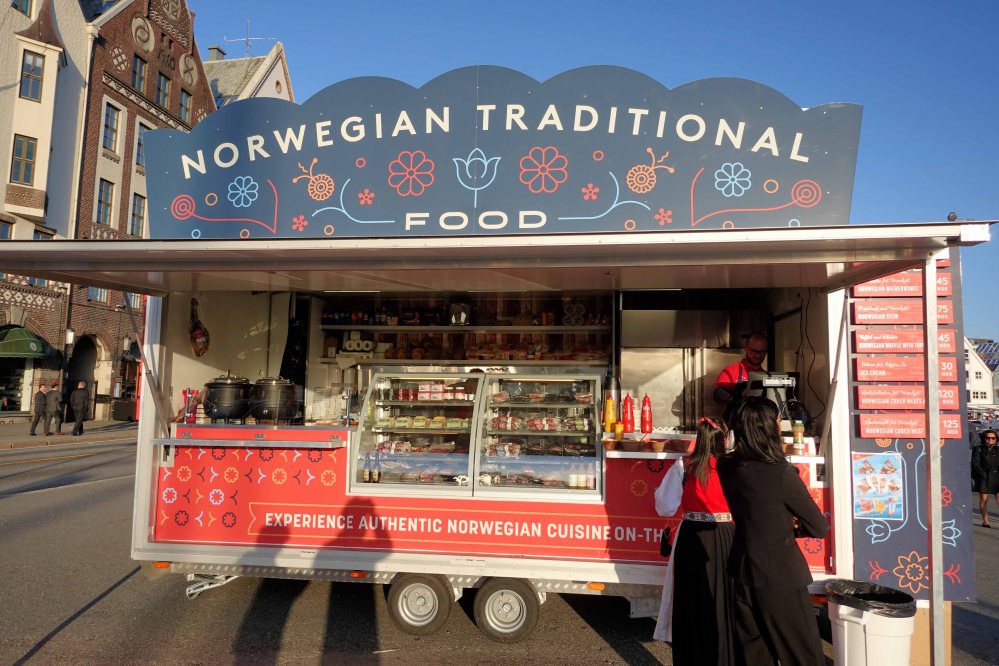 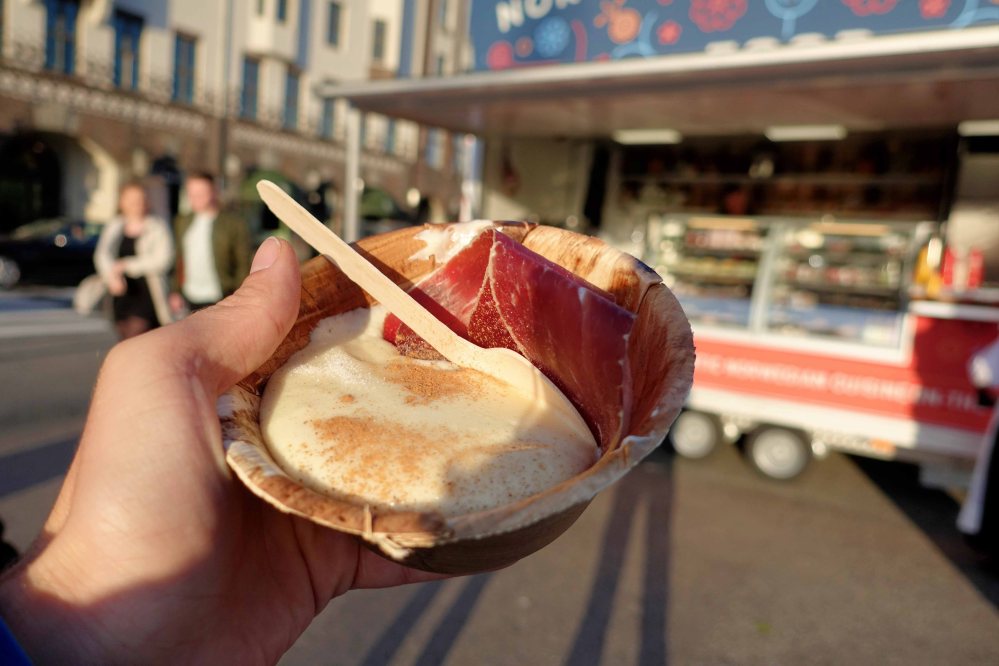 Some people cannot handle too much partying:

A One in a million photo. 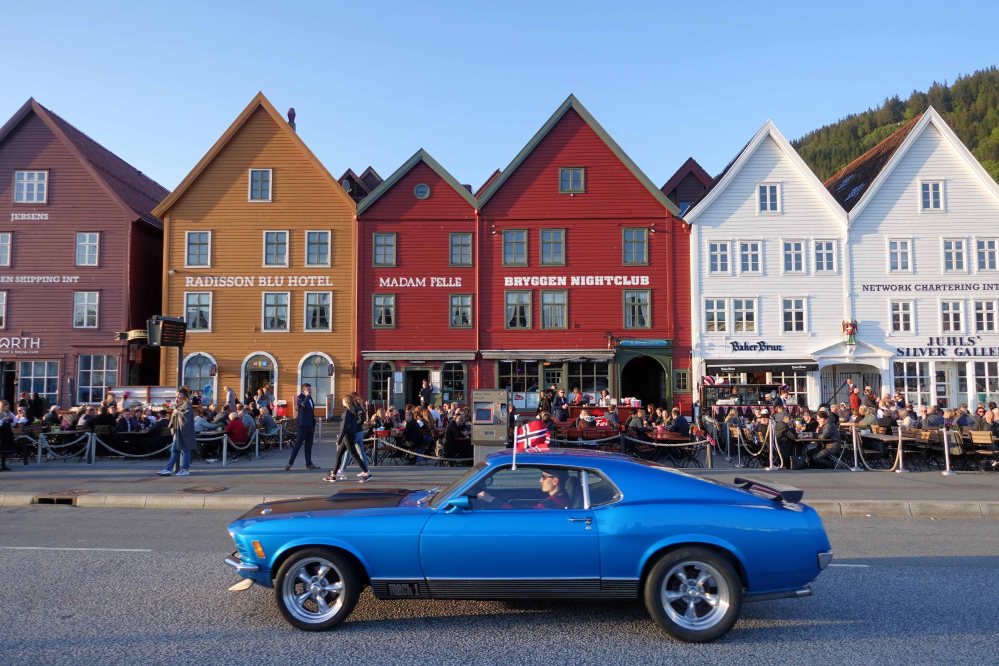 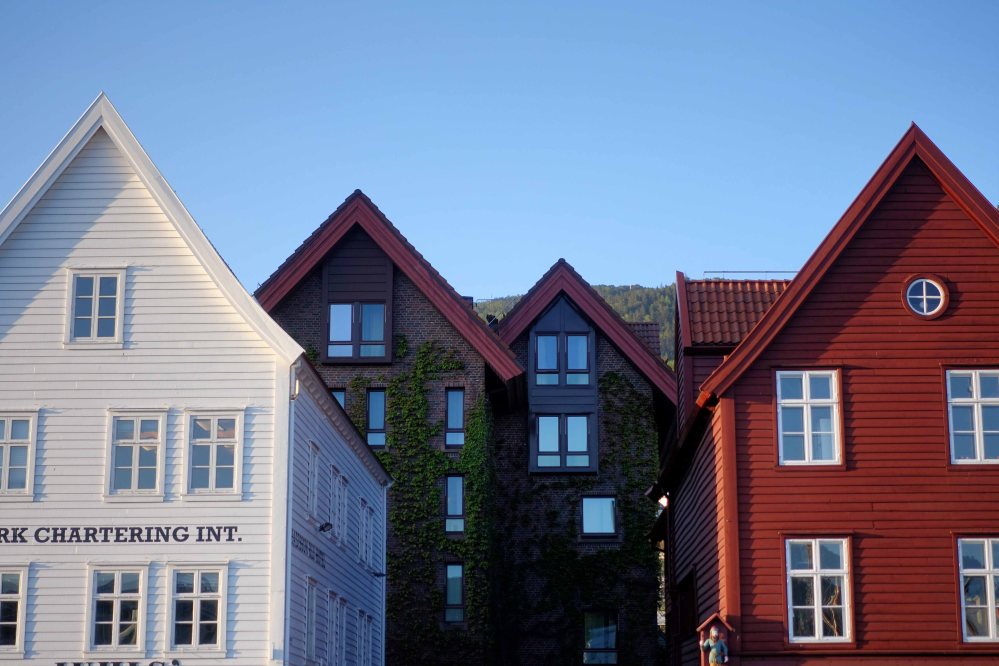 We decided to walk back to the hotel through the lake. It was still light out even though it was around 10:00 pm. 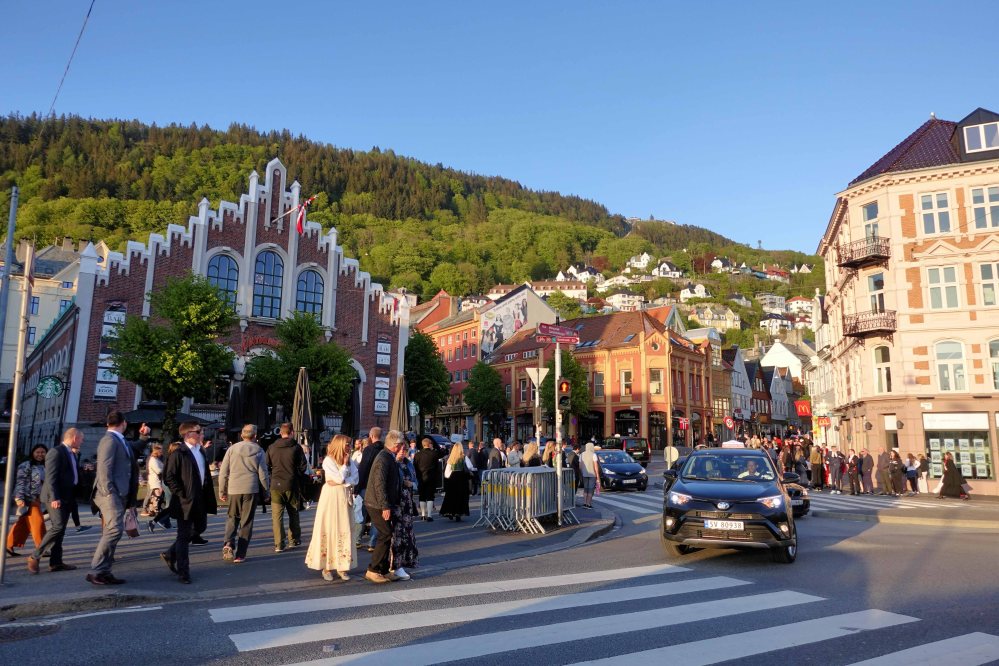 There was another concert of 80’s classics. It was a lot of fun but we were exhausted already.

The natural lake in the city center is beautiful. I had to take a photo of these 3 very Norwegian girls. 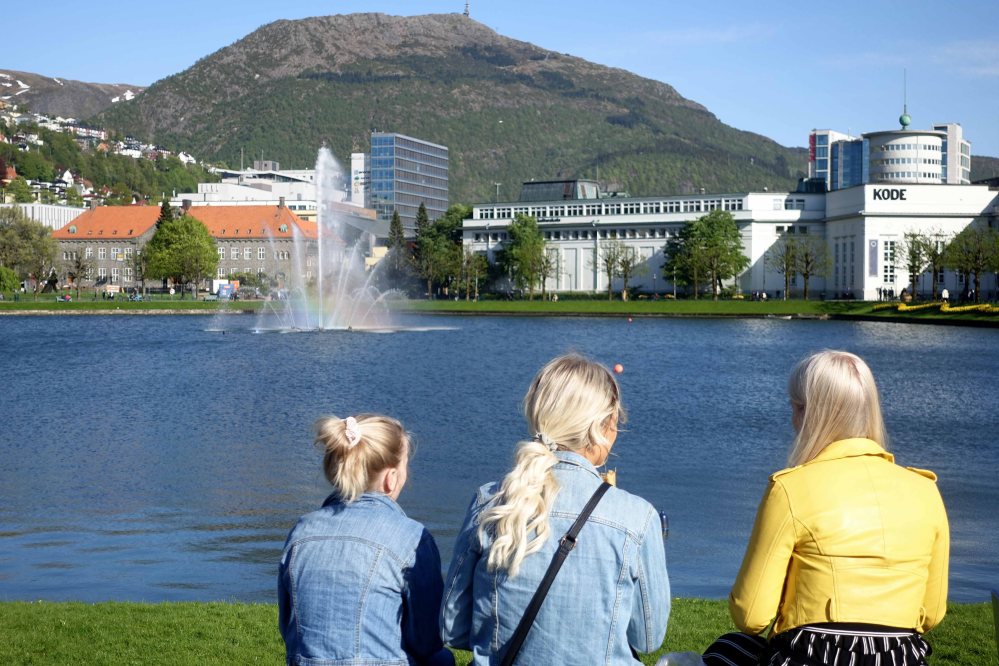 And this one who photobombed my photo. 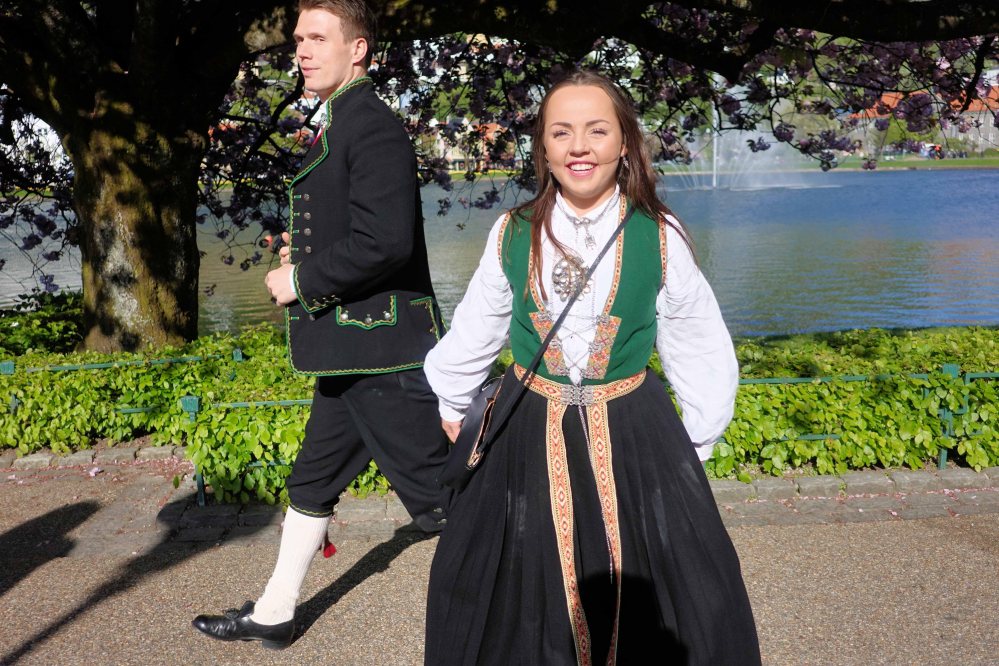 We finally made it to our hotel street. Tomorrow we will be visiting the Fjords!!! Good night.

Bonus Pic Of The Day: Everywhere we went we found trolls!  A troll is a class of being in Norse mythology and Scandinavian folklore. In Old Norse sources, beings described as trolls dwell in isolated rocks, mountains, or caves, live together in small family units and are rarely helpful to human beings. Later, in Scandinavian folklore, trolls became beings in their own right, where they live far from human habitation, are not Christianized, and are considered dangerous to human beings. Depending on the source, their appearance varies greatly; trolls may be ugly and slow-witted, or look and behave exactly like human beings, with no particularly grotesque characteristic about them.