In our third day in the beautiful state of Oregon, we woke up really to rent a car for the next three days. After some research, Eitan noticed that renting a car 15 minutes away from the city center was $150 cheaper than renting it at the airport. We took an Uber to pick up the car and after a huge line (it was a long weekend) we were off to the Columbia River Gorge.

We drove on the I-84 for about 1 hour until we reached Vista House. This place is a museum that also serves as a memorial to Oregon pioneers and as a comfort station for travelers on the Historic Columbia River Highway. 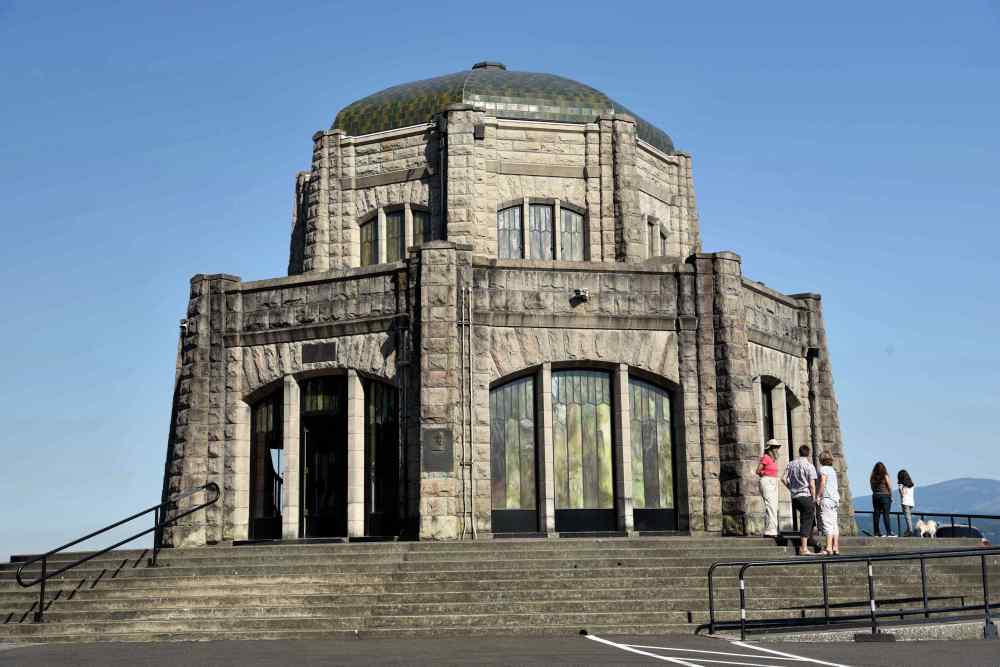 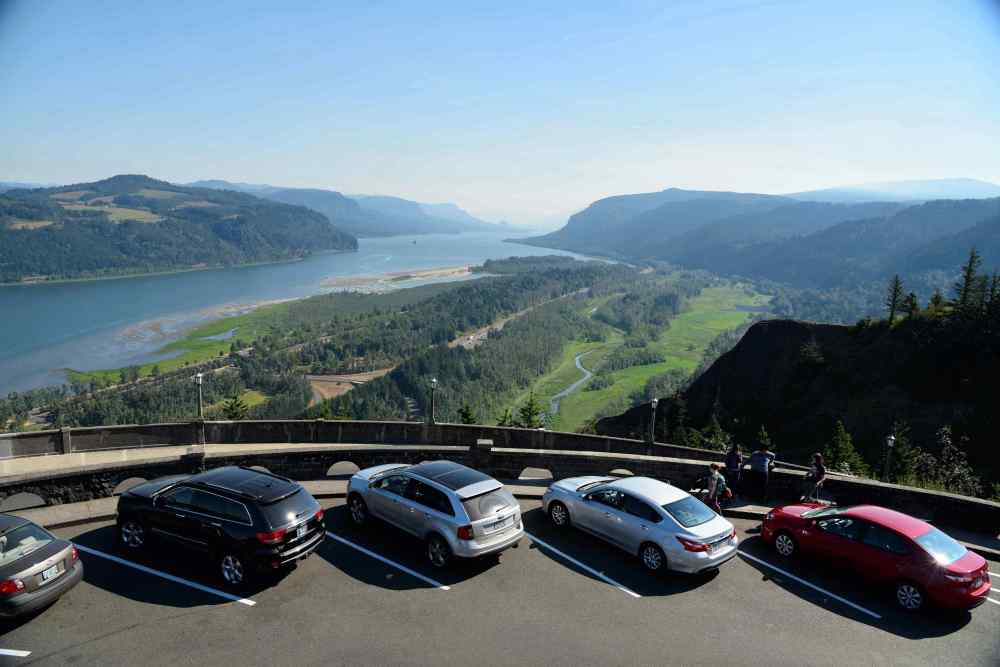 The next part of the day was full of waterfalls. The first one was the Latourell Falls, with a height of 249 feet. We started hiking all the way up, but when we realized it was going to take way longer than what we expected, we came back down instead to get a closer look.

The view from the bottom was nicer. It was hard to get a photo without other tourists in it. 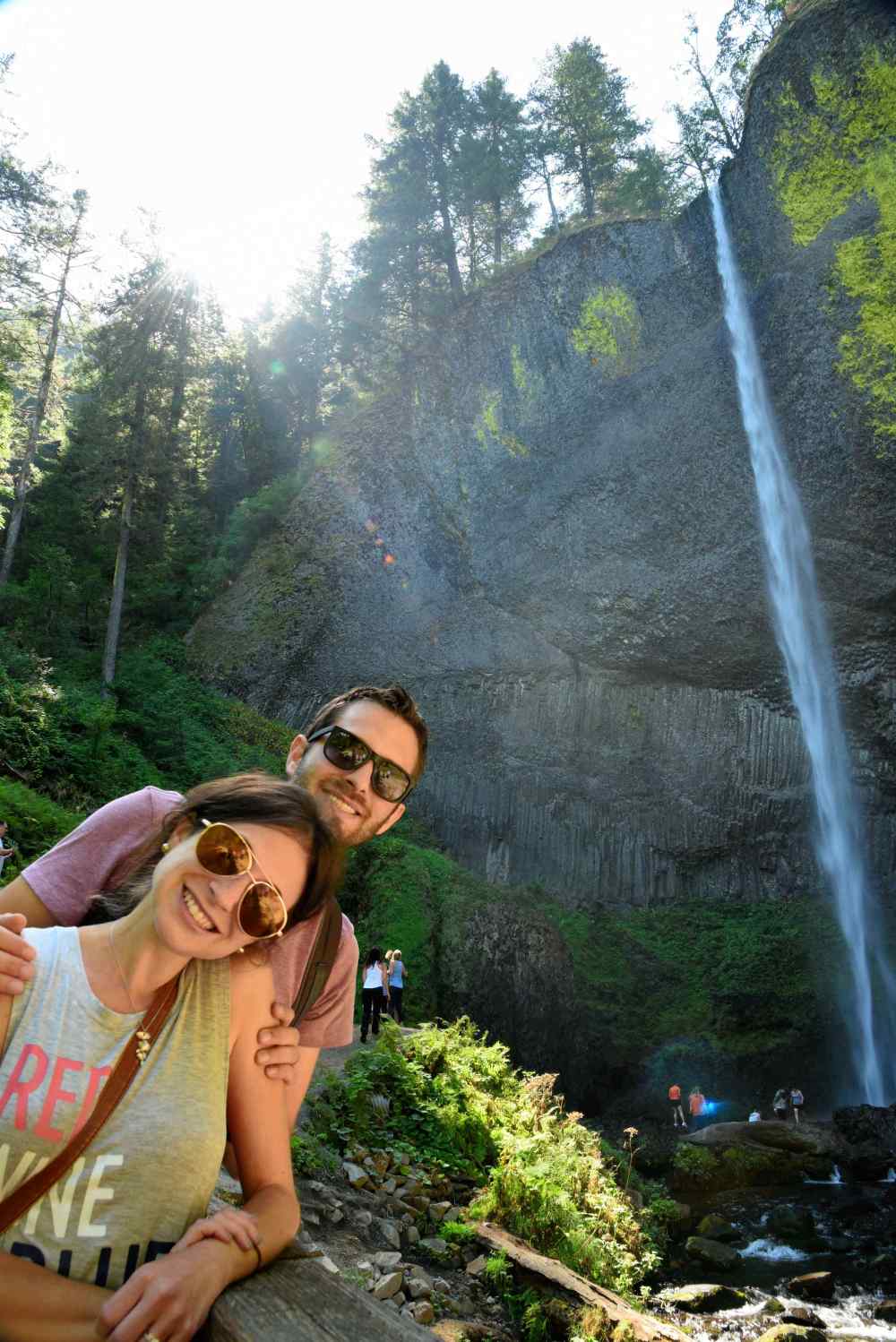 We drove to the next one,  Wahkeena Falls, which was shorter and less impressive but without any tourists.

Parking around these waterfalls is a nightmare, so when we found a parking lot in the previous waterfall we decided that we would walk to the next one as well. It was only 1 mile away, but the traffic was moving slower than us!

We arrived to the most famous of them all! The Multnomah Falls. With a height of 620 feet, this one is the most impressive. They have a beautiful wooden lodge at the entrance with a nice snack bar and ranger station.  This cabin was almost lost in the recent fires that started just one day after we visited so we felt extra lucky we got to go this day.

Underground springs from Larch Mountain are the year-round source of water for the waterfall, augmented by spring runoff from the mountain’s snowpack and rainwater during the other seasons.

We walked the short trail until we reached the bridge. Many, many, many tourists, some smelling like 5-day-old-ran-over-raccoon made this part of the visit extremely uncomfortable. A few photos here and there and we were back to our parking spot to continue our River Gorge visit.

The first town we encountered was Hood River, super cute little place where wind sports like windsurfing are extremely popular. We walked a little bit until we found a restaurant with good reviews. 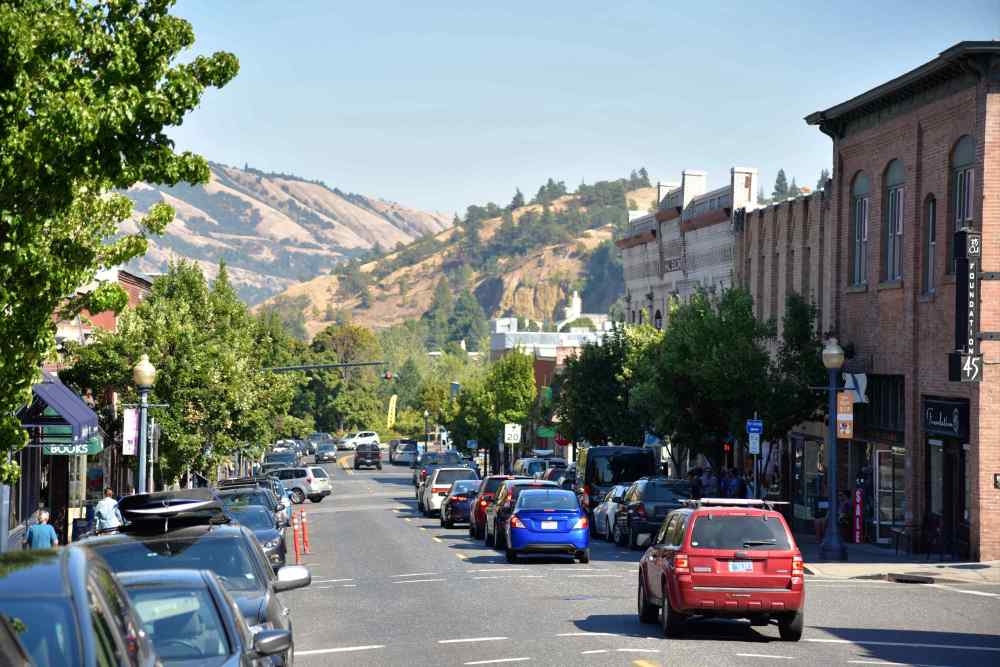 After a coffee break, we were back at the road heading to Mt Hood.

We started passing a lot of orchards, which Eitan quickly discovered  were not flower (orchids), but fruit growing farms. Sarah made the executive decision to stop in one of these because they looked so cute and luckily we stopped at the single last one on the road.

They even sold chilies!

They had a beautiful backyard with nice views of Mt Hood. 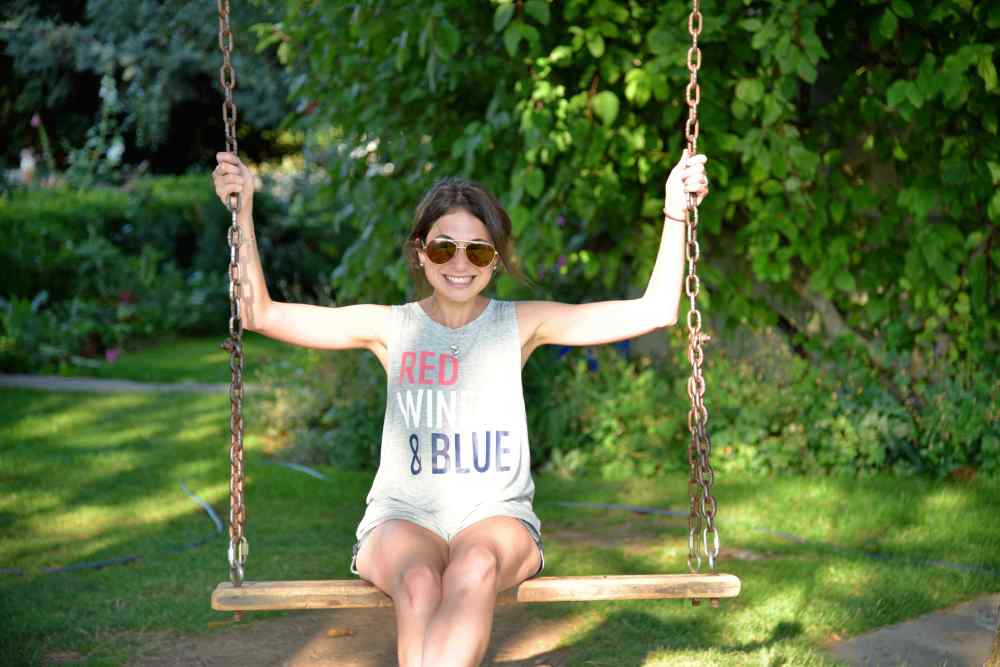 We bought natural pear cider. It was not pasteurized so the shop lady warned us to drink it fast or we will die!! it was delicious. 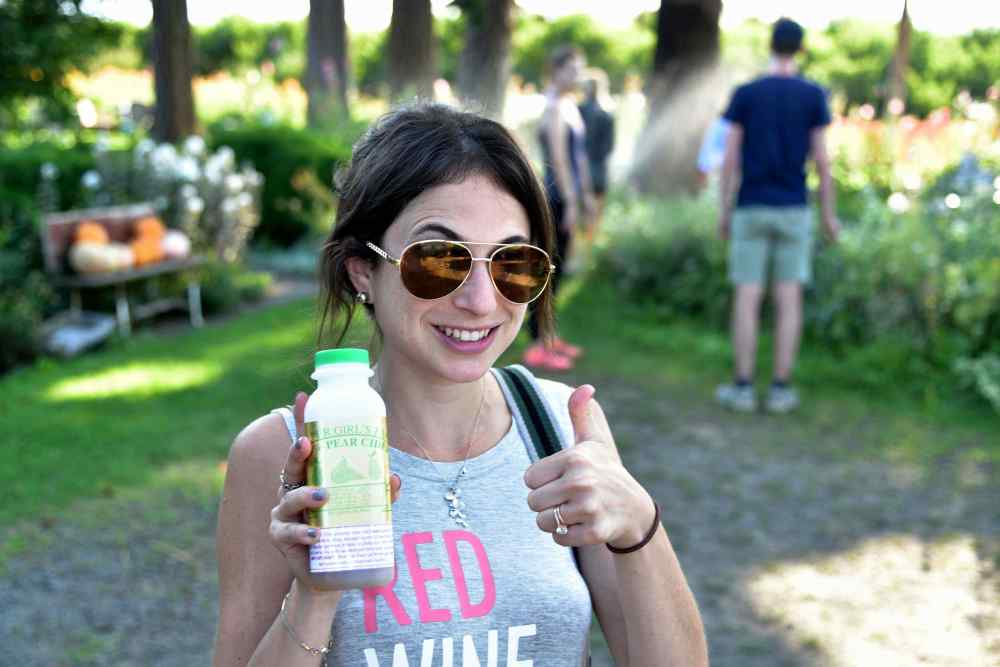 On the way to Mt Hood, we stopped at Trillium Lake, Eitan read somewhere that there are great views of Mt Hood from here: 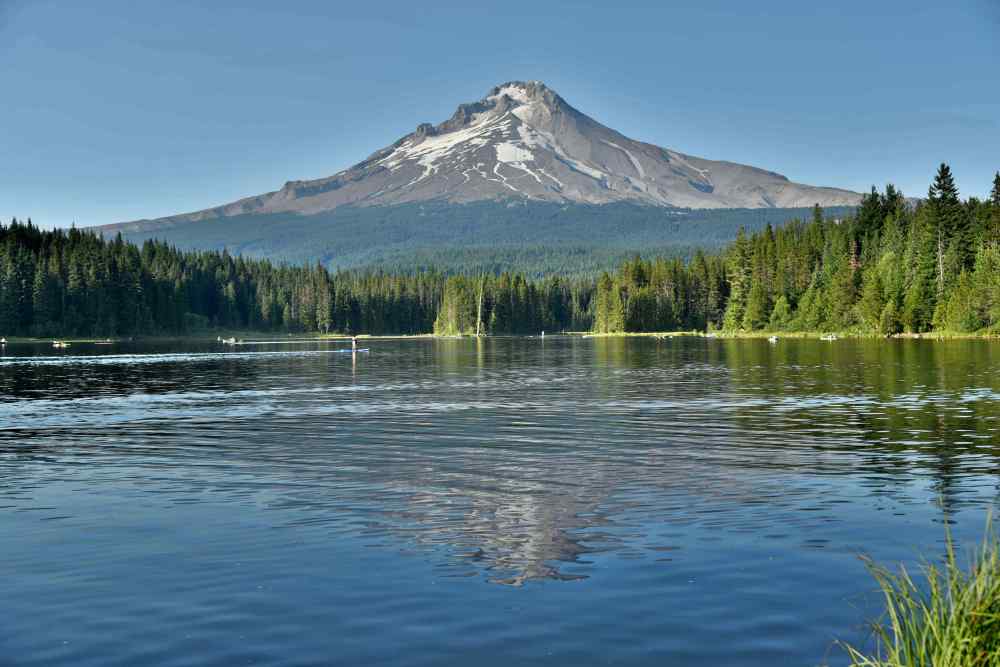 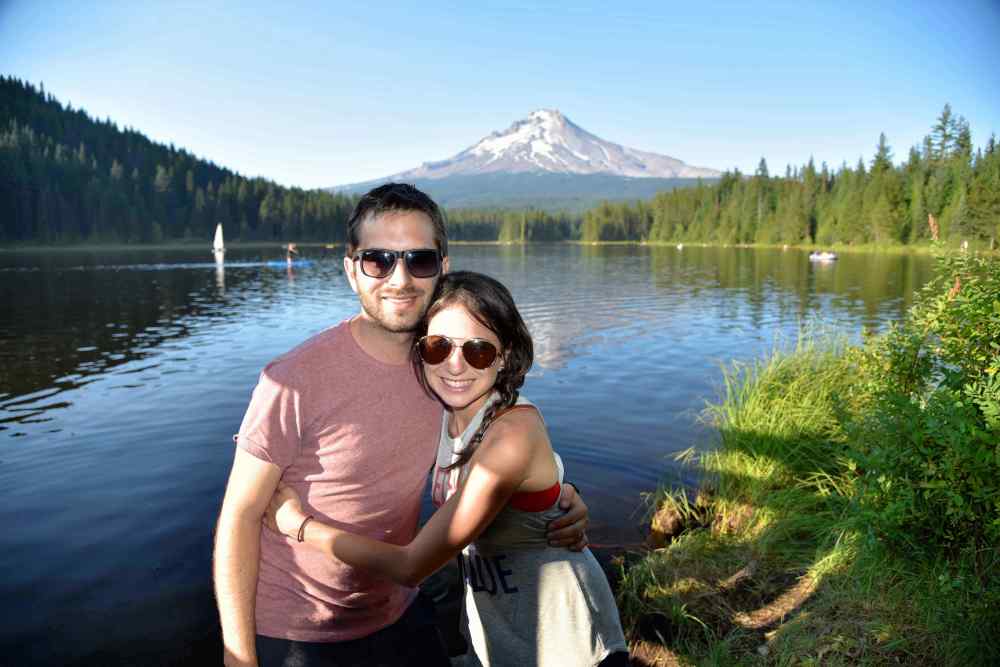 It is the highest point in Oregon and the fourth highest in the Cascade Range. Mount Hood is considered the Oregon volcano most likely to erupt, though based on its’ history, an explosive eruption is unlikely.

This lake happens to be a campsite as well. It is probably one of the most beautiful campsites I have ever seen and we promised to come back one day!

We drove to the base of Mt Hood along a beautiful road with stunning views. Eitan stopped a few times for photos while Sarah stayed inside the car regretting allowing Eitan to buy his new fancy camera.

We got to the base of Mt Hood where the beautiful Timberline lodge is located. We tried to book a room here, but the rooms were very expensive due to the long weekend. The lifts were already closed so we just walked around the hotel.

Timberline Lodge was dedicated September 28, 1937, by President Franklin D. Roosevelt It is notable in film for serving as the exterior of the Overlook Hotel in The Shining.

Even the mailboxes were cool vintage looking.

There was a wedding happening there!

The view of the mountains was breathtaking. 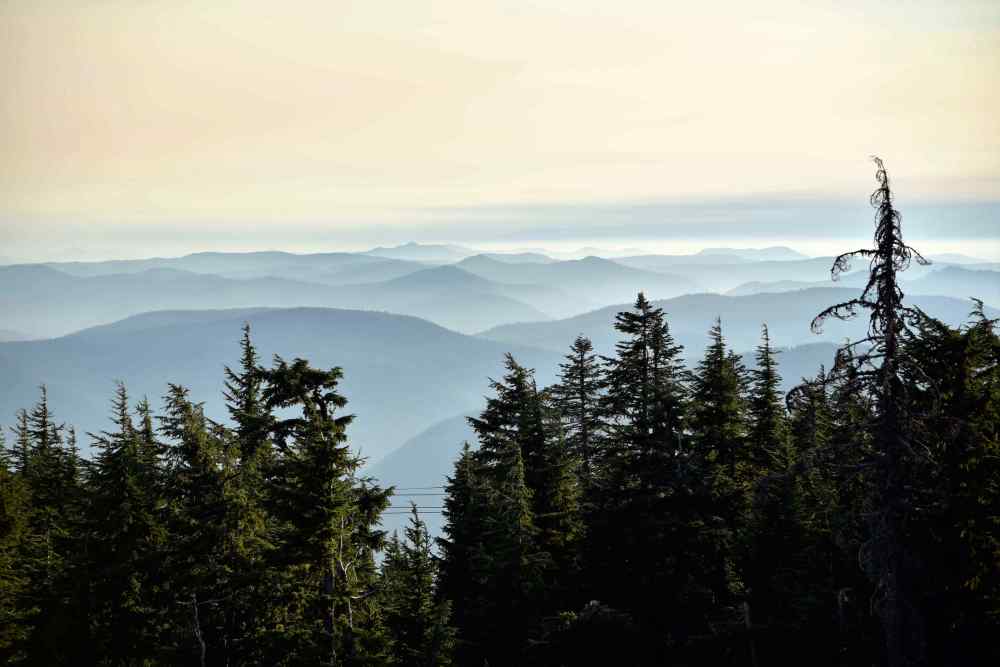 It was getting dark and we were hungry , so we headed back to Portland. 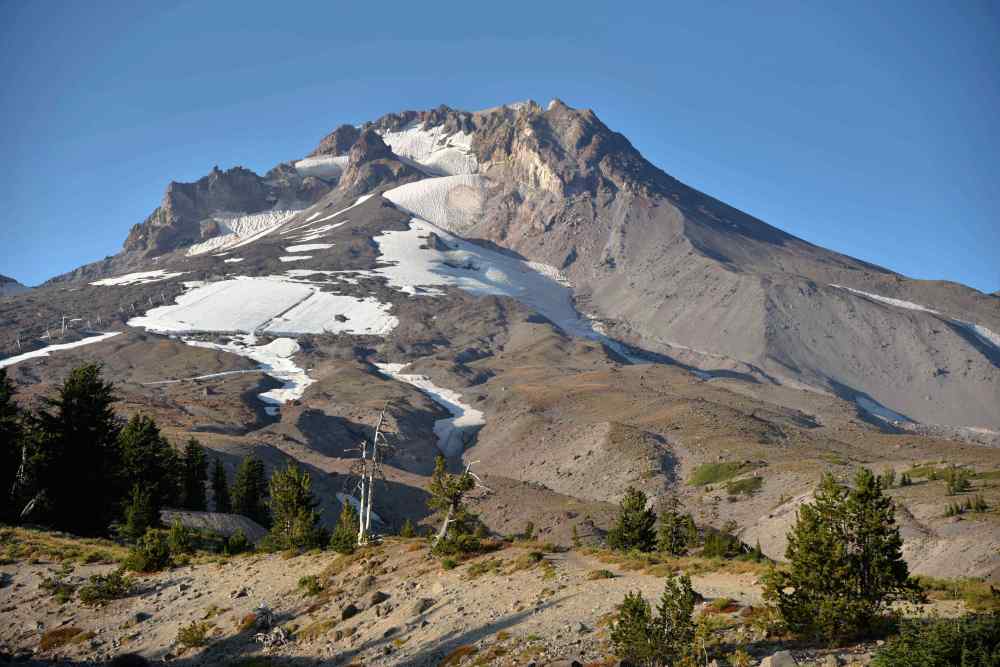 We stopped at a really nice viewpoint a few miles away from Portland, the sun had already set so the lighting was not ideal. But we could still enjoy one more time the beauty of Mt. Hood. 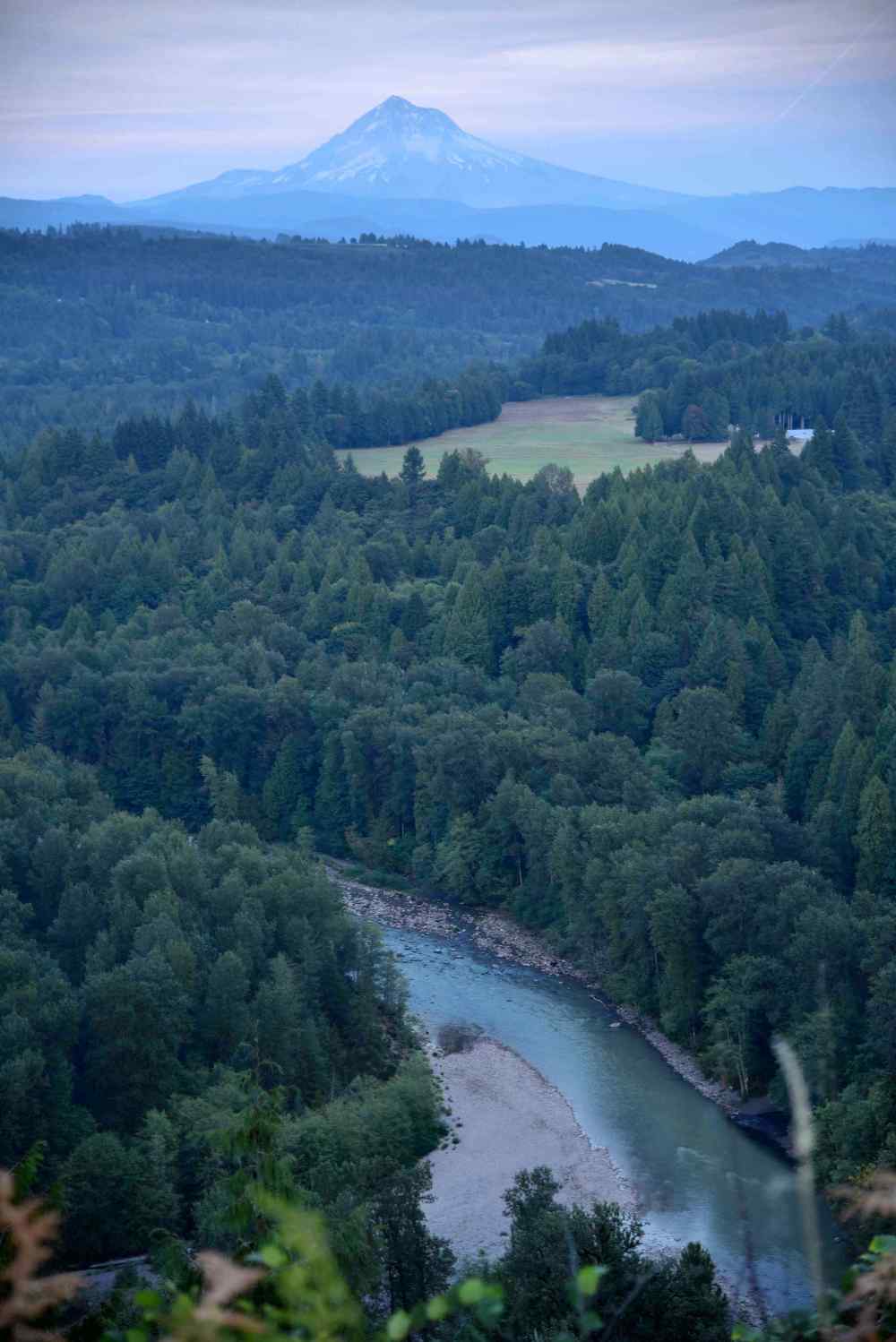