On the way to Lisbon we stopped at the magnificent Almendres Cromlech, a megalithic complexhe largest existing group of structured menhirs in the Iberian Peninsula (and one of the largest in Europe), this archaeological site consists of several megalithic structures: cromlechs and menhir stones, that belong to the so-called “megalithic universe of Évora”

These are 5,000-8,000-year-old Neolithic stone monuments the purpose of which people continue to argue about. We took a dirt road and then walked a path in the 110-degree heat. The first one we came to was a single 7-foot stone standing alone. 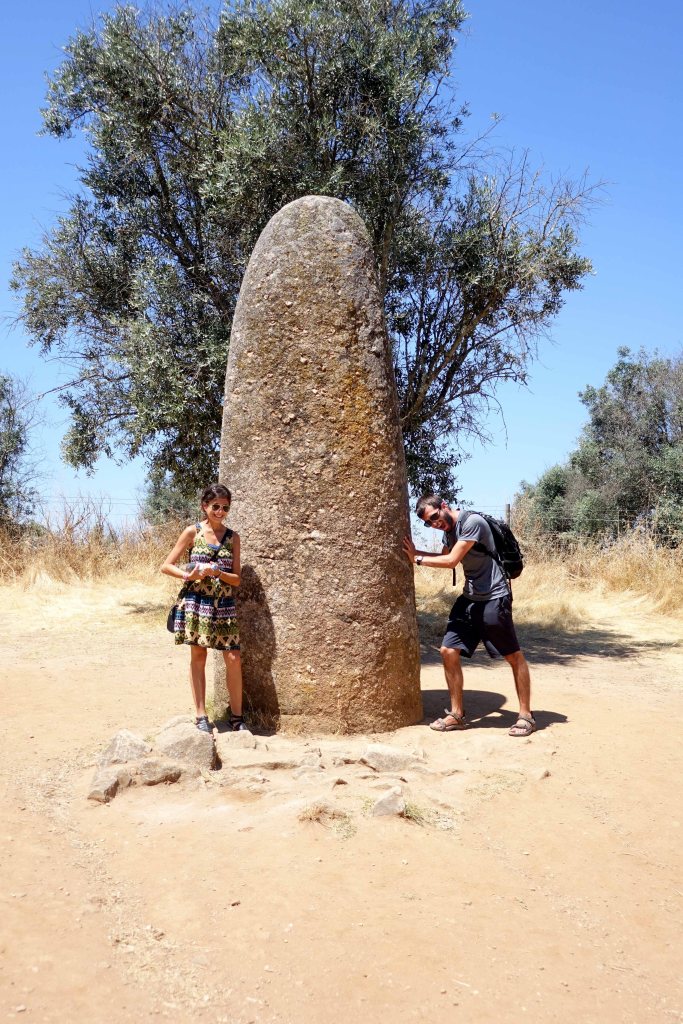 We then returned to the car and drove to the other site, an impressive slope of around 100 stones of varying large size, a few with carvings on them. This was very eerie and so incredibly old, making Stonehenge seem like recent construction.

Spending time with something so ancient seemed a fitting final stop for our journey which, in a sense, were largely an exploration of mankind’s varied imprint on the planet over the centuries. 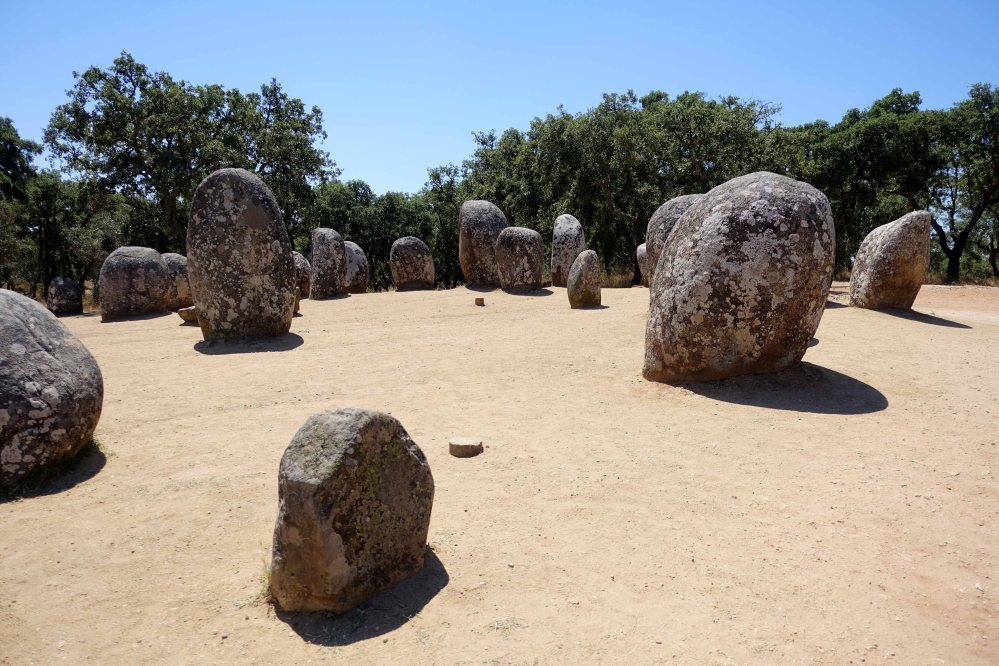 The construction of these structures date back to the 6th millennium BC. They were rediscovered in 1966 by Henrique Leonor Pina, who was proceeding with field work relating to the country’s geological charts.

It is believed that the monument had a religious/ceremonial purpose, or functioned as a primitive astronomical observatory.

Another hour and a-half to Lisbon, where we crossed their clone of the Golden Gate Bridge. However, this one was designed without pedestrian access because of the suicide problems San Francisco’s version experienced from the beginning. 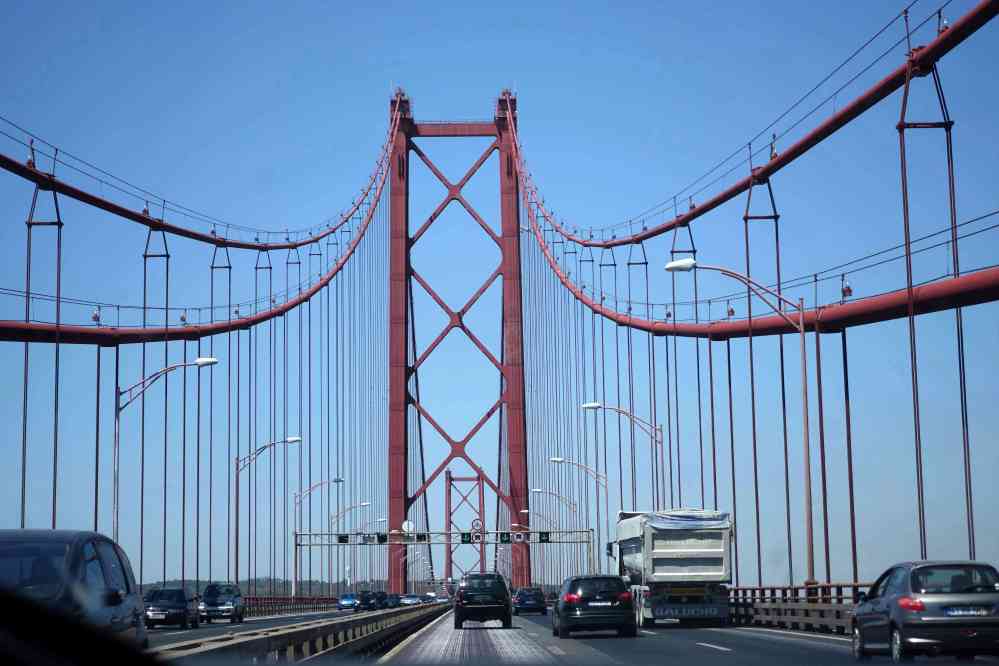 On exiting the bridge, Dan drove into a gas station to fill the rental Peugot. Upon leaving the station, he was quickly pulled over by a motorcycle cop! Apparently, he had gone through a red light. In Dan’s defense, the traffic lights in Portugal are problematic because they are only on the curb side of an intersection. If yours is the first car at the crosswalk, it is nearly impossible to even see that there is a light, let alone what color it is. The cop asked Dan the name of our hotel. He responded that it was the Britania and this seemed to satisfy the officer and he let us go. This was a big relief, but it exposed Dan to more ridicule from his sooo respectful son-in-law.

With no more excitement, we got to the hotel at 3:00. We treated ourselves to the port wine that was always available in the lobby and then organized the bags with regard to the ceramics we’d be bringing home.

Our rooms weren’t ready, so we walked off in the manageable 95-degree weather to the Alfama, which was once the Jewish quarter and is now known for restaurants where fado songs are performed. Fado music typically consists of mournful songs about loss and longing, often connected with sailors departing for the sea, often to never return.

We stopped at a restaurant for a snack around 5:00. Eitan used this opportunity to look up the Portugese airline on which Elly and Dan were flying home, SATA, and found negative reviews that he used to torture Dan, which, as intended, succeeded in getting Elly concerned about the flight quality. Nice one, Eitan. 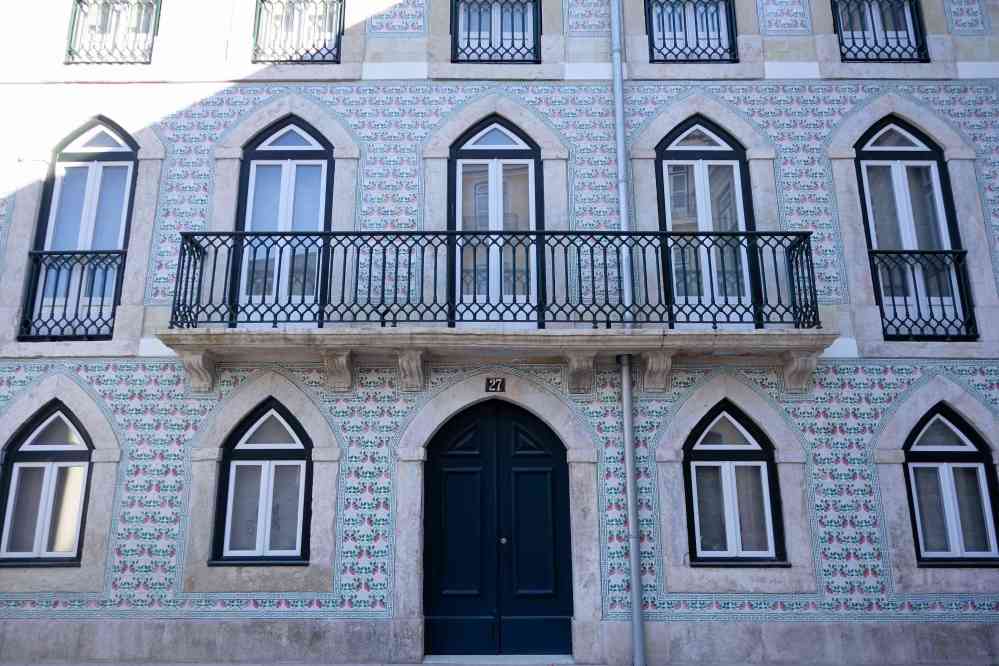 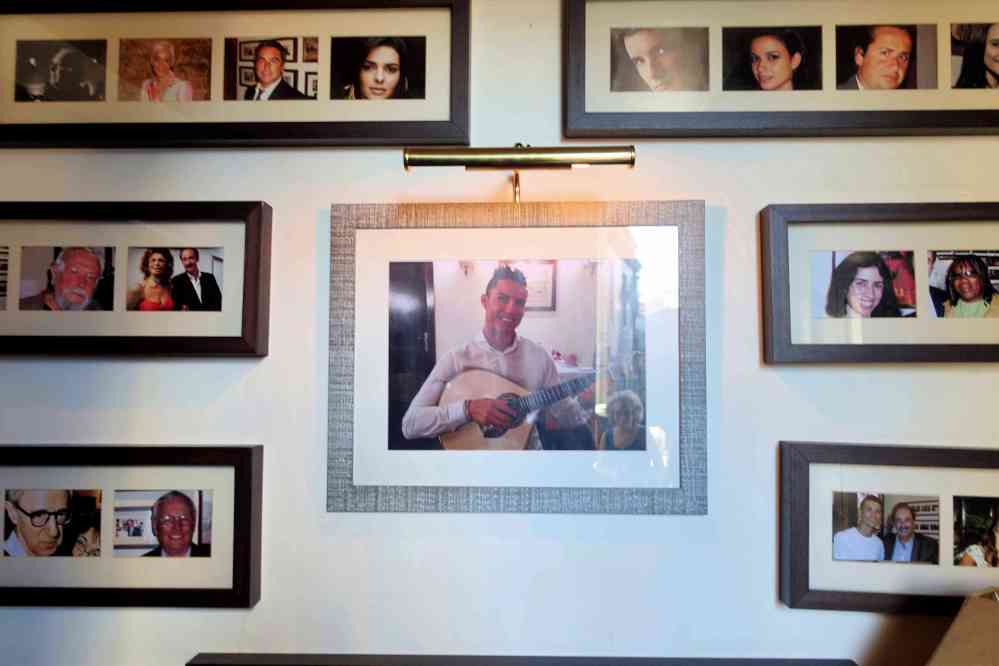 We initiated our hunt for The Final Restaurant. First, there was a very overpriced tourist one. Then a nice-looking one with 2 stars on Trip Advisor. Then another with 1 1/2 stars. A few more until a 4-star that Elly thought was cute. We strolled to the water, then back to the restaurant at 7:30 as people were just starting to fill the place.

We had a cheese plate and wine. Elly toasted how wonderful the trip had been for us. Sarah toasted and choked up, especially when addressing what traveling with Eitan had meant to her. This was a beautiful, emotional moment, which of course confused Eitan.

Sarah and Eitan ordered a carafe of house red wine and Elly got a half carafe of white wine and quickly guzzled most of a glass. Funny thing about Elly: She rarely drinks and when she does she sips it and barely finishes it.  But on certain occasions with certain white wines, she tips back the glass with amazing speed. This was one of those occasions, and in not much time she was flying high, with most of the carafe almost gone. You can see Elly defending her glass from Dan.

Fortunately, she was (a) eating and (b) Eitan made her stay hydrated by drinking water. So, she stayed healthy. At 8:00, the performers started, a guitar player and a mandolin guy. They were successively joined by a young lady singer, a guy singer, a waiter and then an 81-year-old woman who brought the house down. Luckily, we couldn’t understand the words, so we didn’t know fully how depressing the songs were. 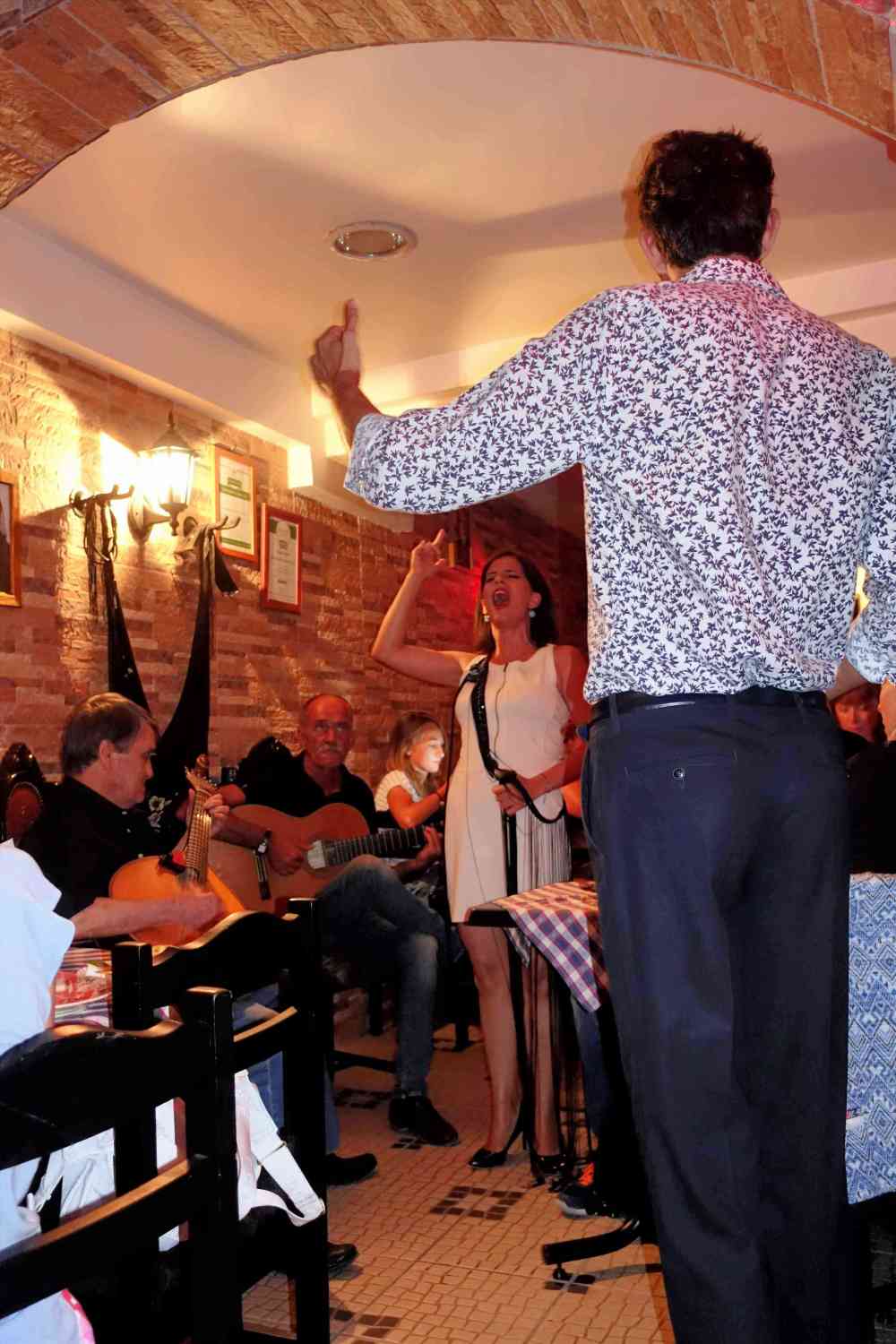 There were more toasts to the trip, involving more emotion, causing more confusion for Eitan.

Around 9:30, we were ready to depart, but found out they only took cash. This required a trip to the ATM and then this last trip moment was done.

We had about two miles to walk back to the hotel. Elly was only a little unsteady but overall in pretty good shape. She kept entertaining us by very happily, and a bit loudly, talking about how we had picked the very best restaurant and it was an absolutely wonderful night. Inebriated Elly is extremely fun company.

Back at the hotel, there was final packing and organizing. Eitan valiantly tried to load movies onto Elly’s iPad for her now-dreaded SATA flight, but it didn’t work. On one of Dan’s visits to the Sarah and Eitan’s room, he discovered that one more trait that he and Eitan shared was an appreciation of ExOfficio underwear.

Sarah visited Elly and Dan’s room for a final goodbye, since they would be leaving for the airport at 5:00am. Everything that could be said had been said and there were hugs and comments on the weirdness that we would next see each other in Glendale, California, with plans for breakfast the next day at the exceptional International House of Pancakes.

And so, the grand travels came to an end.

Elly and Dan felt very fortunate. They had the sense that, even if they weren’t underwriting the Morocco/Portugal phase of The Great Honeymoon, Sarah and Eitan still wouldn’t have minded their company. There are trips and events in life that are very anticipated but still manage to exceed even the highest expectations. For Elly and Dan, this was one of them.

Bonus Pic Of The Day: A picture is worth a million words. (Sarah just mentioned: “aaah! that picture makes me nauseous”)

Sarah’s turn to chime in since as you may have noticed Eitan wrote basically every blog and my dad contributed for the last two countries of the trip (thank you great writer Dad!).  Without sounding too cheesy, I just need to formally document a thank you to Eitan in the blog.  This trip took him about two years  with many very focused late nights to create and more focused late nights on the trip to ensure that everything went smoothly and this was all done not by me.  And it really did go smoothly, its amazing!  Of course some memorable bumps along the way, but they made for great stories.

So I just want to thank you Eitan, Guaps, Travel Partner/Tour Guide/ Husband for an adventure and experience that I really do think has made me a more knowledgeable, culturally sensitive and  a smarter person.  I also am a little mad at you because I can’t read this blog without tearing up because I truly have officially developed a disease we now share, the travel bug.  I guess that just means you get to write more blogs because we definitely will not stop traveling together!! 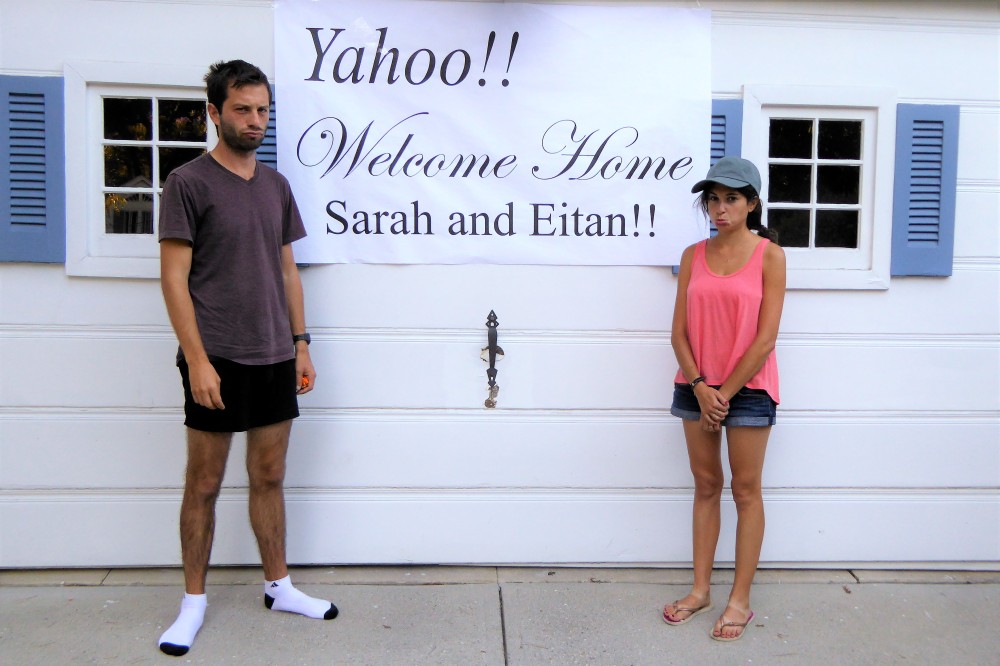