After touring the Hassan II Mosque, we boarded our van for the true Morocco Adventure. The fact is that, regardless of the famous movie of the same name, Casablanca is one of the less interesting places to see in this country, so we quickly headed out to explore a country that Sarah and Eitan soon decided was like “a good India,” i.e. it has all of India’s exoticness, but without the filth, scams and inefficiency.

We went to the town of Meknes, which has four concentric defensive walls, a bit like driving into a maze, where for lunch we shared a whole chicken for $10. 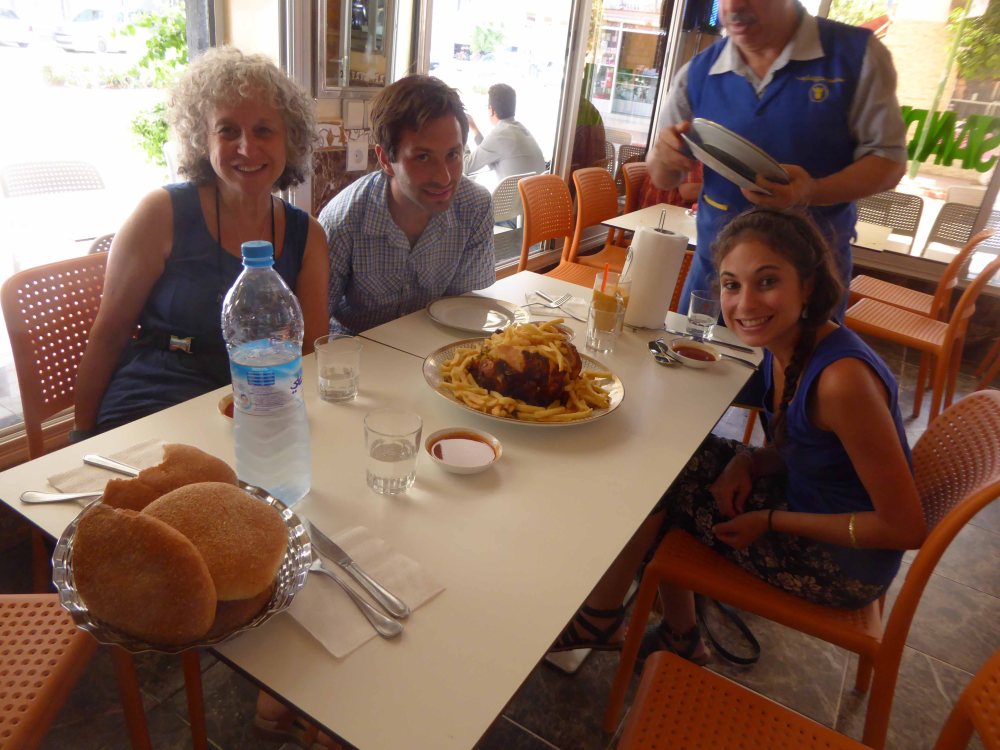 Morocco is also something of a travel bargain, especially in July, which is the low season due to (surprise!) the heat. Most days were in the high 90s/low 100s, but extremely dry. It rarely felt oppressive, but we were always happy to get into the air-conditioned van, much to the amusement of Hassan and Mohammed, who seemed to feel that 100 degrees was akin to a fine spring day.

In Meknes was one of the 27 palaces belonging to the current king, Mohammed VI. Yes, 27. All of them are used, and none of them are open for tours. All of the ones we encountered were on enormous grounds enclosed by high walls. 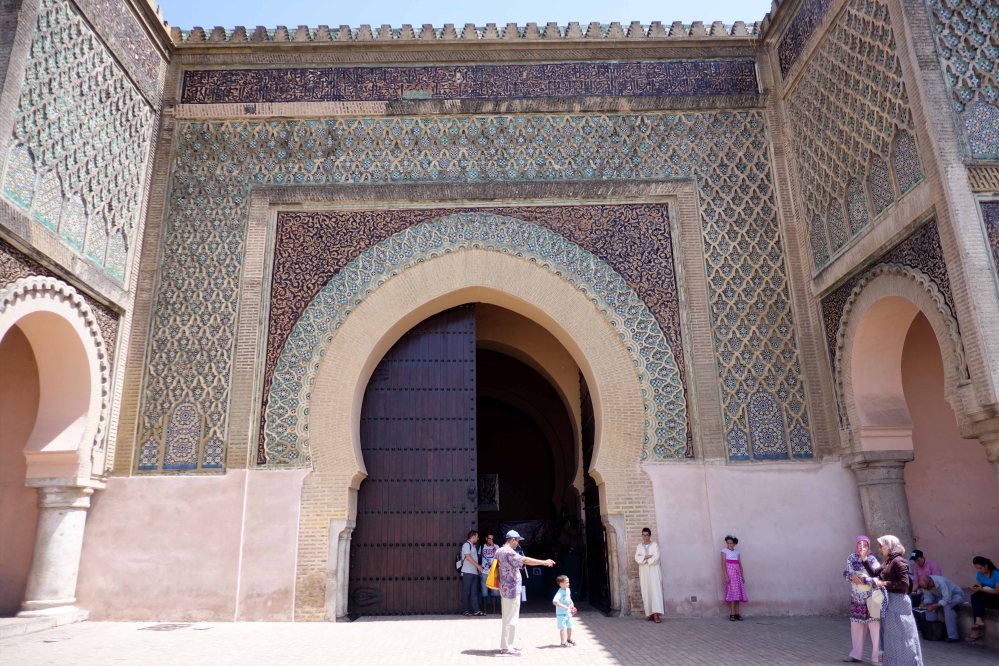 As off-putting as this may sound, it appears that Mohammed VI is quite an enlightened leader who has advanced the nation and, importantly, worked to remove Berbers from second-class status. Berbers (from the Roman word for “barbarians”) are not Arabs and were forced to convert to Islam 1000-plus years ago. They outnumber Arabs in Morocco and across North Africa, and have their own language and culture. Hassan and Mohammed are both Berbers. Mohammed VI’s wife is Berber, which is a very big deal. Of course, this all flies in the face of the common knowledge that all Muslims are Arab terrorists. Go figure. 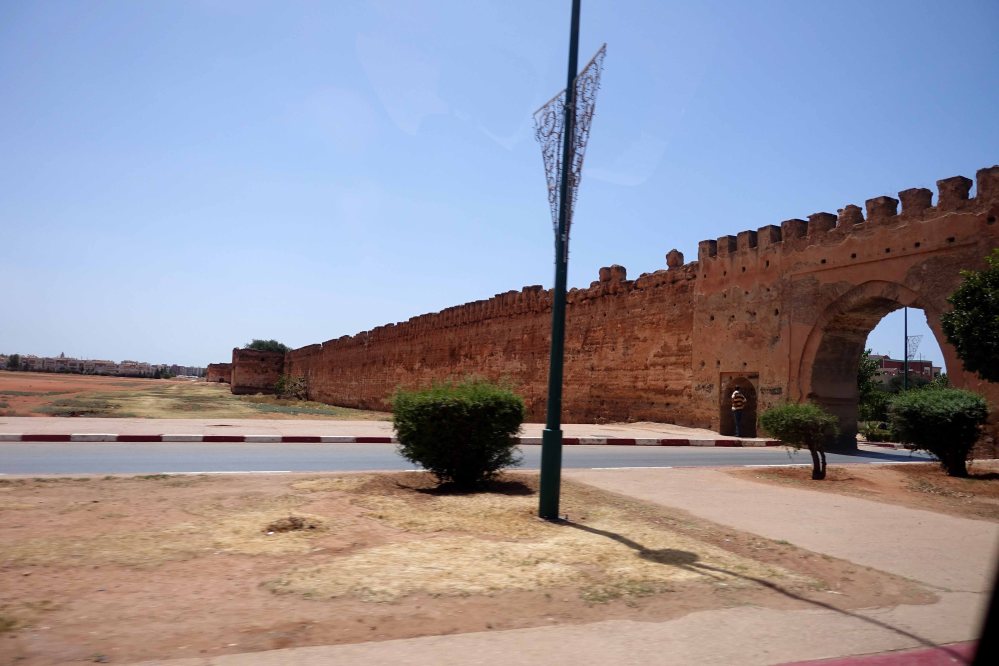 Meknes was the imperial capital of Moulay Ismail. He built a large prison under the old city for Christian sailors captured at sea. In the Koubt Essoufara (Ambassador’s Pavilion) Moulay Ismail would receive ambassadors from other countries, often to plead for the return of their countrymen. Little did they know – their countrymen laid shackled just below them.

The prison held 60,000 prisoners, they were shackled to the wall and had to sleep standing up. The prison was built by the Portugese architect Cara, who was also a prisoner. He earned his freedom by constructing the prison. 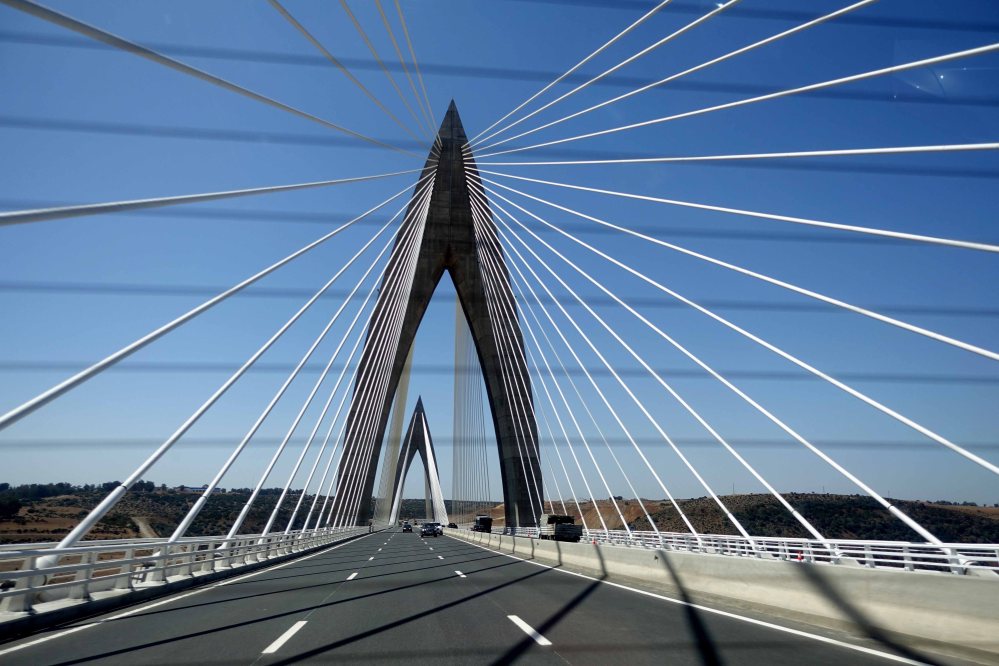 We went on to Volubilis the ruins of a first-through-third century Roman city. Dan has never met a Roman ruin he didn’t love and this was no exception. We had an outstanding guide, who took us through the center of the city, showed us the forum, the olive press, the triumphal arch, the pubic bath complete with flush toilets, the larger homes with magnificent mosaics, and all the rest that would make up a prosperous city. 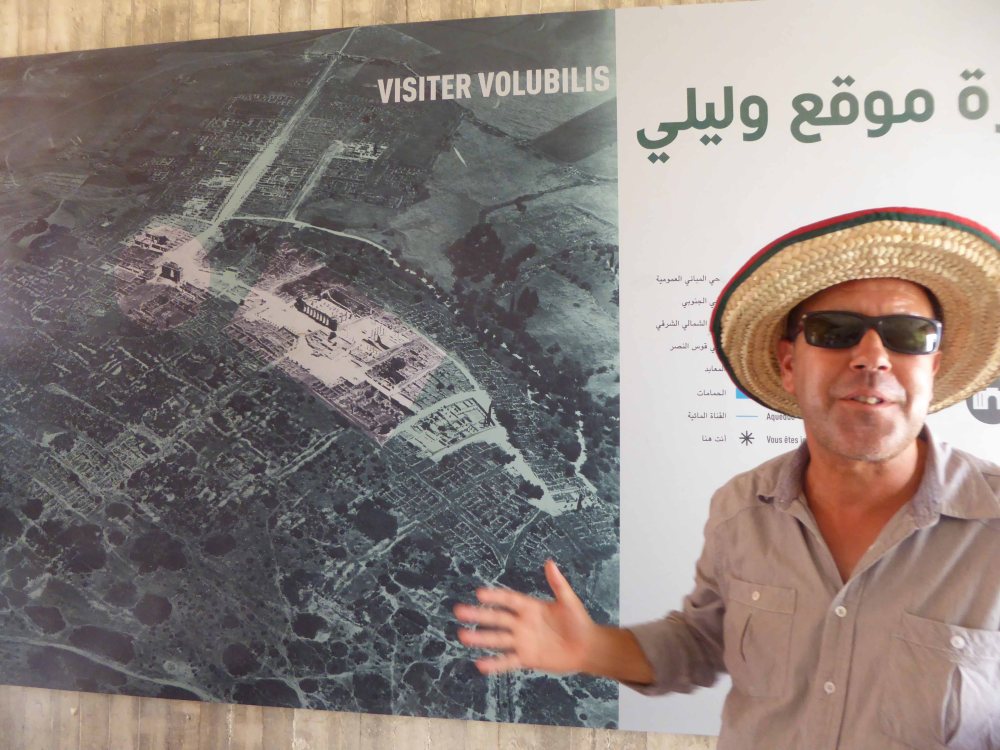 Commonly considered as the ancient capital of the kingdom of Mauretania.

Its prosperity, which was derived principally from olive growing, prompted the construction of many fine town-houses with large mosaic floors. The remains of buildings dedicated to olive pressing are still readily visible, as are the remains of the original presses and olive mills. One such building has been reconstructed with a full-size replica of a Roman olive press.

The city fell to local tribes around 285 and was never retaken by Rome because of its remoteness and indefensibility on the south-western border of the Roman Empire. It continued to be inhabited for at least another 700 years, first as a Latinised Christian community, then as an early Islamic settlement. 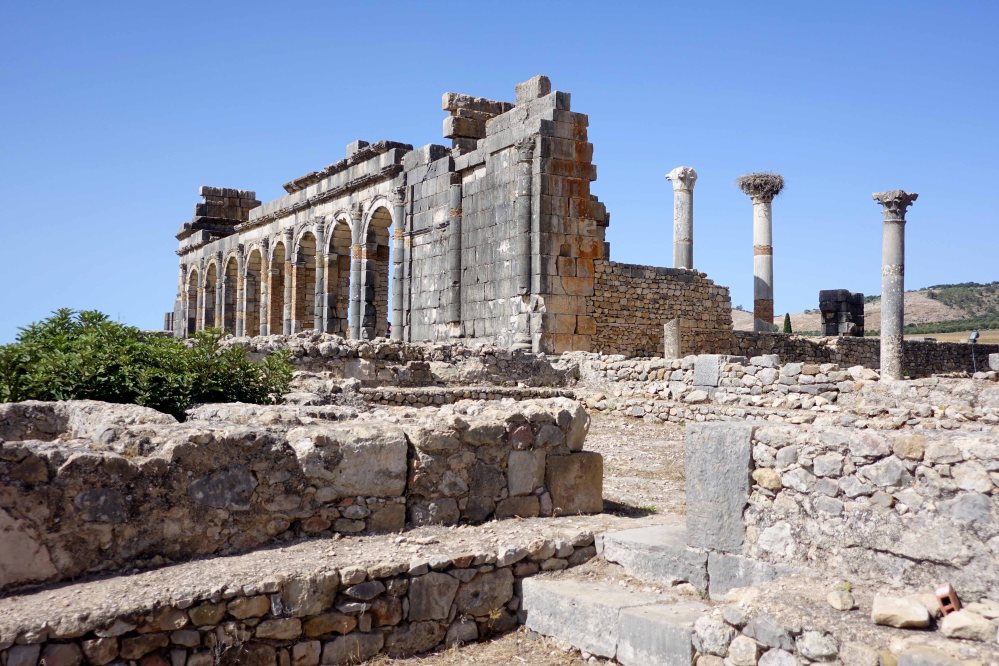 In the late 8th century it became the seat of Idris ibn Abdallah, the founder of the Idrisid dynasty and the state of Morocco. By the 11th century, Volubilis had been abandoned after the seat of power was relocated to Fes.

The Arch of Caracalla is one of Volubilis’ most distinctive sights, situated at the end of the city’s main street. It was built in 217 by the city’s governor, Marcus Aurelius Sebastenus, to honour the emperor Caracalla and his mother Julia Domna. 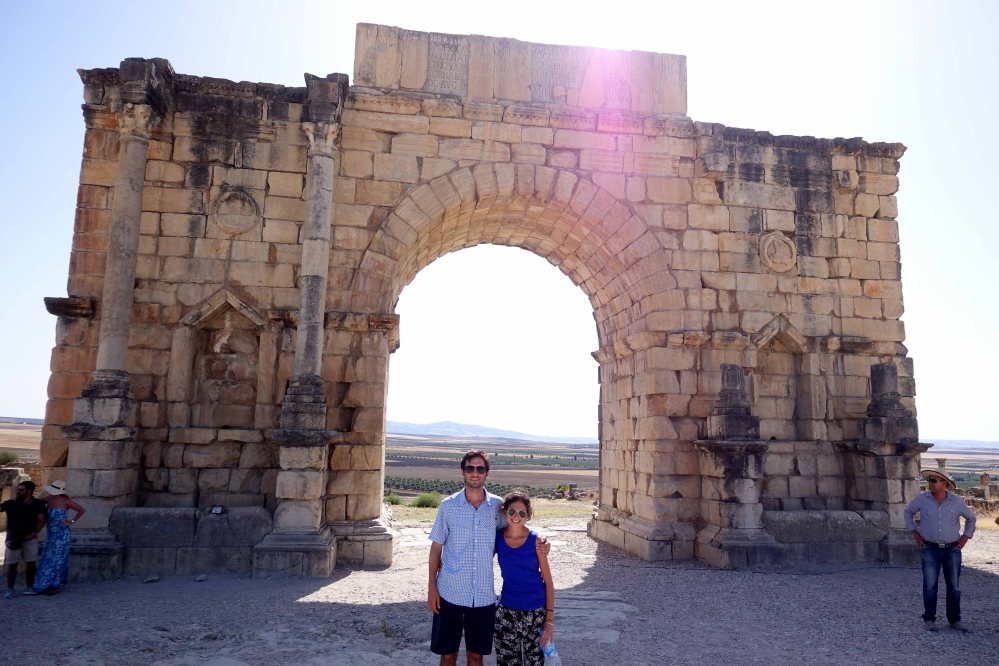 The houses found at Volubilis range from richly decorated mansions to simple two-room mud-brick structures used by the city’s poorer inhabitants. The city’s considerable wealth is attested by the elaborate design of the houses of the wealthy, some of which have large mosaics still in situ.

The mosaics come to life when you throw water on them. Most of the mosaics tell mythoigic tales. 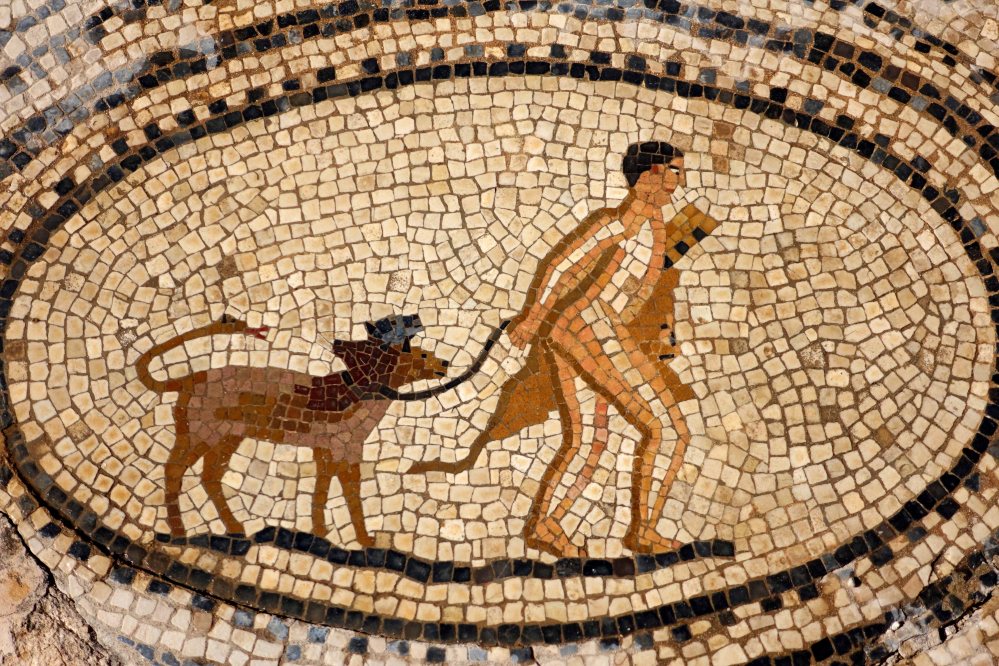 We finished the visit by walking the “the Decumanus Maximus” or Main street. It is always incredible to think about the greatness of Roman city planning.

Bonus Pic Of The Day:  The Moroccan Dirham is the currency in Morocco. The notes feature a portrait of King Mohammed VI and the royal crown. Each of the notes show a Moroccan door to the left of the portrait, demonstrating the richness of the country’s architectural heritage, and symbolizing the openness of the country. 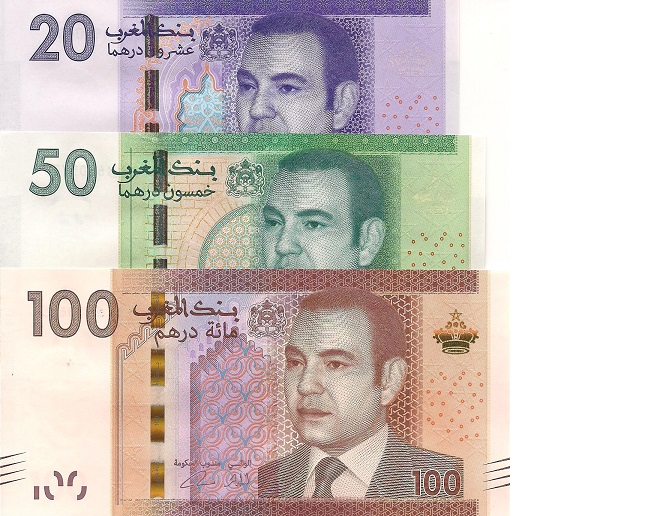