Ljubljana, the capital of Slovenia has a lot to offer, so much we actually had to make 2 posts of this beautiful city, otherwise, this one would be too long.

We took a train to Ljubljana from Zagreb and arrived in the evening. After leaving our bags in the hostel which unfortunately was a little far away from the city, we walked to the city with no plan in mind. Here we are in Congress square where most of the important buildings like the theater and opera houses are located. Castle hill is in the background and we will be visiting it later on. 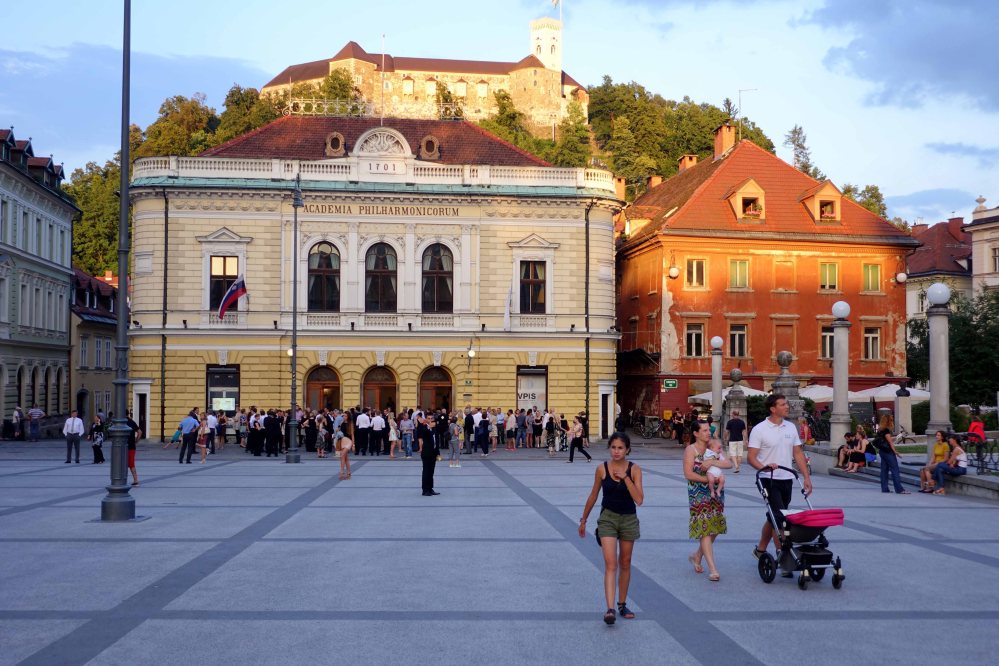 Ljubljana has no world-famous attractions, which is just great: there’s no need to hop from one place to another, taking photos and crossing the items on your checklist. You have all the time to stroll around and enjoy the city itself (Sarah’s favorite way to see a new city).

The Ljubljanica river flows through the center of town, past Baroque buildings and under the ramparts of the ancient castle on the hill. The new city and modern-day commercial core lies to the west of the river, while the old city and the castle are located on the east side of the river.

Ljubljana during antiquity, it was the site of a Roman city called Emona. It was under Habsburg rule from the Middle Ages until the dissolution of the Austro-Hungarian Empire in 1918. 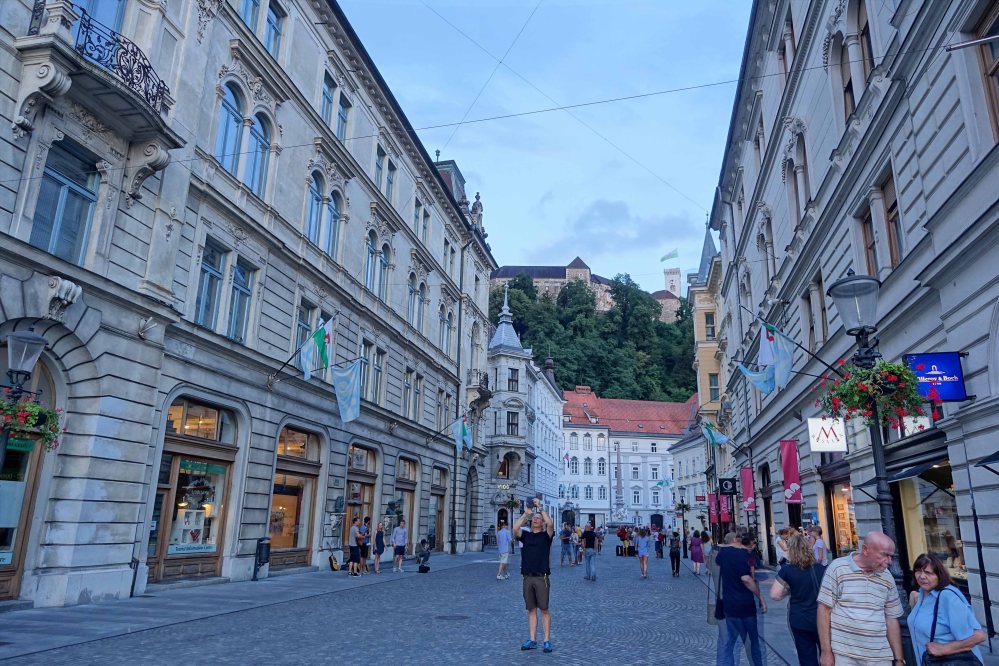 After finding something to eat, we went back to the hostel for the night. We were exhausted so we needed to rest for our tour tomorrow.

The next morning we joined the amazing free tour of the city. These free tours are all over the most important European cities and are guided by young people volunteering for your tips. Guides are not the most knowledgeable, but they will give you a basic understanding of the city and the possibility to meet other backpackers.

The main plaza of the city has a very interesting attraction. There is a specific area where it is constantly raining, you leave that circle and it’s sunny again! Pretty fun to get refreshed this way on a hot day.

In front of the rainy area, you can find an interesting story. When that green statue of the Slovene national poet France Prešeren with a muse was erected, the Franciscan Church of the Annunciation priests (on the left side, not shown in this photo) were not happy that people will see a naked woman after they went praying; so they planted a tree between the statue and the church to cover the boobs.

Our next stop was the Ljubljana cathedral.  Burnt down in 1469, presumably by the Turks, this beautiful cathedral underwent several restorations until they chose to keep it Baroque.

A host of other works of art were added later. One of the more interesting is the dome fresco painted by Matevž Langus in 1844.

The most outstanding 20th-century additions include Tone Demšar’s main entrance door relief depicting the history of Slovenia, created at the 1250s anniversary of Christianity in the Slovenian territory and the visit of Pope John Paul II.

We walked through a farmers market where we tried bear and horse salamis. The bear one was not that bad and it didn’t taste any different than normal pork. But the horse was nasty! extremely strong flavor and a dreadful aftertaste.

They took us to the Butchers bridge, again we saw the locks symbolizing eternal love. Its really neat to be able to see the same ideas all over the world, we last saw this in Soul, Korea.

The Dragon bridge was built in the beginning of the 20th century when Ljubljana was part of the Austro-Hungarian Monarchy. As one of the first and best examples of reinforced concrete bridges and of the Vienna Secession style, the bridge is today protected as a technical monument.

The last stop of the tour was the Krizanke monastery of the crusaders. In 1952 representatives of the city of Ljubljana asked the architect Jože Plečnik to remodel the now derelict monastery into a venue for Ljubljana Festival. It seems that this Joze guy designed everything in this city, no idea how he had time for all that.

But anyways, the tour was over and after some last words and tipping the guy we were on our own again. 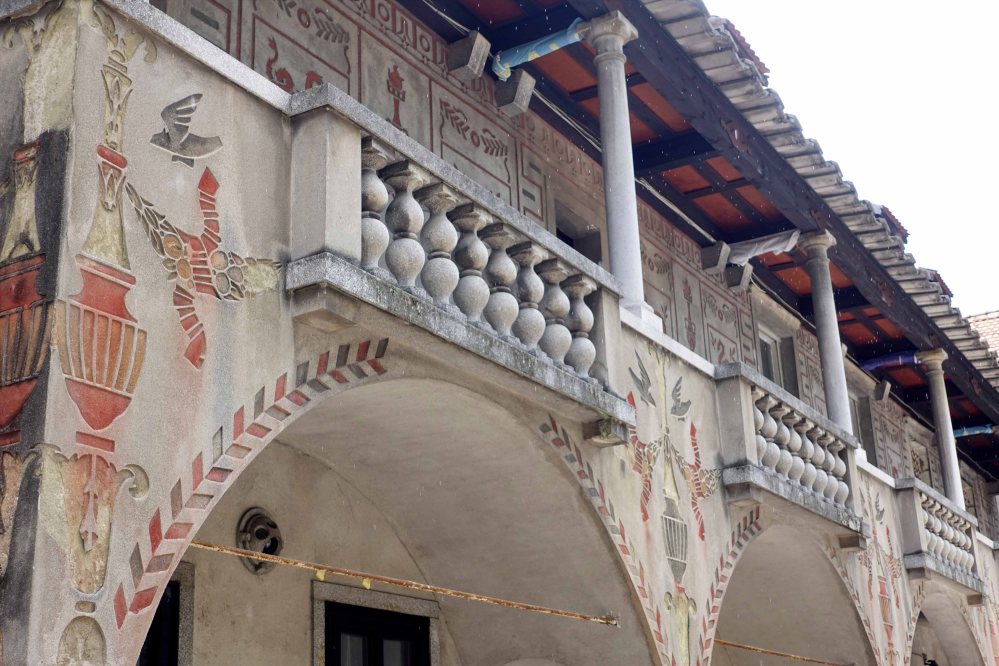 Sarah had a craving of sauerkraut, yes, some people crave chocolate, others a beer. Sarah craves Sauerkraut. We stopped at the farmers market again right before they closed, she got about a kilo of homemade sauerkraut that she devoured and it actually was delicious since it is a speciality here so I must admit I had my share. 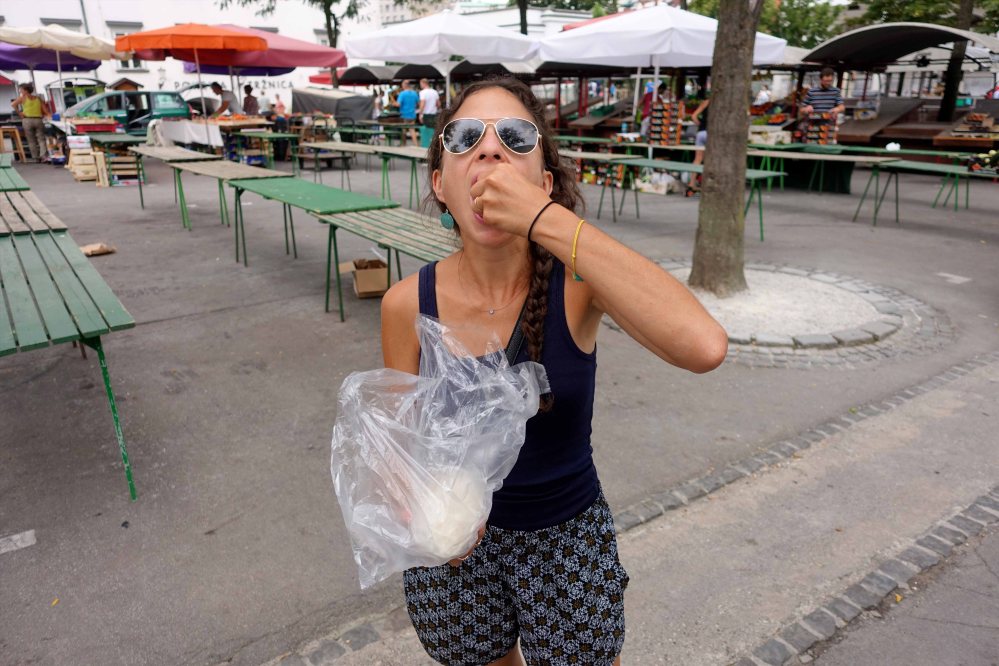 We stopped at a new coffee shop concept we have never seen before. This is a coffee shop that charges you per minute and not per coffee. They have a huge selection of teas, cookies and a professional espresso machine for everyone to use. Everything is self-serve and all you can drink. The host was super nice and he even taught Eitan how to use the fancy espresso machine to make his cappuccino. 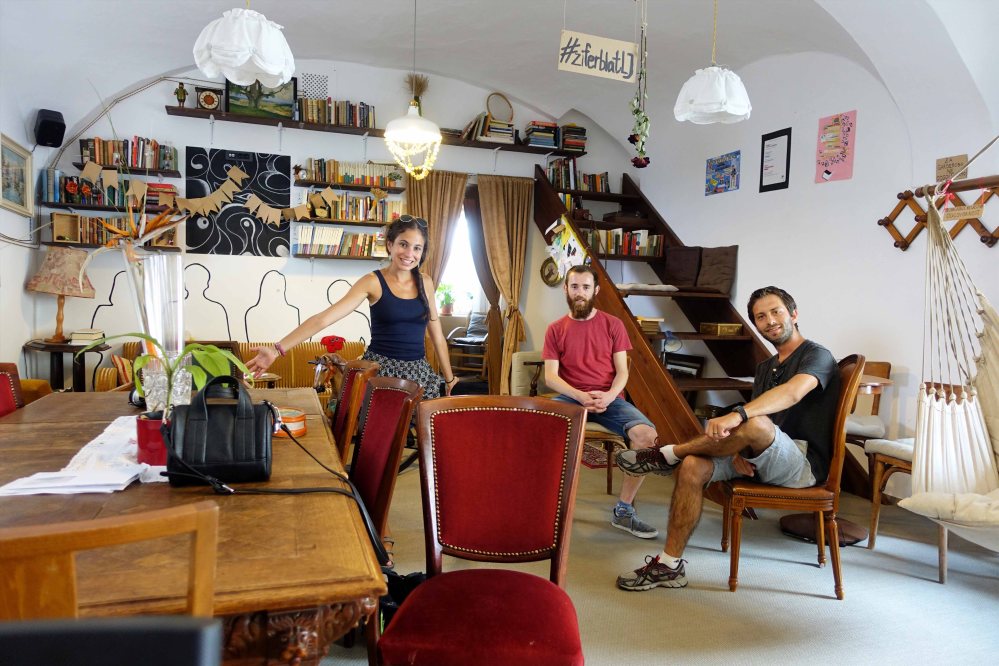 The pace is full of different rooms: the music room with instruments, the board games, the relaxing room with a hammock. When you check-in you are given one of these clocks to track your time, at the end you just pay depending on how long you stayed there. We stayed about an hour there and we ended up paying about 3 euros for both of us. 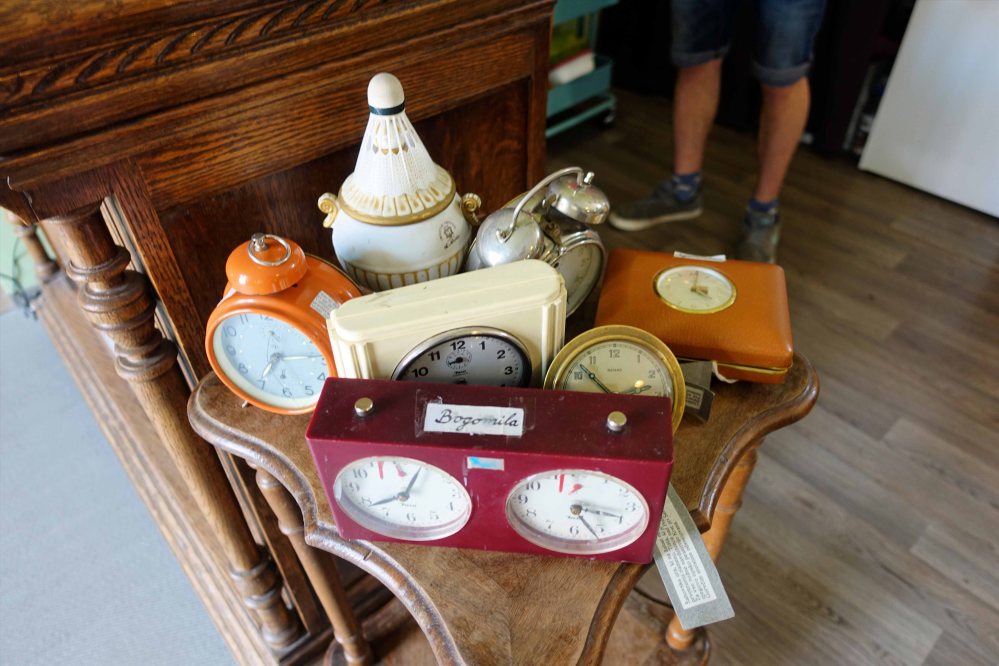 Bonus Pic of the Day: Horse meat is generally available in Slovenia, and is highly popular in the traditional cuisine, especially in the central region of Carniola and in the Karst region. In Ljubljana, many restaurants sell burgers and meat that contain large amounts of horse meat, including a fast-food chain called Hot Horse.

To be continued in part #2.