Our journey through Bosnia continues with the town of Mostar. It is the most important city in the Herzegovina region and its cultural capital. We took a 2 hr bus to get there from Sarajevo, the scenery on the way there was amazing. It makes you wonder why such few people visit Bosnia. 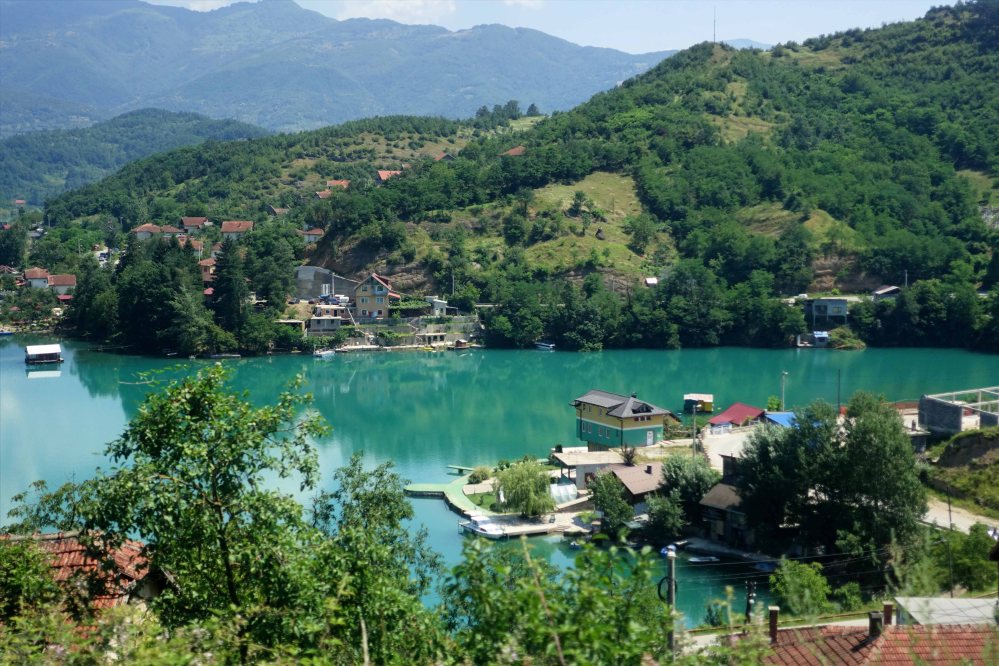 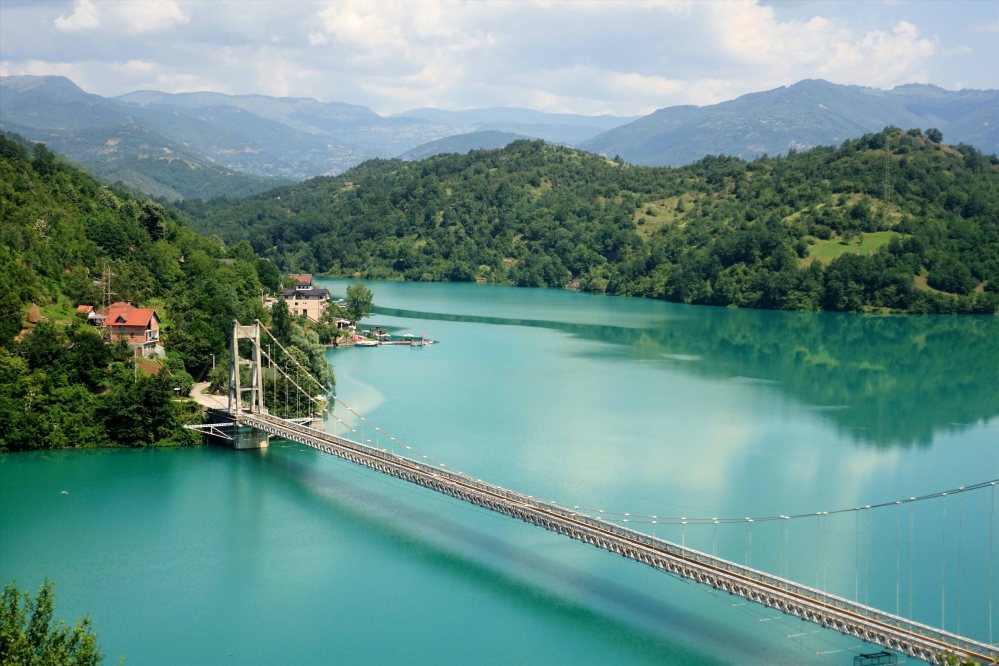 Situated on the Neretva River, it is the fifth-largest city in the country. We dropped off our bags in the hostel, where the owner was really nice and upgraded us to a room with private bathroom! Its the small things that make us happy when traveling on a budget.

This medieval town is absolutely breathtaking. It is really small and with just one main street in the old town, but walking around here transports you back several centuries. 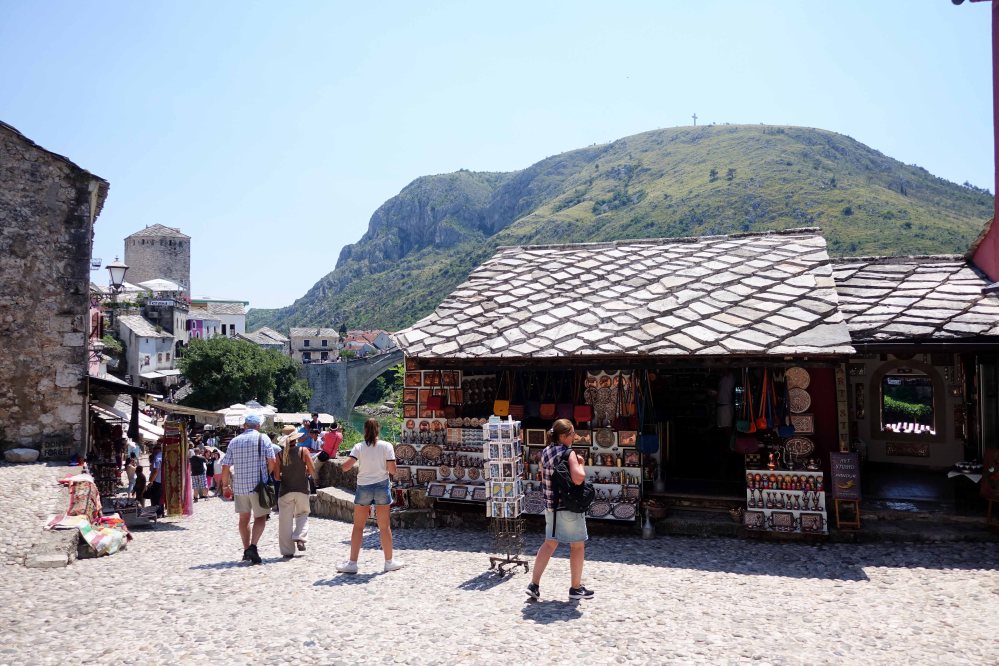 Mostar was named after the bridge keepers (mostari) who in the medieval times guarded the Stari Most (Old Bridge) over the Neretva. The Old Bridge, built by the Ottomans in the 16th century, is one of Bosnia and Herzegovina’s most recognizable landmarks, and is considered one of the most exemplary pieces of Islamic architecture in the Balkans.

Every photo you take here looks like a postcard. Its not hard to be a good photographer when you are exposed to such a nice scene.

The original bridge was destroyed during the Bosnian war. The money for this reconstruction was donated by Spain (who had a sizable contingent of peacekeeping troops stationed in the surrounding area during the conflict.

After crossing the bridge, there is a nice little park from where you have more amazing views.

During the day, there are a bunch of locals that will jump off the bridge for a couple Euros. Once in a while there is the stupid tourist who jumps as well.

We stopped to eat lunch in a very well recommended authentic Ottoman restaurant. The waitresses even dress in traditional clothes to amuse the tourists.

We ordered a HUGE sample plate of the most traditional foods of Bosnia. It was really good, most items were beef which Eitan especially loves. Still, we don’t consider Balkan food to be great, as it sometimes can taste very bland. Our favorite dish here was de Sogan-Dolma, which are onions stuffed with minced meat.

We left the old town to walk around the new city. The new buildings are actually the ones that the city leaders chose to repair because of damage from the war in the 1990’s. Every year, the local government, which the majority Croat, decides which damaged structures in Mostar should be repaired. They end up repairing buildings west of the river, which is where the Serb and Croat population live.. A crude reminder of the damages of war.

The main war building was the famous sniper tower seen in the background. This building was the sniper tower taken over by Croats and Serbs during the war aiming at Bosniaks walking, driving or simply in their homes. It was once a bank building, but during the war it was used as the sniper base because it was one of the tallest buildings in the area and was also positioned in a way that separated the city.

East of the bridge, continues to look like a war zone… 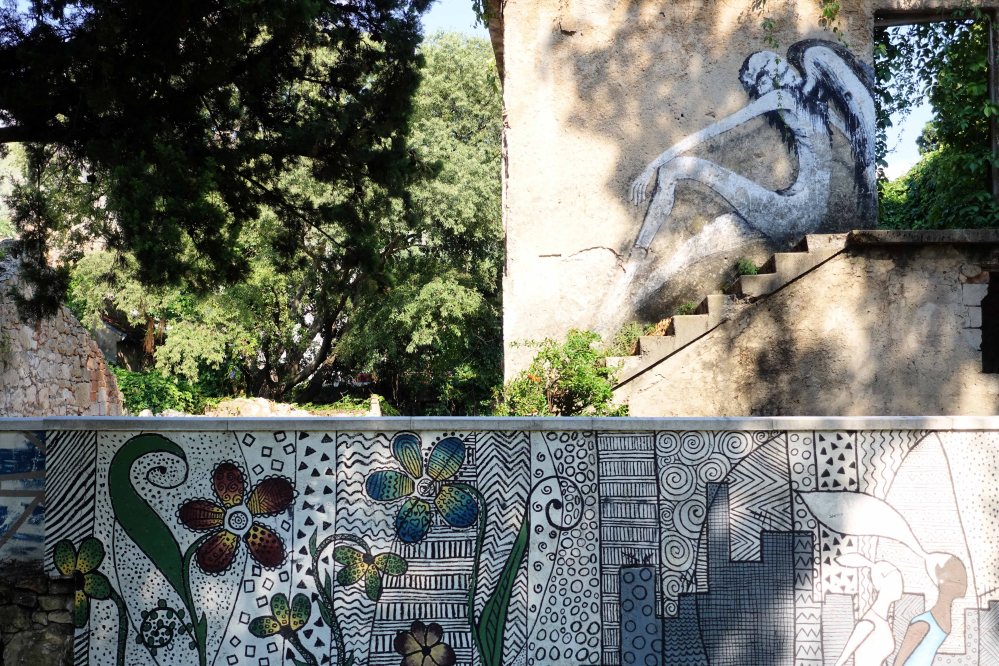 There is a park where we found a Bruce Lee monument. Apparently, it is a symbol of solidarity in the ethnically divided city. Sarah took a moment to practice her Kung Fu skills, look at that technique! 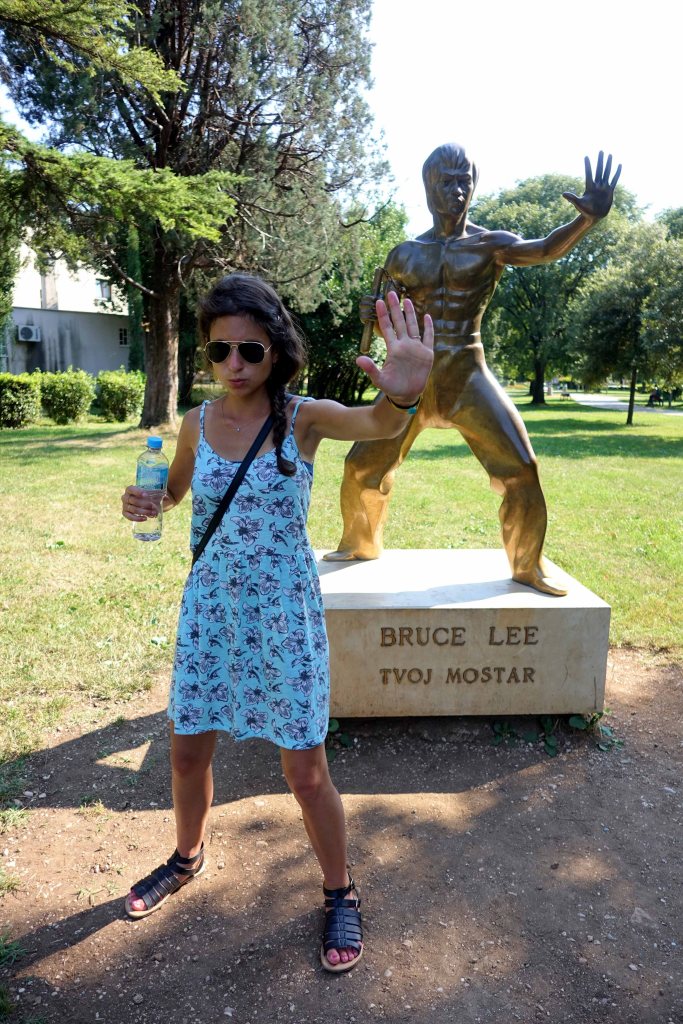 We came back to the old town to walk a little more until we could find a relaxing restaurant to drink some wine and have some snacks. 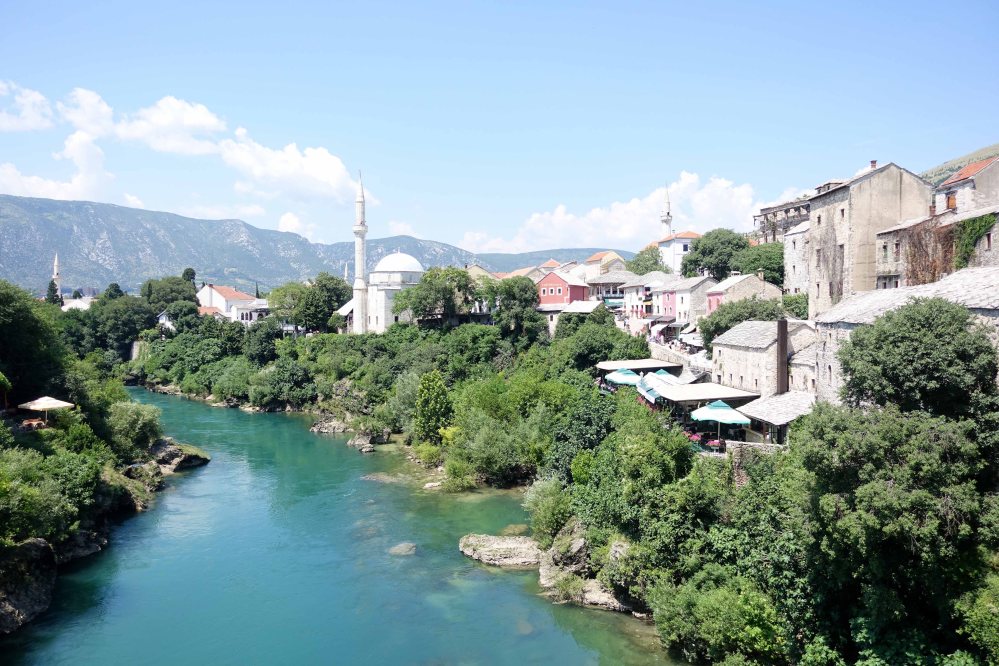 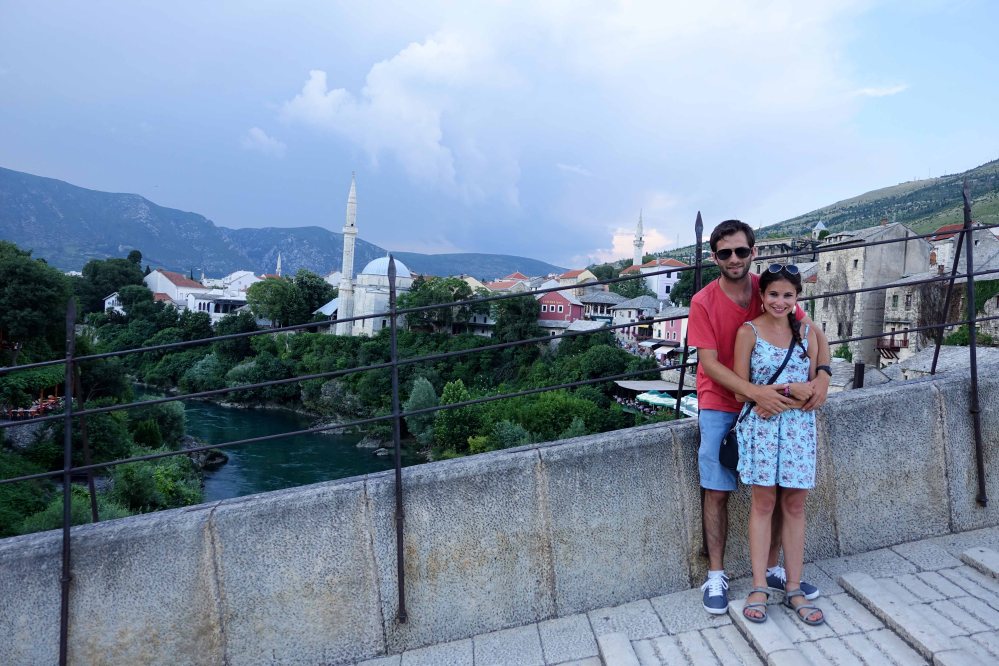 We found this cute restaurant a few streets behind the main street where we enjoyed some food and wine while enjoying the views of the oldest bridge in Mostar. 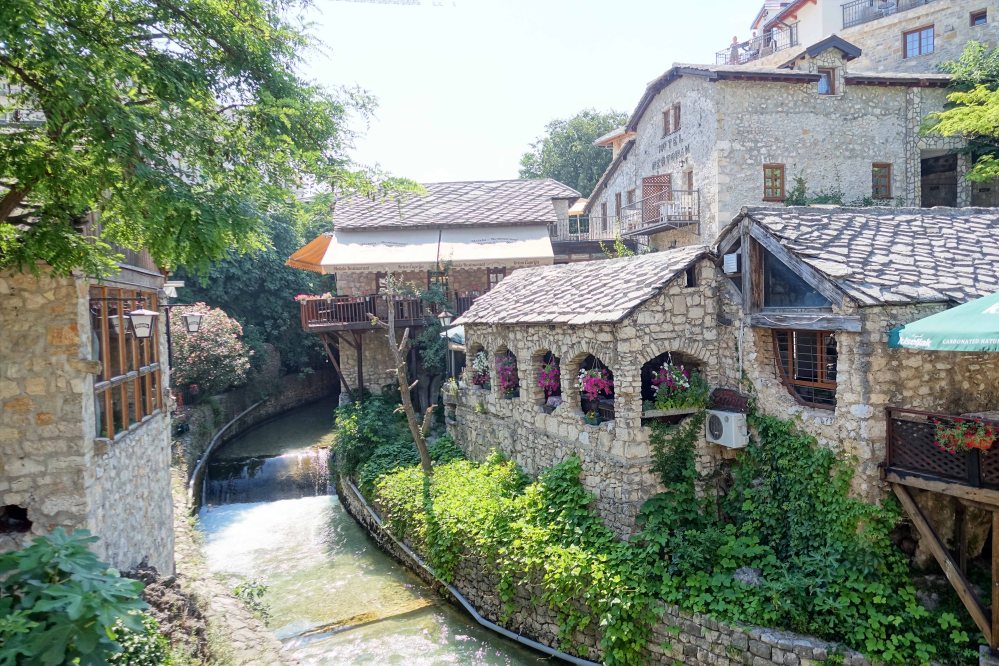 The oldest single arch stone bridge in Mostar, the Kriva Cuprija (“Sloping Bridge”), was built in 1558. It is said that this was to be a test before the major construction of the Stari Most began. The Old Bridge was completed in 1566 and was hailed as one of the greatest architectural achievement in the Ottoman-controlled Balkans. This single-arch stone bridge is an exact replica of the original bridge that stood for over 400 years and that was designed by Hajrudin, a student of the great Ottoman architect Sinan.  After our wine and snacks we went back to where we had lunch for some more food and then slept well after another full day.

Bonus pic of the day: While cities like Sarajevo are a prime example of social harmony (it was, until the 20th century, the only major European city to have a mosque, Catholic church, Orthodox church, and synagogue), other Bosnian cities are more sectarian in nature. Nowhere is this more evident than in Mostar, where Bosnian Croatians live on the western side of the Neretva River, and Bosniaks reside on the eastern side. Mostar is divided into six municipalities, but, due to electoral laws, no local elections have been held in Mostar since 2008; both sides have their own national theater, post office, and other separate public services. There is hope that both sides can come together on election reform in 2016, but time will tell.