We decided to focus our sightseeing today in the Burj Khalifa area. This new developed area includes a mall, aquarium and the tallest building in the world! We started by taking the metro to the Dubai Mall, this huge shopping center has everything you will need to survive the apocalypse. The metro stations here are absolutely spotless and modern, it is also the cheapest way of transport here.

They have an aquarium inside the mall that apparently was really good. We decided to go visit it and we were highly disappointed. Maybe because we have seen great aquariums like the Monterey one, but this was small, not much variety and very expensive. We were out in 30 min. They have a tunnel on the first floor of the mall where you start your visit.

This shark photobombed our selfie!

The second part of the aquarium is the one that has the typical exhibits. Nothing special here, just the typical giant octopus here and there and the neon jelly fishes.

We have noticed this is the norm in UAE. They are trying to make crazy cool attractions with amazing catch phrases like “the biggest aquarium in the world” and then in small letters they say “inside a mall”. The attractions here are not up to par to the U.S. attractions yet and cost double the price. They are just trying to be in the Guinness book by breaking some sort of record to put in the brochure.

The one thing they are really good at, is building shopping centers. The Dubai Mall is gigantic, its full of art installations, an ice rink, many food courts, etc… These famous divers fountain is pretty awesome!

They even have a Dinosaur in here!

We then discovered Nirvana, the food court was open in Ramadan!  What they do in order to allow people to eat is they put curtains that prevents any fasting Muslim to see what is going on in there. We obviously without a doubt ate there. Opportunities to eat during Ramadan are scarce so we needed to take advantage of this one. We ate some Doner Kabab sandwiches next to hundreds of other tourists and employees who are faced with the same challenges as us.  They even had a Yogurtland which we had to try but regretted it when it was about 3 times the price as it is back home

We had purchased tickets to go up to the observation desk at the Burj Khalifa at 5:00 pm. We read online that it is nice to go before sunset and stay until it is completely dark to see the transformation of the city. There are 2 options to go up, the first is the cheap one (around $40) gets you to the 124th floor at 452.1 m (1,483 ft). The most expensive option gets you to floor 148 at 555 m (1,821 ft) but it costs around $200. The expensive 148th floor was only opened after the Chinese built the Canton Tower in Guangzho, which was a few inches taller than the 124th floor; the Emirates needed to respond by opening the 148th to get hold that record again.

We had about an hour before our time to go up so we walked around the lake in front of the building. There were many beautiful picture opportunities but the interesting thing is that the Burj Khalifa is so tall that the lens can’t capture all of it. The photo below is actually a vertical panoramic photo!  The design of Burj Khalifa is derived from patterning systems embodied in Islamic architecture, incorporating cultural and historical elements particular to the region. 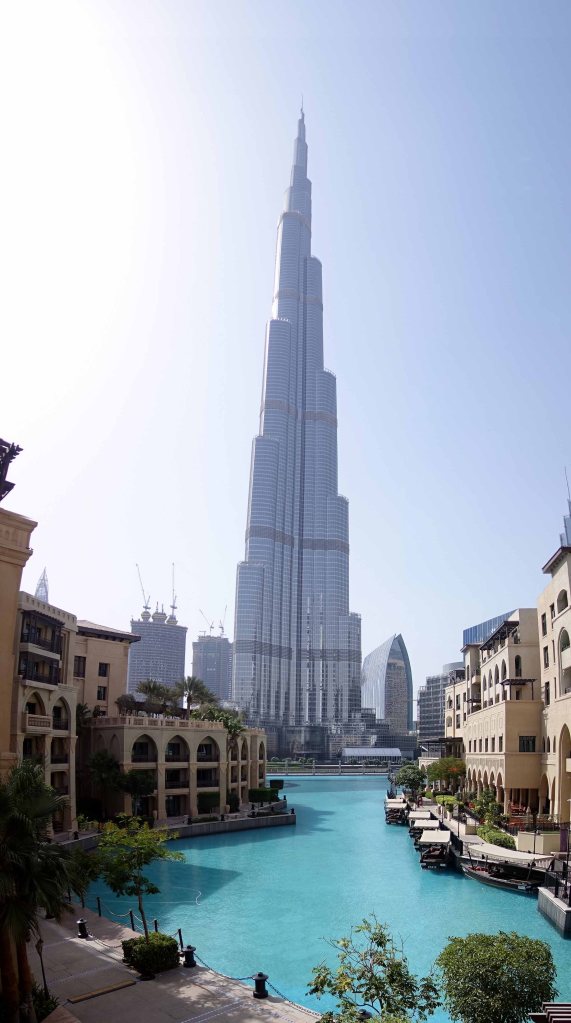 This photo shows what is in the other side of the building. The pool here has the biggest dancing fountain show (vegas style) that we will be able to see at night. On the left there is the high end souk and the very luxurious hotel The Palace. 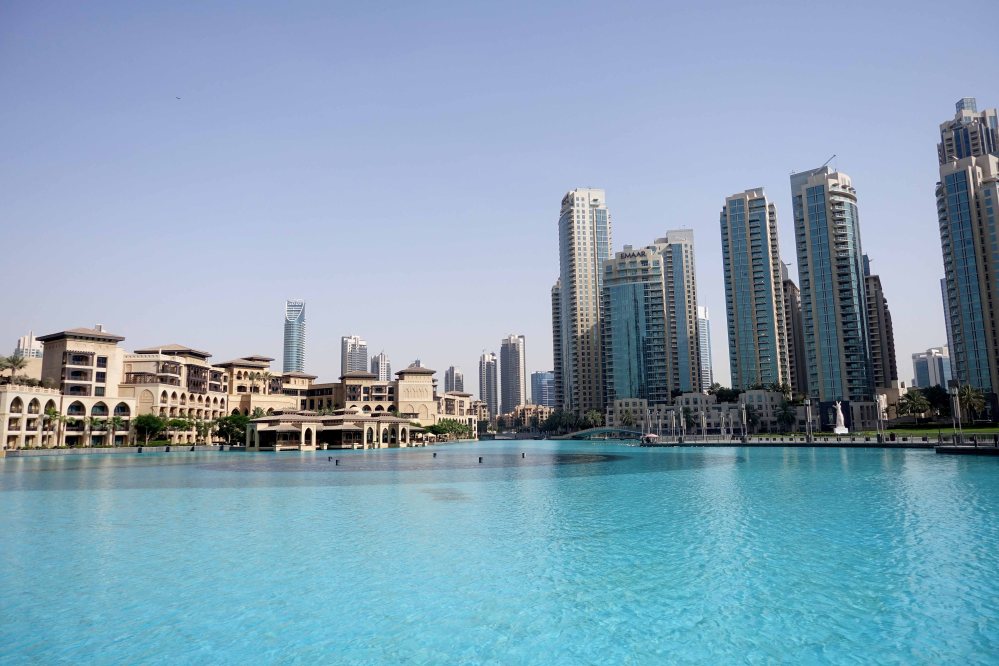 It was time to touch the sky. The way up is actually fun, there is a long walk from the Dubai mall to the elevator and you go through an exhibit of how they built this engineering masterpiece. Amazing photographs and also interesting explanations of how they solved the obvious problems that come with building the tallest building in the world.  The Elevator probably takes 15 seconds to get you to floor 124th and you can immediately go to the outside observation deck. 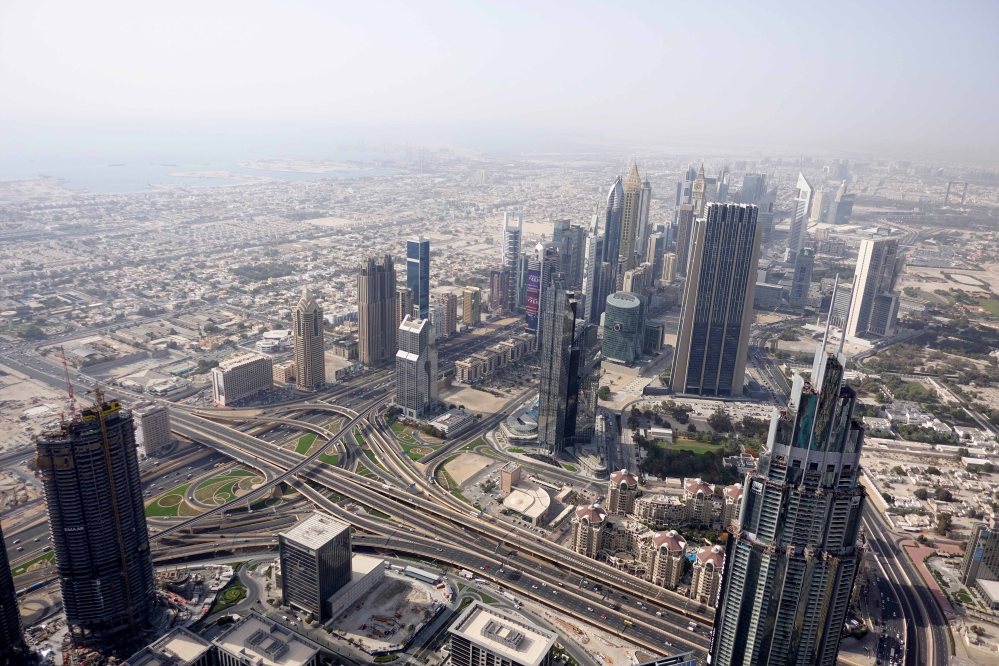 It is the tallest structure in the world, standing at 829.8 m (2,722 ft). But the mind blowing moment comes when you are actually standing in the tallest observation deck in the world (452 m) and you look up; there is basically another skyscraper above you! Imagine the view from up there. Fun fact: Under normal conditions, when all building maintenance units are operational, it will take 36 workers three to four months to clean the entire exterior facade.

The observation deck offers a 360 degree view of Dubai, here you can see the Address hotel that caught on fire on 2015. To put things into perspective, this hotel is by far the tallest building you see in this photo, and the Burj Khalifa is 526 m (1725 ft) taller. The exterior temperature at the top of the building is thought to be 6 °C (11 °F) cooler than at its base. 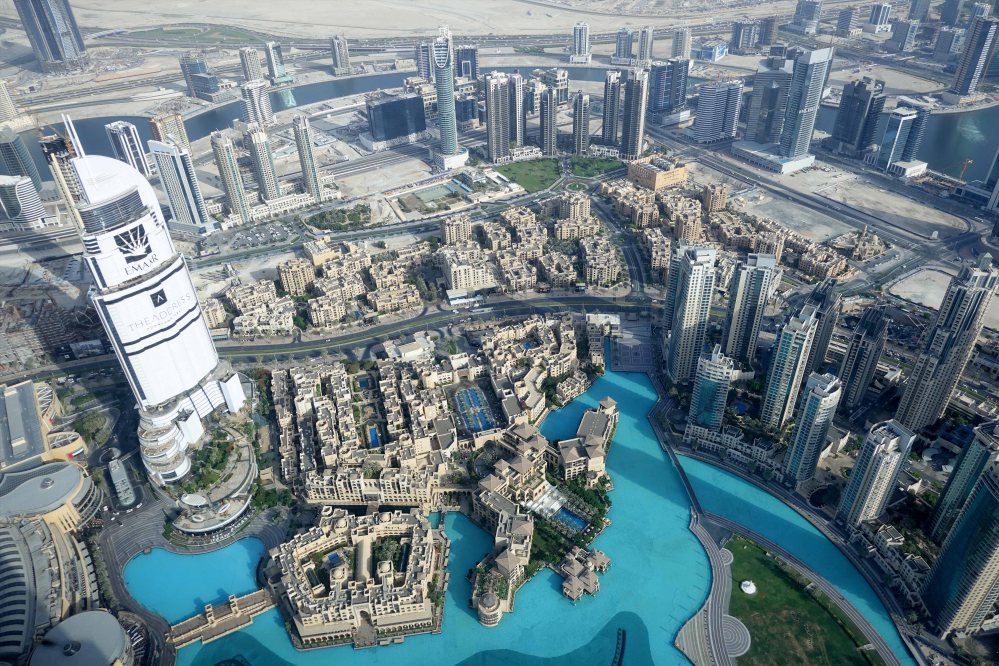 Visibility was not that good, but apparently on a clear day you could see Iran from here. At least we were able to see the World Islands project on the horizon during sunset. 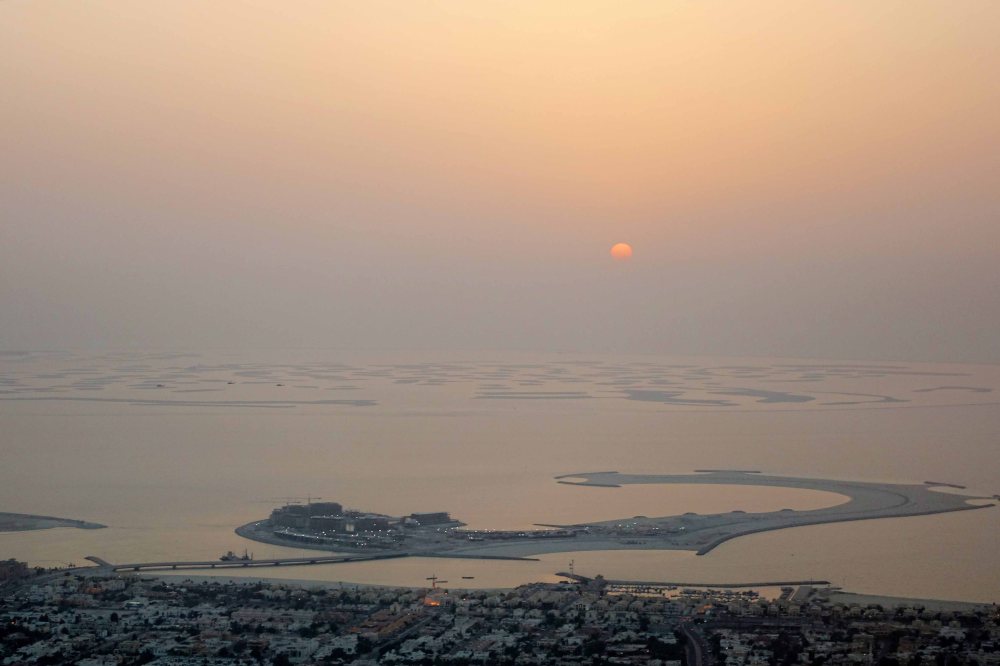 When it gets crowded everybody wants the photo on a window. It took a few tries with the manual setting to get this one just right! 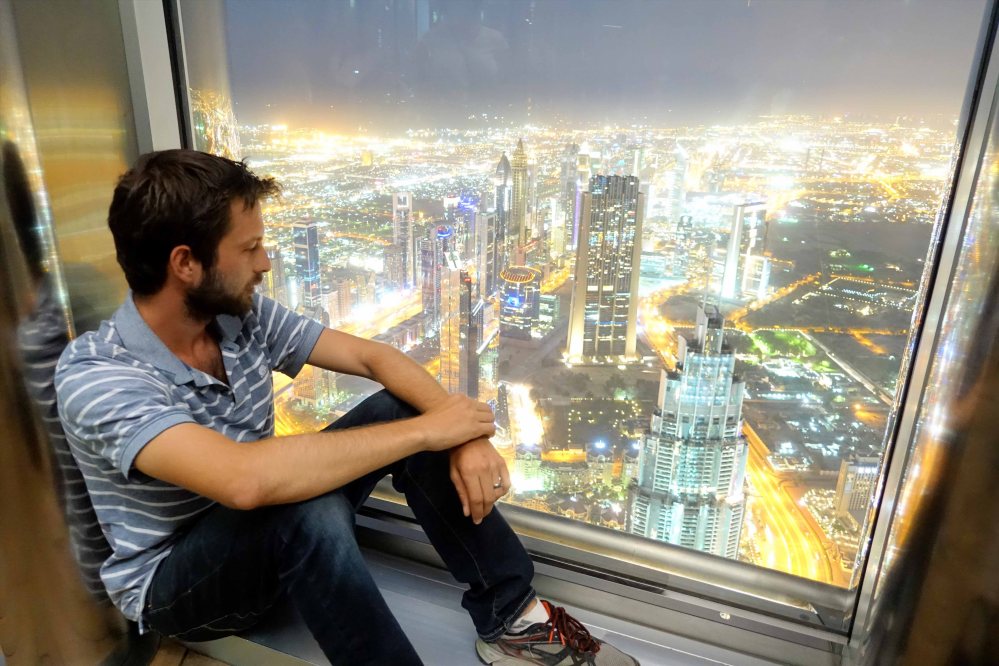 The night scene was a million times more impressive than the day one. The city just becomes alive with all the lights on their buildings.

Same photo as before of the Address hotel but at night. We were able to see the fountain show from up here. It looked miniature. 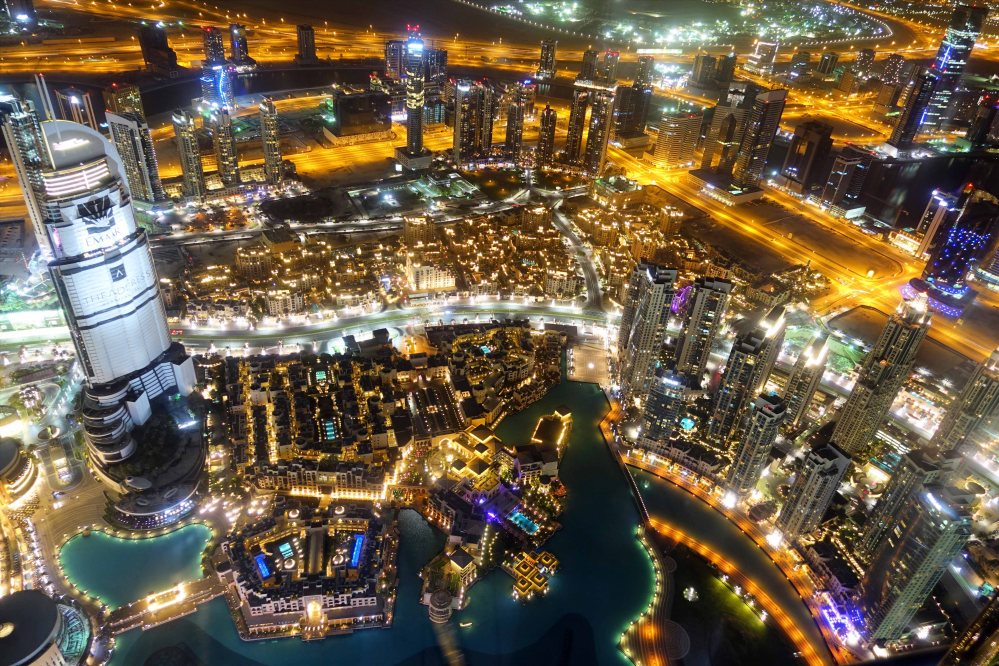 Thanks to Eitan’s FOMO of having to see the view during the day and during the night, we spent around 5 hours in there (now we own the world record of having stayed at an observation deck the longest!!). We were hungry and thirsty so we went down to see the light show on the building that happens every 15 minutes and it is usually different every time.

The dancing fountain show was actually VERY disappointing. No colors are used so its only white water. The show is no different than the Vegas one, it is just on a bigger scale. There was little to no innovation on this one. 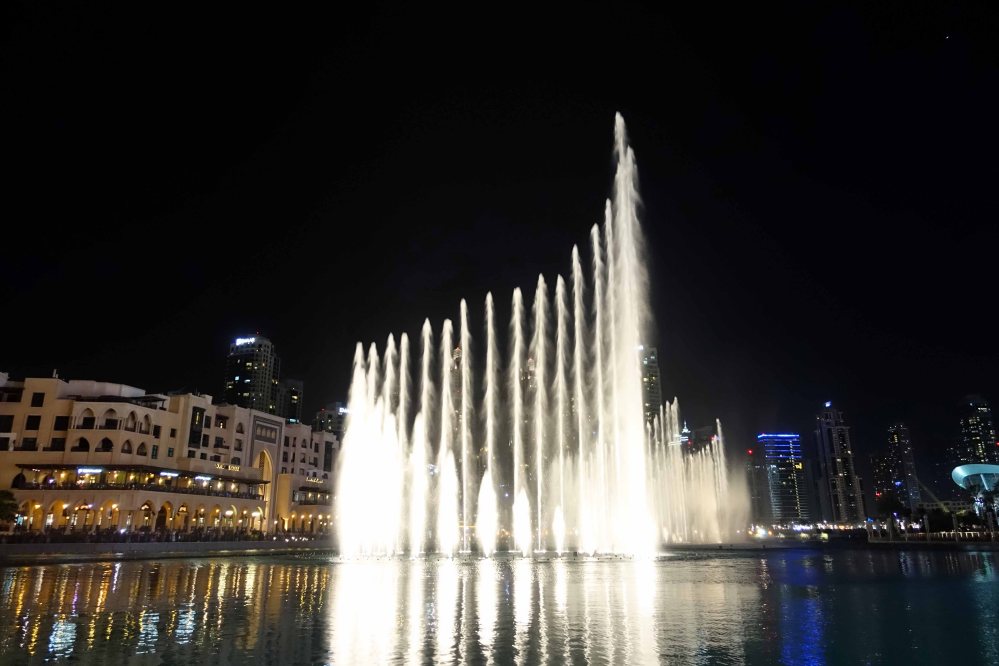 After 7:00 pm, everybody comes out to break the fast (Iftar), the mall gets super crowded and the restaurants usually require previous reservation. It is a complete different Dubai. We are assuming this is how it looks during the day on non-Ramadan months. 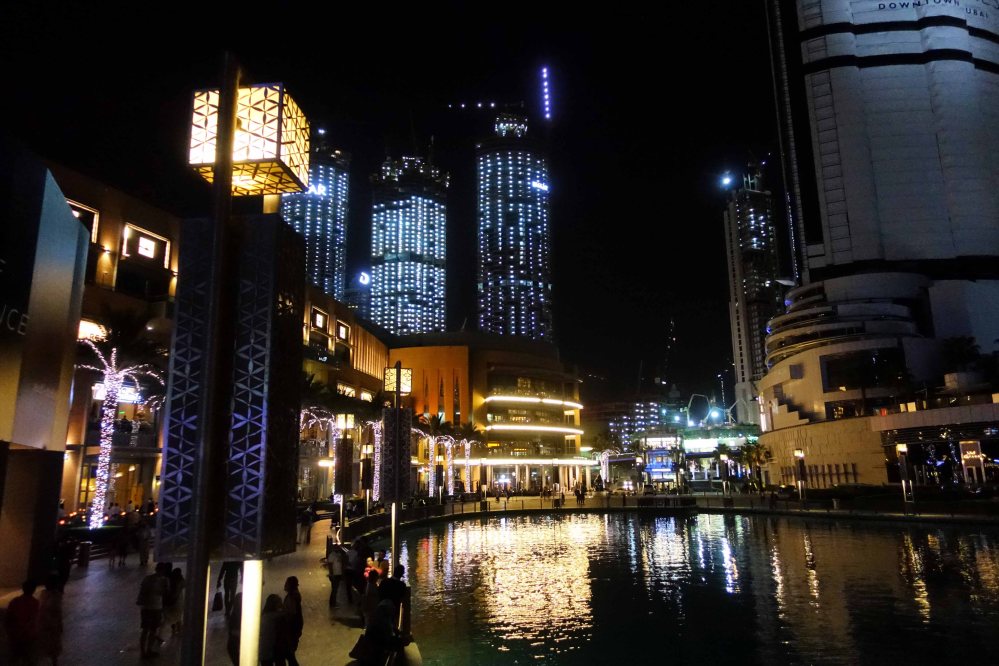 We tried to find an affordable restaurant to eat dinner but everything here is so expensive and we are traveling on a budget. Each dish on a sit down restaurants cost around $20-25 so that is too much for us. We went back to the fast food for a cheap fast meal before we headed home. Guess who saved us? indeed… Mr McDonalds here has a dates pie that was delicious. 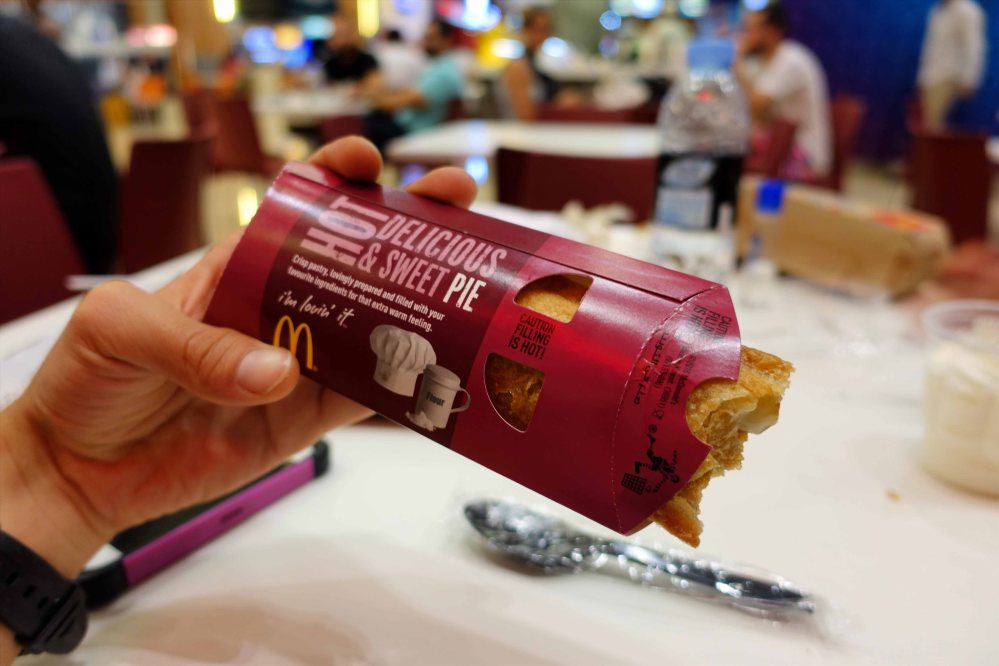 On the way home Eitan stopped at the Lebanese restaurant next to the hotel to get some Fatoush salad to go! It was delicious and now he has developed an addiction to Fatoush salads.