We have adapted to Ramadan, we knew in order to survive the day we had to eat the biggest breakfast ever. Our hotel offers a buffet which was actually pretty good for the price; we ate like there is no tomorrow.

We decided to divide Dubai into three areas and visit 1 of them each day. We started our first day by visiting the old town, this is where Dubai began and its full of nice old buildings, markets and shops around the river. This is the only part of Dubai that still has some kind of “authenticity” and does not look like a Vegas cheap copy.

We walked to the Dubai Museum which was very nice. The exhibits look more like something out of the Pirates of the Caribean at Disney.

It is located in the Al Fahidi Fort, built in 1787 and is the oldest existing building in Dubai. The descriptions are to the point and interesting and the displays are extremely well made. We were actually pretty entertained here for around 2 hours! This Museum charges $1 to get in so it is the cheapest attraction in Dubai… by a very large margin. 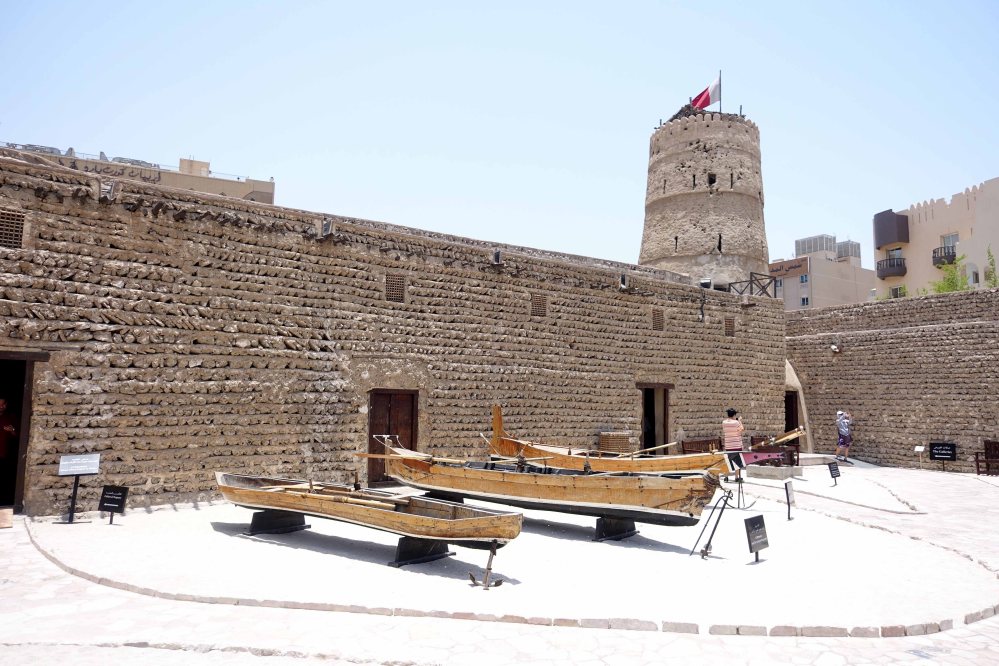 The museum explained the origins and way of life of people in Dubai and how it became so developed after they discovered oil in 1966. Basically they went from a small fishing village to a modern city with the tallest building in the world in 40 years! I want some of that oil money.

After this great short museum we walked around the old souk. Dubai was a trading spot of sailors and several shops started to get established next to the Dubai creek, this store later become full of markets that you can still see to this day. The products changed a little bit and you will only find a bunch of souvenir stores selling the same pretty stuff with a bunch of overly touchy Arab salesman that want to put the Keffiye (head scarf) on your head for a photo.

We walked around the Dubai Creek, this river was basically the heart of the city and the reason Dubai became such a trade powerhouse. Throughout the years many trader shops were established there to supply merchants transiting the area. What is left of those shops became the current Old Shuk.

Britain left the Persian Gulf in the early part of 1971, having announced their intentions in 1968, causing Dubai and Abu-Dhabi, in conjunction with five other emirates to form the United Arab Emirates. Dubai and Abu-Dhabi ensured in the negotiations that between them they could control the country effectively, enabling even greater expansion as seen today. In 1973, Dubai joined the other emirates, in introducing the UAE dirham, the uniform currency of the UAE. Dubai and Abu Dhabi between them now hold the majority of control in the UAE, which was part of their conditions for joining. To enable this, Abu Dhabi and Dubai are the only emirates who have veto power over matters of national importance, whereas the other emirates only have a vote on such matters.

We walked back to the hotel to get picked up by our desert safari. We were taking some breaks by hiding in the alleyways to drink water. Fortunately McDonald and KFC (AKA the Messiah restaurants) came to save the day and were one of the only places that sell food during Ramadan, only takeout. So we carried our food to our hotel to be able to eat it.

Our desert safari tour came to pick us up in order to drive us into the desert dunes next to the Oman border. The safari starts with this amazing 30 min drive on the dunes, the drivers of these vehicles are pretty insane which makes this ride super fun.

Sarah was about to puke so the driver slowed down to chill a little bit. What a great job he has! We stopped for some photos with a great background of the whole Arabian desert! 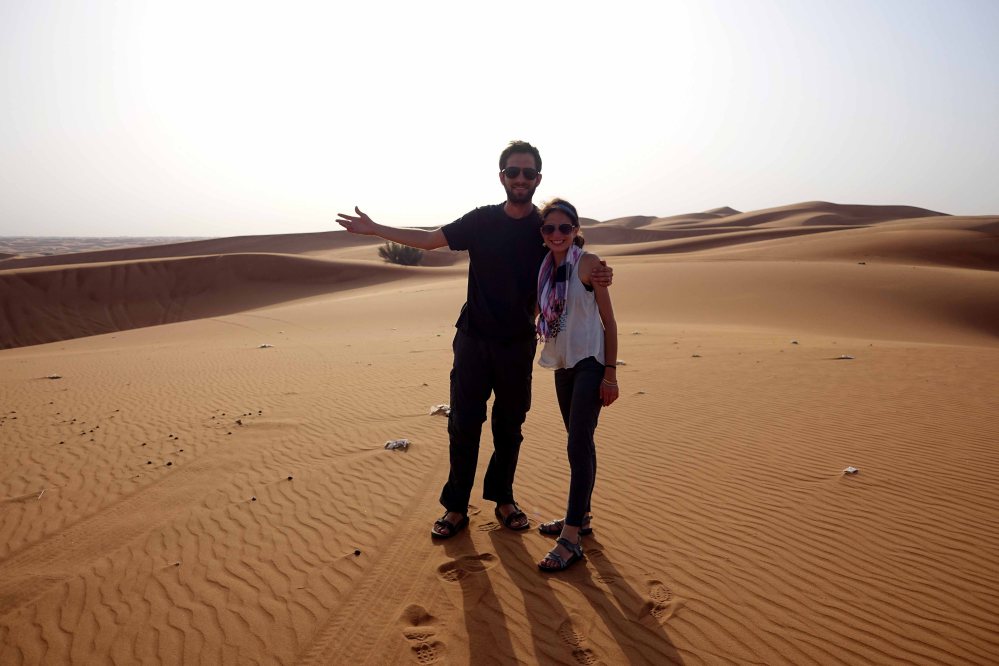 After arriving to the dessert camp we thought it looked pretty similar to the Bedouin experience in Israel. Here they give you henna tattoos, hookah, camel ride, buffet food and a traditional show all included in the 150 Dirahm ticket ($45). 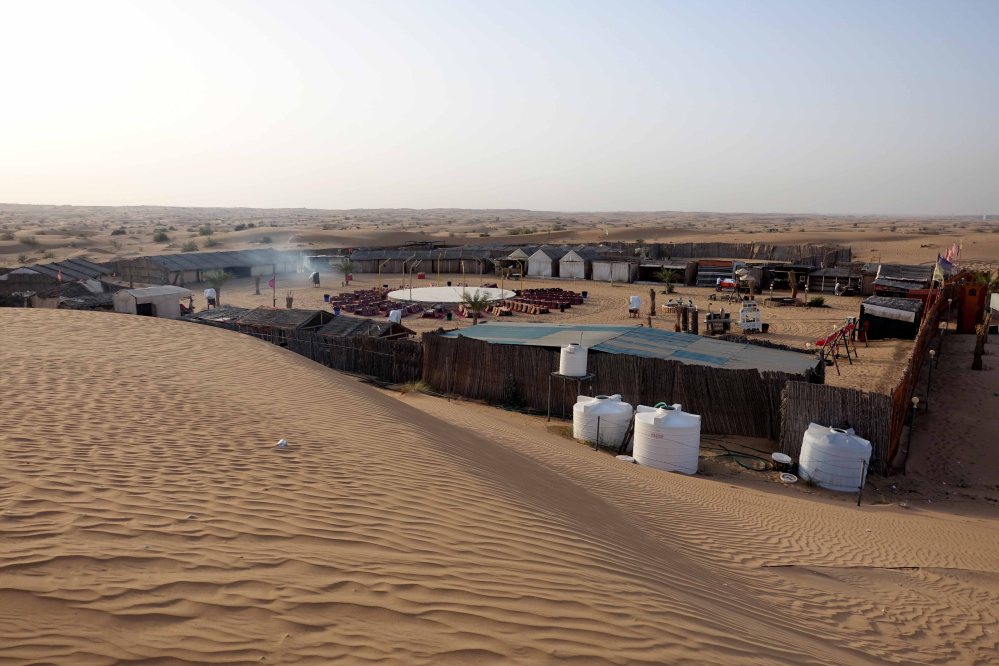 The place, as you can imagine with everything in Dubai is extremely touristy. The camel ride lasted literally 2 minutes (I’m not exaggerating) just so they can take a photo to sell it to you later for $20. The food was good and the overall experience and setting was very enjoyable.

Eitan wanted to play with the sand like a little kid, he went to the top of a dune and roll down eating all the sand possible. Very idiotic of him but there is a nice photo at least! 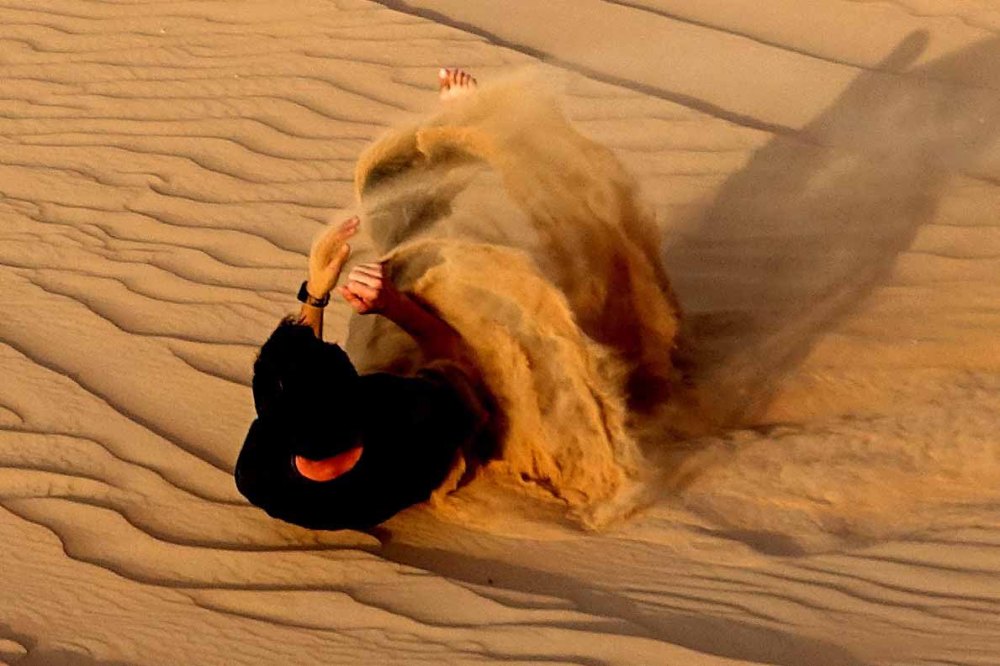 Sarah got a Henna Tattoo while Eitan enjoyed a hookah with a super nice Australian guy we me from the same tour. 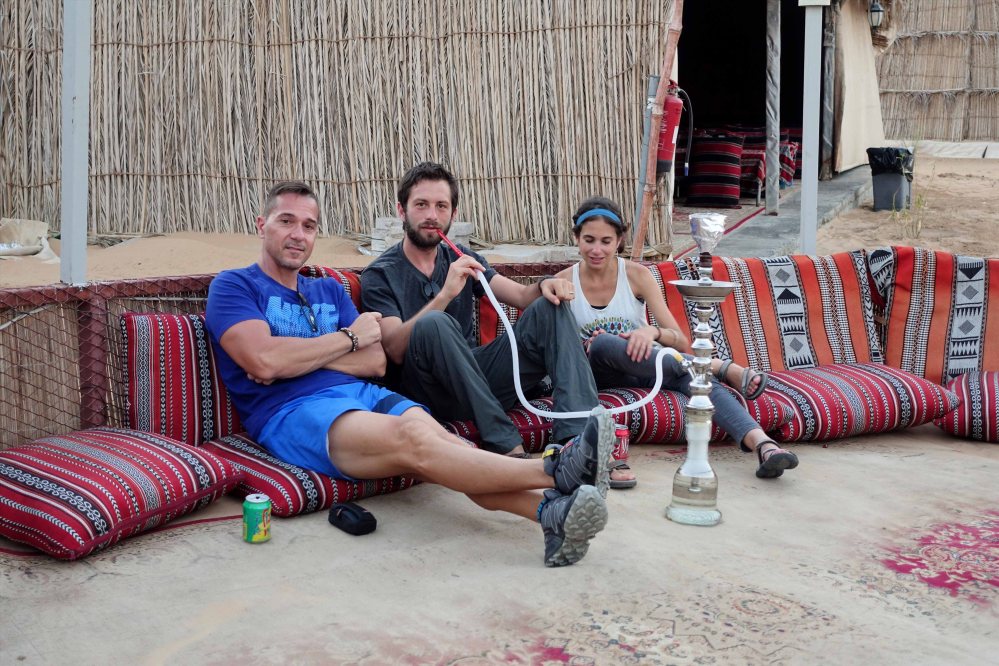 Because of Ramadan, no alcohol or show were included. There was just one Sufi dancer giving a show for 5 minutes which was fun to watch. The guy rotates like a dreidl with his pretty long dress creating a nice illusion.

He then turns on the lights on his dress creating a human spinning Christmas tree!

The food was good but they literally give you 10 minutes to eat. After the show there is one guy that screams “show is over, please go now!”. They pick you up and bring you back to your hotel!

Bonus Pic Of The Day: This country is all about having fun; with their amazing first world progressive rules, like no touchy touchy your partner, banned alcohol and knees and shoulders should be covered (because that one really makes sense), they are now officially the place I will be retiring. Watch out Las Vegas!! this place might get the title of “craziest place in the world to have a bachelor party”