Thuk Jay Chey is how you say “Thank you” in Tibetan. This is our last entry on Tibet and we really enjoyed our time here. So… Thank You Tibet!

Today was a very interesting and expensive day. Because of the idiots of Air China cancelling our flight we needed to book a another tour day in Lhasa with our guide Namgyel. Natalia and Ramiro joined us as their flight was cancelled as well. This worked out for all of us as it was cheaper to go in a group of 4. We didn’t have transportation included so we walked all day to the different sights; we were pissed at this as the whole day costed us $500 but the tour agency didn’t have the decency to include a car for a couple of hours to take us around.

Our first stop was one of the temples in the outskirts of Lhasa, very close to the military barracks. You see, when you walk around Lhasa you will notice a million cameras looking at you, our guide explains that they have microphones everywhere as well and everybody is being monitored every second they are on the street. It feels like George Orwell 1984 novel. The yellow walls are covering the military barracks from the normal street that leads to the temple.

People leave offering on the walls leading to the temple. This are mainly rock carving Buddhist art.

Magnificent Thousand-Buddha Cliff of Chakpori Hill in Lhasa. Every day, many Tibetan Buddhists come here to worship Buddhas. There is many to choose from as you can see.

When we left the temple we passed thru this mud pagoda shop. Tibetans bury their dead with a sky burial ceremony, basically they cut the body in little parts so the crows can eat the parts, thus becoming part of the natural cycle of live-dead (food chain). The parts that are not ingested during the process that can last a several hours are collected, cremated and mixed with the mud seen here (bottom right); the mud-ashes mix is molded into a small pagoda (left of the picture) for the family to leave on a temple next to Buddha.

We walked to the Dalai Lhama’s summer palace or Norbulingka. built from 1755, it served as the traditional summer residence of the successive Dalai Lamas from the 1780s up until the 14th Dalai Lama’s exile in 1959. Part of the “Historic Ensemble of the Potala Palace“, Norbulingka is recognized as aUNESCO World Heritage Site. 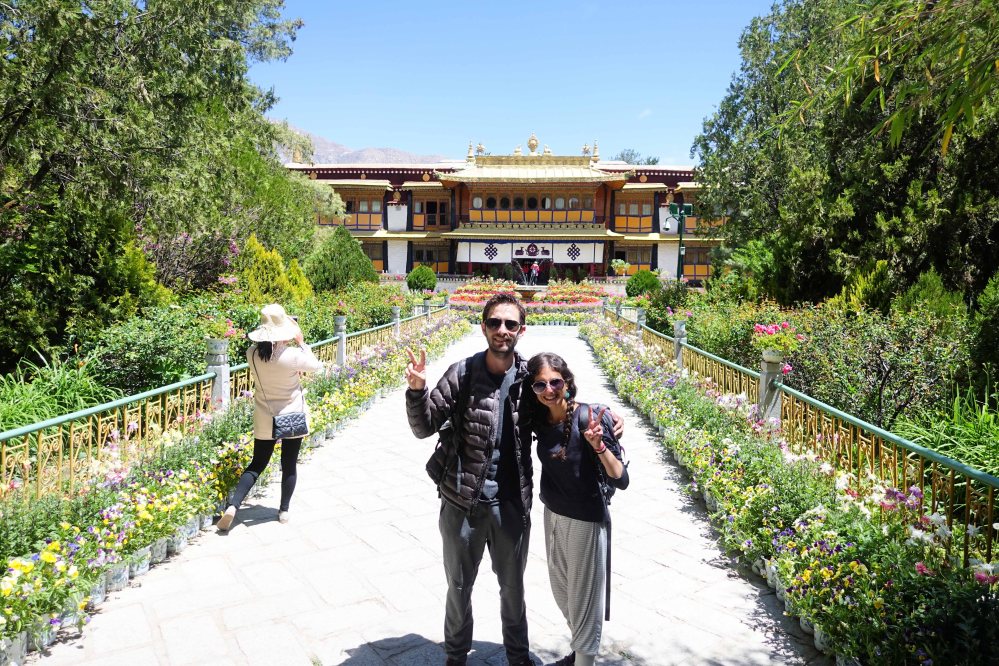 This place is more modern and recently build. It is managed by the Chinese and you could tell our guide was not happy about it. This is when things started to go downhill with him and he started to act very bizzare. He basically skipped all explanation of the modern buildings and he looked very uncomfortable being there. Still, the palaces where very nice but repetitive after visiting many already during our week in Tibet.

The buildings in Tibet are constructed with walls with an inward slope as seen here. This is to resist earthquakes better. Most buildings have resisted the several earthquakes that have hit Tibet in the last centuries, including the 2015 Nepali one.

We then walked to lunch, nobody wanted to eat Tibetan that day but the guide didn’t even acknowledged the way better looking Chinese restaurants we walked by. Food was not bad, but we would have liked more some stir fry chicken instead of yak momos. You can tell they are very cheap with the tea here. It still tasted like water.

We walked to the Monument that stands in the southern part of the Potala square, just outside the protective zone and buffer zone of the world heritage site. It celebrates what the People’s Republic of China calls the “Peaceful Liberation of Tibet” by the People’s Liberation Army. When apprised of the plans to build the memorial, the Tibetan government in exile claimed that “the monument would serve as a daily reminder of the humiliation of the Tibetan people.” The construction in this sensitive spot is a political message to Tibetans about Chinese rule over the region.

Next to the monument is a great viewpoint of the Potala palace and surrounding parks. We spend a few minutes here taking photos of this amazing building. 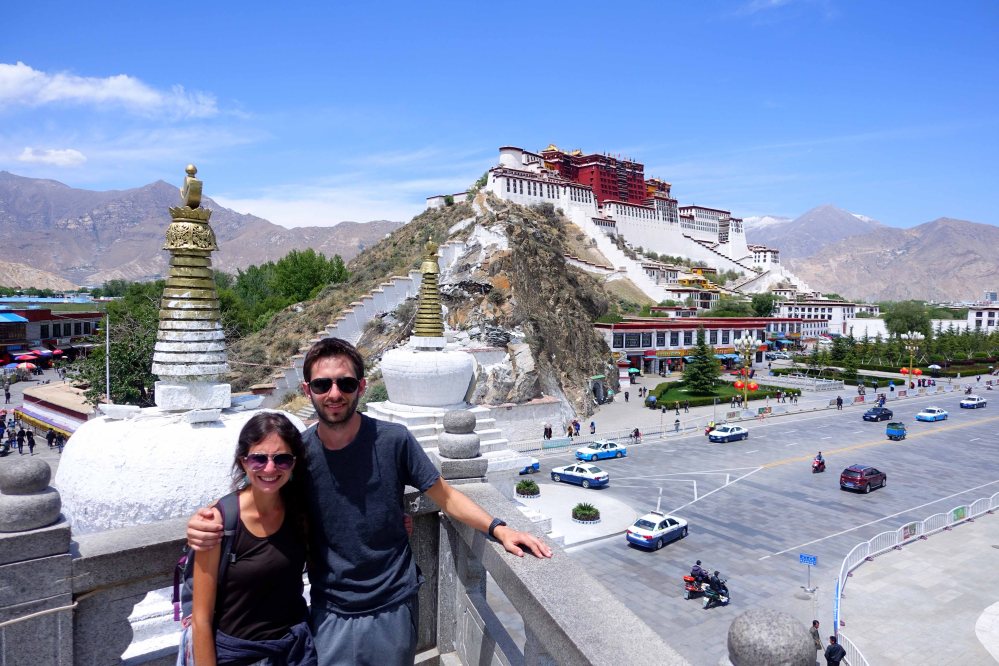 Our next stop was the Canggu Nunnery, this is the first time we visited a nunnery and the whole visit was very uncomfortable as our guide suddenly stopped talking to us. He was behaving really weird inside this nunnery and we believe it was because Tibetan Buddhism still considers woman as an inferior gender, so he was not happy they have a temple just for themselves (this is just an assumption btw).

The vibe here was incredible all the nuns were very welcoming, not like the monks on other monasteries where they do not want you there. The nuns invited us to see different rooms.

As a public nunnery, Canggu Nunnery focuses on passing on and promoting ceremonies and rituals of believing Goddess of Mercy and Buddha Tara. The temple is not large, but very clean and neatly ordered. It is divided into two parts, one for ceremonial activities and the other for daily activities. Beautiful stone steps lead to the main entrance of the nunnery. The beige walls, black window lattices and colorful flowers in the garden are perfectly and neatly arranged, showing serenity and tranquility. All nuns here are very kind, always with smiles on their faces. 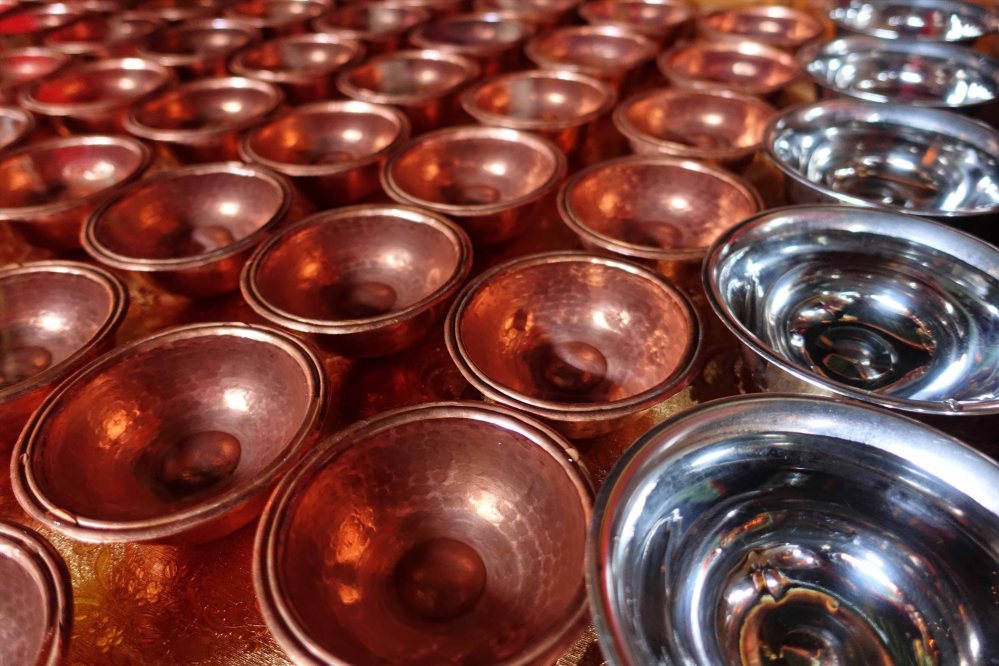 This Buddha has PTSD. I have no idea what is wrong with this one, but I don’t want to see what he has seen….

After we said bye to our guide, we walked around the Muslim quarter in Lhasa. It was a surprise to us that this existed and made us realized how “one sided” this tour was. it would have been amazing to learn how the Muslims arrived here and learned about the mix of cultures, but all the information we ever got was about Tibetan Buddhism and how China is evil. 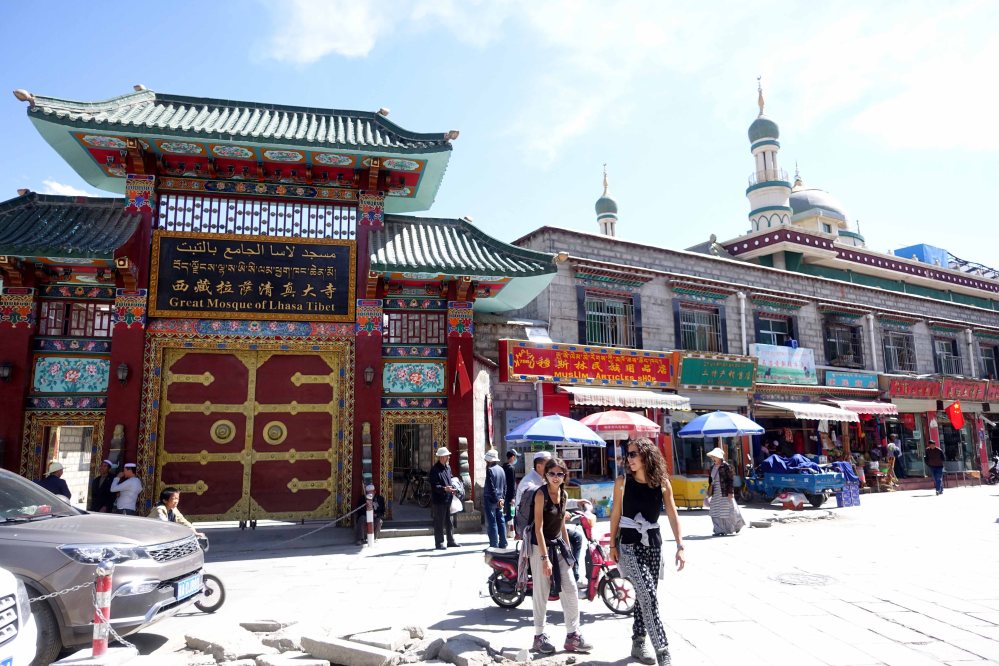 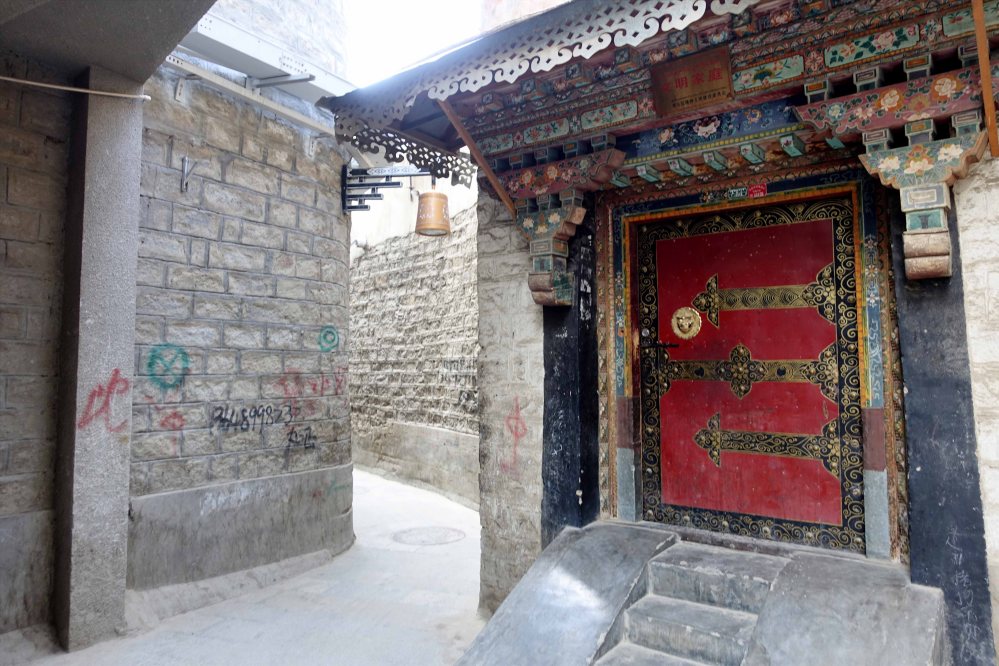 After many days of eating Tibetan food, that is definitely not praised as being “good”. Our bodies needed some taste of home. We found the one and only KFC which recently opened in Lhasa and ate some of the best tasting fatty oily delicious heart attacky chicken ever made by mankind. Seriously, please don’t judge, try eating bland food for a week and then see if you don’t crave this! 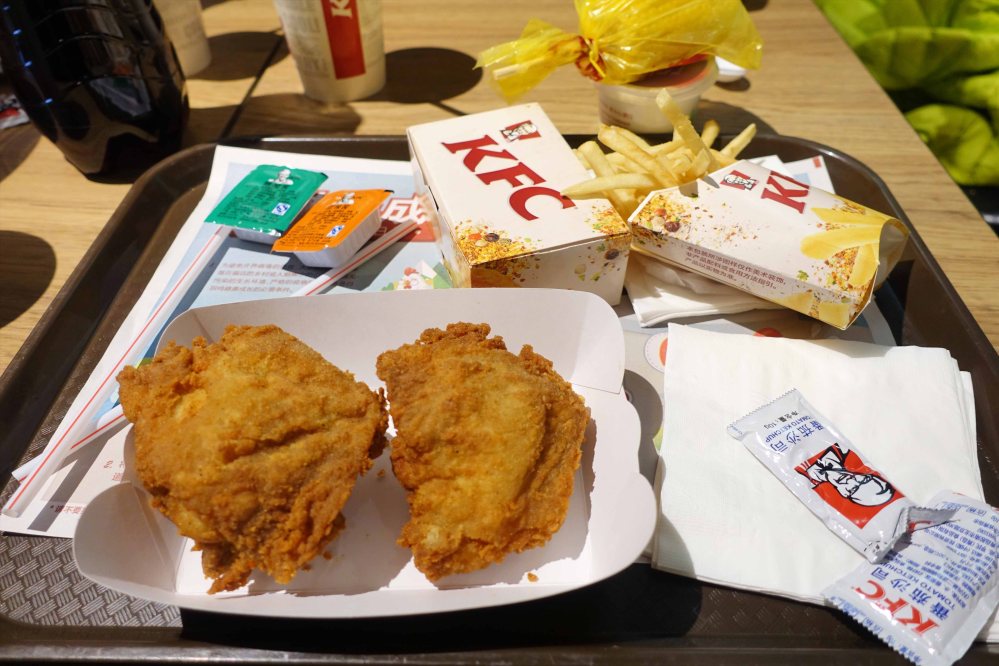 We finished our day with a beer at the hotel rooftop overlooking the Potala Palace.

The next morning we took the flight back to Kathmandu. It was incredible as well. This photo shows what happens when the pilot announces that Everest is visible on the right windows; the copilot needed to get out to “crowd control” all excited passengers.

This is our last picture we took in Tibet. Saying bye to a majestic place and saluting the King of Mountains…. Everest!

Bonus pic of the day: I knew there are Chinese car brands, but I would have never expected to see so many. I counted like 15 different car brands that I haven’t seen before. Also, Chinese cars are the majority, you will never see a Japanese car here.