Today we had a 6 hour drive in the van to our next stop, Shigatse which is the second largest city in TIbet, west of Lhasa. The ride was enjoyable since we got to chat with all the awesome travelers on our tour and luckily the roads were nice and smooth, totally unexpected.The scenery here in Tibet is breathtaking, kind of reminds me a little of what you see everywhere in New Zealand, completely untouched.

We stopped in a small town to see how they make traditional incense; In Tibet incense do not have a little stick in the center as anywhere else.

We stopped at several places to see the Lhasa river. The Lhasa River is subject to flooding with the summer monsoon rains, and structures have been built to control the floods. Here, Sarah is wearing her awesome fake Marmot jacket she bought in Kathmandu! 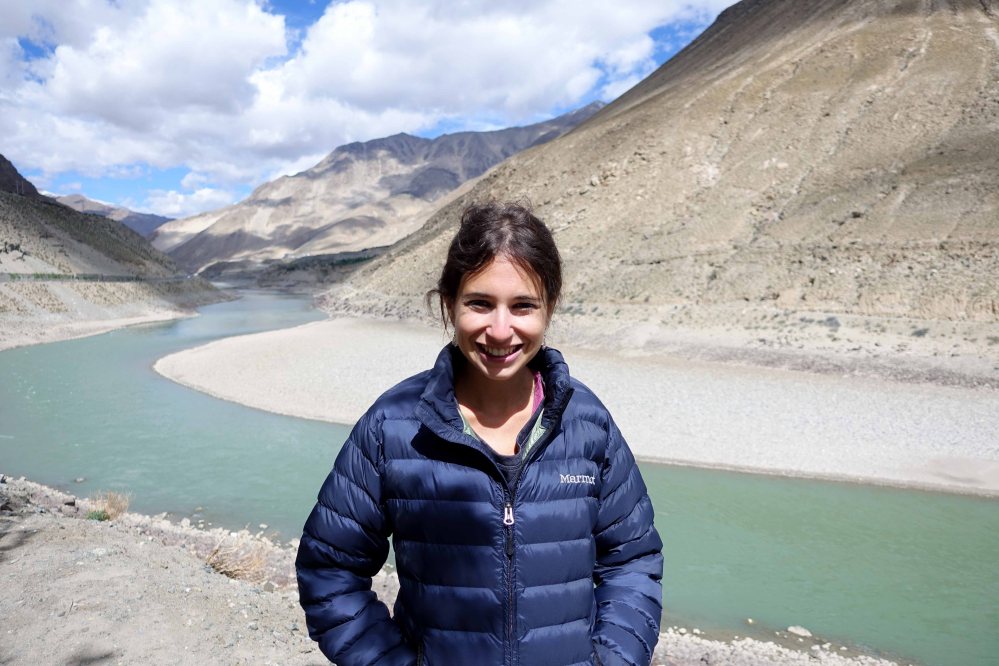 We continued our ride and stopped at another tea shop for lunch, we had some noodle soup with potatoes. These tea houses offer about two things on the menu and the meals are usually about 2 bucks each. The bathroom was so gross there that Sarah decided to just wait until we arrived at our 4 star hotel. Her body has now learned how to absorb poo into her bloodstream instead of “testing the plumbing”.

This hotel is beautiful, it is decorated similarly to all the monasteries we have seen, has a shower with a door and all the amenities! It is probably our nicest hotel thus far on the trip.  It will be quite the contrast to our night tomorrow night in a tent at Everest Base Camp!

Our guide took our passports to get the Aliens travelers permit that will allow us to visit Everest tomorrow. It is a very controlled area and you need another extra permit to visit. That is why many climbers and travelers decide to visit from Nepal side, easier to get there, cheaper, no permit, but harder climb and little worse view.

We then walked about an hour around the Tashilhunpo Monastery, all the circuit around the monastery is full of prayer wheels. Traditionally, the mantra Om Mani Padme Hum is written in Sanskrit on the outside of the wheel. Also sometimes depicted are Dakinis, Protectors and very often the 8 auspicious symbols Ashtamangala. At the core of the cylinder is a “Life Tree” often made of wood or metal with certain mantras written on or wrapped around it. According to the Tibetan Buddhist tradition based on the lineage texts regarding prayer wheels, spinning such a wheel will have much the same meritorious effect as orally reciting the prayers. 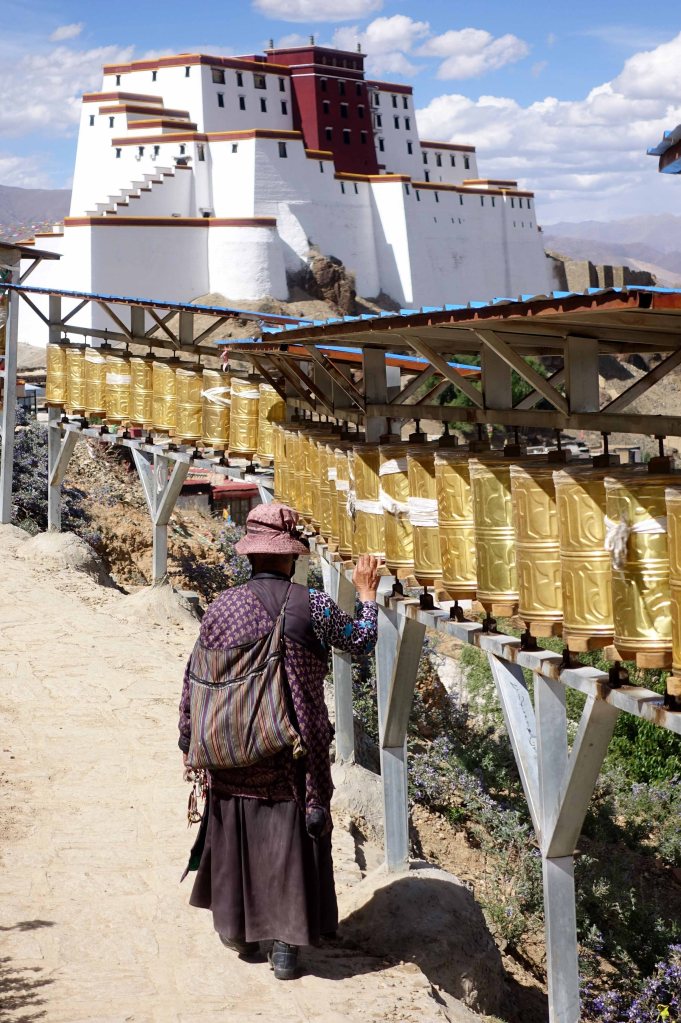 The views from the hike was amazing and you could see the whole city. One of the main buildings is the government palace which is a smaller copy of the Potala palace in Lhasa.

Looking to the other side you can see the monastery siting on the mountain. 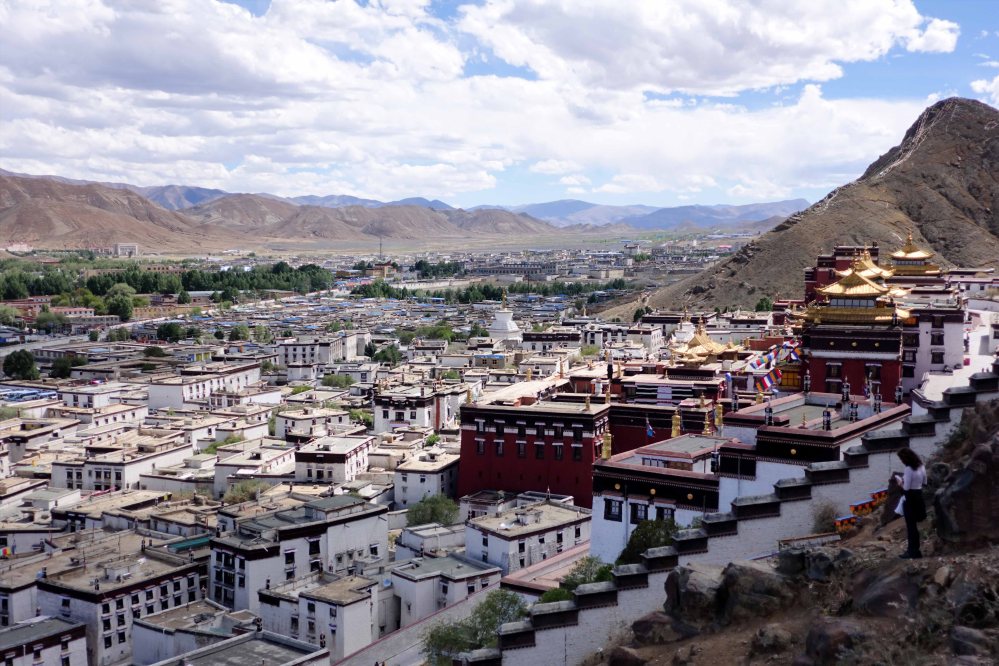 After the hike we visited the old town which was filled with made in china overpriced souvenirs so we really didn’t buy anything. 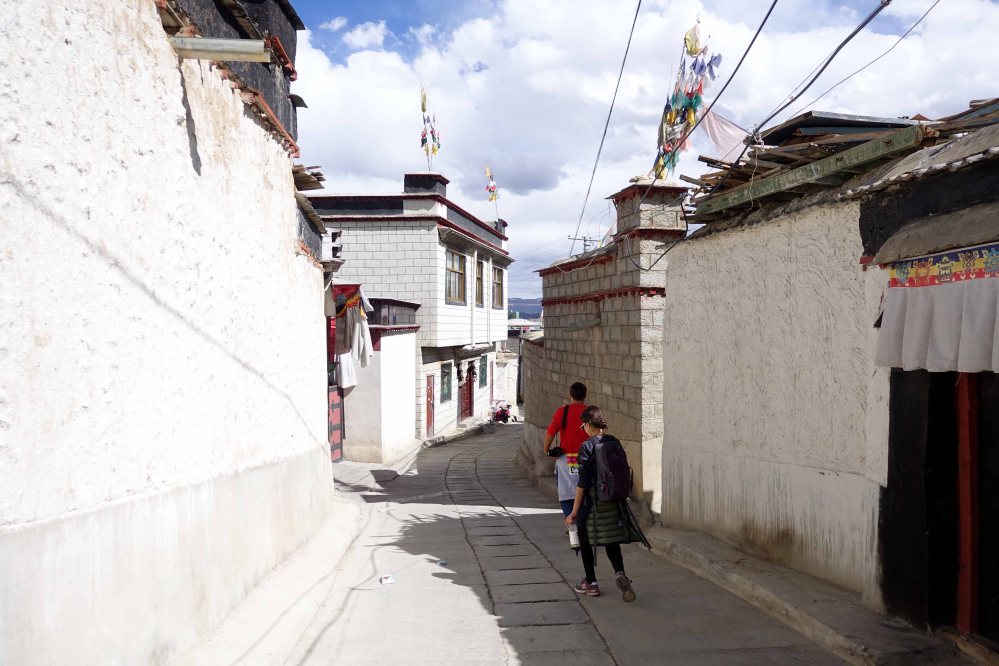 Everywhere is Tibet (and Nepal) they sell prayer flags. We have bought 2 already to place in Everest base camp tomorrow with a nice wish. 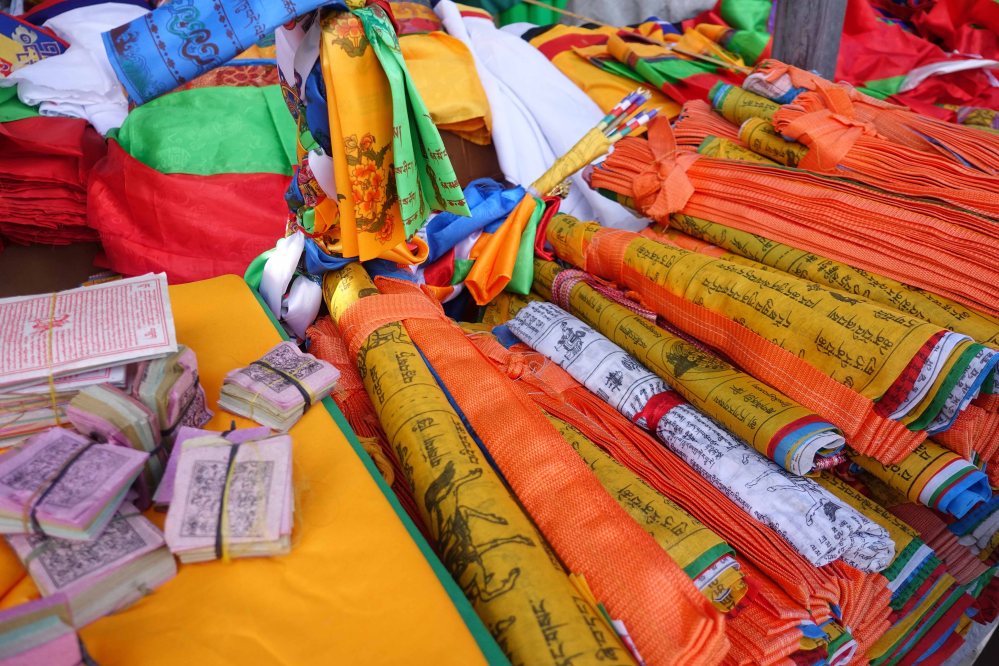 We then walked back to see the actual monastery. By now, everybody in the tour was exhausted of monasteries (besides Amy) as they start to look very similar, but we had to see this one as it is one of the most important ones. 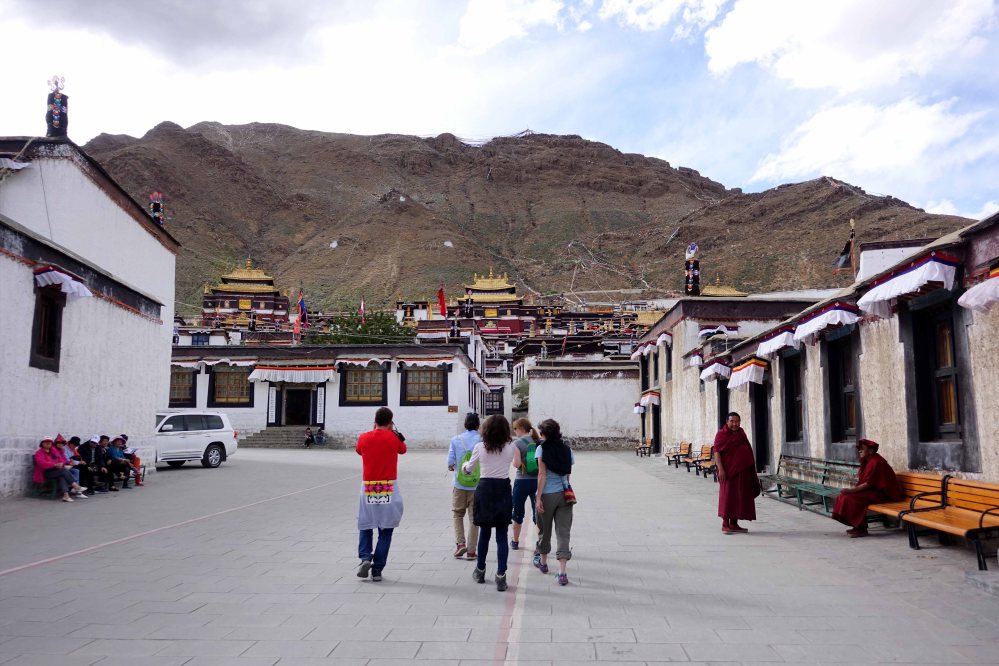 Namgyel didn’t waste time and started explaining all about it.

Tashilhunpo Monastery was founded in 1447 by the 1st Dalai Lama, The monastery is the traditional seat of successive Panchen Lamas, the second highest ranking tulku lineage in the Gelug tradition of Tibetan Buddhism  (first is the Dalai Lama). The “Tashi” or Panchen Lama had temporal power over three small districts, though not over the town of Shigatse itself, which was administered by a dzongpön (prefect) appointed from Lhasa. 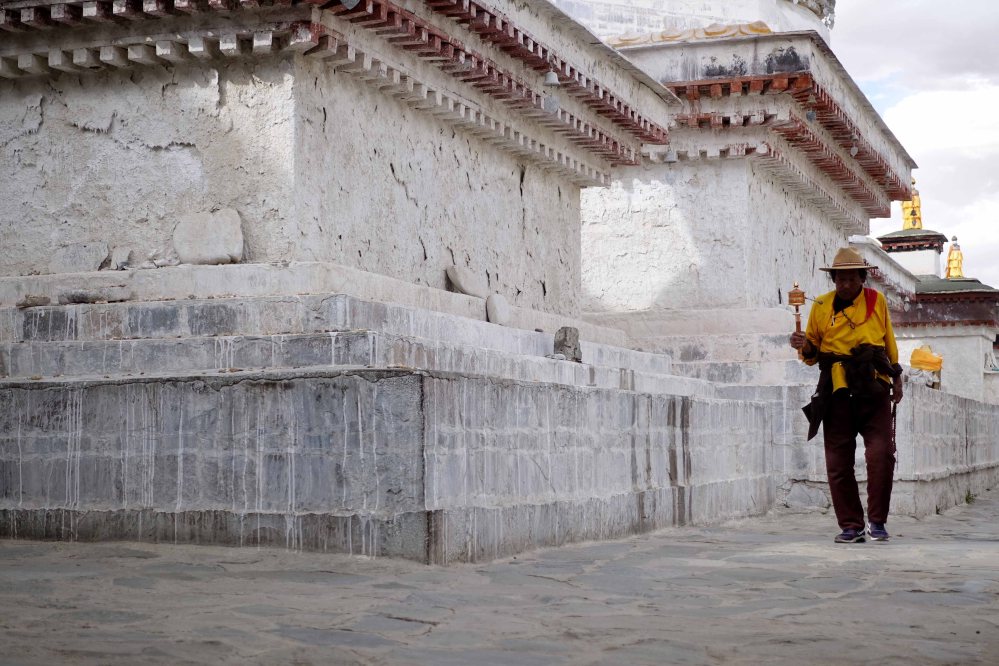 Fortunately, although two-thirds of the buildings were destroyed during the excesses of the Chinese Cultural Revolution, they were mainly the residences for the 4,000 monks and the monastery itself was not as extensively damaged as most other religious structures in Tibet, for it was the seat of the Panchen Lama who remained in Chinese-controlled territory. 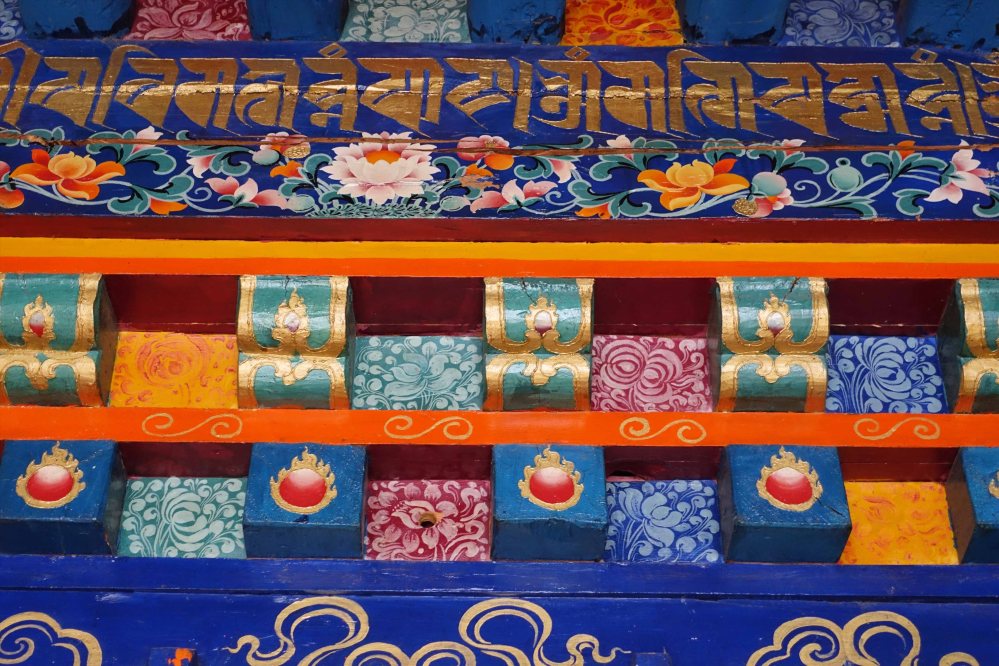 We had dinner at a busy place and sat next to a group that had just returned from Base Camp.  Of course Sarah instantly started making friends and chatting with them and got several helpful tips from their experience. 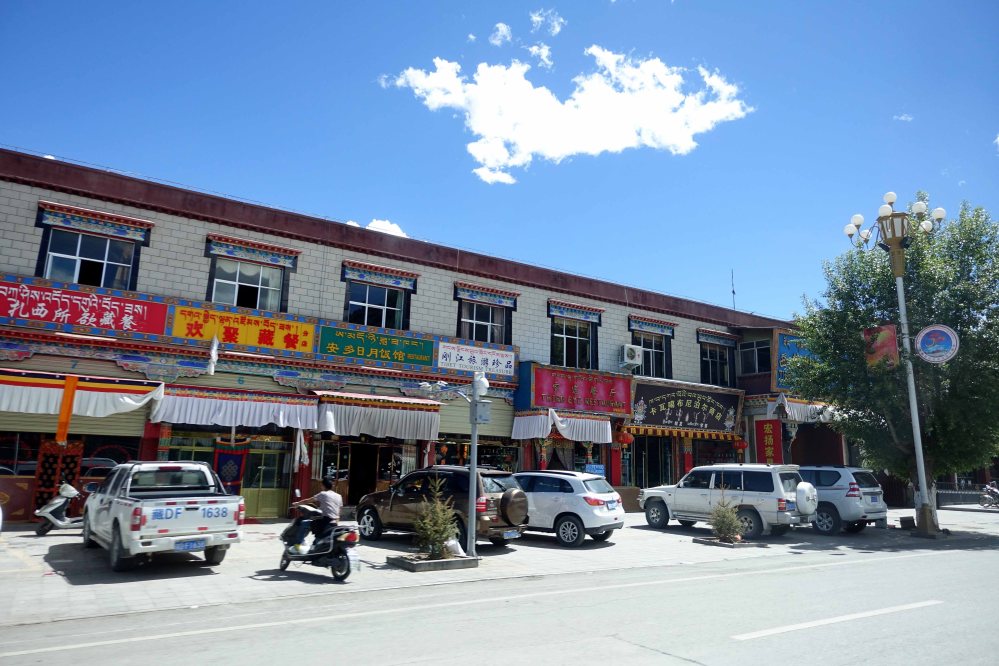 Bonus Pic Of The Day: On our infamous “Toilets Around the World” series, we present you the most annoying part of traveling in Asia in general. Toilet paper does not have any “pre-cuts” so cutting a nice clean square is harder than solving a differential equation on a roller coaster. Also, for some reason they don’t have the carton cylinder in the center making it impossible to rotate. 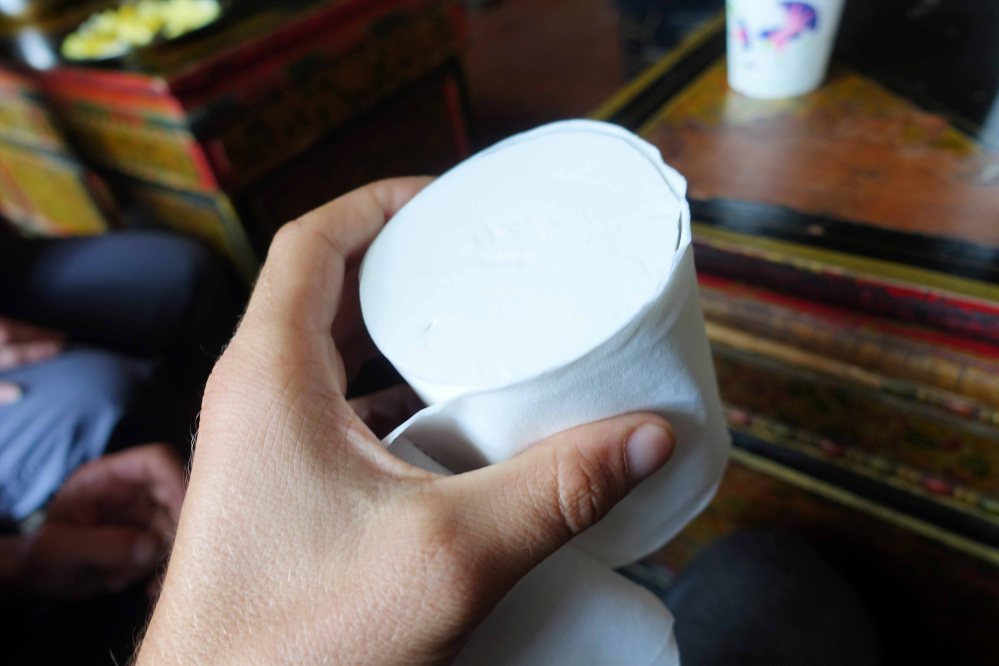