Today we finally met our tour buddies that will be touring with us for the next 8 days! We can only say we are so lucky to get such a nice group, 3 British, 2 Mexicans, 1 Argentinian, 1 Peruvian and 2 Americans make our very diverse group. We hit it off immediately as everybody here has the same travel mentality as us. Most are around our age and very smart responsible travelers, no smelly hippies allowed here!! Our guide Namgyel, a native Tibetan, is absolutely awesome with excellent English, great charisma, cool traditional clothing and especially a very down to earth positive mentality. We are going to learn so much from him!

After breakfast we were picked up by our van to go to Potala Palace. This was the chief residence of the Dalai Lama until the 14th Dalai Lama fled to India during the 1959 Tibetan uprising. It is now a museum and World Heritage Site.

The palace is named after Mount Potalaka, the mythical abode of the bodhisattva Avalokiteśvara. The 5th Dalai Lama started its construction in 1645 after one of his spiritual advisers, Konchog Chophel, pointed out that the site was ideal as a seat of government, situated as it is between Drepung and Sera monasteries and the old city of Lhasa. 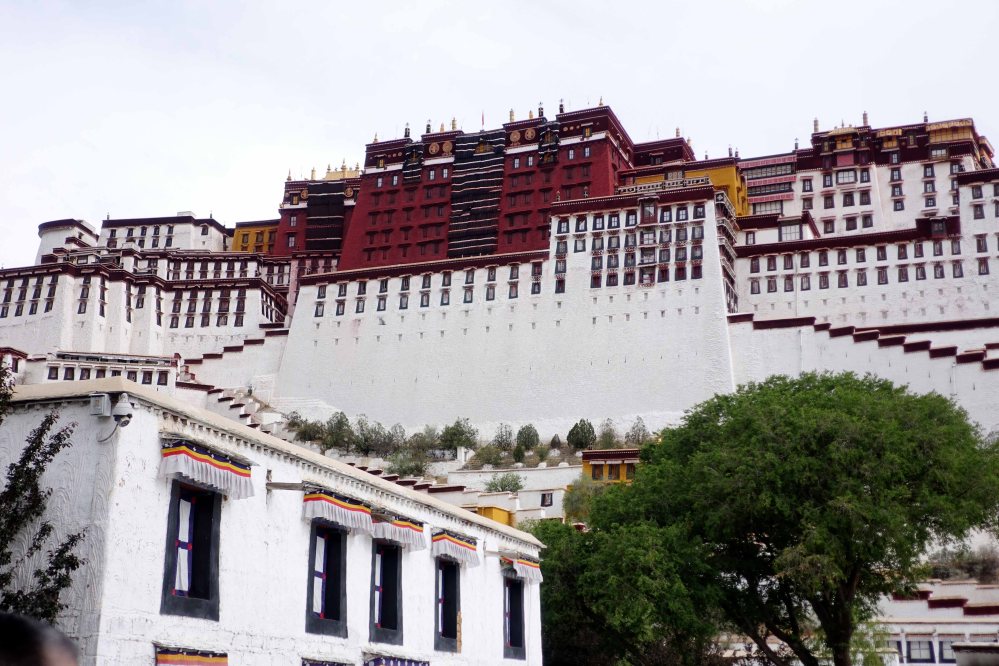 In order to get in you need to show your passport and go through security. The lines were big but inside the palace it didn’t feel crowded as they only allow 2300 people a day. 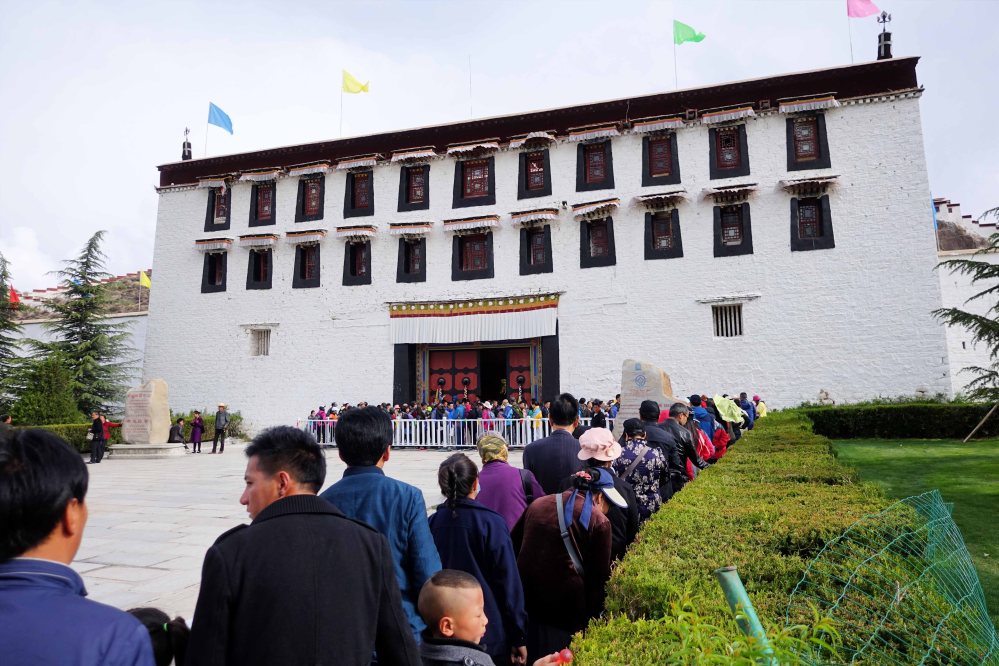 Climbing the stairs up at this altitude 12,000 ft. feels like a thousand needles are piercing your lungs. We haven’t acclimatized to this altitude yet and we are still feeling not at 100%. The palace was constructed by volunteers and they say every brick has a wish from the person who carried it!

Tradition has it that the three main hills of Lhasa represent the “Three Protectors of Tibet”. Chokpori, just to the south of the Potala, is the soul-mountain of Vajrapani (the protector and guide of Gautama Buddha), Pongwari that of Manjusri (transcendent wisdom), and Marpori, the hill on which the Potala sands, represents Avalokiteśvara (the compassion of all Buddhas).

Inside the palace you are not allowed to take photos, not because of spiritual reasons but because the Chinese will sell you the postcards outside.

At the very entrance there is a frame housing the hand prints of the Dalai Lama #13 (Dalai Lama means Ocean of Knowledge) his hands are so unique and the shape of the lines in his palm have the shape of a lotus flower. This is one of the early indicators of a Dalai Lama. Basically every inch inside the palace is decorated with highly intricate paintings, engravings, jewelry and shrines. It has the worshiping chapels and tombs of every Dalai Lama.

Our guide specifically told us he does not mind us taking photos inside as it is not an insult or anything, it is just greed. Still, Eitan did not want to get into trouble so surprisingly he still did not take any pics but you can google  it!

Most of the Tibetan roofs and walls are made of this wood that is a really good cold insulator. This tree can grow in high altitude thus perfect for using it for construction. People think that sticking coins in there will bring them good luck. 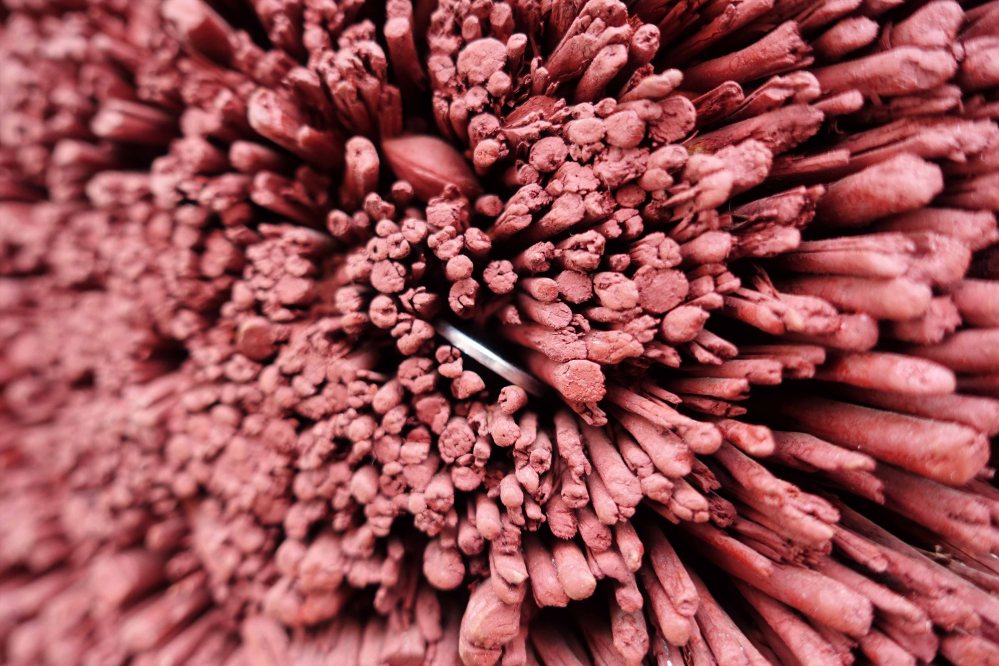 After the visit to the most important building in Tibet we went to eat to a local teahouse, this is a place where you can eat traditional food while enjoying a milk tea. We got (because there was no other option) chili potatoes and rice, it was delicious and very filling.

This restaurant happens to be located inside the building where our guide grew up. We asked to see his house but explained that no foreign visitors can visit local houses, if he gets caught taking us he will go to jail.

Our next stop was the Sera Monastery, one of the 3 great monasteries of the order of the yellow hats (Gelugkpa) in Tibet. The monastery is basically a school for monks where they learn and debate the holy scripts and they mediate and study to find the truth in life. Again, no photos allowed inside and it was beautiful so you now have to come see it.

During the 1959 revolt in Lhasa, Sera monastery suffered severe damage, with its colleges destroyed and hundreds of monks killed. After the Dalai Lama took asylum in India, many of the monks of Sera who survived the attack moved to Bylakuppe in Mysore, India. After initial tribulations, they established a parallel Sera Monastery with Sera Me and Sera Je colleges and a Great Assembly Hall on similar lines to the original monastery, with help from the Government of India.

Next the main study/praying hall there is the debate plaza. Debates among monks on the Buddhist doctrines are integral to the learning process in the colleges in the Sera Monastery complex. This facilitates better comprehension of the Buddhist philosophy to attain higher levels of study. This debating tradition supplemented with gestures is said to be exclusive to this monastery. After, they will have to pass an oral test in front of all the masters and about 500 monks, depending on their answers they might gain a higher monk rank. The current Dalai Lama (Dalai Lama number 14) had to go through this process as well. 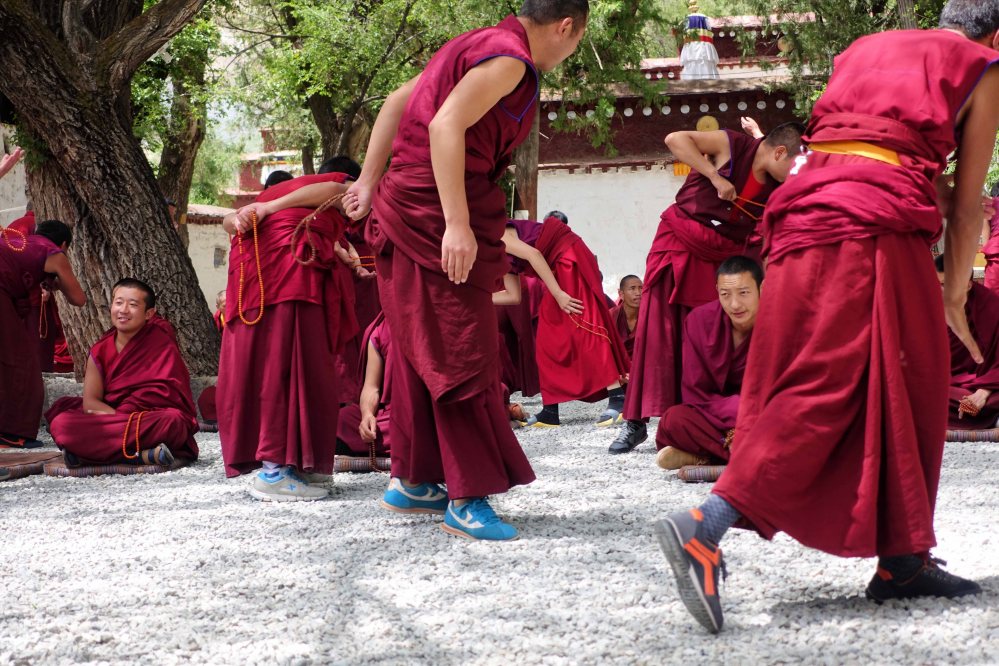 Parents bring their children to the Sera Monastery for blessing by monks; they put  black spot in their noses. In this way, children should stay safe, avoid nightmares or behave better, etc. It is very similar to what we saw in India, but they put the black paint on the babies eyes.

After that bizarre experience, we headed back to the hotel to relax for a little bit. The whole group went to eat at a family run restaurant where you literally sit in their house. The food was very impressive and the atmosphere authentic.

After that delicious dinner we walked to the Potala Palace front park to see it at night all illuminated. It is breathtaking how big this building is. We are standing in the Liberation Square built by the Chinese to commemorate the liberation of Tibet from the “evil” Dalai Lama. This place looks like a mini Tiananmen Square, very communist looking, spotless and full of police.

Bonus Pic Of The Day: In China (so Tibet as well) Google, Facebook and multiple other websites are blocked and inaccessible. In order to use them people rely on VPN’s or services that “hide” your IP address so it looks like you are surfing the web from another country.

Even though there are multiple English speaking people in Tibet they still rely on online translations for important signs. The usually use Baidu.com which is the equivalent of google but far worse! This is a perfect example of what a bad translated sign looks like (special attention to #3 and #4).