Editors note: Many people are asking us who is writing the blog, so I will explain the behind the scenes of who is responsible for this beautiful literature… Basically, we both tried to write it when we have time at trains, hotel nights, airports, etc.. We then give it to the other person to add a few things we have forgotten and to check for grammar, that’s correct, Eitan needs to check Sarah’s grammar… In English.

So there are a few rules of thumb to recognize very easily who wrote what part: If its funny, witty, with bad grammar, racist and usually insulting to the local culture it was written by Eitan. If its a nice comment, mellow, often very simple and not very informative, for example: “We went to a restaurant to eat, then we walked in a street and then we visited a museum”… then it was probably Sarah! Sarah had an intervention early on in the trip where she was told she needed to add more substance to the writing in order to give a deeper description to the photo, so she has gotten better. If you have any comment/suggestion on how to improve our blog, please write us a comment! Also, now you can guess who wrote this one…

After a terrible night sleep as we baked we began the day celebrating Eitan’s 29th birthday feeling hot! Our driver picked us up to take us what is supposedly the best fort to see in Rajasthan, the fort of Chittorgarh. To be honest we were very lazy for another fort and it wasn’t Eitan’s dream destination for his birthday but we had heard it’s good and on the way to Udaipur so we couldn’t not go. It was a 3 hour very bumpy ride there and even though cars here have a/c, it is not strong enough to cool the car.

The fort, popularly known as Chittor, was the capital of Mewar. it was finally abandoned in 1568 after the siege by Emperor Akbar. It sprawls majestically over a hill 180 m (590.6 ft) in height spread over an area of 691.9 acres above the plains of the valley drained by the Berach River. The fort was huge so having the driver was a great idea because he drove us around to the best spots without wasting time. The fort was impressive to visit, most of the structures are still intact. 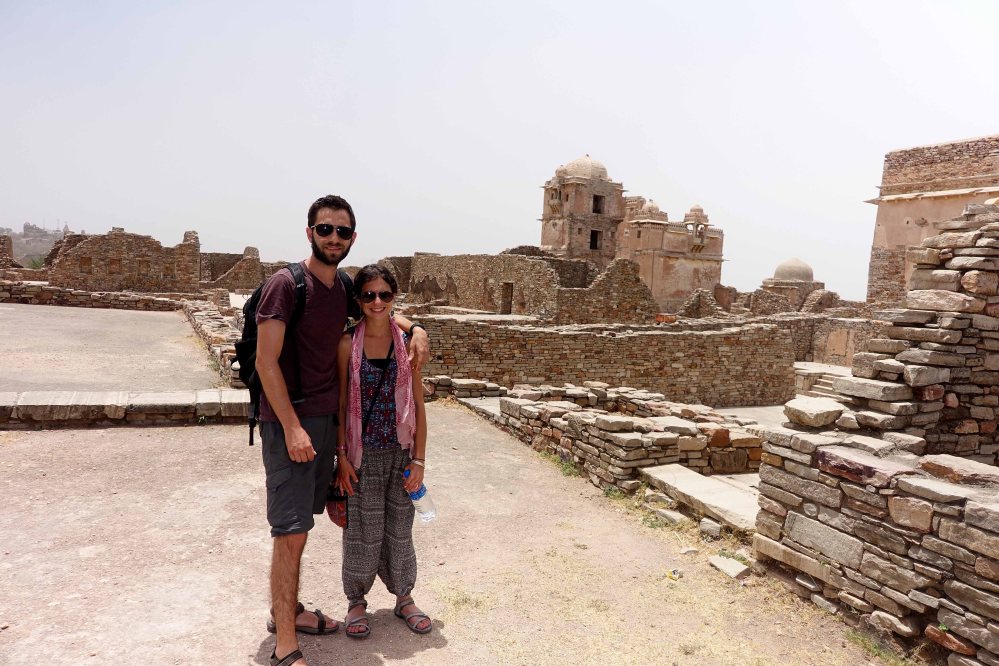 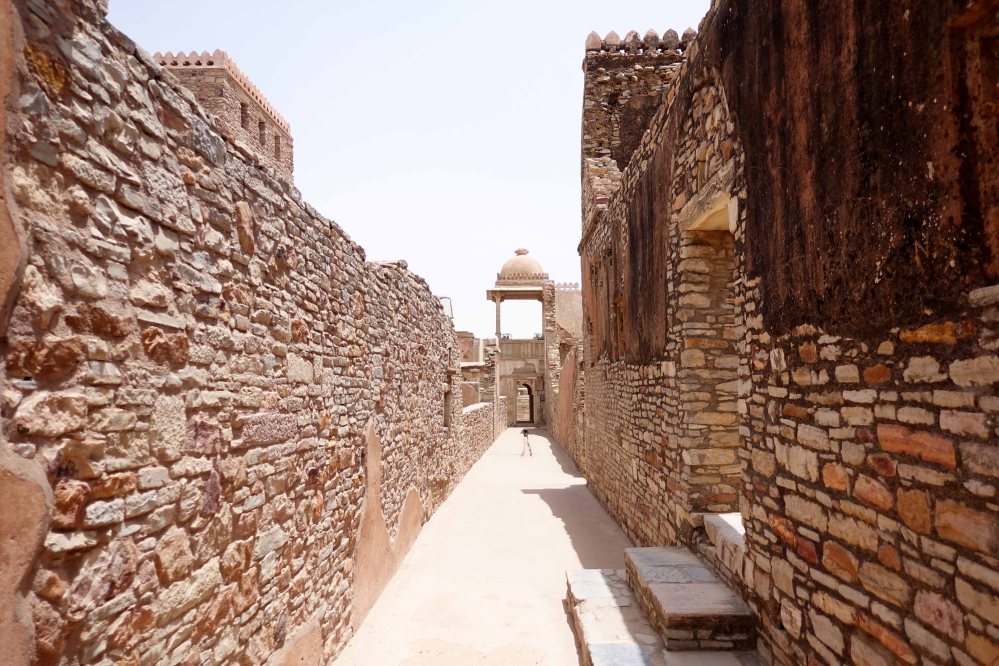 In one area there were tons of black face monkeys which we may have enjoyed more than the actual fort, these guys are not aggressive and actually you can get pretty close to them without getting attacked, not like those asshole monkeys in Bali.

There is this amazing tower, the Vijay Stambha. It was constructed by Mewar king Rana Kumbha in 1448 to commemorate his victory over the combined armies of Malwa and Gujarat led by Mahmud Khilji. The tower is dedicated to Vishnu. You can climb to the top to see the view. Sarah was not feeling athletic today so she waited for Eitan at the bottom. Climbing this tower proved to be extremely difficult because of the Indian lack of personal space awareness. You see, the stairs here are extremely narrow, but somehow they think that multiple people can go up and down at the same f*&*ing time without an orderly fashion. Sometimes I wonder if it’s an actual cultural phenomenon (which I’m almost ok with) or if some people are just thaaat stupid. 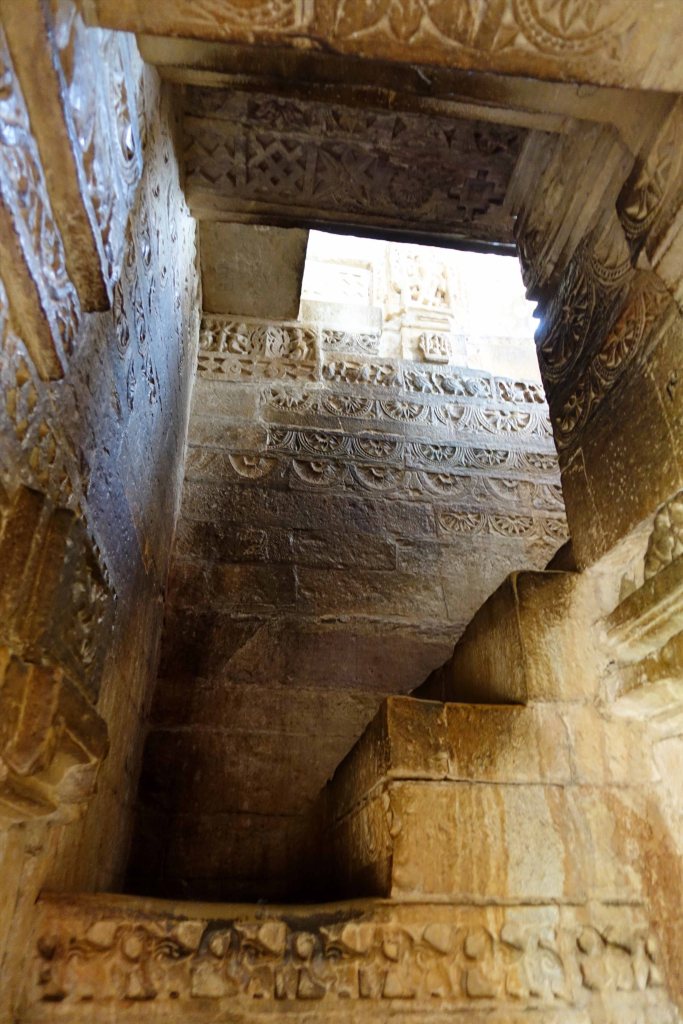 We were the usual white celebs again but when a teenager crossed the line when he attempted to kiss Sarah on the cheek while Eitan was still going down the tower (Eitan wasn’t there, otherwise he would have been Bruce Leeing teenage Indians here and there, or at least trying), we left that area very fast to avoid any further trouble. We were there for about 2 hours, we probably did this fort as efficiently as possible while still being able to appreciate all that was there.

We visited other palaces, temples and ruins inside the fort, but I am not going to get you bored with information your don’t want to hear anyways. So here are the photos instead: 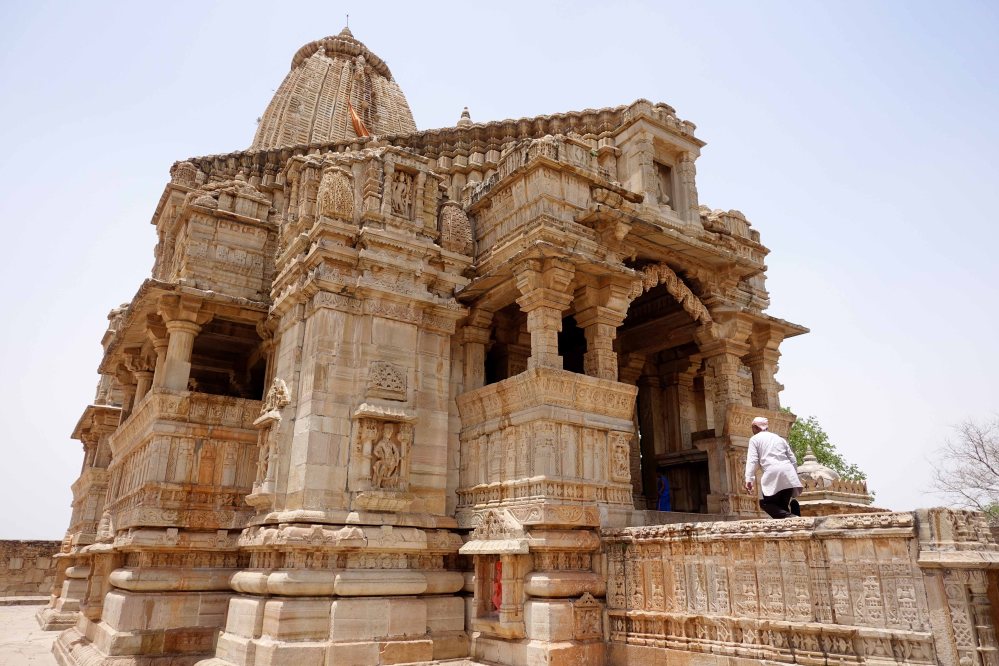 These are the toilets used by people living in the fort hundreds of years ago; this are clearly “heritage” toilets and part of the historical monument, but this does not stop the local visitors to still use them on a daily basis. You can imagine the smell in there as there is no real drainage.

We visited the Gaumukh Reservoir, which is where they stored the water to use at the fort. The color is beautiful and definitely fine to drink as exemplified by our friendly locals here; you can even use it as a margarita mix for great flavor! 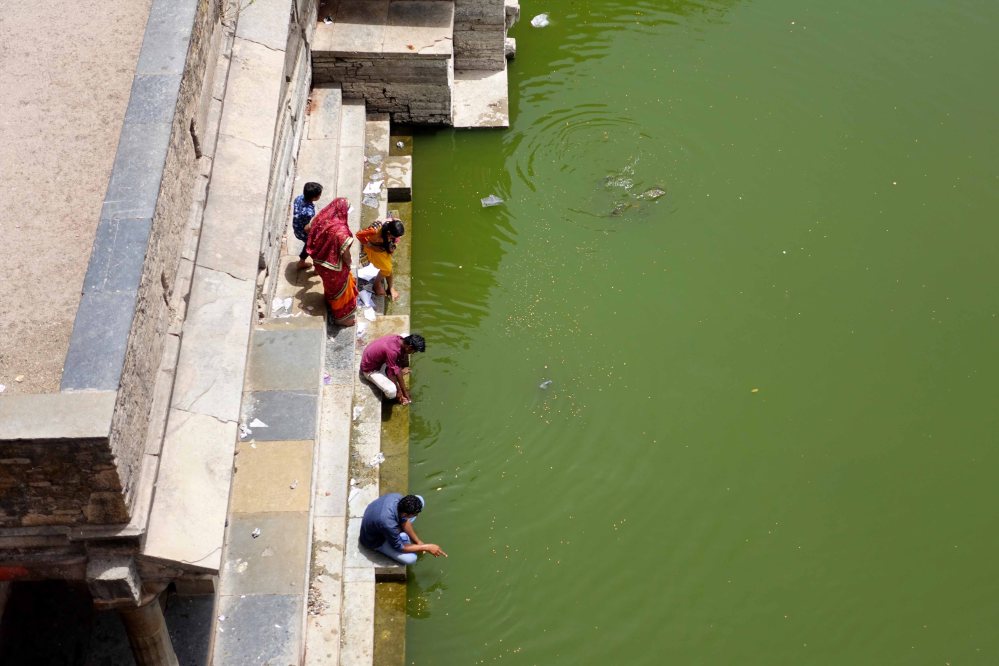 We then had another 1.5 hour drive to “The White City” Udaipur.  Everyone has been telling us that it is the nicest city in Rajasthan and they were right!  It is calm, people are friendly, with clean streets and 5 beautiful lakes. The main lake, Pichola, is surrounded by several beautiful white buildings (mostly very fancy hotels). Our hotel is inside a heritage building that was some kind of palace long time ago, the architecture here is beautiful and the view phenomenal. What we find funny is that everyone who has told us how much they love India have all said that Udaipur is their favorite city, but this city doesn’t feel at all like you are India, this feel more like Europe than anything else, so we find that a little bit hypocritical. Hey, I love seafood, but I only eat Tilapia! you get it? same thing. 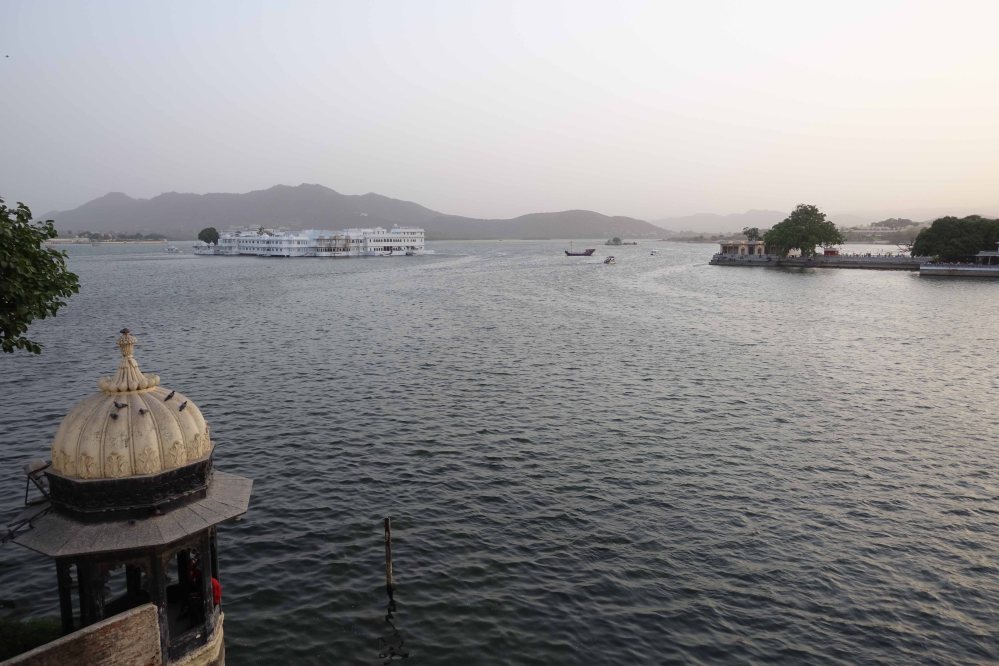 We again went to a trip advisor place for dinner but it was closed because it was off season so we ended up eating at the hotel.  It ended up being a very nice dinner to celebrate Eitan’s birthday. We got to sit on comfy pillows on the balcony with a beautiful view of the lake. We even splurged and each got a beverage (this may be the first restaurant with a full bar we have been around here!).  Sarah was very happy because she got to have one of her favorites, a Bloody Mary that was actually good!  We relaxed sitting there and appreciated the nice and cool breeze since we were on the lake

Around sunset time, you can see the bats coming out to eat, there are thousands of them putting a nice show for us.  We told the waiter it was Eitan’s birthday and we quickly learned that the concept of giving a customer a free dessert for their birthday is something that doesn’t even cross their minds here!  Due to a lack of sleep last night, not having any internet and Eitan being older we slept early and had a great night sleep!

Bonus Pic Of The Day: I will not even go into detail here, a picture is worth a 1000 words…

I changed my mind, I will go into detail here…. People in India looooove to spit in the street, it is usually Paan (the tobacco chewy thing they use instead of coffee to stay awake). My shoe has come very close to be on the receiving end of that spit, but luckily it has missed it every time. They just don’t care, they don’t even look where are they spiting. So obviously they need signs to let them know that spiting inside in a National Monument is not allowed, like if its not common sense already. But hey, not that they care about the sign anyways, I think I’m one of the first ones to even notice them! 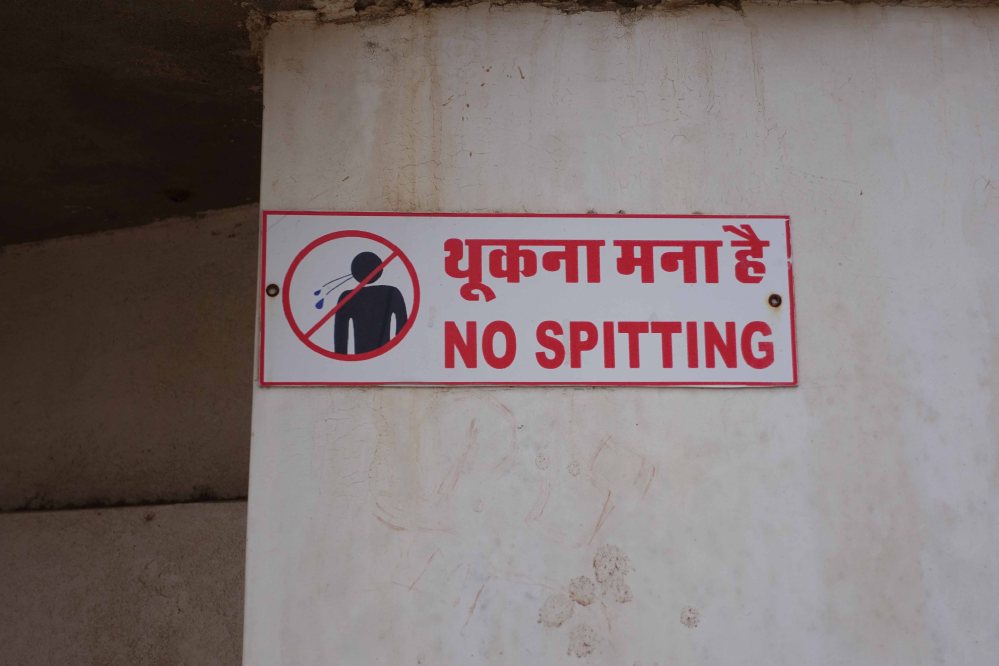