Disclaimer: No idea how, but all this happened in a single day. Enjoy!

We learned how to say thank you in Burmese really fast, “Cezu Tinbadeh”, when the locals said it to us it really sounded like “Cheese and Tamales”, so that is what we said every time we wanted to thank a local person. We got more than a few laughs but most were appreciative that we were trying to speak their language.

Remember Myanmar has almost no tourism, so on the newspaper you can see news articles about tourists visiting parts of Myanmar. Bizarre..

Today is our last day in Mandalay and we wanted to visit the sights around the city so we hired a driver for the day. It cost around $30 for all day touring and its basically the only way to do it fast.

We stopped at the gold paper workshop where they hammer down thin pieces of gold for hours until they are extremely thin. They sell this in the temples so you can put them in Buddha for good luck. Everything is made by hand and its a loooong process. 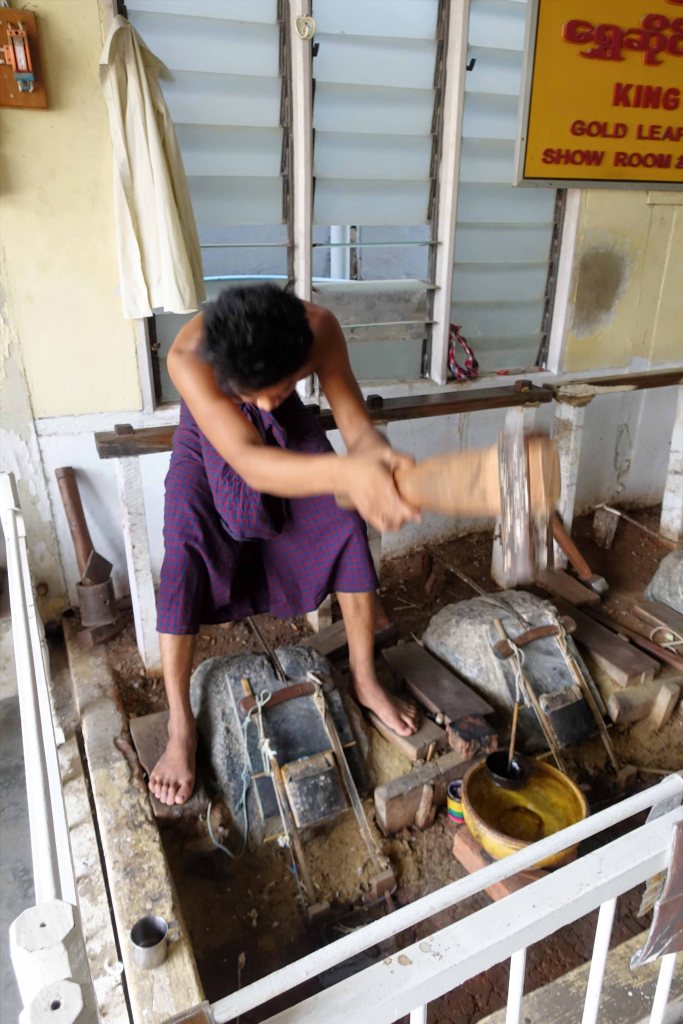 They even put Gold pieces on our foreheads and told us it is edible.  My gold piece fell off before I got to taste it.

Our first temple of the day (there is no temple-free day in Myanmar) was the holiest one in Mandalay which was apparent because it was packed with locals but not many tourists.  Its so holy that only men are allowed to get close to the Buddha (something you don’t see anywhere else we’ve been).  Sarah was not thrilled by this at all, but Eitan was raving of his gender superiority (just kidding, we both hate the gender inequality that religions sometimes practice, but we needed to respect the ancient backward thinking of some cultures while we are in their temples).

This golden Buddha is around 100 years old, but it has been growing by the years because of all the gold papers people stick on his body. 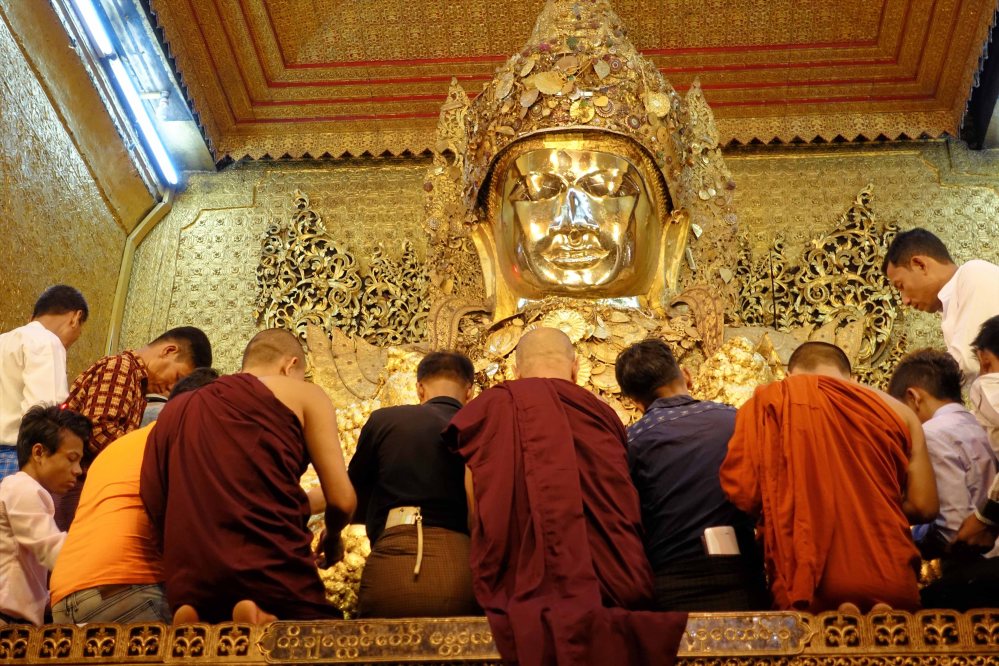 During the temple visit we were lucky that we were able to see the “becoming monks” ceremony.  Young kids, around the age of 10 get dressed up in traditional clothes and lots of make up (very female looking). All their families accompany them to temple for praying and after to the monastery to shave their heads and become “novice monks”. 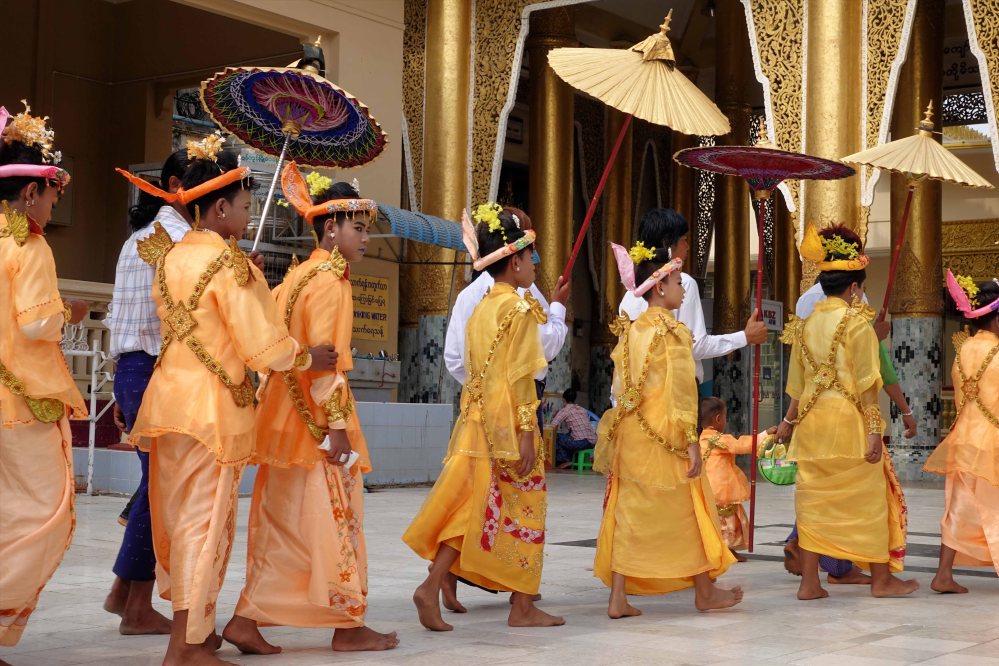 We then went to the Mahagandayon Monastary, home of 2000 monks at any given time. We got to see the real lives of the monks, we have been extremely fascinated about them the past few weeks. We started the visit with the kitchen where they prepare huge meals, not very hygienic but I guess they are used to it.

They eat breakfast at 6:00 am, lunch at 10:30am and then don’t eat again until breakfast the next day at breakfast.  There were hundreds of monks lined up to eat and the whole meal looked like one big ritual.  But one thing we were especially amazed by was they ate in about 10 minutes leaving tons of leftover food and given they don’t eat again in almost 24 hours we expected this to be a meal of massive consumption.

The novice monks (kids) wear white robes, poor kids will never be able to play videogames. Temples and monasteries are an integral part of life in Myanmar. They accommodate about half a million males, who are either vocational monks or novices, and around 50,000 nuns. That is: roughly one percent of the population actually lives in one of the many monasteries or nunneries, completely dependent on the laity for all their material needs.

Our guide told us they can eat leftovers from the meal until noon but beginning at noon they cant eat anything.

We then went to another temple with 45 Buddhas, we sure felt we needed to see more Buddhas so were glad this temple had 45 sitting Buddhas!….But that being said it was quite beautiful. 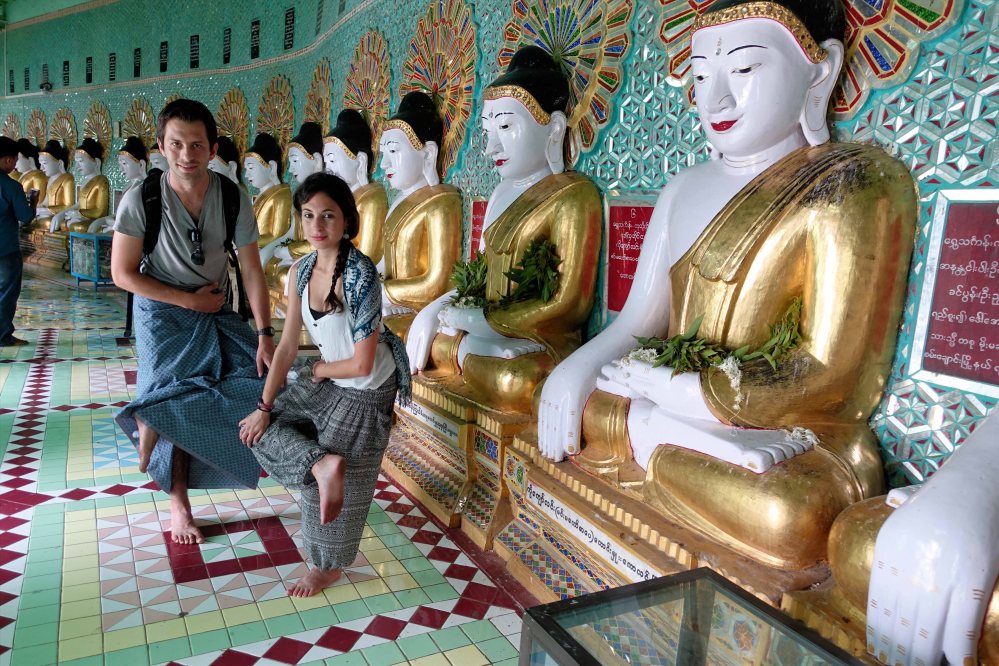 Our awesome guide/driver who went above and beyond to explain everything in full detail.

We stopped on a viewpoint to watch the river and the city of Amarapura in the horizon:

On the way to the second monastery, we stopped in the middle of the road so we can see a cows race. There was some betting going on and these animals are faster that I thought. This is definitely a unique event we will likely never ever see again.

We took a small boat that will take to us the other side of the river in order to visit 4 famous sites around Inwa. 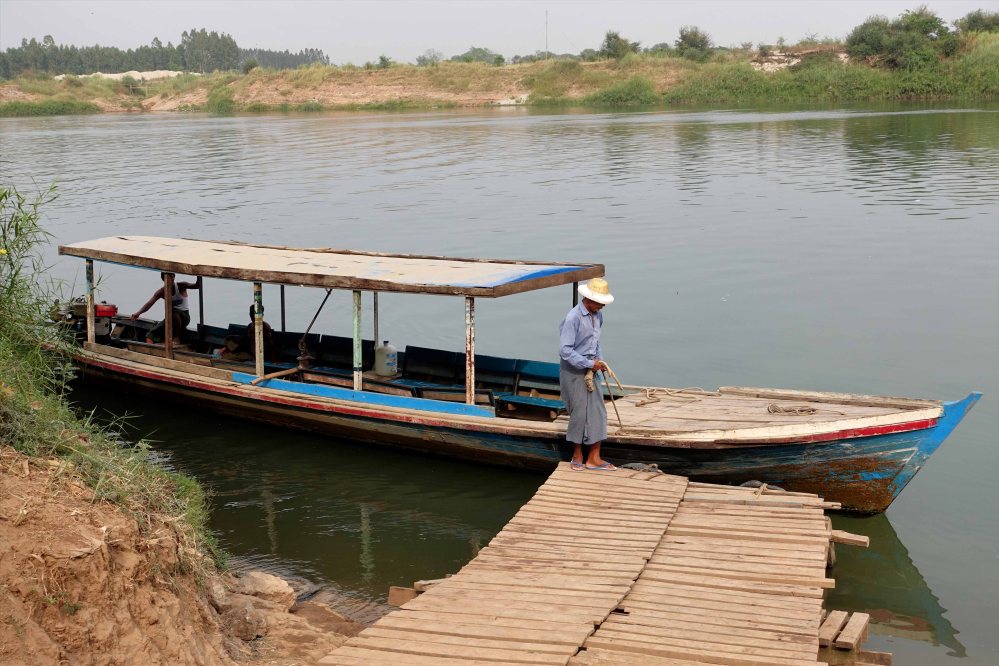 We then hired a horse cart for 2 hours to take us around this places so we don’t have to walk. It was too hot and we are lazy. There were about 2 other couples that were visiting the same sites.

You need to be very careful walking barefoot here as there are a lot of rusted nails protruding from the floor. The tradition and need to pay respect in temples by taking off your shoes truly can be a challenge sometimes! 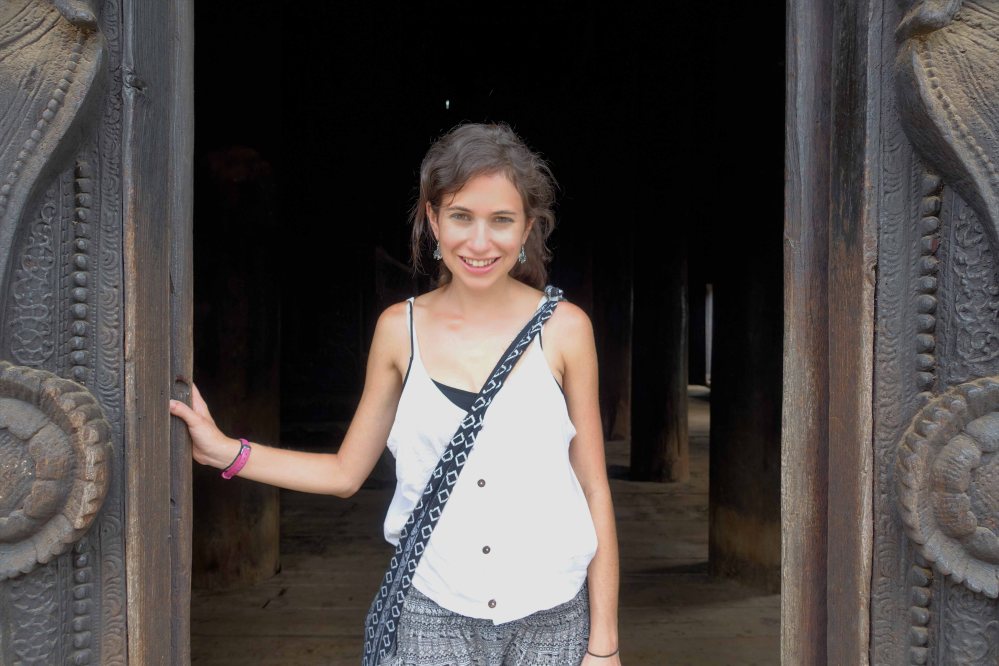 Inside the monastery, there is a monk school and we were lucky to be able to walk  into a class. There is not much discipline going on in there and probably they will never learn the map that is hanging on the wall. But A- for the effort. The kid that was completely asleep we found especially funny.

Me Nu’s Brick Monastery was different and beautiful. Creepy at times as we were the only ones there. 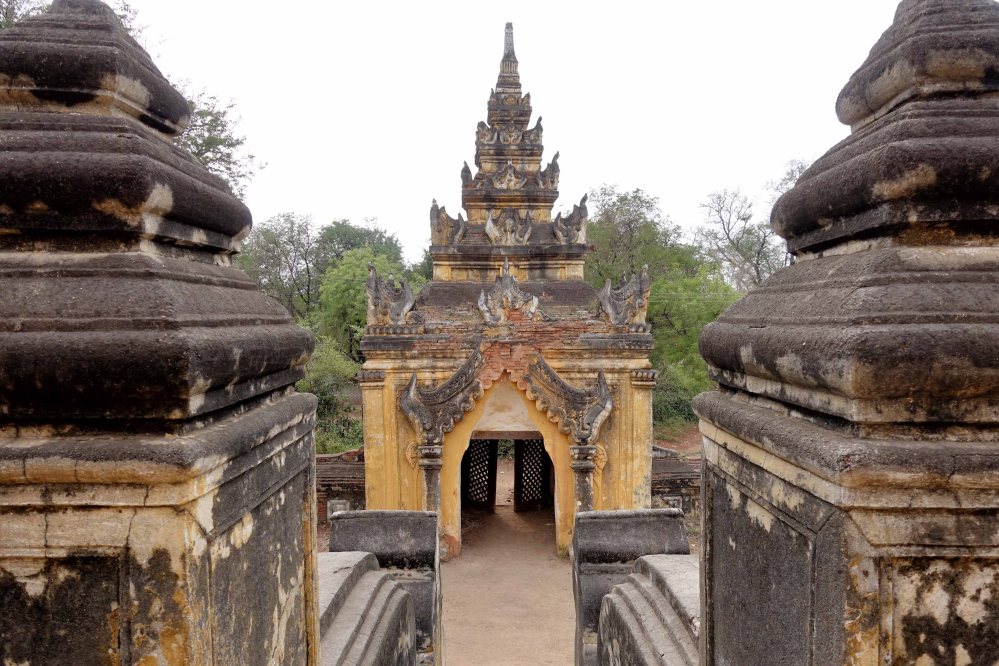 Ava Palace site was the next stop where this watchtower is the only remaining building left. You cannot climb it for obvious reasons so it took about 17 seconds to walk around it.

On the way back we stopped at a silk and cotton factory, they were making some Longyis as well. It was very interesting to see how they know what color string to use next. It looks like music sheets. 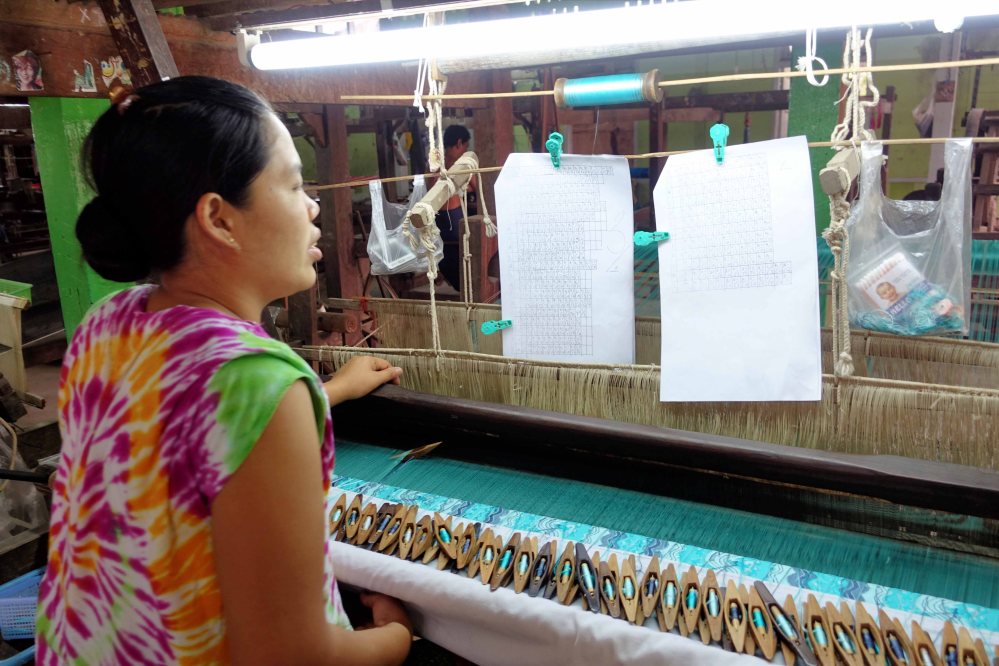 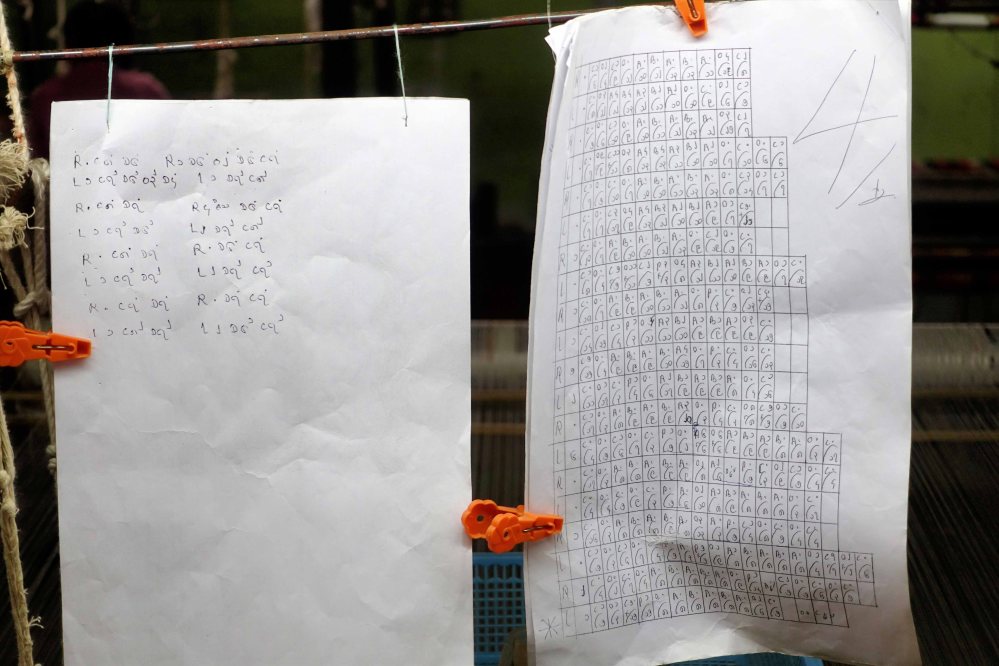 While driving we needed to stop because of a parade. Taking a closer look we saw that it was another “becoming monk” ceremony where the kids parade in beautiful carts until they reach the monastery. 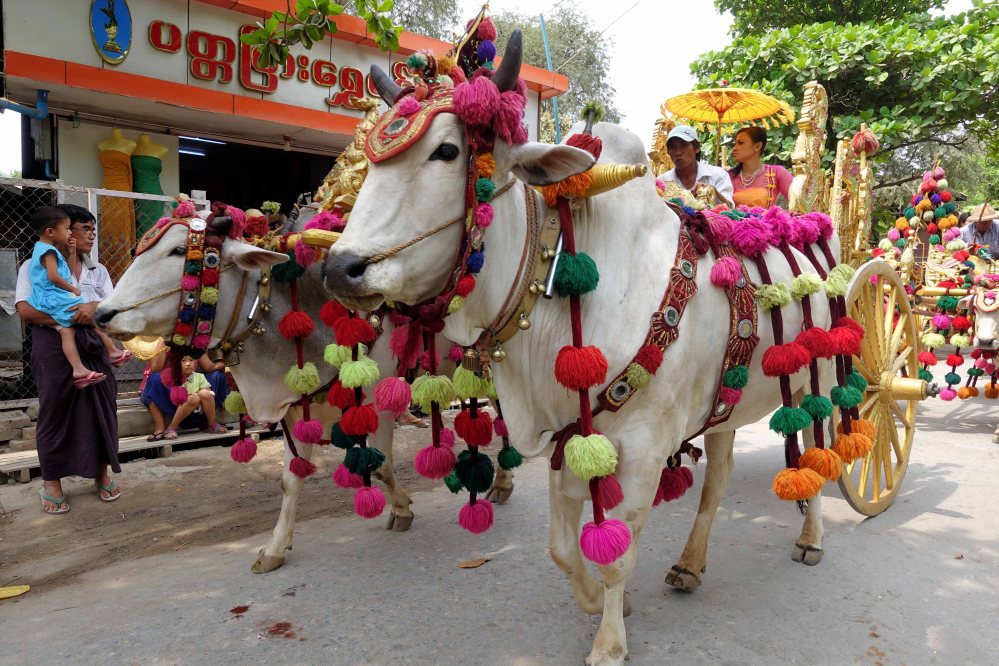 Our second tourist trap of today was the wood workshop where you can enjoy child labor at its best and buy some marionettes after. 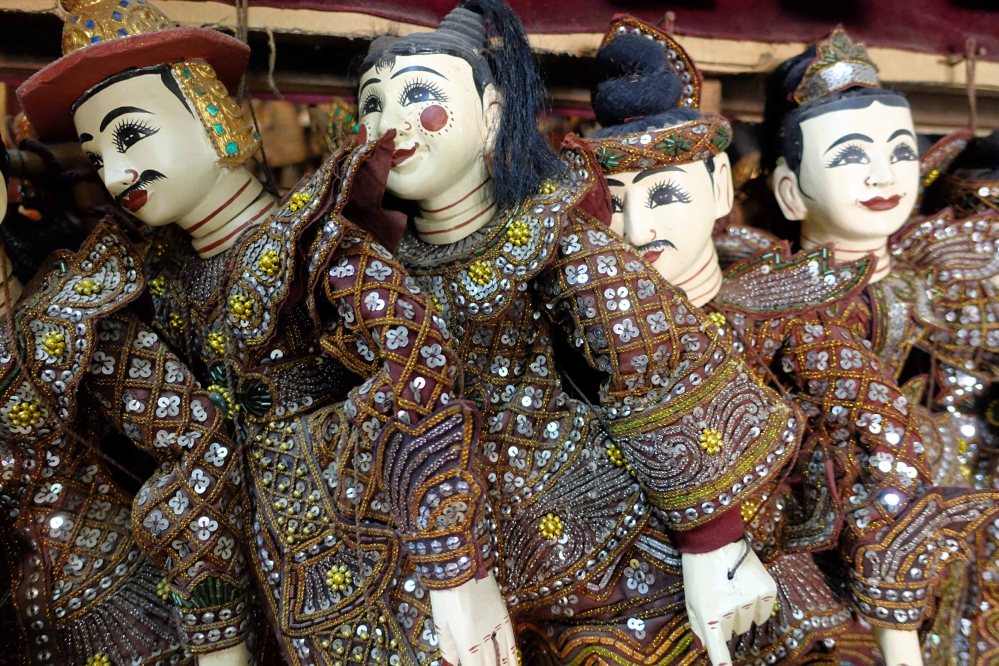 The last stop of the day was the U-Bein bridge. This bridge is on top the Taungthaman Lake and with 1.2-kilometres long (0.75 mi) is believed to be the oldest and longest teakwood bridge in the world (Built in 1850).

The bridge was built from wood reclaimed from the former royal palace in Inwa. It features 1,086 pillars that stretch out of the water, some of which have been replaced with concrete. Though the bridge largely remains intact, there are fears that an increasing number of the pillars are becoming dangerously decayed.

We walked the bridge twice to wait until sunset, we also walked below the bridge because this month the lake is still low.

Once sunset was happening, we sat on the river to enjoy a Myanmar beer that by the way  tasted like cow’s pee. 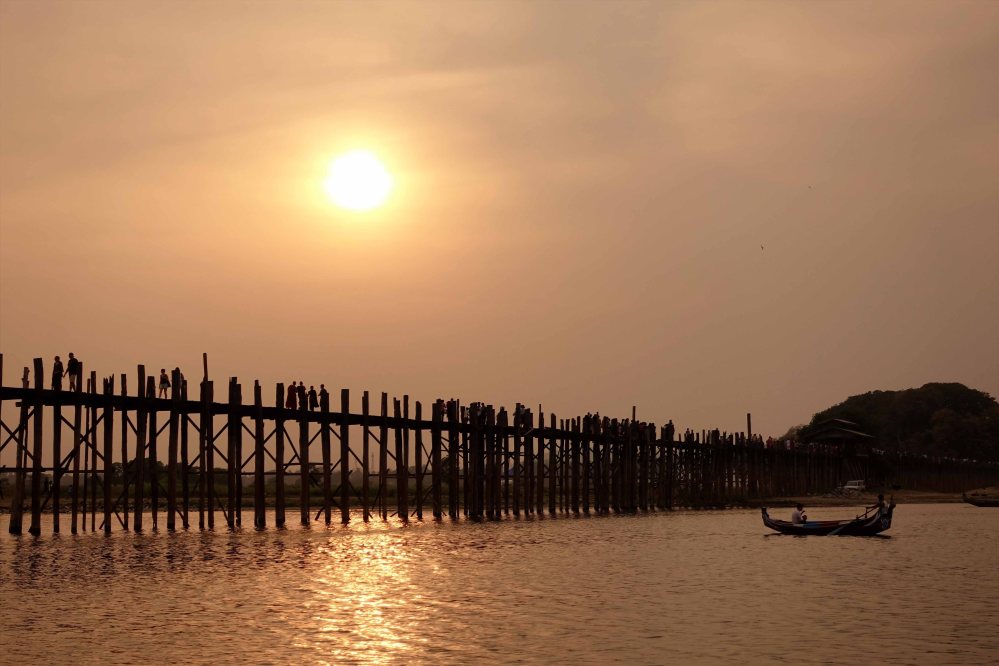 We asked our driver to drop us off at the same Burmese food restaurant from the first night. We got some beef curry and other small dishes. Delicious again!  And our driver for the day was more than just a driver, he explained  a lot and really served as a guide.  The one challenge was that we only could understand about 50 percent of what he said.  Our favorite part was when he would start to laugh a lot when we didnt realize it was funny but we just joined in with the laughter!

And that’s it of Myamnar, tomorrow we leave for Sri Lanka (stop over in Bangkok). We absolutely LOVED this place. Everybody was genuinely nice to us, the lack of tourism, the weirdness of Burmese culture, the temple overdose, the food that we didn’t know what we were eating. It was just a magical place worth visiting.

Please, if you are reading this and you are planing a vacation to South East Asia, skip Thailand, come here instead… you will not regret it!

Bonus Pic of the Day: The currency in Myanmar is the Kyat, pronounced “Chat”. They don’t have coins which is a smart thing and if for some reason you withdraw more Kyats than needed, consider yourself the permanent owner of that money, nobody will exchange them back to dollars; not even at the airport. 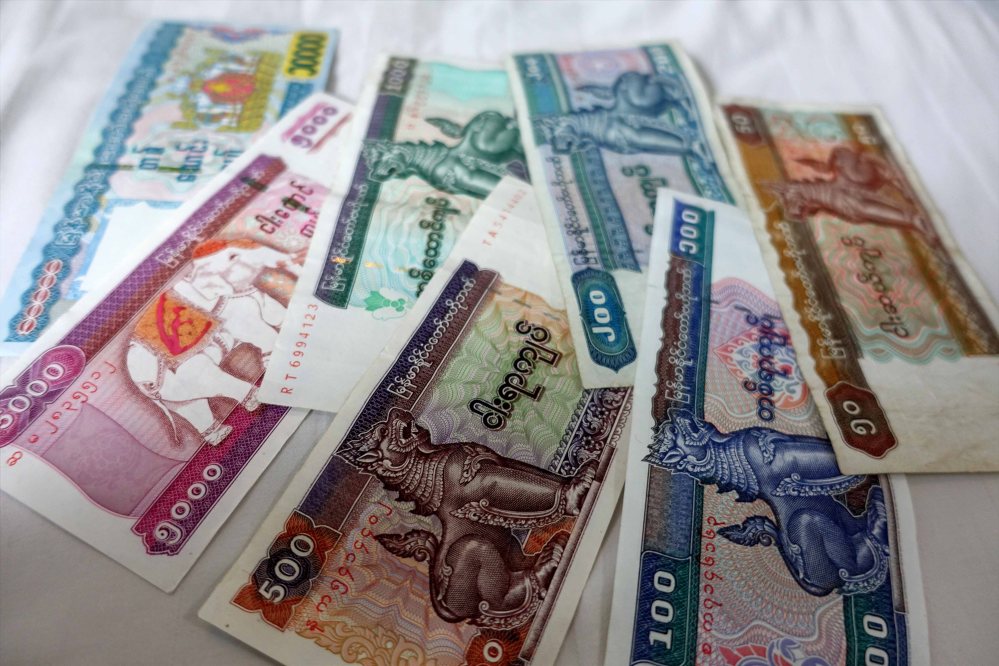 Bonus Trivia of The Day: Take a look at this picture for a few minutes and let’s see if you can notice something odd. Scroll down to see what I’m talking about.

Did you notice the side of the drivers wheel and the side of the road don’t match? If yes you are very observant. Myanmar was a British colony until 1948. The cars had right hand steering and drove on the left side of the road. In 1970 all traffic was moved to the right. Apparently, the General at that time had a dream that the country should switch directions and traffic was directed to move sides overnight. Despite the lane shifts, virtually every vehicle in Myanmar has right hand steering. Many vehicles are very old, and those that are considered modern are second hand imports from Japan.