If there is something I universally hate, that would be the taxi drivers; the Bangkok taxis take my hate to a whole different level. Here it’s pretty much impossible for a tourist to get a taxi driver to activate the meter and get a fair price. They just won’t do it, they just give you a super inflated fixed tourist price and you cannot do anything about it besides bargain a few baht less. You need to consider wasting 30 min every time you go to a place just to take a taxi that will not rip you off (as much). So you must be questioning why is this?? Well, the answer is very simple, Thailand has become so stupidly touristy that if you don’t want to pay their rip-off price, some other white guy from Europe will pay it 3 min later. Tourists are walking dollar signs to the locals here and they don’t even have to make an effort on screwing you anymore.  But anyways…

We attempted to take a taxi to the Grand Palace and all the taxis were rude to us and said no they cannot take us.  So we then returned to the hotel and they said to take a boat and he explained they will try and charge 100 Baht but it is 40 Baht. We attempted to go on the boat that the locals use which was spacious with many seats (and we assume the 40 Baht price) but we were stopped  and they told us we had to go back and pay and it was 100 Baht and we waited for a much smaller long boat where they packed in all the tourists for a very bumpy ride.

We first visited the reclining Buddha and it is truly incredible. This massive golden Buddha, so long and beautiful, probably the best Buddha so far on the trip. But what wasn’t incredible were the incredibly rude hordes of tourists (looking at you China) smashing us as we tried to view this beautiful sight. 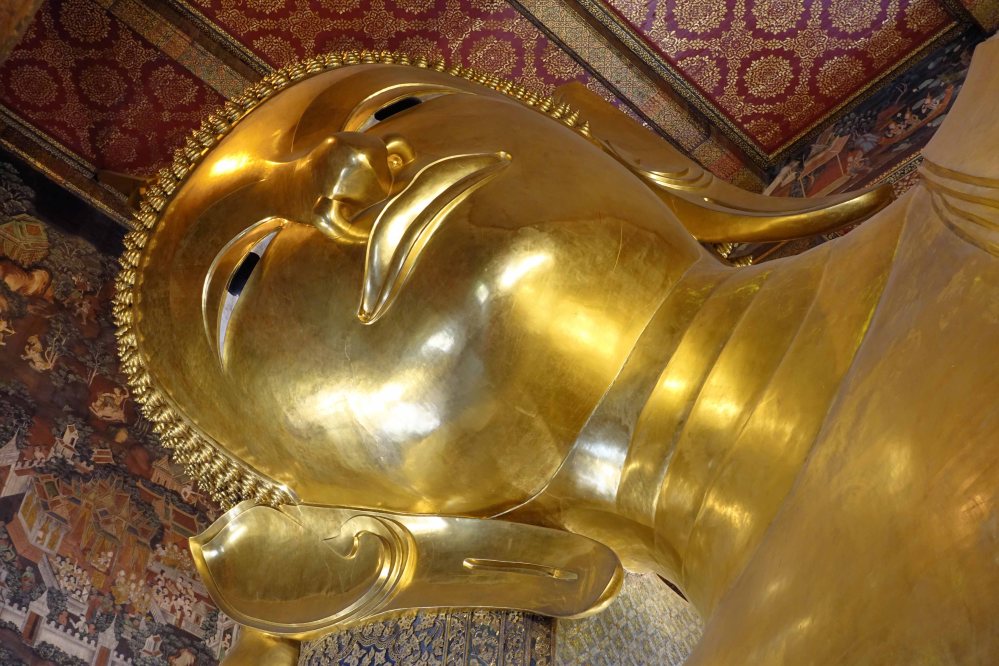 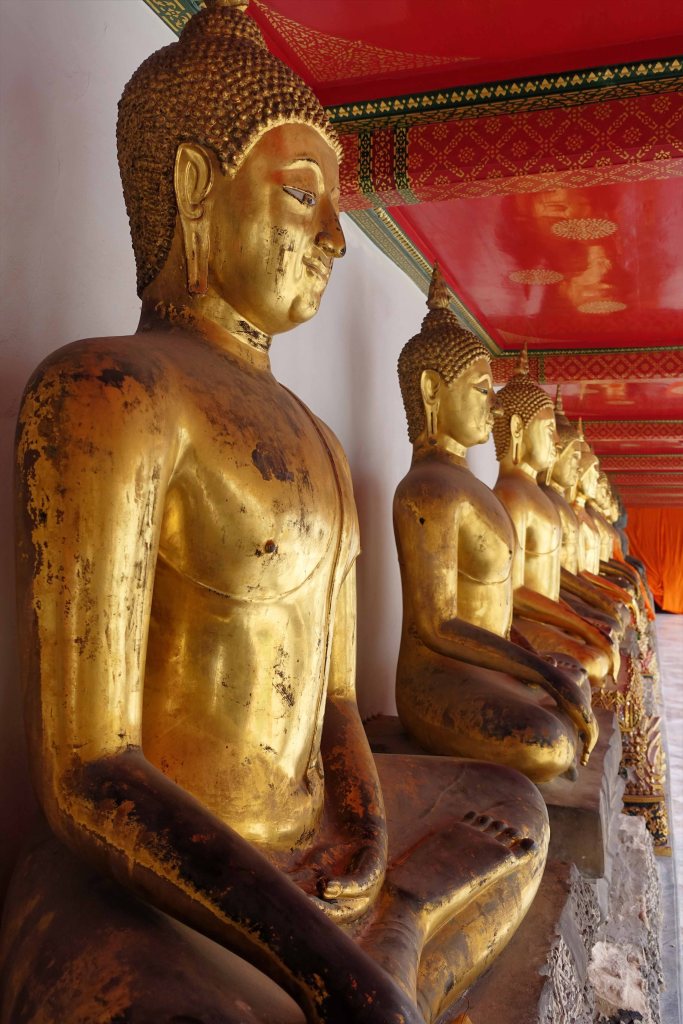 But then we went to the Grand Palace which made the reclining Buddha kind of empty. There was probably a billion (I’m not exaggerating btw) Chinese tourist in group tours filling up the entire palace area. You didn’t really need to know where to go, the rivers of people would take you with them and push you though the palace. Taking a picture without anyone in it was as rare as solar eclipse and you really needed to shout at people to move the f&*$c away so you can take a picture (no need to speak mandarin, they understand by the tone). Perfect place to test your tolerance and patience towards crowds. Again the palace is stunning and something you should see if in Bangkok but the chaos and business truly took away from being able to appreciate where we were. 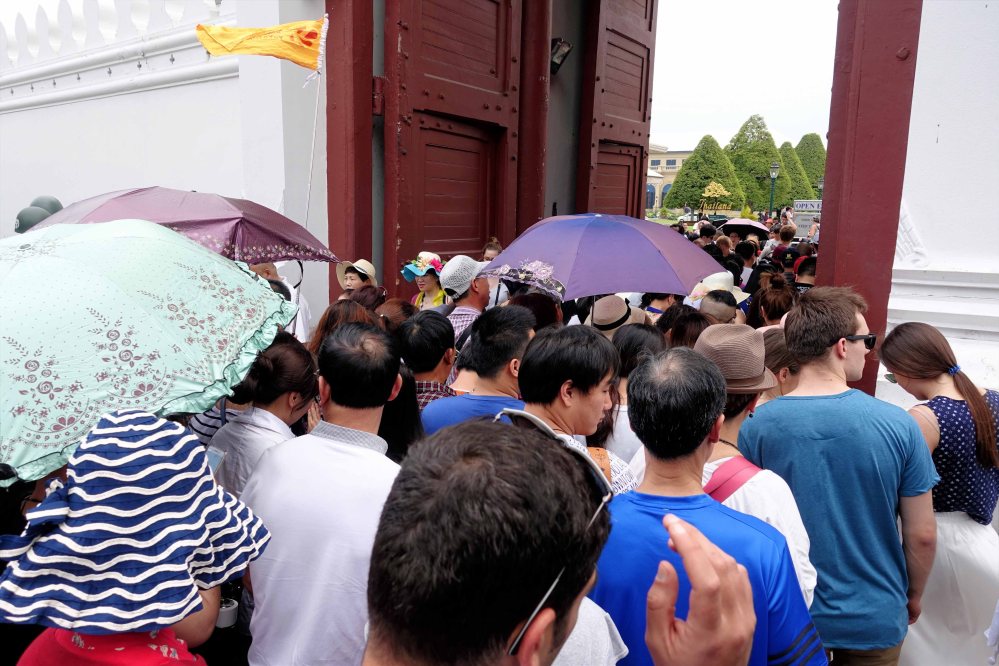 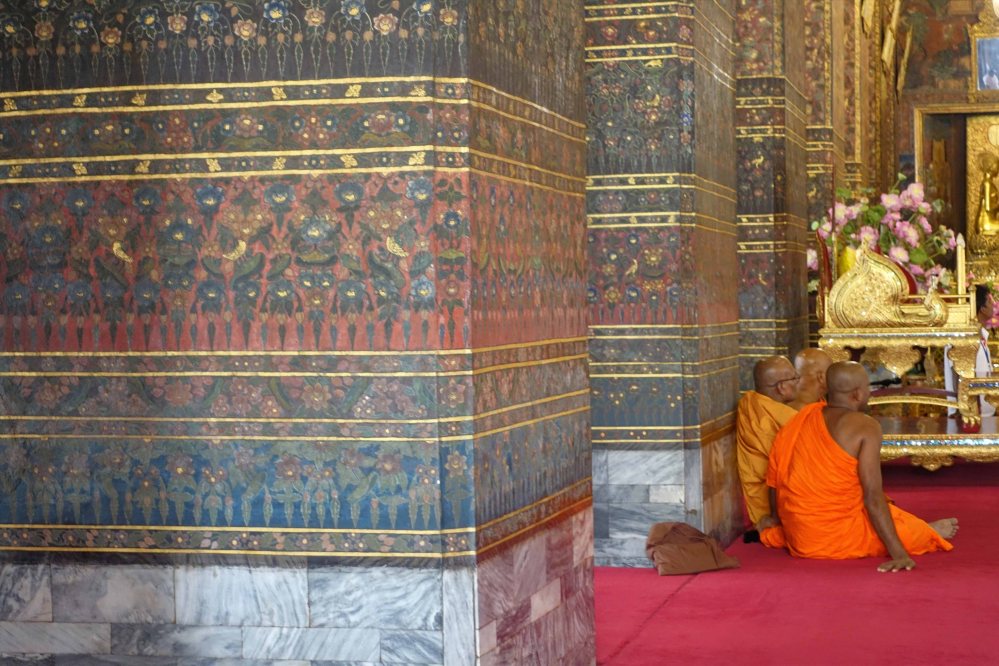 The palace has been the official residence of the Kings of Siam (and later Thailand) since 1782. The king, his court and his royal government were based on the grounds of the palace until 1925.

Construction of the palace began on May 6, 1782, at the order of King Buddha Yodfa Chulaloke (Rama I), the founder of the Chakri Dynasty, when he moved the capital city from Thonburi to Bangkok.

Even this Ramayana Monkey demon is sad to see all the crowds.

A soldier of the Royal Guards stands at the entrance of the Phra Thinang Chakri Maha Prasat.

When we were leaving we saw a monk school daytrip trying to enjoy the palace as well.

We visited the emerald Buddha (Wat Phra Kaew), is regarded as the most sacred Buddhisttemple (wat) in Thailand. The Emerald Buddha housed in the temple is a potent religio-political symbol and the palladium (protective image) of Thai society.

The Emerald Buddha, a dark green statue, is in a standing form, about 66 centimetres (26 in) tall, carved from a single jade stone (“emerald” in Thai means deep green colour and not the specific stone). It is carved in the meditating posture in the style of the Lanna school of the northern Thailand. Except for the Thai King and, in his stead, the Crown Prince, no other persons are allowed to touch the statue. The King changes the cloak around the statue three times a year, corresponding to the summer, winter, and rainy seasons, an important ritual performed to usher good fortune to the country during each season

the weapons room, and other temples. We couldn’t take it anymore and walked towards the exit but not before doing a Where the Hell is Noodle Ft. Sarah dance where this guy came up to us saying how awesome he thought it was. Turns out he was from Mexico City and a really nice guy, first Mexican besides Eitan that we have met on this trip and he was with a really nice couple from Germany.  We bonded with them about how unpleasant the Grand Palace experience was and decided to all make our way out and have some lunch and beer!  On the way to lunch we stopped at the park where locals were playing a really cool ball game where they needed to score by placing the ball inside the baskets but only using their feet or head. 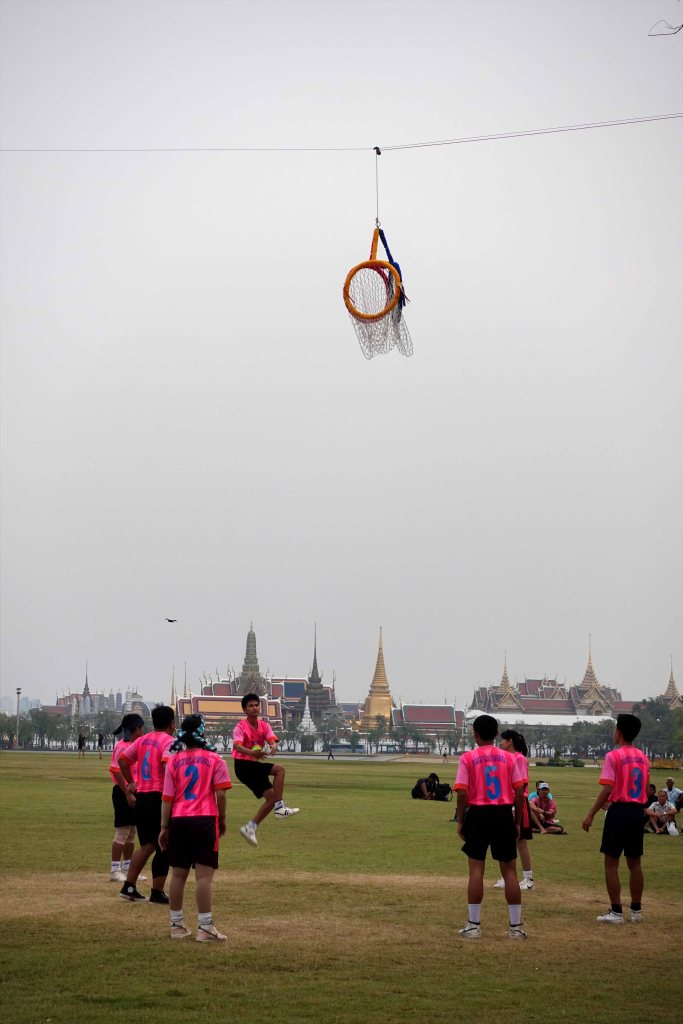 We went to what is known as the famous backpackers street of Bangkok, Kao San Road.  It is sleazy but neat to see. The street is full of tattoo parlors, massages, fake ID stands (do you want to be Lufthansa airlines pilot? What about a Harvard business school graduate? This is the place to make your dreams come true at 1% the cost and 100% the risk of jail time). We ate lunch at a place Eitan remembers eating at 5 years ago and enjoyed chatting with our new friends. 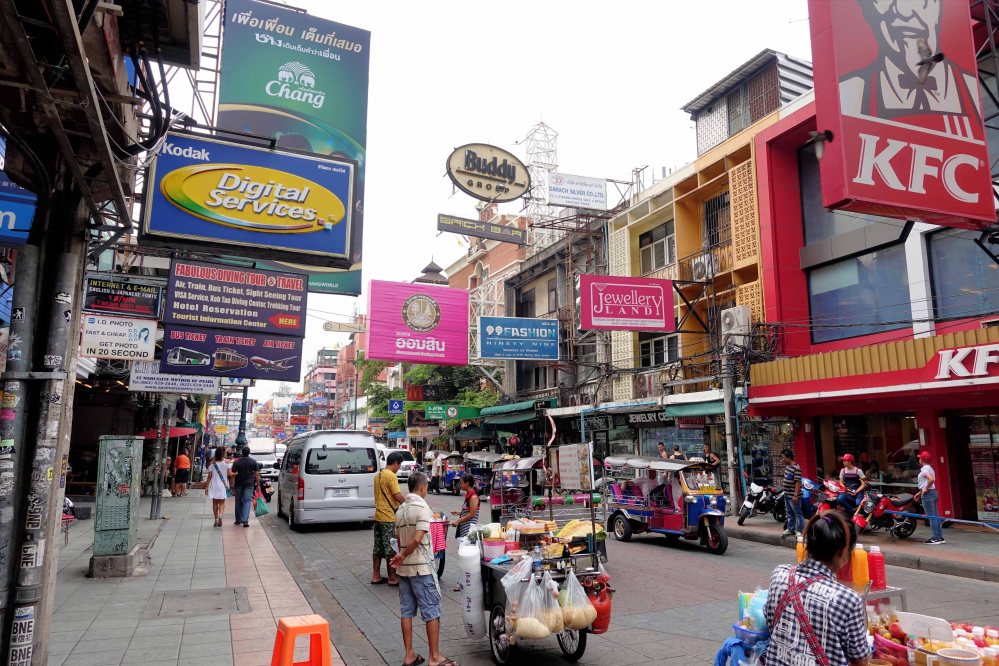 Having lunch with our friends Ana from Spain, Peter from Germany and Luis from Mexico! 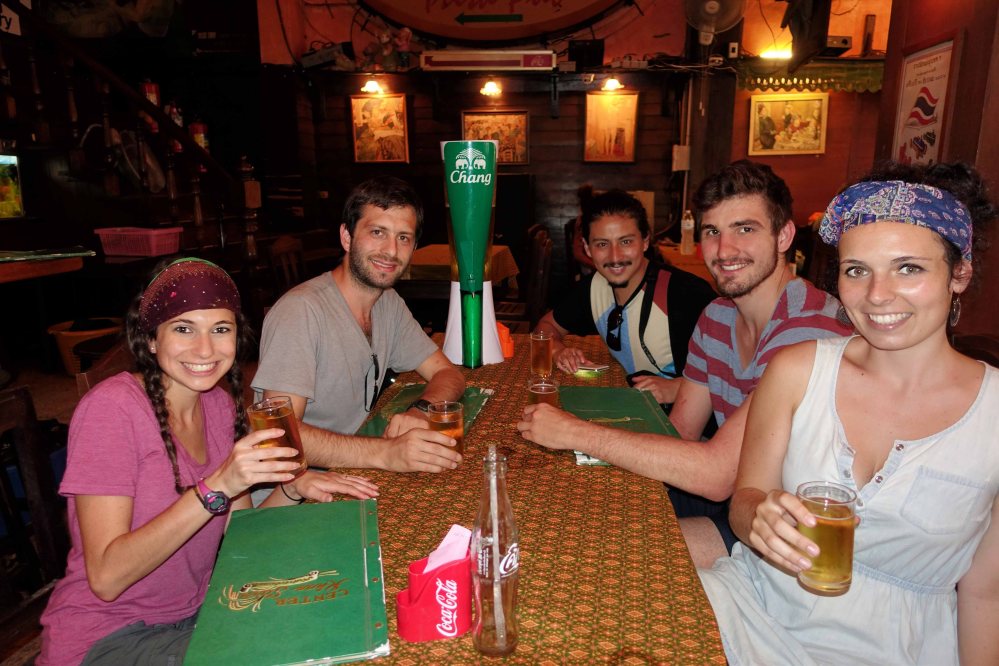 One of Sarah’s good friends Alexa has a friend who happens to be in Bangkok right now as well, Natasha.  Sarah and Natasha have been chatting about their travels and decided to meet up. Natasha was traveling with a friend of hers who found out that Bangkok has many speakeasy bars and she found a very upscale place for everyone to meet. We took a Tuk-Tuk to this rooftop bar and it was a really cool spot.

This was our fanciest experience as backpackers by far this trip.  We enjoyed the amazing downtown Bangkok view and our pricey cocktails and compared notes and experiences with these fellow travelers.  Sarah will see Natasha again as they are both bridesmaids in Alexa’s wedding in September, small world!

We took the BTS (Skytrain) back and its amazing, so efficient, clean and cheap! take that stupid taxis! 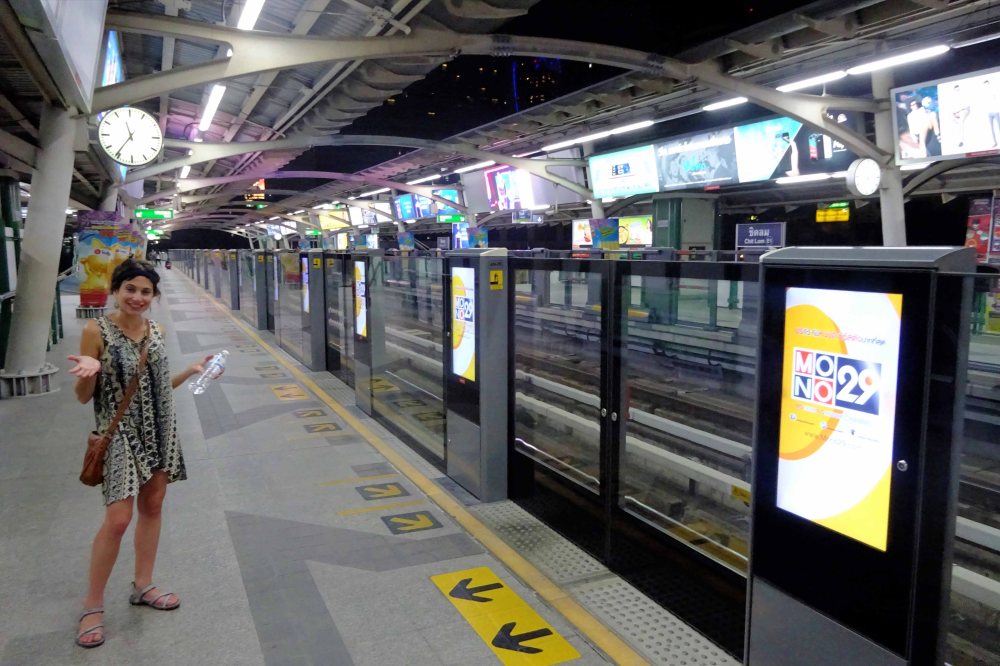 After today, we can only validate what we have seen the past 10 days. Thailand has been taken over by tourism and lost its charm. Booooooo!

Bonus pic of the day:  Hungry? In Kao San Road you can get exotic fried scorpions that apparently taste like chicken.