When you travel long term you quickly learn that not all places you visit will be amazing, breathtaking or interesting. Surabaya was our first not awesome city of this trip. Surabaya has nothing to offer (we still managed to find some good sights), the traffic is the worst we’ve seen in our lives (we may have to stop complaining about LA traffic) and the city itself looks like a landfill.

We stayed at this hotel where everything is colorful and the staff dance badly choreographed Pitbull songs at 8:00 am during breakfast and the shower looks like an airplane lavatory.

Our first stop was the House of Sampoerna, a famous Indonesian cigarettes factory and previous residence of the Sampoerna family. This free nice museum explains how the whole cigarette making process from tobacco farming to production.

On the first floor they have a sweat shop where you can see the workers (only woman wearing all matching outfits who move like robots) hand rolling cigarettes. The fastest of the workers can roll around 4000 cigarettes a day. They don’t allow you to take pictures, maybe because they are afraid we will denounce them to the World Human Rights Organization; of course Eitan managed to get a couple photos.

This museum offers a free heritage bus tour that takes you to different historical sights around the city. We were on the waiting list (apparently is a very popular tour) but fortunately a couple didn’t show up (lucky them) so we got a spot. 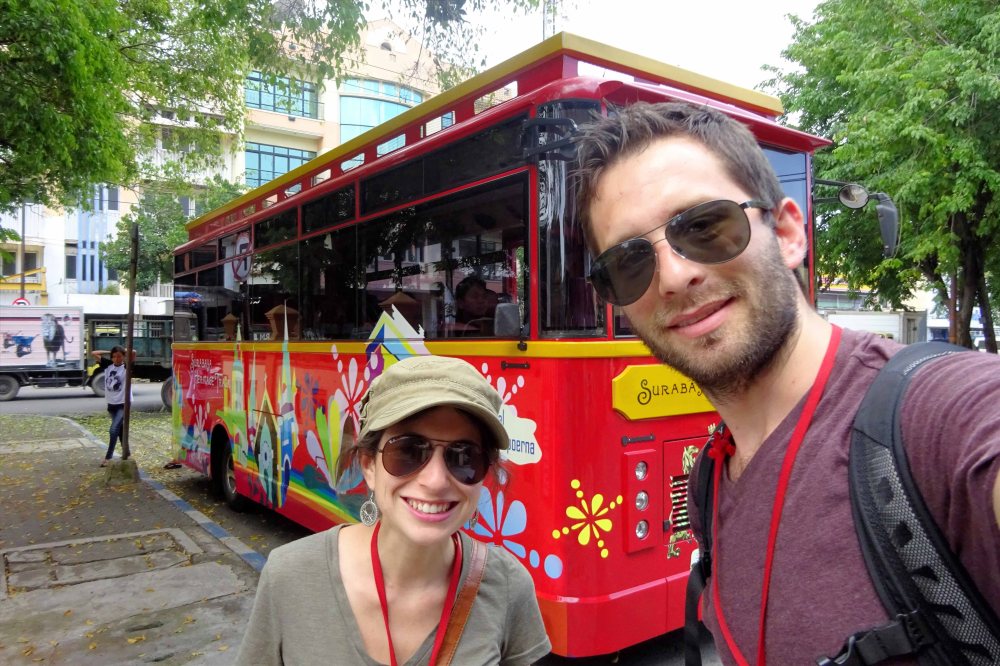 The first stop was the Heroes Monument, no idea what happened in here as our guide’s English sounded more like Indonesian and there were no descriptions on site. 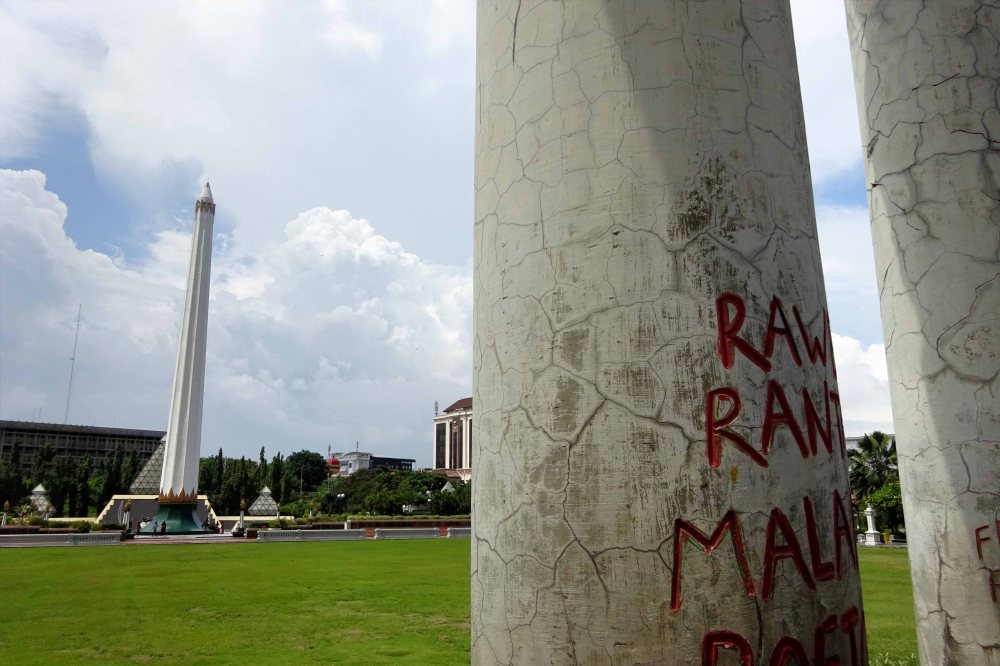 We continued to our second stop, the tomb of Surabayas national hero, Dr. Someone. He helped modernize Surabaya and created some other uninteresting projects. By this time we realized we rather be watching a movie, but we didn’t betray our tour guide this time and continued the boredom. 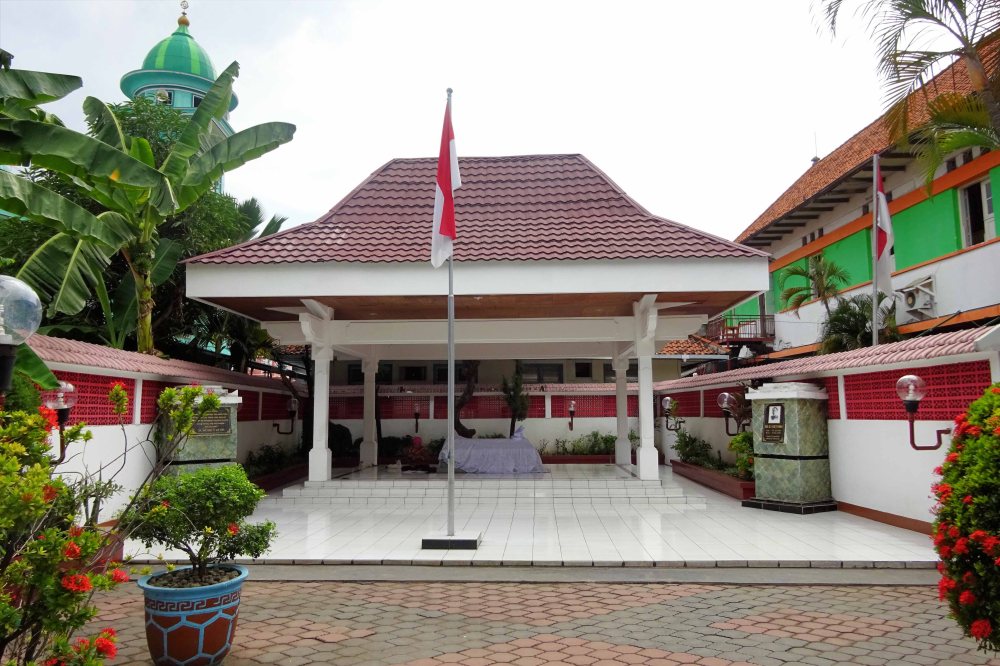 The third stop was the Dutch Plantation building, again no idea what happened here but the only thing we understood is that the building has an anti-earthquake system. Very (not) interesting.

We drove by an Indonesian prison where it’s so overpopulated that they have 30 inmates inside a 1 person cell, so everyone needs to stand up. 5 year sentence = 5 years standing up.

We walked in this filthy city towards the China Town, it had less Chinese than some Tacos al pastor. We almost were ran over a few times as the sidewalks were filled with cars making it impossible to walk on them. We decided to take one of those bicycle tuk-tuks to take us to the Arab quarter.

The most important mosque, Masjid Ampel is located inside this area. We walked through the nice market which included date shops, perfumes and traditional Arab clothing.

The alleys were actually really nice and you feel that you have been transported to Saudi Arabia or somewhere around there. 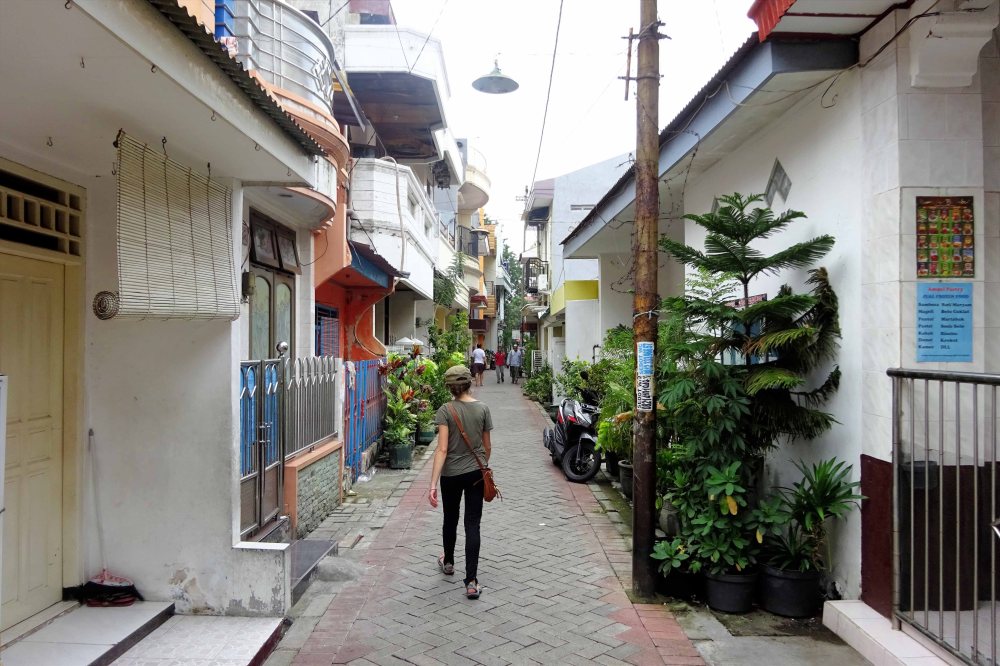 This cute little girl was very excited to practice her English and giggled as she asked us our names.  Everyone seemed intrigued by us (being the only white people) and asked where we were from.

We went to another mall to eat dinner, this one was less of a mall and more of an indoor place filled with trendy restaurants. We found this busy restaurant inside that was actually pretty good (and it gave Eitan explosive diarrhea as well), it was happy hour so all the food was 50% off so maybe we over did it a bit. On our way back we did around a 1 hour to drive for 4 miles, that’s how bad this city is.

Anyways, we are sooo happy to leave Surabaya. Our next stop is Yogyakarta, the cultural capital of Java where the temples or Borobudur and Prananban are located.