Despite being exhausted from our early morning to North Korea we also wanted to continue to explore Seoul.  We went to this artsy area called Itaweon with many craft stores and souvenir shops, it was incredibly nice. 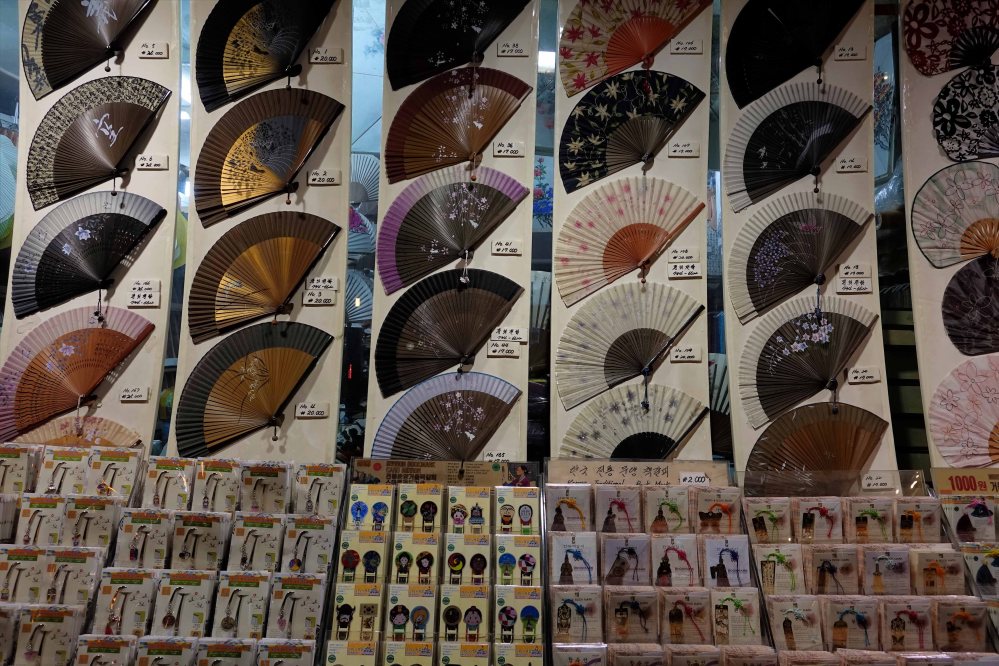 Itaewon is also known for traditional tea houses. We went to one, originally because we just wanted to see it, but couldn’t resist drinking some tea despite costing around $7 per cup. We tried two of their most popular handmade teas, Jujube (Korean dates) and Omija (Five-flavor berry) which were truly incredible and tasted way better than any tea we have ever tried in our lives. We got it with these traditional Korean chewy rice sweets that were also wonderful. 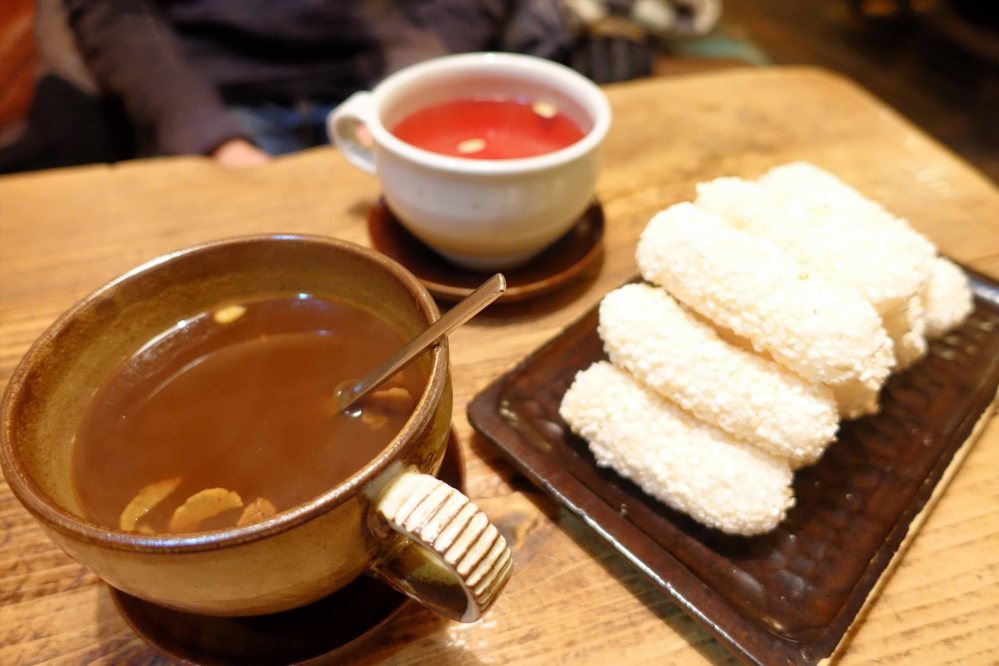 Walking along the street this street vendor was making another traditional Korean sweet, no idea the name but it was some kind of honey candy that he maneuvers to create 32,000 strings by doubling it and stretching it, the candy is filled with almond pieces. He demonstrated how to make them so then of course we felt we had to buy some, we didn’t want to buy a whole box and a nice Korean couple offered to buy the other half (an example of the kindness of the people here).  The sweets were weird yet good.

We continued to explore this beautiful city including walking along Cheonggyecheon creek, this is a beautiful 9 Km long river that runs in the downtown Seoul. This river is in complete contrast to the LA river; it is perfectly maintained with no graffiti, trash, homeless and very safe at 10pm at night. 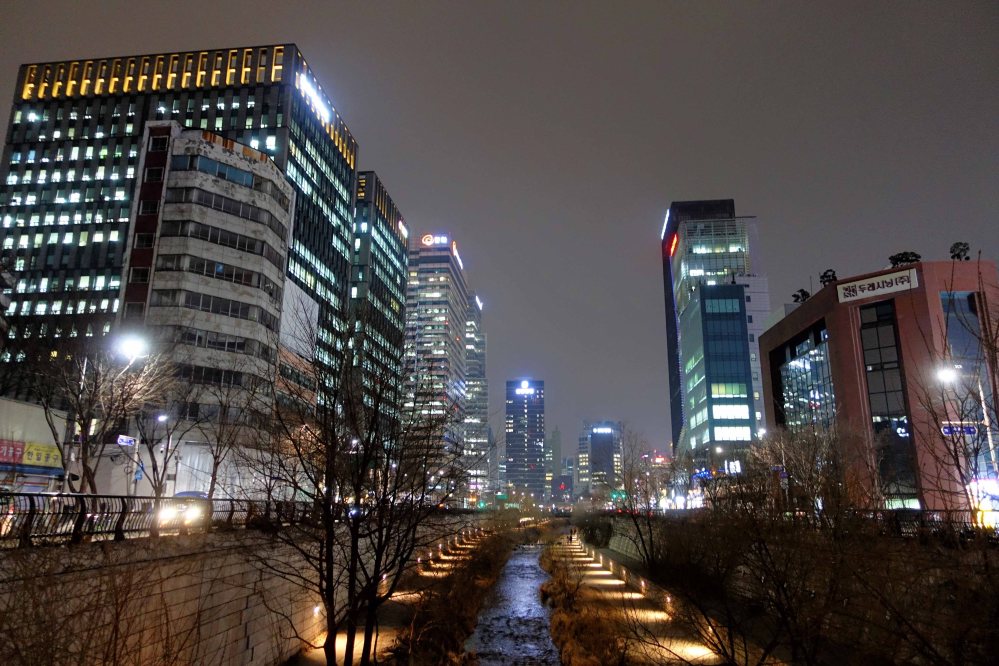 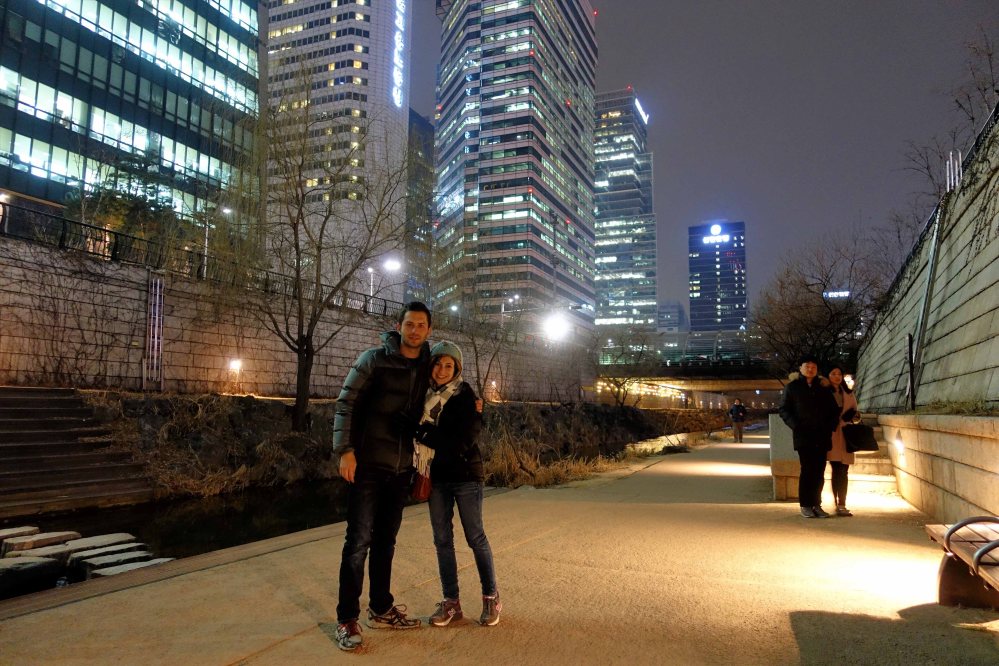 The following morning,  Sarah experienced her first hostel type breakfast of cooking eggs in the common area (we couldn’t resist the free eggs provided in this hostel!).  We then went to the main palace in Seoul, Gyeongbokgung Palace, which was the main royal palace of the Joseon dynasty built in 1395. Some Korean girls like to rent traditional dresses for the day and they go take photos at the national monuments just for fun (at least that is what we understood trying to ask them if they are celebrating something). 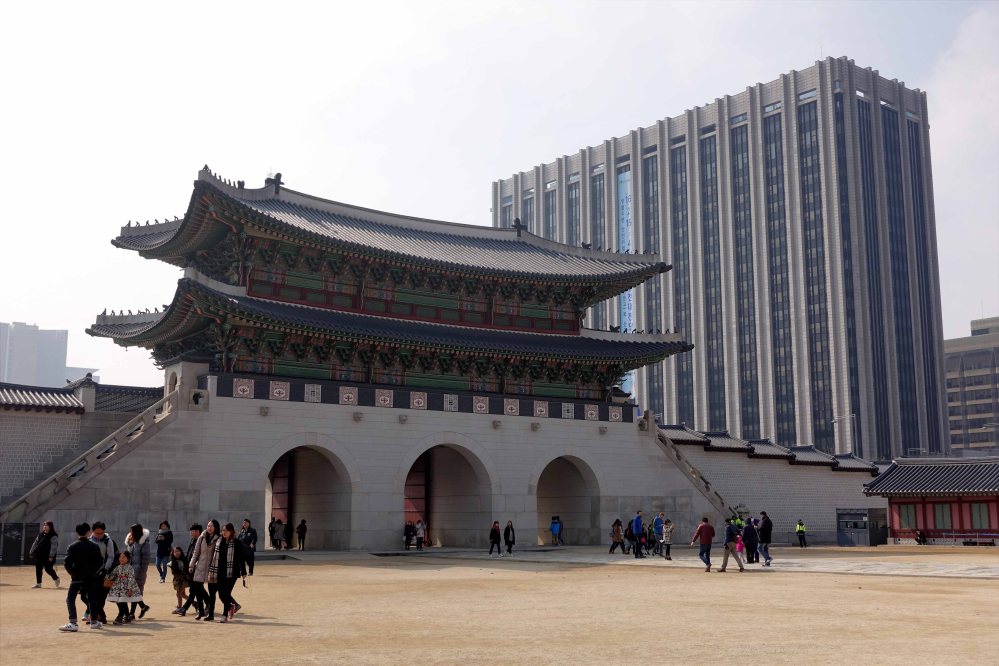 North of this beautiful palace is the the Korean Folk Museum where you can see a nice pagoda on top. 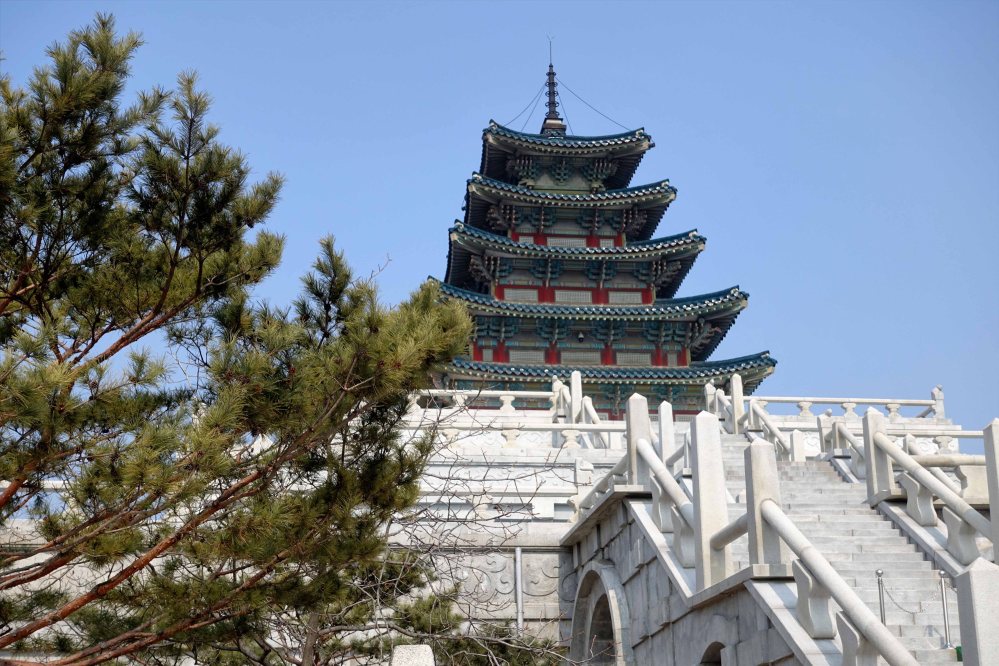 We explored Seoul’s Bukshon Hanok Village that is located between the two main palaces. It still has hundreds of traditional Korean homes and a lot of craft shops, from kites to ceramics. The contrast between old and new is breathtaking. 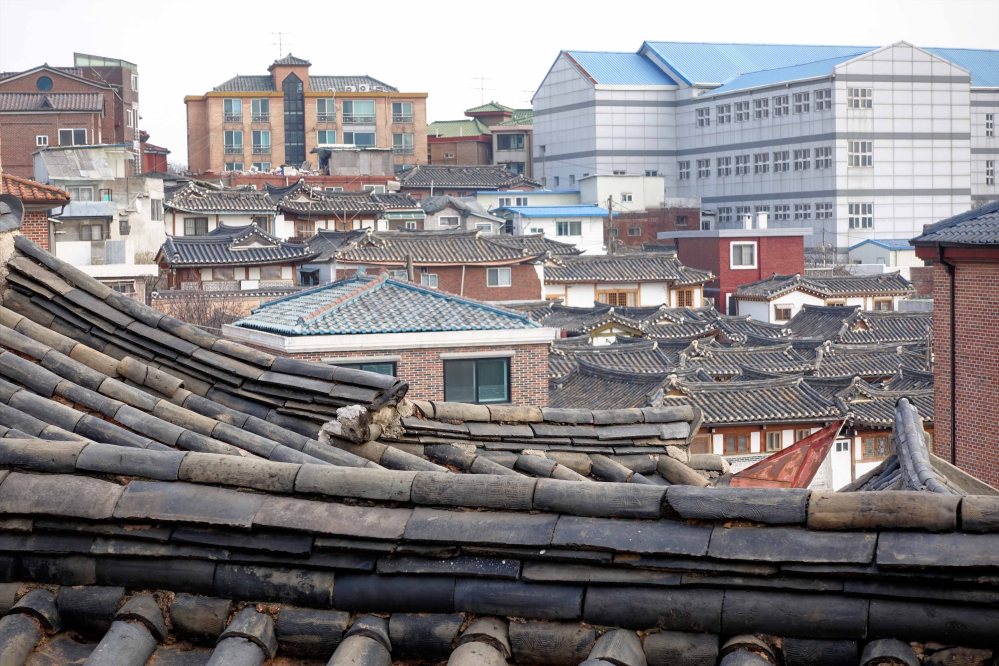 On the way to the market we walked  by the statue of King Sejong, the most important figure in Korean history, he is the one on the money. 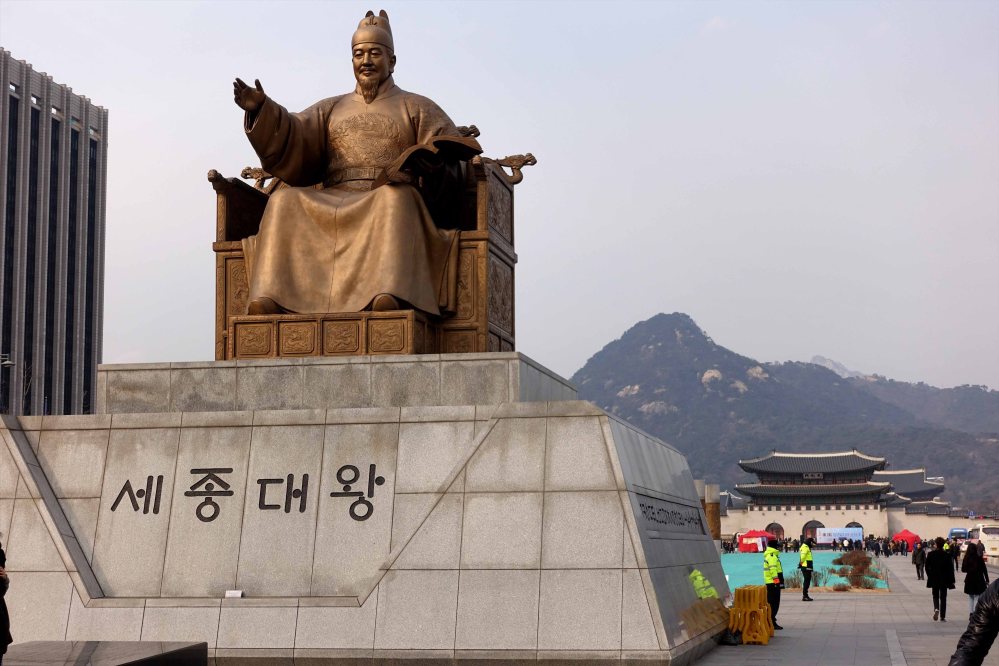 We walked several miles to the Dongdaemun Market that was packed and their specialty was the Bindae Duk, this skillet fried mung bean pancake thing so of course we had to try it.  Let’s just say it’s basically a Korean latkah. 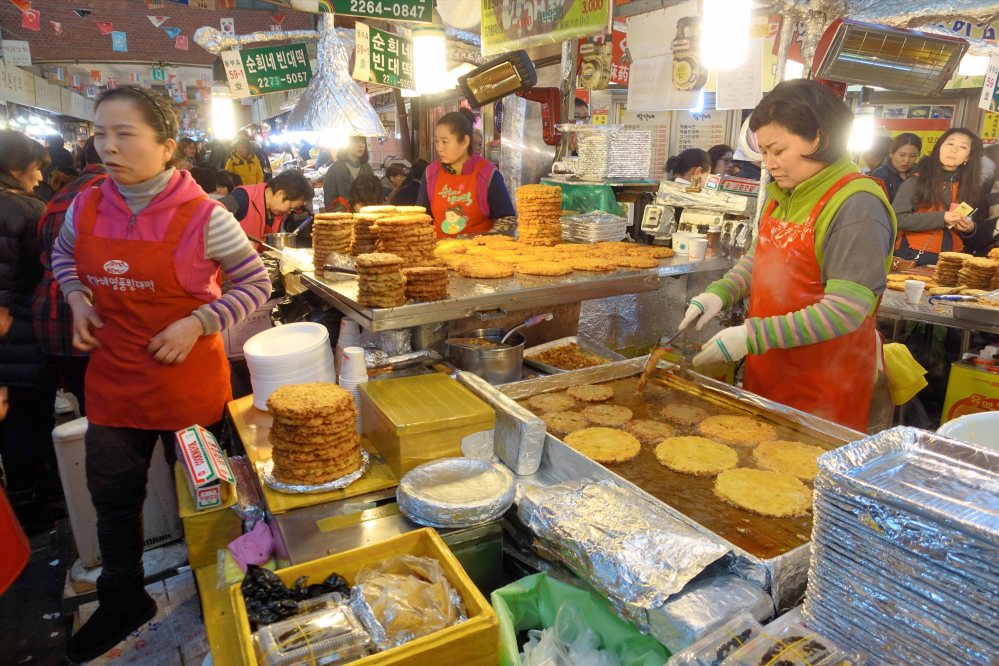 That night we met up with the two guys we met on the DMZ tour (Tyler and Jacob) and had an extremely fun night.  We went to the area Hongdae which is home to one the biggest artsy Universities, it was packed!! There were students dancing hip hop and K-pop in the streets for money to pay for their Art education after disappointing their Asian parents for not choosing Medical or Engineering School.

We went for some Korean BBQ, being used to the all you can eat BBQ in California, this definitely left us hungry; good thing we filled our stomachs with Soju and beer instead to truly embrace the college lifestyle.

We wandered the street asking for a bar serving Makgeolli (a delicious carbonated alcoholic rice drink) but no one seemed to understand us.  We ended up at a bar where they gave us a private room where we continued to enjoy even more flavored Soju and beer.

After that we were ready for some Korean style Karoake.  This included another private room where we sang our favorite songs while bizarre music videos that didn’t match the song at all were played. It truly was a blast.  After waiting for the last grilled cheese sandwich at a street vendor for Jacob, our last stop was randomly a hookah bar.  We imagined Karoake and Soju but never would we have guessed a hookah bar in Korea.

We succeeded in embracing our college days by staying out til 3am and Eitan having a huge hangover the next day.  The sad part was saying goodbye to our new friends who we are unsure if we will ever get to see again, but hope to stay in touch!

Bonus Pic: Mangoes in Korea are called “Infinite Fruit” and cost around $3.50 dollars each.