Many people warned us that we should not visit Bogota, but we still wanted to give it a chance and see for ourselves.

We arrived at night and went straight to the famous restaurant Andres Carne De Res, this craziness of restaurant inspired by Dante Alighieri’s Divine Comedy, where each floor is uniquely decored from hell to heaven.  The decoration is incredible!! 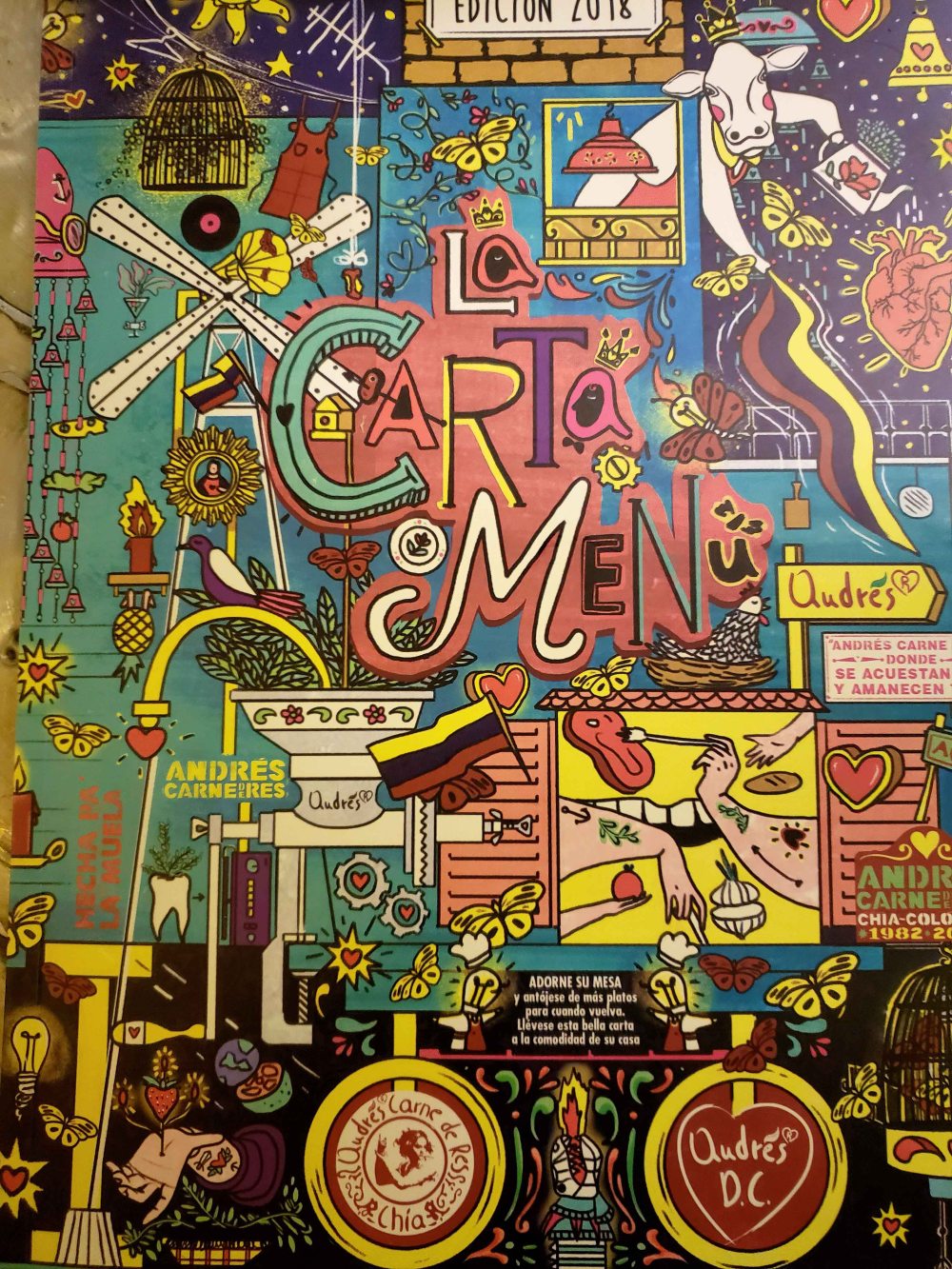 We had to make a reservation to get in a few days in advance. After we paid the cover charge and were moved around by a million different managers we finally got seated. Ordering here was not an easy task, the menu is 76 pages long and it specializes in steaks and ceviche (for real, not exaggerating here).

The food took probably 2.5 hours to arrive, the service was terrible and the food even worse. If you come to Bogota, definitely you should check this place out, but just for drinks and dancing! do not eat dinner here!!

That morning Jenna Maria and Erin went back home and we stayed one more full day to explore. We had a nice breakfast at the hotel before we started sightseeing in this city. 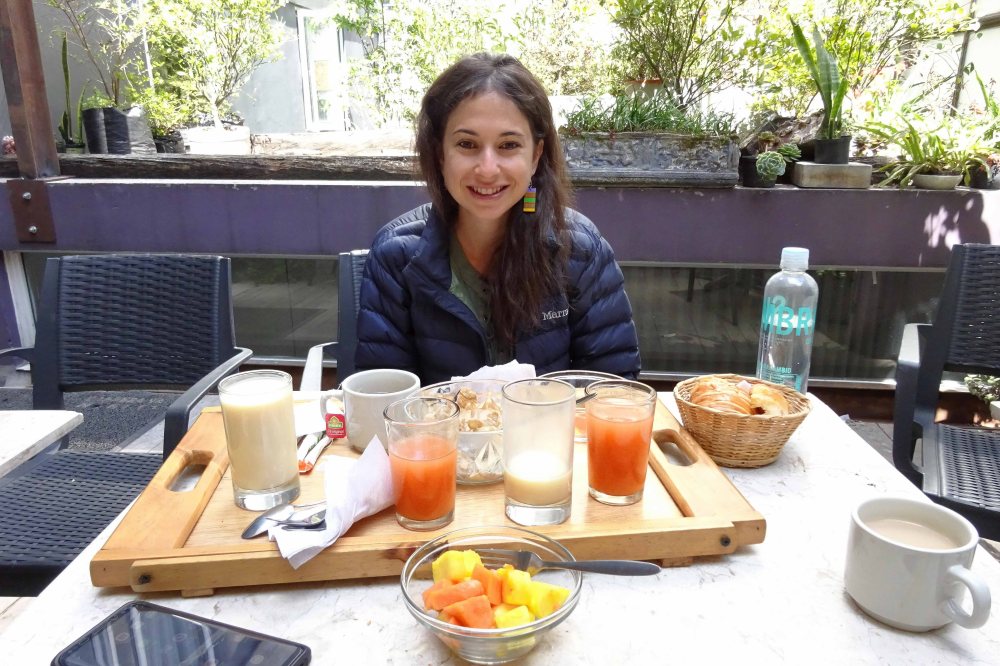 Our first stop was the Monserrate hill.  We needed to get the funicular to get to the top of the hill, 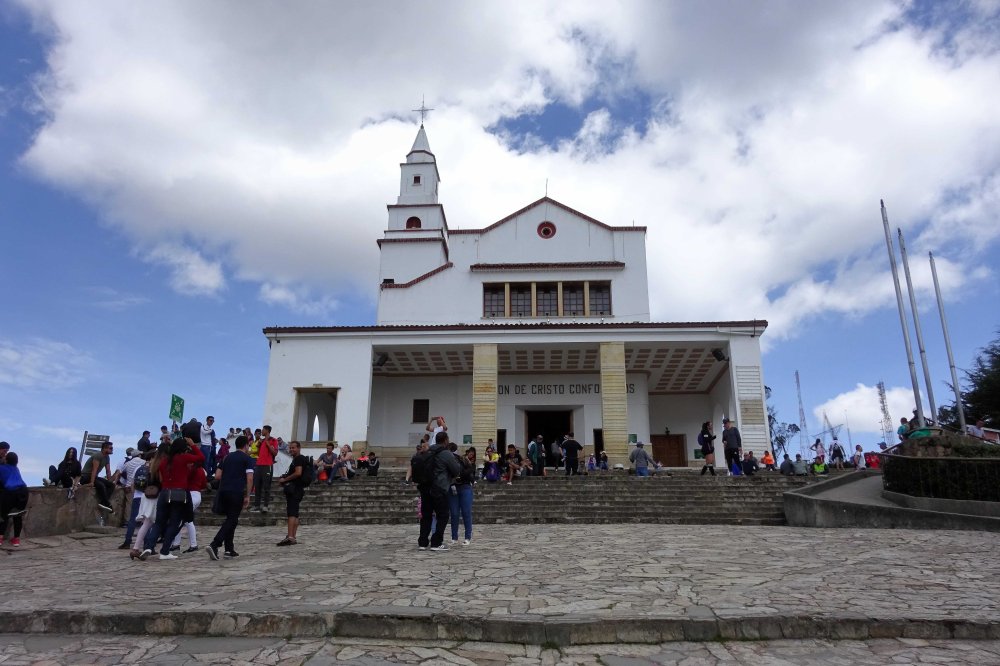 The view of this city from up here was spectacular.

Mr. Juan de Borja former governor of Colombia gave in 1640 the order to build a church on the mountain. The church was built in honor of Montserrat’s Virgin Morena whose shrine was located in Barcelona. In 1657, there is also a monastery completed. In the monastery, there is the painting of “The fallen lord”. It is the work of local artists Pedro de Lugo and Albarracín. Since that day of the opening thousands of people went to Montserrat.

The hill, already considered sacred in pre-Colombian times when the area was inhabited by the indigenous Muisca, is a pilgrim destination, as well as a major tourist attraction. In addition to the church, the summit contains restaurants, cafeteria, souvenir shops and many smaller tourist facilities.

After we spent a couple hours walking around we were ready to go back to the city.

We took the tramway down and then walked to the downtown area, also called “La Candelaria”

Walking in Bogota is supposed to be dangerous, so we stayed on the main roads and only went to the touristy areas.

There is so much  beautiful graffiti around the city.  We, unfortunately, didn’t have time to take the graffiti tour that is supposed to be amazing. 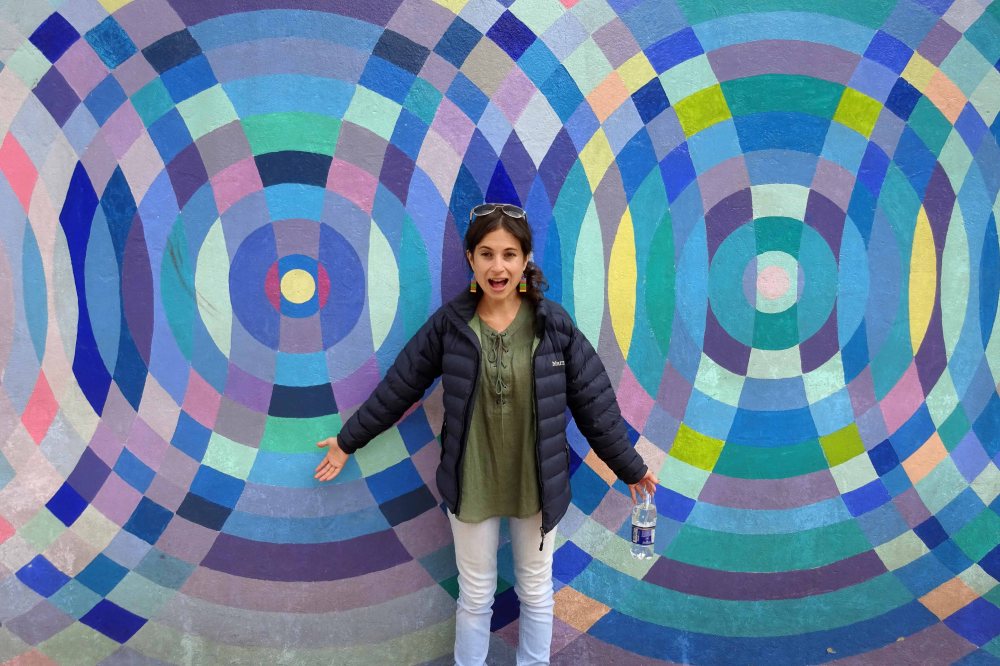 The next stop was the Gold Museum,  it displays a selection of pre-Columbian gold and other metal alloys, such as Tumbaga, and contains the largest collection of gold artifacts in the world .

This museum was seriously breathtaking. There was so much gold here that my mind was thinking of the best strategy to rob it one day (just kidding!!). The museum has a collection of 55,000 pieces!! and 1 mummy.

The interesting fact that we learned at the museum was that the Precolumbian cultures didn’t see gold as a valuable resource but as a religious decorative one. The value came after the Europeans came searching for every piece of gold they could find. 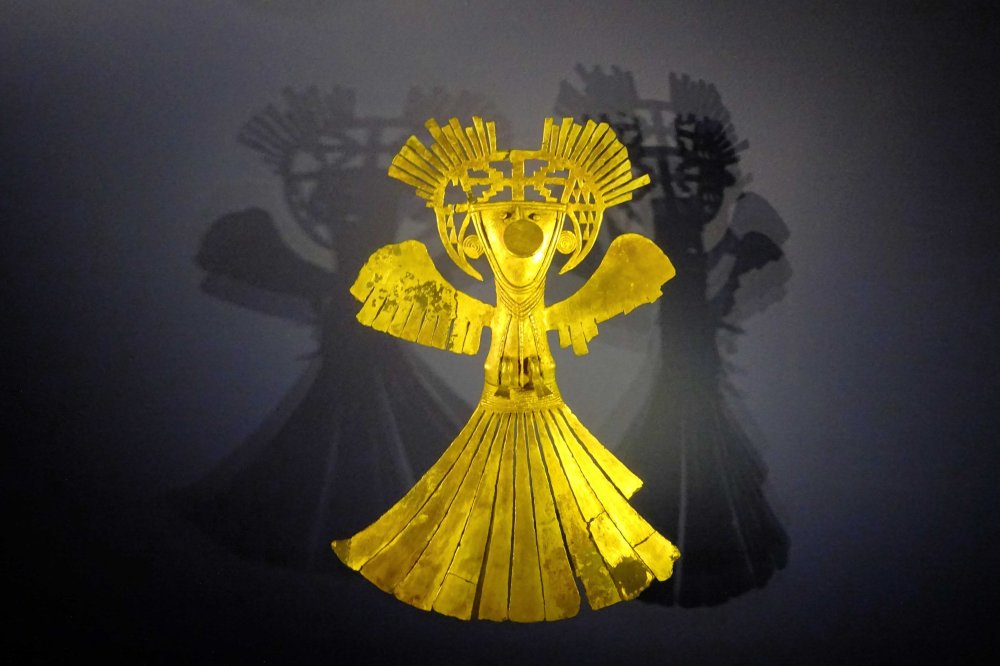 Downtown has these coffee carts ready to give you your  caffeine fix! 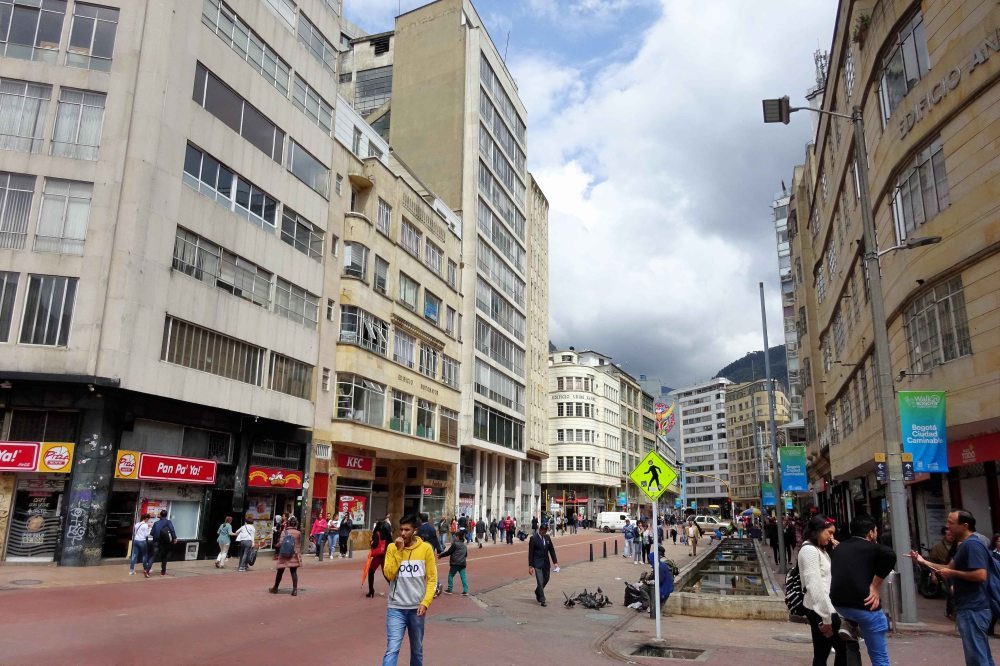 We found a great little place to eat some lunch. We got the famous Ajiaco soup and some drinks. Look at the size of that avocado!

The history of Bolívar Square dates back to the pre-Columbian era, when the site was part of the Muisca Confederation. The first building on the square, a primitive cathedral, was constructed in 1539, a year after the foundation of the Colombian capital. During the Spanish colonial period, Bolívar Square was the stage for circus acts, public markets and bullfights. The square is surrounded by historical buildings; the Palace of Justice is located on the northern edge and the National Capitol borders the square in the south. The Primary Cathedral of Bogotá and the Liévano Palace, seat of the mayor of Bogotá, are situated on the eastern and western side respectively. 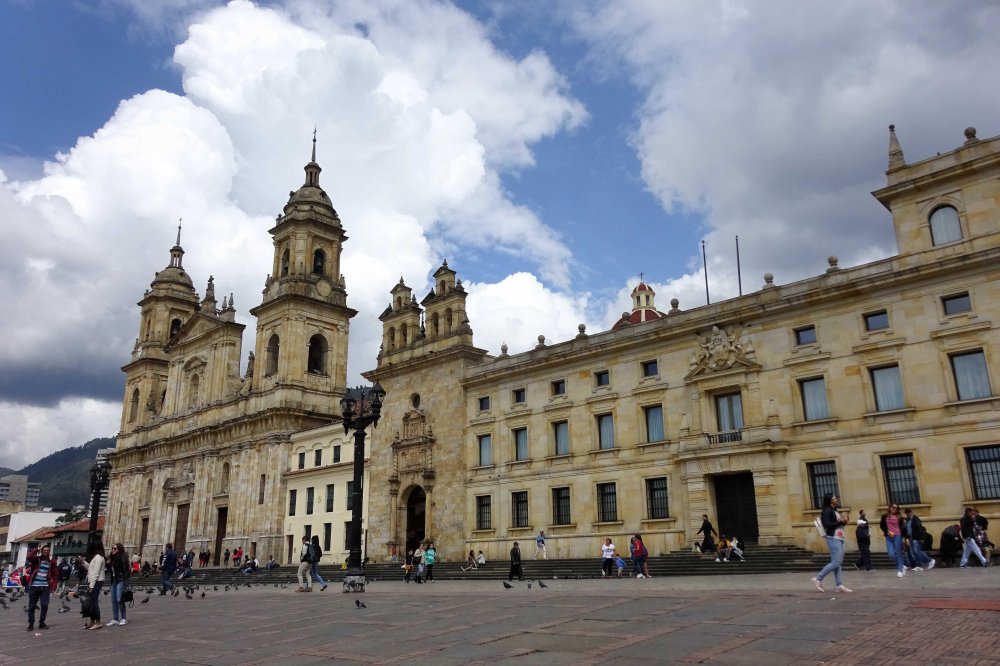 The Cathedral was built four-times in the same place. The first construction took place between 1556-1565 to replace the original thatched chapel, but due to the poor foundation, it later collapsed. The second construction took place around in 1572, yet the earthquake of 1785 reduced it to ruins. The fourth and final construction occurred between 1807 and 1823. It is said to be built by descendants of Jesuit missionaries.

There are other beautiful buildings, but most you cannot go inside.

It is the oldest Colombian school in continuous operation, with a 400-year history since its founding in 1604. 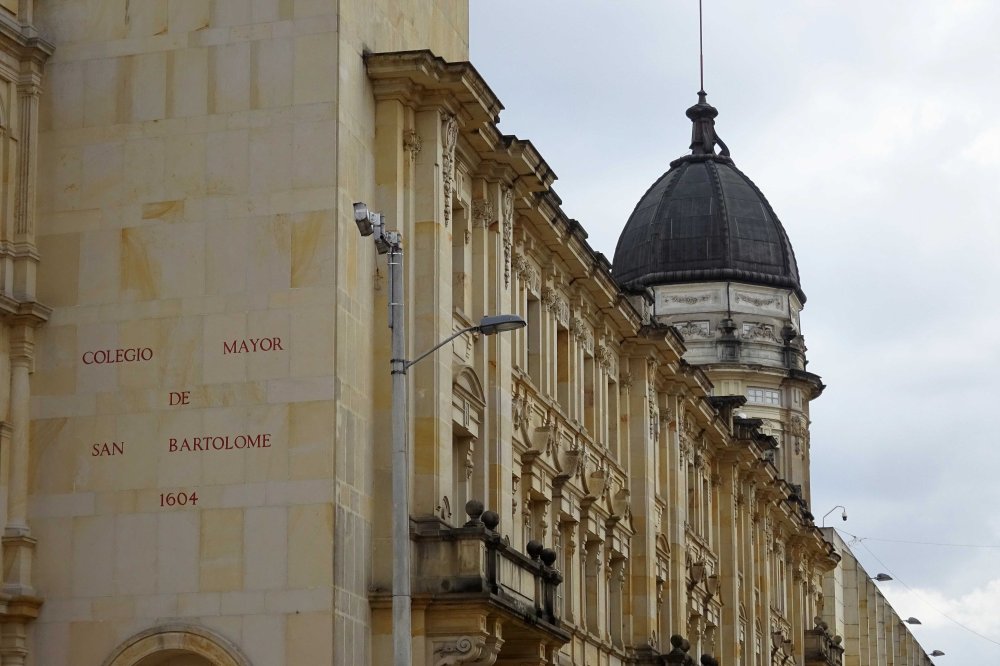 The area is beautiful, it is such a shame that it is a dangerous place to be visiting, according to every single Colombian that we talked to. But let’s not forget that since the mid-’90s Bogotá has made many significant advances, among them reducing its homicide rate from 80 murders per 100,000 residents in 1993 to 15.8 in 2016.

In 2016 the Colombian government and the Fuerzas Armadas Revolucionarias de Colombia (FARC; Revolutionary Armed Forces of Colombia) signed a historic cease-fire deal, so Bogotá potentially sees fewer bombings than it did at the height of Colombia’s armed conflict, but that doesn’t mean the bombings have stopped entirely: an explosion at Centro Comerical Andino killed three people in 2017.

There was some amazing street art.

The National Theatre seen in this photo was built in the Neoclassical style by the Italian architect Pietro Cantini in 1885 and inaugurated on 27 October 1892  on the occasion of the fourth centenary of the discovery of America with a performance of Verdi’s Ernani.

We walked a little longer until we found the Botero Museum. 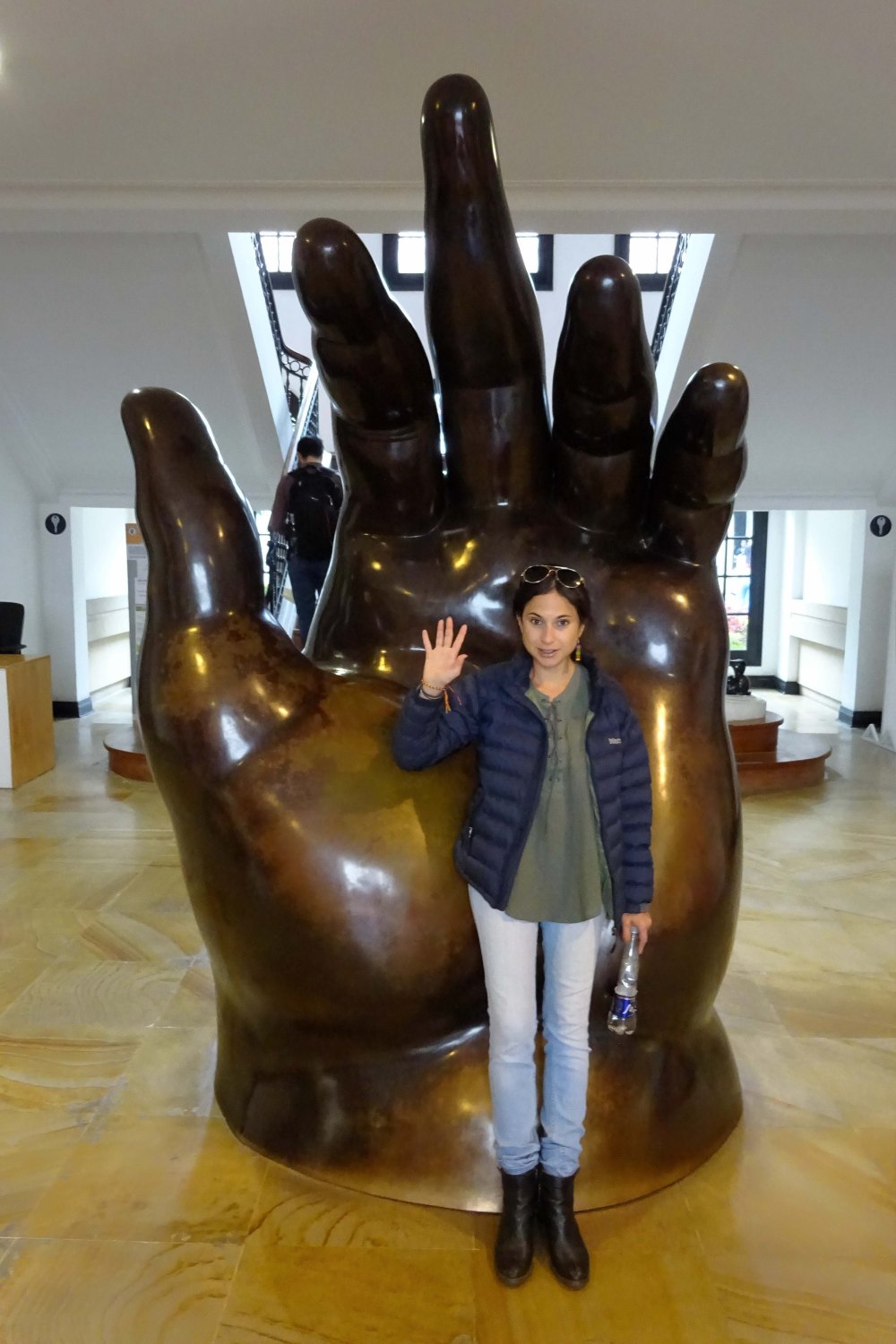 Fernando Botero Angulo (born 19 April 1932) is a Colombian figurative artist and sculptor. Born in Medellín, his signature style, also known as “Boterismo”, depicts people and figures in large, exaggerated volume, which can represent political criticism or humor, depending on the piece. He is considered the most recognized and quoted living artist from Latin America, and his art can be found in highly visible places around the world, such as Park Avenue in New York City and the Champs-Élysées in Paris.

The museum is free, hilarious and definitely worth a visit.

Attached to this building there are other museums, like the coin museum!! a must for Eitan!

They told me to not take photos here, but I am a rebel!! These are old beautiful coin presses.

Banknote collection, one of the dozens of displays.

We walked to a hipster area full of life.

There was live music so we sat down at a coffee shop for a drink. 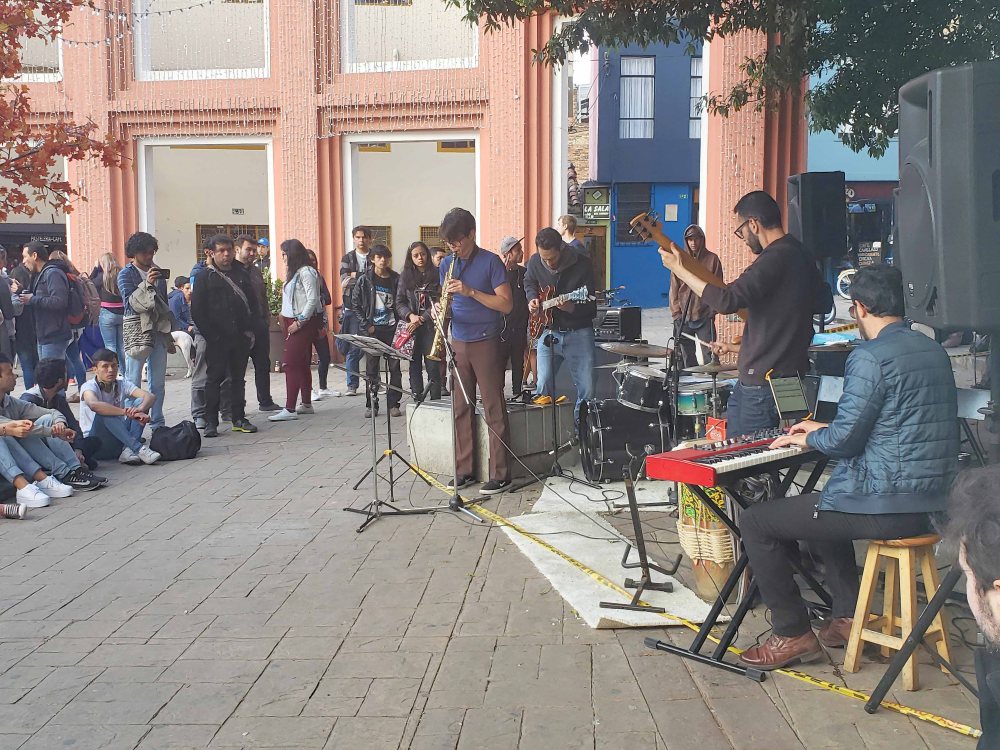 We got a canelazo. It typically consists of aguardiente (sugar cane alcohol), sugar, and agua de canela (water boiled with cinnamon). Soo good! 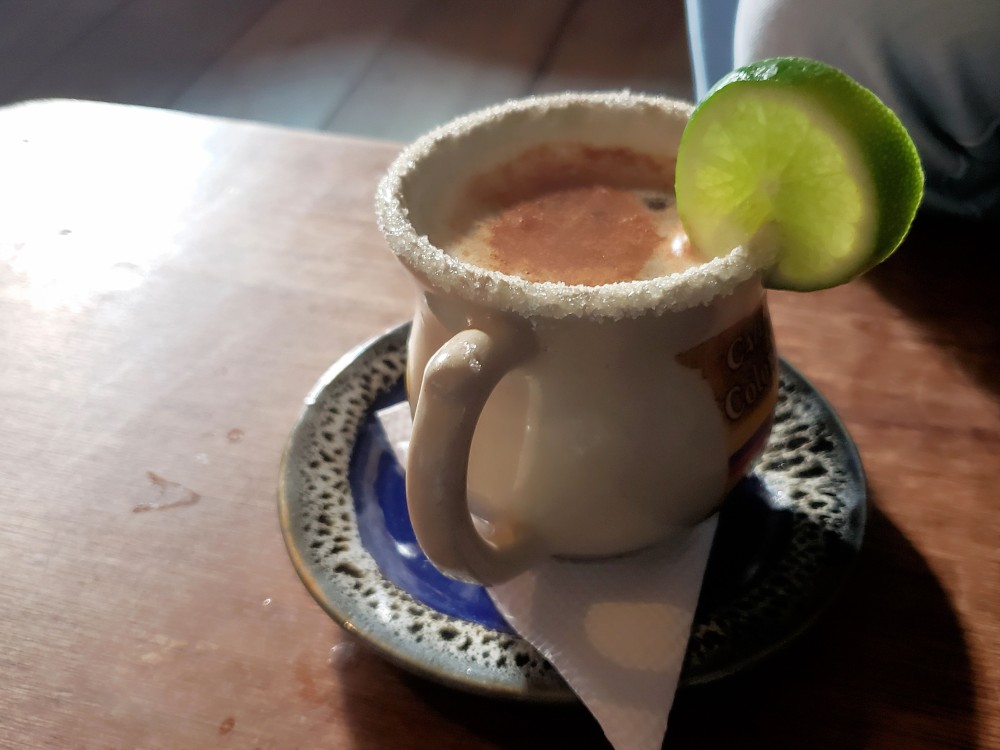 And this was the end of our Bogota sightseeing day. 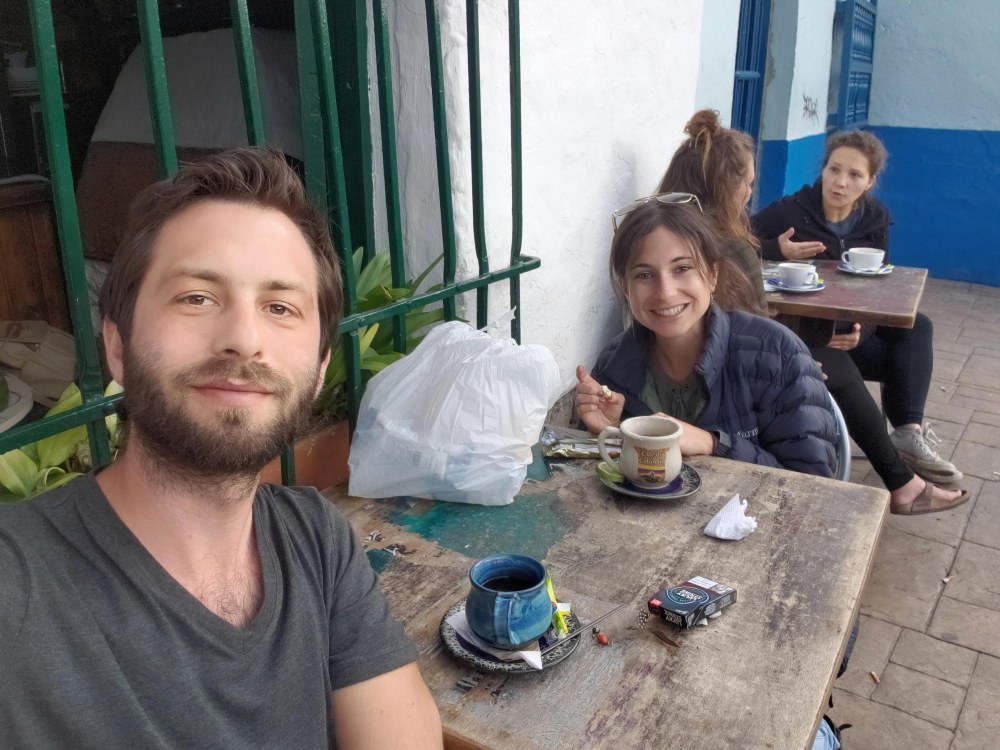 We met with my long-time friend Colleen and her husband.  I met her at the Kibbutz when we were living in Israel in 2006. We met in a very good restaurant and had a blast sharing stories and remembering the good times. This is what I love about traveling!! 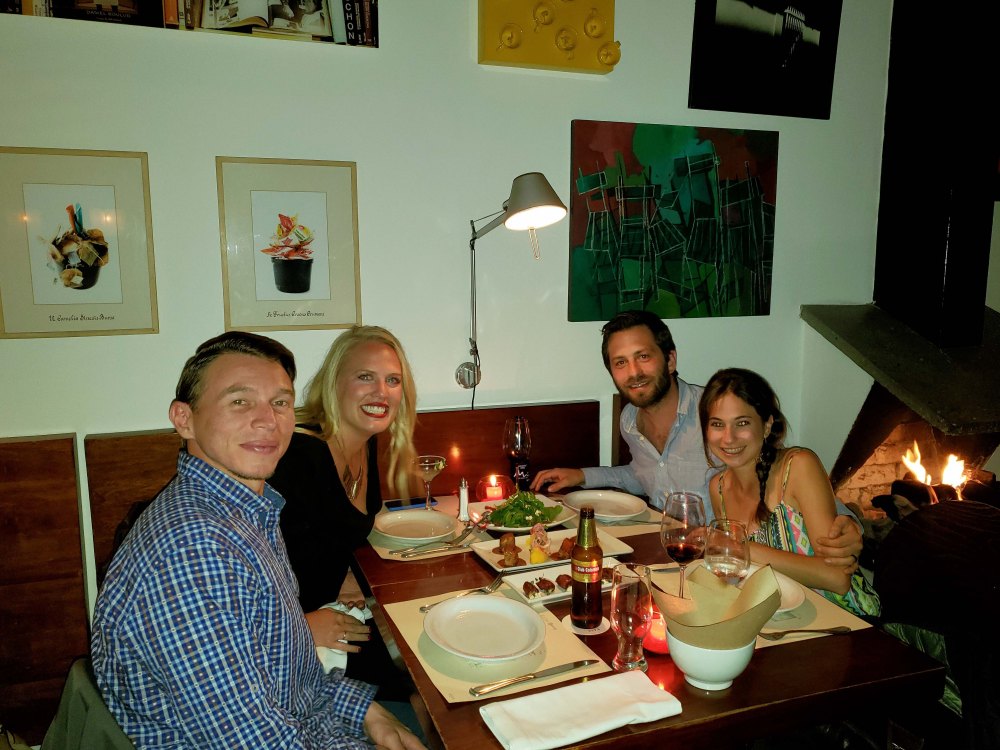 Bonus Pic of The Day:

Bogota streets have no names, they have numbers. It is very easy to locate a place without a map. (The streets from south to north are called CARRERAS and those from east to west are called CALLES. And the diagonals streets to them are called transversales and DIAGONALES. The addresses are given as follows: CRR 11#90-17 (someone who leaves at the street CARRERA 11, on the corner with CALLE 90, and 17 is the number of the block) or CALLE 90#11-17 (someone who lives at the street CALLE 90 on the corner with CARRERA 11 and 17 is the number of the block). Complicated, right?