Today is the second day in Dubrovnik. Today we separated as Tania and Nadeem are huge fans of the show Game of Thrones, so they decided to take a tour of the filming locations around the old town. We haven’t seen the show, so we booked an old city tour in the morning and a city walls tour in the afternoon. 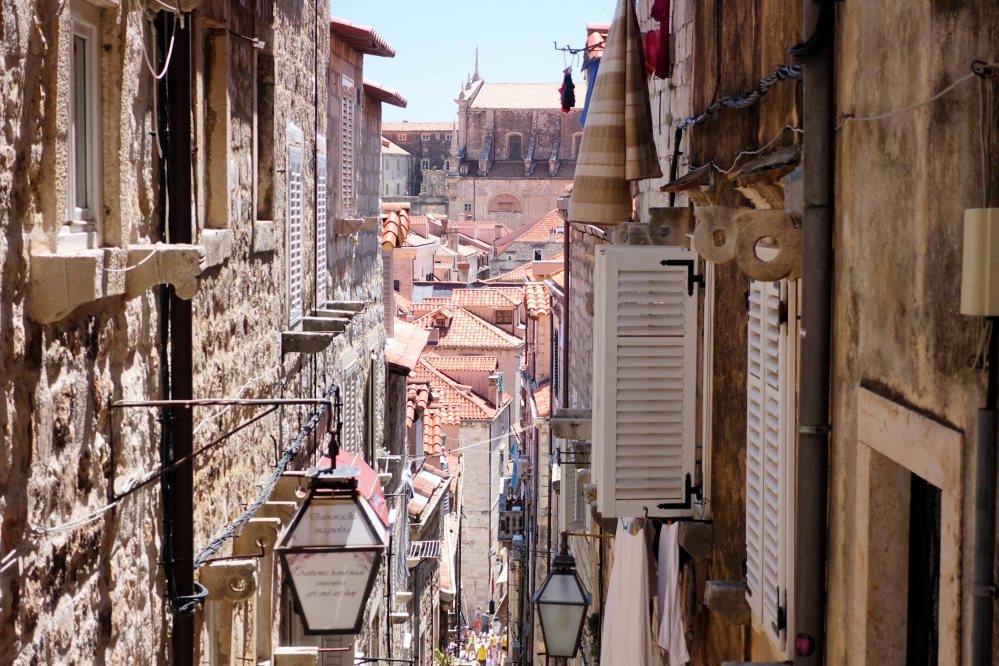 Everybody at the tour got a wireless set of headphones where you can listen to the guide without having to be looking at him. Great little device that greatly improves your tour experience.

The walk started with the big Onofrio fountain. Built from 1438 to 1440, the Big Onofrio’s Fountain is a sixteen-sided container with a cupola, and was one of the ending points of the aqueduct system. The aqueduct contract included the section which stipulated that the architect’s compensation would be penalized for every drop of water lost along the aqueducts way. Interesting to note the final result was flawless hence no penalty applied to the compensation. 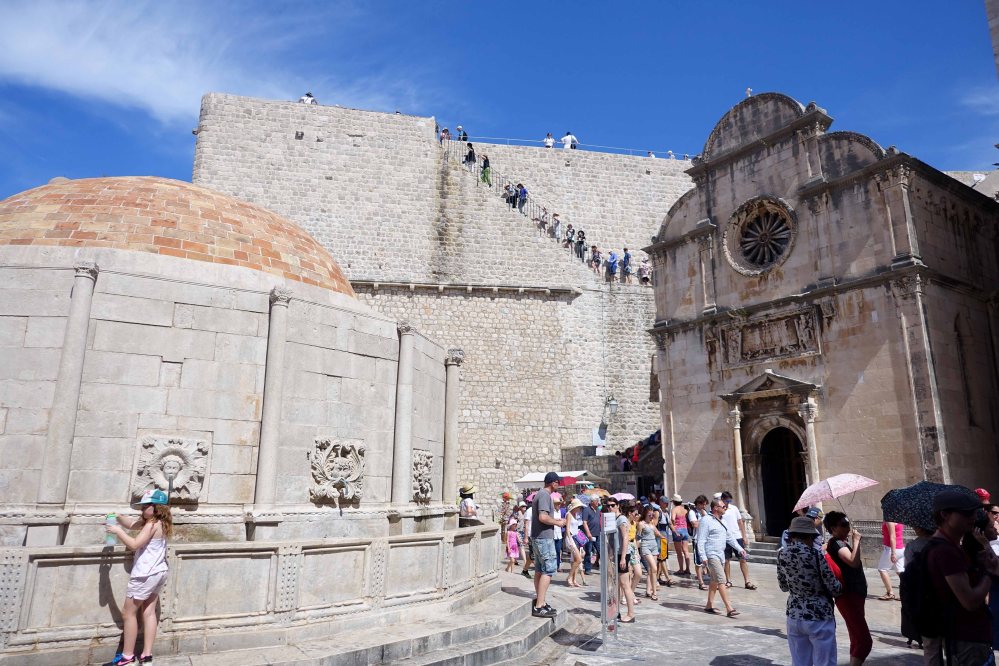 The fountain has unlimited drinking water and its used by all tourists to refill their water bottles.

On the way to the Jewish quarter, we briefly stopped at the Church of St Roc. Our guide explains that football (soccer) was actually invented here (in a jokey way). He explained that kids used to play an early soccer-related sport in the street next to this church, so the angry priest carved on the wall this message dated 1597: “Peace be with you, but remember that you must die, you who play ball here”

The Jewish quarter is almost indistinguishable from the rest of the city. The first mention of Jews in Dubrovnik dates to the late 13th century.  After 1492, when Jews were expelled from Spain (and later from Portugal) by Alhambra decree many Shepard Jews and Marranos came to Dubrovnik.

Today, the old Sephardi Synagogue can be found in the street called “Žudioska ulica” (“Žudio” in Dubrovnik speech – Jew – Jewish Street). The street connects directly to the Placa street (Stradun) and looks like any other street in Dubrovnik. In ghetto times, the alley was closed and no Jews were allowed to leave. The Dubrovnik synagogue is the second oldest synagogue in Europe, second only to the old synagogue in Prague. It is also said to be the oldest Sephardic synagogue is use in the world.

Many beautiful palaces are in this city. As early as 19th century, it was discovered by celebrities as a place to be seen. George Bernard Shaw once said that “those who seek paradise on Earth should come to Dubrovnik and find it”. 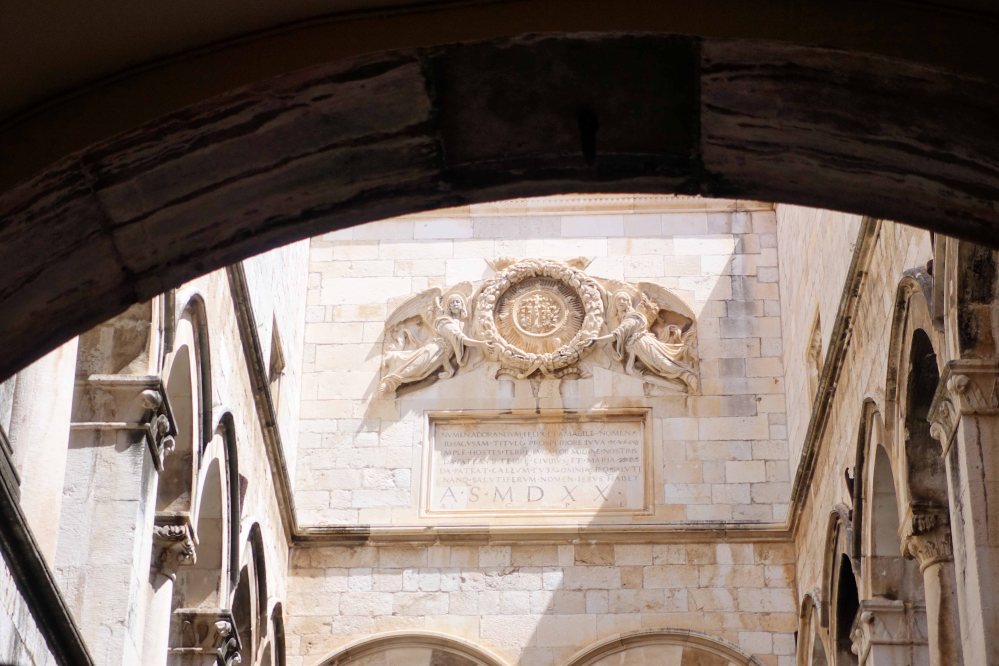 The Stradun is the main street, the limestone-paved pedestrian street runs some 300 meters through the Old Town. The site of the present-day street used to be a marshy channel which separated Ragusa from the forest settlement of Dubrava before it was reclaimed in the 13th century.

Our 3 hr tour ended in the beautiful old port.

The city of Dubrovnik  was built on maritime trade. In the Middle Ages it became the only city-state in the Adriatic to rival Venice. Supported by its wealth and skilled diplomacy, the city achieved a remarkable level of development during the 15th and 16th centuries. 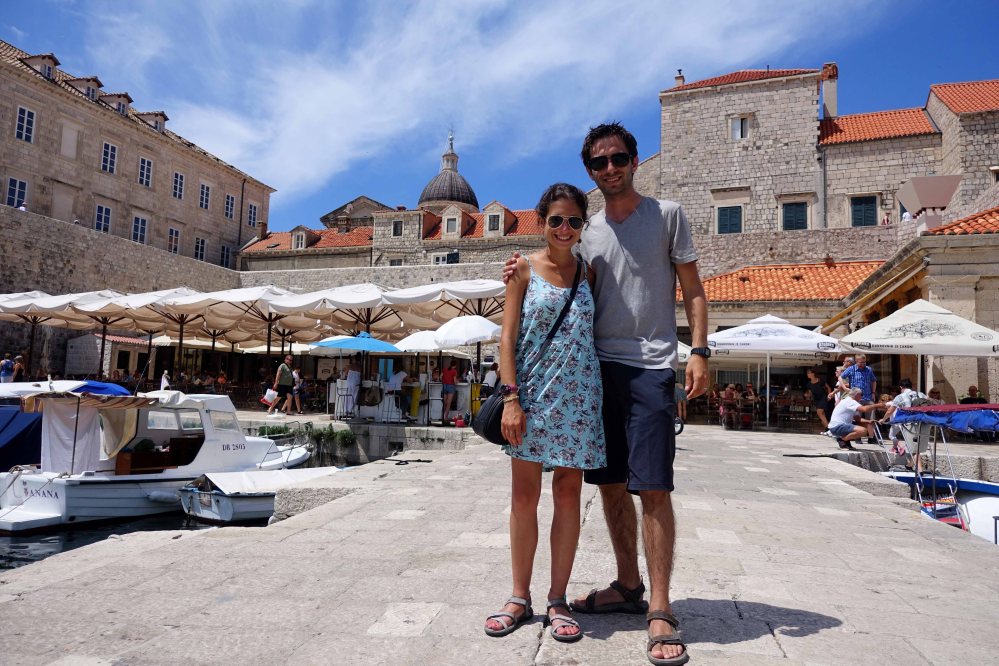 In the time of the Dubrovnik Republic, several forts protected the port: St Luke Fort, St John fortress, and Revelin fortress. Today the port is a safe haven for many private boats of local citizens.

After that amazing city tour we had a couple hours to kill, so we went to walk without any direction outside the walls. We found a nice cliff from where we were able to see the city and the St. Lawrence Fortress.

At the end of this cliff, we found this “secret” beach where mostly locals were sunbathing. A big contrast to the other beach the day before where it was full of partying tourists. 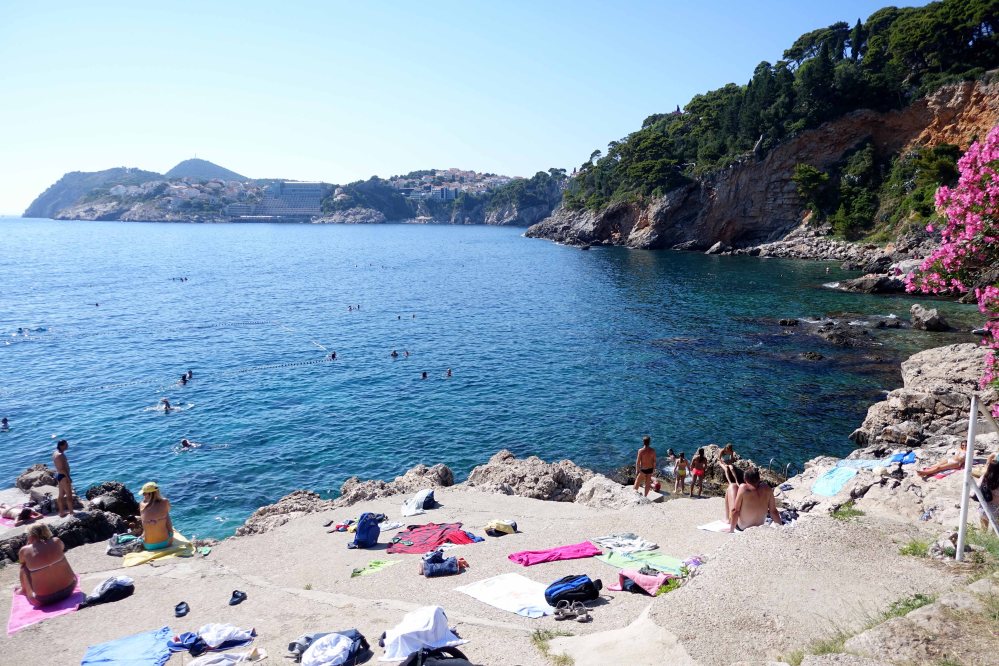 We came back to where we were meeting our guide for the Walls tour.

With numerous additions and modifications throughout their history, the Dubrovnik walls have been considered to be amongst the great fortification systems of the Middle Ages, as they were never breached by a hostile army during this time period. In 1979, the old city of Dubrovnik, which includes a substantial portion of the old walls of Dubrovnik, joined the UNESCO list of World Heritage Sites.

Dubrovnik has several entry gates, the most famous being the western Pile Gate. After entering from here, there are some stairs that get you to the top of the defensive walls. 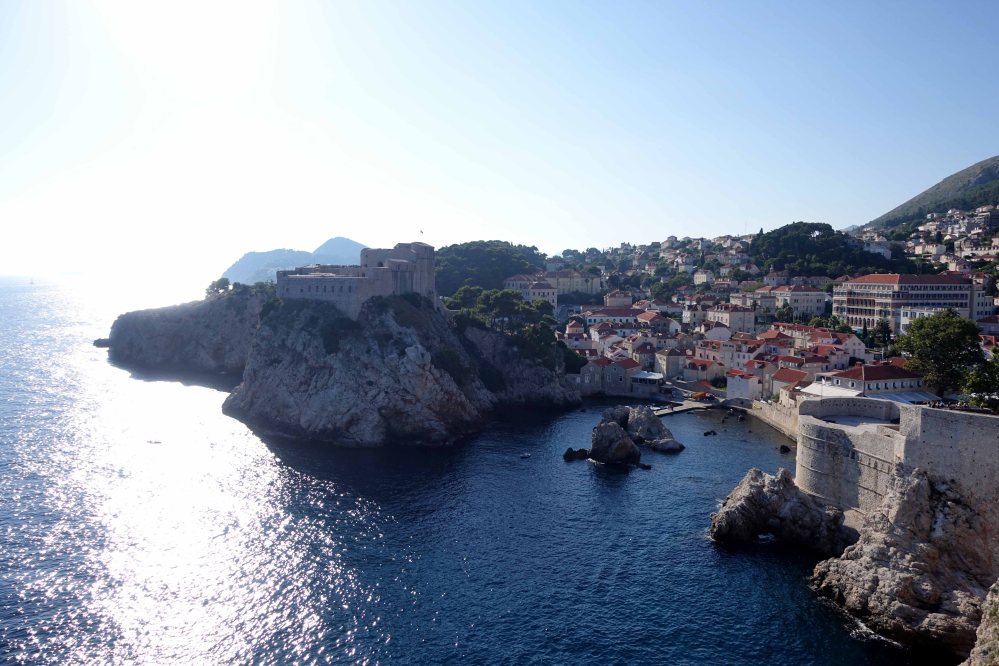 The view from here is amazing! 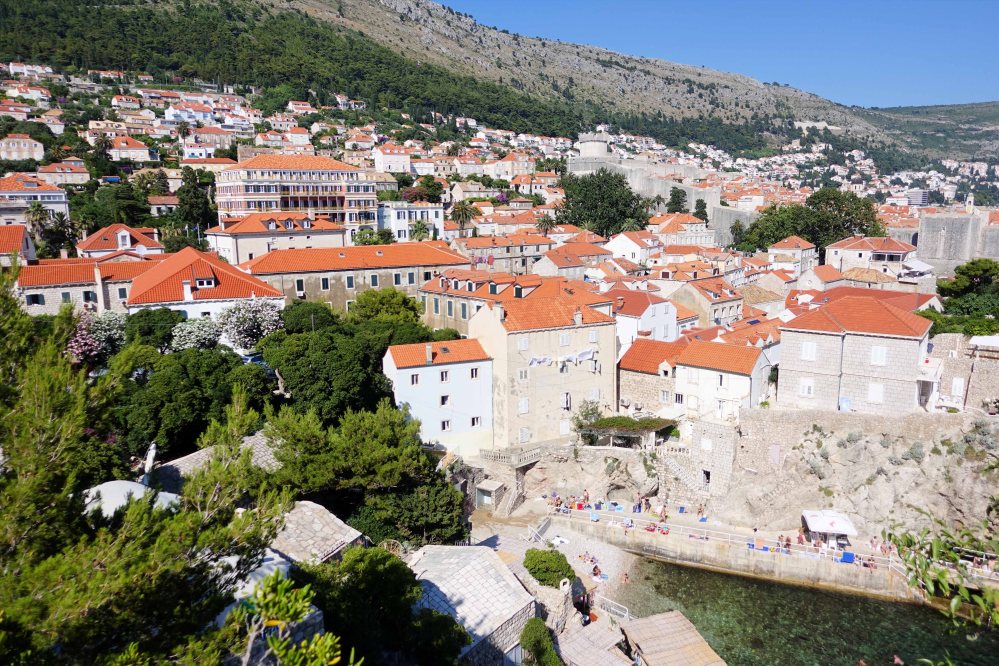 This complex structure, amongst the largest and most complete in Europe, protected the freedom and safety of a “civilized” and “sophisticated” republic that flourished in peace and prosperity for some five centuries.

Our guide was extremely knowledgeable and explained the history of this city throughout the years. 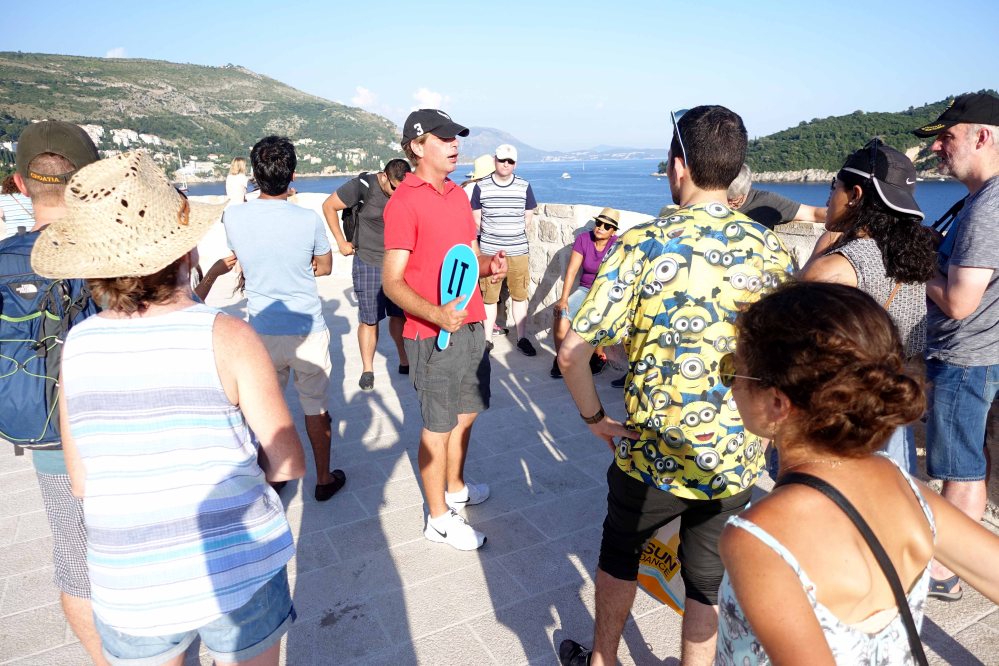 Soaring high above the Stradun, the Clock Tower is a magnificent landmark of the old town. Located at Luza Square which served as the market area many years ago. The city bell tower was constructed in 1444 and is 31 metres in height.

The tour consists of a full circuit of the walls. Every step is an opportunity for gorgeous postcard looking photos.

Amidst the Old Port, there is a building with three symmetrical vaults, that is the old Arsenal, a place where ships were built in the time of the Dubrovnik Republic. The vaults would be sealed by bricks in the period the ship was built in order to avoid foreign spies noting shipbuilding secrets. After the ship was built, the brick wall would be demolished and the ship launched into the sea. Today Arsenal is arranged as a restaurant. 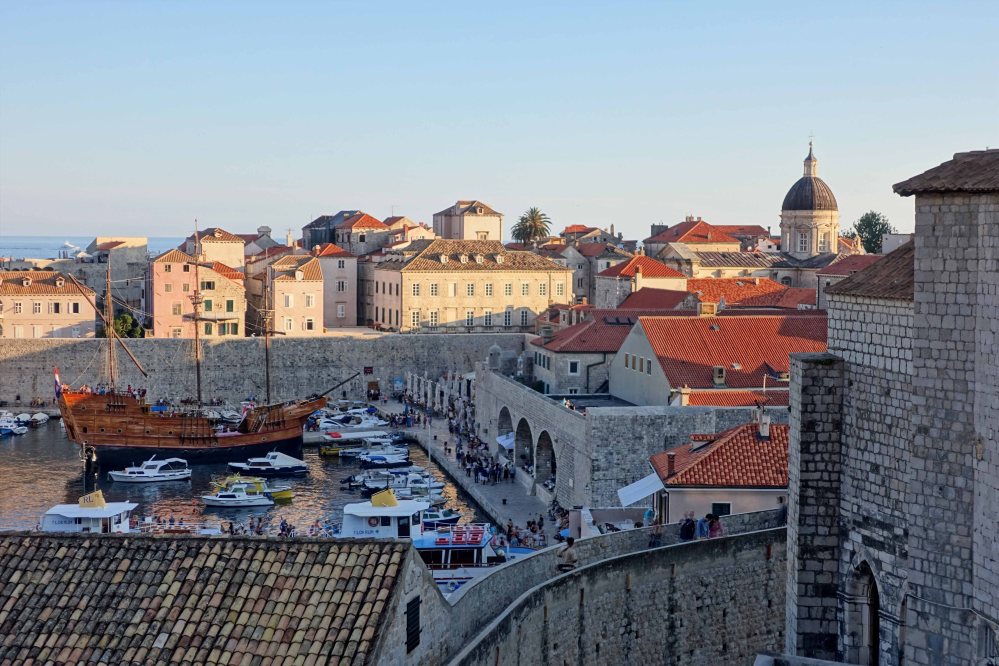 We were pretty lucky to see the arrival of the famous Karaka into port. Carrack ships were 3 or 4 masted ships used between the 14th and 17th century intended for cargo transport. They were among the largest ships sailing of that period.

More photos of the city:

This is the spot from where the best photos are taken. The sunset was happening behind us, giving the city a beautiful glow. If you haven’t been to Dubrovnik, I urge you to visit it. It is one of the most beautiful cities in the world. 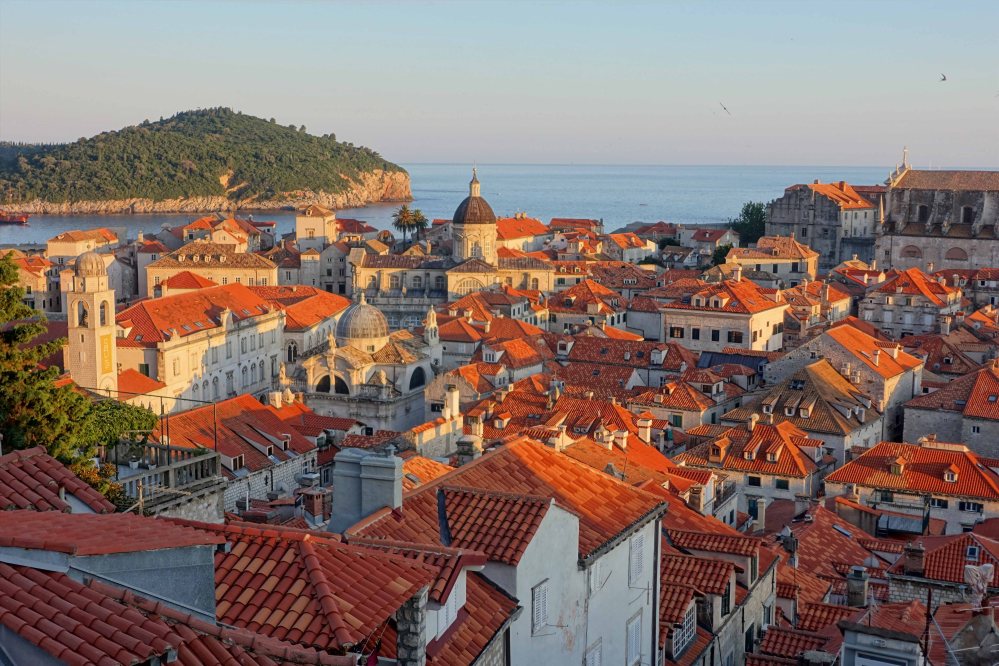 Our last stop was the Minčeta Tower. Originally as a strong four-sided fort, it is the most prominent point in the defensive system towards the land. Since Minčeta Tower is the highest point of the wall, it is considered to offer a seemingly “unforgettable” view on the city.

The guide perfectly timed out tour so we could watch the sunset from here.

That night we reconnected with Tania and Nadeem for dinner and a club.  We found a delicious Italian restaurant and then went to the big club that is built in the old city.  It was filled with tourists but the aesthetic of this club was unique and impressive.  It was our first club of the trip along with our last.  We have realized the loud late night thing is not for us anymore unless we have fun friends to motivate us to join them!

Bonus Pic Of The Day:

Dubrovnik was besieged and attacked by forces of the Serb-dominated Yugoslav People’s Army (JNA) in late 1991. During the siege, of the 824 buildings in the Old Town, 563 (or 68.33 percent) had been hit by projectiles during the siege. Of these 563, nine buildings had been completely destroyed by several major fires that occurred.

It is a testament to the resilience of the ancient walls that more buildings in the old town were not destroyed during the bombardment; the ancient walls in fact were more effective at resisting modern weaponry than contemporary structures in the city’s periphery.