In the  morning we boarded again the amazing Blue Star Ferry for a 4 hour cruise to the port of Piraeus in Athens. The Port of Piraeus served as the port of Athens since the ancient times. From there a quick metro ride took us directly to our hotel.

We left the hotel to go walk around the area of Monastiraki where many tavernas, cafes, and shops line the streets. That is where we met Genevieve, a friend from SD.

We went straight to eat as we were staaaarving! we found a great cheap greek kebab place. 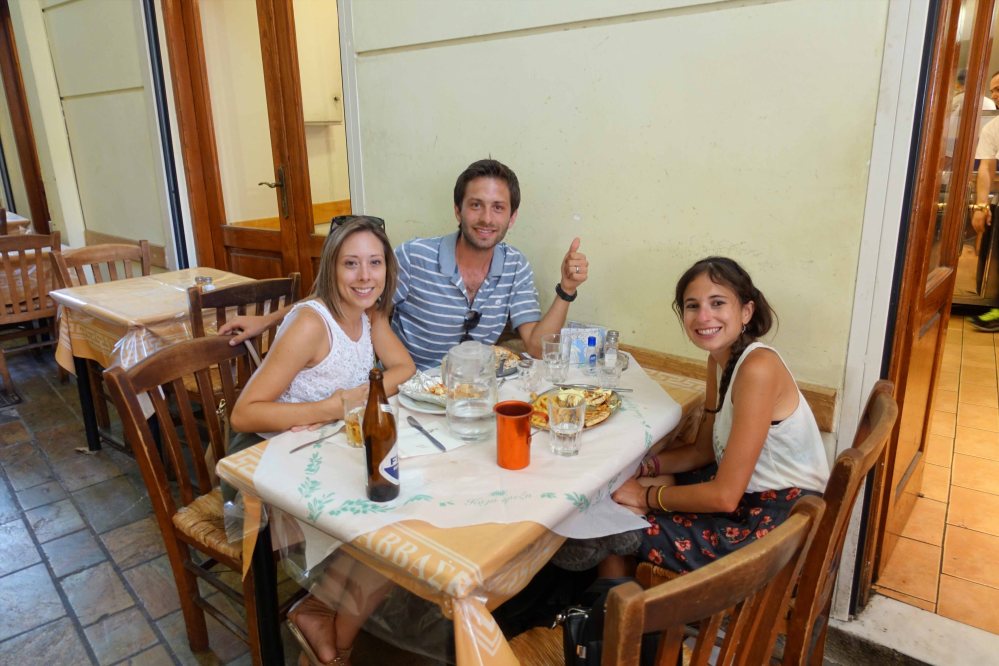 This was out-of-this-world good.

She took us on a nice walking tour around the area which was very lively and full of designer stores.

We walked to the Syntagma square where the parliament house is located. The Square is named after the Constitution that the first King of Greece Otto was obliged to grant, after a popular and military uprising on September 3, 1843.

There are a couple funny dressed soldiers guarding the building, they were friendly and photos were allowed. 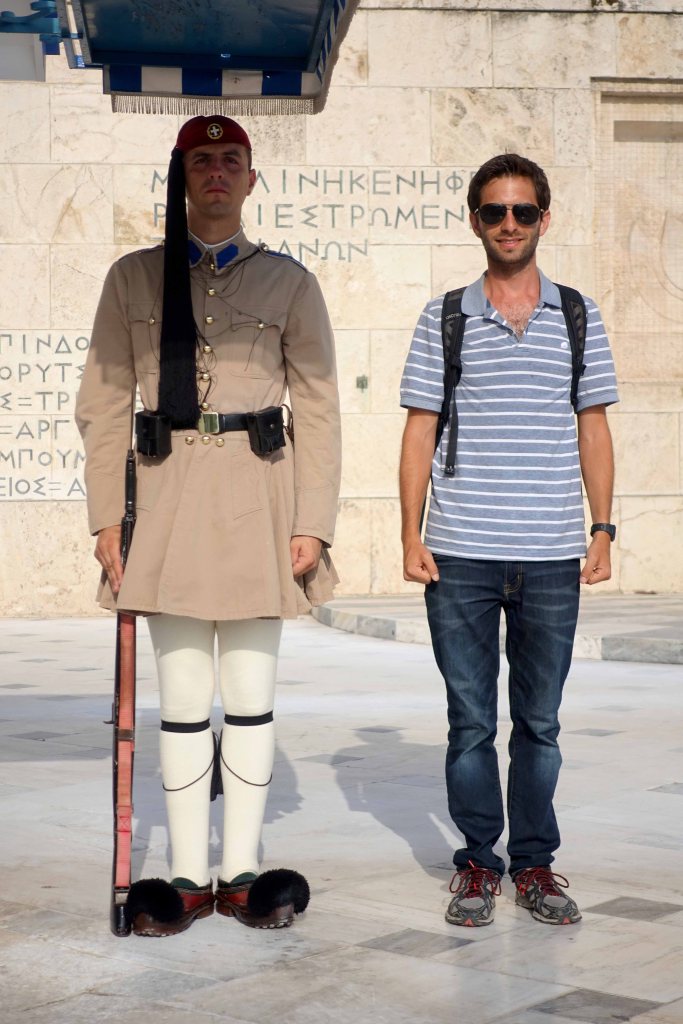 The Parliament is the supreme democratic institution that represents the citizens through an elected body of Members of Parliament (MPs). In the current composition, the Parliament consists of 300 MPs elected every 4 years.

As we were told, because of Greece’s economic crisis, the building looks very run down as they are not allowed to hire more people for government jobs, so there is nobody to maintain the façade of the building. 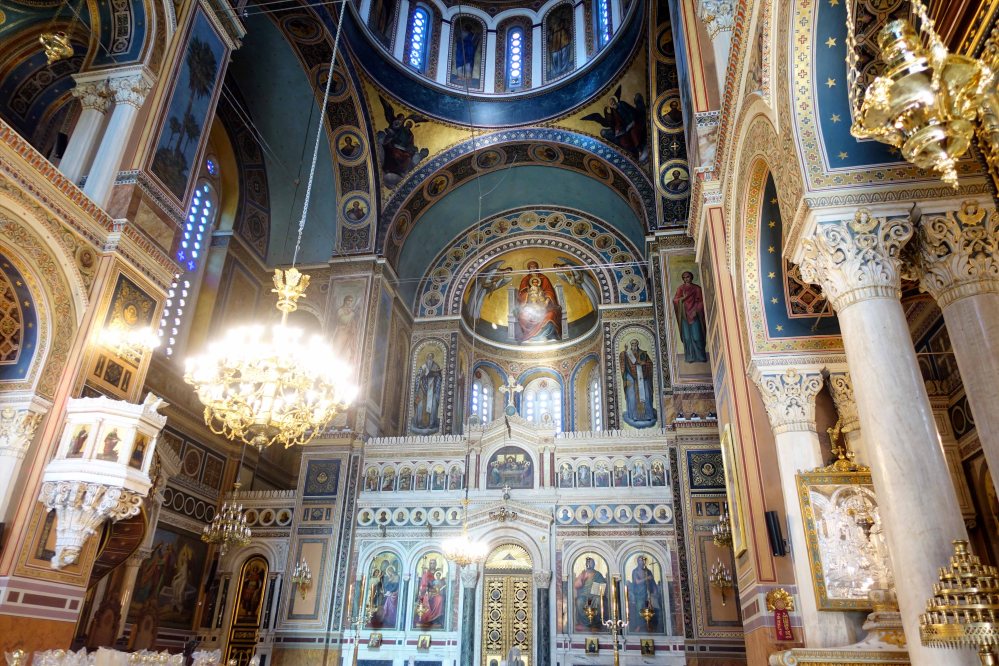 We walked around the city center where it is full of ancient Greek temples, we are going to be visiting all this tomorrow. 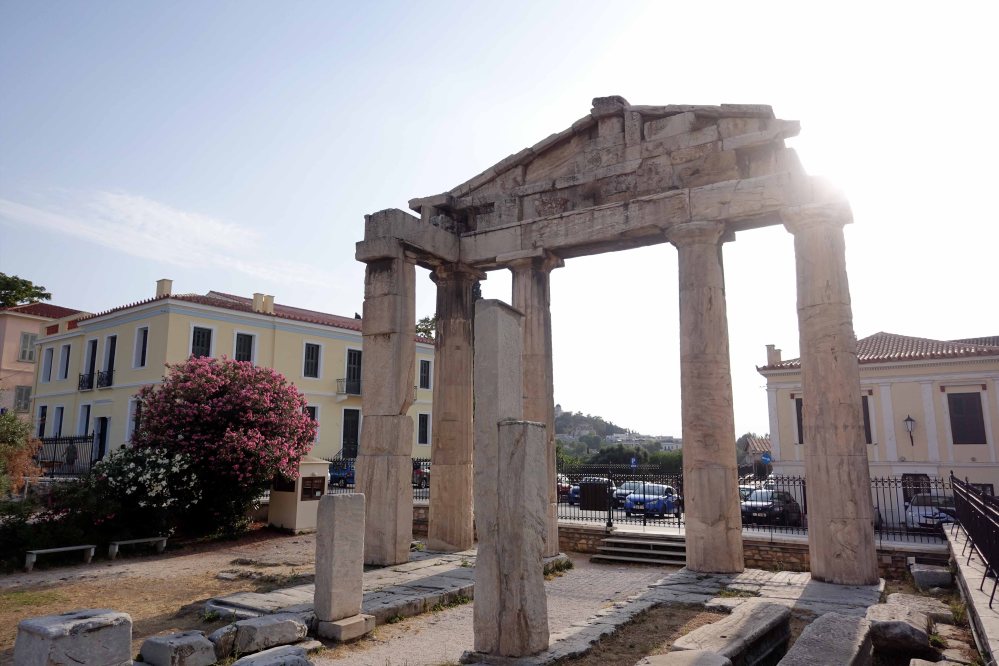 After this, we ended in the hill of Areios Paios which is a nice rock bellow the Akropolis where you can enjoy a nice view of the city at sunset blocked by a bunch of horny 16-year-olds making out for hours. Most of the buildings here in Athens are built with Marble which is extremely slippery; one French old lady slept while walking at this hill and completely fractured her ankle, it looked nasty. Genevieve was basically the only “local” hero who tried to call an ambulance, it was really hard to explain exactly where we were… “yes, we are on top of a rock below the Acropolis, please send help!” It took forever for paramedics to arrive which reminded us how lucky we are with services like that back home! 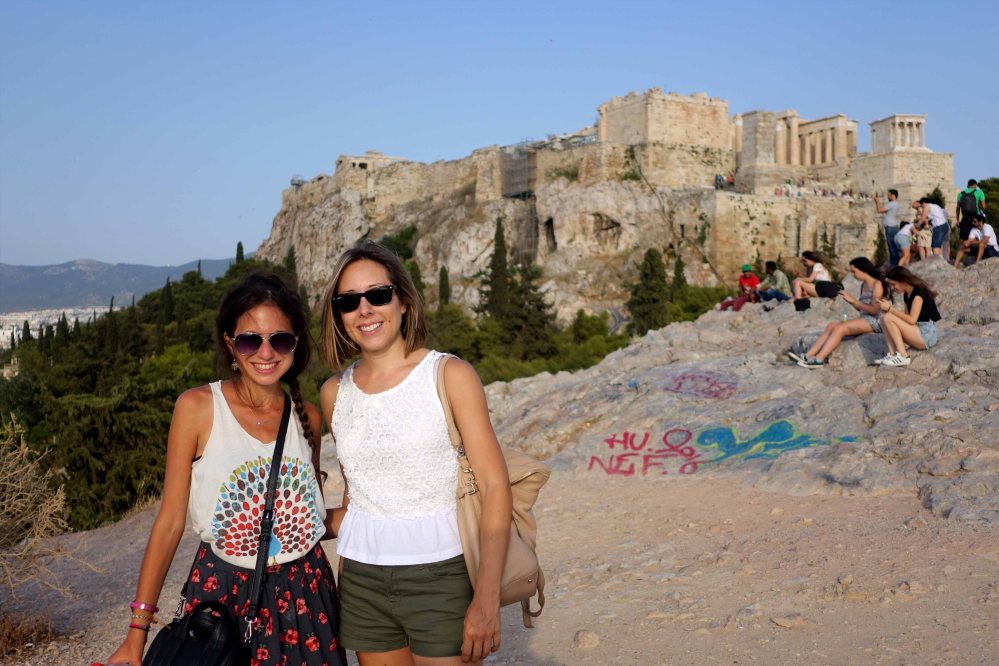 We went for dinner in the main area of Plaka which is absolutely amazing. The narrow streets full of restaurants and souvenir stores made a great end of the day.

We sat in a restaurant to rest our legs. We just shared a huge appetizer plate and a wine as we were not really hungry after that huge lunch we had. Tomorrow we will have a long sighsteeing day!

Bonus Pic Of The Day: Why do Greek soldiers use a skirt as a military uniform?

The attires that had an origin in the mainland often were characterized by a special white pleated skirt, known as the “foustanella”, legs covered by tights, and the shoes with the fuzz ball on the tow tip, known as the “tsarouhia”. The purpose of the foustanella was to leave the legs completely free to run like the wind and hike on the rocky mountain grounds. This attire is characteristic of the 1800’s when these people lived in the mountains constantly on the run and fighting for freedom.