We started our morning a little late after a rough battle with the snooze. Too late for breakfast so we made it an early lunch with some Indian food. We recently discovered how good they cook Okra here, or how locals call it “lady fingers”. It came by pure luck in one thali and since then it is our “go-to” every meal and without disappointment so far.

We walked to Udaipur’s magnificent City Palace. This place is massive, you follow a pretty easy to follow route that takes you around the grounds, bedrooms, the royal kitchen, the audience hall, etc… 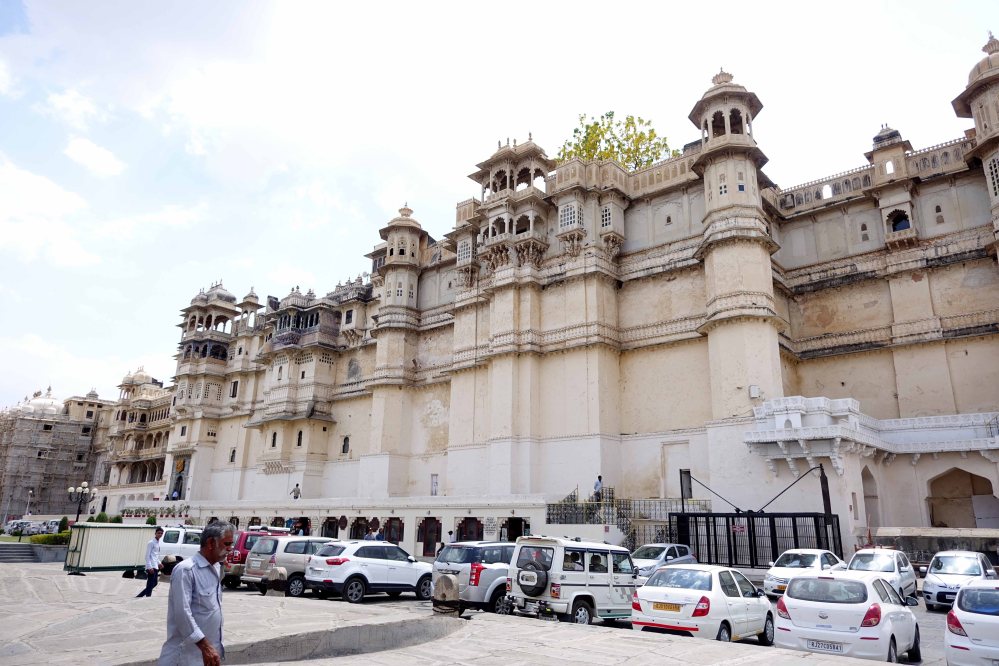 It was built over a period of nearly 400 years being contributed by several kings of the dynasty, starting by the Maharana Udai Singh II as the capital of the Sisodia Rajput clan in 1553, after he moved from Chittor. 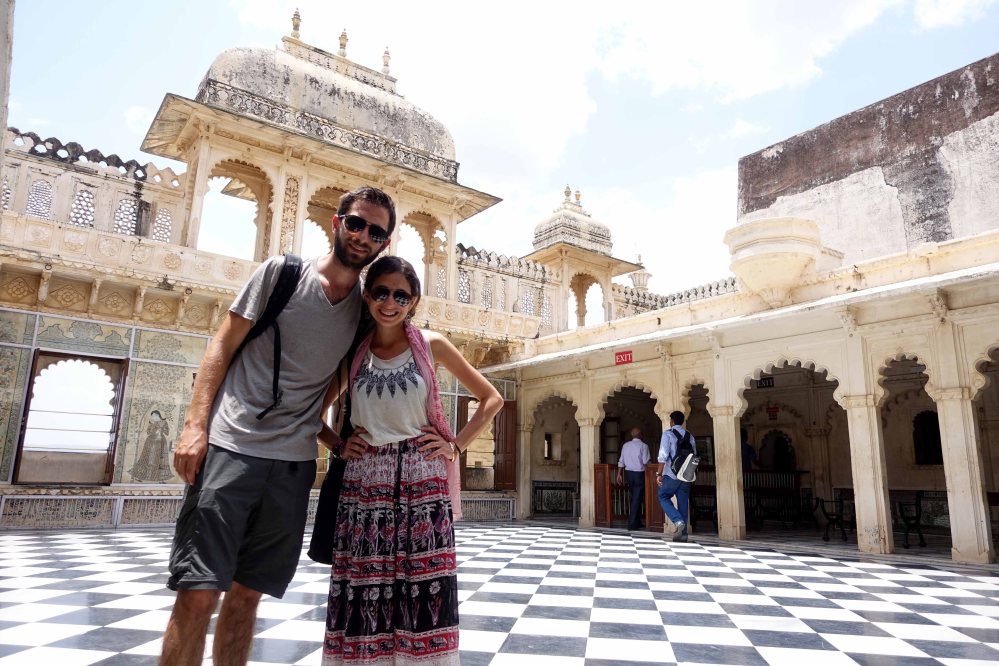 The City Palace in Udaipur was built in a flamboyant style and is considered the largest of its type in Rajasthan, a fusion of the Rajasthani and Mughal architectural styles, and was built on a hill top that gives a panoramic view of the city and its surroundings. 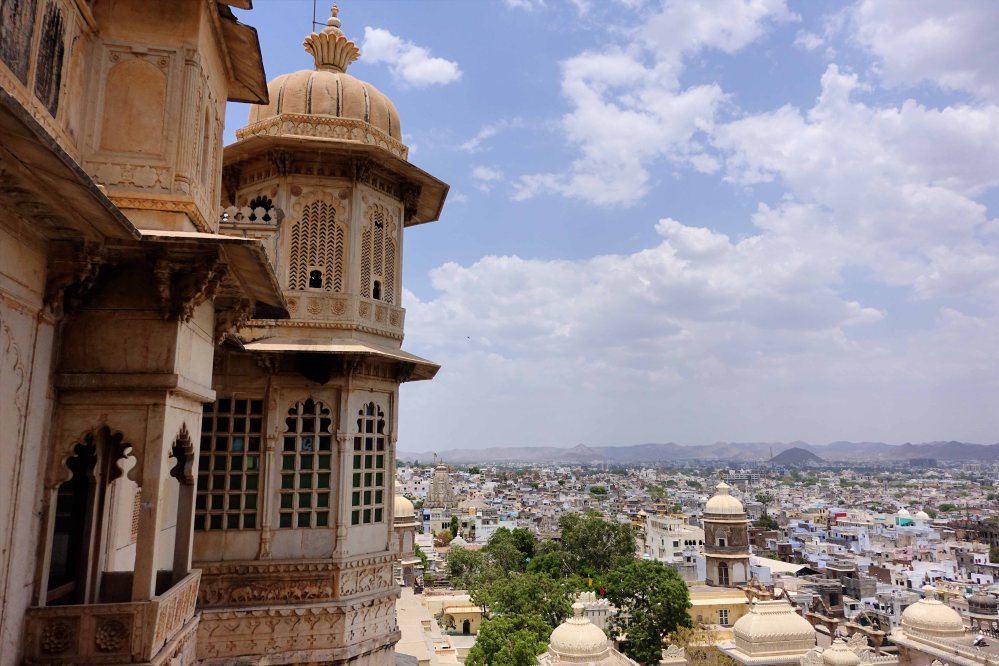 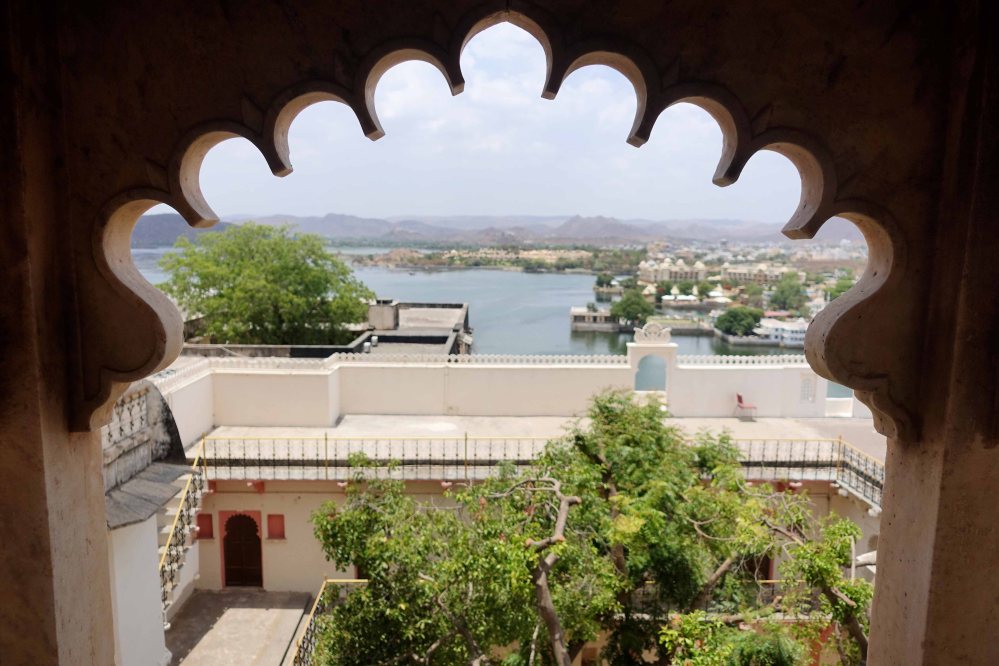 We are very tired of visiting Indian Palaces by now, but this one still impressed us. Some of the rooms are decorated with crystals, others with very detailed paintings. 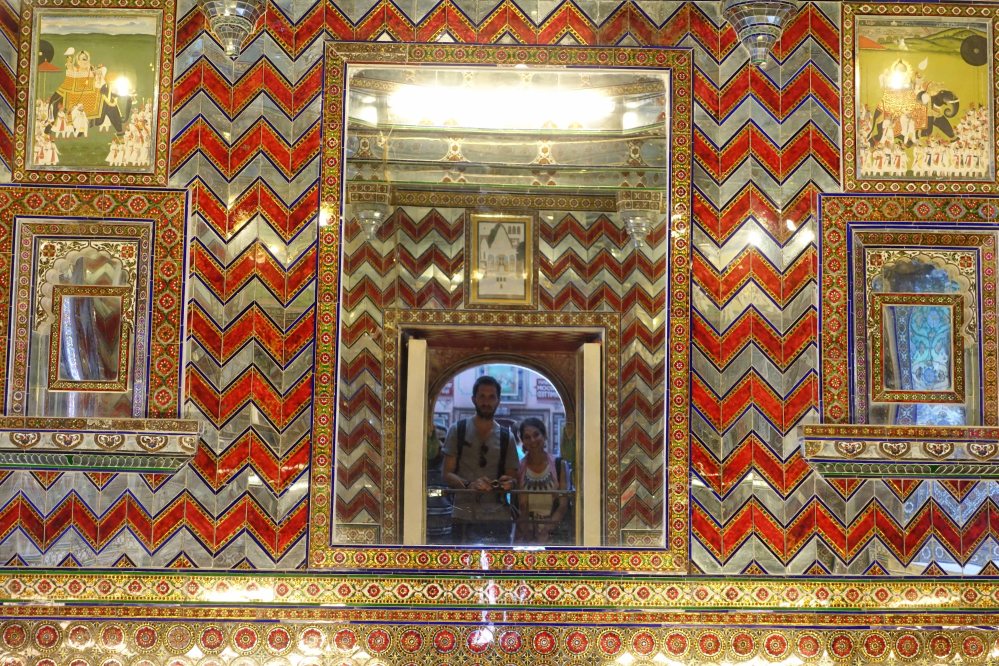 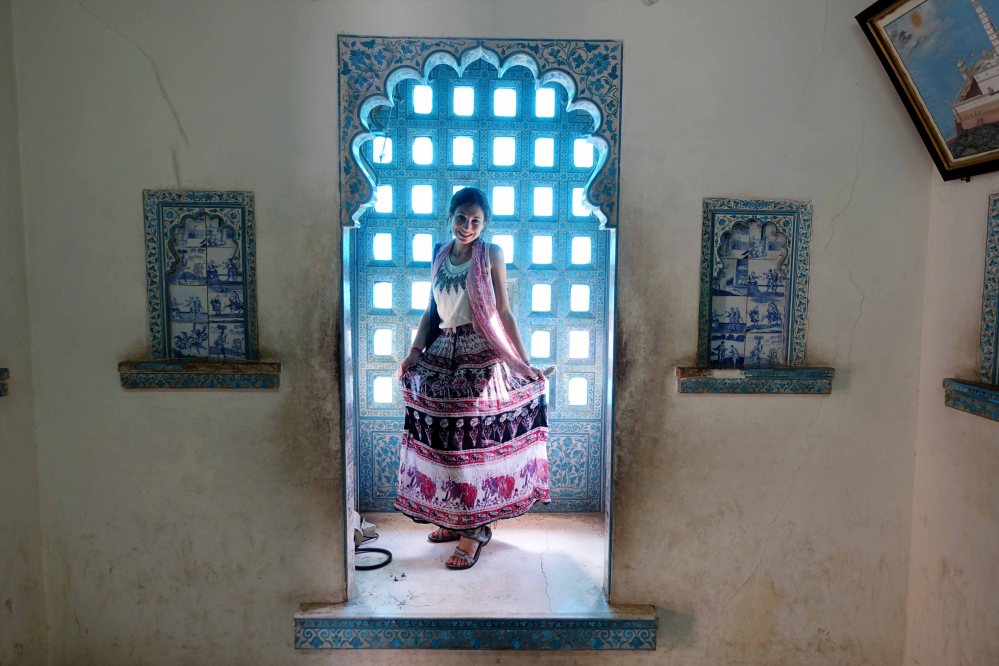 Some other rooms even look like a sketchy strip club in a bad part of Tijuana. 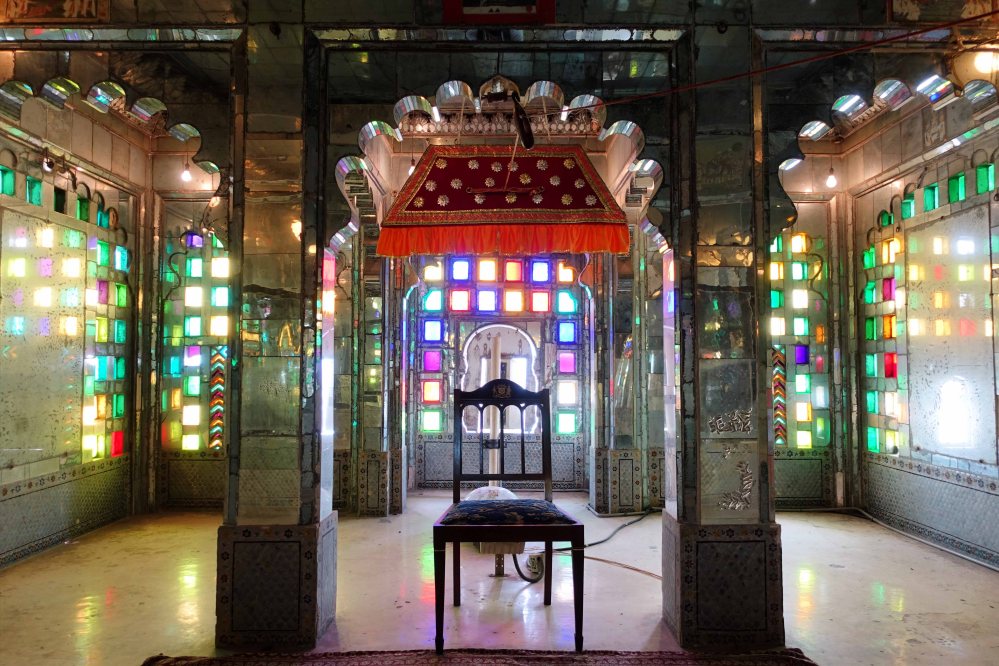 We walked around the lake until we reached the hippie part of town, where all the hostels and some restaurants are located. It was pretty dead when we got there so we headed back to our hotel area to take a sunset cruise around the lake.

Apparently no sunset cruise today because there is no sun, so we took a private small boat around the lake. They take you around the fancy hotels, you cannot get that close otherwise unless you are staying the night there, and if you do, then you might want to ask the bank for a loan because those rooms go for around $600 – $1200 per night. Why the hell there is such a big market for gigantic fancy hotels here in Udaipur? no idea. 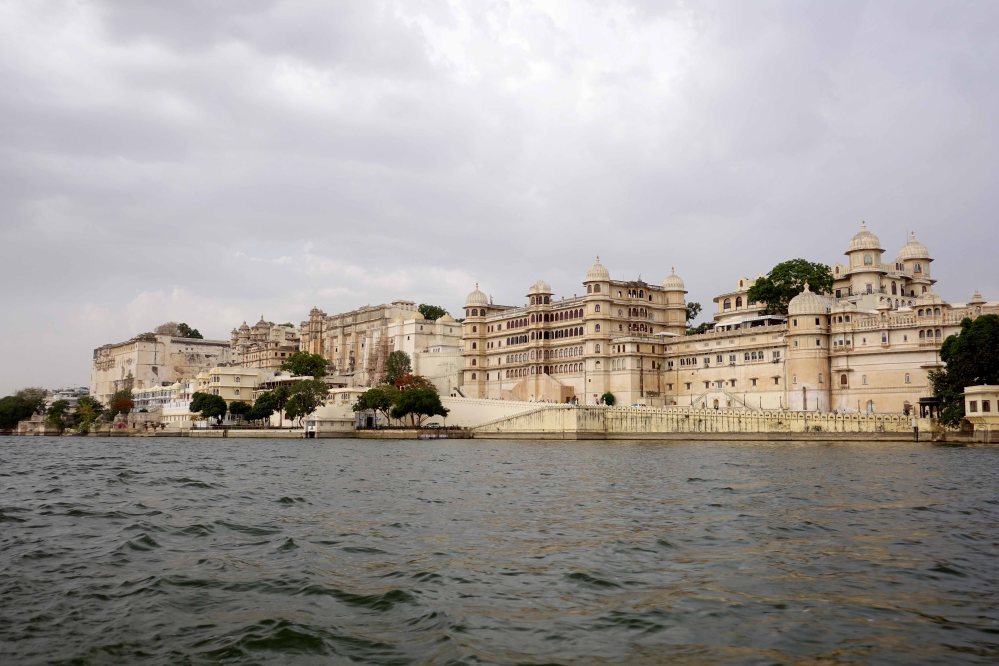 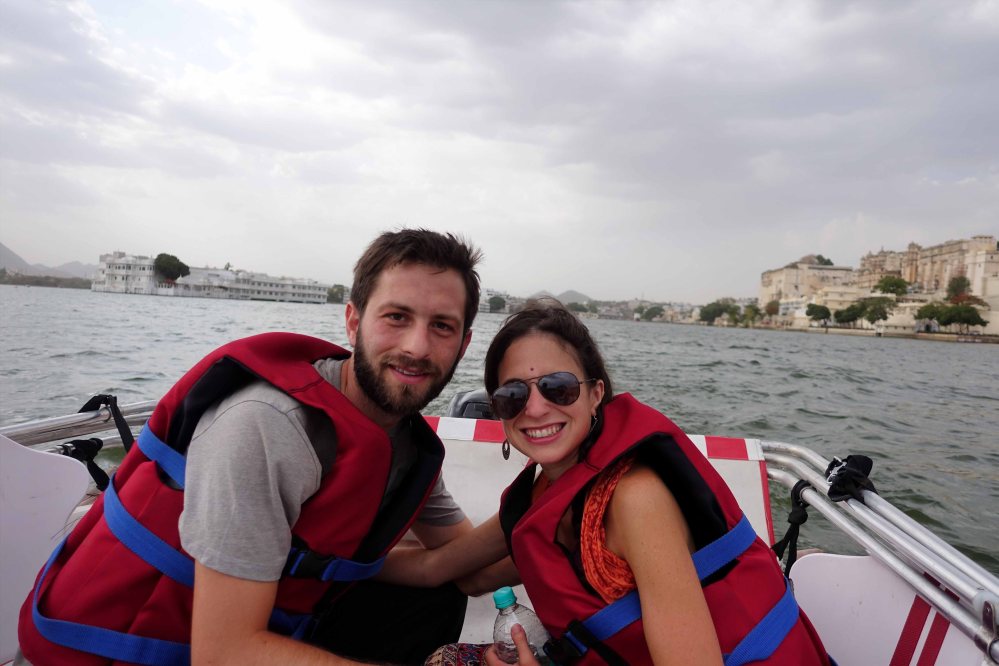 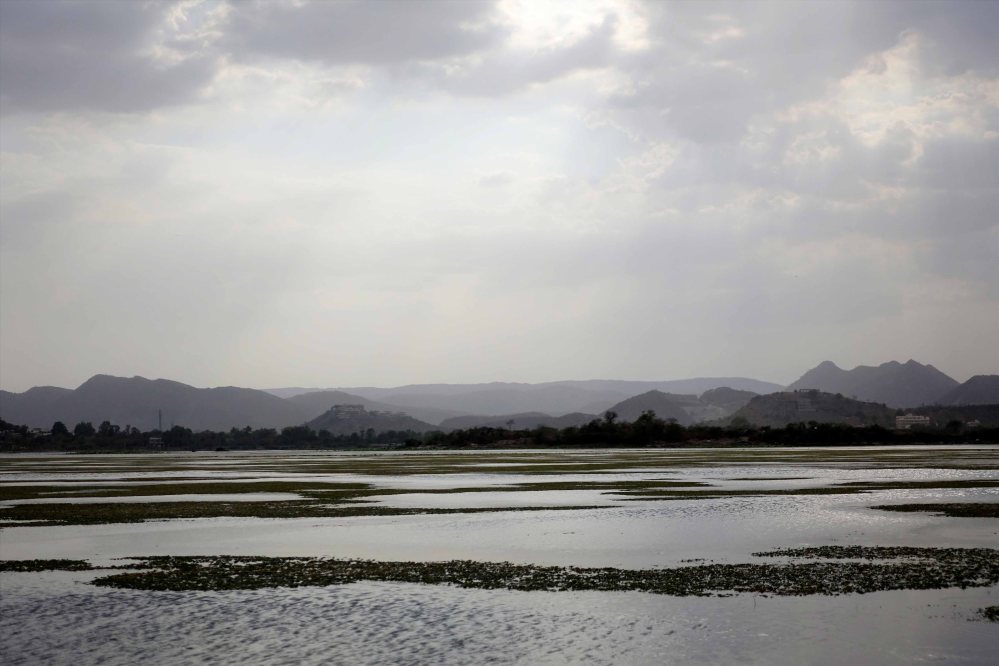 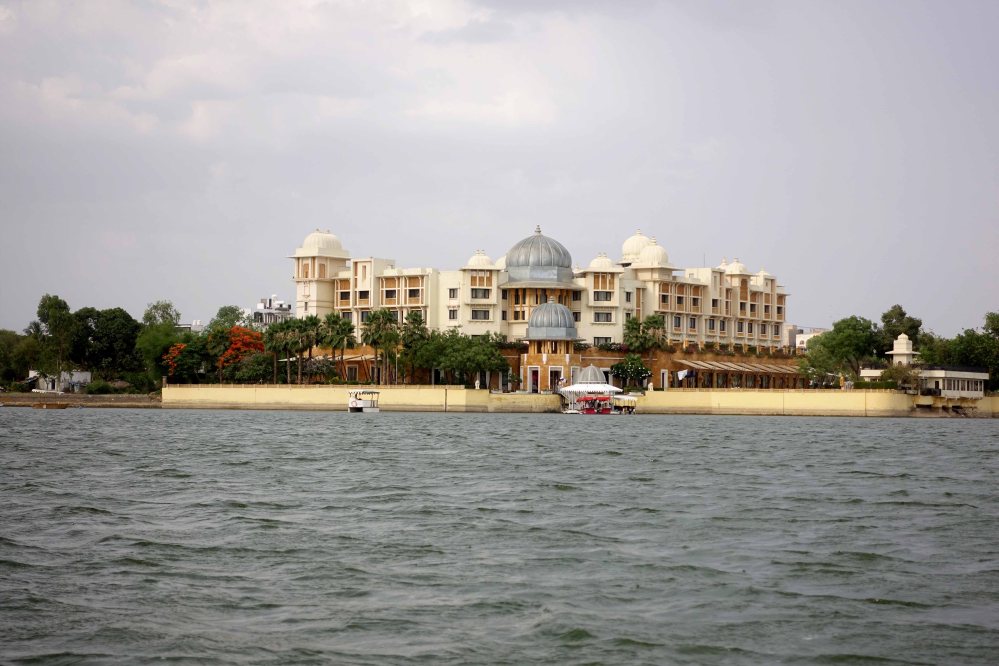 James Bond Octopussy was also filmed in here, the Lake Palace. The subsequent publicity has resulted in the nickname of Udaipur as “Venice of the East”. In 2009, Udaipur was rated the top city in the World’s Best Awards by Travel + Leisure. 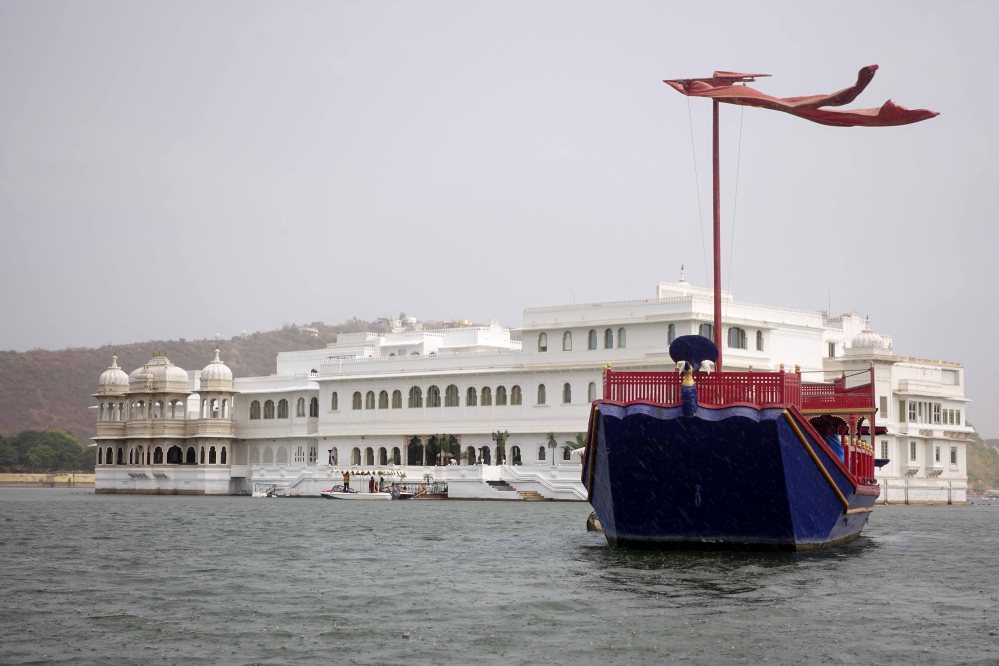 We went to eat to another rooftop restaurant (basically all restaurants here are rooftop restaurants) to celebrate our last night in this amazing city and we ordered the Chaat snack which had rice krispis, vegetables and a chili sauce, it was crazy good. Sarah was very happy for her new bangles that she bought! 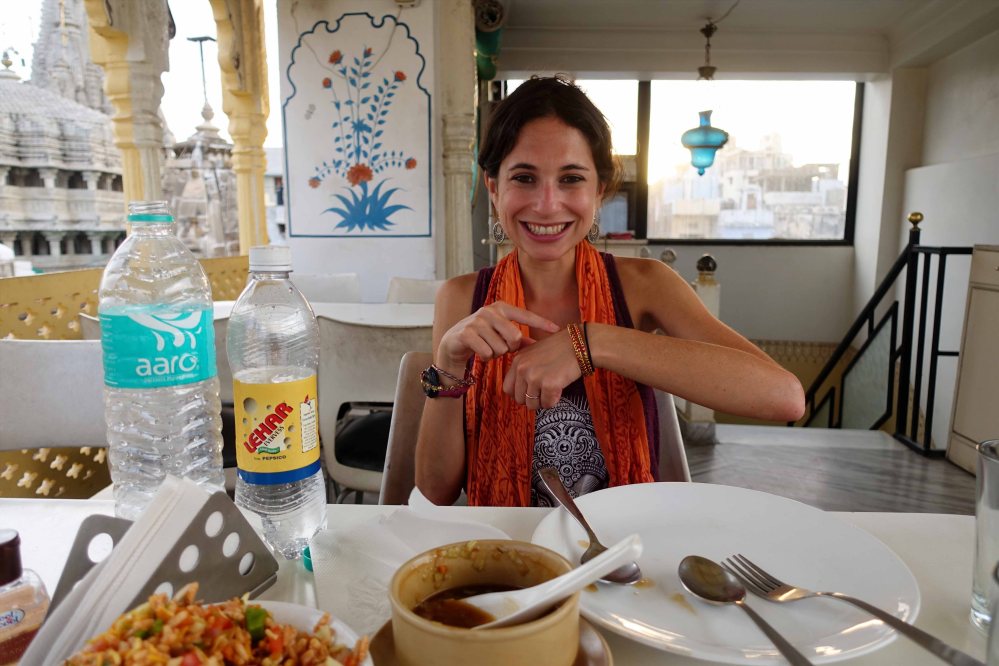 We left the best city so far in India to go to the busiest one, Mumbai. Honestly we were pretty scared as people often compare Delhi to Mumbai so we were with our guard up. Udaipur has a really small airport where there only like 5 flights a day and IndiGo airlines staff were pretty nice to us at check in as they let us bring the unshippable box full of souvenirs with us as hand baggage.

Then the flight got delayed 2 hours as usual as it is the norm here in India. The flight took around an hour and we arrived at Mumbai Airport, we arranged hotel airport pickup because we are paranoid of Indian big cities (thank you Delhi), the hotel guy was waiting there for us and that’s were things started to go sour. He first asked me for my cellphone (red flag #1) to put his sim card in because apparently the drivers number was saved in there. Then, the sim card was not working so he tried to get us into a normal airport taxi (red flag #2), obviously we didn’t get inside the taxi, then he called someone else using my phone but never explained anything (he didn’t speak English), he just kept walking us around in order to find someone to drive us. Other mafia taxi drivers started to gather around us and started trying to convince us to take them instead. We did not like that situation at all so I called the hotel and told them I’m ditching his “official airport pickup” and went back to the terminal to hire a taxi.

In order to go inside it took a lot of convincing and a little bit of yelling to the military police at the gate to let me in again to book a taxi (you can’t get in the airport unless you are flying). This time we didn’t book the official taxi and instead went with those private taxi companies which use GPS tracking devices and they match you with a taxi where you know the license number and drivers name immediately. The drive was perfect without incident! saaay whaaaat??

Mumbai lacks of budget accommodation options. Our hotel is the most expensive of the trip so far AND the worse by far. It looks we could both get raped in here but its full of other western backpackers which is always good. The staff is as creepy as Jack Nicholson in the shining and the room was probably designed by a blind man with brain damage. By the way, the hotel name is Travellers Inn so you avoid it like the Black Plague. 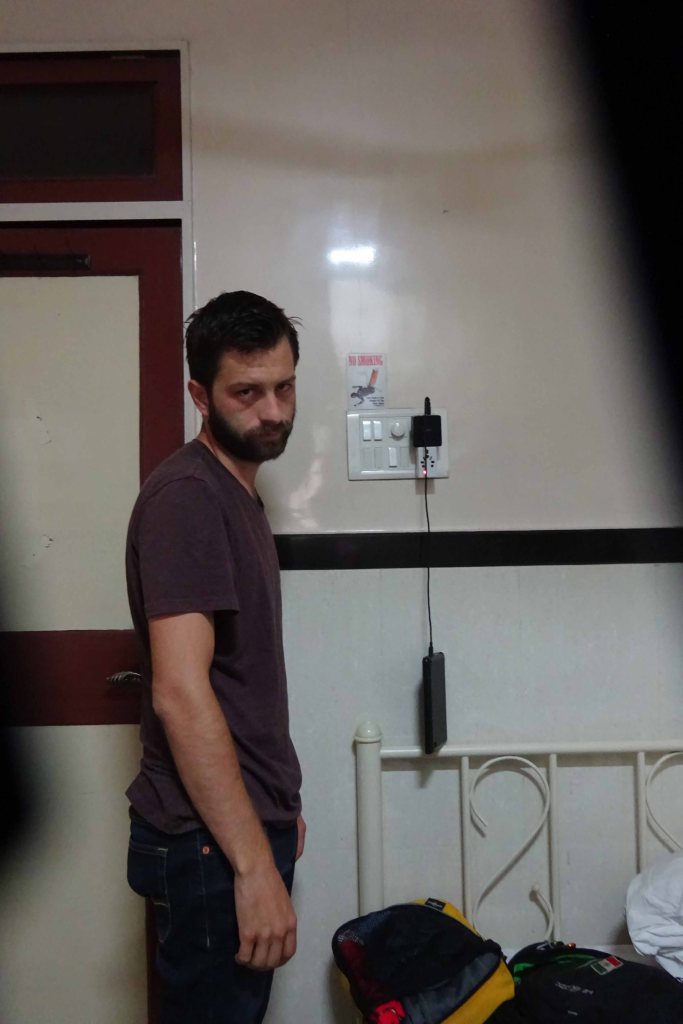 Anyways, the first impression of Mumbai was actually great, cleaner city, friendlier people and sidewalks!! Yes, first time we see sidewalks in India and are fantastic to walk on them, it feels good. I think we are definitely more appreciative of the little things in life now; if we had started the trip here, sidewalks would have been unnoticeable for us. But enough of sidewalk talk.

We walked to have some delicious south Indian food. One of the main problems here in India is that most of the food is soaked in gravy, this gets old really fast and now we try to ask for dry dishes. Most of the time “Dry” still involves some gravy, just instead of 5 gallons, they use 4.8 gallons. South Indian food is usually drier dishes so we like it more. Punjabi food has been the most disliked for us so far. 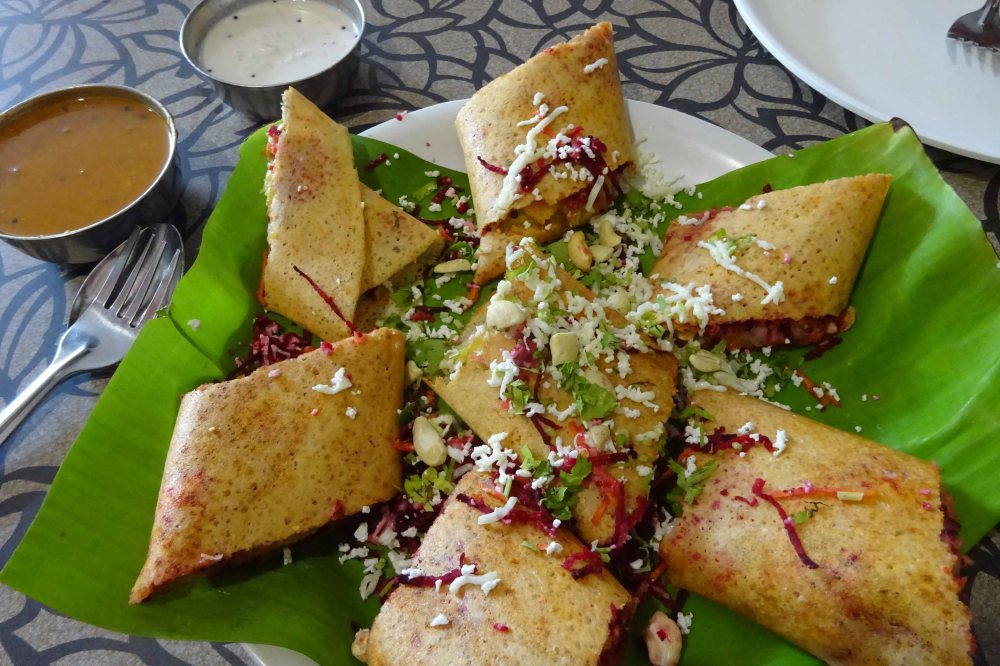 They give you the mouth freshers (anise seeds) on a plate with your change on top, these guys will definitely get an “A” rating from the health department. 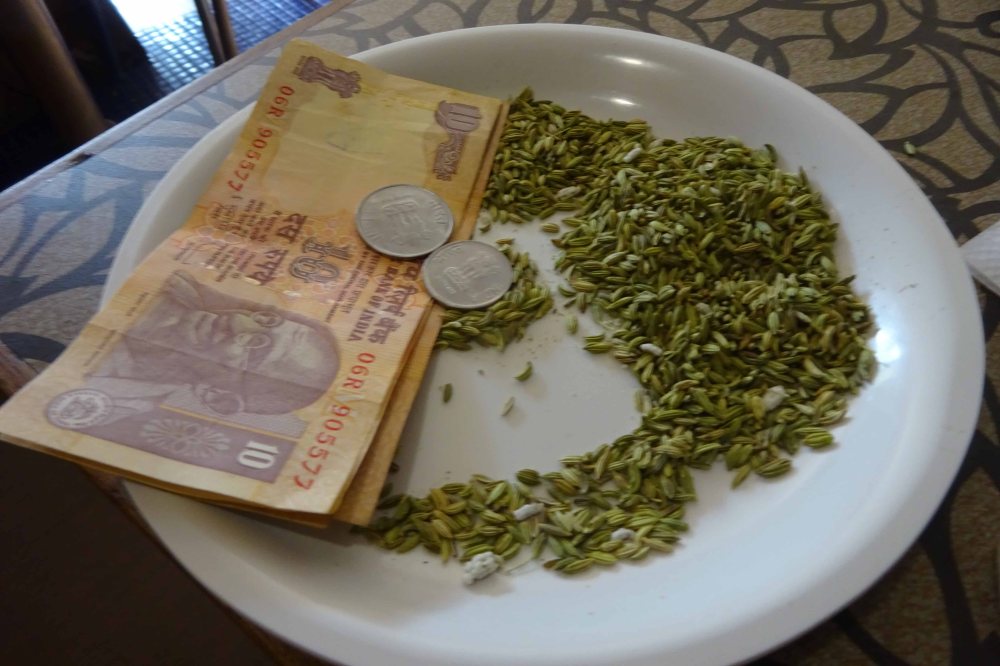 I was on a mission, fix the laptop or buy a new one. I called Dell’s service center here in Mumbai to see if I can take it but apparently it takes 4 days plus ordering the parts, you can image how long things here in India can take so it was an impossible plan for me. I decided to go to the electronics district to find the parts myself. I left Sarah in the hotel because usually those areas are not very safe, or woman friendly, or interesting for Sarah anyways. It took me around 3 hours to find the problem with the laptop and then to find the adapter needed but now the computer was fixed and I was happy (and you too should be because the blog continues!)

Bonus Pic Of The Day: In our infamous “toilet series”, this is a gem. During my travels I’ve seen some pretty badly design bathrooms, but I think this one tops the list. Most of them have the shower next to the toilet, but I’ve never seen one with the shower right on top of the toilet, making it impossible to stand up under the falling water.  I always wonder who designed this? do they not realize how stupid this is? are they stupid themselves? is everyone stupid here? please someone explain…. 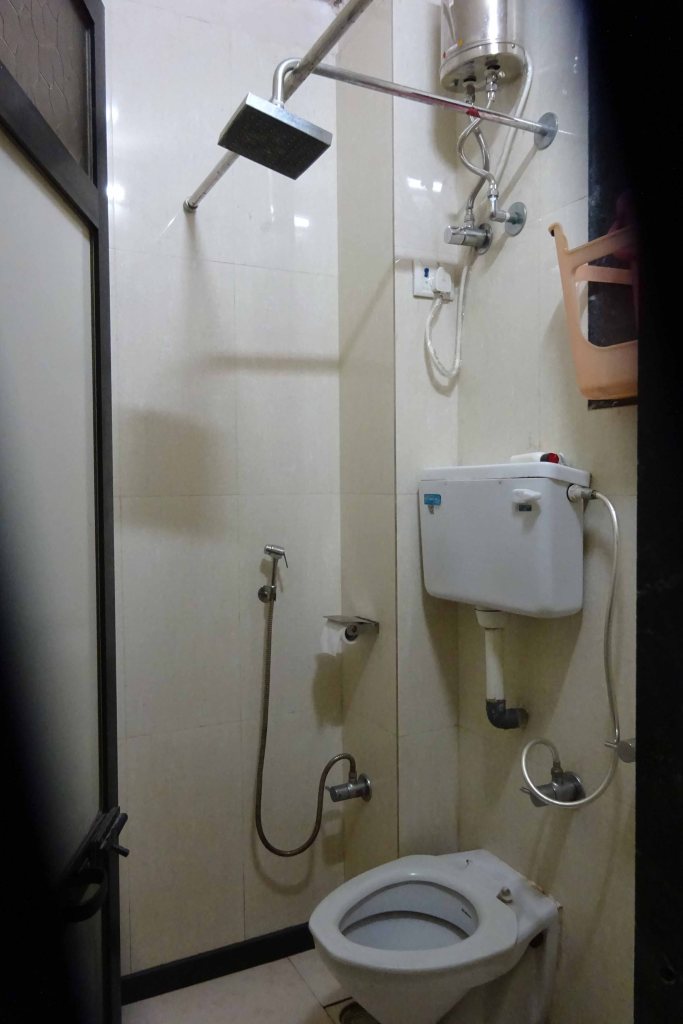