First some geography class for those who didn’t pay attention in school: Do you know the difference between Delhi and New Delhi?

We woke up still pretty shaky from last night but we could not let that scam stop us. We ordered some terrible breakfast on our hotel and started our first day tour on this apocalyptic city. Even with ordering breakfast we could see how service is different here, it took about 30 minutes for our eggs and bread to arrive and we were the only ones eating at the hotel!

Because of yesterday, we decided we are going to have a private driver to take us around the sites, we didn’t want to bargain with corrupt taxi drivers each time we needed transport, and taking the metro was cheap but crowded and dangerous. The full day private car was $20, decent price to guarantee safety and comfort.

Delhi is a sensory overload, the sounds, the smell, how crowded it is, the things you see that are normal here but would never happen in a civilized world. There are elephants, cows, rickshaws, motorcycles, cars, buses, pedestrians, stray dogs, and other weird shit sharing the roads, this makes driving here an experience. Our driver had a sticker that reads “This taxi respects woman”, I don’t know if I should be happy that Sarah is safe with him, or terrified for the rest of India.

Our first stop was the famous Delhi Red Fort. The Red Fort was the residence of the Mughal emperor of India for nearly 200 years, until 1857. Constructed in 1648 by the fifth Mughal Emperor Shah Jahan as the palace of his fortified capital Shahjahanabad, the Red Fort is named for its massive enclosing walls of red sandstone.

The entrance of the fort still has the original bazar stands from hundreds of years ago where they used to sell spices, clothes and food. Now it is just Chinese made souvenirs and fake gold jewelry.

After Indian Independence the site experienced few changes, and the Red Fort continued to be used as a military cantonment. A significant part of the fort remained under Indian Army control until 22 December 2003, when it was given to the Archaeological Survey of India for restoration. 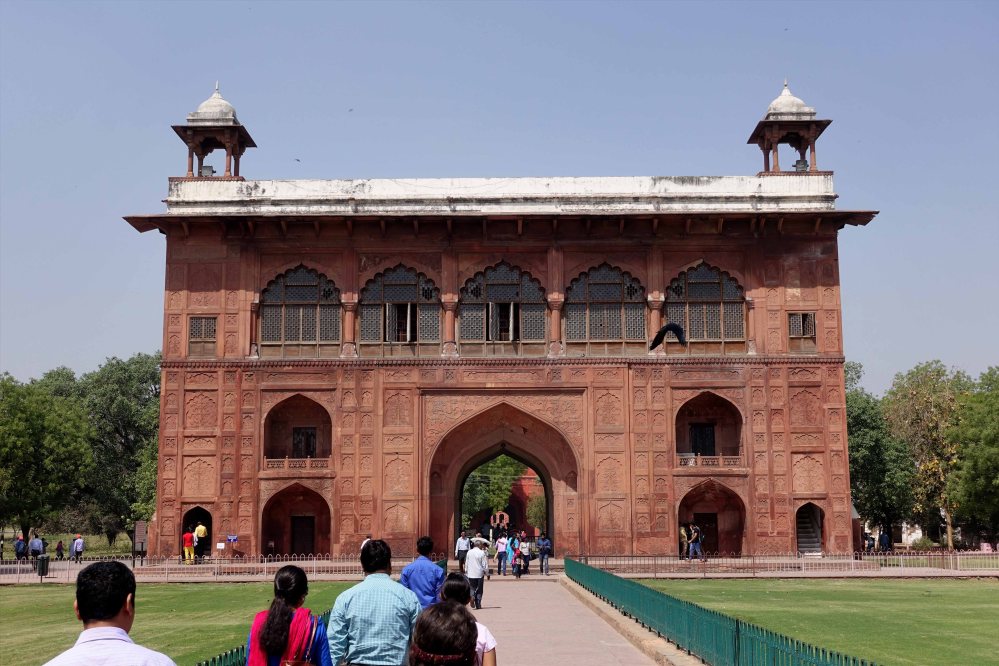 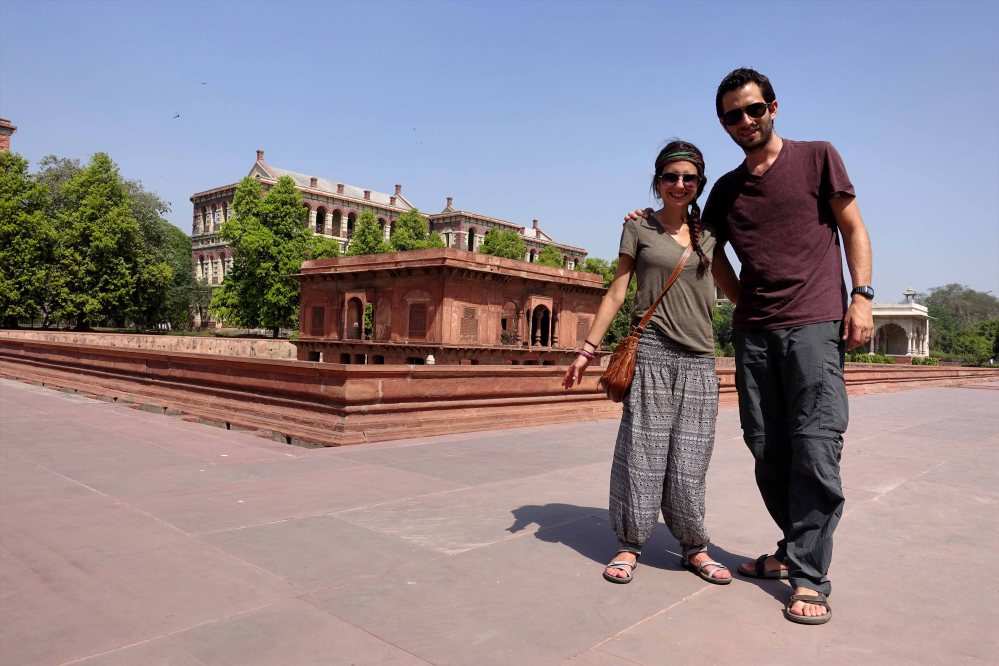 The fort area is huge encompassing several historical buildings, museums and gardens. It felt so peaceful to walk around here after seeing the end of the world outside these walls.

The temperature in India this month and May is insane, people will call us insane to travel here this time, but when traveling 6 months around the world, it is hard to be in every place in the perfect weather. Temperature today: 112 degrees Fahrenheit. We have drunk enough water today to save the California drought.

Our next stop was the Raj Ghat, a memorial to Mahatma Gandhi. It is a black marble platform that marks the spot of Mahatma Gandhi’s cremation, “Antyesti” on 31 January 1948, a day after his assassination. It is left open to the sky while an eternal flame burns perpetually at one end. It is located on the banks of the river Yamuna.

The stone says “Hey Ram” which translates to “Oh God”. These were his last words before dying.

People from all corners of India come to pay their respects to the father of the nation. Its really interesting to see the difference in clothing and styles of the different regions in India.

Our nice driver invited us to his brother’s wedding. We were tempted to go, but at the end we chose not to go. Why you ask? Isn’t all white people’s dream to go to an Indian wedding? Yes it is, but I can explain…. We were still too fresh in India, after having the scam last night we didn’t trust anybody, we didn’t even trust each other, what if Sarah was in cahoots with the Indian mafia? You never know. We googled it  this was a scam and didn’t find too much. But our decision was smart; we just didn’t want to risk it. Then we casually told the hotel guy (the driver’s boss) about the invitation and we told him we were not going, he seemed fine, until he revealed the truth the next day.

We were having chai tea with our hotel guy, he was basically explaining every scam in India and how to stay safe. He then explained how he punished our driver for inviting us to the wedding. The problem here is that the invitation is not a scam (he was a man with a good heart); it’s the danger of bringing a girl to such an event. There have been cases of western couples that get invited in a nice way and they decide to go. During the wedding the other Indian guests get drunk and assault and beat up the guy, and then take the girl and rape her. He told us other stories of 2 European girls gangbanged in a rural wedding after they innocently attended. These drivers come from poor families, he explained. In their weddings being a foreigner will get you all the attention, but they also don’t know how to behave. Remember, India is the rape capital of the world. So from now on, we do not trust anybody (it’s not like we trusted them before). It really takes away some enjoyment of traveling in a place where you cannot trust its people.

Now back to sightseeing the Landfill (AKA “Delhi”). We visited the India gate in New Delhi; this wannabe Arch de Triumph is a memorial to 82,000 soldiers of the Indian Army who died in the period 1914–21 in the First World War. 13,300 servicemen’s names, including some soldiers and officers from the United Kingdom, are inscribed on the gate. 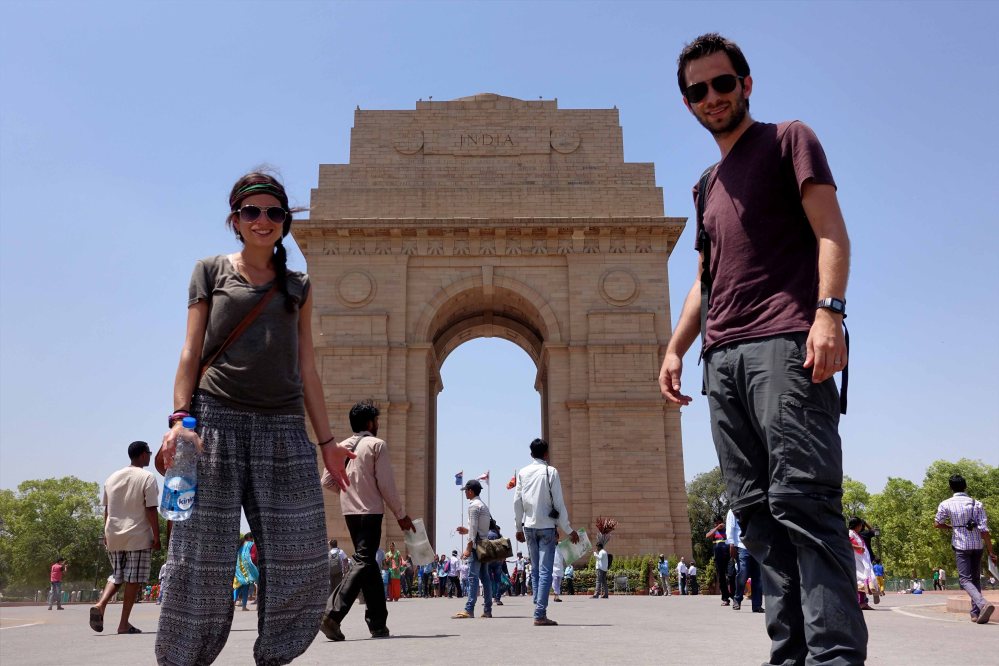 We spotted 2 peacock police officers that agreed to a picture. No idea why they dress like they want to attract some females mates, but they look pretty cool.

From the India Gate you can take a beautiful street called Rajpath that takes you all the way to the presidential palace. This is a clean, ample street with incredible architecture. You cannot go inside the president house unless you have a reservation which we didn’t unfortunately.

Our next stop were the Lodi Gardens, this is where young couples go have their dates to escape the city. We were surprised of how well maintained and beautiful the grounds are. There are 2 extremely old mosques inside that took our breath away.

The Bara Gumbad was constructed in 1490 during the reign of the Lodhi dynasty (2 years before the discovery of America for those who failed their History class as well as the Geography one). it is believed to have the earliest constructed full dome of any building in Delhi. 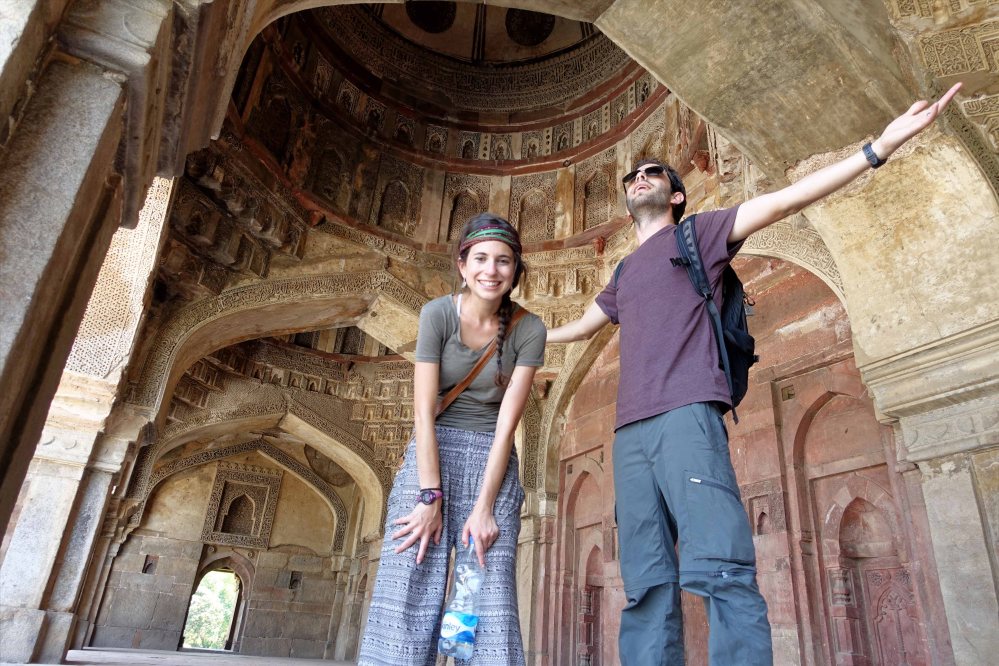 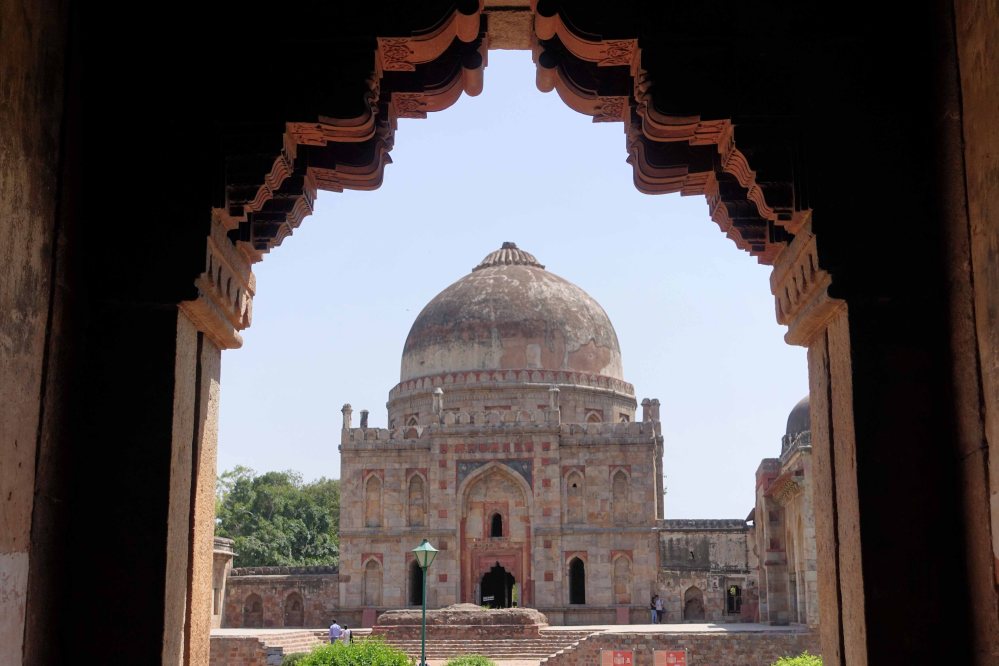 People in Delhi dont look happy, they do not act happy. Nobody smiles, not even in pictures. Here one family asked us to take a picture with us, you can see the happiness on their face when we agreed!

There is another tomb close by, impressive as well.

We were starving, so of course we went to eat my favorite cuisine in the world (sarcasm here)!! This restaurant is a tourist one, the type of restaurant that gives commission to the drivers that drop off white people here to eat. Perfect!! Exactly what we need, they cater to tourism and they have the Trip Advisor sticker on the door (always a good sign in this part of the world), we will survive this time!

Editor’s Note: Because of the obvious great visual appeal of most of Indian food, we will use the word “diarrhea” to refer to the different dishes during our 5 week trip in India. Don’t forget it!

Back to the restaurant, we got 2 small diarrheas, one brownish with mushroom and one red with potato and paneer (cheese). The mushroom one was great and the rice very tasty! I guess I underestimated the food here. 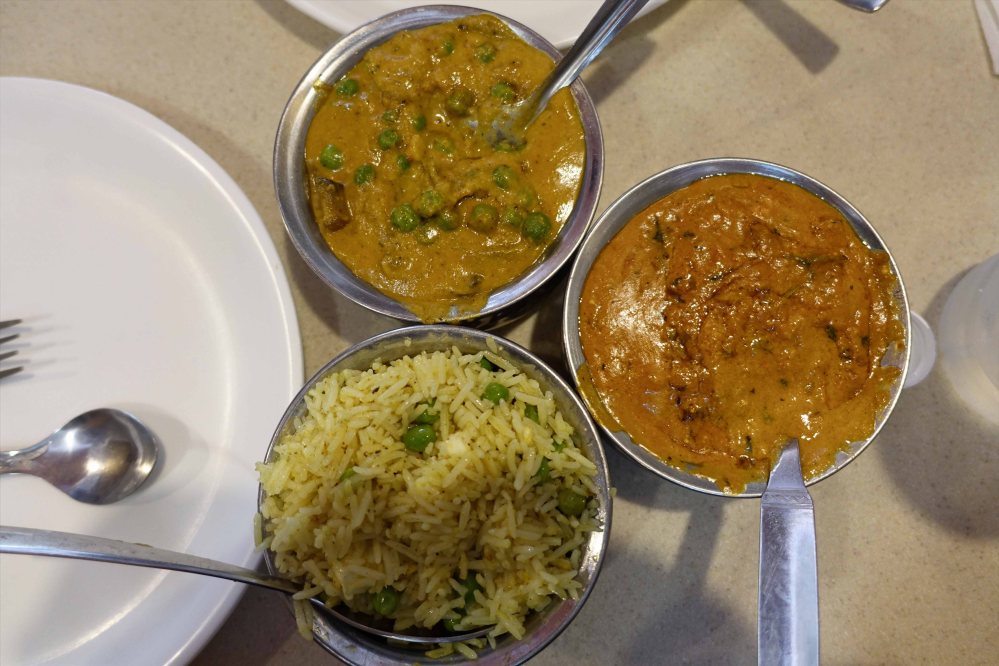 I then I asked the driver if he can take me somewhere where I could buy a cheap phone, I needed it to prevent another scam and being able to call my real hotels. They required another passport photo which I didn’t have, so we went to a studio to get some! My Samsung phone costed me $20, so cheap, but I guess they scammed me with the sim card as it is 3 days now and still can’t be activated. Boooo!

We went to took a nap at the hotel, sightseeing in the heat is exhausting. At night, we walked to a Punjabi (north India) to get some food. This time we wanted something different, something unique from the region of Punjab, so we got 2 diarrheas, one yellow with cheese and a red one with vegetables. To our surprise they tasted the same as everything else we have tried here (sarcasm again).

As you could see here, Delhi has many incredible things to visit. The monuments and tourists attractions are impeccable, extremely well maintained and cleaned, super interesting and filled with history. But it is a shame that they are inside this shithole of a city. Everybody says Delhi is the worst of India, so we are excited to go visit the other cities, but we still have 2 more sightseeing days here (that were amazing, posts to come)

Bonus Pic of The Day: Everything in India is inefficient. We hired our driver to take us to the sights around Delhi, but that didn’t stop him to park the car where his friends where chilling and stay 20 minutes talking to them. Each time he introduced his friends to us at least, this happened like 4-5 times in that day. 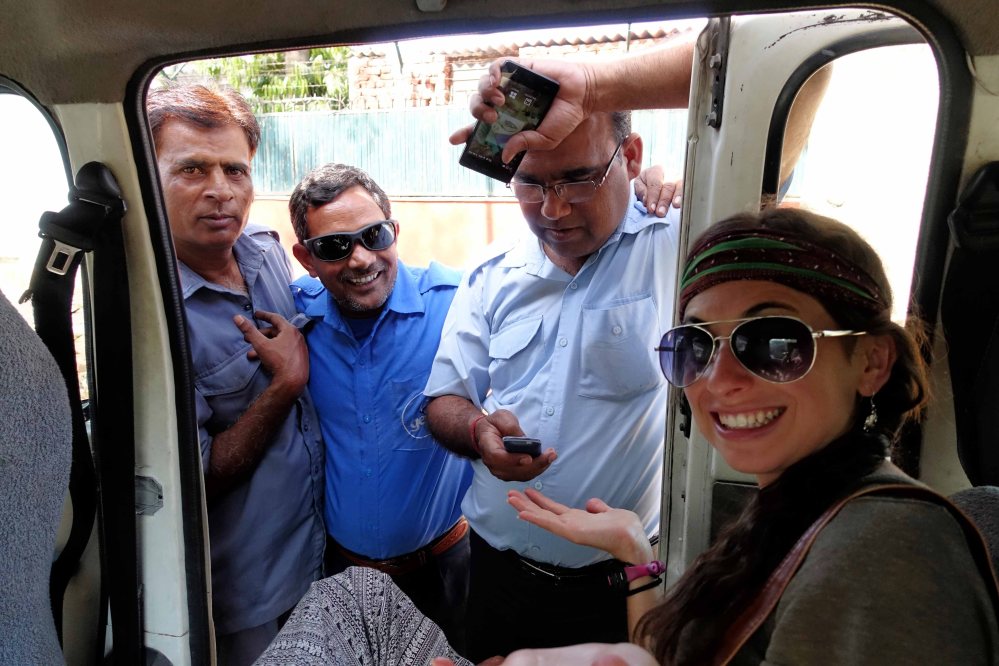