Our last day in Samui was pretty relaxing. We just spend a couple hours in Chewang Beach and then we got an amazing traditional Thai massage. I (Eitan) classify massages in 2 categories:

1) Gentle rubbing that helps you reach nirvana in around 1 hr.

2) Rubbing that could be used as a torture method during the inquisition.

After being laughed at by the whole staff for being very hairy, this massage started like category number 2, but after screaming and being called “a baby” by my masseur, she lowered the intensity and became the best massage for me so far. The Thai massage includes these lucha libre moves at the end that I find pretty hilarious and incredible dangerous as it can probably get you paraplegic in a second, luckily we survived this one. 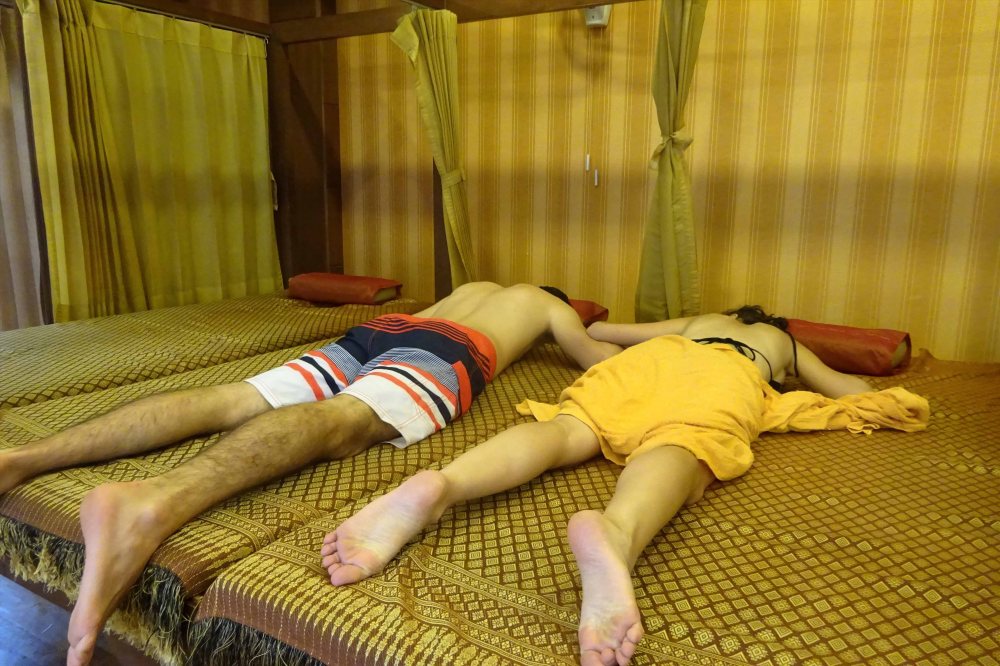 During the massage you could hear these terrible trucks from hell blasting their announcements of Muay Thai fights every 5 minutes. It really becomes annoying because the volume of these things is so loud you can hear it km’s away. 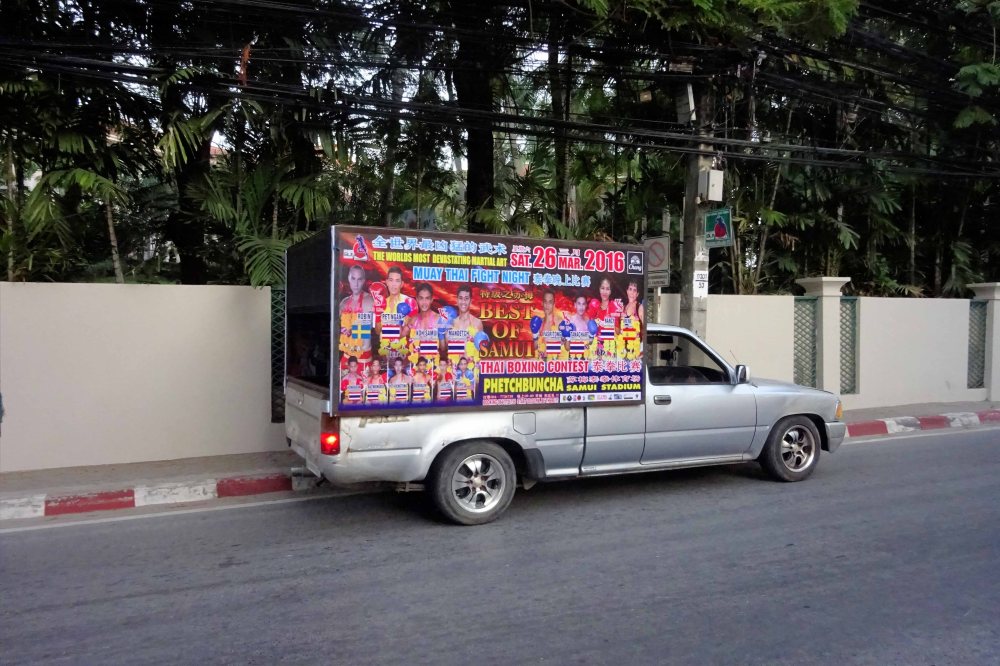 After eating a pizza and a salad from the wine bar, we met by pure luck with this amazing German couple that we had previously met in Koh Phangan. We went to get a last drink with them at Soi Green Mango as they were heading back home the next day. 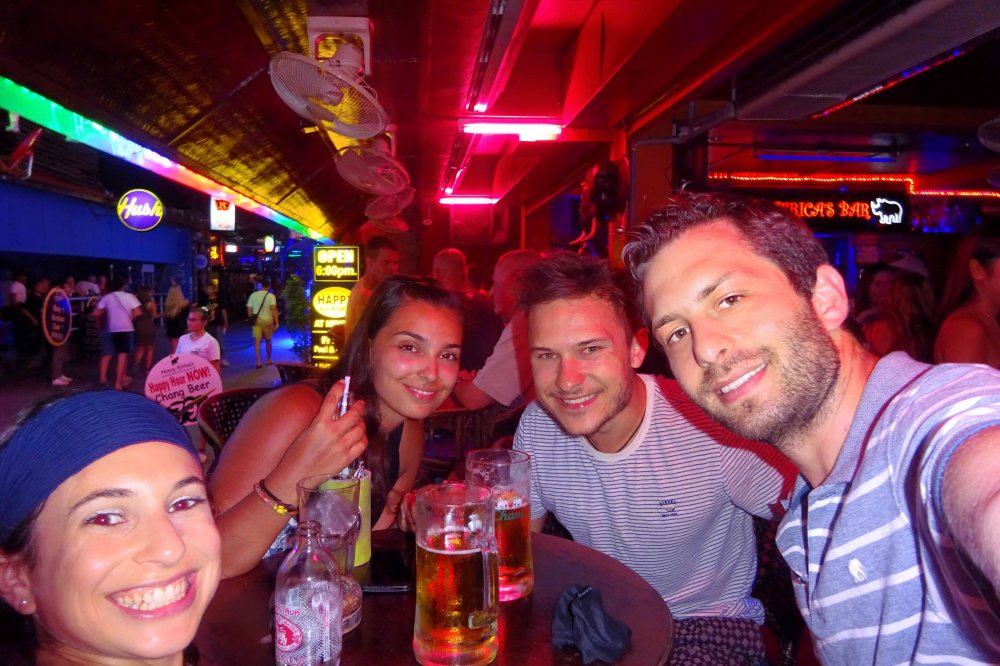 The next morning we woke up at 5am to head back to Bangkok.  While waiting for our cab we saw a lady boy (this is the term openly used in Thailand) enter our hotel , I guess someone was craving some fun at the early hour while we were exhausted.  It was a long day of a cab ride, then a ferry, then a bus ride, an hour flight and then a cab to our hostel. Apparently in Thailand they don’t like you to leave your pee there, so they politely ask you to take your urine back.

This hostel was very nice even though we had to share bathrooms.  They kept it so incredibly clean. 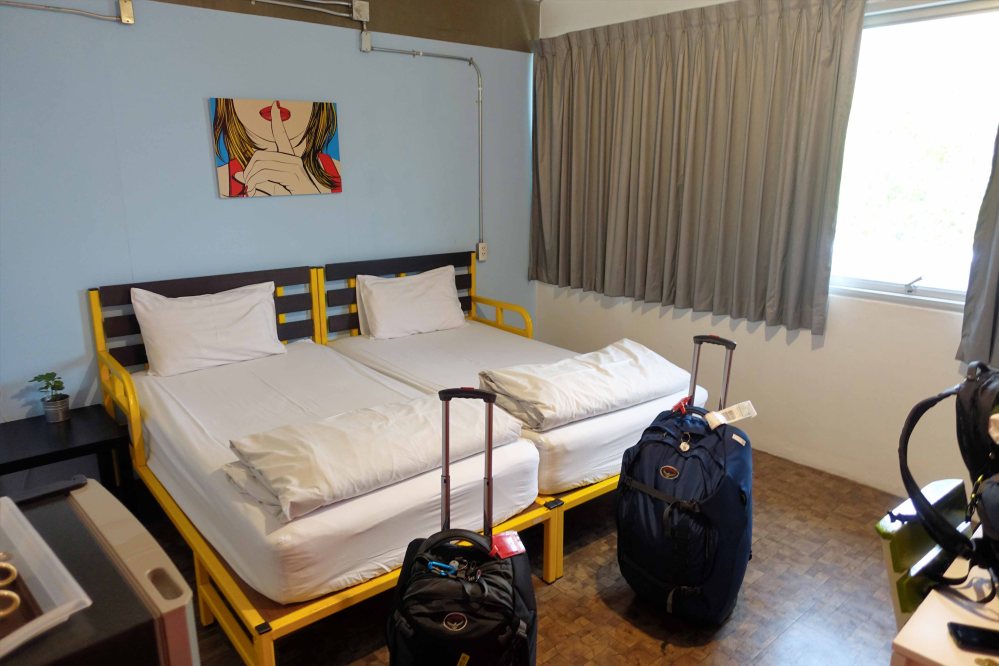 We were hungry after our long journey and found that one of the best rated restaurants in Bangkok was walking distance to our hotel so that’s where we went.  It was a small, not pretentious place and Eitan ordered probably the best thing we have tried the entire trip. “Waterfall Beef”, It was this beef dish with soy sauce, oyster sauce, lime and other vegetables and it gets the name from the sound the sauces make while its being cooked. After lunch we were exhausted so then took a nap before exploring Bangkok.

We went to a trendy area known as Sukhumvit Soi 11 where all the new hipster bars are located. We ate dinner at a cute and popular place where we sat on the floor and were disappointed to see that the prices of things in Bangkok are just as much as the islands.  Eitan couldn’t believe how much pricier Thailand has become since he was here 5 years ago (probably a little less than double).  We walked around the area and found ourselves in this very neat Egyptian area where we got to have fresh baklava and amazing mangoes and dragon fruit. After walking for a bit around that area called it a night. (Thank Sarah for forgetting the camera tonight, so no photos).

Bonus Pic of The Day: Every time you are walking to see where to eat and you stop to see a menu, you will have at least 1 waiter show up and awkwardly stand inches from you without saying a word, just awkwardly looking at you, making you uncomfortable as hell. I don’t who is training them to do this but we decided to never eat in a place that does this. In this photo, Sarah is awkwardly watched by 2 waiters while she looks at the menu